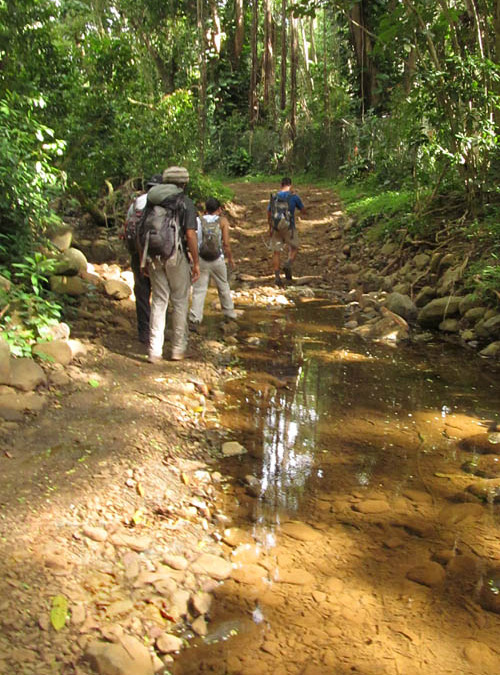 We climbed the Waikane Trail to Puʻu Kaaumakua, hiked the Koʻolau Summit Trail to Waiāhole Uka and descended into Waiāhole Valley.

Pete Clines, August Smith, Cory Yap, Reanne Solomon, and I met at the Hygenic Store in Kahaluʻu before proceeding to the South Fork of Waiāhole Valley Road where we left two vehicles.  We then drove to Waikane and parked near the intersection of Kamehameha Highway and Waikane Valley Road. 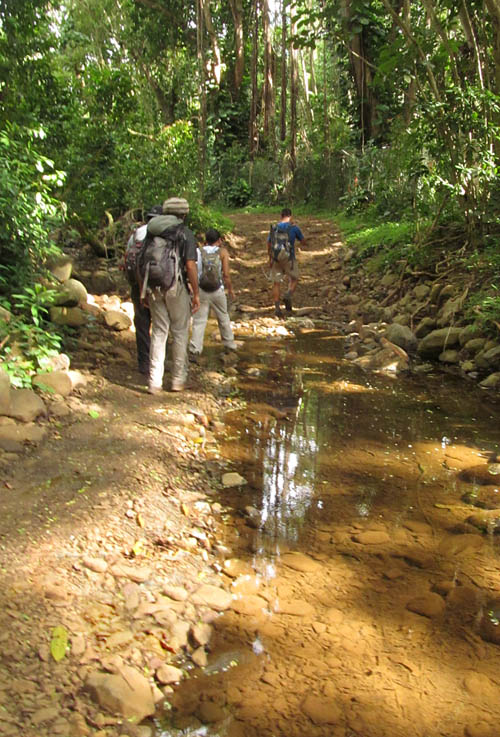 The morning was bright and sunny as we walked up Waikane Valley Road and then took the dirt road that runs along side Waikane Stream for part of the way. 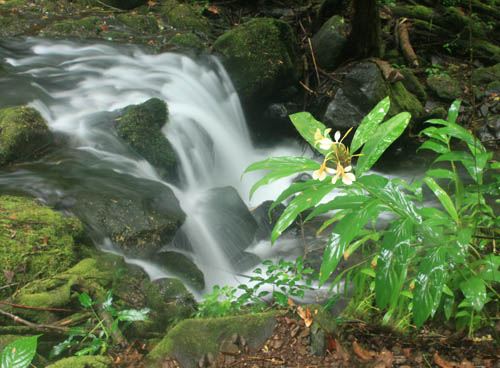 After crossing the stream we contoured around one last bend in the road before finally reaching the start of the Waikane Trail. 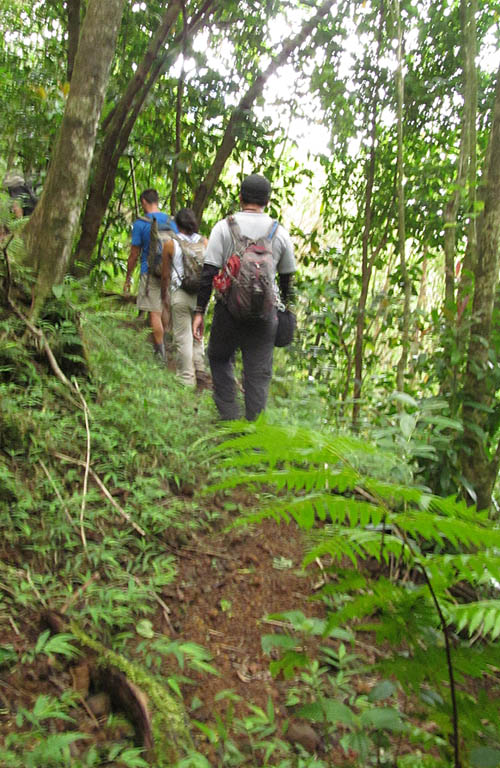 Much of the Waikane Trail is part of the old Waiāhole Ditch Trail from Kahana to Waiāhole that services the system of tunnels and ditches which diverts water from the wet windward-side of Oʻahu to the parched leeward-side of the island. 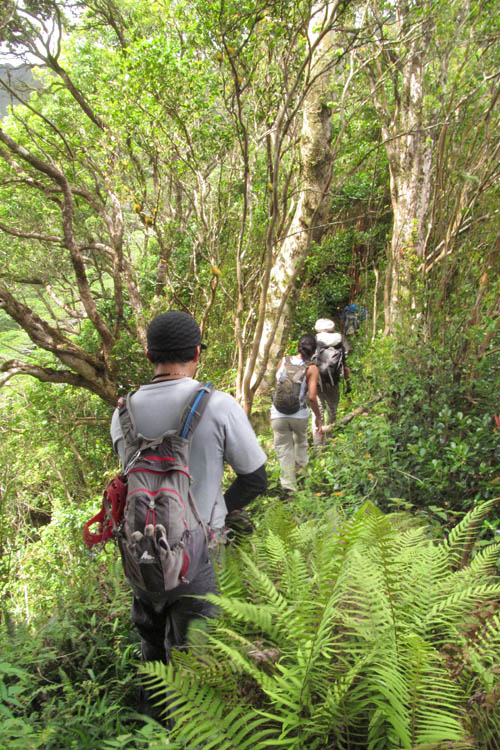 When we took the sharp left turn that contours against the wall of Kahana Valley, I recalled that this section of the trail was built by the US Army to connect Schofield to the Waikane Trail.  If Oʻahu was invaded the trail could be used to transport men and material from Schofield Barracks over the Koʻolau Mountains to the windward side of the island. 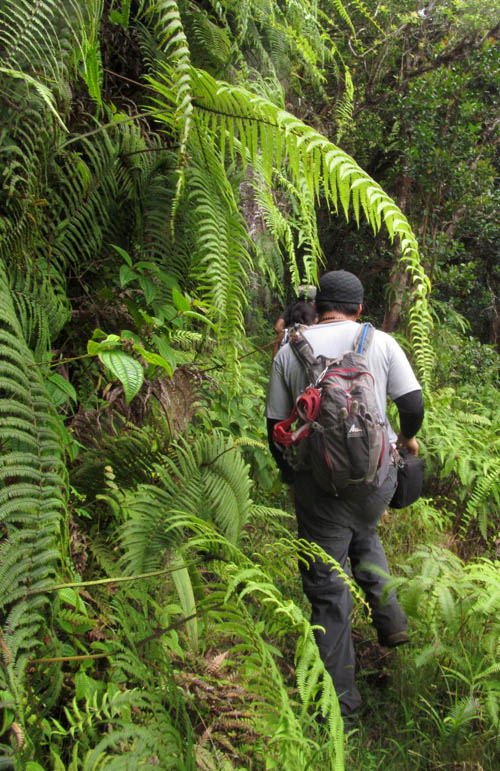 The trail was in decent shape thanks to the trail maintenance crew of the Hawaiian Trail and Mountain Club who cleared the trail a little less than a year ago.  But invasive ginger grew back fast and we took out our machetes to chop back the new growth. 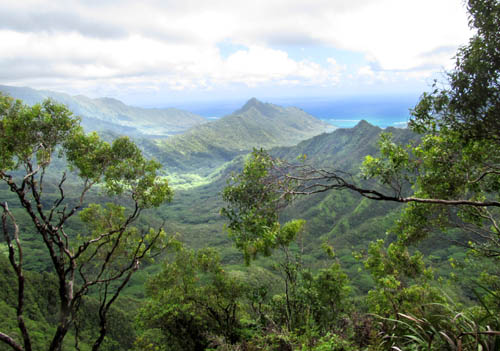 We gained elevation on the contour trail, turned the corner around a ridge, we were treated to magnificent views of Kahana Valley. 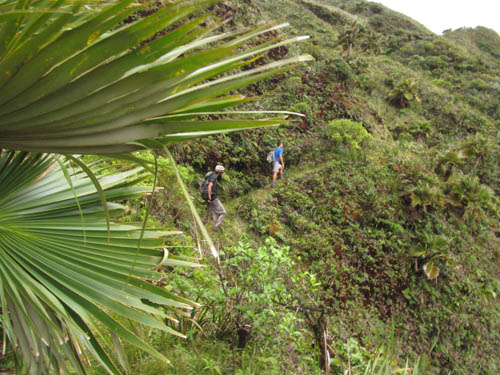 After gaining additional elevation, we saw a number of native loulu palms (Pritchardia martii) which thrive along this stretch of the northern Koʻolau Mountains. 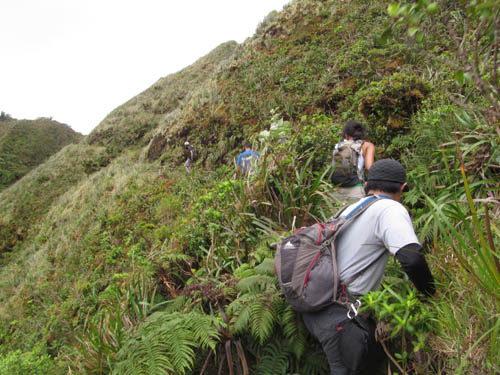 When we reached the junction with the Koʻolau Summit Trail (KST) — marked by a rusty metal stake — we made a sharp left turn, and contoured in the opposite direction. 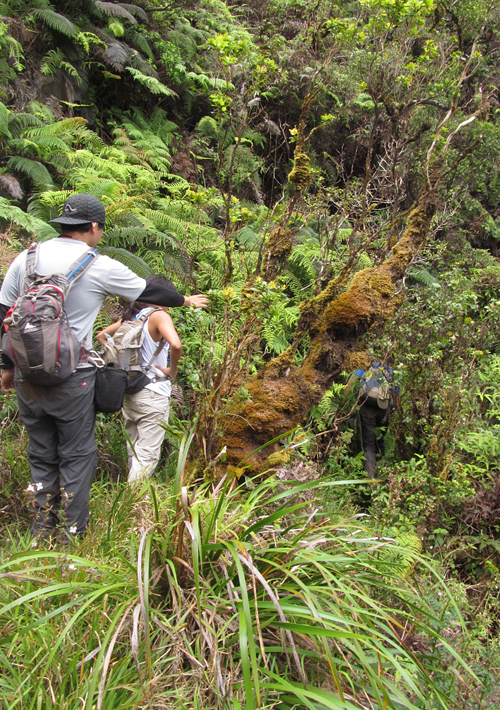 We crossed over to the leeward-side of the KST and contoured passed a number of ʻōhiʻa trees covered with moss until we reached the gully that climbs to the summit of Kaaumakua. 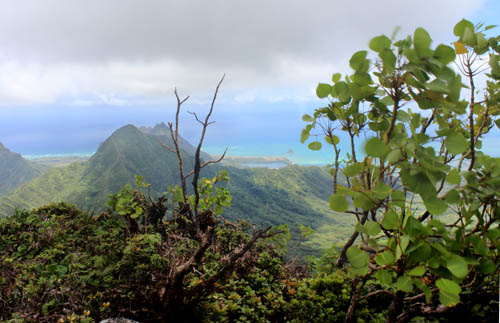 When we reached the summit of Kaaumakua at 2,681 feet elevation we admired the view of Kānehoalani, Ohulehule, Manamana, Puʻu Piei, and other peaks overlooking the Koʻolauloa coast.  The wind was strong so we put on our jackets to retain body heat as we took our first lunch break. 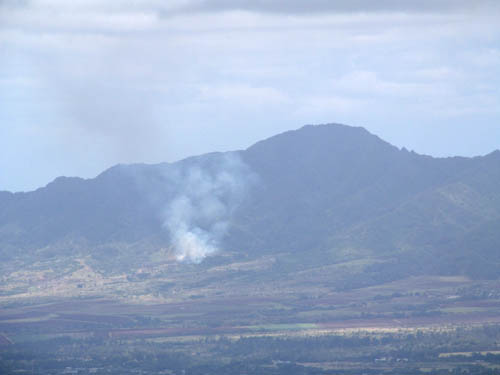 When we looked towards the Waiʻanae Mountains we could see the smoke from a fire near the foot of Puʻu Kaua and hoped the fire department could quickly extinguish the flames. 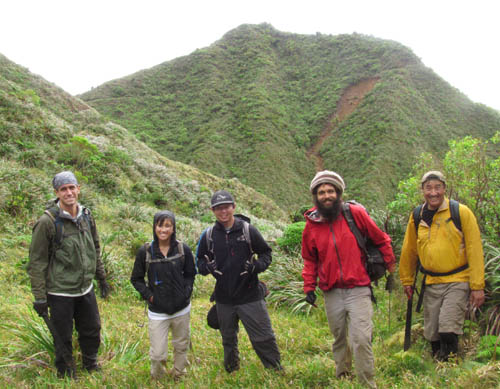 Just before pushing off for Waiāhole Uka, we took this group shot on the KST — from left to right: Pete Clines, Reanne Solomon, Cory Yap, August Smith and me. 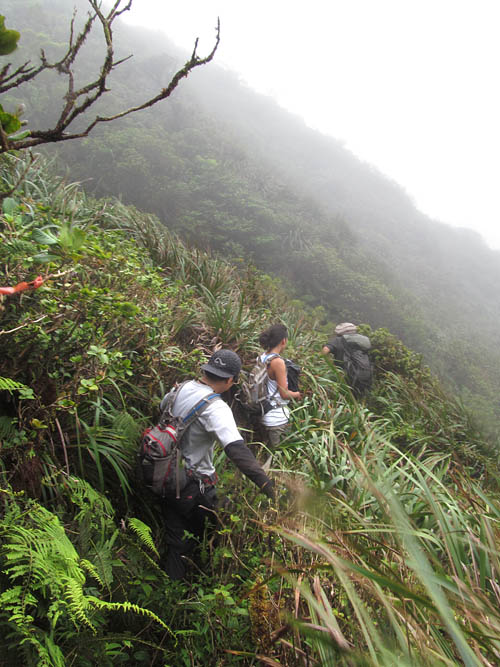 Clouds dropped down and soon we were hiking in the mist.  But it never rained so we continued on our merry way, hacking at the uluhe, ʻuki, and other vegetation that blocked the way forward.  We reopened this stretch of the KST one year ago and were pleased that the swath was essentially still there.  We hacked at what grew back to keep the trail open. 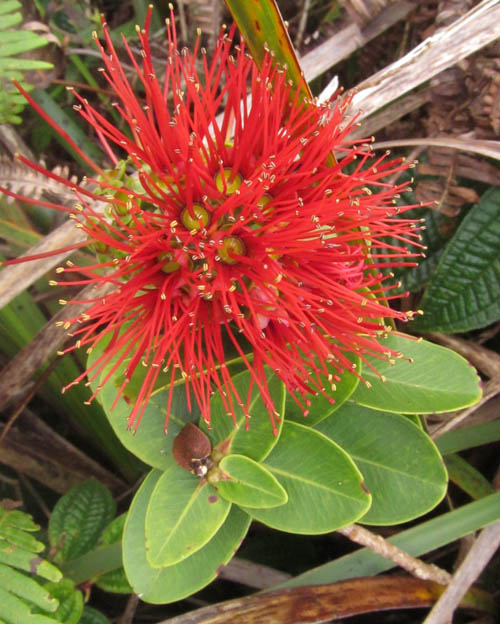 We saw a number of red lehua blossoms as we contoured in and out of countless folds in the mountains. 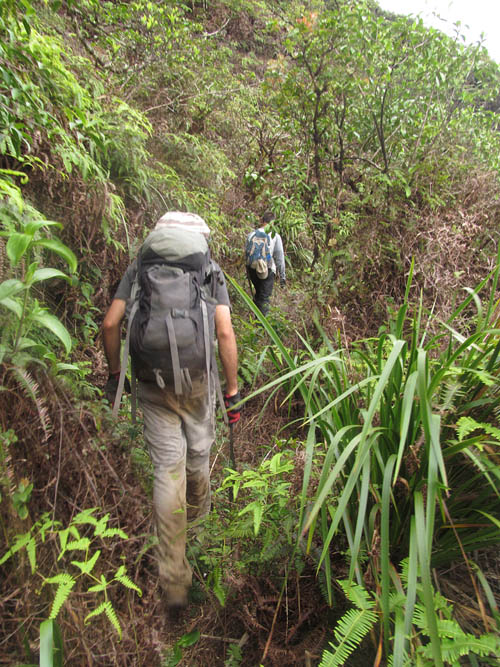 Unfortunately, we did not have enough time to clear the last uluhe blockage along this stretch.  So we had to circumvent the obstruction by climbing up to the Koʻolau Summit Ridge and hiking along the edge for a short distance — probably about a tenth of a mile — before descending back down to contour on the KST.  We need to send a crew up to blast through this last uluhe blockage on this section of the KST.

Whenever we hiked on the wind-blown windward-side of the KST, we admired the greenswept valleys of Waiāhole, Waikane, Hakipuʻu, Kahana and Punaluʻu.  Thanks to the foresight of land use planners 50 years ago, these valleys have remained untouched to development. 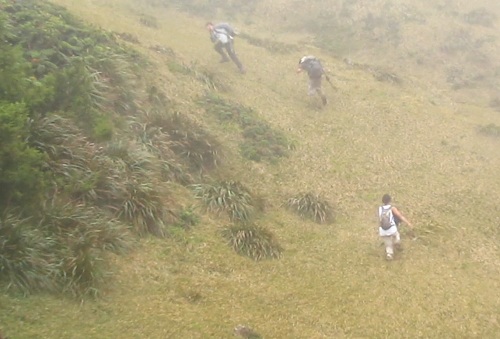 When we reached the “wind funnel” — where the mountains funnel the wind into a narrow passage — we literally ran right smack into gale force winds!  Gale force winds are sustained surface winds between 39–54 miles per hour — tropical storm strength.  The wind was so strong that we had to run full speed into the funnel to make any head way! 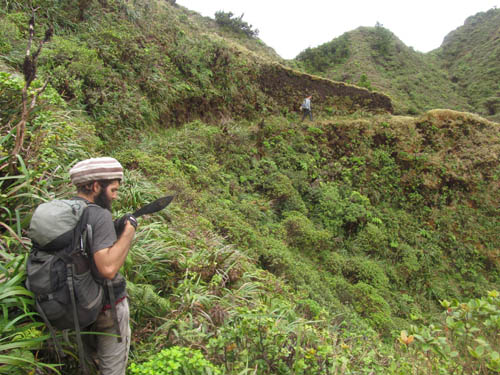 We were pleased when we reached the notch in the ridge — we knew we were close to the sugi pine grove and the summit of Waiāhole Uka. 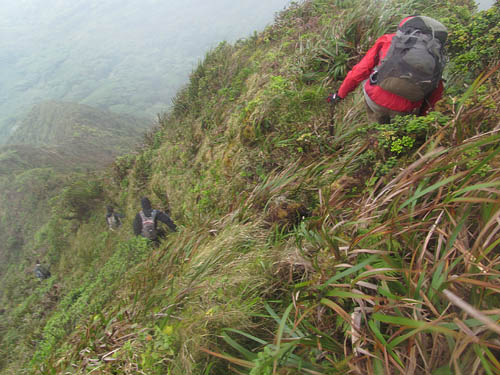 The wind howled at the summit of Waiāhole Uka, so we did not stay long on our second lunch break.  With the afternoon drawing to an end we began the steep descent down Waiāhole Uka ridge which was pioneered by Dayle Turner and Ed Gilman in 2002. 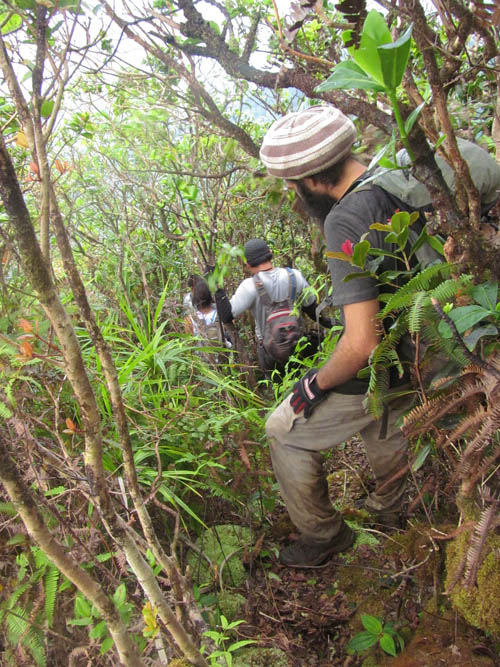 Although the ridge is steep, ʻōhiʻa and other trees provide much needed handholds and foothold which makes the route doable. 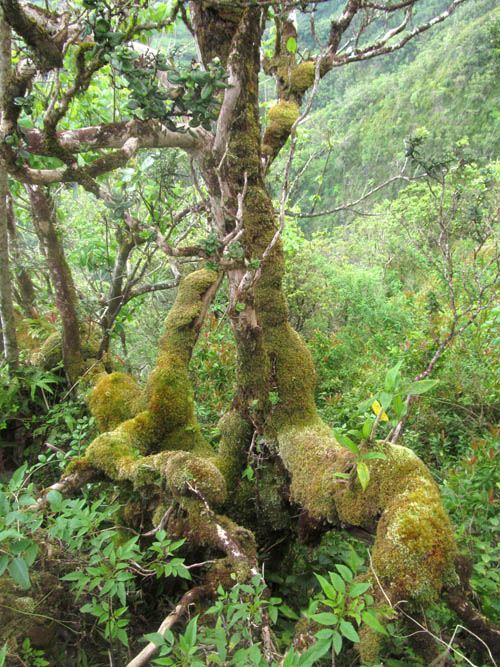 Ropes, straps, and cables enable hikers to ascend/descent the steepest part of the ridge.  Although they were strongly anchored to moss covered ʻōhiʻa trees, the climbing aids were too oxidized and frayed to trust so I did not put my entire weight on them as I descended. 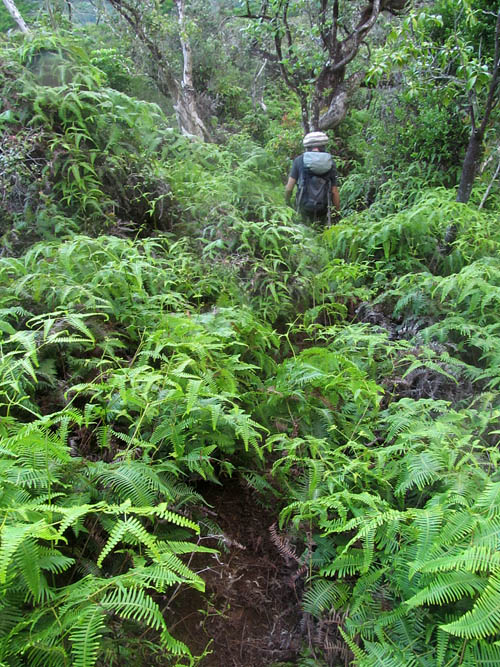 When we reached the uluhe slope, I was pleased that the swath Joshua Serrano and I kept open about 9 months ago still exists — although the unruly ferns are making a comeback. 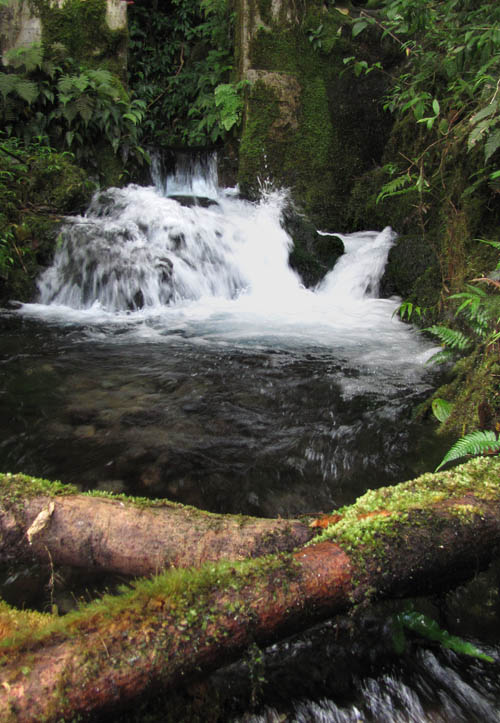 We were pleased when we dropped down onto the Kuolani-Waianu Trail and made our way in and out of several gullies until we reached the man-made waterfall. 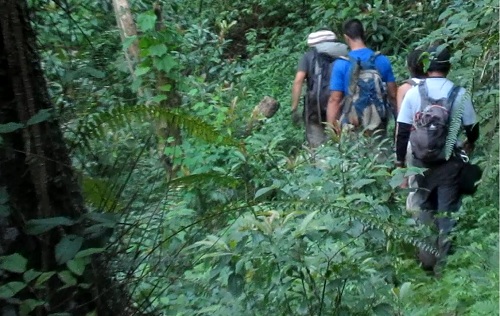 With daylight waning, we put on our head lamps on the final part of our trek that would take us through thick stands of bamboo and other vegetation which blocks all light.

While making our way through the darkness, I reflect on the great time we had hiking for 11 hours, admiring spectacular views of the northern Koʻolau Mountains, seeing a bunch of cool native plants, and running into gale force winds.  What a great hike!