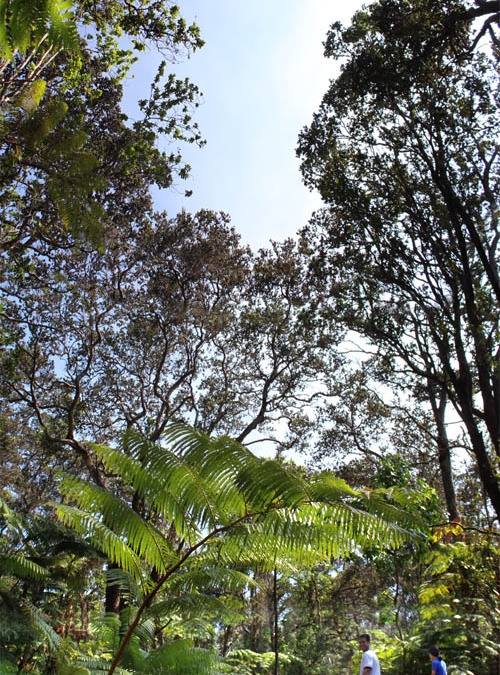 I joined 10 friends from the Hawaiian Trail and Mountain Club (HTMC) for 3 days of hiking in Hawaii Volcanoes National Park on the Puna Coast of the Big Island.

Our plan was to backpack the wilderness area to the campsites at Keauhou and Halape.  But since the sun can be brutal on the barren lava fields at mid-day we decided to wait until 2 pm to start.  We further decided to pass the time at Thurston Lava Tube which has a unique connection to HTMC. 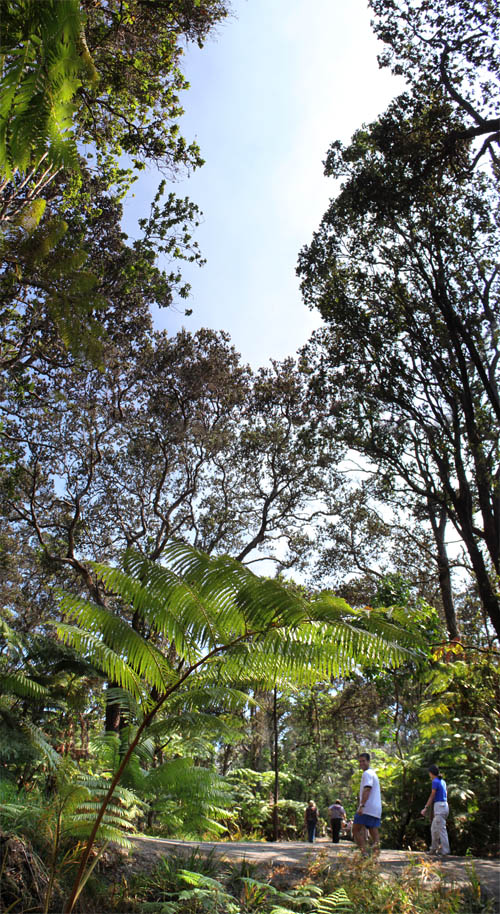 Thurston Lava Tube, also known as Nahuku in Hawaiian, is a popular visitor destination on the Chain of Craters Road.  The cave is located at the 3,900 foot level of Kilauea in a native rainforest of ohia lehua trees (Metrosideros polymorpha) 80 feet tall with hapuu tree ferns (Cibotium glaucum) in the understory.  A steady stream of visitors walk the 20-minute stroll all day long and make Thurston Lava Tube the most visited lava tube in the world. 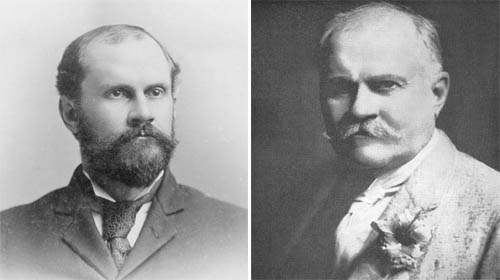 Thurston Lava Tube is named for Lorrin A. Thurston who discovered the cave in 1913 and was HTMC’s first Vice President.  Recognized as “father” of Volcanoes National Park, Thurston lobbied tirelessly for 10 years to get Kilauea, Mauna Loa, and Haleakala in the national park system.  A grandson of the first missionaries to Hawaii, Thurston distinguished himself as a prominent lawyer, politician, and businessman.  In 1893, Thurston lead the overthrow of the Hawaiian monarchy and founded the Provisional Government that paved the way for Hawaii to become a Territory, and then a State, of the United States.  Publisher of the Honolulu Advertiser, Thurston owned the Volcano House on the rim of Kilauea Caldera, and enaged in many government, business and community endeavors far too numerous to list here. 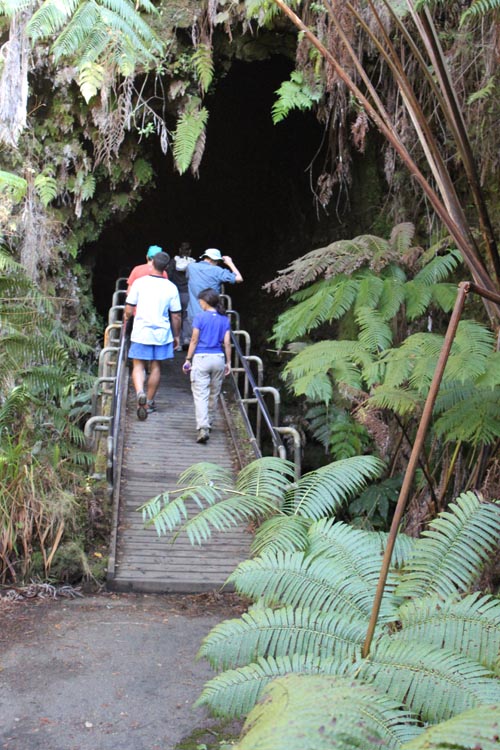 Thurston’s young niece — Margaret B. Shipman — speculated that a subterranean cave near her house had an outlet nearby and convinced Thurston to search the heavily forested area.  One fateful day in 1913, with the help of his niece and Dr. Thomas Jaggar, the scientist from Massachusets Institure of Technology who created Hawaii Volcano Observatory, Thurston stumbled upon a dark opening at the bottom of a pit crater choked with hapuu ferns and ohia trees.  Returning the next day with a ladder, they descended into the opening and found a large lava tube filled with impressive stalactites and stalagmites.  Unfortunately, these rock formations have long disappeared — taken as souveniers — once the location of the cave became known. 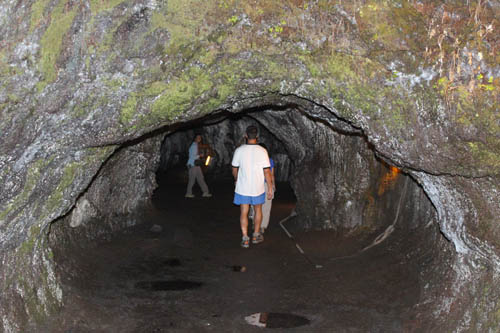 Lava tubes are the plumbing through which molten lava flows.  They are formed when the outer surfaces of a lava stream solidify, creating a hollow tube through which the lava flows.  Because the tube walls and roofs are good thermal insulators, the lava remains molten and fluid in the tube and flows for much longer distances than when exposed at the surface. 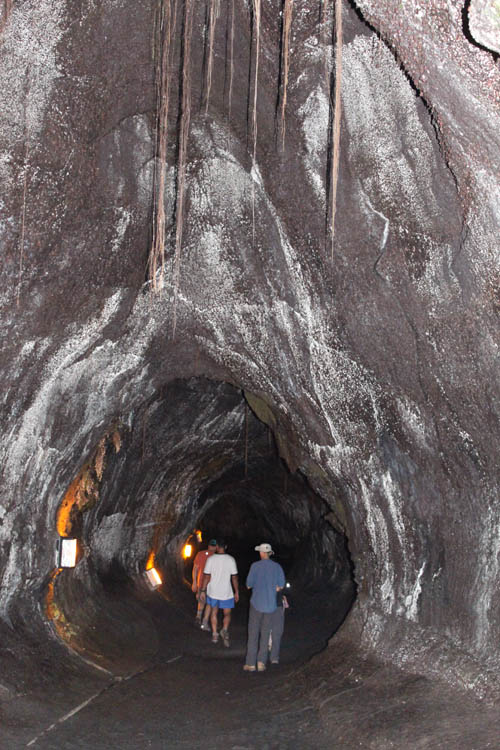 The roots of ohia trees dangle from the ceiling of the lava tube and allows water to drip into the cave.  The roots also form the basis for a community of unique cave-dwelling arthropods, crickets, millipedes, and wolf spiders that evolved in these caves.  Many of these creatures are pale, have reduced eyes, and live off plant and animal matter that fall into the cave from skylights at the surface. 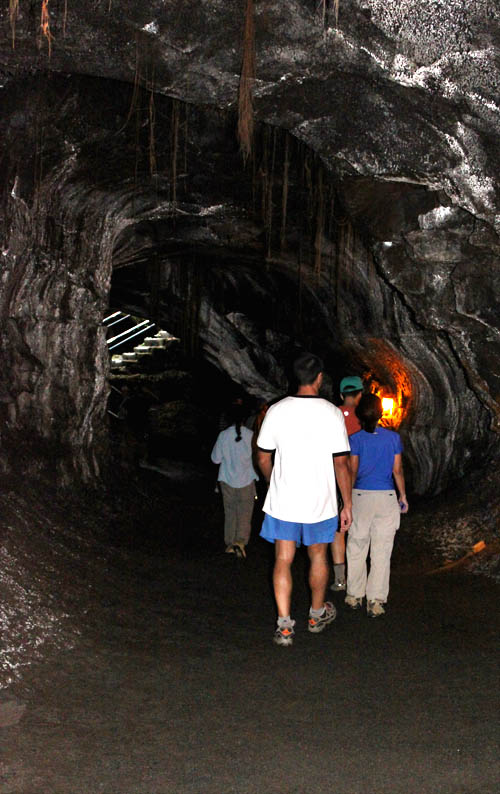 The role HTMC played in the lobbying effort to create Volcanoes National Park is documented in a 1953 article in Nature Notes, a publication of the national park service.

“… William R. Castle [1st HTMC President] became the first person to sound the call for management of the Land of Pele by the Federal Government, Edyth Tozier Weatherred the first to conceive specifically the Hawaii National Park idea, and the Weekly Hilo Tribune the first to report it. But it was Lorrin A. Thurston, one of Hawaii’s greatest men, who for a full decade fanned the sparks that brought this magnificent land into the fold of the National Park System.” 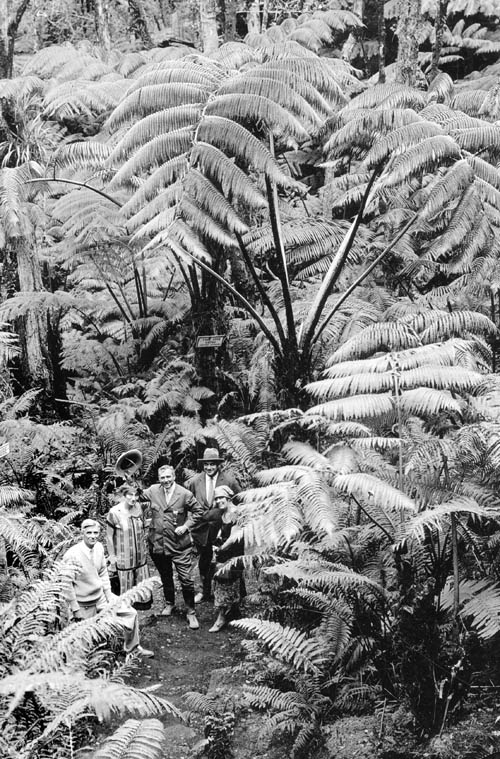 “In January 1911, Governor Frear [charter member of HTMC] sent the draft of a bill to Washington for introduction in Congress to create the proposed “Kilauea National Park.” The bill sought an appropriation of $50,000 of which Frear envisioned half would be used to acquire private holdings and the other half for the construction of roads and other improvements. This bill was suggested to Frear by the Trail and Mountain Club of the Island of Hawaii, which was founded in 1910 at Thurston’s bidding. At his suggestion, the newly-formed club, of which Thurston was first secretary, endorsed the park proposal and stated the establishment of the national park to be one of its objectives.” 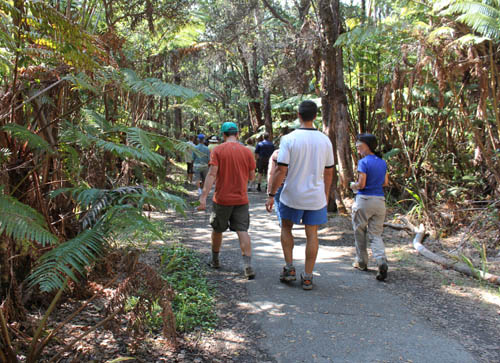 When we climbed out the cool subterranean cave we emerged into the warm sun-lite surface again.  As we looped our way back to the entrance, we heard the calls of native forest birds and saw fleeting glimpses of apapane and iiwi as they darted from one lehua flower to another in the canopy high above. 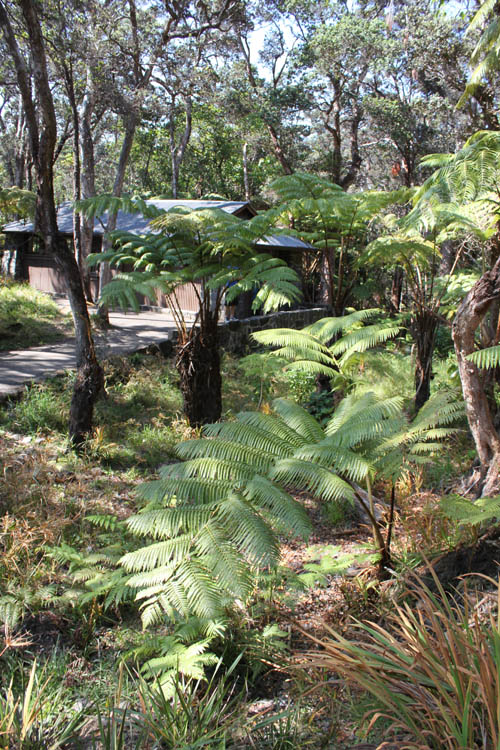 Stopping at the rest house for one last time, we organized ourselves to push off on our 3-day backpacking adventure in the park wilderness.  As I prepared for our trek, I reflected on HTMC’s founding 100 years ago and how Thurston labored to create Volcanoes National Park in 1916.   Thank you Thurston for a great park to play in!

Lorrin A. Thurston, Men of Hawaii, 1921, A Biographical Reference Library, Complete and authentic, of the men of note and substantial achievement in the Hawaiian Islands.