Behind the Snapshots – How the Photos Were Taken

Here is a photo of me on the edge of a narrow ridge that separates the valleys of ‘Awa’awapuhi and Nualolo on the Na Pali Coast of Kaua’I that drops some 2,000 vertical feet to the valley floor below. 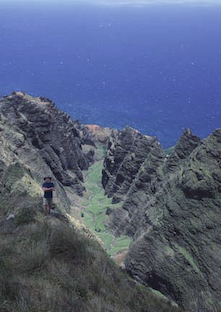 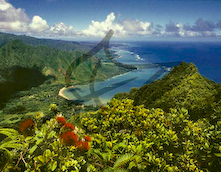 To capture this unusual vista of Kahana Bay on the windward coast of O’ahu, I climbed above Kauhi’imakaokalani, the Crouching Lion rock formation overlooking Ka’a’awa. It involves a strenuous climb requiring considerable cardio-vascular conditioning. The trail gains over 2,000 feet in elevation in a little over a mile. 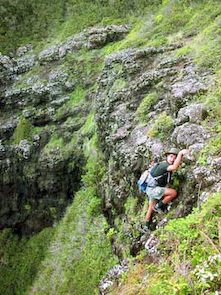 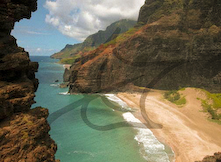 To get this perspective of Honopu Beach and the Na Pali Coast, we launched our kayaks from Haena Beach and kayaked along the Na Pali Coast. Here is a photo of me nearing Hanakapi’ai as we made our way to Kalalau Beach where we camped for 5 nights.

We kayaked from Kalalau Beach around the base of the cliffs to Honopu, anchored off the beach, and swam ashore. We then climbed to the top of the arch at Honopu which is several hundred feet above the beach. Here is a photo of me climbing a steep lava rock cliff to reach the top of the arch, where I snapped the unusual photo of the Na Pali Coast. 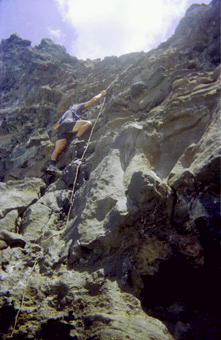 Unusual plant communities live along the crest of Waianae Mountains near Puu Kalena, the second highest peak on Oahu at 3,500 feet. 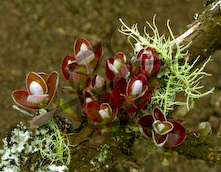 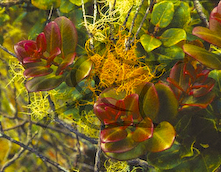 The climb to the summit of Puu Kalena involves a steep heart-pounding ascent to the crest of the Waianae Mountains. Kalena is renown for its dikes. 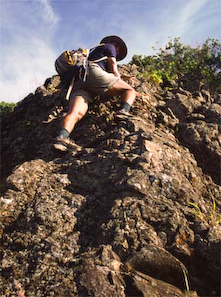 Dikes are formed when magma seeps into cracks in the mountain and solidify before they reach the surface. They are much denser and more impervious to erosion than the rock it penetrates. Over the passage of time, the surrounding softer rock often erodes away, leaving the dike rocks to form sharply defined ridgelines and impressive steep formations. The photo below shows me on a sharply defined dike as it meanders along the crest of the Waianae Mountains-the trail is on top the dike. 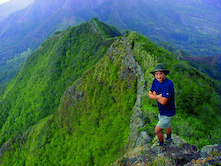 Here is a shot of me on an impressive dike formation with precipitous drop-offs on either side of several hundred feet. A number of unusual native plant communities can be found on this narrow dike off the main trail to Puu Kalena. 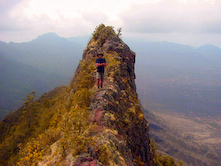