Happy-Face Spiders on the Mokuleia Trail 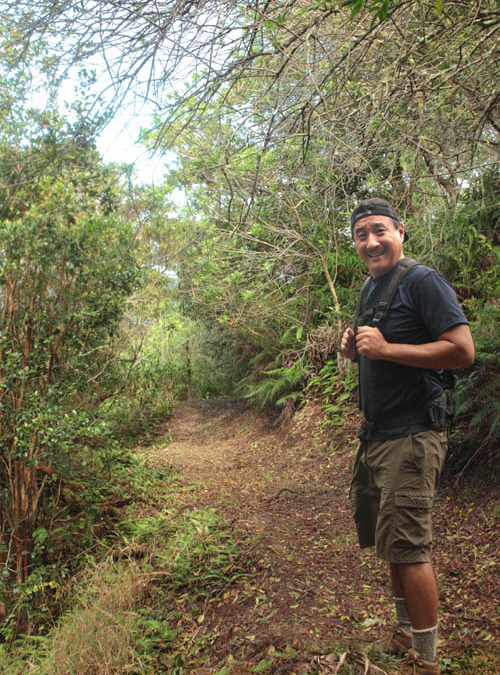 For the past several months, I have been hiking up and down the Mokuleia Trail in the northern Waianae mountains to search for happy-face spiders (Theridion grallator) which make their home on the underside of leaves in the native forest.

The Mokuleia Trail is 3.5 miles long (making for a round trip of 7 miles) and starts in the foothills of the northern Waianae Mountains on a private ranch just beyond Waialua.  The trail gains over 1,200 feet in elevation as it crosses the forest reserve boundary into the Mokuleia Forest Reserve and continues on into the Pahole Natural Area Reserve (NAR). 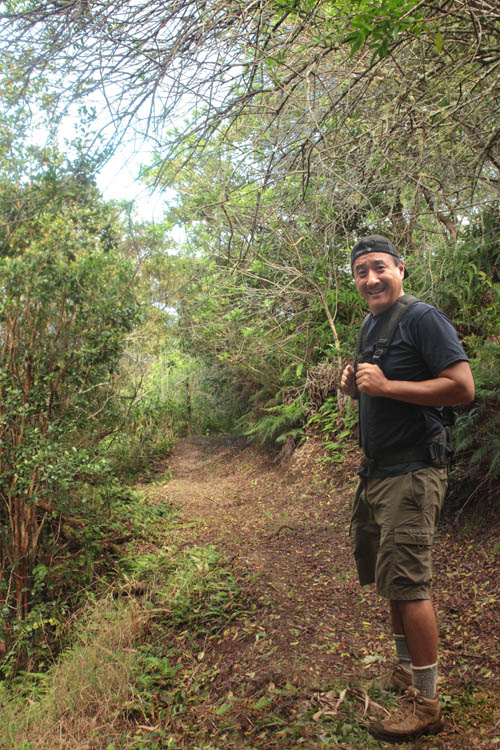 The easiest way to reach the spiders on foot without trespassing is to do the trail in reverse by hiking up the Mokuleia Access Road next to the Dillingham Ranch coconut grove on Farrington Highway.  After gaining some 1,600 feet on the paved road, turn left at the Peacock Flats gate, and continue to the end of the dirt road until you reach the Mokuleia Trail.  This end of the Mokuleia Trail makes its way through native mesic forests dominated by olopua trees and palapalai ferns.  The trail gains additional elevation until it reaches a hunter’s shelter where the trail gradual descends as it contours in and out a series of small gullies. 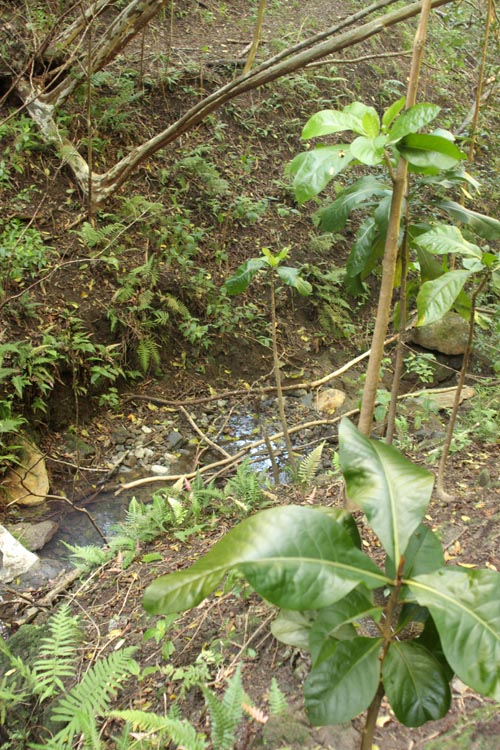 One of the more charming sights along the trail is a small gully carved by a stream with a grove of papala (Pisonia spp.) and oha wai (Cyanea superba) along its banks.  This stream is fed by ground water for most but not all of the year — it is often reduced to barely a trickle during long dry summers.  A fenced exclosure has been constructed next to the stream to protect an outplanting of endangered oha wai shown in the photo below. 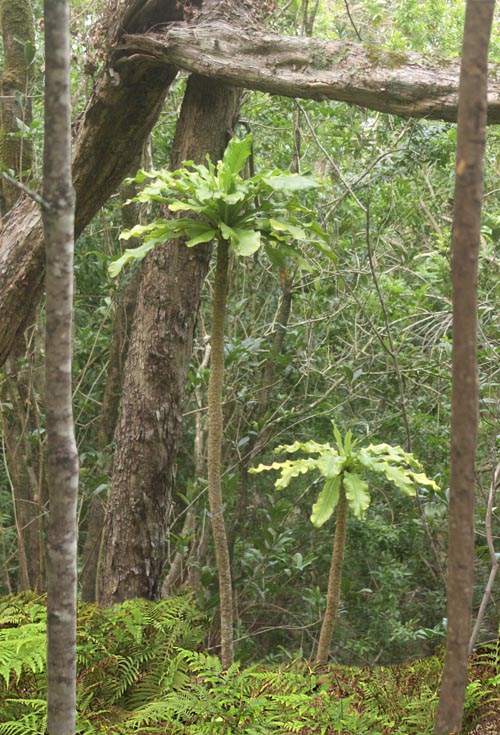 Cyanea superba are extinct in the wild.  Seeds from the last plants were collected, propagated in green houses, and then outplanted in fenced exclosures in a handful of locations in the Waianae Mountains.  Reaching up to 20 feet in height, Cyanea superba are almost palm-like in appearance with a large shock of leaves emanating from the top. 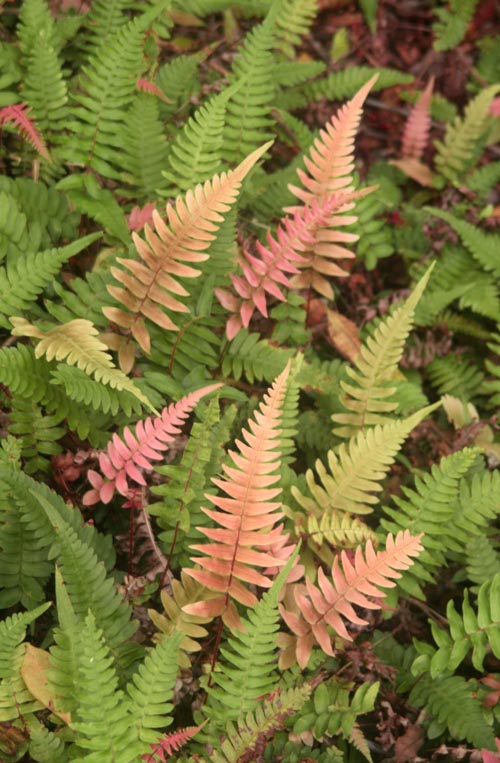 Happy-face spiders can be found along this upper section of the Mokuleia Trail.  Whenever I reach the stream and exclosure, I start looking in earnest on the underside of large broad leaves.   I have been especially lucky to find them on a section of the trail with a thick growth of introduced ferns — Blechnum occidental — whose charming young fronds start off pink in color and then turn green as they mature. 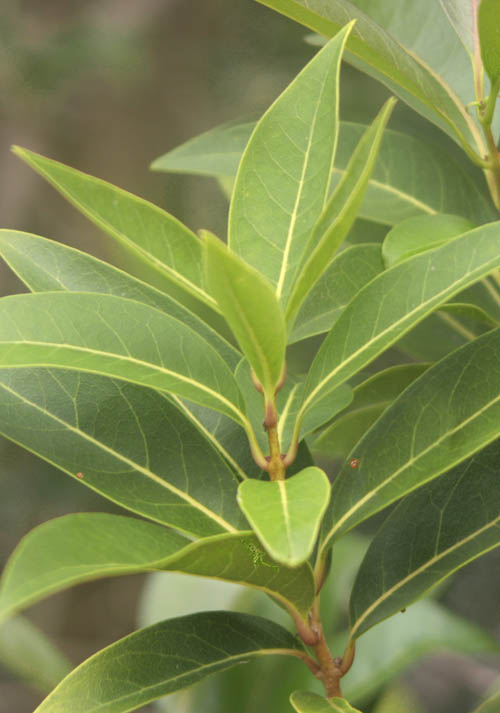 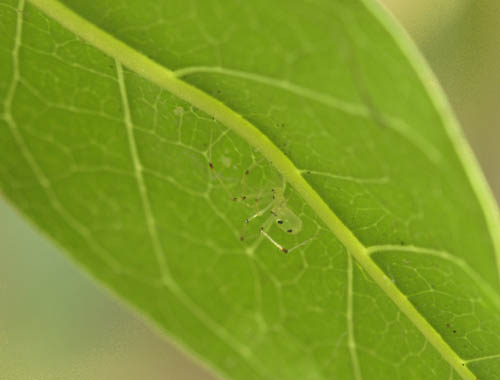 Happy-face spiders, or nananana makaki’i in Hawaiian, are tiny — their bodies are no more than a quarter inch long.  From leg to leg, the spiders are at most an inch long.  The spiders exhibit a wide range of patterns and colors on the back of their abdomen, sometimes resembling a smiling face. 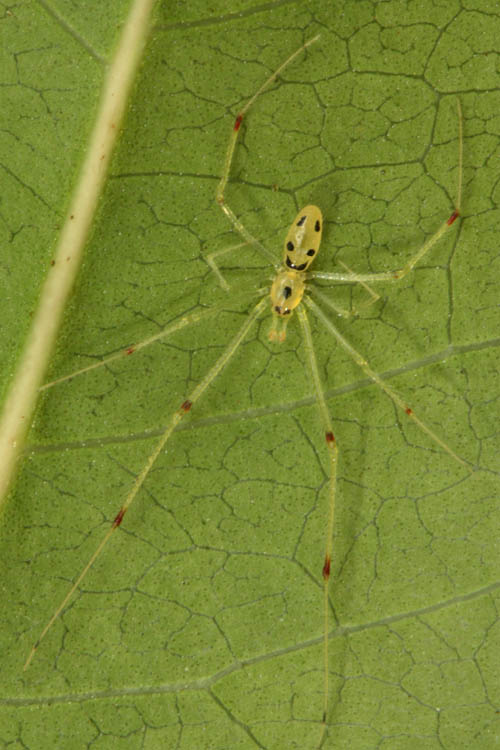 There is considerable variation in the size, shape, and proportion of their heads, abdomens, and the legs. The happy-face spider above has a slender abdomen and long legs with red spots on the joints of its legs.  Happy-face spiders are endemic to the Hawaiian Islands but are only found on four islands: Oahu, Molokai, Maui, and Hawaii. 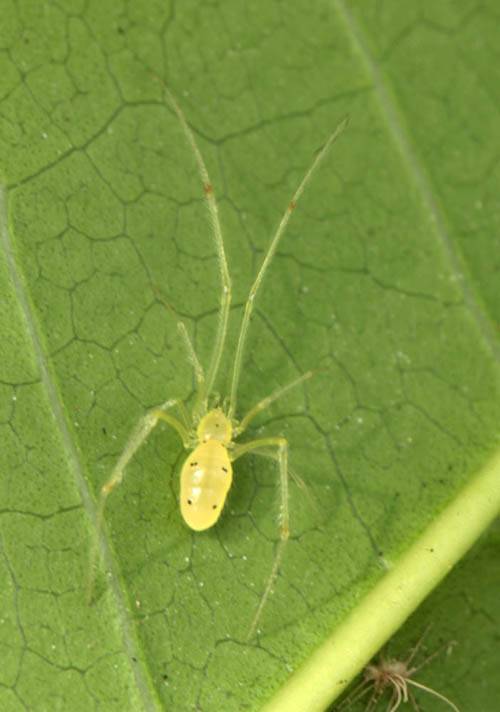 While the spiders are called “happy-face” spiders, many of them do not have a happy-face pattern on their abdomen.  The markings on this spider have been reduced to a set of black dots.  It also has an extremely long set of fore legs that completely dwarfs the others.  These spiders hide on the undersides of leaves where they build minimal webs which they use as climbing ropes to catch prey. 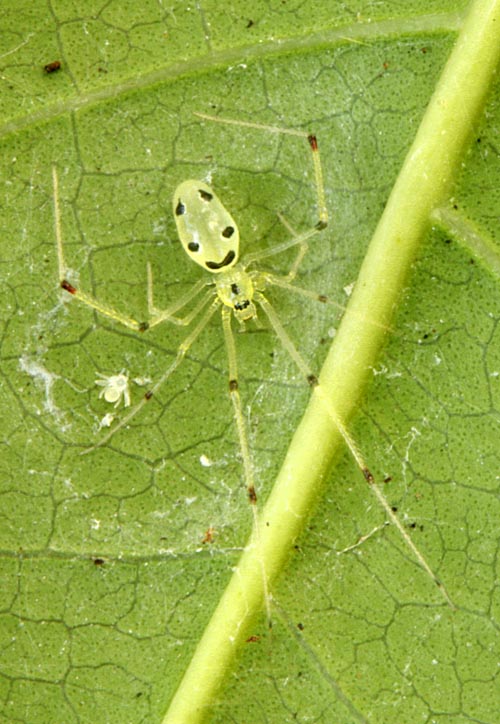 Happy-face spiders are unique in the spider world in that they protect their eggs and catch food for their spiderlings, until their offspring can fend for themselves.  The plump white blob between the legs of he adult is a cute little spiderling.

Happy-face spiders are fascinating little creatures in the native forest.  It never ceases to amaze me to see the wide variation in body proportion, pattern, and color they can take.  If you ever have the time to take a leisurely stroll through the upper sections of the Mokuleia Trail, start turning over the leaves along the trail and look for them.   You will be pleasantly surprised.