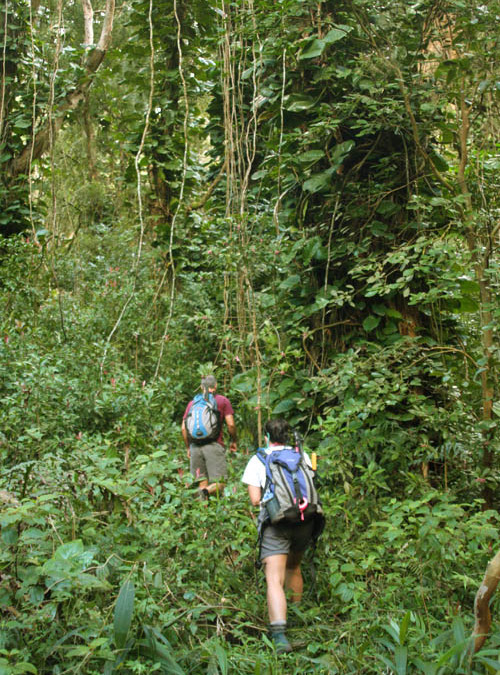 I joined the trail maintenance crew of the Hawaiian Trail and Mountain Club (HTMC) to clear the Bowman Trail that leads to the summit of Kahua’uli — the cloud shrouded peak on the Koolau Mountains just west of the Likelike Tunnel.

Kahuauli is the 2,740 foot peak on the Koolau that straddles the valleys of Kalihi and Moanalua on the leeward side and towers over H-3 as it curves along Hoomaluhia Botanical Garden in Kaneohe on the windward-side. 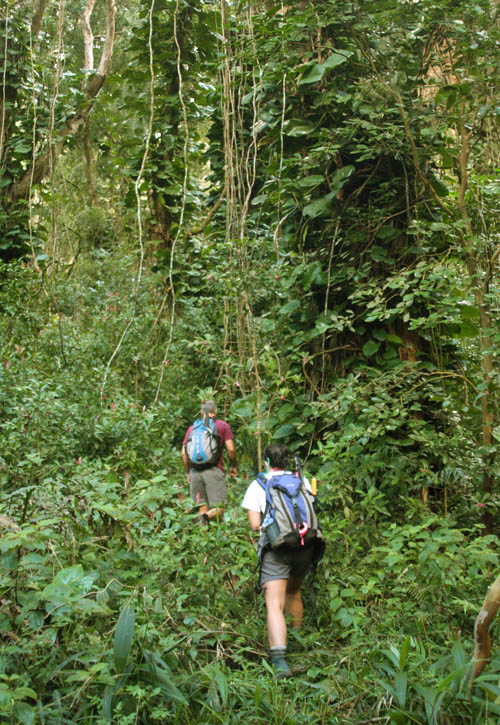 The crew split-up into smaller teams to clear the 6-mile long Bowman Trail which starts in the back of Fort Shafter and leads to the Koolau Summit Ridge.  Our team, whose mission was to clear the top of the trail, was dropped-off along side Likelike Highway near the tunnel.  We made our way through albezia and other introduced trees covered with exotic pathos vines and began to climb up the side of the valley. 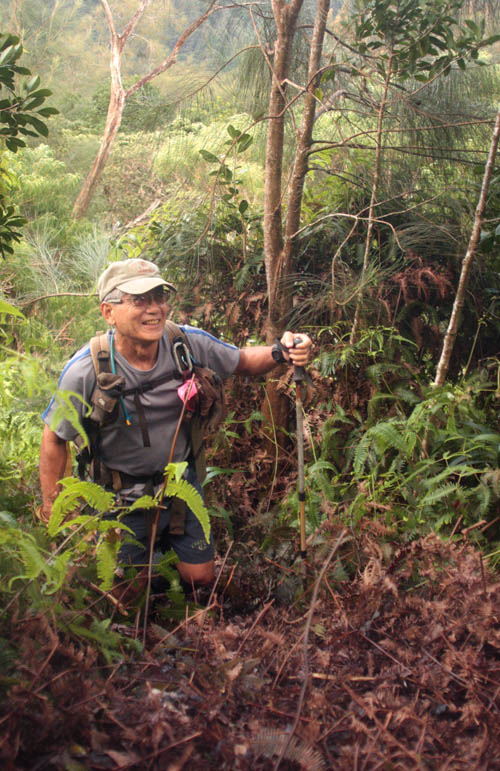 Thomas Yoza lead us up a steep side-ridge that connects with the top of Kahuauli Ridge. As we left the valley floor and climbed up the ridge, the vegetation became increasingly more native the higher we climbed.  We saw a progession of native trees — koa, kopiko, mauwa, manono and ohia — as we plodded up the ridgeline. 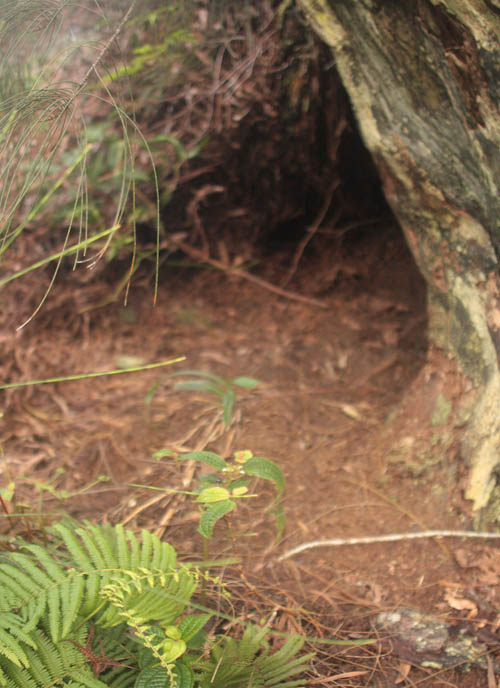 While making our way up the ridge we stumbled upon a pig’s den which had been hollowed-out into the mountain side and was sheltered on one-side by a large ohia tree.  Wild pigs thrive in the upper reaches of Kalihi Valley and we saw much more evidence of their presence as we made our way up the mountain. 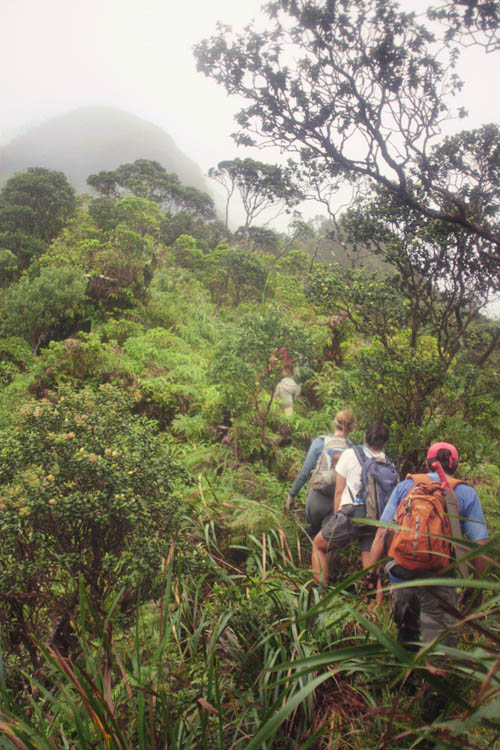 The climb up the side-ridge provided excellent cardiovascular exercise.  As we made our way up the trail through uluhe ferns, ukiuki grass and ohia trees, we could clearly see that the distinctive knob-shaped peak we would have to climb to reach the summit was shrouded in clouds. 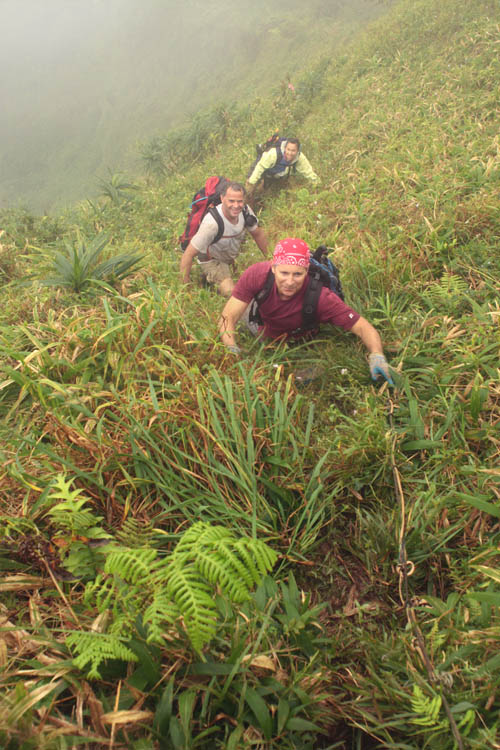 Climbing ever upwards, we pierced through the clouds and entered a kapu (forbidden) zone called “wao akua” by the Hawaiians — the realm of the gods — where the spirits (akua) reside. Wayne, Larry, and Ellyn climb up the knob-shaped peak with the use a cable installed on the steep mountain-side. 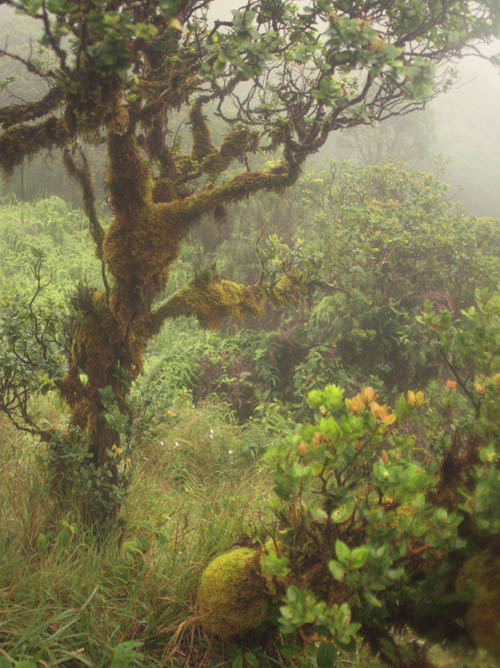 Soon after we climbed up the knob, we encountered a strange landscape shrouded in foggy mist.  The forest was dark, damp, and cold, and the trees were covered with shaggy mosses which gave the forest an otherwordly appearance.  It is little wonder that the Hawaiians considered this to be the realm of the gods.

Cloud forests are found at roughly 2,500 – 4,000 feet elevation on Oahu where clouds cover the mountain-tops for a considerable proportion of the time.  Due to the lack of direct sunlight, the trees in cloud forests are typically shorter and more heavily branched than the same trees at lower elevations. In the photo above Ellyn makes her way through ohia trees covered with a heavy growth of mosses and ferns. 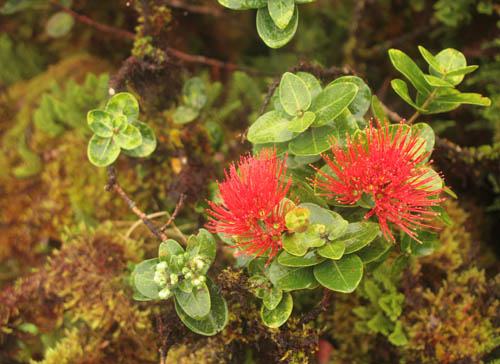 One of the more charming sights we saw in the cloud forest were the vibrant red blossoms of ohia which added much color and texture to the otherwise subdued landscape. 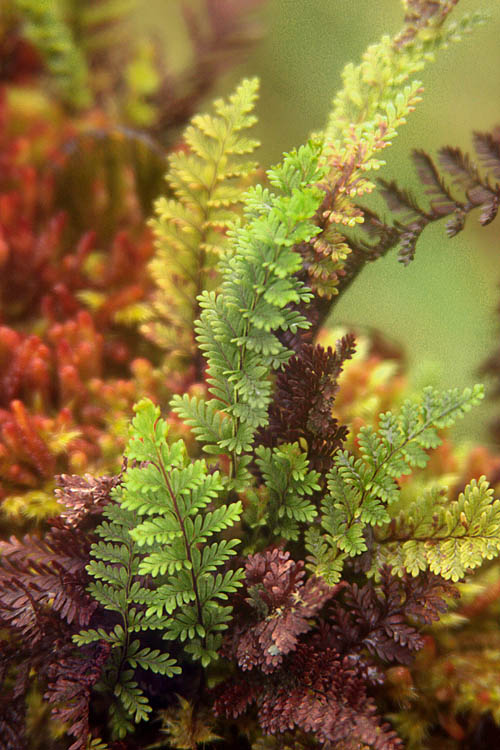 Mosses and ferns grow profusely on cloud forest trees and greatly increase the surface area by which trees interact with passing clouds.  This significantly increases the amount of moisture that is able to condense on trees. 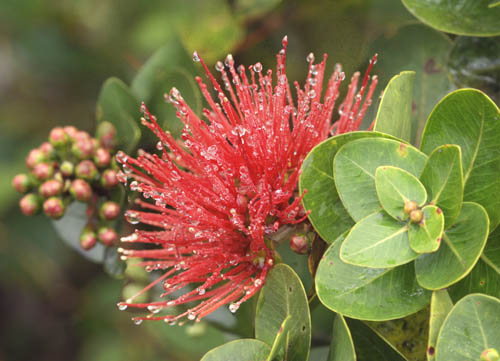 Cloud forests receive a considerable proportion of their moisture — estimated to be between 30% to 40% — from passing clouds.  Moisture from clouds condense on the vegetation, drip down branches, and soak into the earth where they percolate slowly into the aquifer and join the ground water. 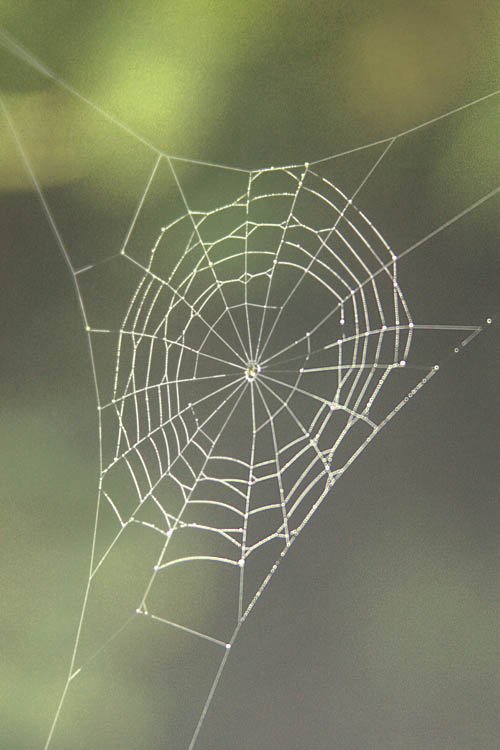 Water droplets also condense on spider webs near the summit of Kahuauli.  I made serveral attempts to photograph the spider that spins these webs but no matter how steathily I approached, the spiders would always jump off.  As a result, it is still a mystery to me what kind of spider makes these webs. 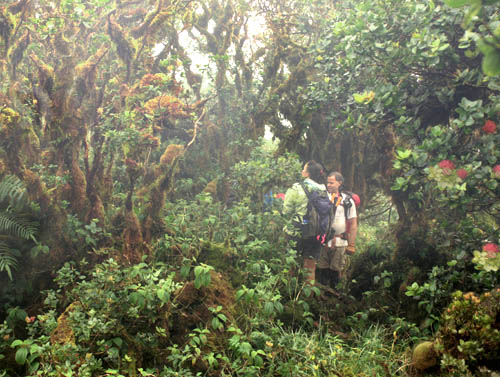 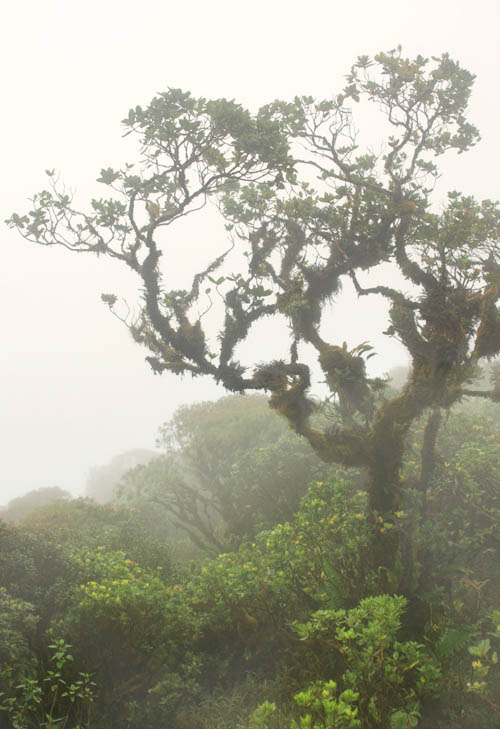 When we reached the summit of Kahuauli, clouds completely blocked the panoramic view of Kaneohe Bay and the windward coast of Oahu.  After eating our lunches we turned around and made our way back down from the summit. 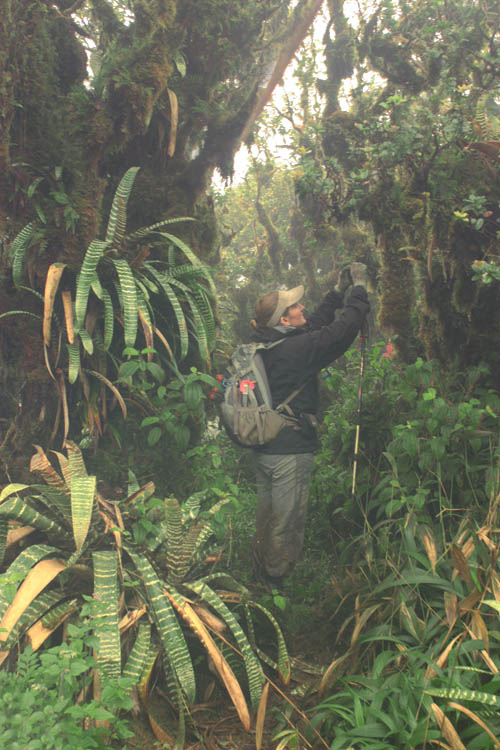 Invasive bromeliads thrive in the cloud forest at Kahuauli.  While they are beautiful, these bromeliads will take over the forest is they are not removed.  In the photo above, Karen Liliker does her part to preseve the native cloud forest by removing bromeliads from moss covered trees. 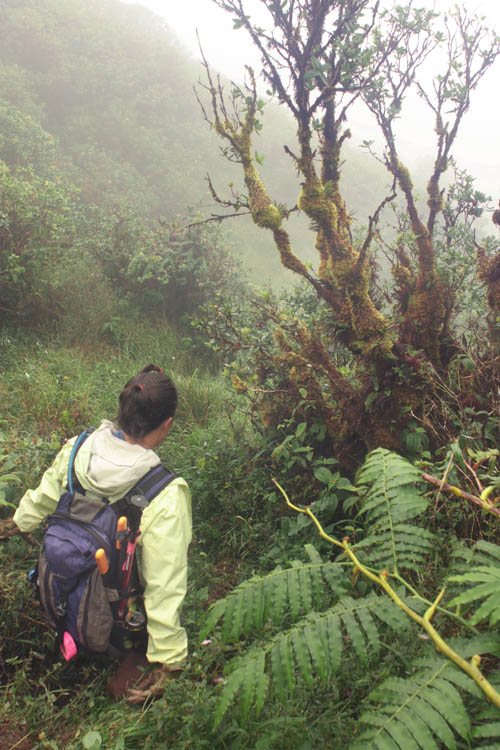 While making our way back down we saw many mule’s foot ferns which are also an invasive species.  These ferns reproduce prolifically, produce large fronds 12 feet long, and take over large portions of the landscape. 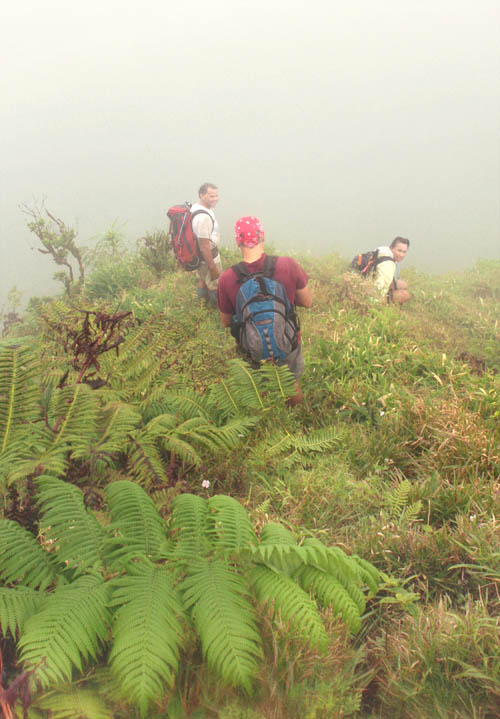 Leaving the native ohia forest behind, we began to descend the knob-shaped peak.  I was pleased to see a patch of lovely hapu’u ferns as we climbed back down the steep cloud shrouded mountain-side. 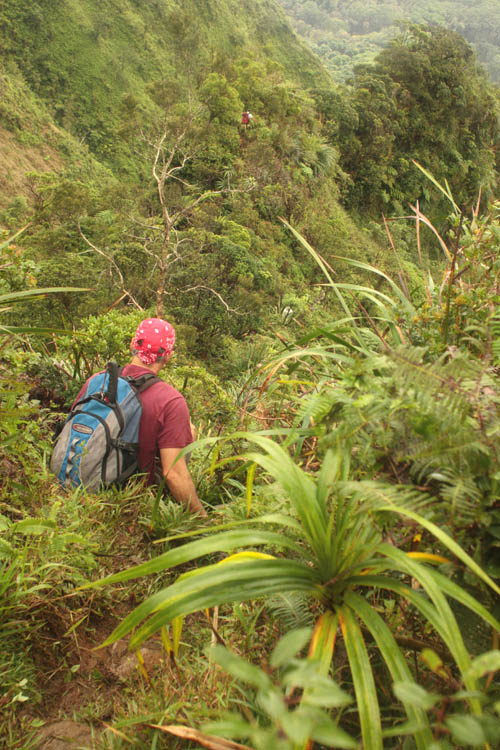 Making our way back down under the clouds, we re-enterred “wao kanaka” — the realm of humans — where people reside.  As I continued downwards I reflected on my great fortune at experiencing the native cloud forest at Kahuauli.  It is truly an amazing and otherworldly place to visit.

Wao Akua and the Rain Forest, Hawaii Ecosystems at Risk

Mauka, State of Hawaii, Department of Land and Natural Resources

The Hawaiian Ahupua‘a Land Use System: Its Biological Resource Zones and the Challenge for Silvicultural Restoration, by Dieter Mueler-Dombois, University of Hawaii at Manoa