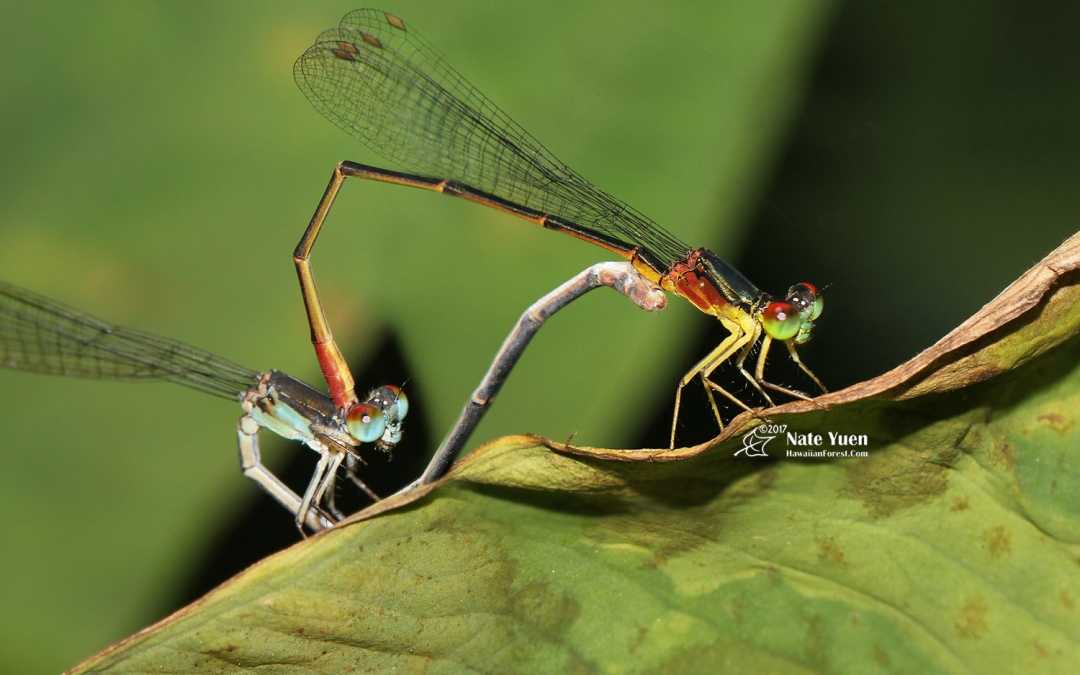 I was thrilled to see Blackline Hawaiian Damselflies — Megalagrion nigrohamatum nigrolineatum — high in the northern Koʻolau Mountains at about 2,000 feet elevation. 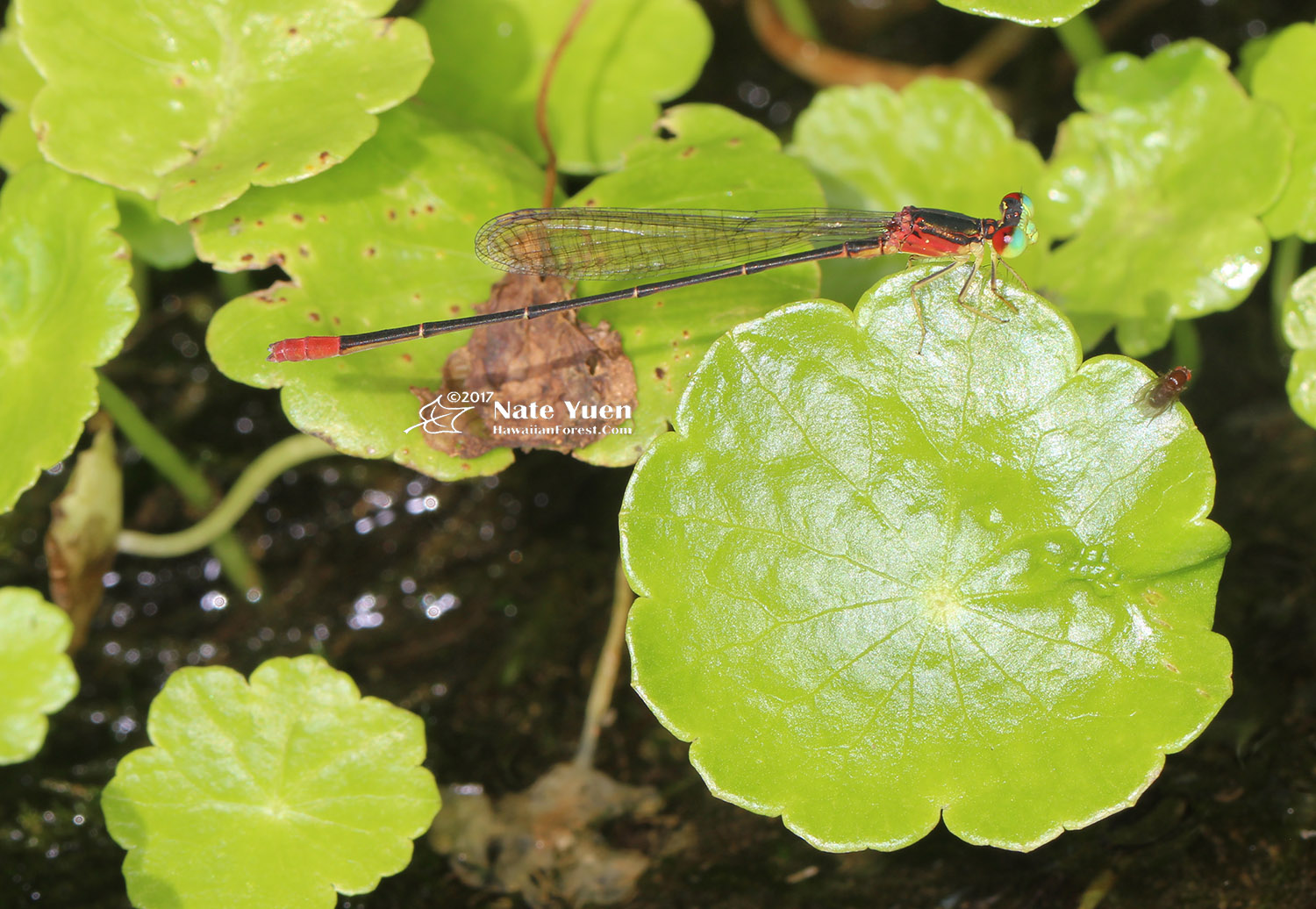 Some of the male Blackline Hawaiian Damselflies have rainbow colored eyes with 3 colors: red, cyan, and yellow.

With the recent discovery of a previously unknown remnant population of Blackline Hawaiian Damselflies at low elevation in Kāneʻohe, I needed more photos of them at high elevation.  So I hiked high into the northern Koʻolau Mountains to look for and photograph them.  Blackline Hawaiian Damselflies are endemic only to O’ahu.  They were once widespread at all elevations but since the 1970’s their numbers have crashed due to habitat loss and predation/competition from introduced species. 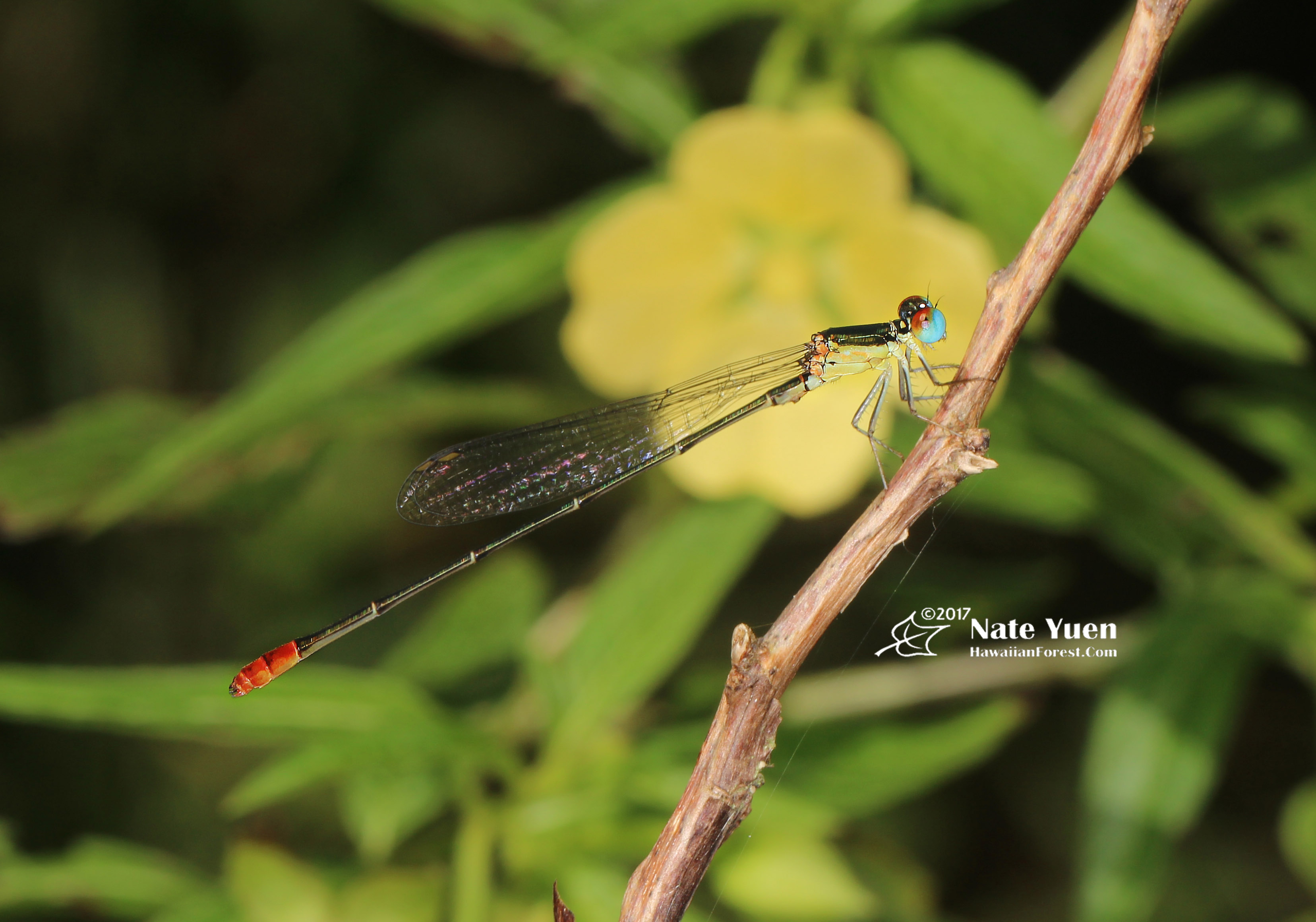 The damselfies come in an array of colors. This damselfly is a female — there is no grabber at the red tip of its long segmented abdomen which males have.

In 2012 Blackline Hawaiian Damselflies were put on the federal list of endangered species. Only an estimated 1,000 of these damselflies remain in 16 known populations.  With the exception of the recently discovered population in Kāneʻohe that somehow found a way to survive at low elevation, the only damselflies left are high in the Ko’olau Mountains. 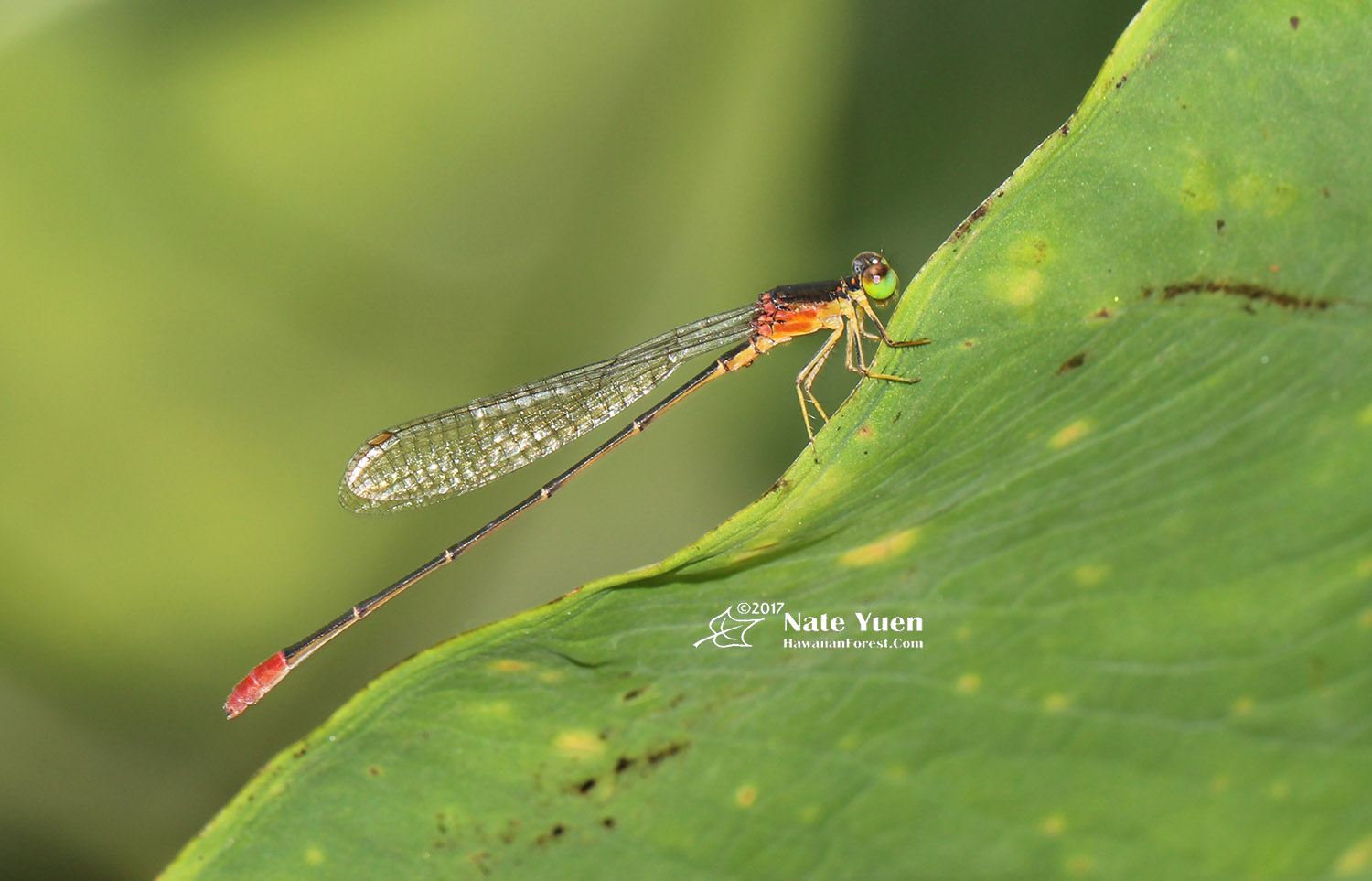 The topside of the damselfly’s thorax is black and is colorful on the sides.  Most have colorful bi-colored eyes but some are tri-colored.  This male has an unusual black and green eye.

I was captivated to see how the high elevation damselflies came in an array of different colors. There is lots of variation in the color of their thoraxes and eyes.  The Hawaiian name is pinapinao ānuenue — rainbow eye damselfly — an appropriate name for such a colorful insect. 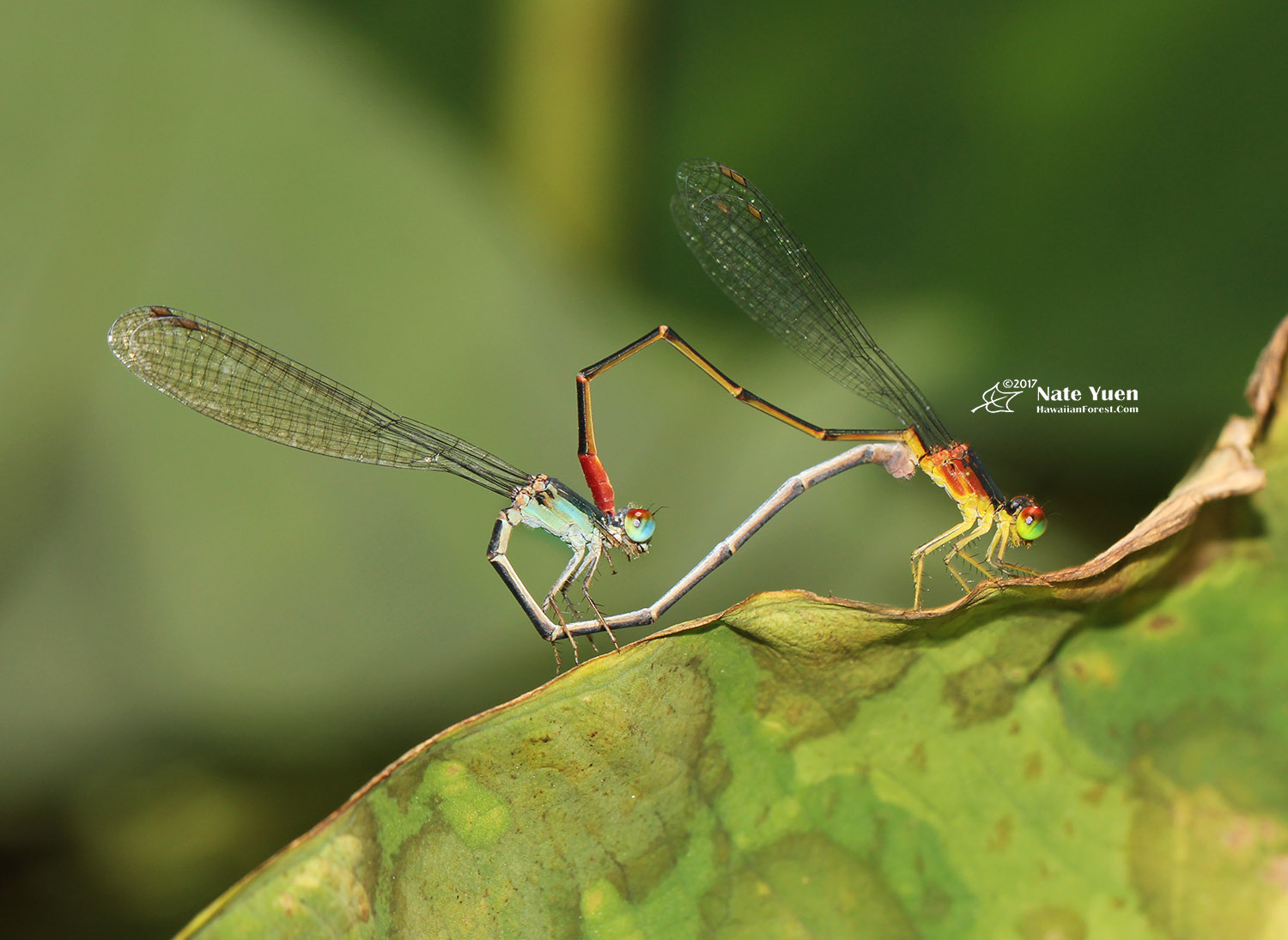 By watching them mate and lay eggs I observed multiple color morphs. Males take the front position and grasp the female with a grabber at the end of his abdomen just behind the female’s head.  Females curl their abdomen forward to a spot under the males thorax where she fertilize her eggs with his sperm. 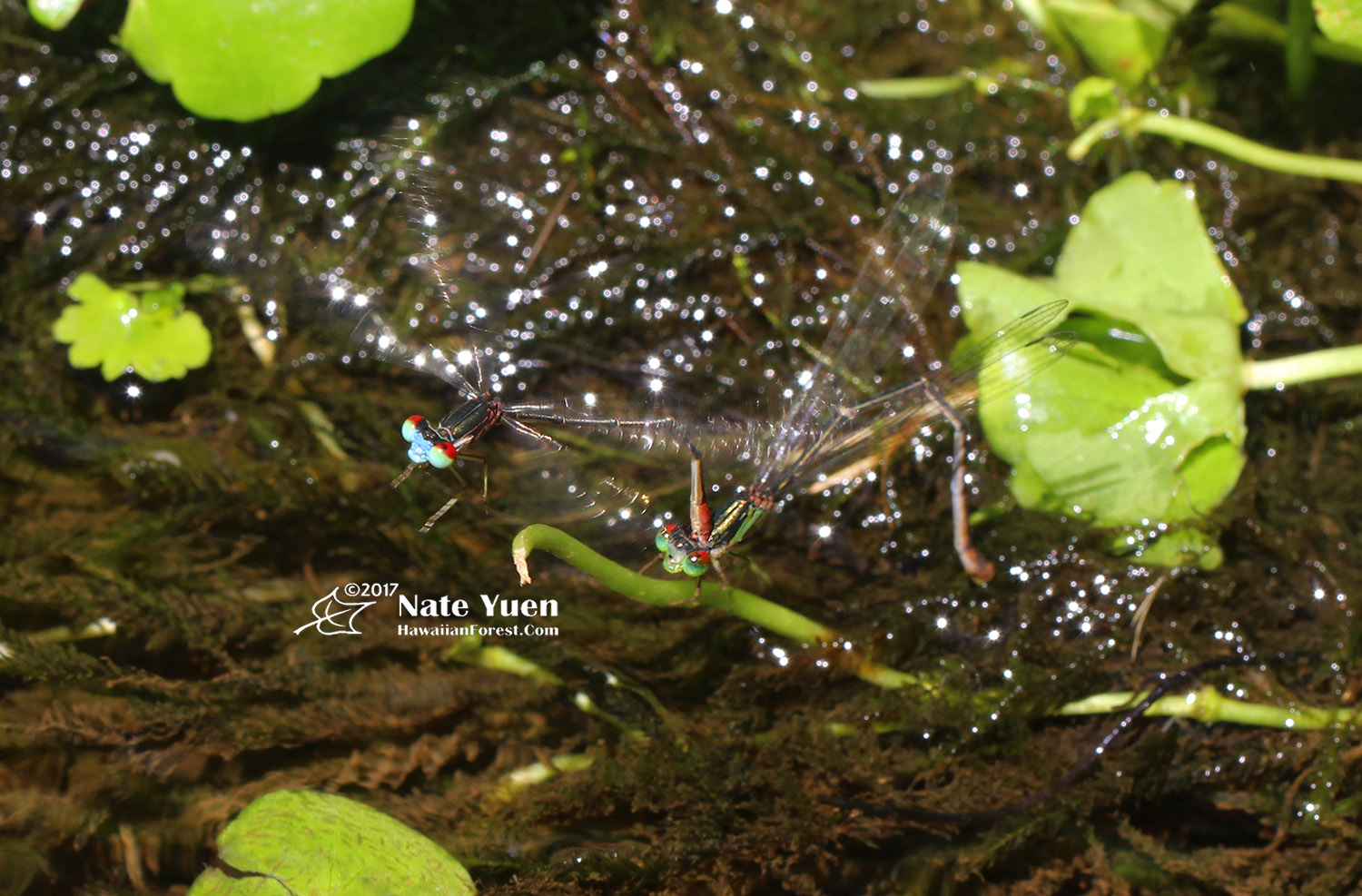 While still grasping the female with his grabber, the male beats his wings rapidly until they land on a suitable location to lay eggs. The female has red and green eyes while male has red and blue eyes.

They then fly to freshwater where the female inserts her ovipositor into the water so she can lay her eggs on the vegetation underwater. 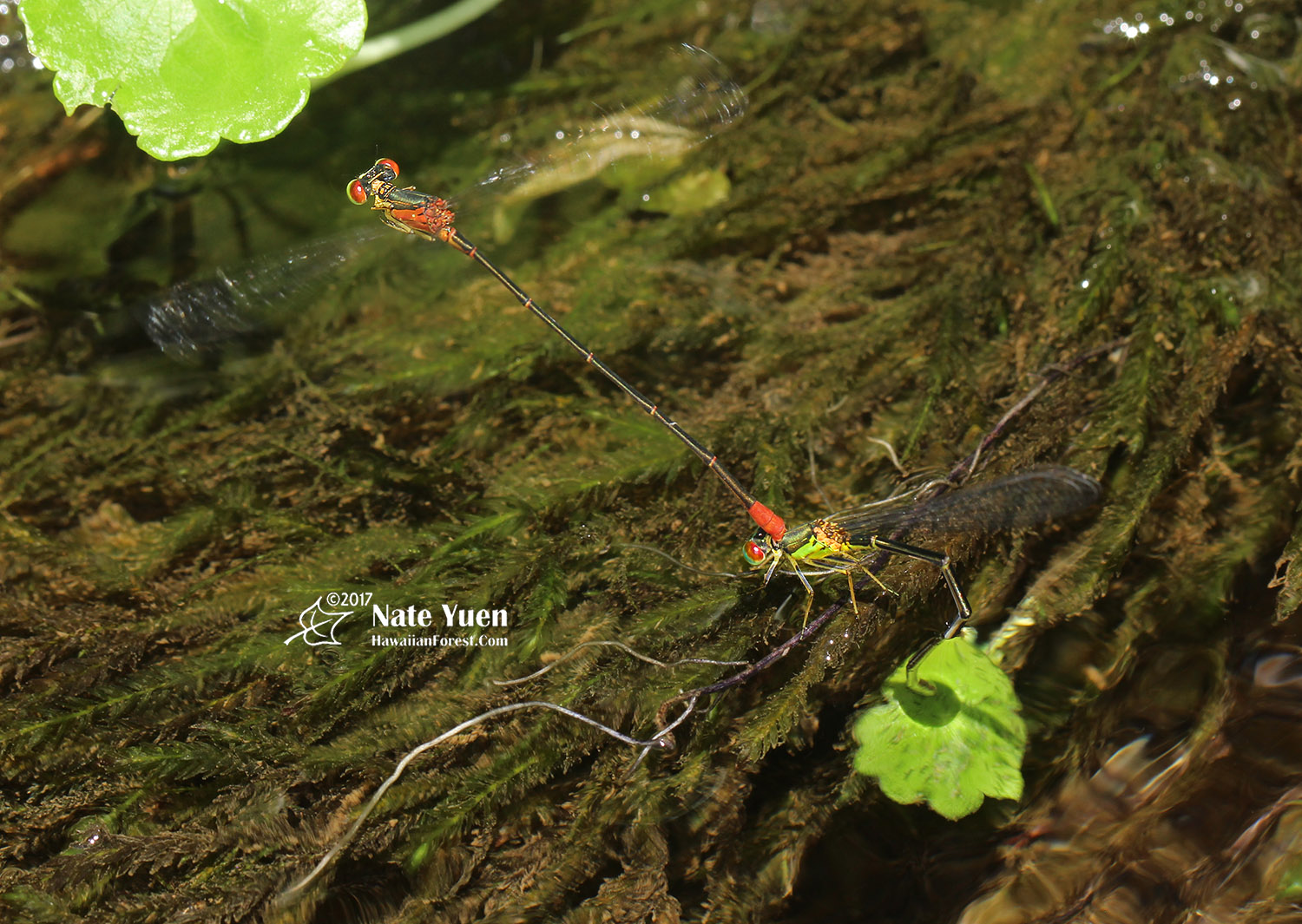 The female laying eggs underwater has a yellow thorax and tri-colored eyes while the male overs over her still connected.

The eggs hatch into nymphs where they live underwater.  After several molts the aquatic nymphs move on to the next stage in their life cycle and transform into flying adults. 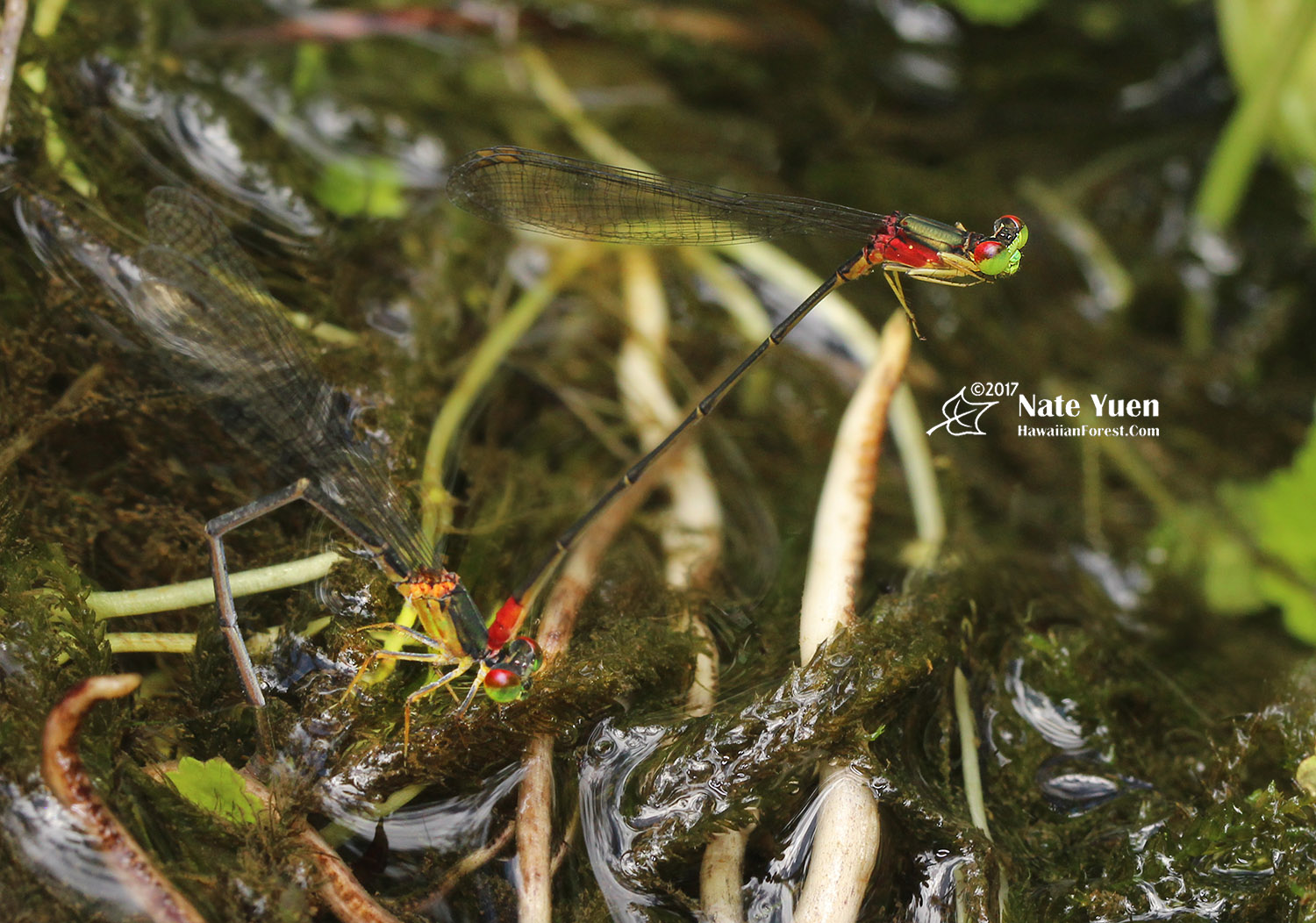 This male has a crimson colored thorax while the female has a yellow thorax. Both have red and green eyes.

The male is able to stand erect without beating its wings held in place by the grabber at the red tip of his abdomen. 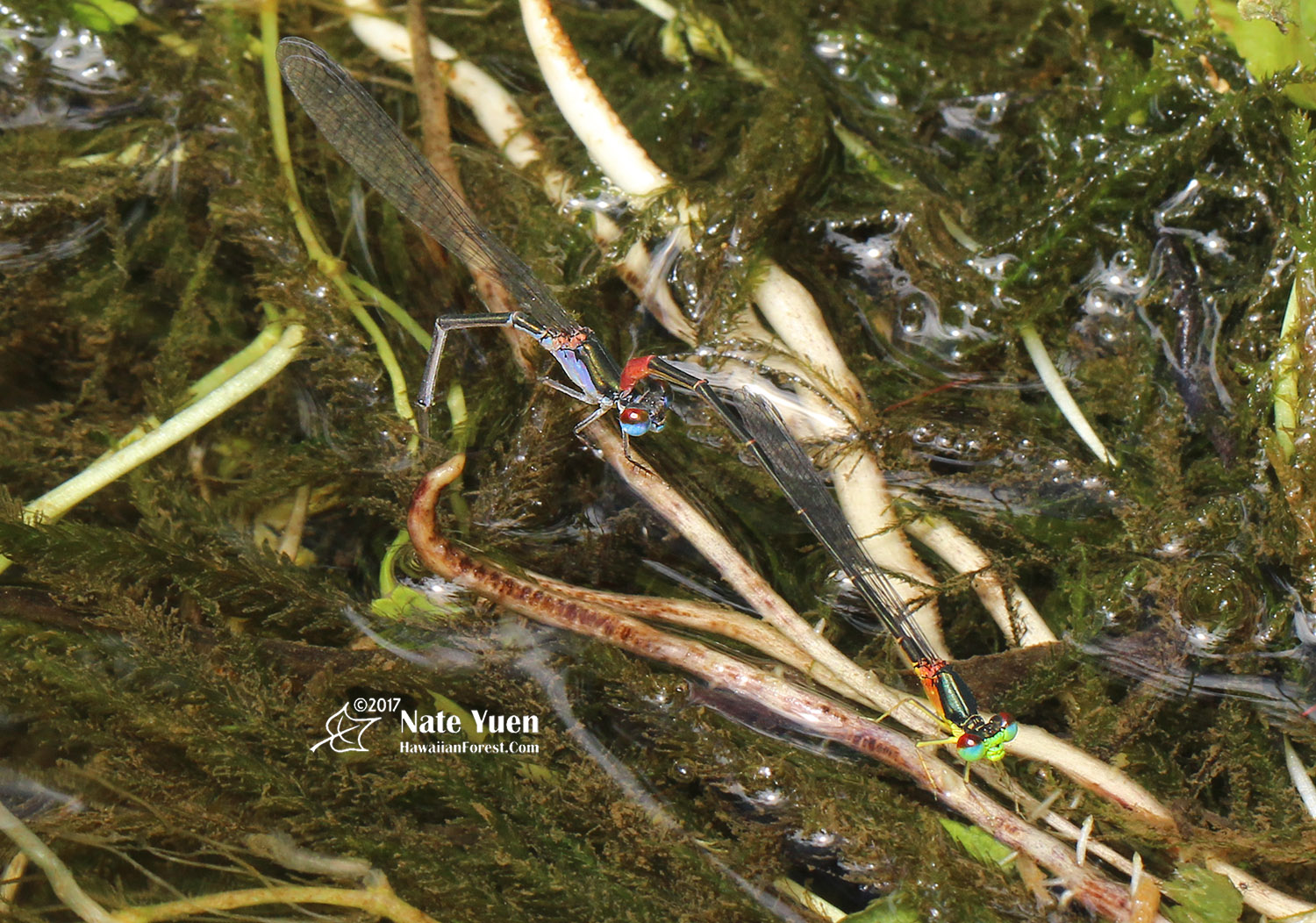 The eyes of this male are red, cyan, and green while the female has red and blue eyes.

This purple colored damselfly is the rarest color morph I observed. I have only seen this one individual. Pinapinao ānuenue – literally “rainbow damselfly” – is a fitting description for a creature that comes in multiple hues. 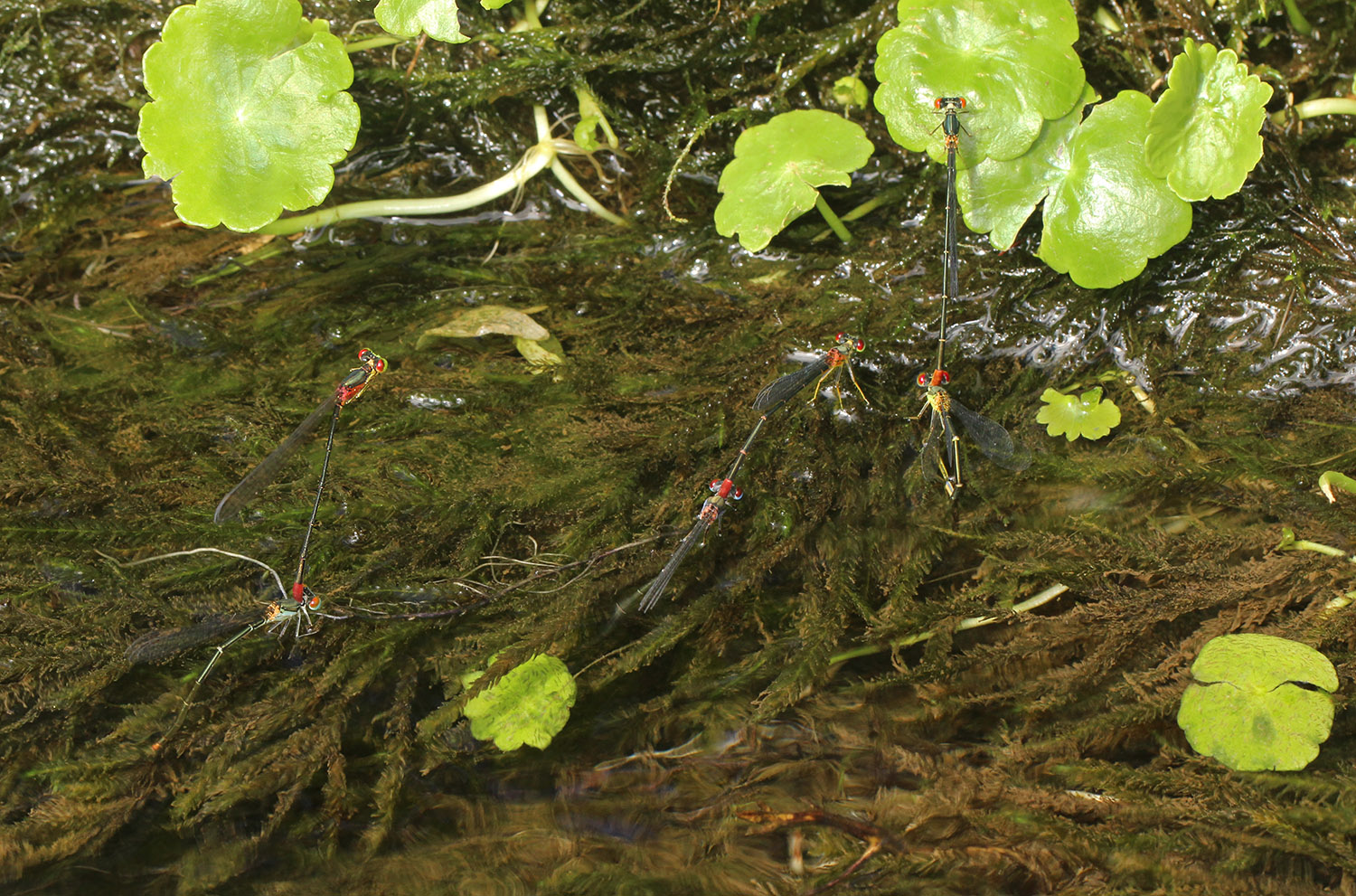 It was great to see so many pairs mating and laying eggs. Here’s hoping their numbers rebound and repopulate our island.

The discovery of a previously unknown population of low elevation Blackline Hawaiian Damselflies in Kāneʻohe is a remarkable and significant find.  Rainbow damselflies are unique to the natural history and heritage of O’ahu and need to be protected.