White-tailed Tropicbirds in the Kaʻu Desert 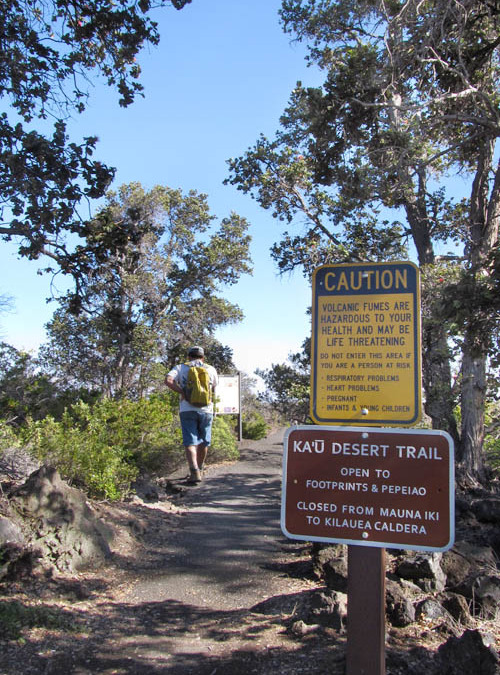 I hiked to a pair of pit craters in the Kaʻu Desert to look for Koaʻe kea or White-tailed Tropicbirds in Hawaiʻi Volcanoes National Park.

When I told my hiking buddy — Pete Morton — about the red-tailed tropicbirds I saw nesting on Oʻahu, he said he knew where white-tailed tropicbirds nested on the Big Island!  So we wasted little time and drove to the Kaʻu Desert Trail located halfway between mile markers 40 and 41 on Highway 11 to look for the birds. 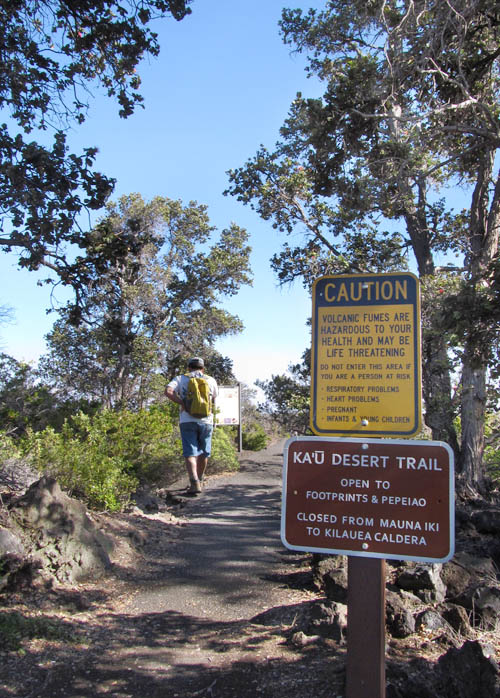 The Kaʻu Desert lies in the rain shadow of Kīlauʻea and receives about 40 inches of rain per year — which is dry — but not arid enough to be a true desert which gets under 10 inches per year.  But the volcanic gases from Halemaʻumaʻu creates acid rain, weathers the lava rock into sand, and makes the land resemble a desert. Because the noxious fumes can be life threatening, those who are at high risk — pregnant women, infants, young children, and anyone susceptible to respiratory or cardiac distress — are advised not to enter this area. 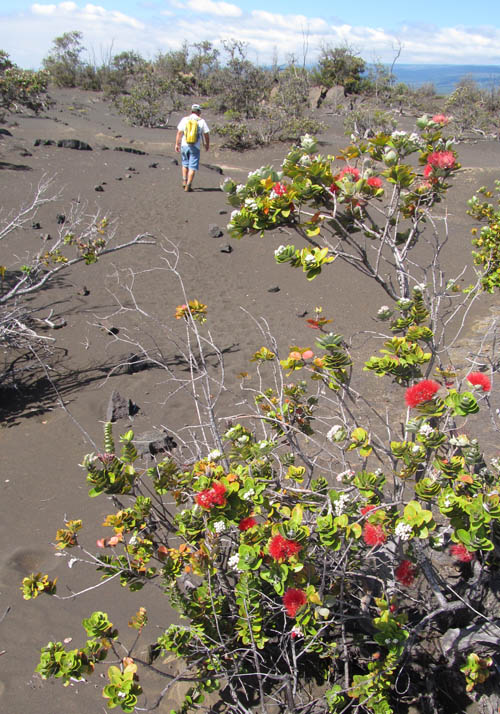 There was lots of volcanic sand on the first leg of our trek.  The 5.5 mile route to the Pit Craters — which makes for an 11 mile round trip — is marked by ahu or cairns (piles of stones) and by small rocks that line either side of the path. 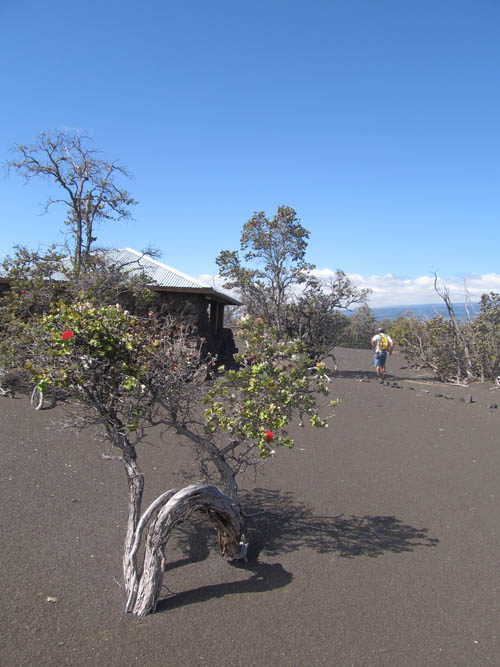 When we reached the footprints pavilion we saw some incredibly twisted ʻōhiʻa trees.  ʻŌhiʻa are slow growing trees under the best of conditions let alone in dry, acidic, inhospitable landscapes which stunts their growth. 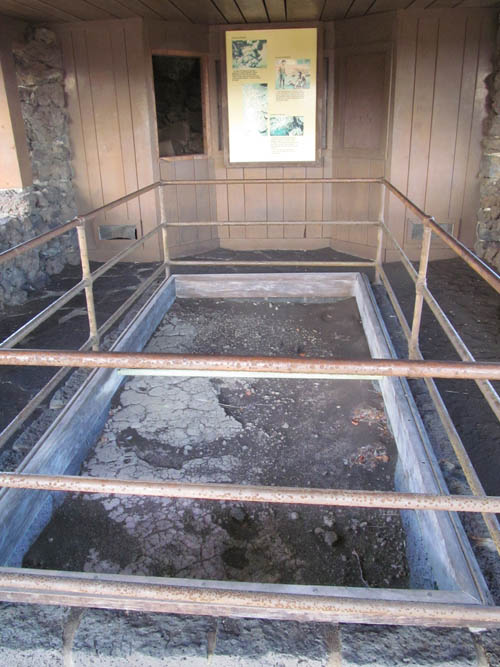 The pavilion shelters the imprints of human feet said to belong to the troops of Keoua — rival of Kamehemeha. Following a battle between Kamehameha and Keoua in Hilo in 1790, Keoua retreated to his home in Kaʻu by way of Kīlauʻea.  While passing Halemaʻumaʻu Crater, the volcano erupted with a huge, dense cloud of ash, rocks, sand and gases that rained down for miles around.  About 80 of Keoua’s troops died from the toxic gases.  The footprints are said to be those of Keoua’s fallen warriors. 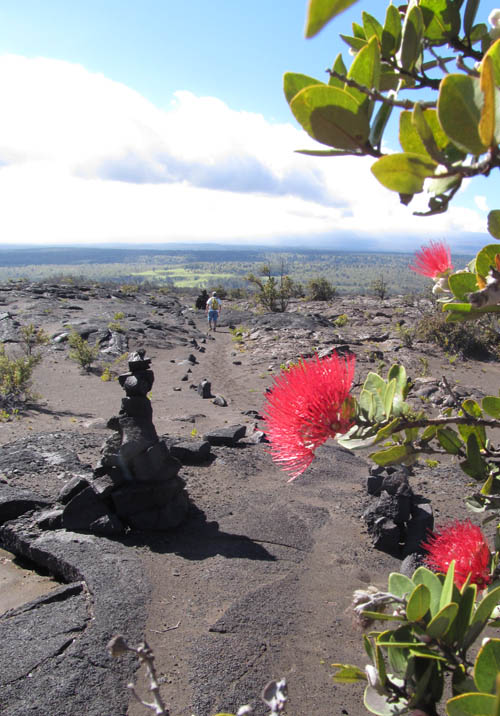 After learning the fascinating story of the footprints, we pushed-off from in the pavilion and made our way further into the Kau Desert. 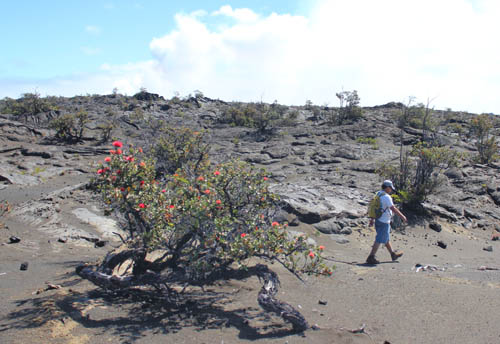 One of the ʻōhiʻa trees with the thickest trunks — possibly centuries old — was sprawled prostrate over the ground in bloom with bright red lehua flowers. 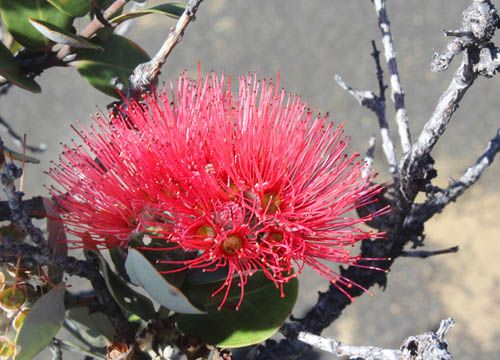 ʻŌhiʻa lehua trees produce clusters of red flowers with tiny petals and elongated pistils and stamens which make the flowers look like pompoms. 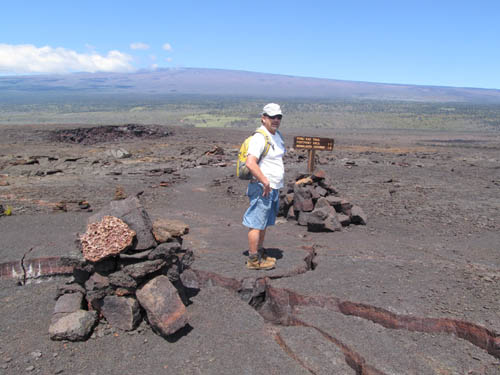 The summit of Mauna Loa loomed way off in the distance as we proceeded to Mauna Iki.  The landscape got more rocky the further into the desert we got. 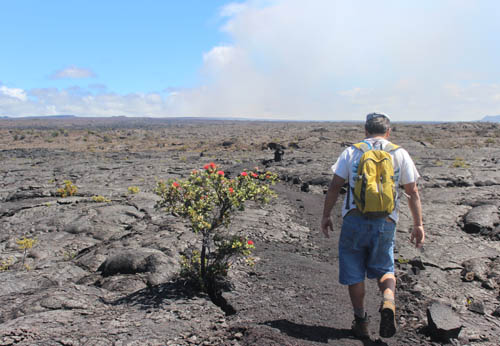 The plume of volcanic gases from Halemaʻumaʻu blew our way briefly but fortunately did not last for long.

The rocks were amazing to see — the lava solidified while oozing over the landscape. 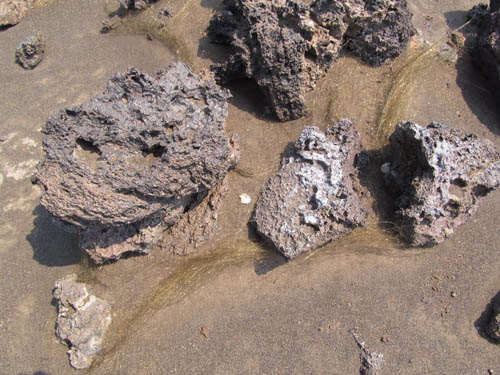 Strands of Pele’s hair collected in the rocks blown by the wind.  The “hair” is molten volcanic glass that was pulled and cooled by the wind into really thin strands. 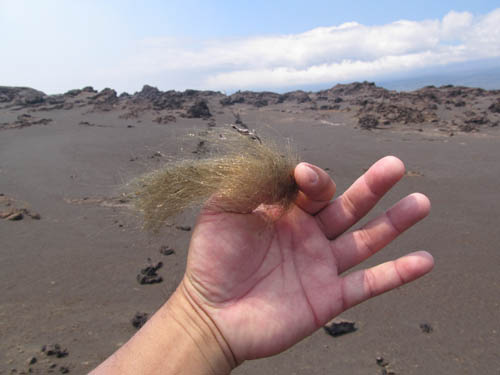 When I picked up Pele’s hair from the ground they had the look and feel of human hair.

When we got to Mauna Iki, white-tailed tropicbirds flew in and circled overhead to check us out!  Koa‘e kea are pelagic seabirds indigenous to Hawaii and the Pacific and Indian Oceans. 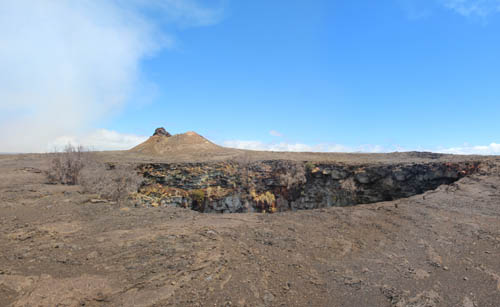 When we got to the pair of pit craters I was surprised to see just how abruptly the edge drops-off.  I watched the volcanic plume of Halemaʻumaʻu blow in the background as I walked along the edge of the 150 foot diameter giant hole and peered into the 100 foot deep pit.

Pit craters are formed when underground caverns of molten magma evacuate and the ground above the chamber collapses into the hole left behind.  When I looked into the hole I could see large lava tubes heading towards Mauna Iki which probably supplied the cone with molten magma from deep below. 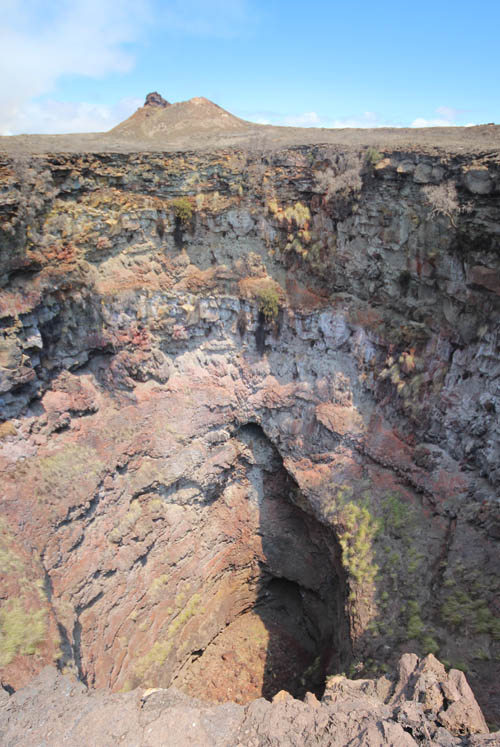 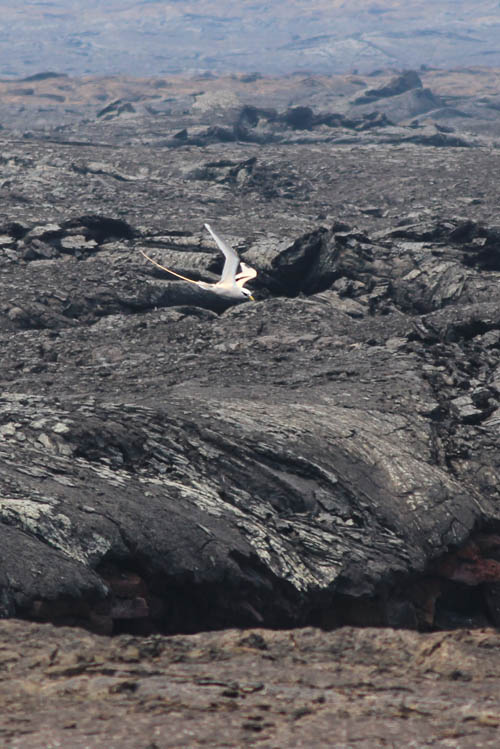 We could see Koa‘e kea, some of them with yellow beaks and tail feathers fly in and out of the giant hole in the ground.  Koa‘e kea are about 36 inches long (including the tail) and have wingspans up to 40 inches wide — slightly smaller than red-tailed tropicbirds.

White-tailed tropicbirds are mostly white but have black streaks on their wings and by their eyes.  Their most distinctive feature is their long tail feathers that stream behind when they fly. 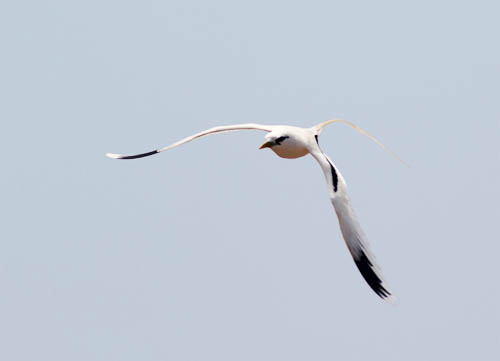 Koa‘e kea nest in the cliffs of Kilauea Caldera and in the craters along the Chain of Crater Road and throughout the national park.  These cliffs are inaccessible to land-based predators and are perfect for cliff-dwelling birds to nest. 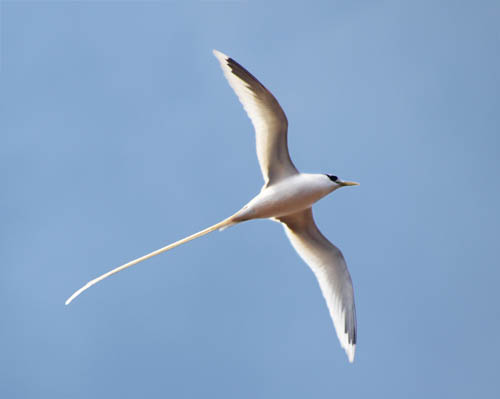 Koa‘e kea are strong agile flyers and can fly high in the sky for great distances.  The fly for miles out to sea and hunt fast swimming fishes and squid by diving 10 feet under water to catch their prey. 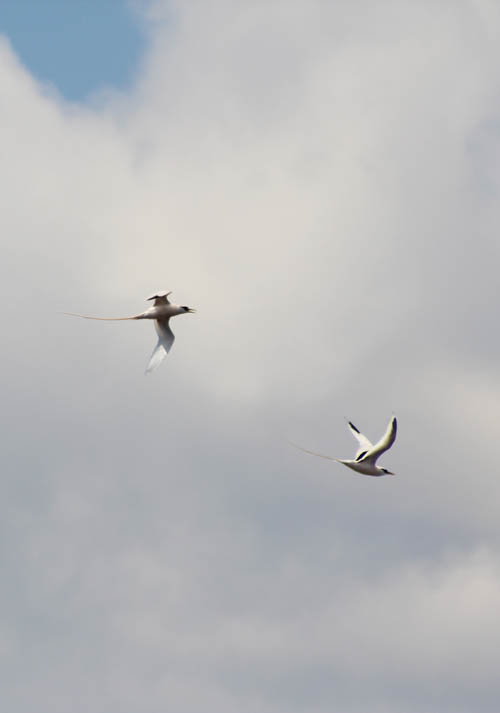 During breeding season — March – June — aerial acrobatics are part of the courtship rituals. 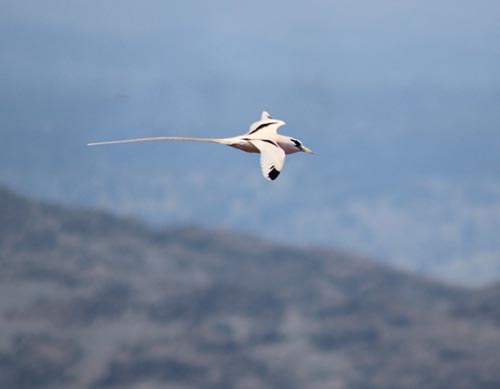 Although I wanted to get a close-up look of them on the cliffs of the pit crater, the crater wall was too steep for me to descend and I never got to see any of them nesting.  The only ones I saw were flying in the air. 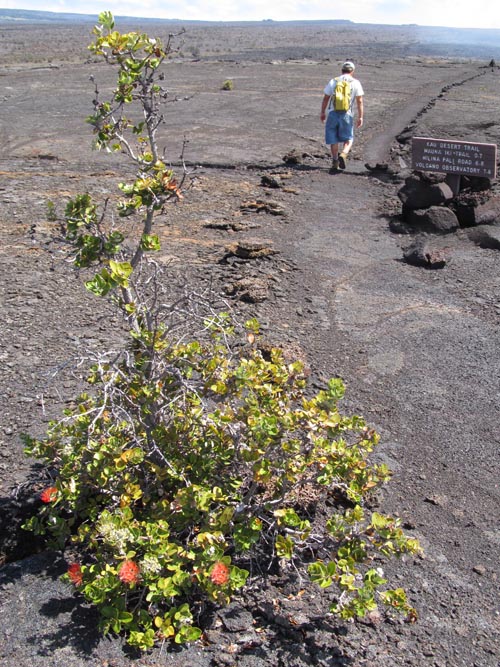 Since we still had the return leg of our hike, we could not remain at the pit craters for long.  After spending a half-an-hour so or we turned around to hike out the way we had come.

While returning to the trail head where we started, I reflected on the great time we had seeing age-old ohia trees crawling over the ground, cones and craters dotting the landscape, and the tropicbirds that nest in them!  What an awesome place to visit!

Koa‘e kea or White-tailed Tropicbird, Division of Forestry and Wildlife, Department of Land and Natural Resources, State of Hawaii