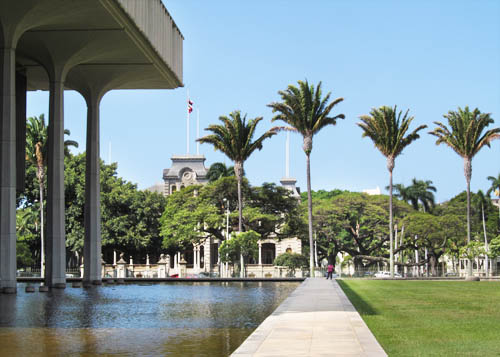 I have been looking for White Fairy Terns or Manu-o-Kū in the parks and trees of Downtown Honolulu.

From January to July, the trees on the grounds of civic buildings, parks, and courtyards in Honolulu become nesting sites for manu-o-Kū, literally the bird of Kū. Kū is one of the four major gods in ancient Hawaiʻi and is god of war, governance, and leadership.

The easiest place to see White Fairy Terns (Gygis alba) during nesting season is on the grounds of ʻIolani Palace, the Hawaiʻi State Capitol, Hawaiʻi State Library, Honolulu Hale, Kawaiahao Church and the other civic buildings, churches, and parks in the heart of historic Honolulu. But they also are known to breed in Kapiolani Park, Waikīkī, the University of Hawaiʻi, Mānoa, Nuʻuanu, and elsewhere on the south side of Oʻahu. 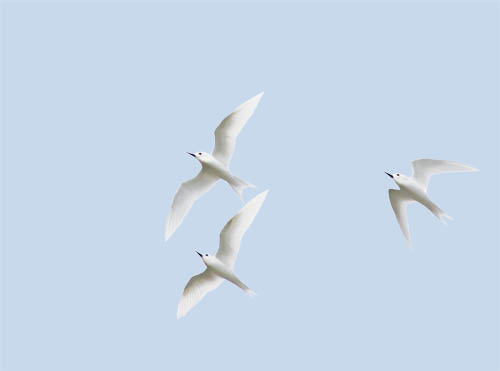 The terns are pelagic seabirds who fly far out over the ocean often for days at a time. 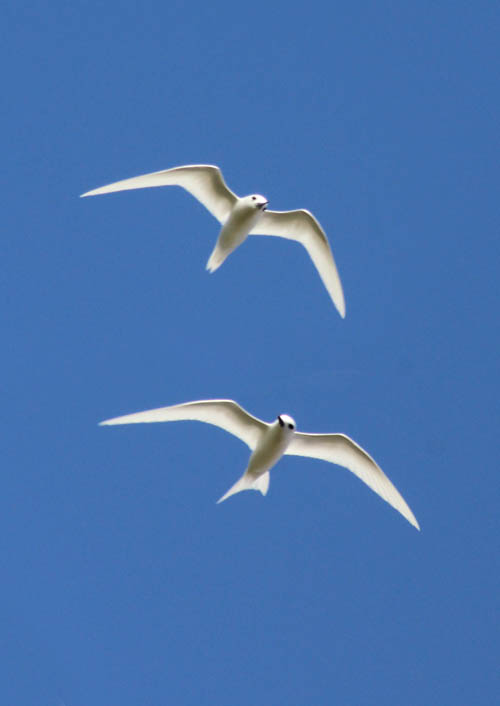 During the breeding season, pairs can often be seen flying in tandem circling Honolulu and venturing up the valleys. 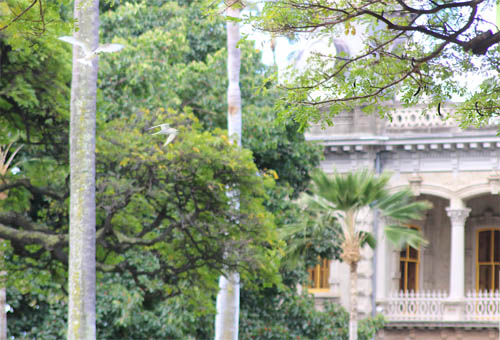 Manu-o-Kū can be seen on the grounds of adjacent historic buildings in the civic center of Honolulu that are landscaped with large trees. 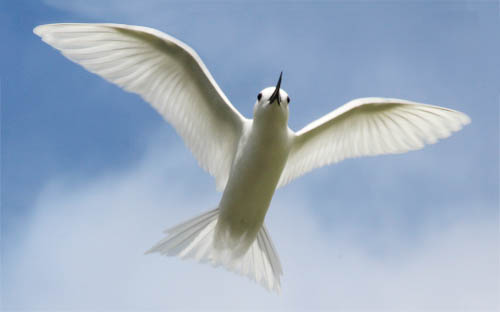 White Fairy Terns (Gygis alba) are indigenous to Hawaiʻi and the islands of the Pacific and Indian Oceans. In Hawaiʻi, the vast majority of the birds live in the Northwest Hawaiian Islands. They were first noticed on Oʻahu in 1924 and their numbers and range have expanded ever since. 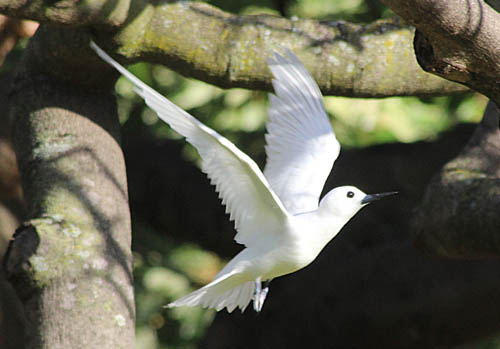 Remarkably, the only place the terns breed in the main Hawaiian Islands is on Oʻahu — and not in the remote parts of the island but in urban center of Honolulu! Because of the birds’ affinity to the city, Honolulu has adopted manu-o-Kū as its official bird. 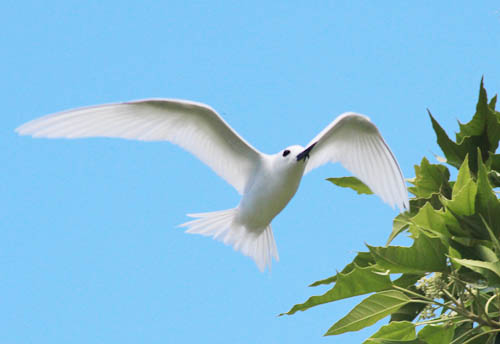 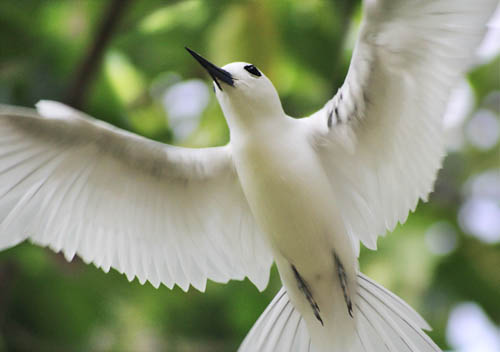 The birds are named “white fairy terns” for their graceful appearance and flying ability. The birds don’t seem to mind urban activity and thrive in human modified environments. 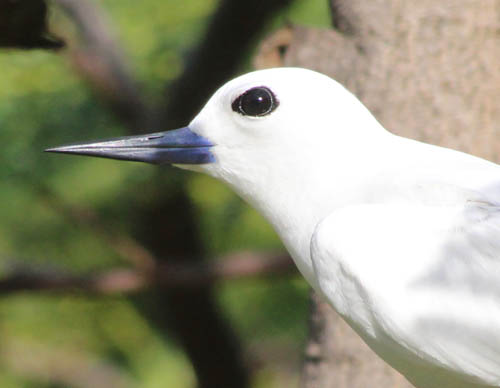 Manu-o-Kū have a black ring of feathers around their bulging eyes which makes their already huge eyes look ginormous. They also have a really sharp black beak that turns blue at the base. 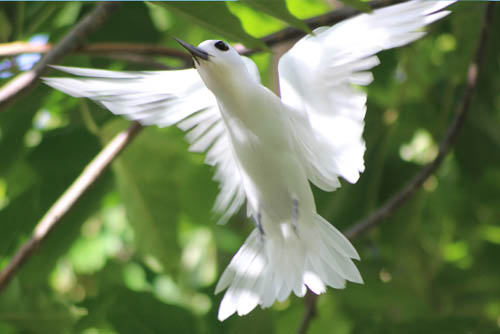 The birds are amazing to watch hovering in mid-air high in the tree tops. 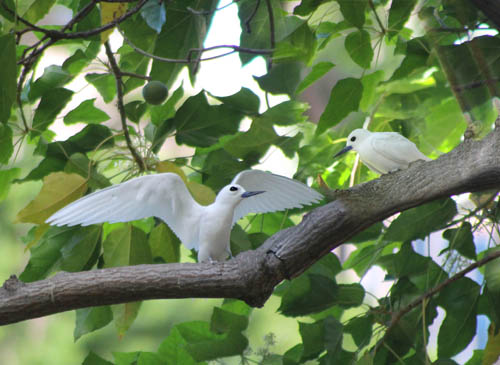 The terns have a life span of 16-18 years and begin looking for a mate after the 3rd season. The birds form lasting pair bonds and mate for life. 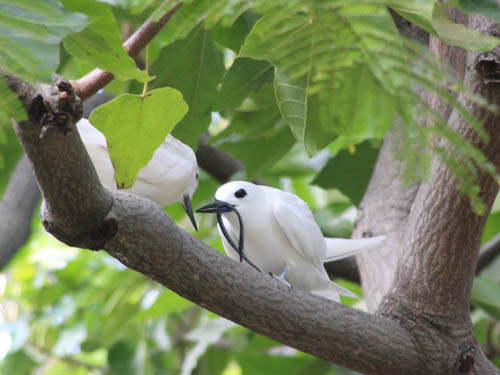 Food offerings are part of the courtship and demonstrate the bird’s parental ability and hunting prowess. Surfers at Ala Moana sometimes see these terns hovering 10 feet over the water and skimming the surface to catch prey. 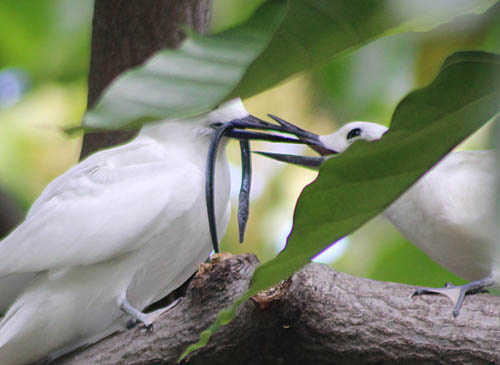 When I zoomed in to see what it was — a long slender needlefish — the female stepped forward with its clawed webbed feet to accept the offering. Webbed feet enable the seabirds to dive and swim in the ocean while claws at the end of each toe enable the bird to grasp the tree without fail. 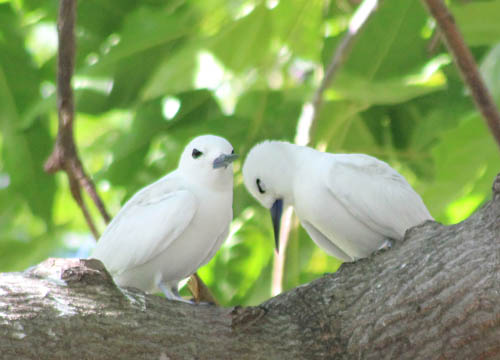 Manu-o-Kū have expressive eyes and engage in a number of charming courtship gestures that are entertaining to watch. 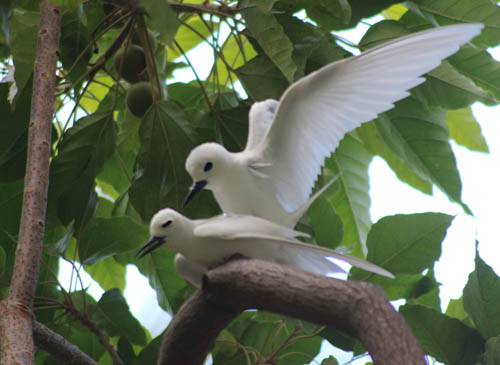 Breeding season is generally in January through June with pairs laying a single egg at a time. 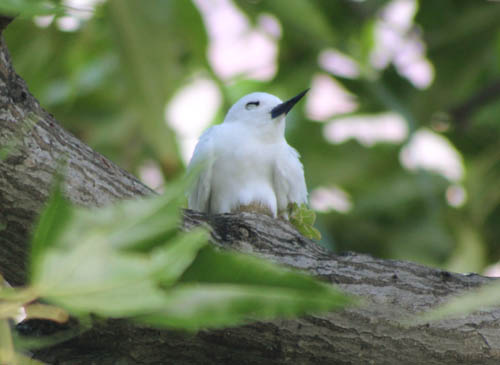 The birds do not build a nest. Instead they lay a speckled egg in a knot on a tree, a crook in a branch, or other feature that secures the egg. Both parents incubate the egg for about 36 days in shifts lasting from 48 to 72 hours long. 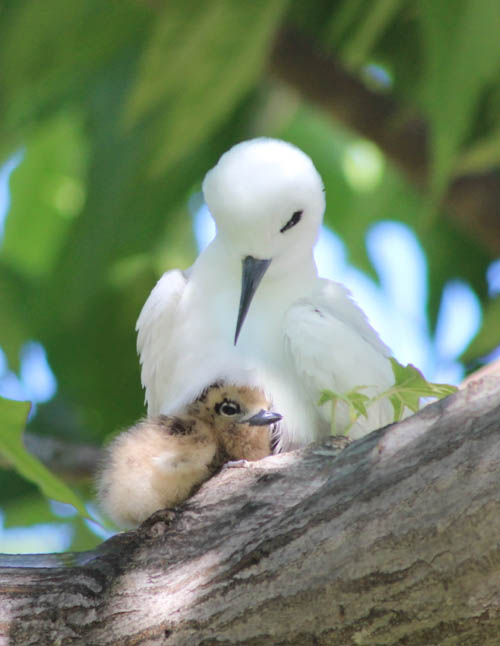 When baby chicks hatch they are mostly brown in color and covered with a fuzzy down. 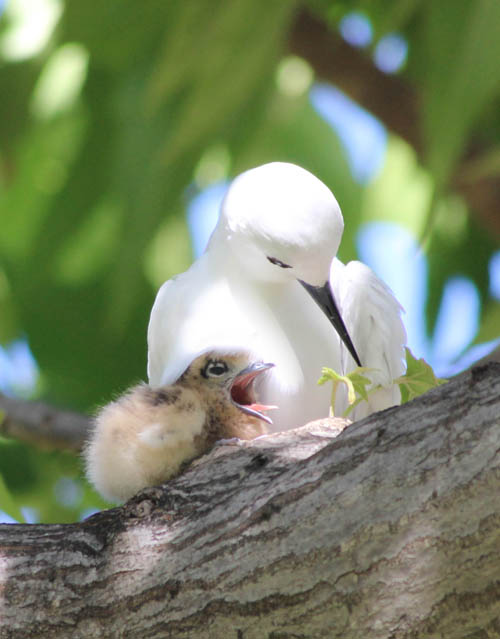 Chicks require lots of food so the parents take turns watching and hunting for the chick. 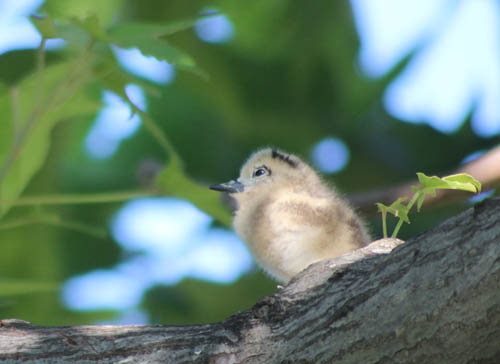 When the chick becomes a week old, providing food becomes full time work and the chick is often left unattended. 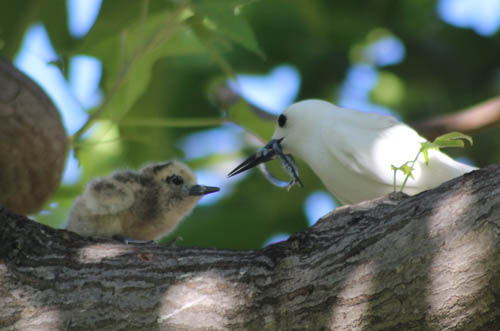 But its parents always return with a tasty a meal — in this case a long needlefish. Unlike other birds who regurgitate partially digested food, the terns feed their chicks fresh whole prey. 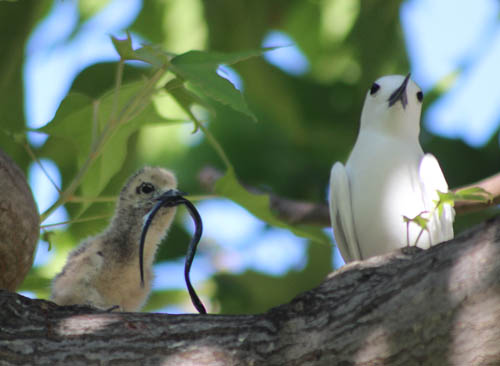 The slender needlefish was longer than the chick itself and was it was amusing to watch the chick struggle to swallow its meal. 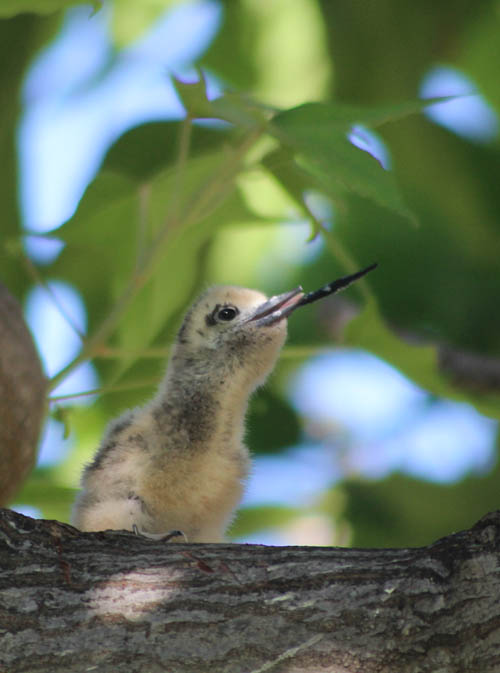 After several minutes of head jerking and wing flapping the chick finally succeeded. See the video at the end to watch the cute little chick swallow the needlefish whole. 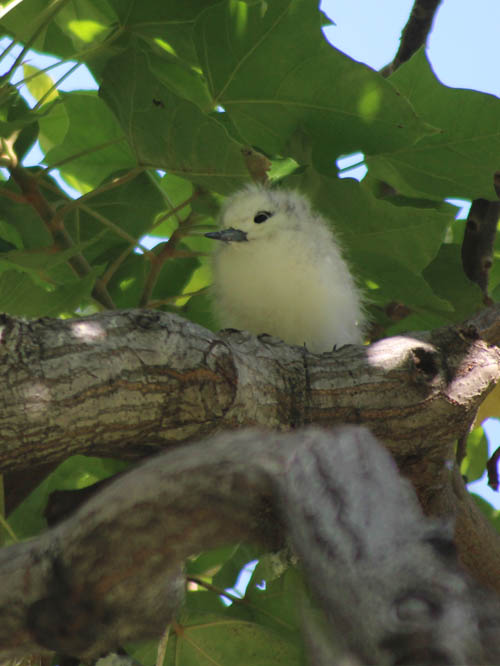 Chicks grow rapidly over the next few months and begin to turn white. 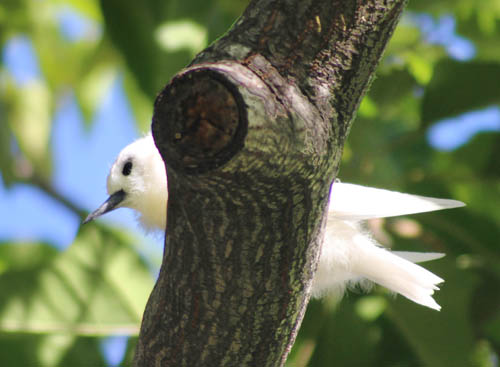 Adult feathers begin to sprout and the chick flaps its wings to strengthen its wing muscles. Even after the chicks fledge parents continue to feed their chick for up to 2 more months until it can hunt and fend for itself.

White fairy terns are beautiful birds that are fun to watch. The next time you’re in Honolulu, take an urban hike to the heart of the civic center and look up. A fascinating drama plays out in the trees amidst the hustle and bustle of the city. What an amazing seabird!