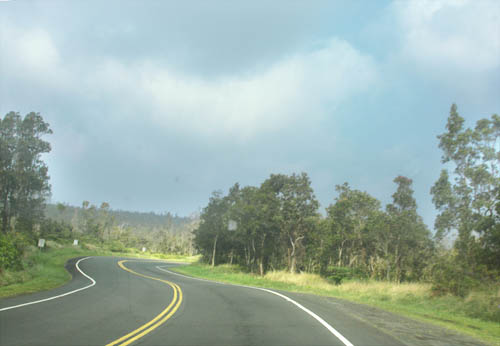 I hiked along the middle reaches of Wailuku River, the largest river in Hawaii which flows 26-miles down the slopes of Mauna Kea into Hilo Bay, to see the plants and animals that live halfway up the river.

The Wailuku River begins as a trickle at the 10,800 foot level of Mauna Kea and increases substantially in volume as drains the Hilo watershed.  The water volume at the mouth of Wailuku River averages 275 cubic feet per second making it the biggest river in terms of water volume as well as the second longest river in the Hawaiian Islands after Kaukonahua Stream on Oahu. 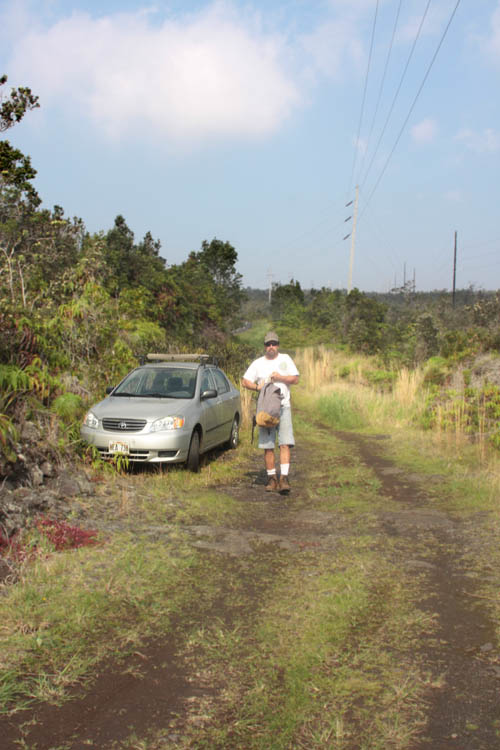 After parking the car alongside the lava road with utility poles and lines overhead, Pete Morton and I set off on foot.  We hiked downhill on the lava road for several hundred yards before making a 90 degree left turn onto a dirt road. 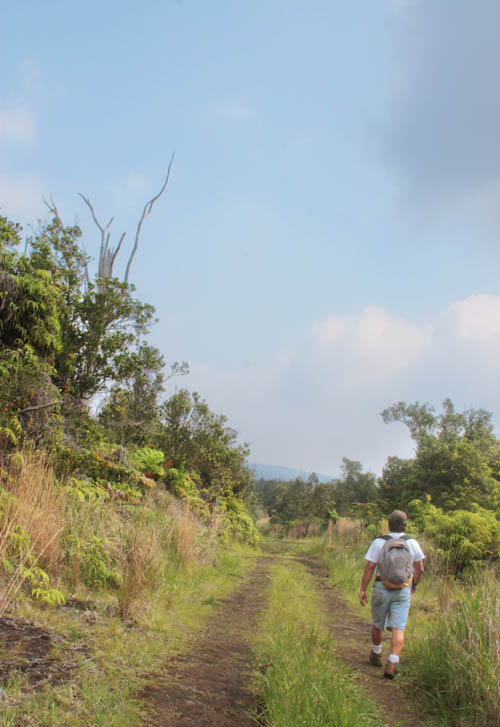 For the next 2 miles we hiked gently downhill along this dirt road which cut through a forest of ohia lehu trees.   Except for the grasses and weeds alongside the road, the vegetation was almost entirely native.  We crossed a small stream that flowed across the road and navigated around a number of deep puddles in the road before reaching Wailuku River at a point half-way up its 26-mile length. 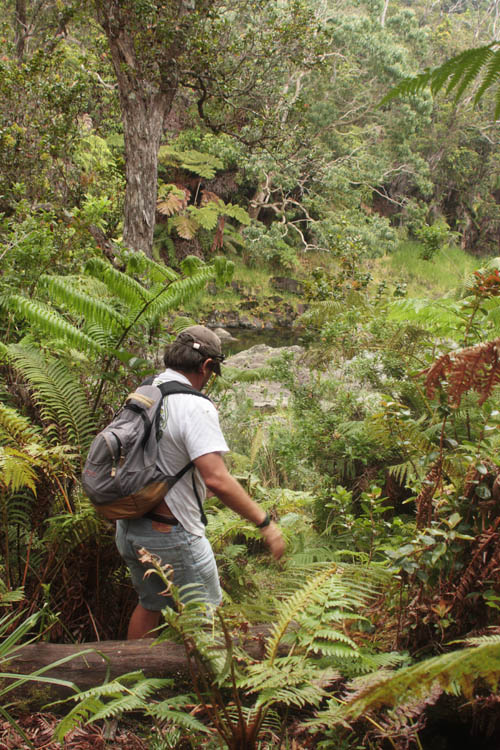 When we reached the river, I was reminded that the geological history of Mauna Kea included torrential rainstorms that scoured a river bed 50 to 100 feet wide in the lava rock. 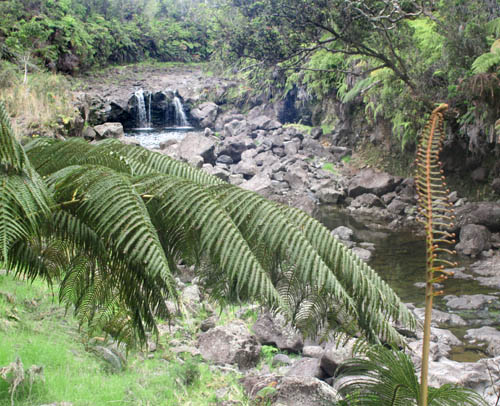 For the rest of the time — except when the ocasional rain storm hits — the river flows gently down a series of waterfalls, pools, rapids and meanders. As the river makes its way down stream, ground water contributes to the flow and the river grows considerably in volume. 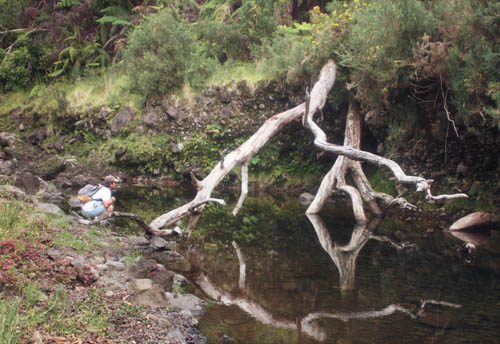 Rivers are especially vulnerable to invasive species because the water way provides an easy way for them to spread, like the dreaded gorse next to the fallen tree in the photo above.  The upper reaches of Wailuku River pass through pasture lands over-run with nasty thorny gorse.  Rain flushes their seeds into the river and distributes them downstream. 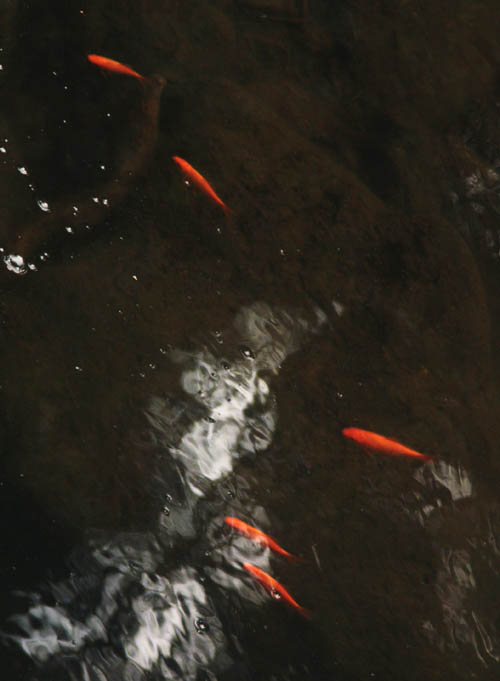 Exotic fishes, such as these golden sunfish or talapia were originally set free at the mouth of the river in Hilo.  They multiplied, spread, and established themselves up the farthest reaches of the river.  Invasive species run rampant in both directions in the Wailuku watershed. 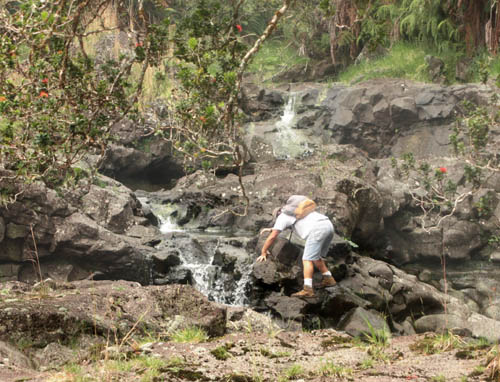 But native plants and animals live in Wailuku River as well.  When we saw an ohia tree with scores of red lehua blossoms, we scrambled down a slippery cascading waterfall to get a closer look. 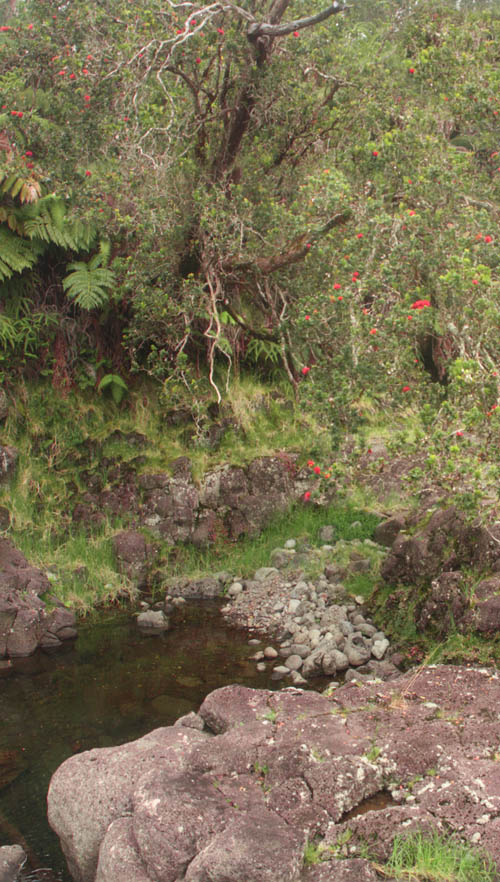 The unexpected thing about this ohia tree is that its red lehua flowers dangle over a small stone beach along the river creating an idyllic scene. 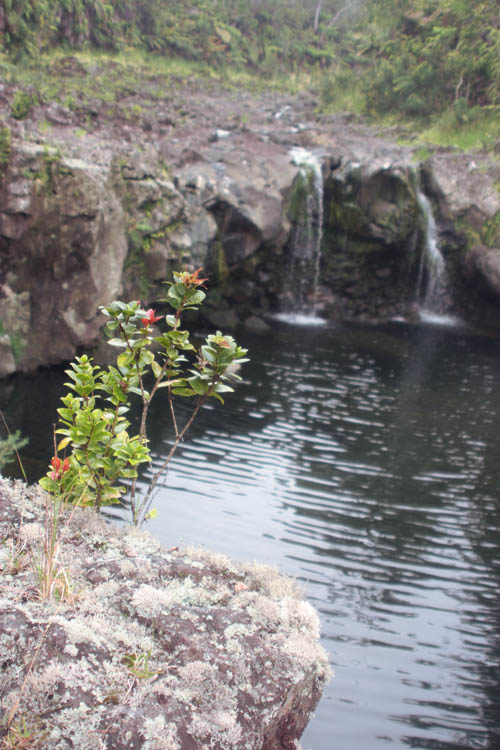 Each turn along the river brought a new surprise like this ohia shrub growing alongside a pair of waterfalls at a mountain pool. 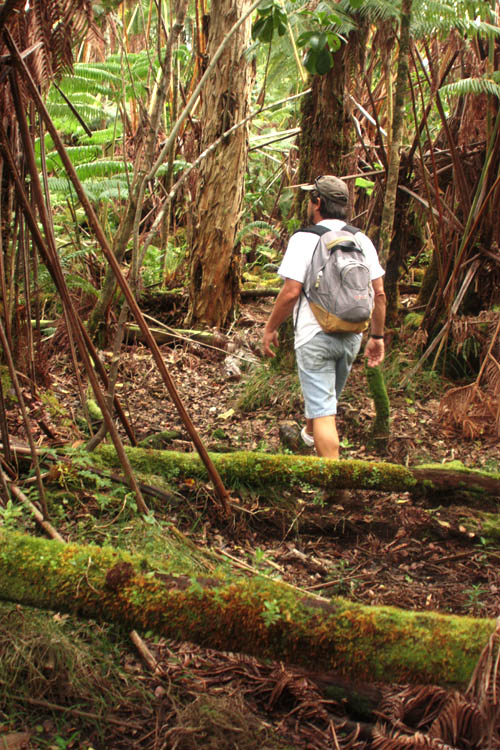 When pools and/or cliffs blocked the way, we climbed up out of the river bed into the native forest along the banks and emerged at a point further downstream.  Hapuu tree ferns, ohia trees, and other native plants thrive along the banks of the waterway. 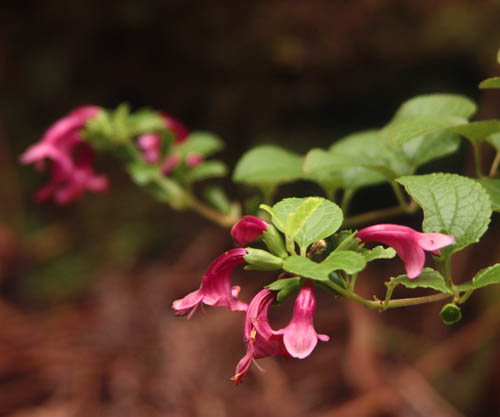 While making my way through a forest of hapuu tree ferns, I was thrilled to see a native mint (stenogyne calaminthoides) with cute little pink flowers growing as an epiphtye on the tree ferns. 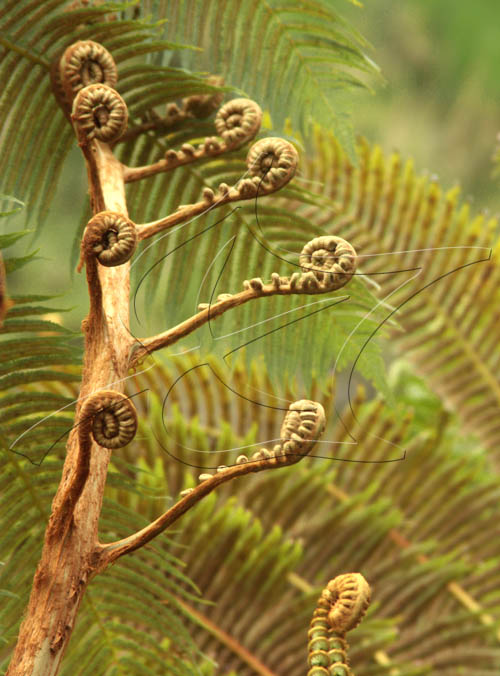 Hapuu fiddleheads have always captivated me for the growth they represent and the beauty of their geometic spiral.  It never ceases to amaze me to see fiddleheads unfurling themselves into giant tree fern fronds. 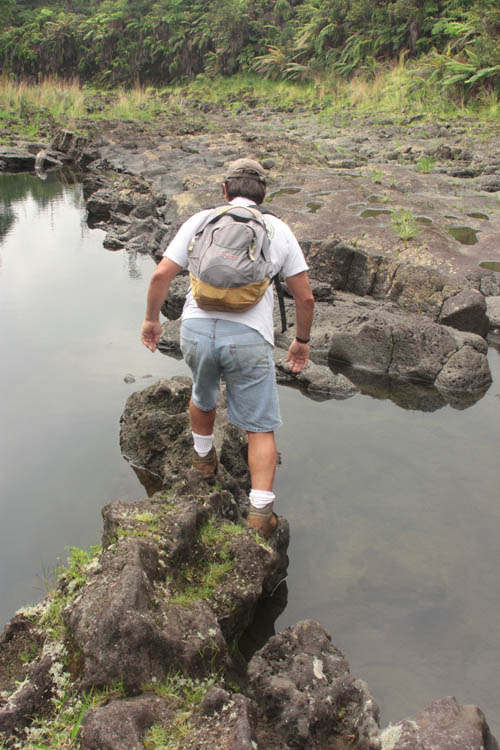 After emerging below the cliffs and pool, we continued downstream to see what was around the next turn in the river.

After making our way down a few meanders, we came across a 20 foot waterfall that plunged into the biggest and deepest pool we had yet seen. 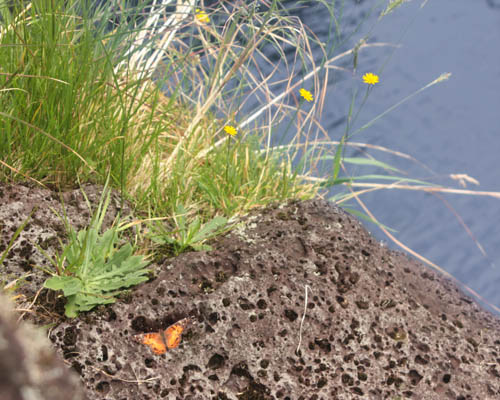 While exploring a ledge overlooking the pool, I was thrilled to see a pulelehua about 3 inches across sunning itself on a rocky ledge over the mountain pool. 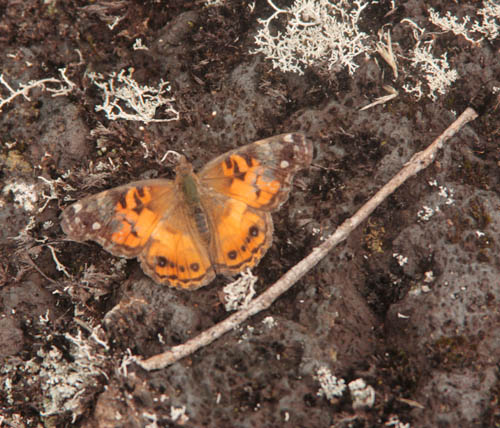 This butterfly is not native to Hawaii but is closely related to the Kamehameha Butterfly that was just adopted by the State of Hawaii as the official State Insect.

When the wind direction changed and the clouds began to drizzle, we decided to turn around and climb upstream to return the way we had come.  As we hiked back put we were treated to a new perspective of the same waterfalls and pools we had seen but from the opposite direction.  The Wailuku River is a beautiful place with one breath-taking sight after another.