We hiked into upper Kaluanui Valley to explore the series of waterfalls that plunge down the hanging valley above Hau’ula on the Ko’olauloa coast of windward O’ahu.

Kaluanui is an amphitheater valley with a hanging valley that starts at about 1,600 feet elevation where a series of waterfalls — the largest being 500 feet tall — have been carved into the rock.  The last of the large waterfalls is 90 foot Kaliuwa’a — Sacred Falls — where a rock slide killed seven hikers and injured scores more in 1999 which resulted in the closing of the trail to Sacred Falls in lower Kaluanui Valley.

Starting well before daylight, Pete Clines, August Smith, Duc Ong, Nectar, and I pushed-off from Hau’ula Homestead Road to hike the Ma’akua Ridge Trail that leads up Papali Ridge and connects with Wahilahila Ridge.  We then took the Kamapua’a Trail that leads to the Castle Trail and dropped down into upper Kaluanui Valley.  Kaluanui Valley is the traditional home of Kamapua’a, the man-pig demigod best known for his romantic pursuit of Pele, goddess of fire. 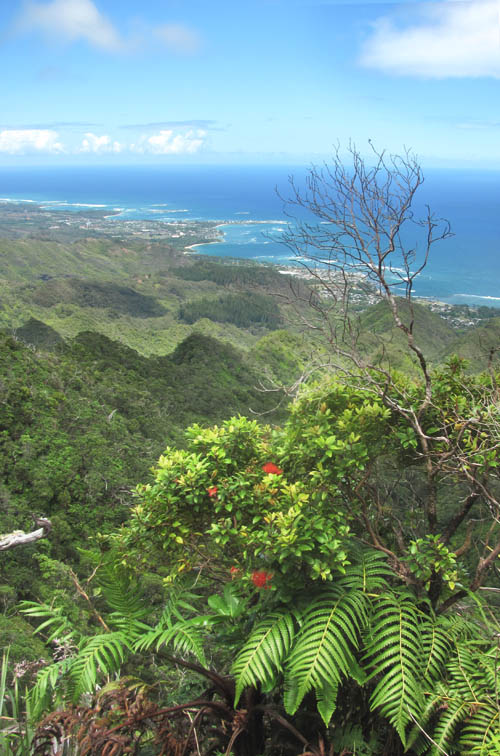 When we reached the junction of Papali Ridge and Wahilahila Ridge at about 1,900 feet elevation, we admired the view of Laie Point on the coastline with lehua ‘ahihi (Metrosideros tremuloides) and hapuu (Cibotium chamissoi) in the foreground.  The area is dominated by ‘ohi’a lehua trees many of which are covered with moss but invasive plants such as Koster’s Curse (clidemia hirta) and octopus trees (Schefflera actinophylla) are making serious inroads in the otherwise native forest.

After reaching the junction with the Castle Trail at about 2,400 feet elevation, we dropped down the contour trail into upper Kaluanui Stream at about 2,000 feet elevation.  The water was cold and clear, and meandered down a series of pools, small waterfalls, and rapids.  Native plants thrive along-side the banks of the stream such as these beautiful native ferns — ama’u (Sadleria cyantheoides) and pala’a (Sphenomeris chinensis). 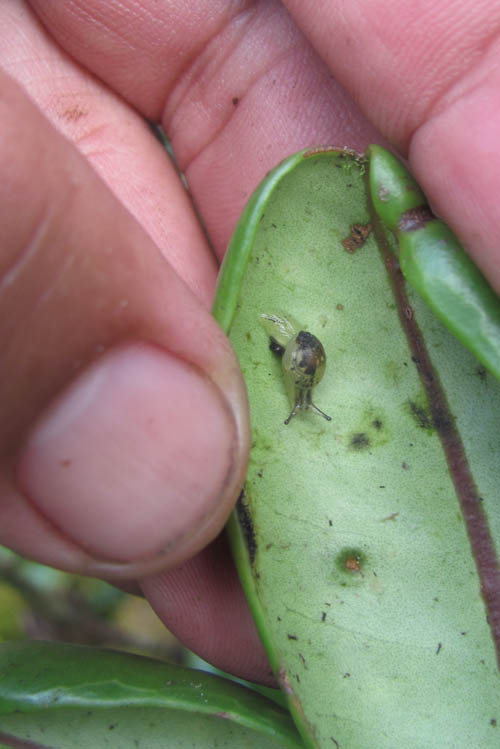 One of the more charming creatures we saw were native snails — pupu kuahiwi — which go by the more memorable name “snot in a hat”.  This  small succineid snail (Succinea catinella rotundata) was a little more than a quarter inch long and is the most widespread of the native snails today.  I was pleased to see a number of pupu kuahiwi under the curled leaves of alani (Melicope spp.).

The rocks in the stream were covered with an algal film that made them slick and slippery.  So we proceeded downstream carefully until we reached the first major obstacle — a waterfall about 90 feet tall.  Pete found a detour which allowed us to drop down to the base of the falls and we continued past a bend in the stream with a couple of small waterfalls and pools.  We continued downstream until we reached a 3-tiered waterfall at about 1,900 feet elevation where the canyon opened-up and provided our first glimpse of the coastline. 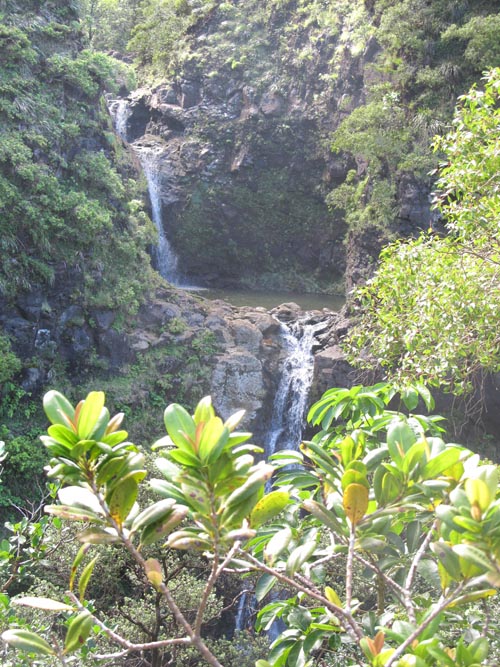 Since Pete did not want to leap off the third falls he climbed back up the 25 foot falls which meant climbing up a 15 foot overhang that required pure upper body strength.  The photo above shows the 3-tiered falls from a distance where the overhang can be seen.  Several of us spent the time searching for a way to climb up the walls of the canyon to climb up, around, and past the 3-tiered falls.

After multiple false starts, we found a way to climb the steep slippery wall of the canyon to by-pass the 3-tiered waterfall.  We installed a rope which allowed us to come back more safely on the return leg our our adventure.  The views from the by-pass route were spectacular and we were able to see even more of the coastline from our vantage point.  I was pleased to see a number of ‘ahihi (Metrosideros tremuloides) in bloom with red lehua flowers as we dropped down a side gully to the base of the 3-tiered falls. 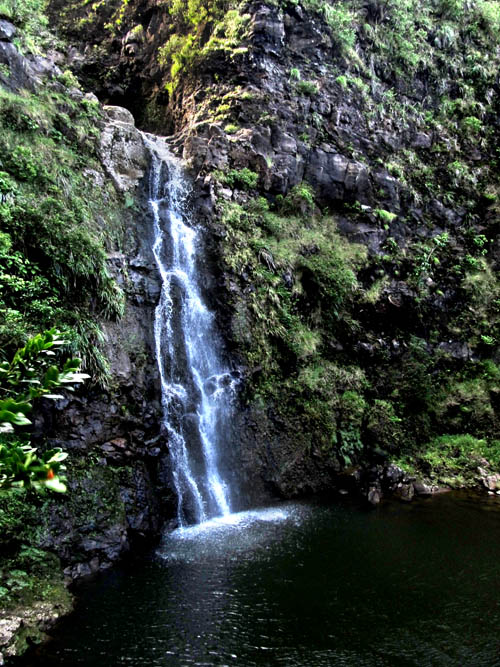 The by-pass route descended a side-gully that led directly to the base of the third waterfall (shown above) in the 3-tiered falls.  One of the difficult things about this adventure was how cold and windy it was in the canyon.  The walls channeled the wind and a near constant breeze blew through.  It was difficult to keep warm as we made our way downstream.

After a short distance we reached another series of pools and small waterfalls where Pete installed a rope to get back up again.  Pete and Duc continued down the pools while the rest of us found a sheltered spot behind the rocks to shield ourselves from the wind and preserve body heat. 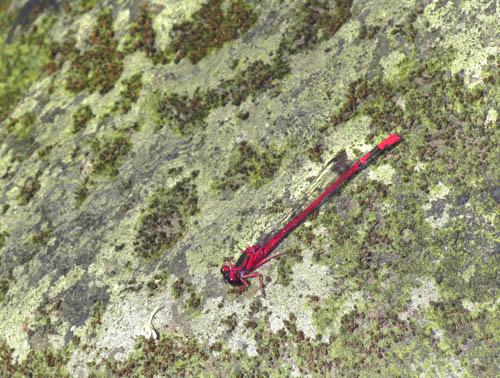 While we waited for Pete and Duc to see out what lay on the far side of the pools, a red damselfly  — pinao’ula —  (Megalarion spp.) no more than an inch long darted about and landed on a boulder beside me.  I was pleased to see several of these endemic insects — which are fierce predators in the native landscape — in the canyon. 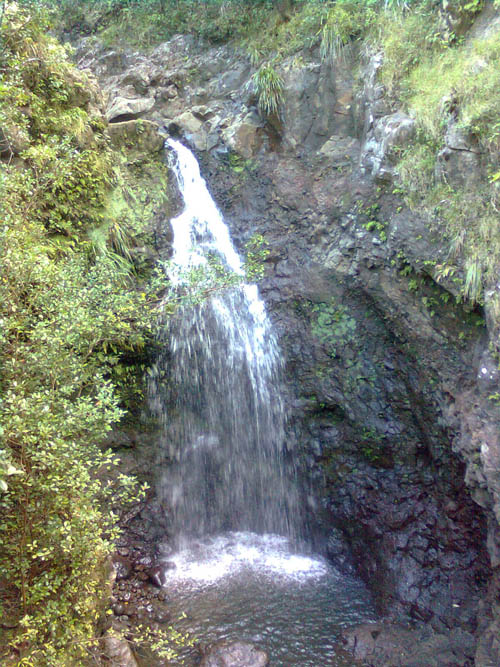 Pete and Duc made their way to the far end of the pools where they could see a waterfall that fanned out at the bottom.  From this vantage point they could see the canyon walls curve to presumably where the 110, 250, 300, and 500 foot waterfall reside.  But there was no easy way to proceed further down the canyon and since time had run out — we reached our turn around time for the day — we could go no further.  So Pete and Duc climbed back up and we all turned around to head upstream and make our way back out.

While heading back upstream to return the way we had come, we saw a number of kokio keokeo (Hibiscus arnottianus) — the native hibiscus tree with large white flowers, red staminal columns, and yellow pollen. 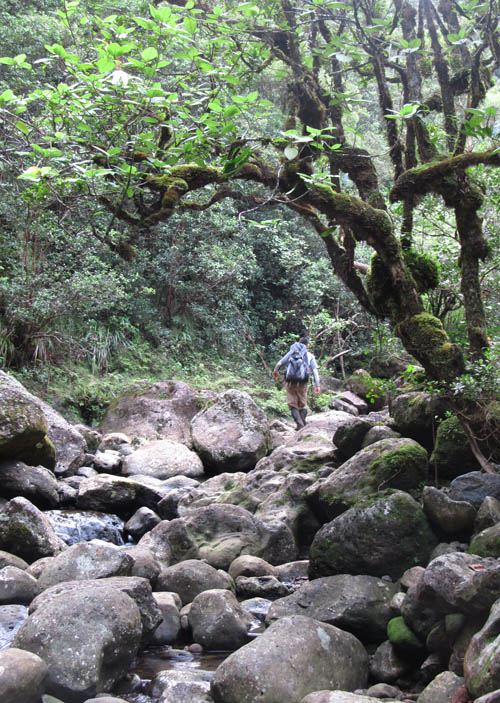 Some of the hibiscus trees along the banks of the stream reached an impressive 25 feet tall and were covered with a profuse growth of moss. 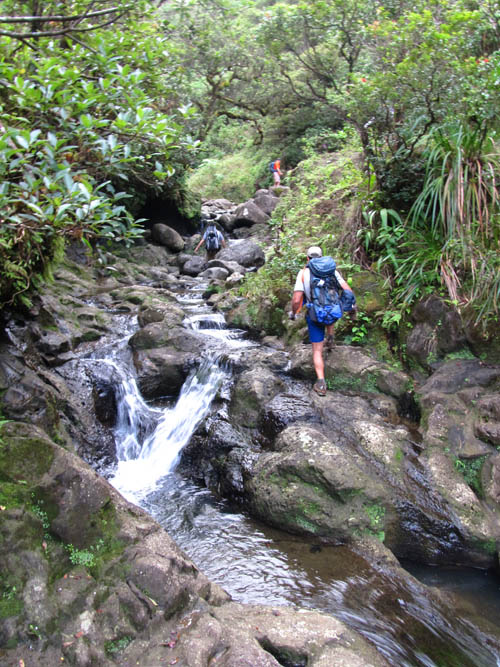 While making our way upstream and then back up the Castle Trail to return the way we had come, we marveled at the feat achieved by HTMC legend Dick Davis — who descended the entire length of Sacred Falls Canyon — and Merlin Merman and his friends — who repeated the feat in 2007. We also reflected on the great time we had descending the smaller waterfalls in the upper canyon and seeing a host of native plants and animals along the way.  What a great adventure!

WARNING:  The series of waterfalls in upper Kaluanui Valley descend an extremely narrow canyon that is notorious for flash floods.  The canyon is exceedingly dangerous and any descent down Sacred Falls Canyon should only be attempted by trained canyoneers.  The 250, 300, and 500 foot waterfalls beyond the point we reached are extremely difficult to descend and once you are over them you are committed — the journey is a one-way trip downstream.  In order to pass them safely, canyoneering equipment — harnesses, carabiners, ATC’s,  ascenders, daisy chains, and a thousand feet of rope — are absolutely necessary.  Do not attempt this without first reading Merlin Wollenzien’s harrowing account, making bailout and emergency plans, and preparing with the proper equipment and training.

The music in the video clips is from Sonic Adventure — Circuit and Peace — under a Creative Commons License through BeatPick.Com