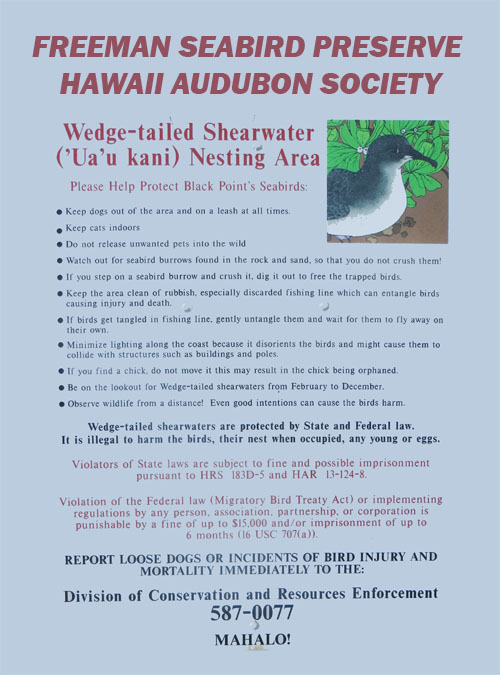 I went to Kūpikipikiʻō to see wedge-tailed shearwaters towards the end of breeding season.

Located along the southern edge of Black Point, Kūpikipikiʻō is one of a handful of breeding colonies of ʻuaʻu kani or wedge-tailed shearwaters (Puffinus pacificus) on Oʻahu. Known as the Freeman Seabird Preserve, the land was donated by Mr. and Mrs Houghton Freeman to the Hawaii Audubon Society in 2007.

Over the past 5 years, volunteers have put in many hours removing trash, weeding invasive plants, and planting native coastal plants.  I heard many good things about how the natural habitat was being restored and had to see the preserve with my own eyes.

Not long after I arrived, a rain squall blew in from the east.  I had just enough to take this semi-panoramic shot of the Kahala Beach and Maunalua Bay and seek shelter before the rain fell.  I ducked behind a stone wall under the cover of a beach heliotrope tree to escape the rain. 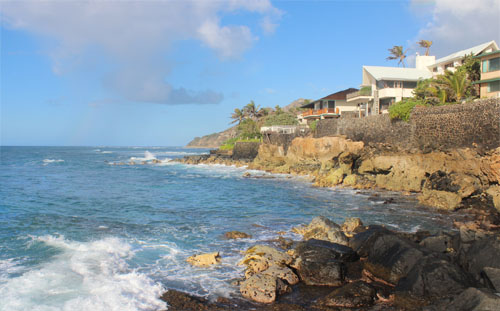 When the rain ended, I made by way along the shore to get a feel for the roughly 1 acre site located on a rocky point of land that juts out between Diamond Head and Kahala Beach. 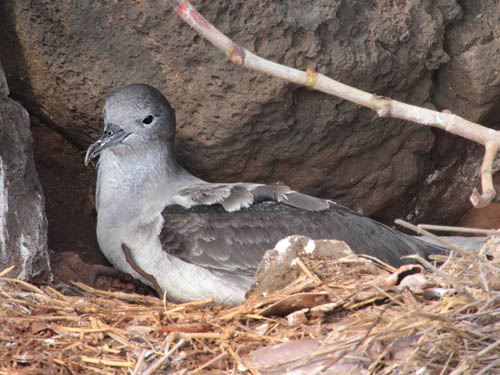 Wedgetailed Shearwaters are one of the most common seabirds in the Hawaiian Islands. The medium-sized petrel is found throughout the tropical Indian and Pacific Oceans with an estimated population of 5.2 million birds. 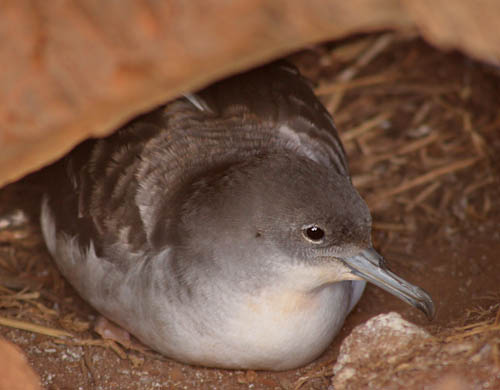 The vast majority of wedge-tail shearwaters in Hawaiʻi breed in the Northwest Hawaiian Islands — Laysan, Nihoa, Lisianski, Kure and Pearl and Hermes, Midway, Necker, French Frigate, and Gardner Pinnacles — which is estimated at 230,000 breeding pairs. 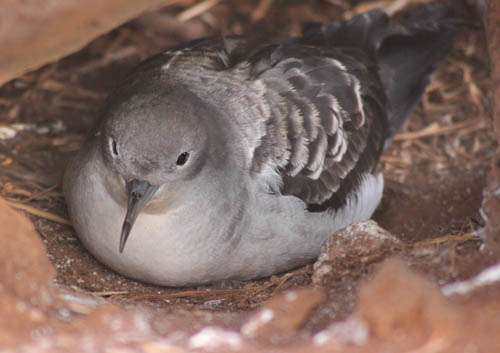 The main Hawaiian Islands have an estimated 40,000 to 60,000 breeding pairs.  On Oahu, the largest colonies are on  the offshore islets of Manana, Mokulua, and Mokumanu, where predators cannot get to them. 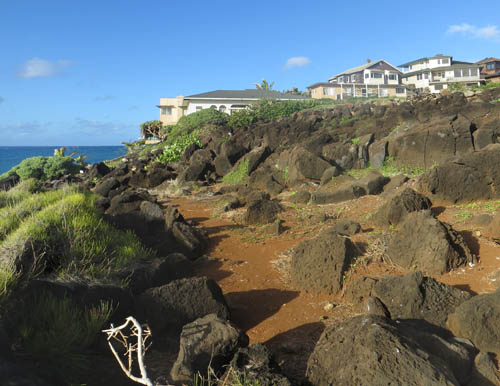 The Freeman Preserve is covered with basaltic rocks and boulders.  I made my way over several trails that crisscross the preserve.  When I looked under and between the rocks, I saw dozens of shearwater chicks. 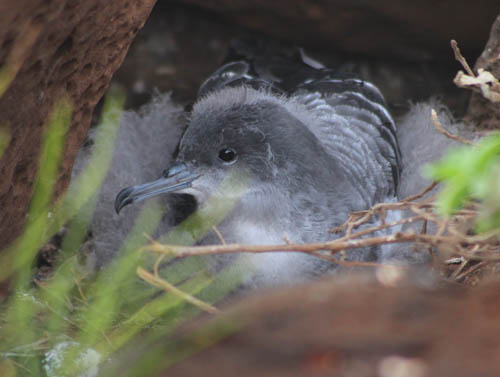 Most shearwater chicks fledge by the end of November so my visit was late in the breeding season. 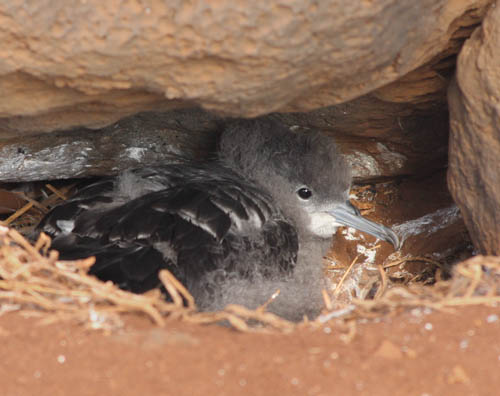 Most of the chicks were well on their way growing adult feathers but their heads and bodies were still partially covered with fuzzy down. 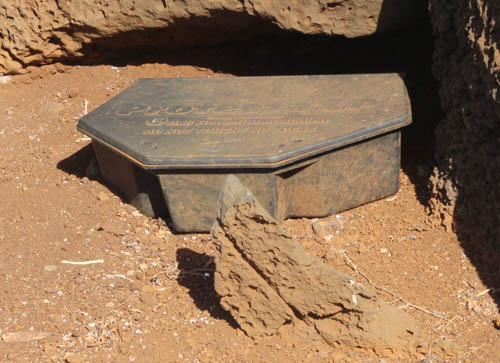 Rat bait stations and traps where distributed throughout the preserve to reduce the number of rats and other predators. 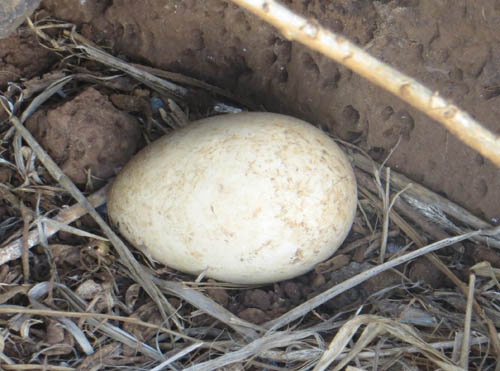 Most breeding pairs lay their eggs in June, but I saw a few eggs as I made my way around the colony. 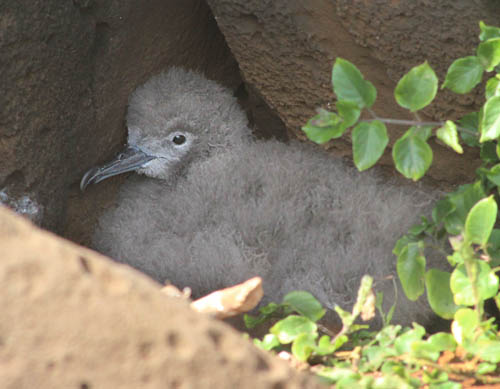 There was even a newly hatched baby shearwater chick completely covered in fuzzy down. 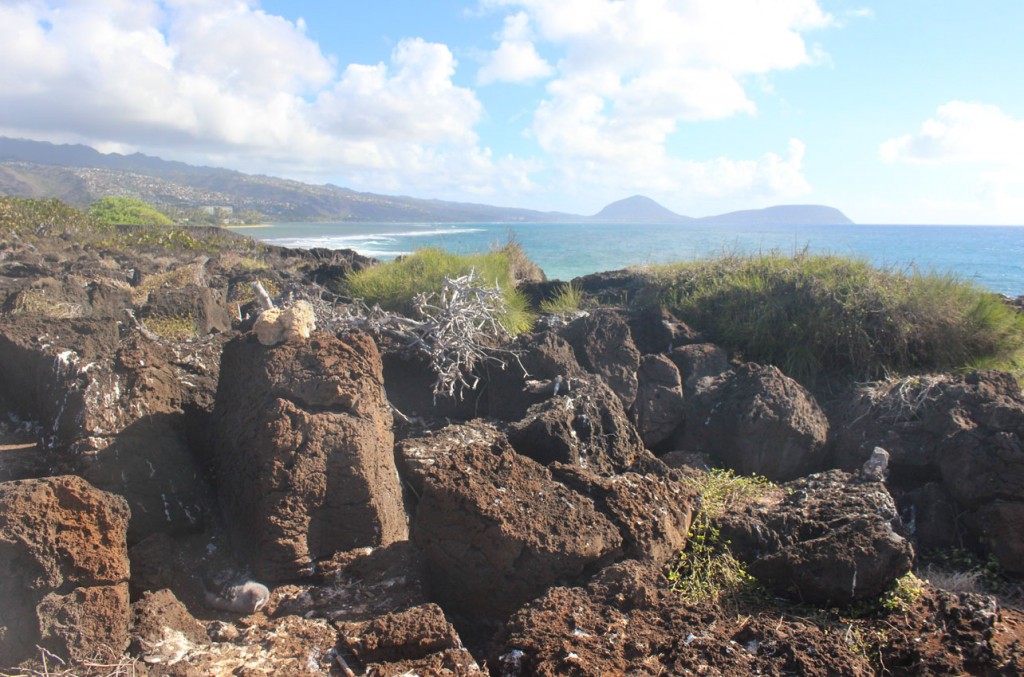 Some of the larger chicks were outside their burrows.  I enjoyed seeing the chicks walk awkwardly on their pink webbed feet. Enlarge the photo above and look closely in the bottom left corner to see a chick between the rocks. 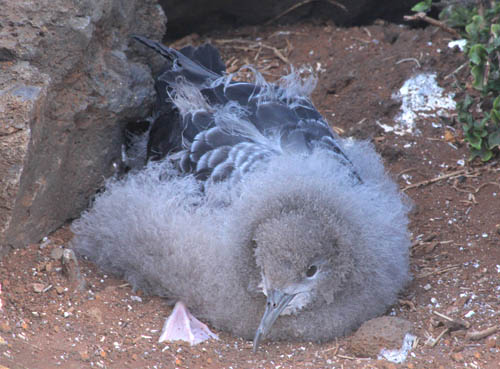 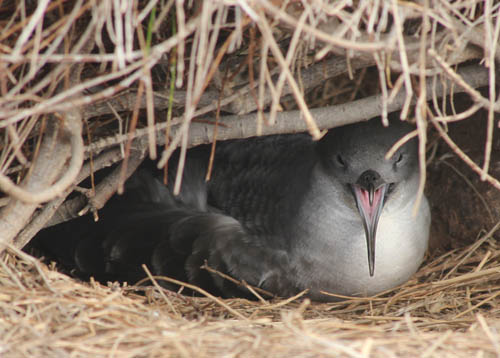 Getting food for the chicks is a full time job, and many adults hunt at sea during the day — but not all — some where resting under iron wood trees. 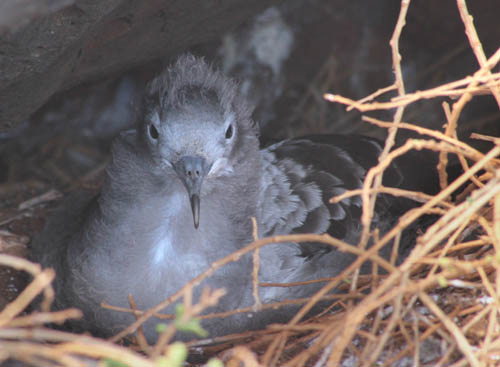 Adult feathers grow from the back end of the bird forwards — the head is the last to lose its down. 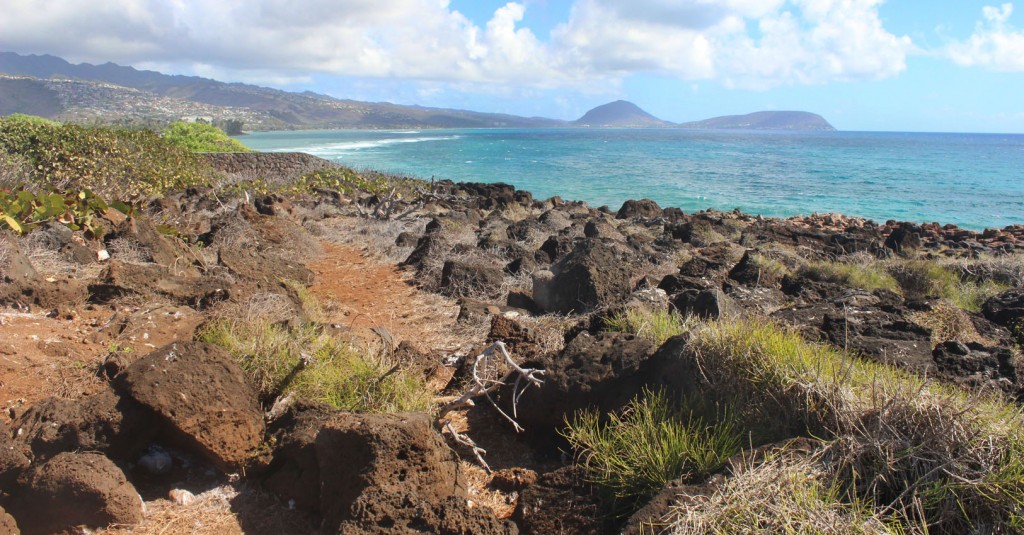 Most of the chicks were between and under the rocks.  If you look closely in the bottom left hand corner of the above photo you can see a chick hidden in the shadows between the rocks. 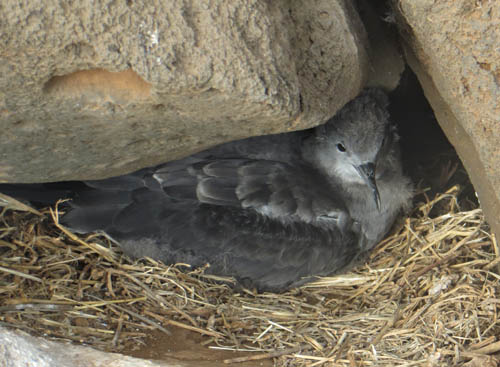 Most of the birds are lodged into tight fitting spaces between and under the rocks. 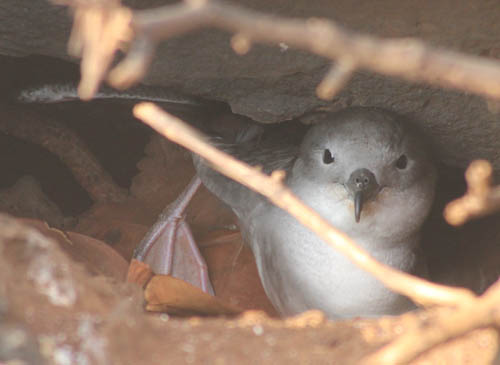 Some birds have large burrows which permit them to stretch their legs and wings underground. 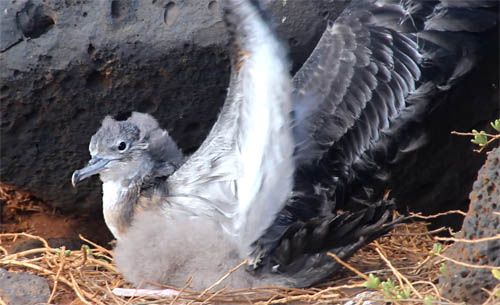 But most have small burrows that are too confining and must come out to stretch and exercise their wings. 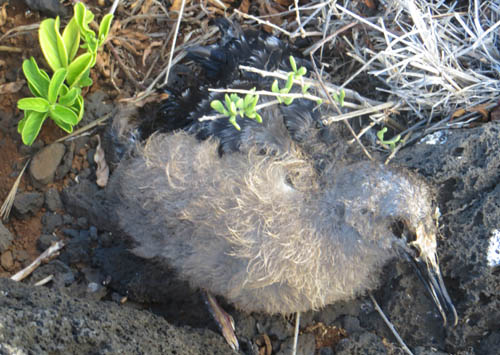 One of the sad things I stumbled upon was the dessicated remains of a chick that did not survive — about 30% do not make it through the season. 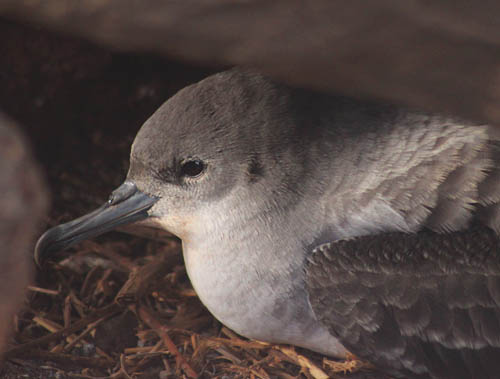 Time passed quickly as I made my way around the preserve to photograph the chicks.  I was pleased to see the progress being made to restore the colony to its natural state and to see so many healthy chicks on the verge of adulthood.  What a great place to visit!