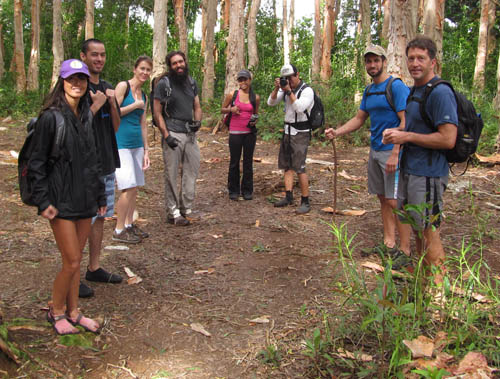 We hiked the Wahiawa Hills Loop to its furthest extent and floated down the north fork of Kaukonahua Stream to return where we started.

With heavy rains over Oʻahu for over a week, Pete Clines had a great idea — float down Kaukonahua Stream while the water level was high!  The Hawaiian Trail and Mountain Club (HTMC) used to do a “Kaukonahua Float” each summer so Pete called Kris Corliss who led the adventure for the club to get her advice on the best of several alternative routes we could take.

Our group — made up of Bushwhackers, 808 Goonies, and Lost Trailblazers — pushed-off from the tall water tower near the end of California Avenue in Wahiawa where large paperbark trees have been planted.  From left to right: Chenay Borja, Josh Serrano, Elissa Thompson, August Smith, Jenelyn Castillo, Cory Yap, Pete Clines, and Dave Webb. 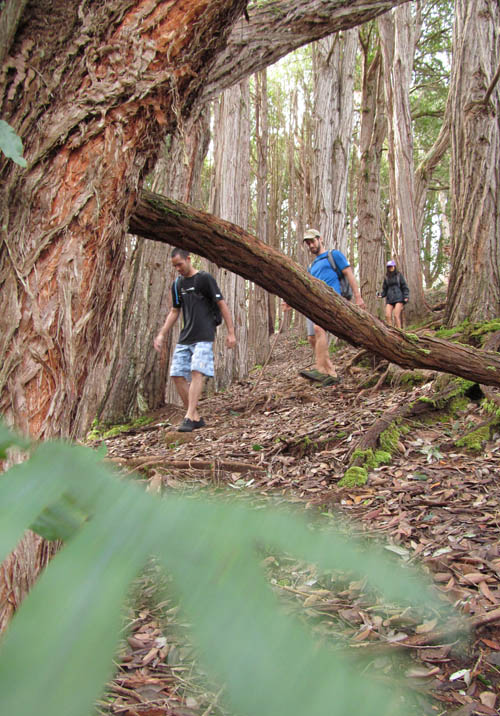 Given the heavy rains over the week, the descent under eucalyptus trees at the start of the Wahiawa Hills Loop was exceedingly slippery. 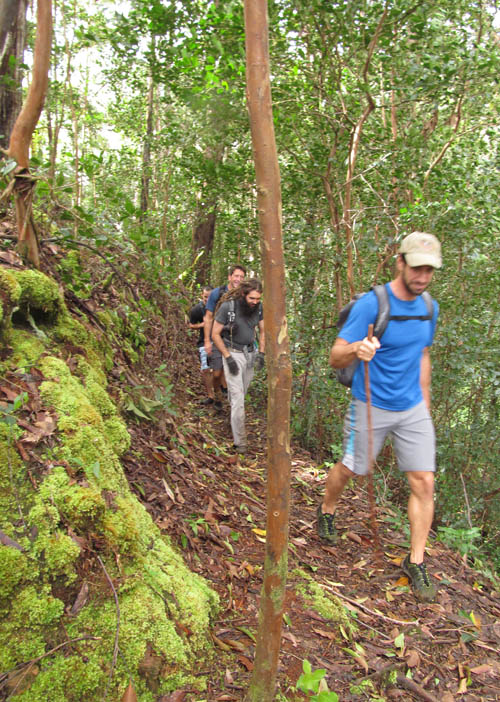 The Wahiawa Hills Loop is intersected by a network of hunter, and pig trails that crisscross the area and makes the way forward confusing even when you know the way.  Fortunately, several us of had hiked the loop before so even though we went astray a couple of times we were able to get back on course. 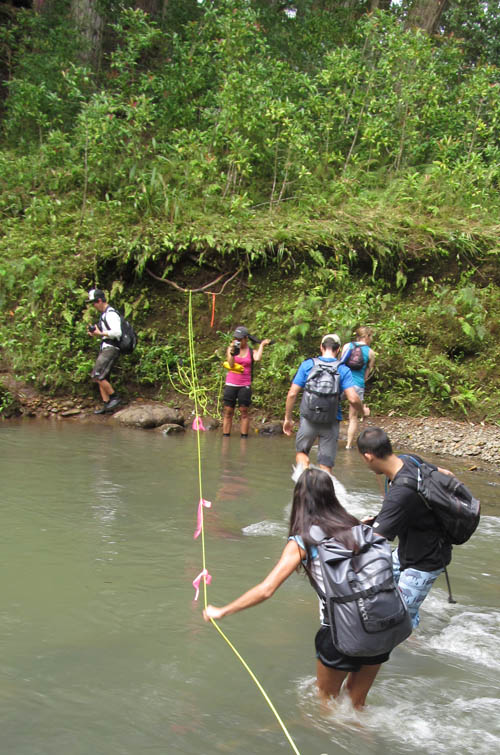 The first thing we did was drop down into Kaukonahua Stream where Pete tied a rope across the stream.  There are countless twists and turns in the meandering stream and it can be difficult to tell where to get out.  So we distinctly marked our exit point with a yellow rope on which we tied pink ribbons. 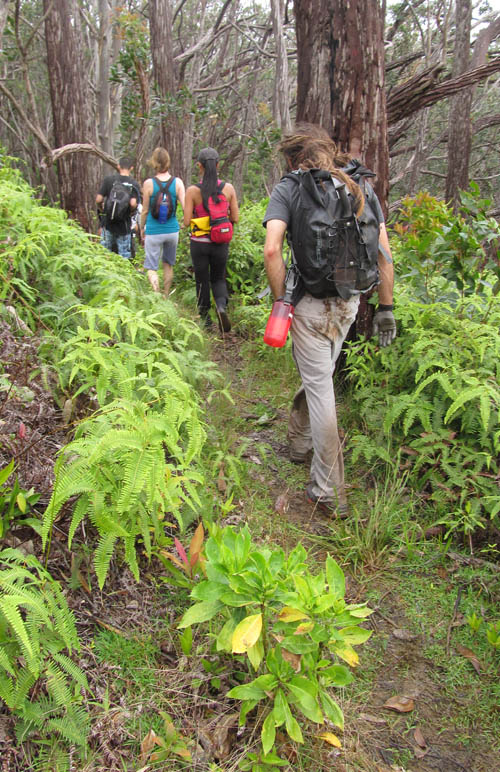 We then climbed out the stream and made our way on the Wahiawa Hills Loop through forests of large eucalyptus trees with ʻuluhe ferns and nauapaka kuahiwi in the understory. 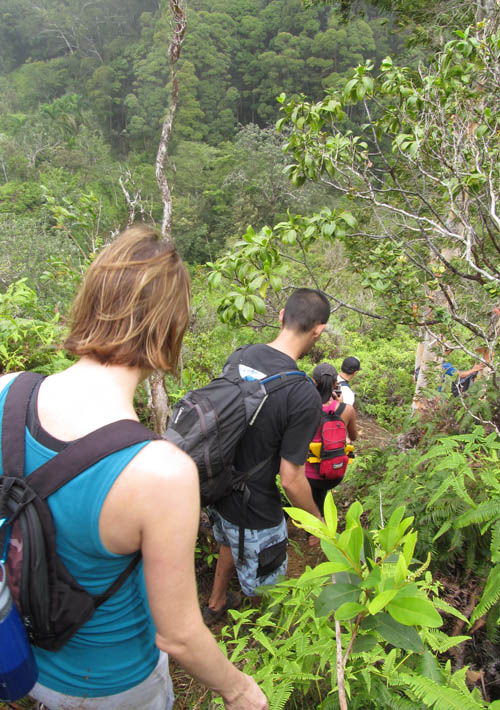 We hiked on the loop for a little more than an hour until we began a big descent to the stream — the furthest extent of the Wahiawa Hills Loop.  Although the stream was not clear it was not muddy brown.  Particulate matter in the water made the water somewhat milky in color which is normal for this stretch of Kaukonahua Stream.  Had the water been muddy brown my concern about leptospirosis would have been greater. 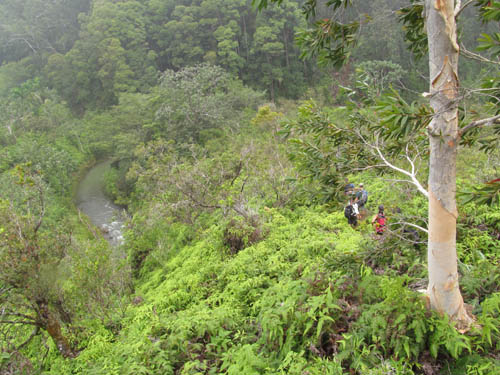 Leptospirosis can be a life-threatening bacterial infection transmitted when water contaminated by animal urine comes in contact with cuts and unhealed breaks in the skin, the eyes, or with the mucous membranes.  Although the risk of infection is always present, many leptospirosis cases happen after big rains when rainfall washes whatever is on the land into the streams.  Since over a week of heavy rains had fallen, my theory was that much of the leptospirosis bacteria would have already been flushed down the stream.  The bacteria would still be present but hopefully at reduced concentrations.

Kaukonahua Stream is the longest stream in the Hawaiian Islands when the north and south forks are added together for a combined total of about 27 miles.   The stretch we would be floating down meanders over the landscape making countless turns and twists that alternate from pools to rapids the entire way. 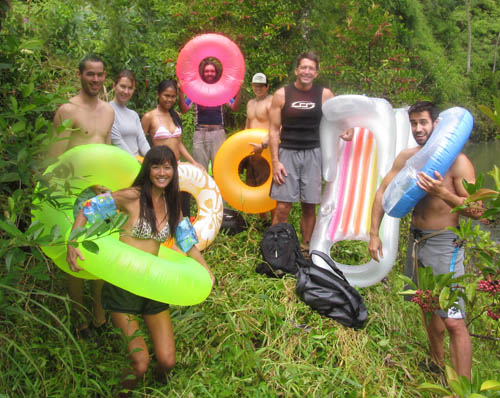 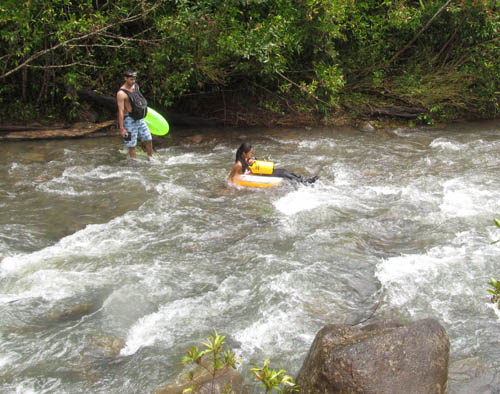 When we got into the waist deep pool we and plopped down into our inner tubes — brrr!  The water was cold!  But our bodies grew accustomed to the temperature and we pushed-off on our adventure down the first set of rapids!  Wheee! 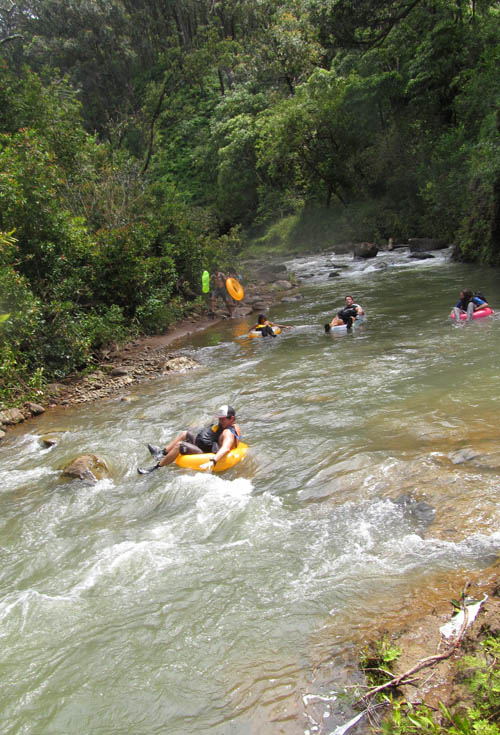 We had a blast picking up speed in the rapids that were at least a foot deep!  When the rapids got to 6 inches or less, navigating the rocks became crucial.  At several spots I poorly negotiated the rocky obstacles and got whacked on my shins, knees, and butt!  Ouch!

The excitement subsided whenever we reached a pool where we relaxed and enjoyed each others company as we floated downstream. 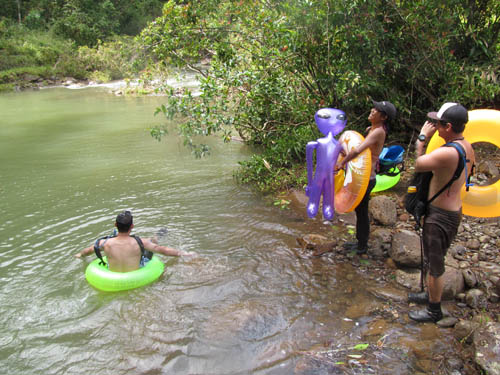 We encountered a strange unearthly sight on the banks of the stream — a purple inflatable alien!  We gave him a name — Alonzo — and brought him along for the ride. 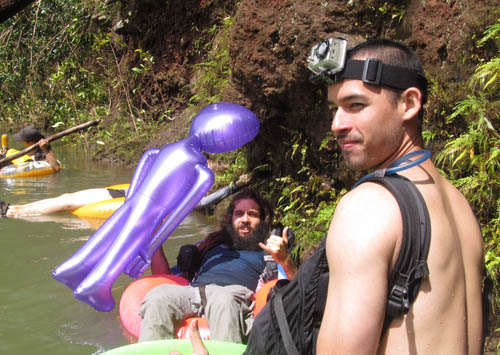 Alonzo was very popular and we all took turns carrying him downstream. 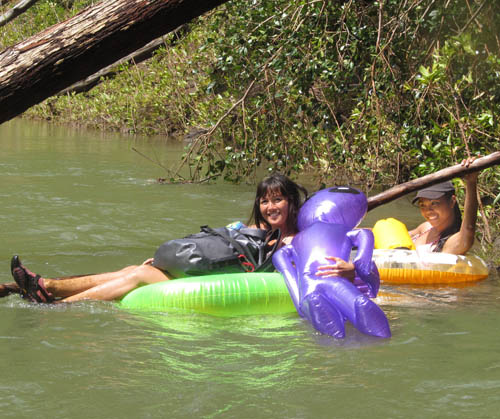 When we reached the first big tree that had fallen into the stream, we had our first mishap — Pete’s inner tube got skewered by a branch under the waterline and sank.  Fortunately, we were equipped with 4 spares so we blew up an inner tube and continued on our merry way. 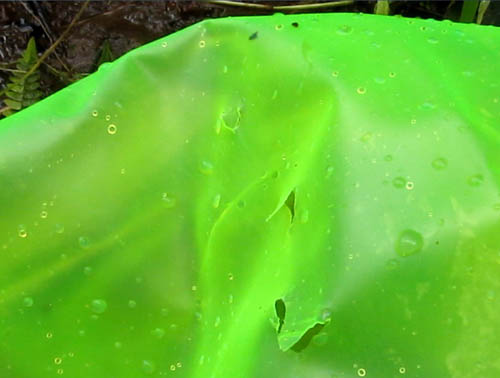 Not long after, Chenay’s tube got punctured and we blew up another spare.  But the spare had a defective valve and although we were able to perform a makeshift repair it sank ever lower in the water.  So we had to blow up another spare.

Much of the time was spent floating lazily downstream — splashing in the waist deep water.  Still waters run deep and we could not stand up in several of the deepest pools.  But shallow rapids would inevitably return — usually just around the next bend. 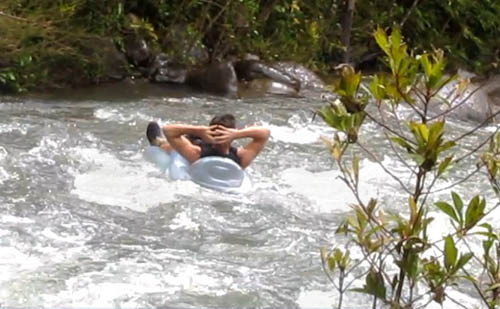 Dave was the only one to use an air mattress which was more buoyant and enabled him to float higher in the water.  So he was able to clear the rocks in the shallowest of rapids where the rest of us could not go. 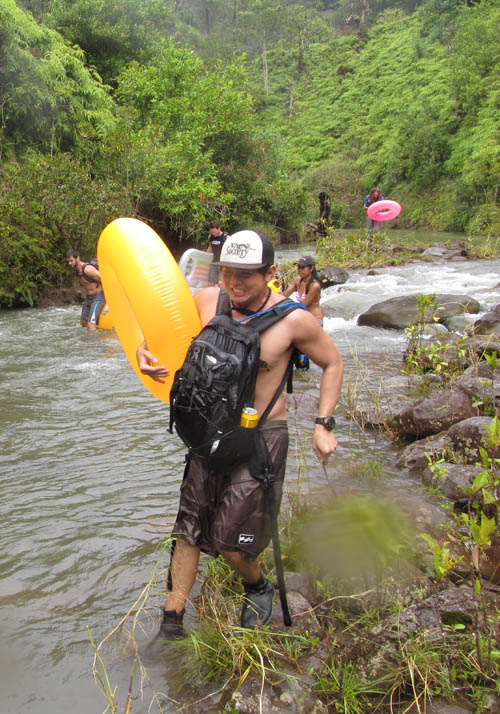 Cory had a big grin on his face for much of the time and the sound of his laughter filled the air as we made our way downstream. 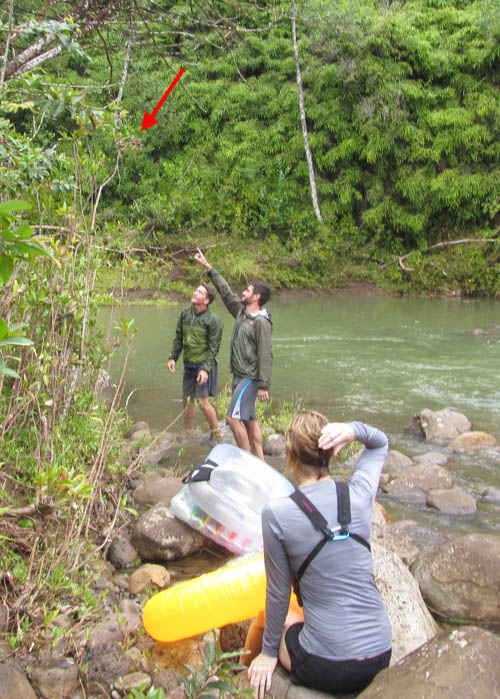 When we stopped for lunch at a narrow point in the stream, we marveled at just how high the stream level had risen — presumably within the past week.  Debris stuck in the trees — where Pete points to marked by the red arrow — indicated that the water level had been about 12 feet higher! 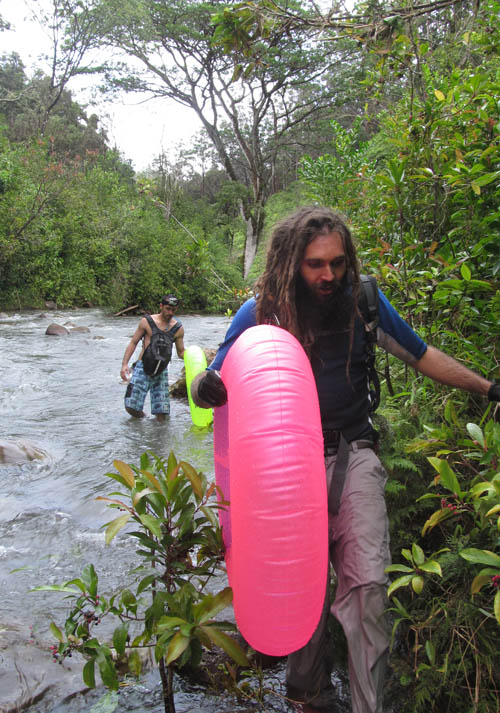 After lunch we continued downstream.  Several rapids downstream my inner tube got punctured on the rocks and deflated.  Fortunately, August was not far behind and saved the day with his spare tube — our last one.  So we were able to continue on our merry way. 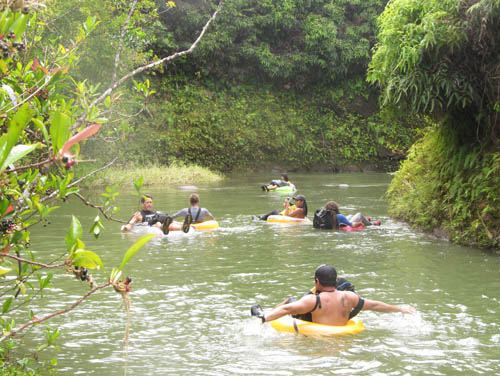 After four hours in the water we were cold.  There were so many twists and turns in the stream that although it was fun the stream seemed endless.  Pete reassured us that our exit point was “just a few more bends downstream” — uh-huh — but it never was. 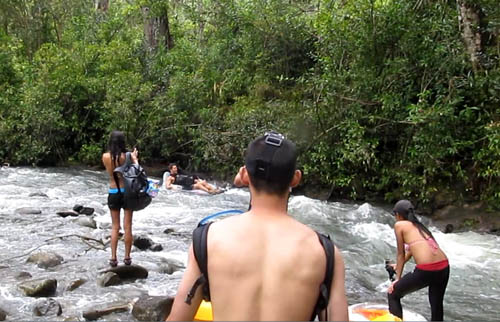 Towards the end, we were so banged up from the rocks that when ever we reached the next rapids we got out of the water to walk over the rocks.   Except for Dave that is, whose air mattress enabled him to ride the shallowest of rapids.  Take a look at the video at the end to see Dave floating down the rapids while the rest of us look on with envy. 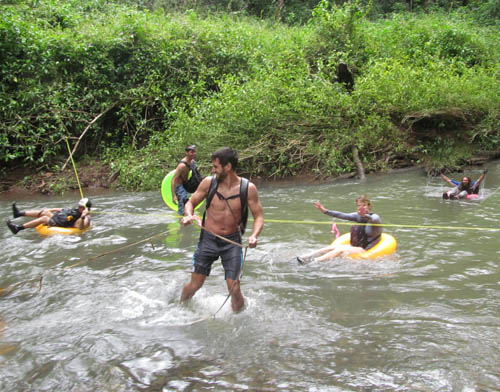 And then we saw it!  The yellow rope that marked our exit point!  It was nice to get out of the cold water and hike up the hills so we could generate badly needed body heat.

While making our way back to our cars, I could not help but replay in my mind the great time we had hiking the Wahiawa Hills Loop, floating lazily from one  pool to the next, and navigating the boulders and rocks through the rapids!   What great adventure!

FLASH FLOOD WARNING: Given the large watershed in Central Oʻahu drained by Kaukonahua Stream, flash floods are a danger.  Do not enter the stream if heavy rains are forecast.  Even if good weather is forecast monitor the water level at all times.  Rain can fall miles away and the water level can rise rapidly without warning.  Should the water start to rise, get out of the stream immediately and seek high ground.

HEALTH WARNING: It is nearly impossible to avoid getting water in your eyes or accidentally drinking a small amount of water.  Additionally bashing against the rocks and/or getting cut in the stream provides a way for leptospirosis to infect your body. Leptospirosis infections are usually systemic and causes a fever.  Illness follows a pattern similar to flu but often in two phases — a period of illness lasting a few days, then a slight recovery, followed by a second more severe period of illness. In mild cases the second phase lasts a short time and the patient recovers, but in severe cases the illness progresses rapidly, leading to organ failure and sometimes death.  If you come down with cold or flu-like symptoms within a month of exposure see a doctor right away.