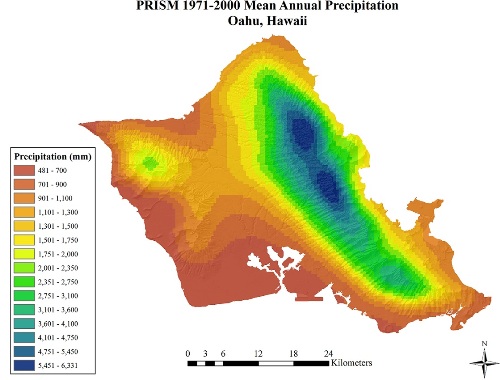 We hiked sections of the proposed Poamoho Fence which will protect the leeward headwaters of the Poamoho watershed in the northern Koʻolau Mountains of Oʻahu.

As a counter-measure against changing trade wind and climate patterns, the State of Hawaiʻi is increasing the ability of watersheds to attract and retain moisture.  The Hawaiian Islands are undergoing a drying trend.  For the past 20 years, rainfall has decreased markedly during the winter months — November to April — and has increased slightly in the summer months — May to October — although not nearly enough to compensate for the reduction in winter.  Since 1990 statewide winter rainfall has been 12 percent lower and continues to decline.

Governor Neil Abercrombie announced the State’s plan to double the acreage of protected watersheds in 10 years at a cost of about $11 million per year.  The Poamoho Fence and the Kaluanui Fence are two such projects being built in the region of the Koʻolau Mountains where rainfall is the highest. The fences will be built and managed by the Koʻolau Mountains Watershed Partnership (KMWP), Division of Forestry and Wildlife – Watershed Partnership Program (WPPG), Oʻahu Army Natural Resource Program (OANRP), US Geological Survey (USGS), Oʻahu Plant Extinction Prevention Program (OPEP), Oʻahu Snail Extinction Prevention Program (OSEP), and Kamehameha Schools (KS). 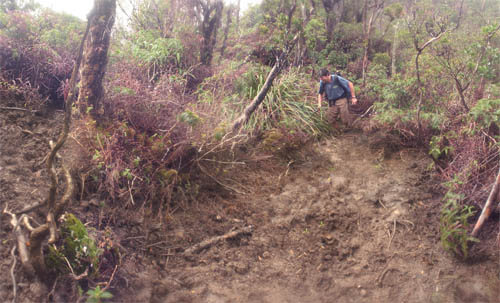 Pigs tear-up the landscape on the Kawailoa Trail

The Poamoho fence will be built in phases and eventually enclose some 1,500 acres of mostly intact native ʻōhiʻa forest.  The purpose of the fence is to prevent pigs from digging up the land and spreading invasive plants.  When pigs, goats and other ungulates browse native forests, they create openings for invasive alien plants such as strawberry guava, ginger, and other fast growing alien plants to take root. Many plants from elsewhere in the world have no natural enemies or pathogens in Hawaiʻi to keep them in check. Once invasive alien plants become established, they spread rapidly, and choke out the native species, resulting in a complete replacement of native forests with alien weeds.

When pigs run rampant in the watershed they dig-up the vegetation and roto-till the earth. So when heavy rains fall, nothing holds the soil back from washing into the steams.  Muddy torrents sweep down the mountains and wreak havoc on native stream ecosystems. The destruction continues when the muddy water reaches the ocean. Tons of soil settle on the sea floor and smother everything that lives there. Entire reef systems can be killed from the silt and freshwater that washes down from denuded mountain slopes. 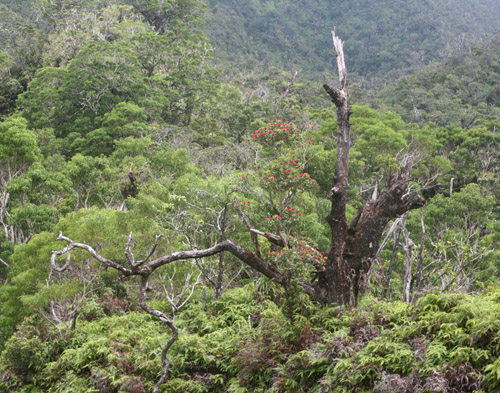 Native ʻōhiʻa forests are effective at protecting mountain slopes from erosion during heavy rains and allow the land to absorb and retain the water.  Mosses, ferns, and other plants that grow on trees and cover the landscape soak-up the rain and slowly release that moisture over the following days, weeks, months, and years.  Additionally, when low lying clouds pass through, water droplets condense and accumulate on the vegetation, drip slowly to the ground, and follow the roots of trees into the soil deep into the earth to recharge the aquifer.  Native forests use less water and capture more moisture from passing clouds, and can increase ground water supplies by 10 – 50%. 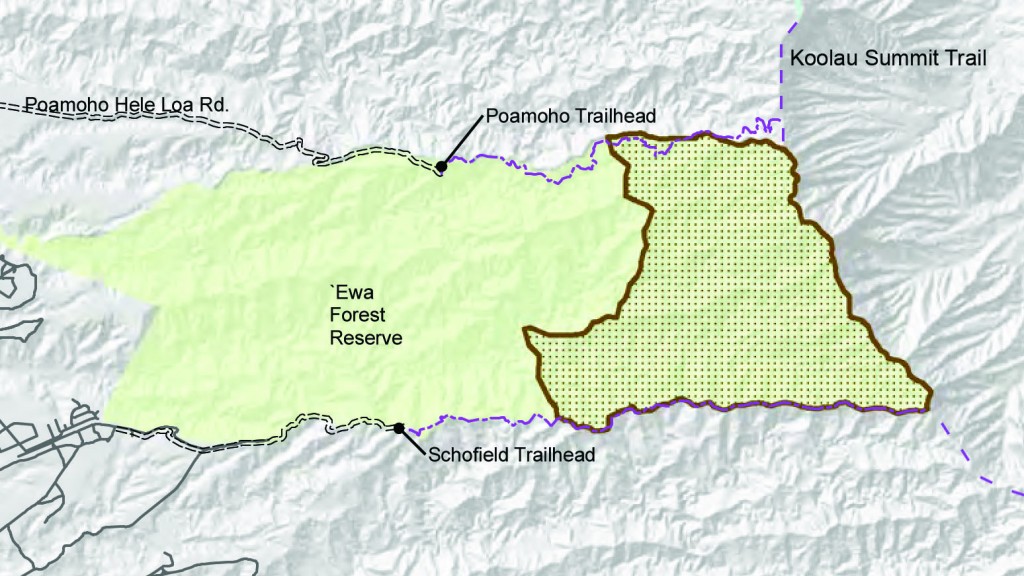 The proposed Poamoho Fence will be built in phases and eventually enclose roughly one third of the upper section of the Ewa Forest Reserve above Wahiawa.  The area is leeward of the crest of the Koʻolau Mountains bounded by 3 public trails — the Poamoho Trail, Schofield-Waikane Trail, and Koʻolau Summit Trail. The fence will protect some of the most intact ʻōhiʻa forests on Oʻahu and is home to 34 rare and endangered native plants and animals. 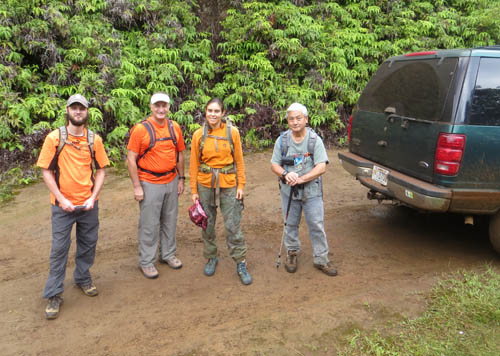 Since the fence will affect three public hiking trails, the State of Hawaii’s Division of Forestry and Wildlife (DOFAW) asked the Hawaiian Trail and Mountain Club (HTMC) for feedback on the project.  In addition to myself, several club members were invited by DOFAW to hike the fence line.  From left to right:  Nikolaj Nordkvist (HTMC), Randy Kennedy (DOFAW Natural Area Reserve Administrator), Emma Yuen (DOFAW Natural Area Reserve Planner), and Wilfred Kawano (HTMC). 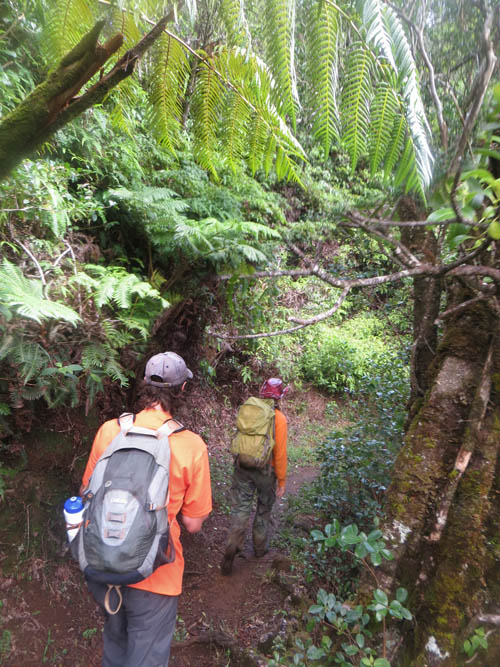 After meeting at Helemano Military Reservation, we drove up the Poamoho Hele Loa Road, and pushed-off on the Poamoho Trail which is dominated by native forests interspersed with patches of strawberry guava — perhaps the worst invasive plant in Hawaiʻi because of its close association with pigs. 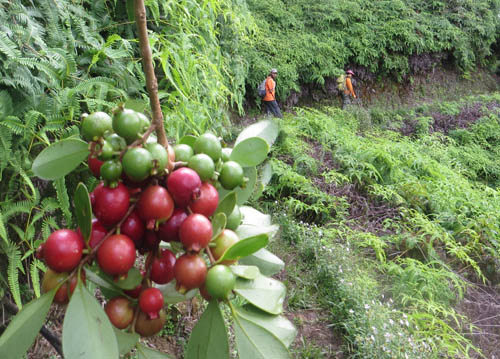 Pigs love to eat strawberry guava fruits and spread seeds whenever they dig, up-root, and roto-til the land.  The plant is bad from a watershed management perspective because strawberry guava uses 27–53% more water than ʻōhiʻa trees.  When strawberry guava forests cover the landscape significantly less rainfall reaches the ground water. 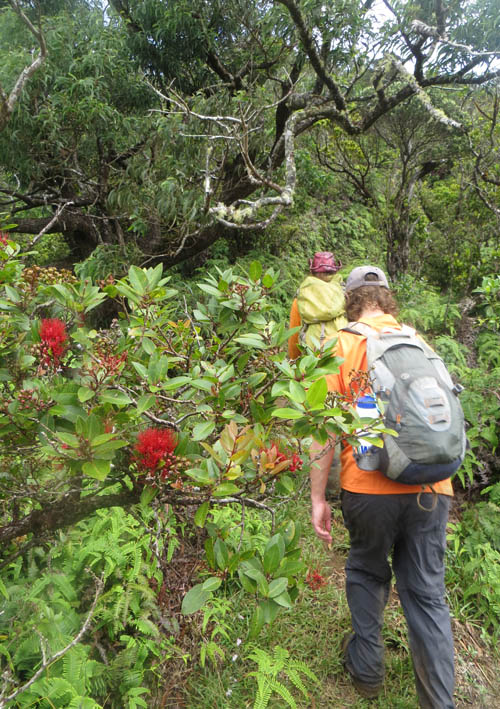 The proposed Poamoho fence will start about half-way up on the Poamoho Trail where native ʻōhiʻa and koa trees thrive. 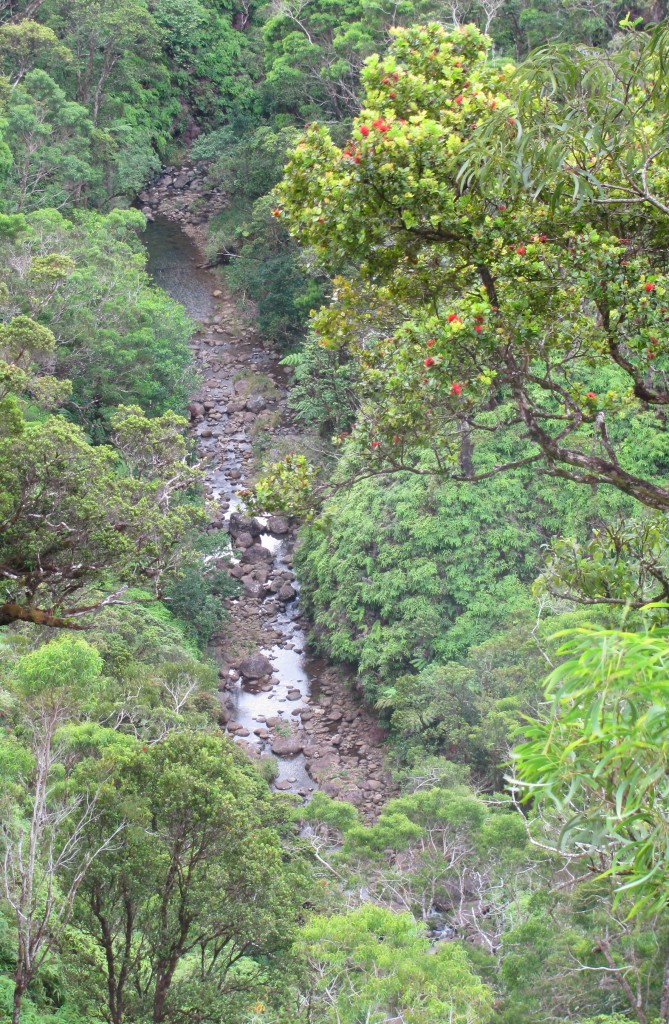 We saw many ʻōhiʻa trees in bloom with red lehua flowers over Poamoho Stream.  The fence will descend to Poamoho stream and climb up the other side to protect the headwaters of the Poamoho watershed which recharges the central Oʻahu aquifer — one of the largest aquifers on the island.  Poamoho Stream eventually flows into Kaukonahua Stream which feeds a network of irrigation systems for agricultural fields on the Northshore. 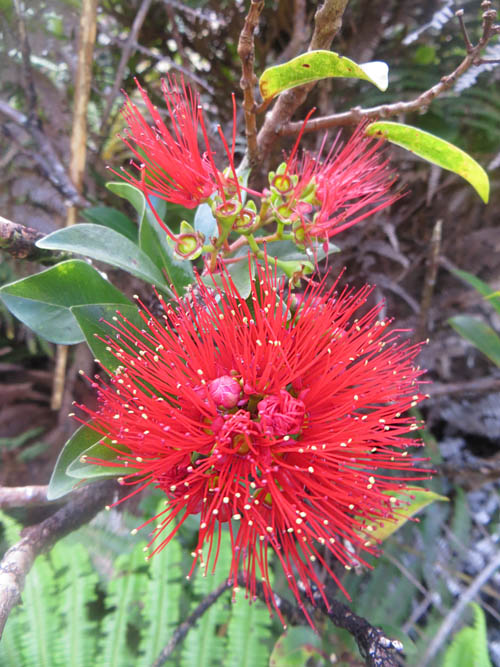 ʻŌhiʻa trees (Metrosideros polymorpha) are the dominant native tree in the Poamoho watershed and are important to the survival of native snails, insects, and birds, some of which are rare or endangered. 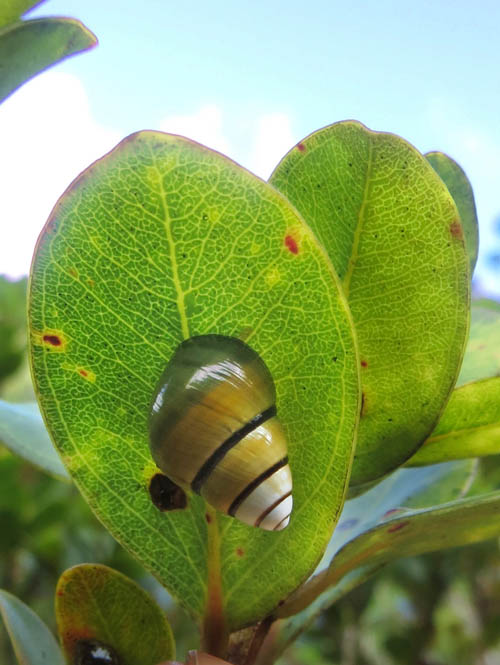 When we searched the ʻōhiʻa foliage we found several beautiful kāhuli or Oʻahu tree snails (Achatinella sowerbyana) between one-half and three-quarters of an inch long sleeping on the underside of leaves. 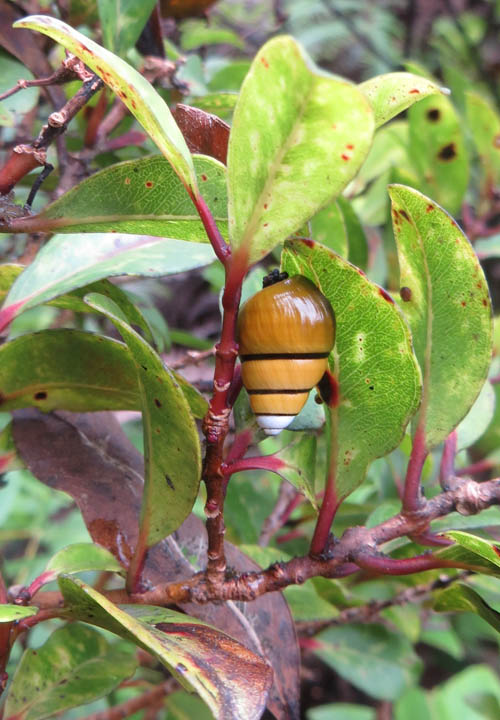 Kāhuli were once plentiful, but are rare today due to a shell collecting craze that nearly wiped them out.  Rats and carnivorous snails have since decimated their numbers even further.  Of the 41 species of Achatinella tree snails, most are extinct today — only a dozen or so species remain and all are on the federal list of endangered species. 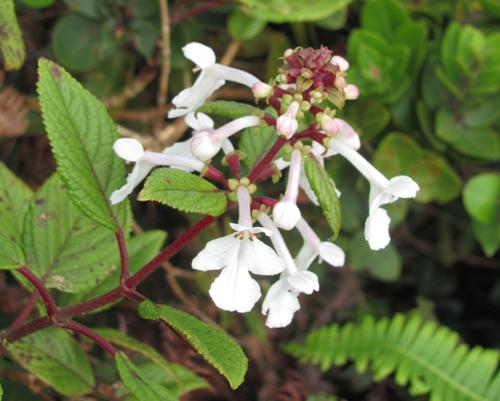 We saw many native mint plants (Phylostegia grandiflora) as we made our way towards the summit — many of which were in bloom with clusters of white flowers.

When we reached the summit of the Poamoho Trail, we relaxed for a bit, ate lunch, and enjoyed panoramic views of the windward Oʻahu and the northern Koʻolau mountains. 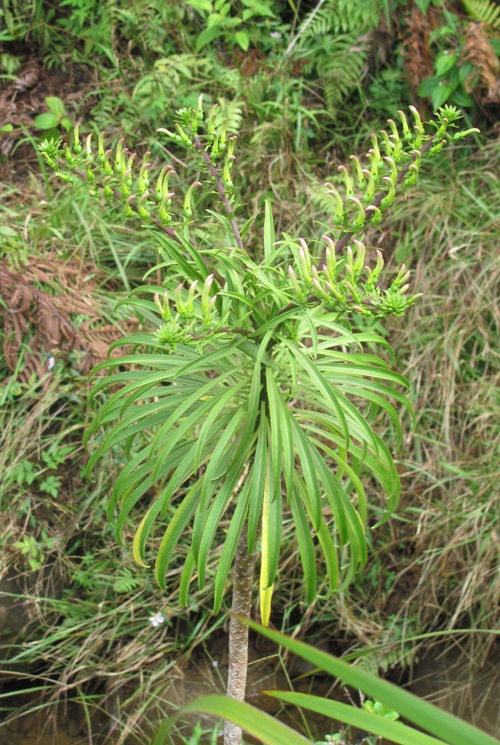 We saw about a dozen koliʻi plants (Trematolobelia macrostachys) at the summit — many of which had spikes of flower buds poised to bloom. 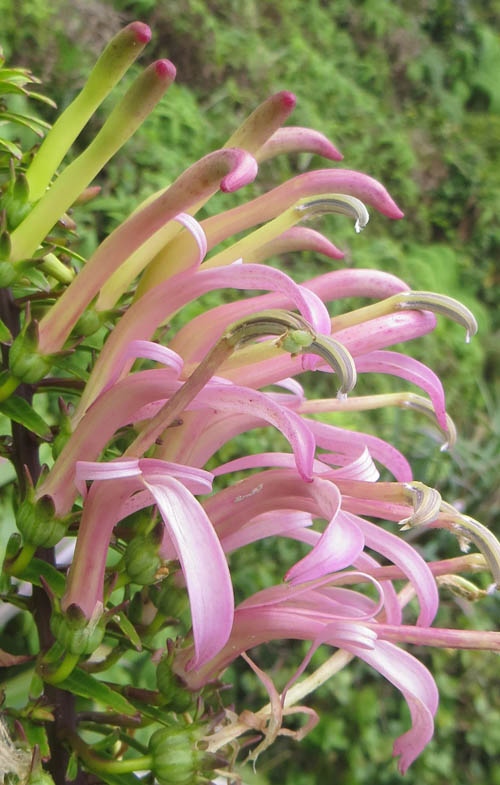 We were thrilled to see one koliʻi whose buds had already opened into distinctively shaped shaped pink flowers. 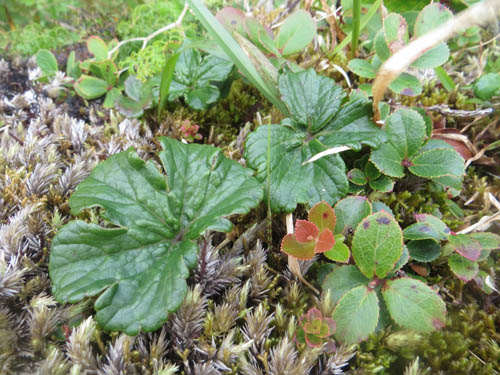 One of the rarest native plants we saw at the summit was Sanicula purpurea, an endangered plant which grows close to the ground.

From the summit of the Poamoho Trail we turned to the south to hike along the Koʻolau Summit Trail (KST). The proposed fence line will follow the KST, descend the Schofield-Waikane Trail, drop down to Poamoho Stream and then climb back up to the Poamoho Trail to enclose 1,500 acres of native watershed.  The fence will generally follow ridgelines but will sometimes cross the trail and/or run along the trail, especially near the summit of the Schofield-Waikane Trail 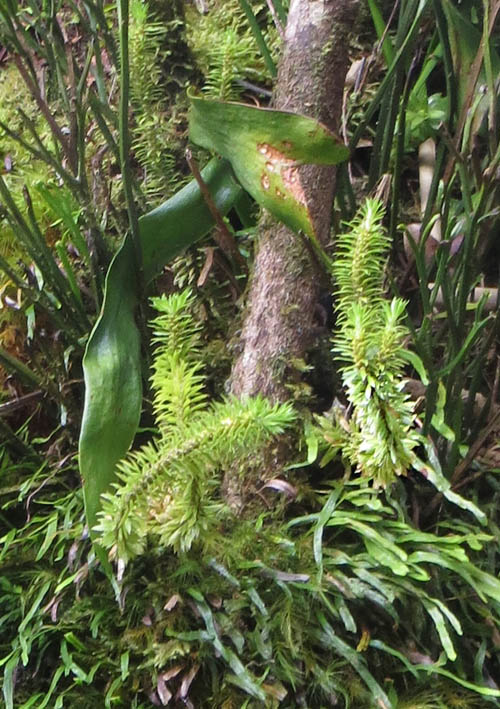 We spent some time looking for rare plants off trail.  We saw Huperzia nutans, a rare club moss endemic to Hawaii, which is on federal list of endangered species. 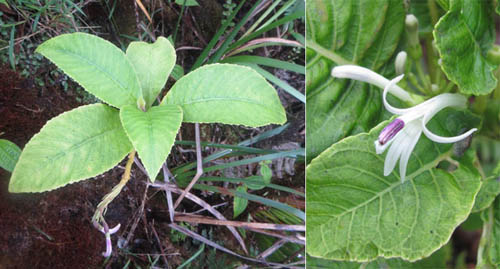 One of our best finds was a rare haha (Cyanea accuminata) which is also endemic to the Hawaiian Islands and an endangered species. 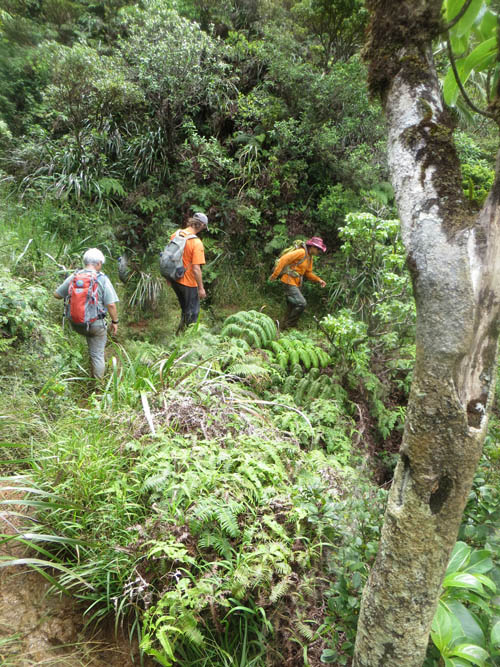 Time passed quickly and soon it was time to leave.  As we hiked back to the Poamoho trail head we expressed HTMC’s position on the fence.  HTMC supports efforts to fence the upper reaches of the Poamoho watershed provided that public access to the 3 trails enclosed by the fence — the Poamoho Trail, Schofield-Waikane Trail, and Koolau Summit Trail — remain unaffected.  In cases where the fence runs along the trail, HTMC wants the fence to be pushed to one side of the trail to leave ample room for hikers carrying heavy backpacks.  In situations where the terrain forces the fence to cross the trail, HTMC wants stiles, ladders, or other accommodations to be made so backpackers can safely cross the fence.  We were pleased when Randy and Emma told us these accommodations were already in their plan. 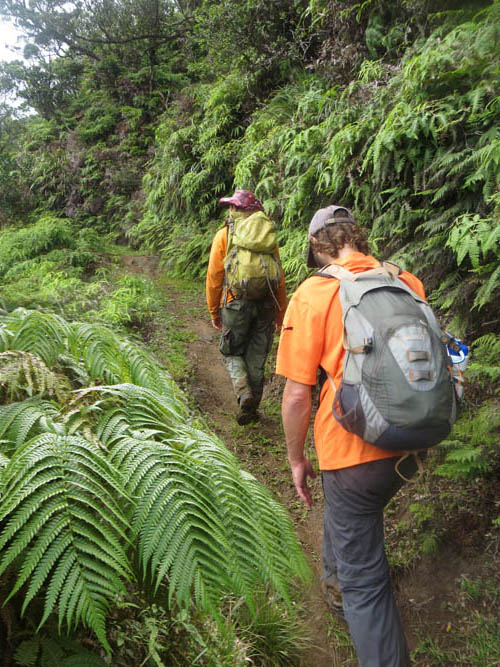 Randy and Emma were so excited about the project that their enthusiasm was infectious.  I could not resist volunteering to remove strawberry guava with them in the coming months.  The Poamoho Fence will provide critical habitat for rare and endangered plants and animals found nowhere else in the world and bolster Oahu’s water supply for future generations.  Truly an important project for a sustainable future.

Grant Application for the Poamoho Fence, Division of Forestry and Wildlife (DOFAW), State of Hawaii