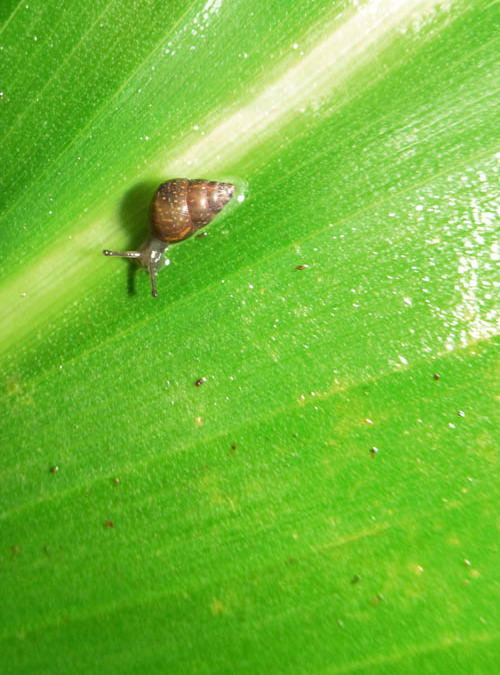 We hiked the Kalawahine and Mānoa Cliffs trails above Tantalus to see the progress being made by the Mānoa Cliffs Native Forest Restoration Project.

It was a cloudy and rainy morning so Justin Ohara and I abandoned our original plans in favor of a short hike above Tantalus.  Not long after pushing-off on the Kalawahine Trail, rain began to fall.  By the time we reached the native snail habitat marked by the sign, much of the landscape was drenched. 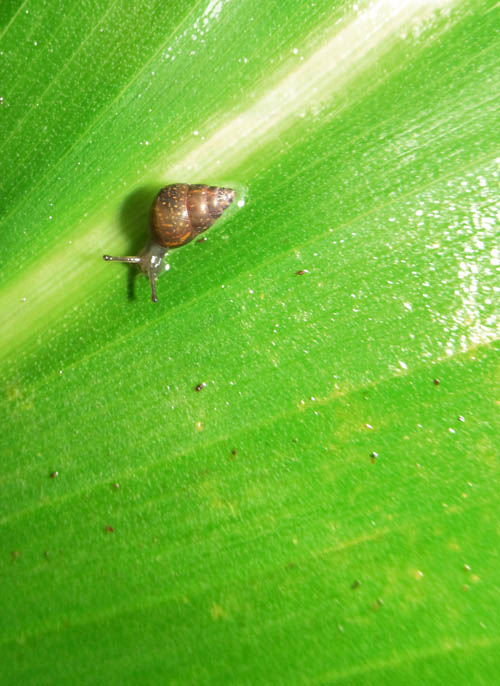 Snails are moisture loving creatures and we were pleased to see many pupu kuahiwi — literally “mountain shell” — crawling on the wet leaves of ginger. Barely larger than a quarter of an inch long, these endemic tree snails — Auricullela diaphana — are not on the list on endangered animals but are by no means common. 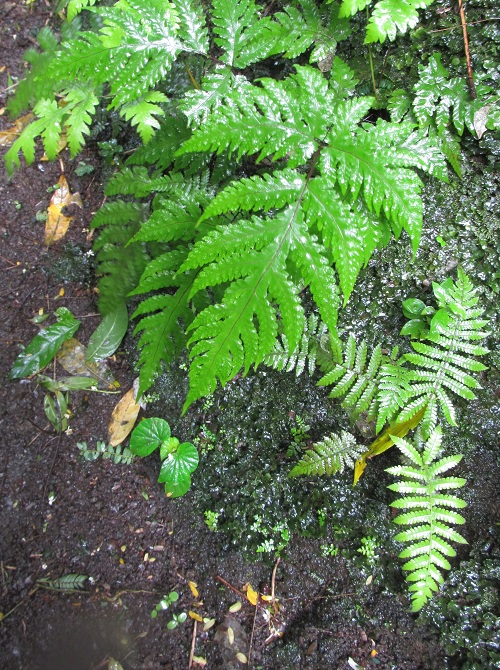 After waiting for the rain to subside under an overhang with ʻiwa ʻiwa lau nui ferns (Tectaria gaudichaudii) and hapuʻu ferns (cibotium chamissoi), we continued on and took the switchbacks that leads to the junction of the Kalawhine, Mānoa Cliffs, and Puʻu ʻŌhiʻa trails. 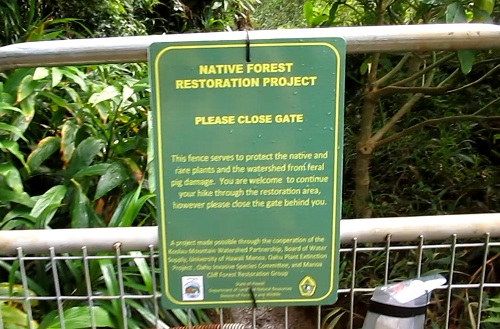 After passing a number of large cinnamon trees, we reached the nearly 4-foot high fence that surrounds the 6-acre restoration site.  The project was started in 2005 as an experiment to see whether the native forest could return if invasive plants were removed.  A fence was constructed around the perimeter of the area in April 2010 to prevent pigs from entering the area who roto-til the soil and up-root native plants. 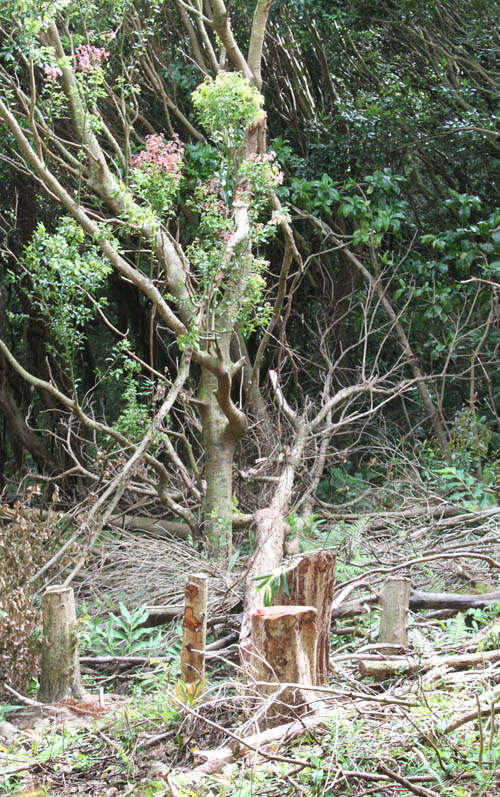 Much of the work involves cutting down invasive plants like these cinnamon trees (Cinnamomum burmannii).  Since 2005, volunteers have put in 2,330 man hours sawing invasive trees and removing non-native shrubs and plants. 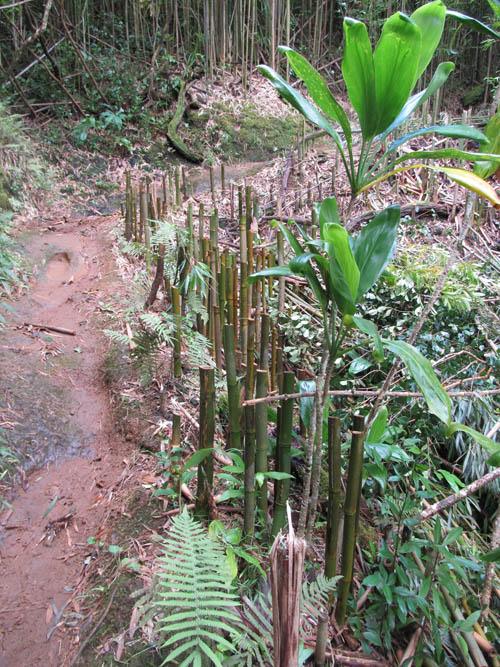 Bamboo (Phylostachys nigra) is especially bad because it forms a virtual monoculture that chokes out native plants.  The State of Hawaiʻi estimates that this species of invasive bamboo from China has spread on Tantalus from 12 acres in 1959 to 46 acres in 2005.  By weeding out alien plants and opening up the canopy, native plants can get the sunlight and space they need to thrive. 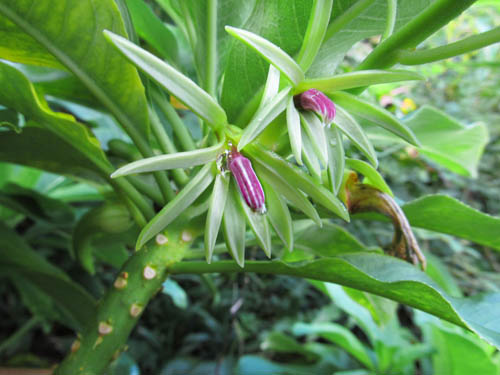 One of the more unusual endemic plants protected by the exclosure is ʻoha wai (Clermontia kakeana ) which has odd green flowers with purple stamenal columns.  I was pleased to see a number of them with flowers and fruits. 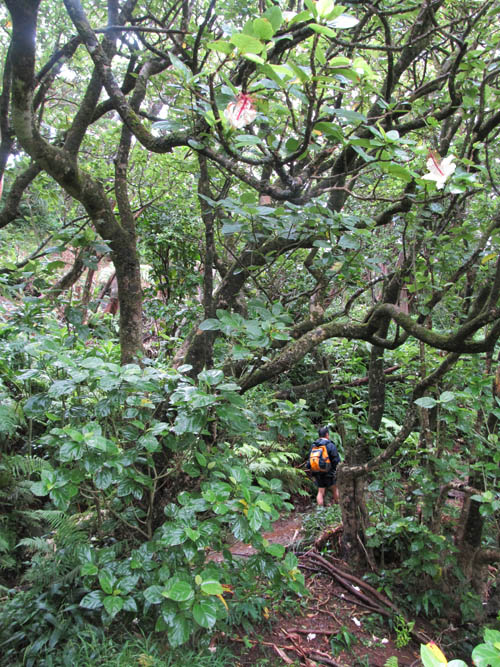 One of the more spectacular examples of native hibiscus trees is contained within the exclosure. A grove of large kokio keʻo keʻo trees (Hibiscus arnottianus) — nearly 25 feet tall — spread their canopies over the landscape. 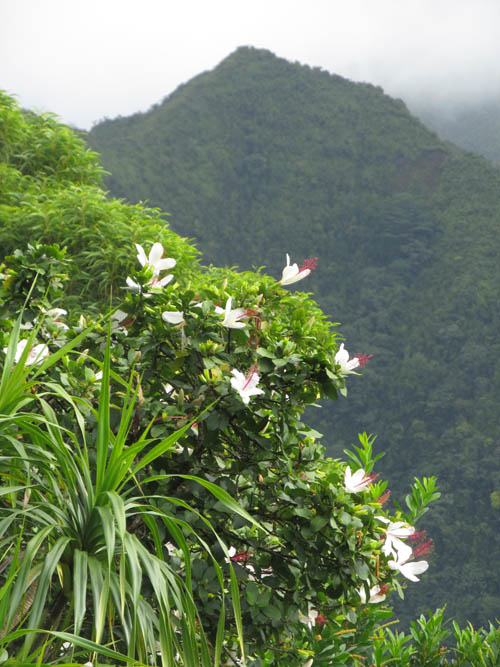 Several of the trees were in bloom with many white flowers which have magenta stamenal columns. 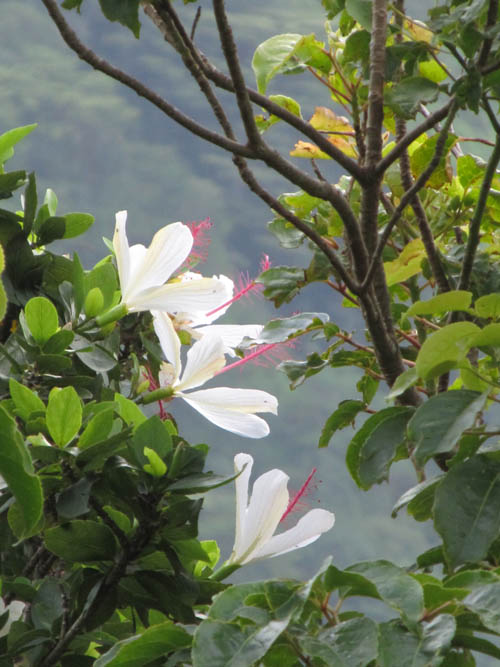 The flowers are about 4 inches across and have a long stamenal column up to 6 inches long with yellow-orange pollen.

One of the more interesting things about kokio keʻo keʻo is that it has a sweet fragrance not present in many commercially available hibiscus hybrids which were selected for their color and multiple petals rather than smell. 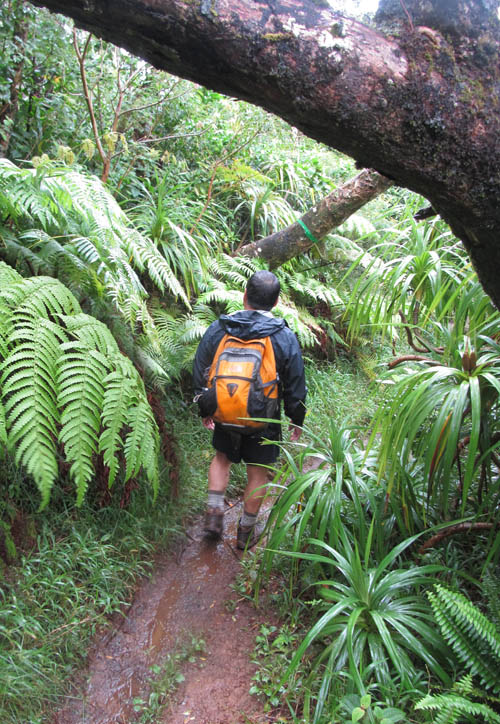 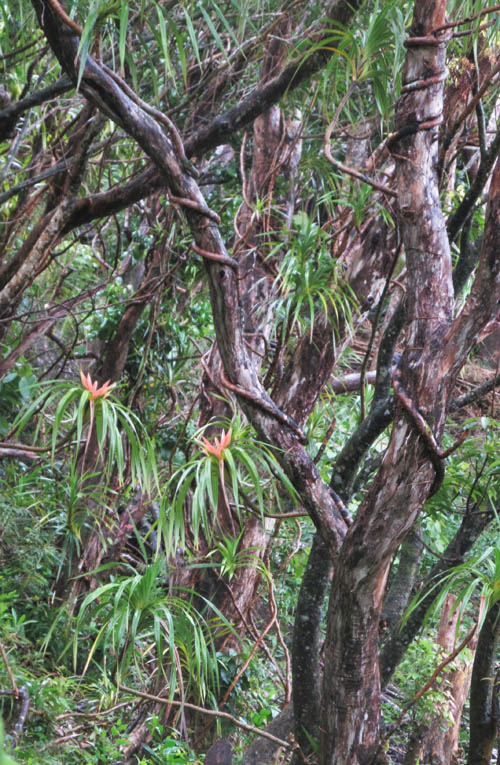 When I looked above the canopy of koa leaves I was thrilled to see the orange flowers of ʻieʻie vines some of which were wrapped so tightly around the trunks of ʻōhiʻa trees that they actually formed indentations as the trunk expanded! 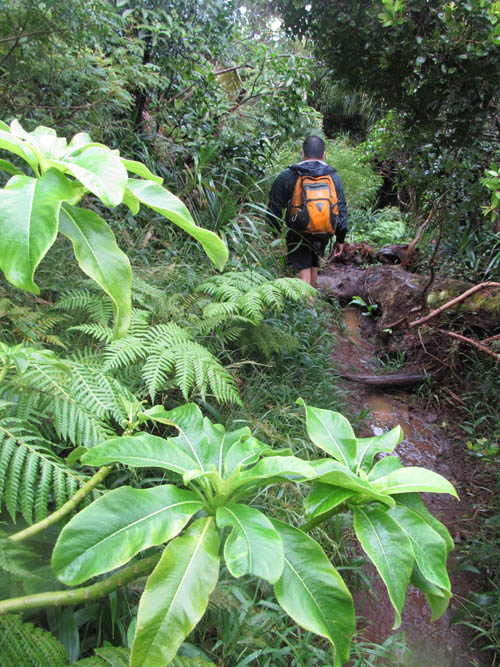 Rain fell multiple times while we were there and the wind howled through the trees.  Since we started to get cold, we decided not to stay any longer and to return the way we had come.  As we hiked back through part of restored native forest, I reflected on what the area looked like before and the impressive strides that have been made.

Although the project is just 6 years old, a native lowland mesic forest has re-emerged on Tantalus due to the tireless efforts of the core team — Mashuri Waite, Brandon Stone, Glen Metzler, and Edoardo Biagioni — and dozens of other volunteers.  If you’d like to join the effort, go to their website — Mānoa Cliff Trail Native Restoration Project — to see how you can make a difference!

Manoa Cliff Trail, Na Ala Hele, Division of Forestry and Wildlife, Department of Land and Natural Resources, State of Hawaii