For the past several months I having been hiking along the rugged Ka Iwi Coast of East Oʻahu to look for red-tailed tropicbirds or koaʻe ʻula during nesting season.

When I saw my first baby chicks in March my curiousity peaked and I decided to return nearly every weekend to see the chicks grow, mature, and fledge.

One of my favorite spots along the rugged coastline is Halona Point whose rocky outcrop shelters a sandy cove.  Multi-hued shades of blue, aqua, and green blend into each other as deep ocean transitions to shallow cove. 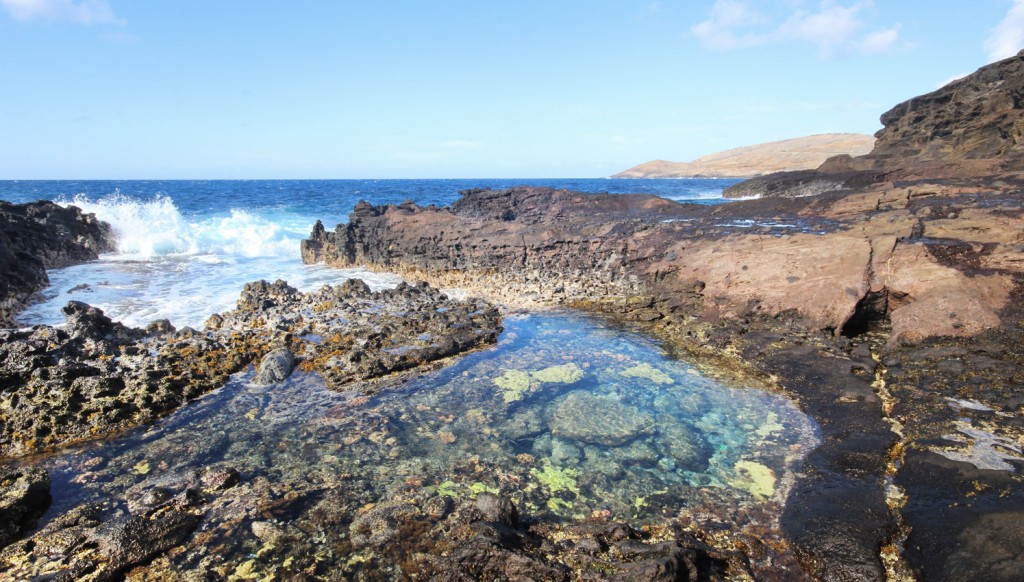 Many small coves and tide pools are carved into the ledge along the rugged coastline.  I can never resist to peer in the water to see the tiny fishes, brilliant coral, and colorful urchins before making my way in and out of the coastline and up and down the rocky escarpment. 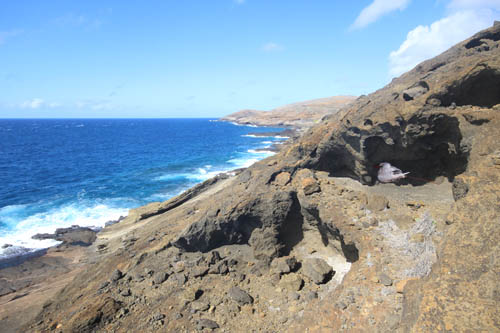 Red-tailed tropicbirds nest in miniature caves and niches carved in the rocky slopes and cliffs.  Although the birds are neat to see on the ground, they are amazing to watch in flight! 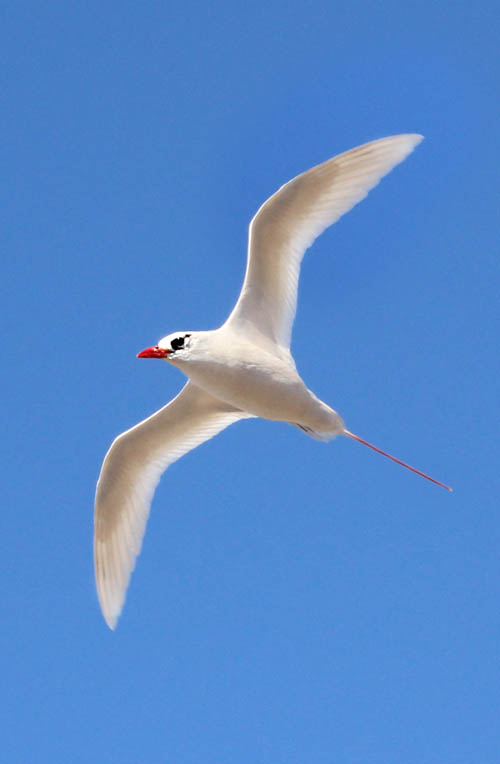 Koaʻe ʻula or red-tailed tropicbirds (Phaethon rubricauda) can grow up to 36-42 inches long (including tail) and have wingspans up to 44 inches across.  Their most distinctive feature are their long red tail feathers and bright red beaks. 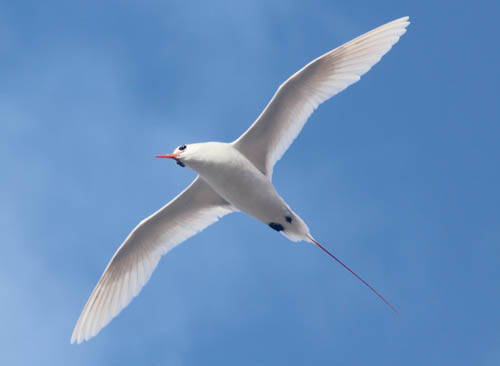 They often soar high overhead in the sky, with their long red tails streaming behind. 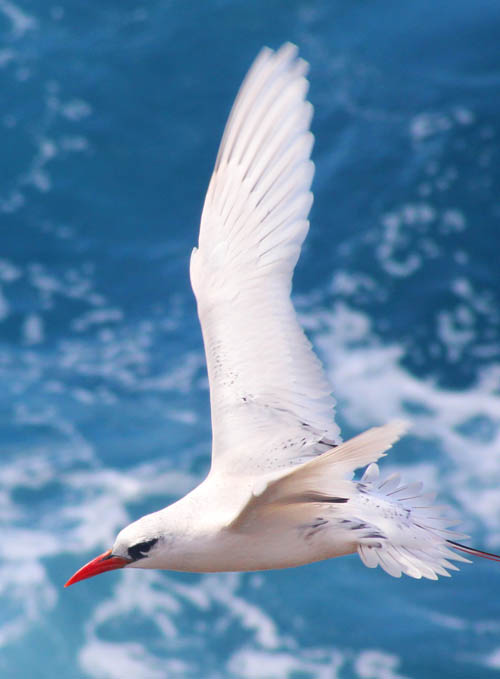 The birds are almost entirely white but have some black accents on their heads and flanks. 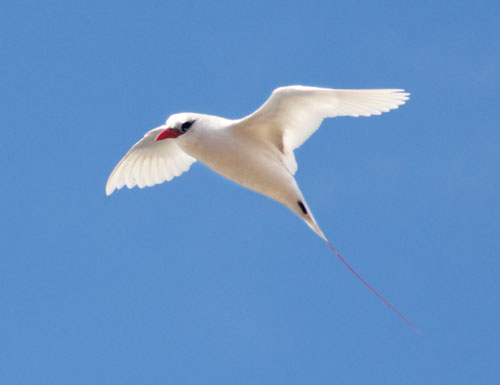 Red-tailed tropicbirds are pelagic seabirds indigenous to the Hawaiian Islands and are found throughout the Pacific and Indian Oceans. 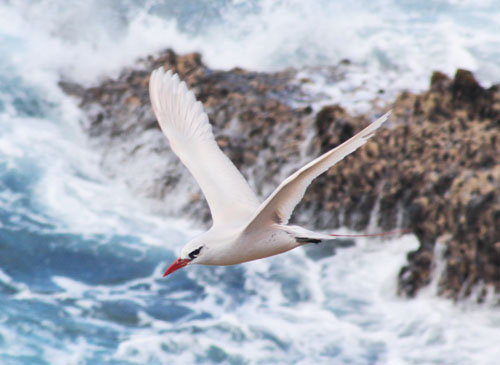 The breeding population in Hawai‘i is estimated between 9,000 and 12,000 pairs, with the largest populations on Midway Atoll and Laysan Island in the Northwest Hawaiian Islands. 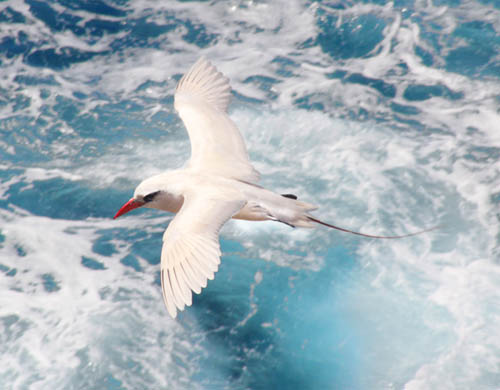 The worldwide population is estimated between 17,000 to 21,000 breeding pairs, with most of them in the Pacific Ocean. 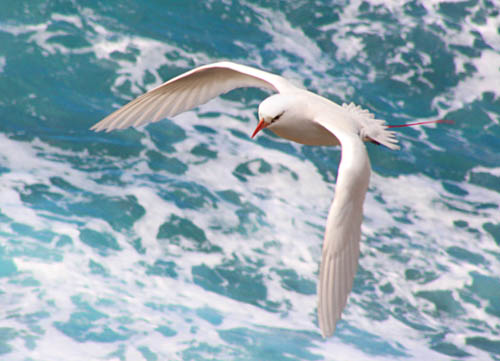 One of the coolest things to see is their acrobatics in the air.  The birds fly in vertical circular loops diving past each other and actually fly backwards!  See the video at the end of this post to see their aerial antics. 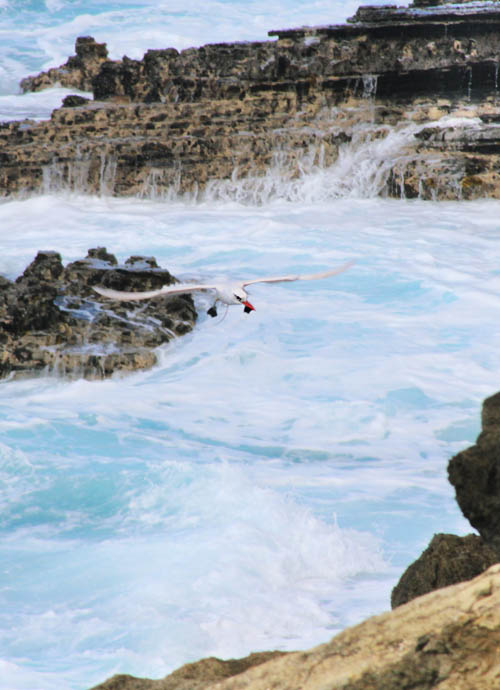 Another cool thing to watch is how the birds land on the rocky cliffs over the ocean. 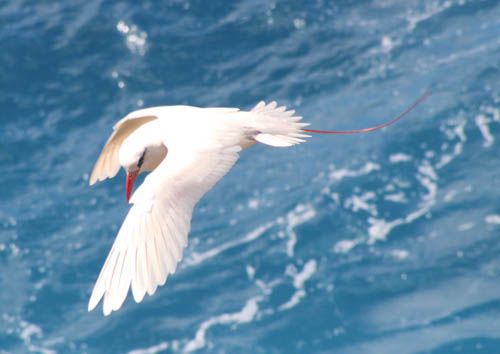 The birds often circle around a few times to orient themselves before landing. 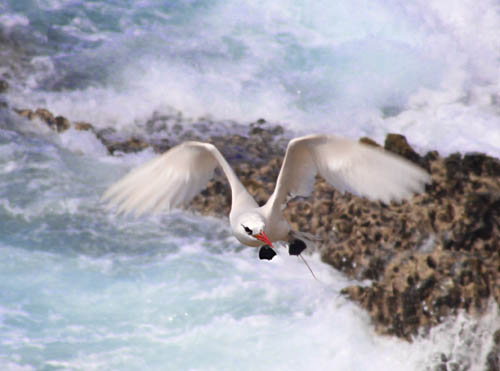 Their webbed feet drop down and their wings rotate in a egg-beater motion to slow their air speed. 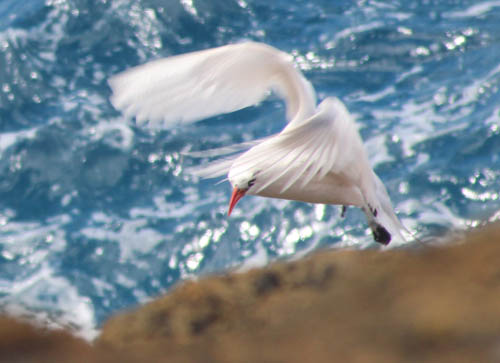 The birds hover momentarily in mid air just before landing on the rocky cliffs.

Some koaʻe ʻula have really long tail feathers that are longer than the bird itself.  The tail feathers were prized in ancient Hawaii and were used to make kāhili — royal feather standards — the symbols of chiefly rank. 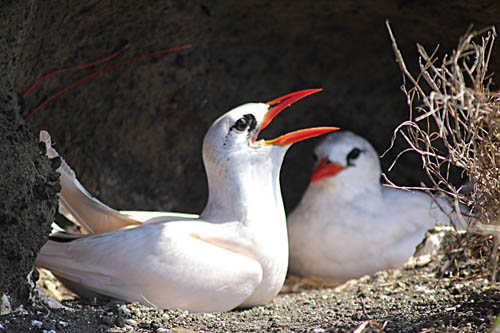 The birds nest in miniature caves and niches carved into the rocky escarpment along the coast.  Both parents take turns incubating the egg and hunting for the chick. 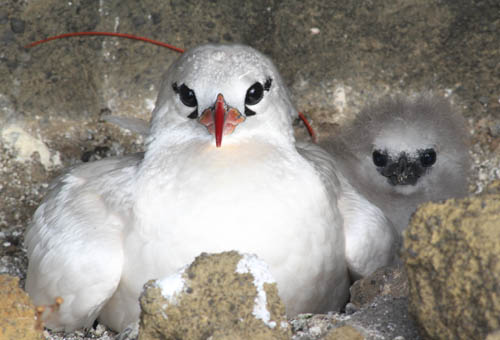 When baby chicks first hatch they are covered with a soft gray down — except for their faces which are naked and black in color. 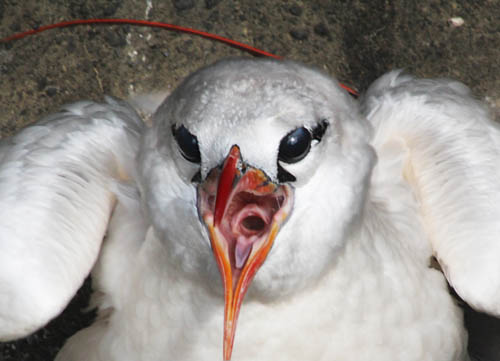 The parents are protective and squawk loudly if they feel threatened or if you to approach too closely. 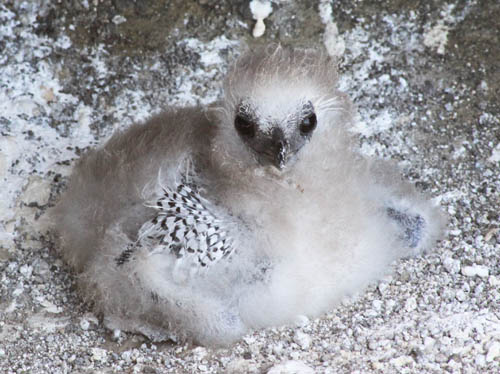 Parents take turns hunting and bring back fish and squid for their little chicks to eat. 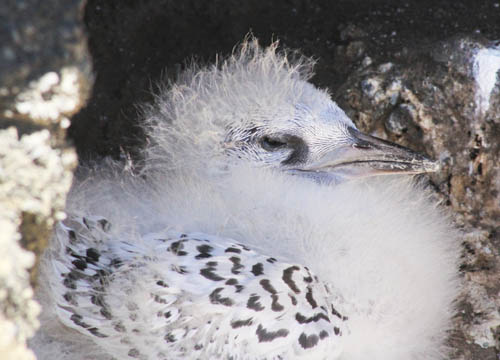 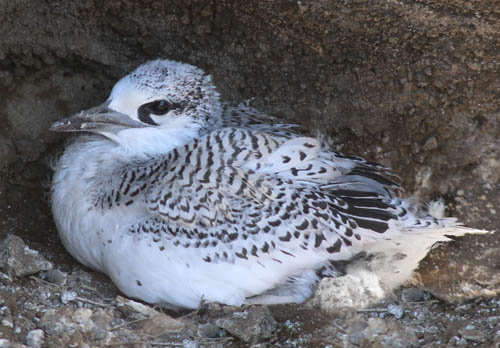 The chicks have voracious appetites and are soon covered with black and white plumage. 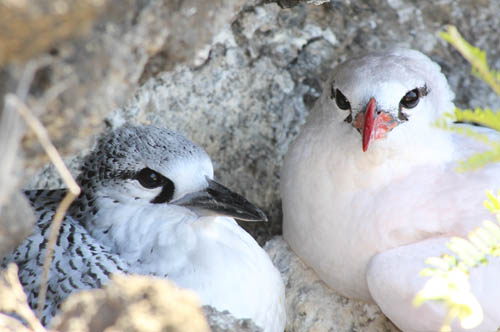 Juveniles grow rapidly and within 4 to 5 weeks become as large as their parents. 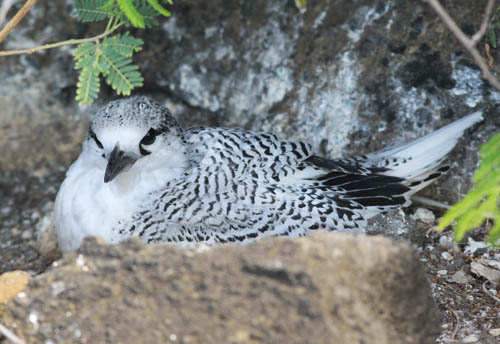 Although I returned week after week to see the chicks in first flight, luck was not with me — I never saw them flying.  This is the largest chick I saw before it fledged and left the nest — never to be seen again.

Red-tailed Tropicbirds are beautiful seabirds with a fascinating life cycle.  I will have to try again next season to see juvenile chicks in first flight.  There is much to look forward to next year!

Red-Tailed Tropicbird, Division of Forestry and Wildlife, Department of Land and Natural Resources, State of Hawaii