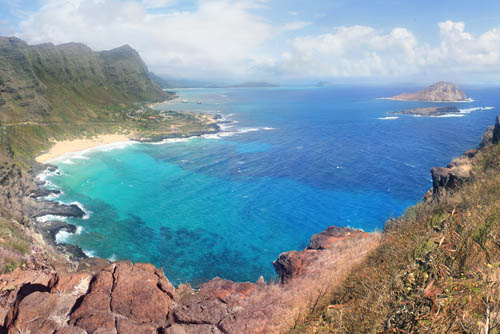 For the past several weeks I have been looking for red-footed booby birds at Makapuʻu along the Koʻolaupoko Coast of windward Oʻahu.

I love to hike to Makapuʻu to see sweeping views of Makapuʻu Bay, Waimanalo, and the offshore islets of Mānana and Kāohikaipu.  It never ceases to amaze me how the shades of blue, aqua and green meld into each other as deep ocean transitions to sandy beach.

Mānana and Kāohikaipu sit less than a mile off the coast and are State Seabird Sanctuaries for thousands of native seabirds — shearwaters, terns, noddies, petrels, boobies, and tropicbirds. 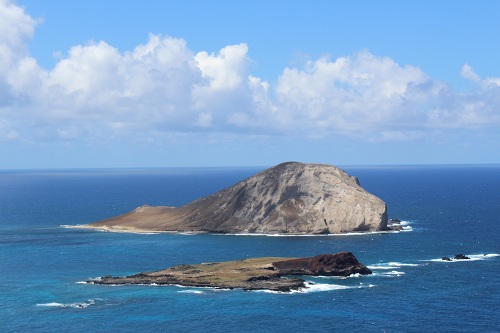 Mānana (Rabbit Island) is the largest islet offshore from Oʻahu and is about 67 acres in size with its highest point at 361 feet in elevation, while its low-lying companion, Kāohikaipu (Turtle Island), is about 11 acres in size and rises to 40 feet above sea level. 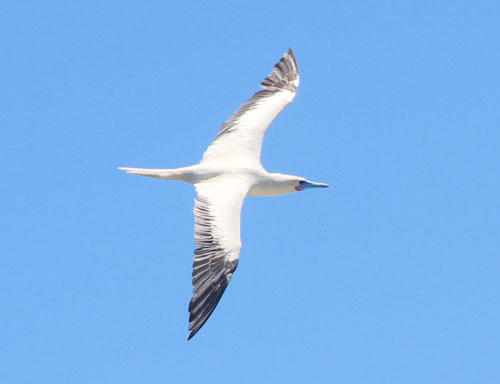 The rocky outcrop at Makapuʻu Head provides a commanding vantage point to see red-footed booby birds or ʻĀ in Hawaiian (Sula sula) flying between the islets and the shoreline in the early hours of the morning. 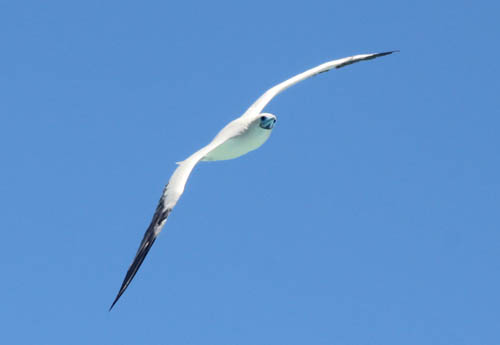 Red-footed boobies have long pointy wings with black tips.  Several plumage variations exist, ranging from all brown to all white and combinations of brown and white, but the subspecies in Hawaii — Sula sula rubripes — is almost entirely white with black wing tips. 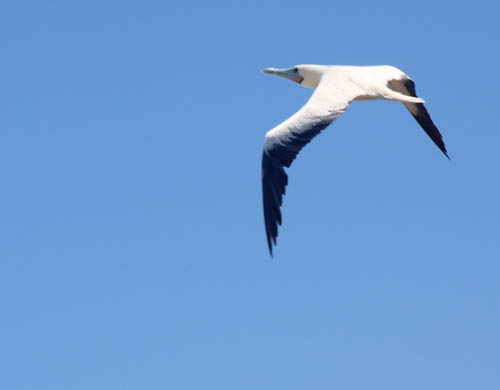 Boobies are strong fliers — they flap their wings to gain air speed and glide for long distances exploiting the air currents.  The birds are indigenous to Hawaiʻi and other tropical islands in the Pacific, Indian, and Atlantic Oceans. 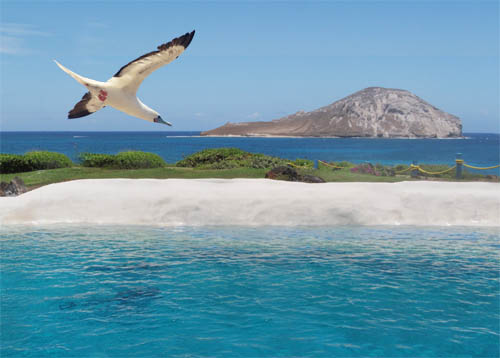 When the birds come ashore at Makapuʻu they often land in the milo, hau, and beach heliotrope trees along the shoreline and within Sea Life Park. 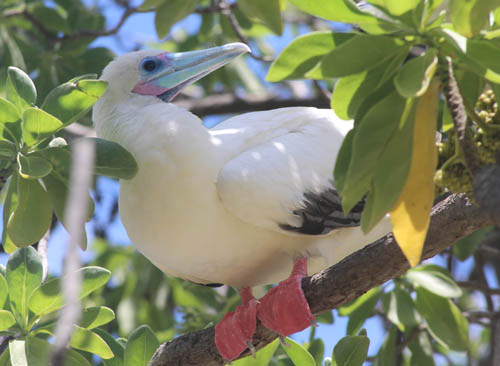 Red-footed booby birds are named for their bright red to orange feet which are webbed and clawed. 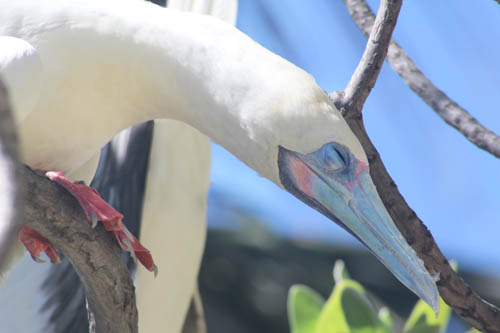 The birds have a pale blue bill with a pink base and facial skin that transitions from pink to blue. 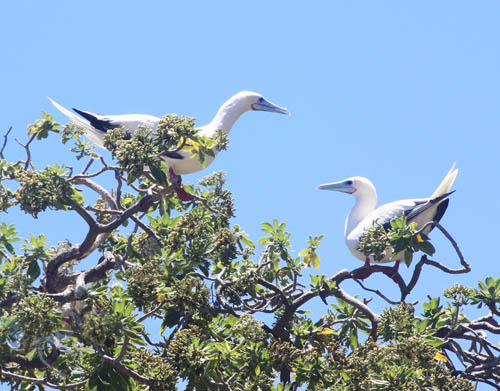 Unlike other boobies who nest on the ground, Red-footed boobies roost and build nests in shrubs or trees. 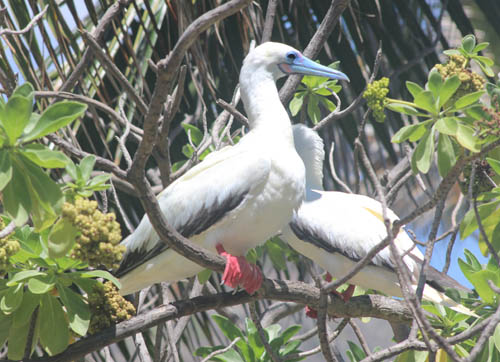 Red-footed boobies breed throughout the Northwest Hawaiian Islands and at a limited number of sites in the main Hawaiian Islands at Kīlauea Point on Kaua‘i, Ulupa‘u Head at Mokapu on O‘ahu, and on several islets off O‘ahu and Kaua‘i. 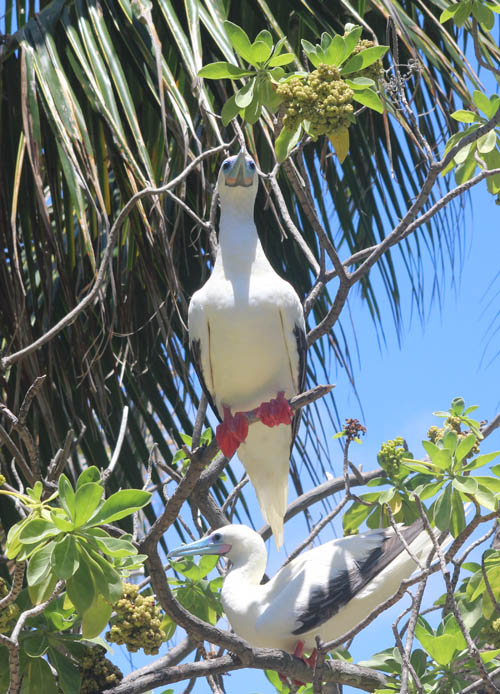 Egg laying peaks in February through April and most offspring fledge by September, but nesting can occur throughout the year. 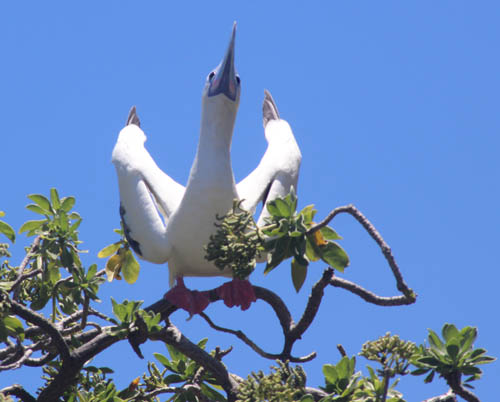 One of the more amusing displays are a courtship ritual where they lift their heads up, turn their wings upwards, and make clicking sounds. 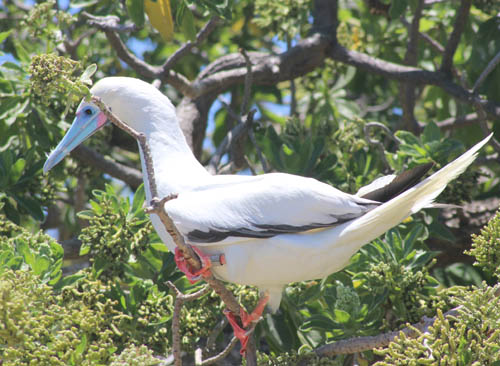 The birds are live fairly long lived and have an average a life span of 20 years. 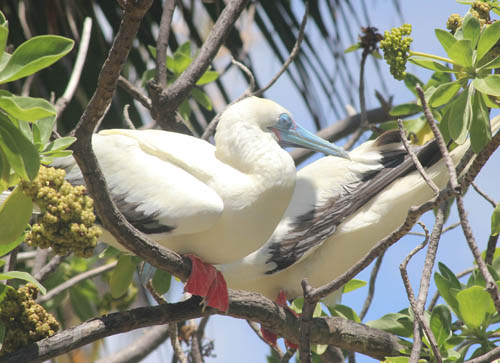 Red-footed boobies retain their mates for several breeding seasons and breed in colonies up to ten thousand pairs strong. 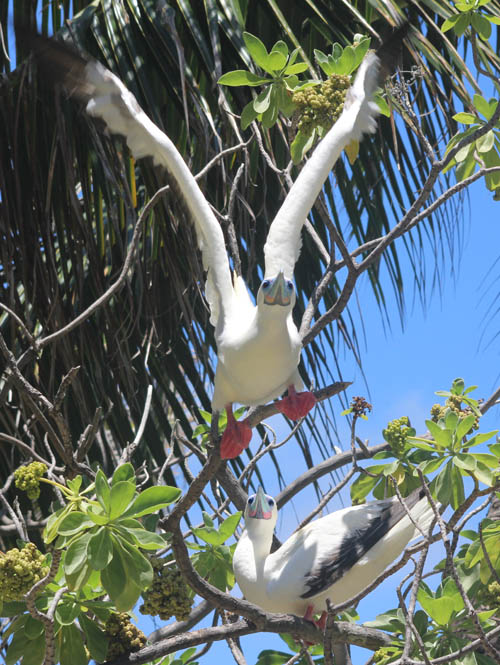 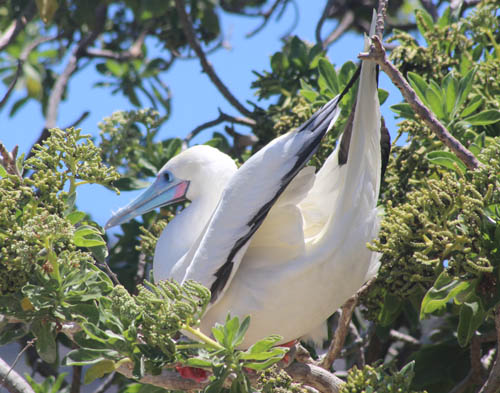 The worldwide population is estimated at less than 300,000 breeding pairs, with the majority in the eastern Pacific. 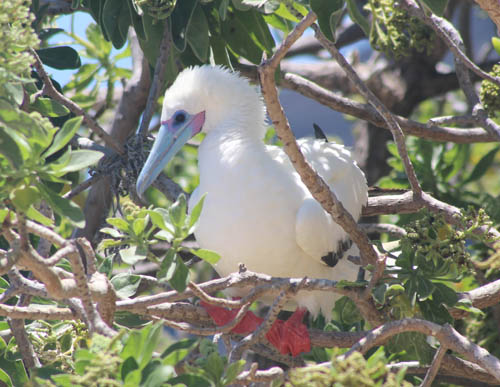 The birds stay closer to land than other Hawaiian seabirds, typically returning to their roosts at night. 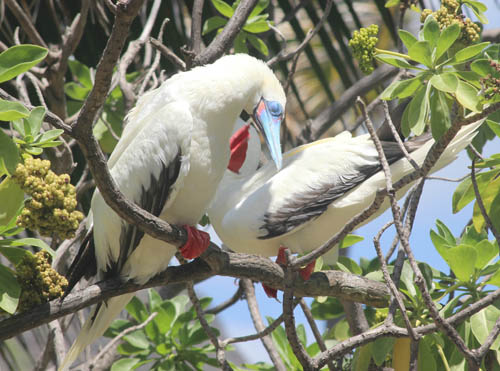 They build nests in trees and shrubs, and incubate their eggs by covering them with their large webbed feet. 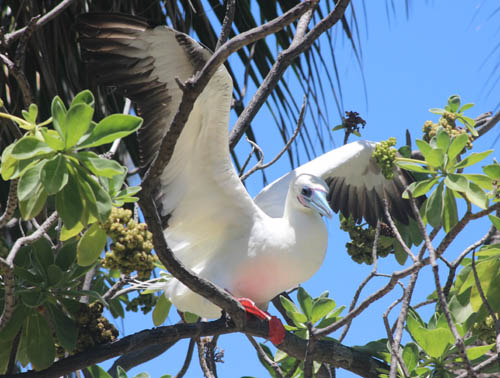 Red-footed boobies hunt for prey by plunge diving 12 – 24 feet into the ocean. 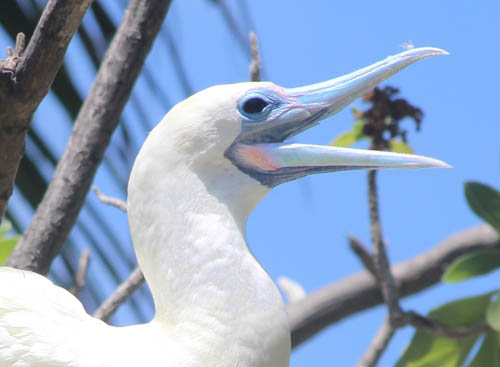 Their diet is mainly flying fish and squid, but they eat mackerel scads, saury, and anchovies.

Red footed boobies are amusing to watch.  I was entertained for hours watching them jostle each other in the trees, scratch and groom themselves, and vocalize as they interact with each other.  Since nesting season is over I will have to return next season to look for booby chicks.  Can’t wait for next year!

The Boobies of Hawai’i, Birding Hawaii