I hiked the trail that leads to the summit of Puu Kalena to see the native plants and animals that make their home along the spine of the Waianae Mountains just south of Mount Kaala.

Puu Kalena (3,504 feet) is the second highest point on Oahu and is one peak over from Mount Kaala (4,025 feet), the highest summit on the island.  While the trail is only a 5 mile round-trip, it gains over 2,000 in elevation and traverses dikes with some of the scariest drop-offs on the island. 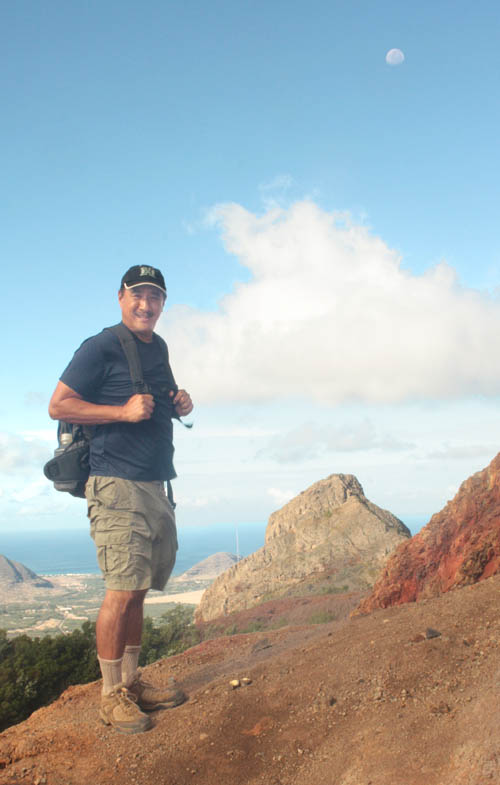 Starting from the road across the parking area, I climbed up the severely eroded slope at the start of the trail.  As I made my way up the slope, clouds blew-in, rained briefly, and then dissipated — a pattern that repeated itself several times that day.  Not only did the clouds provide much welcomed relief from the full brunt of the sun, but the moisture helped keep the otherwise crumbly slope together, making the ascent easier to climb. 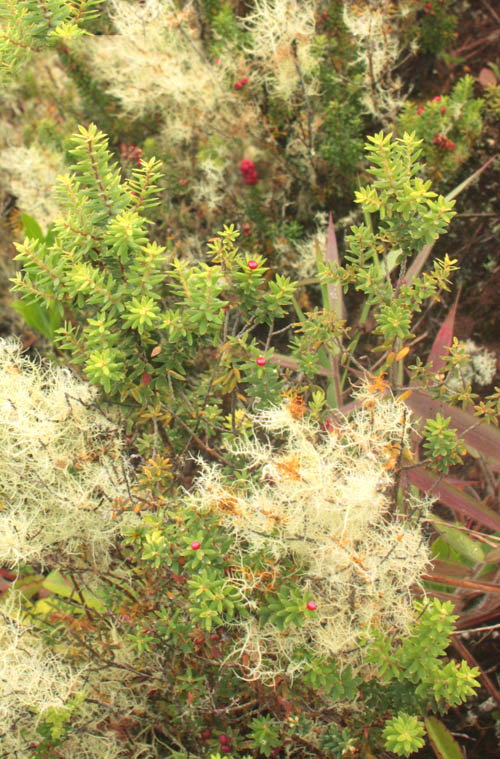 One of the unique things about this trail is that much of the vegetation, like this indigenous pukiawe shrub (Leptecophylla tameiameiae) in the photo above, is just covered in umikoa or beard lichen (Usnea australis).  While umikoa grows at many other locations, it grows especially well at Puu Kalena.  Usnea is worth remembering in emergency situations because it contains antibiotic and antifungal agents that can be used to dress wounds just like sterile gauze.  It is also edible and is high in Vitamin C. 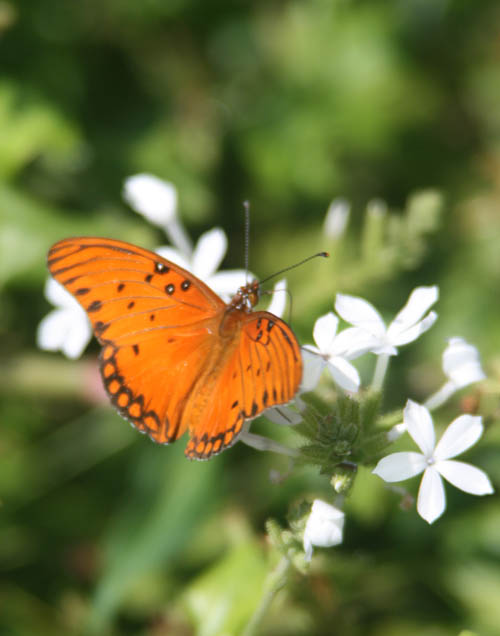 During the initial heart-pounding climb to reach the spine of the Waianae Mountains, I saw a number of butterflies, or “pulelehua” in Hawaiian.  These orange butterflies — the Gulf Fritillary Butterfly (Agraulis vanillae) — are not native to Hawaii, but pollinate a number of native flowers, such as the white ilie’e flowers (Plumbago zeylanica) above. 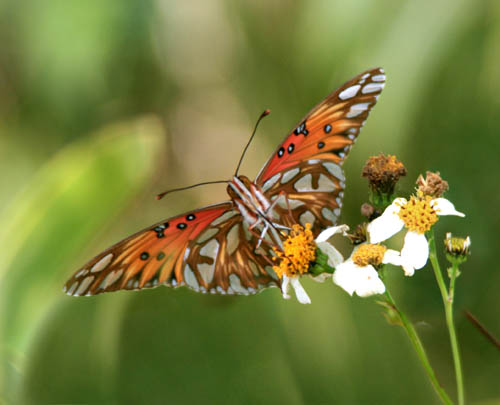 While Gulf Fritillary Butterflies are attractive from above they are even more striking from beneath.  The butterflies have an iridescent white pattern on the underside of their wings which catch the light and flash as they flutter over the landscape. 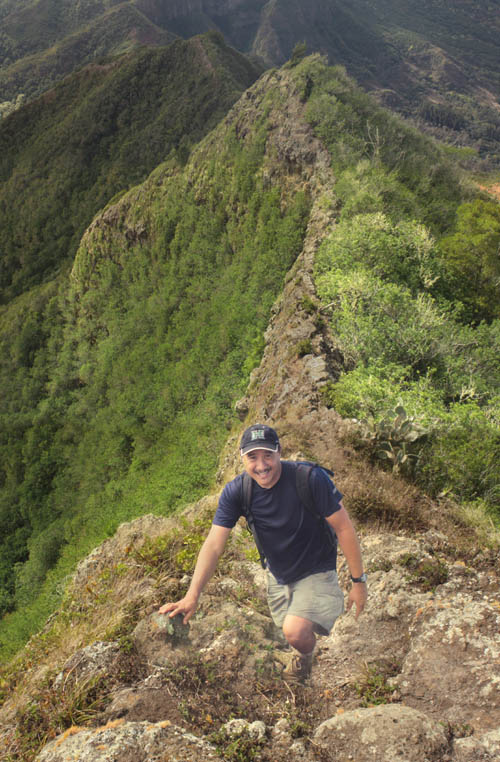 Puu Kalena is known for dike formations over which hikers must climb.  Dikes are formed when magma is extruded through the cracks in previous lava flows.  Since dike rocks are denser they resist the forces of erosion better than the surrounding rock.  Over the passage of time, the softer rock erodes away, leaving the dike rocks exposed as narrow knife-edged ridges.  One of the most dangerous parts narrows to only a foot wide with drop-offs of several hundred feet on either side. 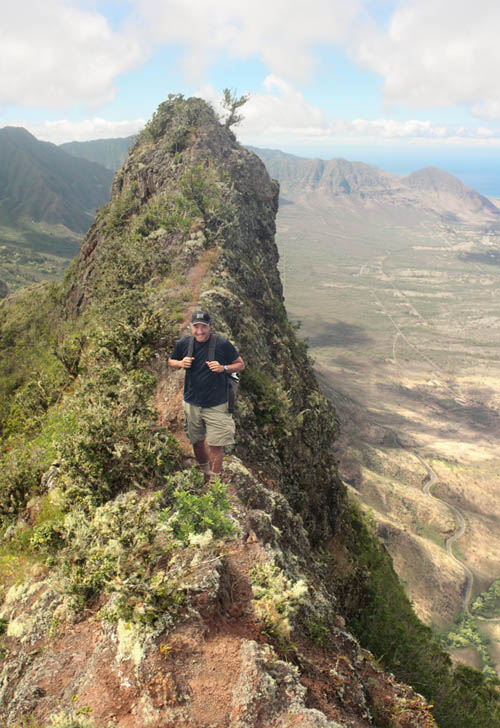 One of my favorite places to explore is a narrow dike a few feet wide that veers off from the main trail with a thousand foot drop-off nearly straight down into Lualualei.  This dike is home to a community of native plants many of which are draped with umikoa. 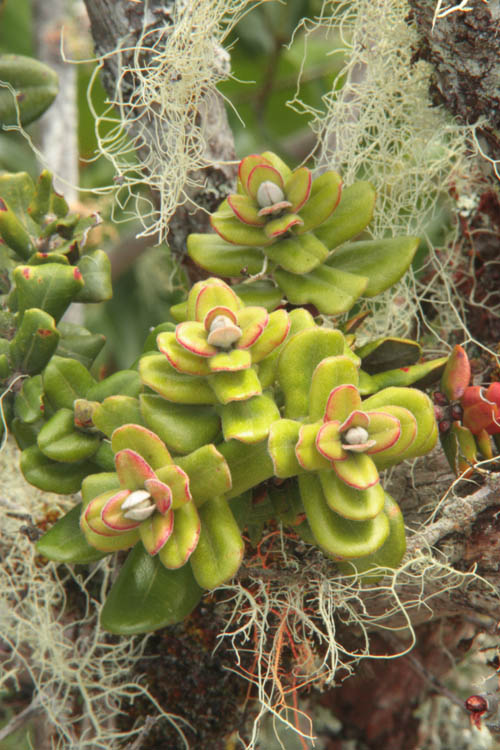 For some unknown reason, Puu Kalena is home to liko lehua with the greatest variety I have ever seen.  The young leaves of ohia lehua (Metrosideros polymorpha), known as liko lehua, can take many forms — smooth, hairy, puffy, maroon, pink, etc.  I was thrilled to see yet another variation — greenish-yellow leaves outlined in red. 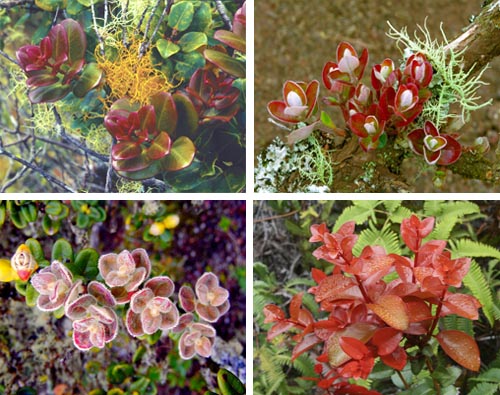 The 4 photos above were taken on previous hikes to Puu Kalena and show the great variety of forms liko lehua can take. The geometric shape of their leaves and the different colors/forms they can take never ceases to amaze me. 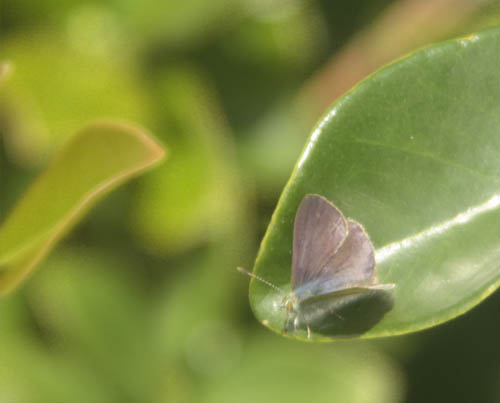 While making my way beyond the dikes, I saw more pulelehua — tiny native Koa Butterflies (Udara blackburnii), with wingspans no more than half-an-inch long, along the trail.  Because of their diminutive size and dull gray color from the top, they are easy to dismiss as nondescript moths flitting over the vegetation.  Only when they land and fold their wings upright do their spectacular blue wings give them away. 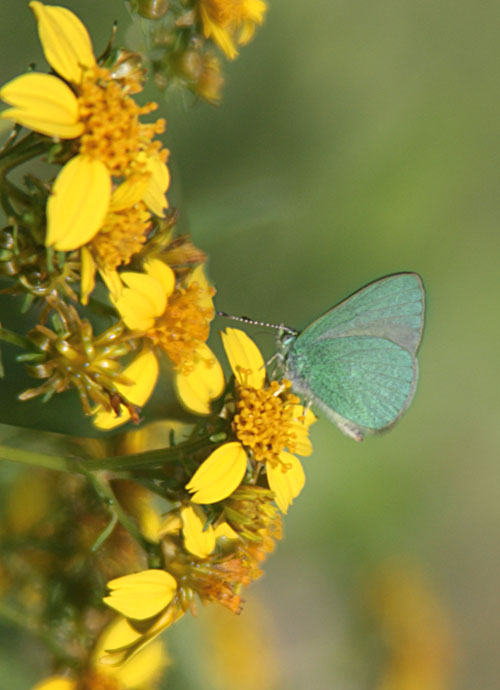 This Koa Butterfly shows off the spectacular turquoise color on the backside of its wings as it sips on the nectar of ko’oko’olau flowers (Bidens spp.).  When their wings are held at just the right angle, they reflect the sunlight with a brilliant iridescent sheen. Also known as the Hawaiian Blue or Blackburn’s Butterfly, Koa Butterflies are one of only two species of pulelehua that are endemic to Hawaii. 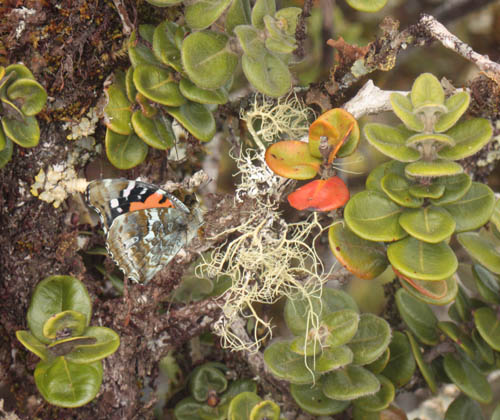 The other endemic pulelehua is the Kamehameha Butterfly (Vanessa Tameamea), which also lives at Puu Kalena.  Unlike Gulf Fritillary and Koa Butterflies whose wings are far more spectacular on the underside, the backside of the Kamehemeha Butterfly is drab — particularly the bottom wing. 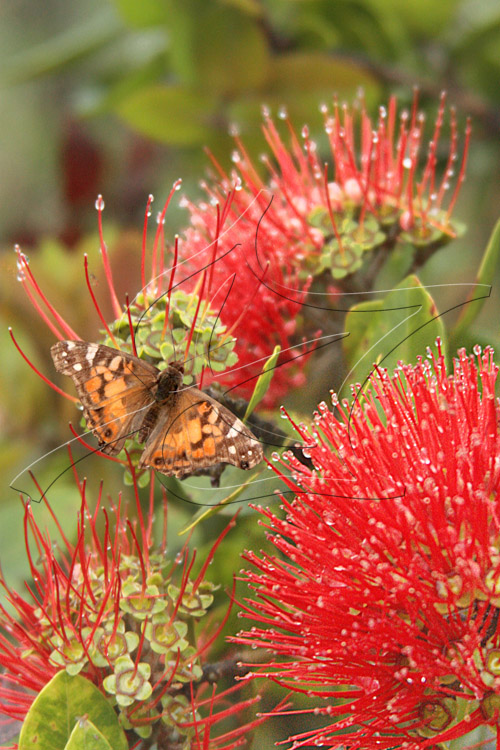 When I saw a Painted Lady (Vanessa cardui) which is closely related to the Kamehameha Butterfly, I was thrilled to see it land on lehua flowers and flap its wings. 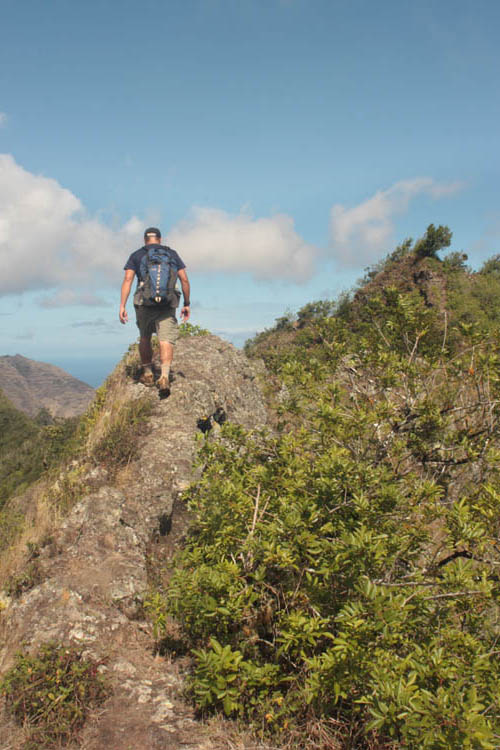 Because I had spent so much time stalking pulelehua on the trail, I did not have enough time to reach the summit of Puu Kalena. As I turned around to descend back down the knife-edged dikes, I reflected on my great fortune at seeing so many pulelehua.  Puu Kalena is an extraordinary place to visit with exhilarating climbs and spectacular things to see!