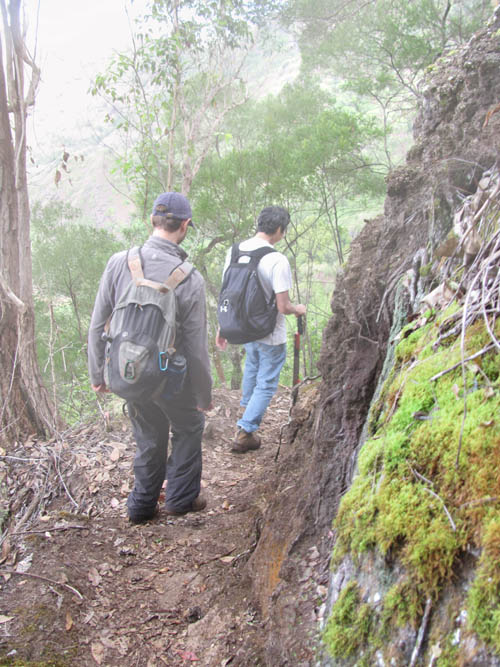 I hiked in the Honouliuli Preserve above Makakilo to look for native plants and animals along the Palehua-Palikea Trail and the spine of the Waianae Moutains.

After driving up to the communication towers at about 2,700 feet elevation, we reached the start of the Palehua-Palikea Trail — the easiest way to access the southern portion of the Honouliuli Preserve.

The mountains were shrouded in a gentle mist as we made our way along the trail.  My hiking buddies for the day were Daniel Chung and Nikolaj Nordkvist. 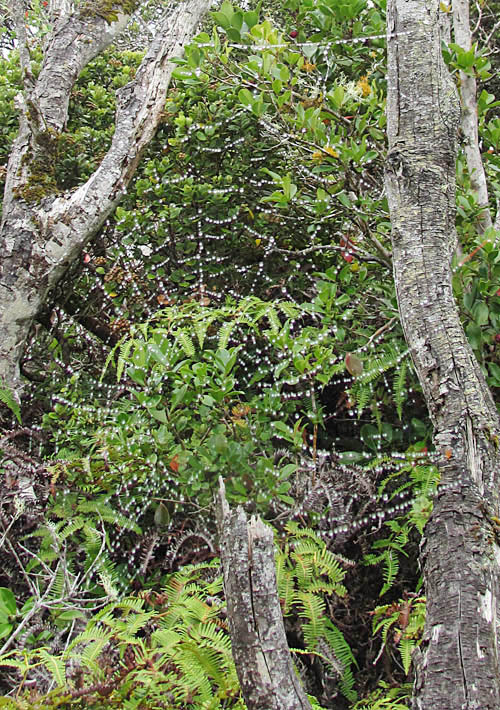 One of the cool things we saw as we hiked down the trail was a spider web on which moisture from passsing clouds had condensed leaving little droplets of water. 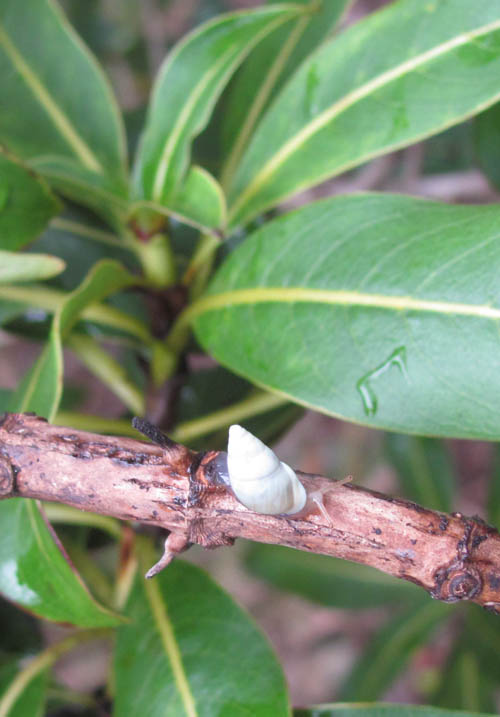 The Honouliuli Preserve is home to a number of native snails.  We saw a small pupu kuahiwi or Auricullela ambusta with an ivory colored shell a little longer and quarter inch long crawling over the woody stems of pilo (Coprosma longifolia). 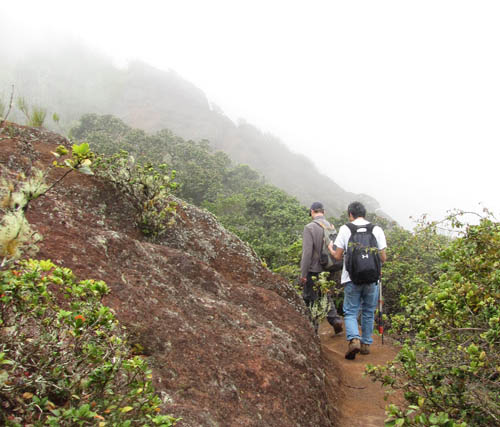 The mists kept the mountain tops cool where ohia lehua (Metrosideros polymorpha) shrubs — many of them no bigger than 4 feet tall — grow along the margins of the trail. 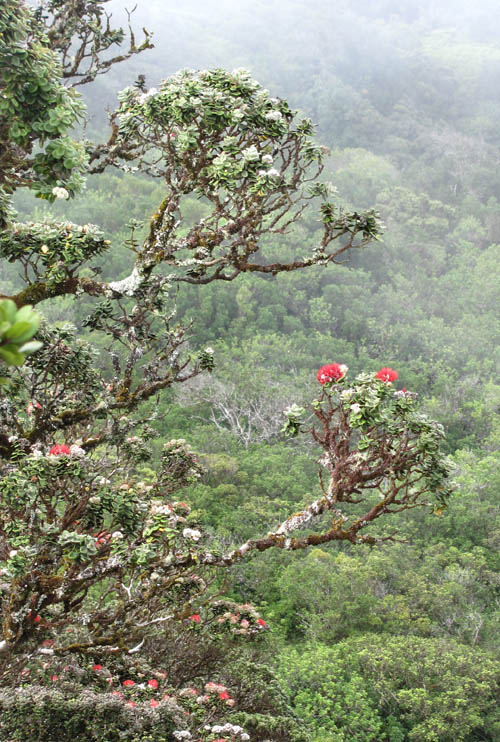 Several of the taller ohia lehua trees were in bloom with red flowers.  One of the interesting things about the branches of ohia is that they are often covered with mosses and lichens. 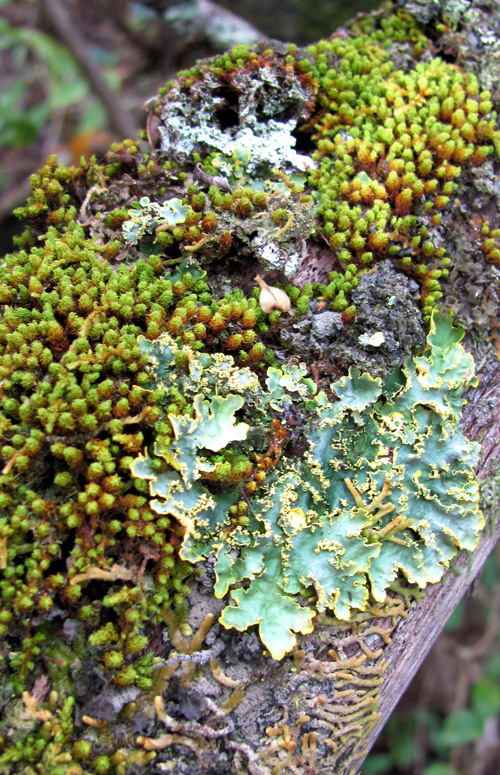 Upon closer inspection, we could see a diverse community of mosses, liverworts, and lichen growing on the surface of the ohia trunk and branches. 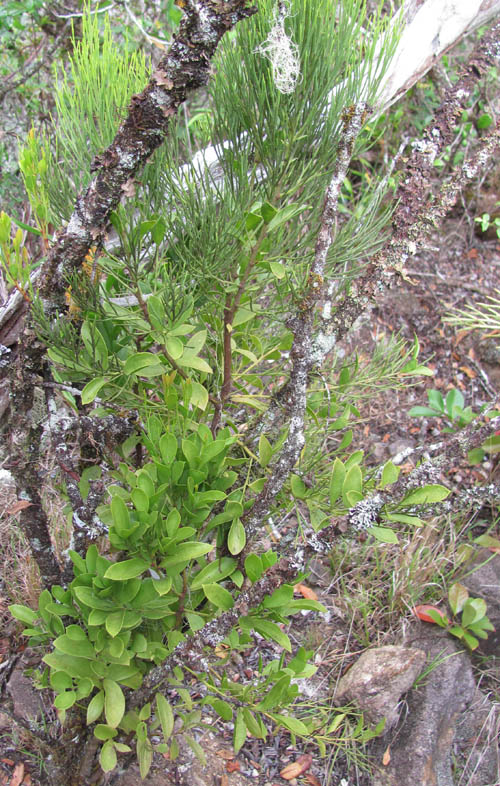 One of the more interesting things we saw was a heau tree (Exocarpus spp.) in the midst of transition from juvenile to adult.  The foliage of heau is distinctive.  As the tree matures, the leaves of the plant fall-off leaving just the stems.  Full grown trees have only leaf stems which contain chlorophyll and fulfill the role of leaves for the plant. 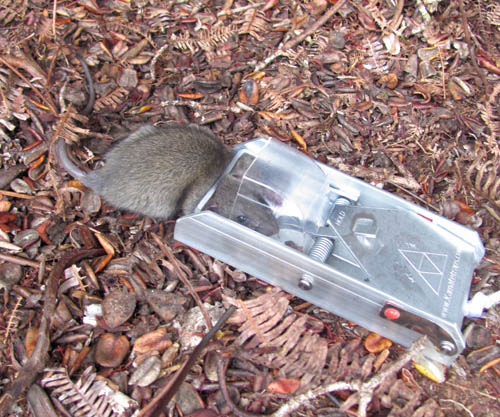 While making our way down the trail, we saw a number of new rat traps that appear to have been recently deployed.  One of the traps had sprung and had killed a rat!  Rats are notorious for preying on native snails, eating native plants and seeds, and are a destructive force in the native forest. 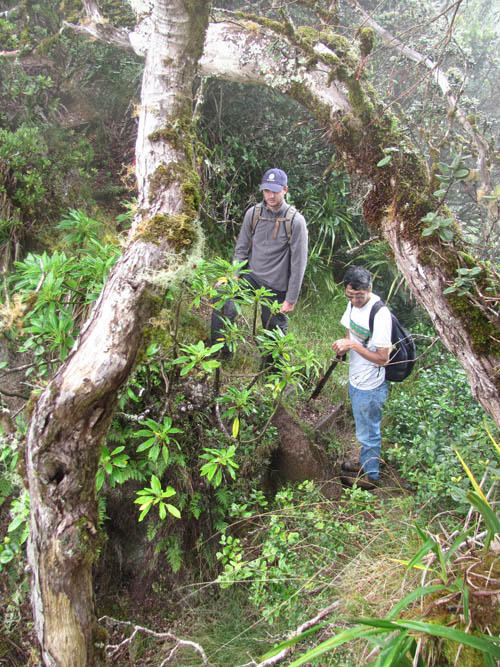 Near the top of the Palikea lookout point we stopped to admire a native clermontia shrub amidst a grove of ohia trees. 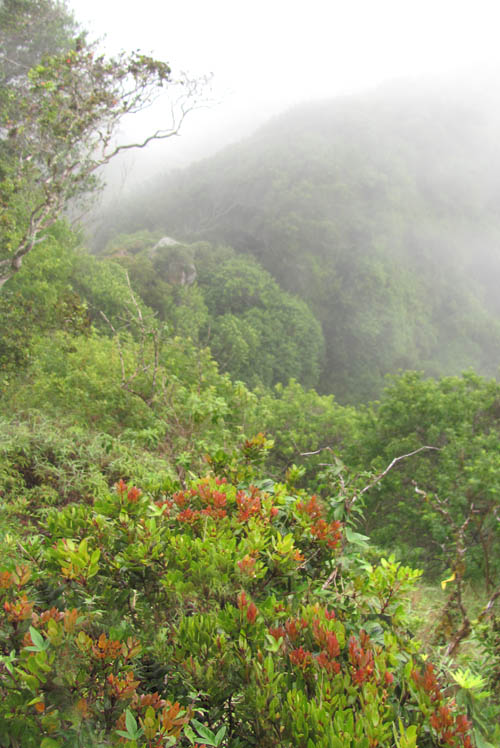 Clouds concealed the view of Nakakuli and the Waianae Coast from the lookout but we could still make out the ridgeline along the mountain top. 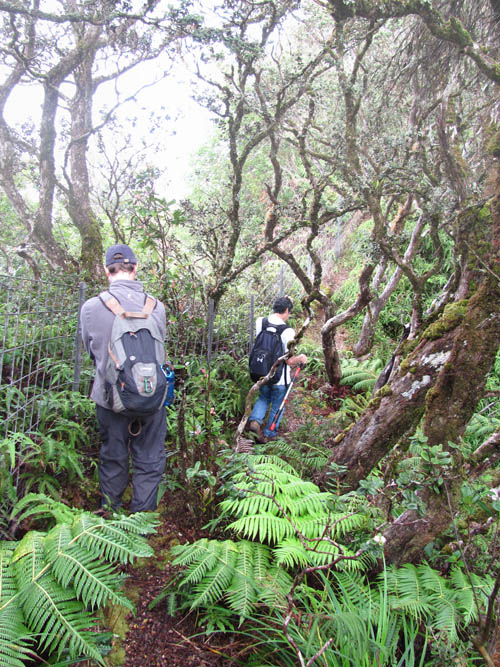 Our explorations coninued along the fence and we made our way through ohia trees with hapuu ferns (cibotium chamissoi) in the understory.  We veered-off the fence line and descended a side-trail to explore a series of side valleys and gullies. 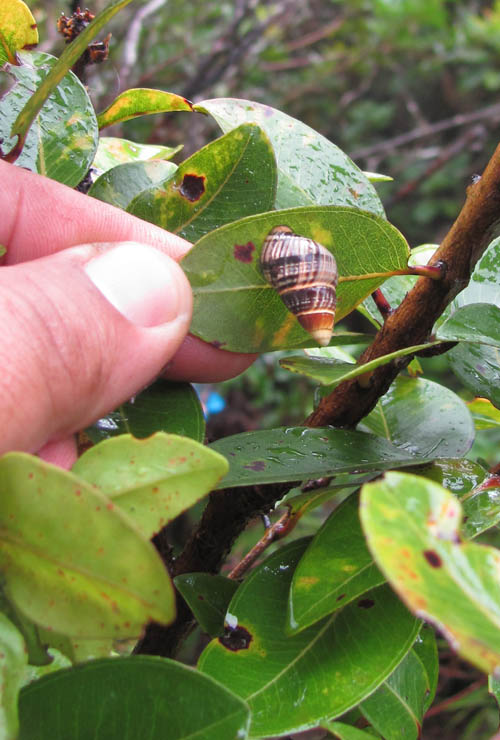 One of the cool things we found was a population of kahuli tree snails (Achatinella mustelina) about three-quarters of an inch long that live in trees.  While kahuli are mostly noctural — they sleep on the underside of leaves during the day — they sometimes are active during the day when rainfall drenches the vegetation. 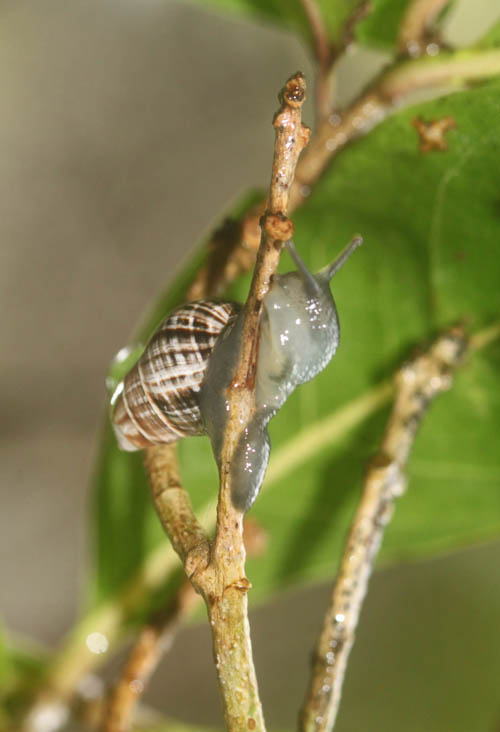 Sure enough — after searching the foliage for quite some time — we found several kahuli crawling about!  Snails are moisture loving creatures and relish the moisture from the mist.  There is considerable variation in the color and pattern on kahuli shells.  The kahuli above has a dark plaid pattern on its shell while the one below has a biege pattern. 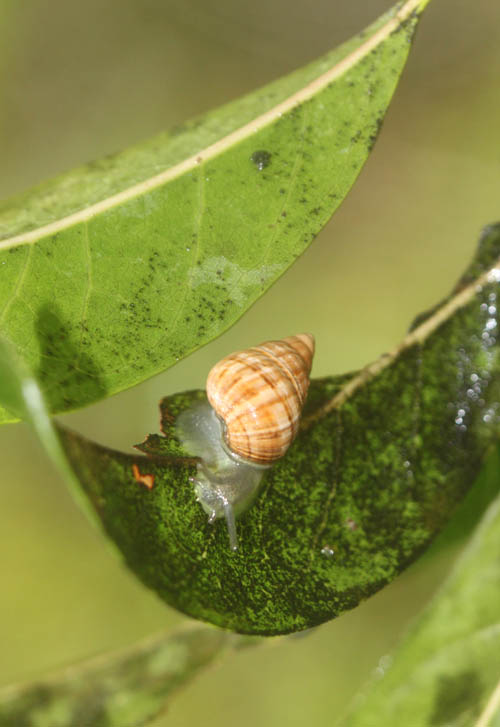 Achatinella snails feed on mold, algae, and fungi that love on the surface of leaves.  The snail above finds a leaf just covered with sooty mold and wastes no time grazing on the bounty.  After admiring the snails for quite some time we pushed onwards to see that else we might come across in the underbrush. 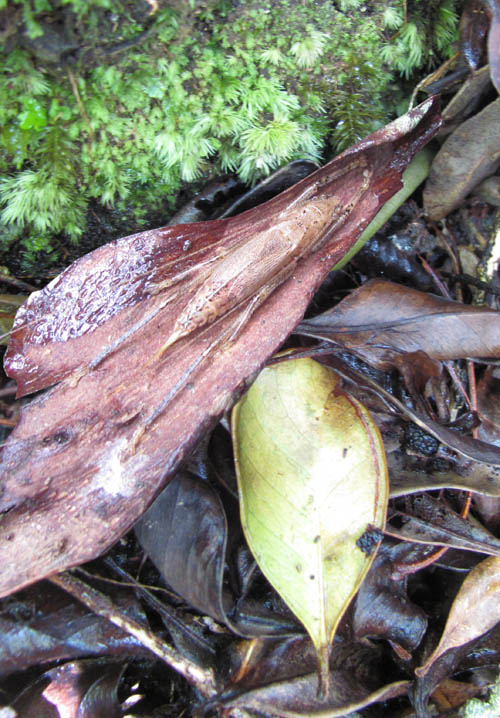 Daniel found a strange looking native grasshopper in the leaf litter — in the order Orthoptera — that had long stretched out legs.  This was the first time I had seen this native grasshopper and I wasted no time photographing the odd-looking creature. 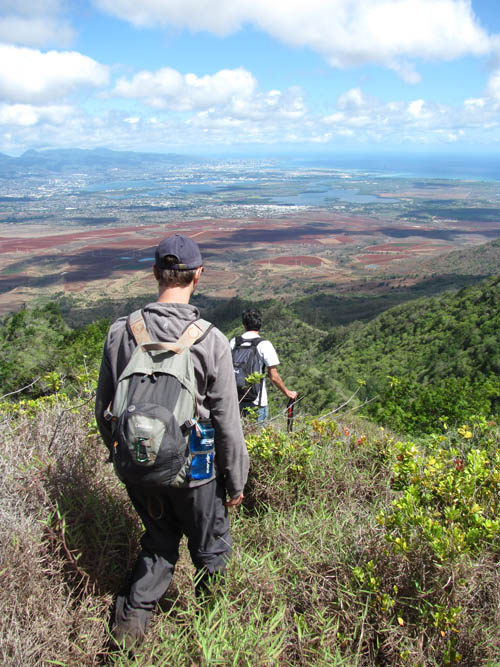 During a break in the clouds which gave us a great view of Puuloa (Pearl Harbor) and the surrounding agricultural fields, we descended a small side-ridge and dropped-down into a small side-valley. 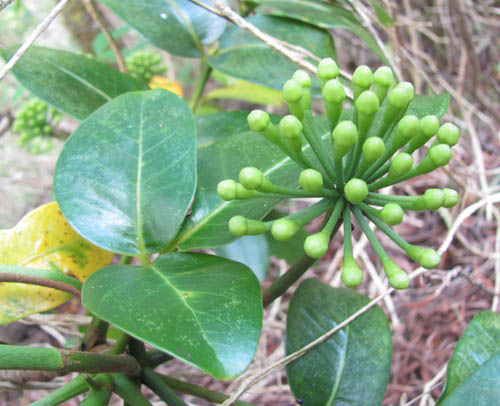 While dropping down we came across several ohe mauka (Tetraplasandra oahuensis) some of them with flower buds poised to burst into bloom. 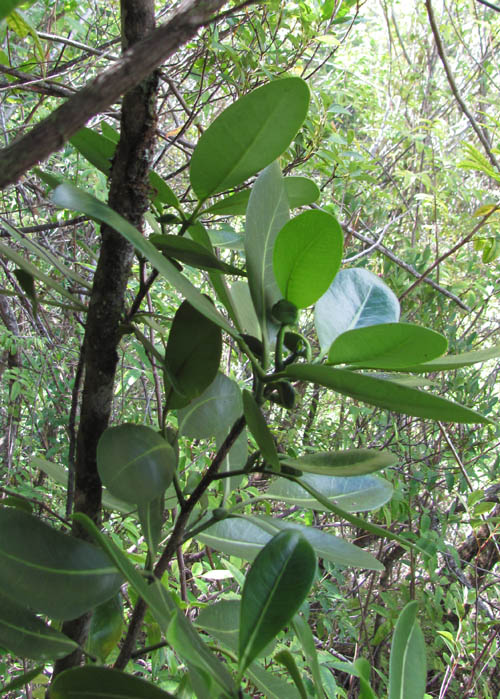 One of the most unusual plants we saw was a’e (Zanthoxylum dipetalum) which has leaflets divided into 3 parts with a most unusual pair  of smaller leaves in the back. 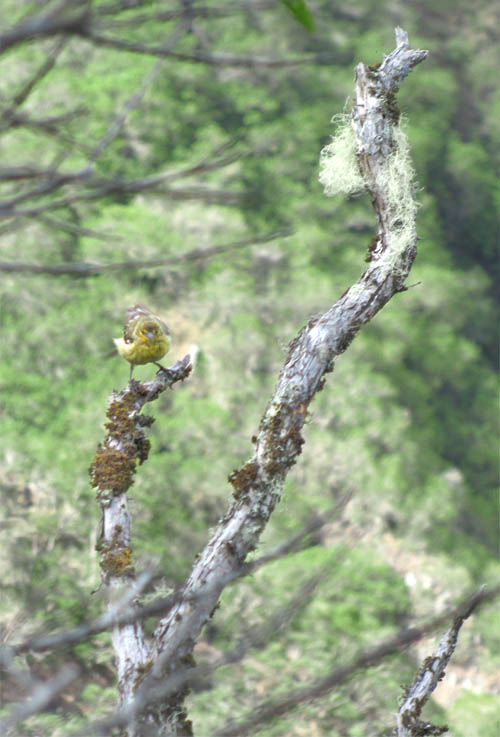 While exploring the small gully for native plants, we heard the calls of native honey creeper birds and were thrilled when an amakihi suddenly appeared!  Amakihi (Hemignathus virens chloris) are the most common of the native forest birds. 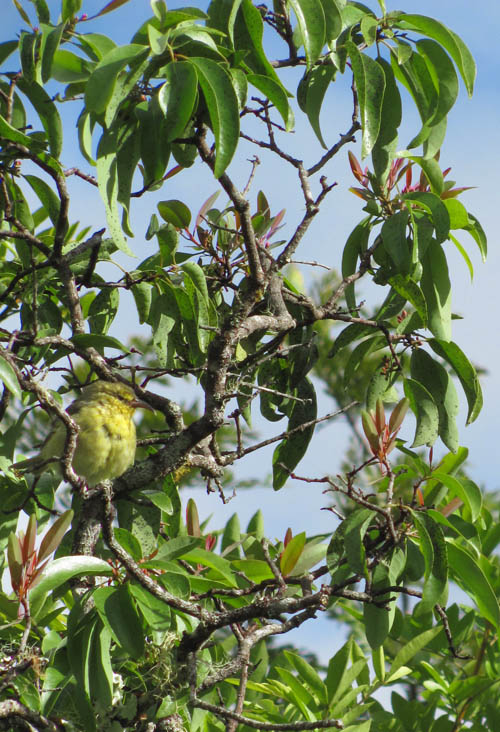 The amakihi came even closer — so close that we could clearly see its curved bill!  Resting on an iliahi or sandalwood tree (Santalum freycinetianum), we were mesmerized for the entire 10 seconds or so while it remained on the branch.  Since males are more yellow in color while females are a more olive green, I believe this to be a male amakihi. 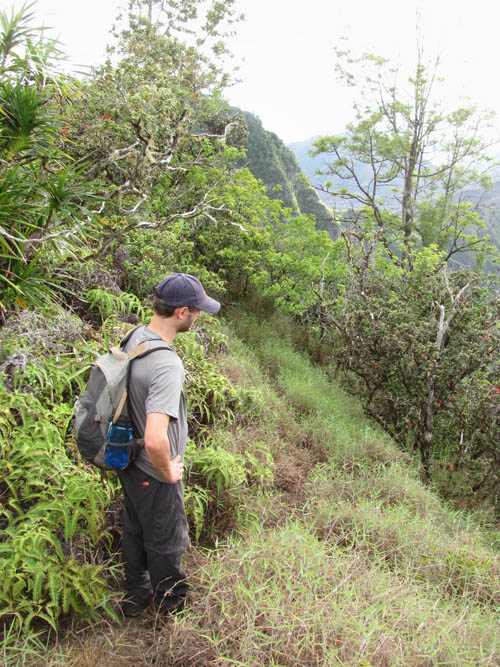 Soon it was time to leave and we made our way back up the side ridge to fenceline where we returned the way we had come. 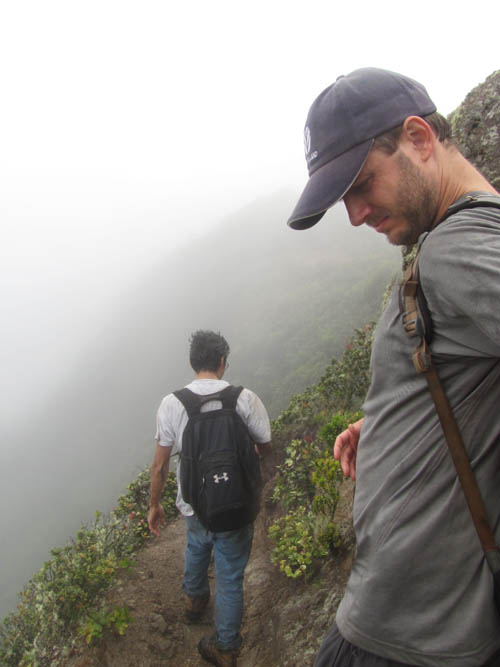 While making our way back, waves of clouds blew in once again, and the our hike back to our cars was just like how our hike started earlier in the day — in the clouds. 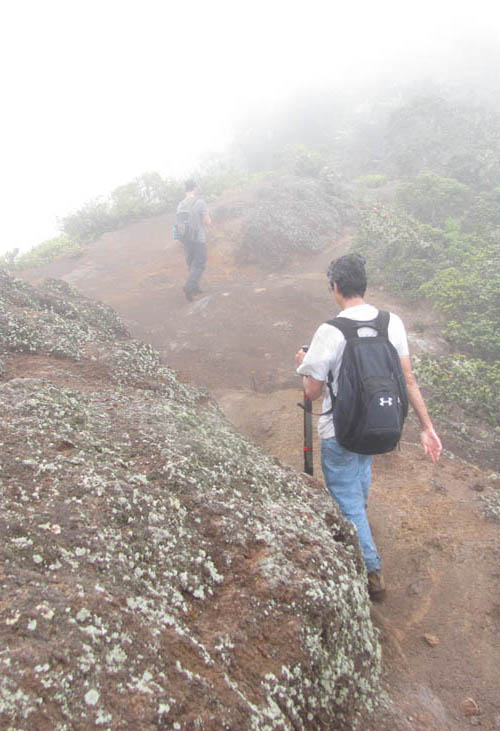 While making our way back down the trail, I reflected on the great time we had seeing kahuli crawling in the vegetation, odd-looking native grasshoppers in the leaf litter, and beautiful amakihi birds in the native forest.  What a great hike!