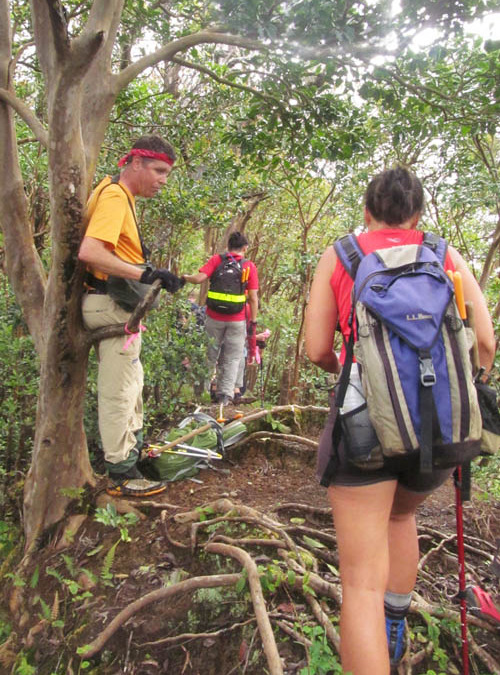 I joined the trail clearing crew of the Hawaiian Trail and Mountain Club (HTMC) to clear the Bowman Trail that leads to the ʻōhiʻa cloud forest at the summit of Kahuauli.

The Bowman Trail was built by the US Army in 1919 under the direction of Lieutenant Colonel Donald S. Bowman.  The trail leads from Fort Shafter to the summit of Kahuauli, the peak on the Koʻolau Summit Ridge overlooking the east side of Kalihi Valley. The trail follows the outline of the ridge and climbs up and down for a distance of about 5.5 miles for an 11 mile round trip. 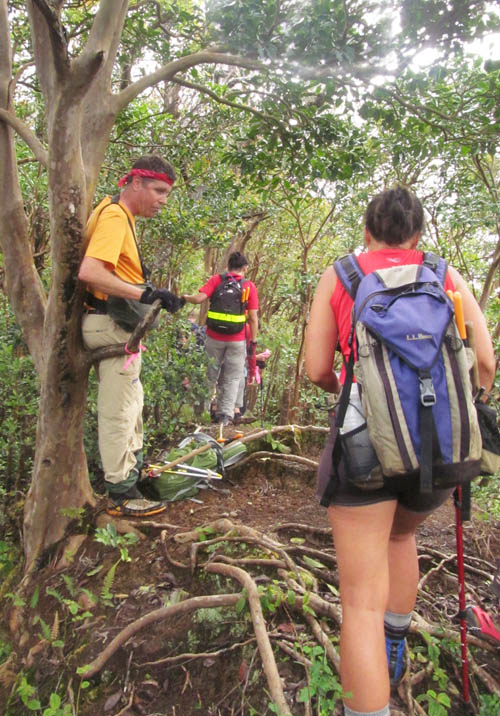 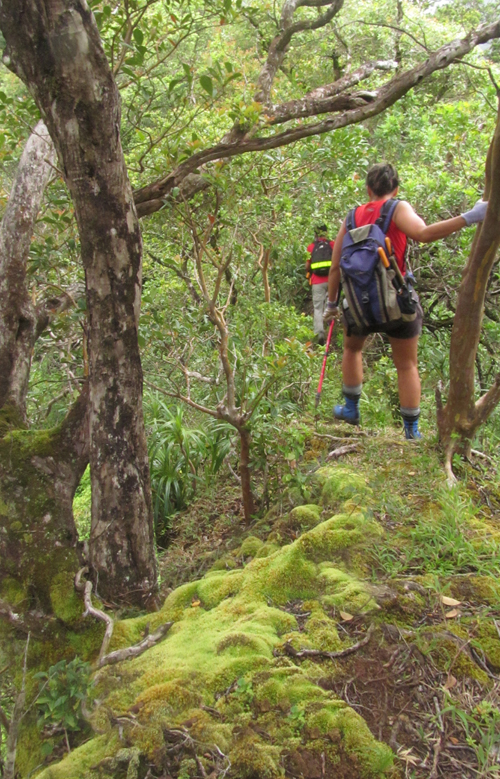 Being the moss-aholic that I am, I opted to join the group who took the shorter and faster route to the summit so I could spend more time in the moss covered ʻōhiʻa forest.  As we climbed up the spur I was just tickled to see lots of moss on the roots of trees. 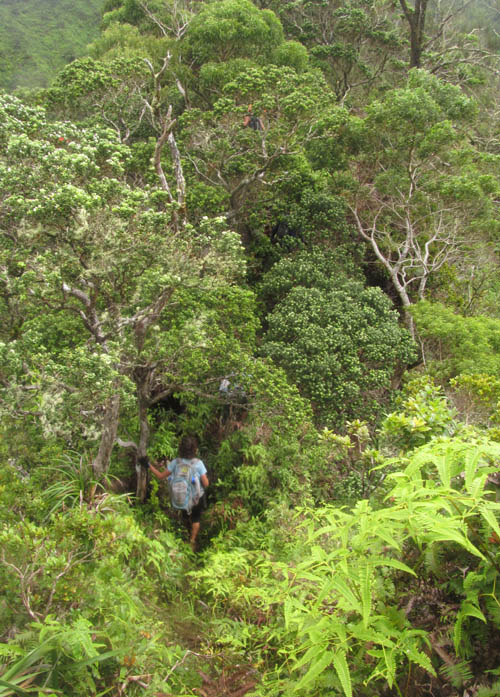 The spur climbed quickly and we soon found ourselves on the Bowman Trail.  The vegetation was generally well-behaved along this middle stretch of the trail so we we forged ahead to tackle the more over-grown sections further ahead. 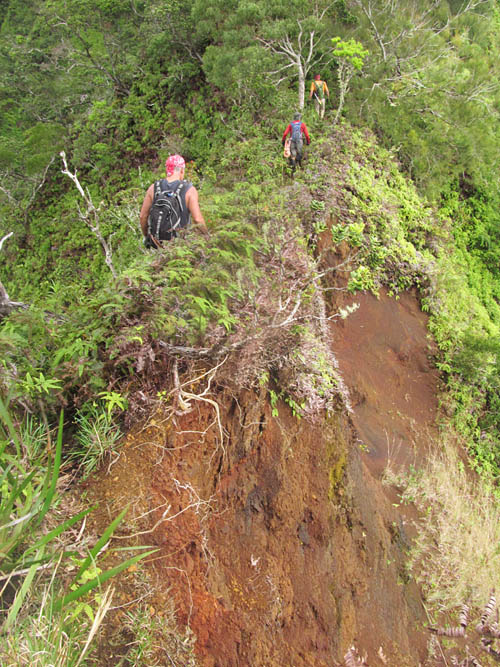 One of the cool sights along the way was a landslide that gouged out the mountain-side. 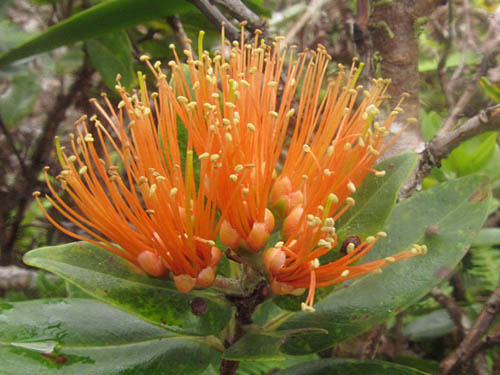 ʻŌhiʻa lehua flowers are one of my favorite things to photograph and I was pleased to see a rare bi-color lehua with orange stamens and yellow pistils. 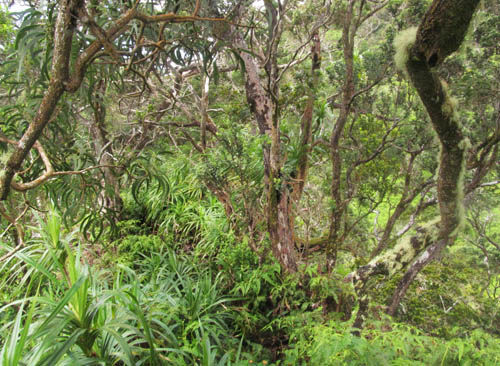 When the uluhe became thicker on the trail, we removed our machetes and sickles to cut back the unruly ferns. 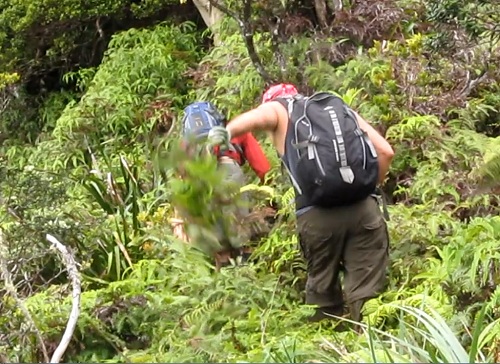 Soon we were all hacking away at uluhe ferns and other fast growing vegetation that blocked the trail. 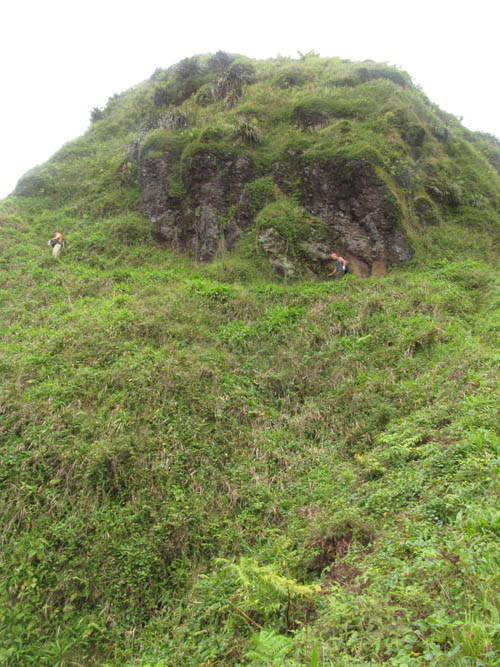 After climbing up the steep portion of the ridge where ropes have been installed, we contoured around a big knob formation on the way to the summit. 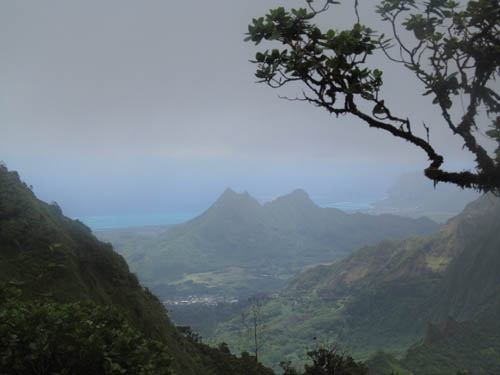 While making our way to the top, I peered through the Kalihi Saddle and saw Olomana off in the distance.  When I saw the steep knife edged ridge I marveled at how Chase Norton descended the incredibly steep saddle and made an equally steep ascent to Lanihuli with a full backpack during his epic 8-day trek from Pupukea to Makapuʻu. 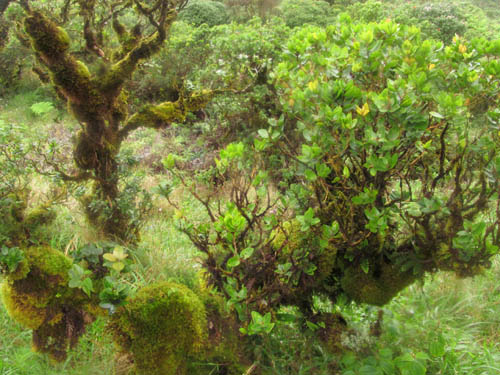 After continuing our climb beyond the knob, we finally reached the cloud forest which is dominated by moss covered ʻōhiʻa trees (Metrosideros polymorpha).  Moisture from passing clouds condense on the moss, drip down branches, and follow tree roots into the ground, where they begin their subterranean journey into the aquifer in the mountain. 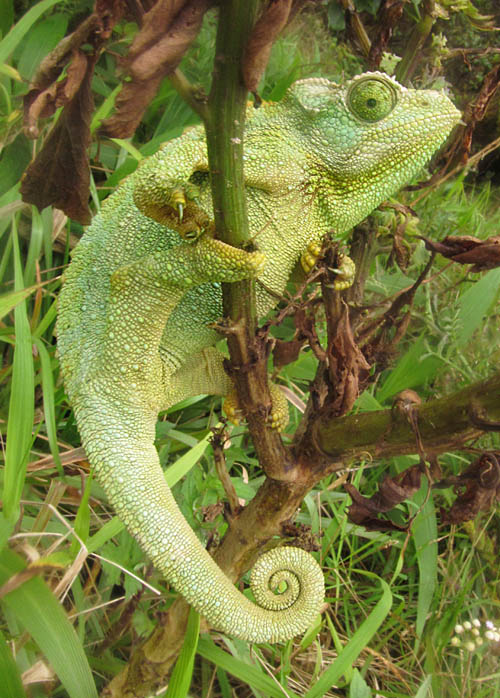 While exploring the mossy forest, I stumbled on a female Jackson Chameleon (Trioceros jacksonii) which is native to Africa.  While these creatures are ultra cool, they eat native snails and insects — many of which are rare or endangered. Since the chameleon does not belong in a sensitive native forest I was in a quandary what to do — while I could not leave it in the native forest, I did not want to kill it either. 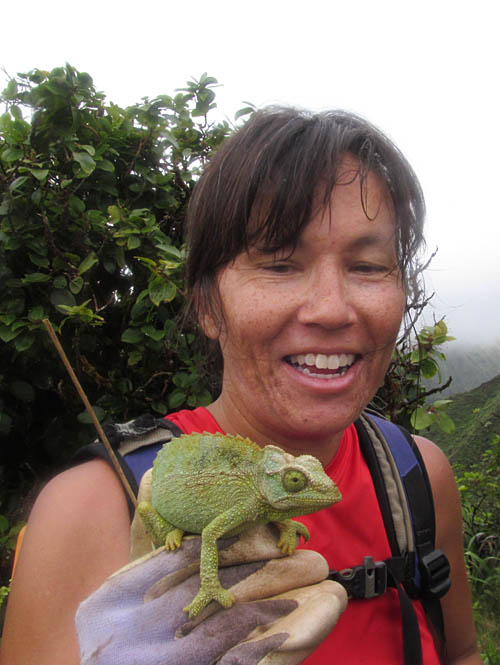 Ellyn Tong solved the conundrum when she stepped forward to take the creature home as a pet.  The chameleon took an instant liking to her and I was pleased that both problems were solved at once. 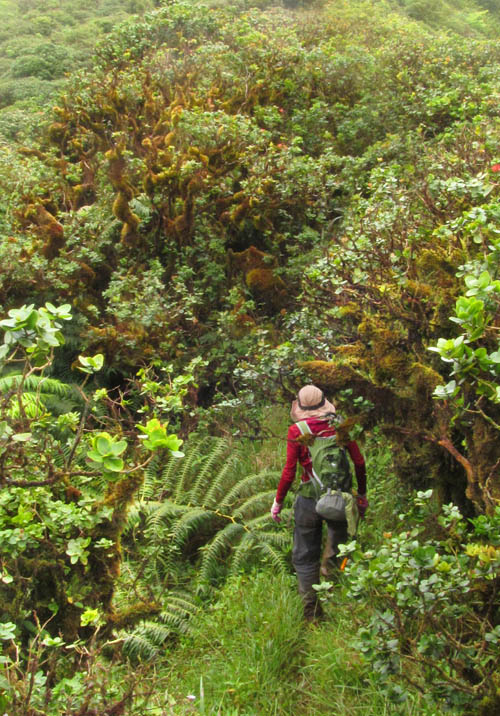 The moss covering the ʻōhiʻa trees give the landscape an other worldly appearance. 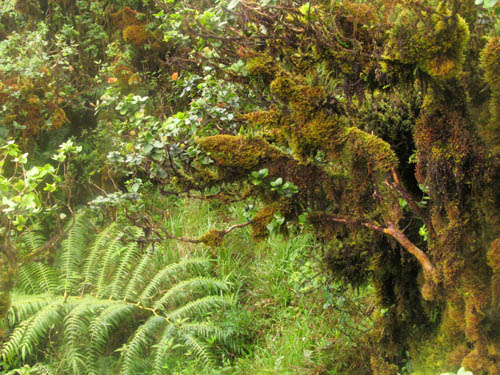 We saw a number of invasive mule’s foot ferns which have gained a foothold over the past few years.  We we cut their giant fronds and hacked at their core to prevent their spread. 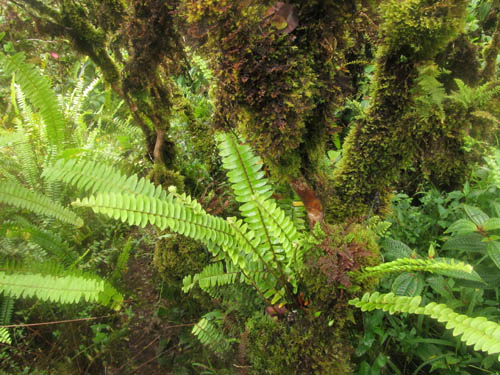 We saw a number of kupukupu ferns (Nephrolepis cordifolia), which surprised me since I was under the impression they preferred drier climates.  They apparently thrive in wet areas as well. 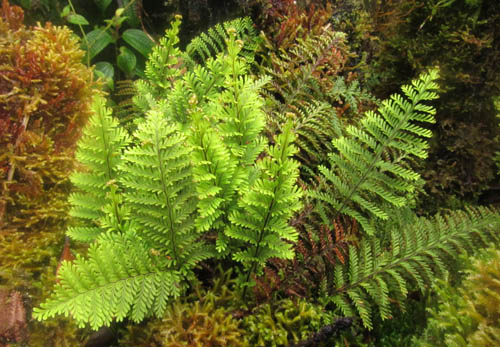 We also saw many wahine noho mauna ferns (Adenophorus tamariscinus) which grow on the ʻōhiʻa trees and have cute little fronds 3 inches long. 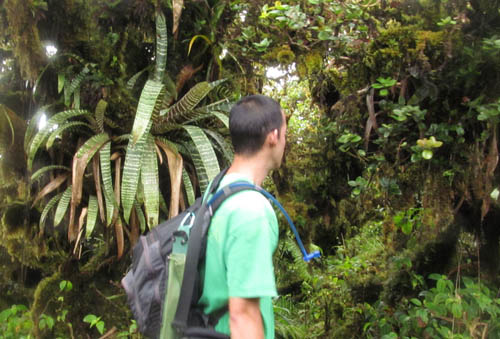 Another invasive plant we saw were bromeliads which grew on some of the largest ʻōhiʻa trees in the forest.  We spent quite some time hacking at them to prevent their spread. 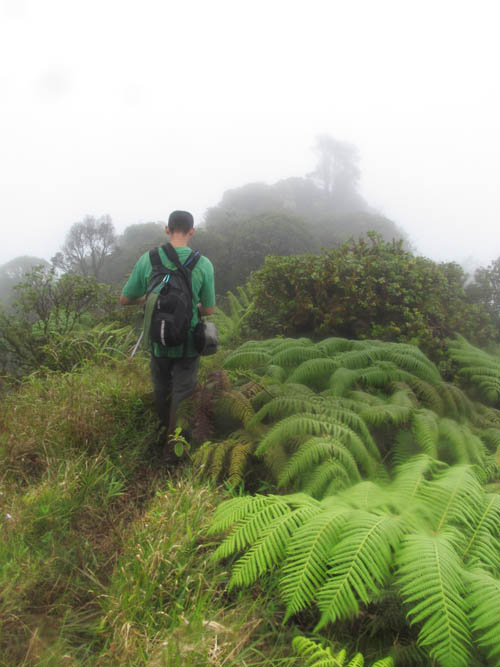 When we reached the summit of Kahuauli which is windswept and covered with grasses and low-lying hapuʻu ferns (Cibotium chamissoi), clouds blocked the view, and a strong wind made it cold.  So we did not linger after having lunch and turned around to return the way we had come. 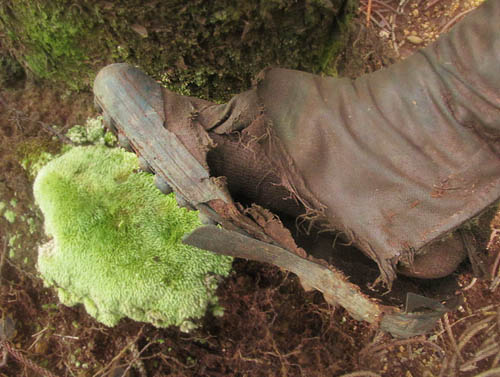 While making my way back out, I slipped on a muddy incline and a sharp root ripped the inside of my tabis.  This made climbing uphill awkward as my foot tended to slip out the backside with each step.  Fortunately, the downhill portions were not a problem so only the uphill sections were tenuous.

While hobbling my way back out I could not help my reflect on the great time I had climbing up the Bowman Trail, seeing a variety of native plants along the way, and experiencing the ʻōhiʻa cloud forest at the summit of Kahuauli.  What an awesome place to visit!