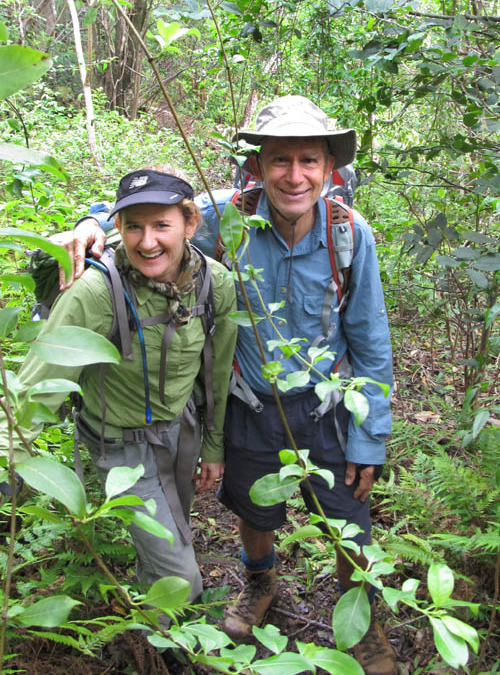 On the second day of our camp out we searched for native tree snails and happy face spiders in the mesic forests of the Mokuleʻia Forest Reserve.

It was a misty and overcast morning as we pushed-off from the hunter’s shelter to look for native plants and animals in Pahole Natural Area Reserve — which was established in 1981 and was carved from the larger Mokuleʻia Forest Reserve that surrounds it. Pahole is critical habitat for the endangered O‘ahu tree snail, O‘ahu ‘elepaio, and dozens of rare native plants and animals.

Joining me in the day’s adventure was Karen Liliker and Stuart Ball. If the name “Stuart Ball” rings a bell, its because he’s the author of “Hiker’s Guide to Oahu” and “Backpacker’s Guide to Hawaii”, the best books for serious hikers and backpackers in Hawaii. I was pleased to have two additional pairs of very capable eyes along with me in the search. 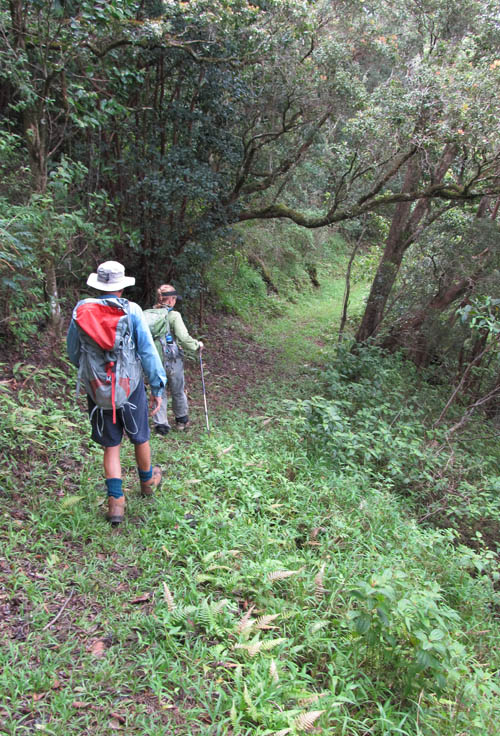 Pahole Natural Area Reserve ranges in elevation from about 1,200 to 2,590 feet and receives an average annual rainfall of 57 to 66 inches — making the reserve a mesic forest.  As we made our way along the trail by the fence line we looked on the backside of leaves to look for snails — who usually sleep on the underside of leaves during the day. 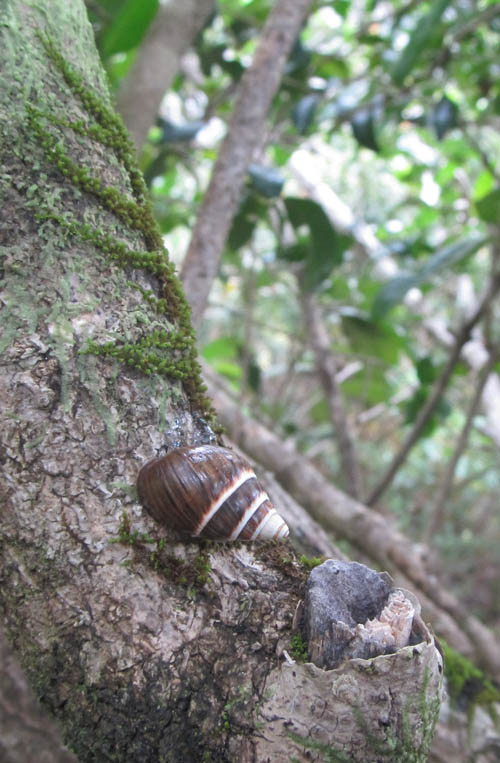 After searching within the foliage for quite some time we were thrilled to find a kahuli or Oʻahu Tree Snail (Achatinella mustelina) on the branches of an olopua tree (Nestigis sanwichensis).  Endemic only to the island of Oʻahu, the adult snail was about three-quarters of an inch long and was primarily brown in color with a white stripe that spiraled up the shell. 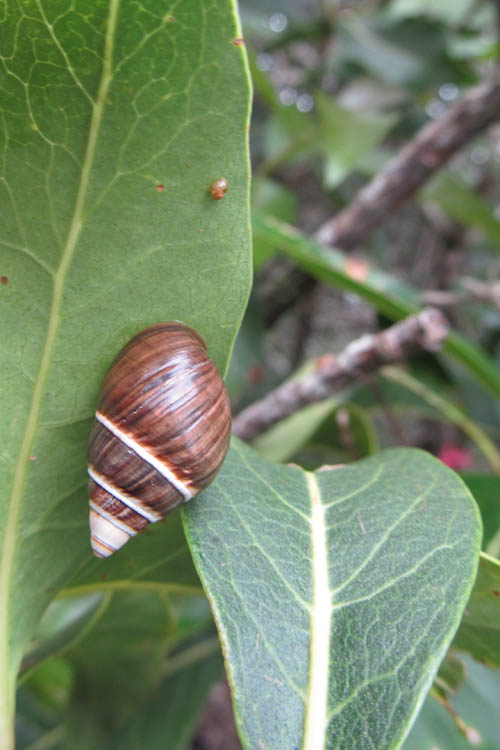 Several snails lived in this olopua tree, including a particularly large snail that was almost an inch long.  We also saw a number of tiny tornatellinid snails — no more than a millimeter or two in length — which lived on the same leave as this kahuli. 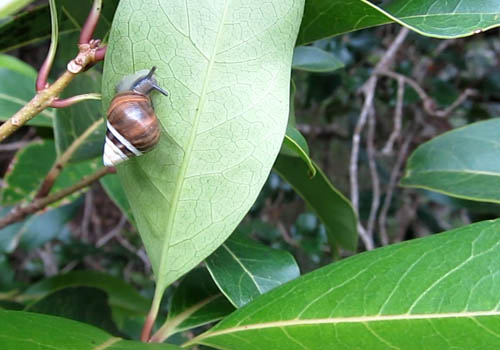 We were thrilled when we saw a smaller snail about half-an-inch long crawling about on the leaves!  Although they are mostly nocturnal, kahuli will sometimes come out of their shells during the day — especially when the vegetation is damp from low-lying clouds and early morning mists that condense as moisture on the vegetation. 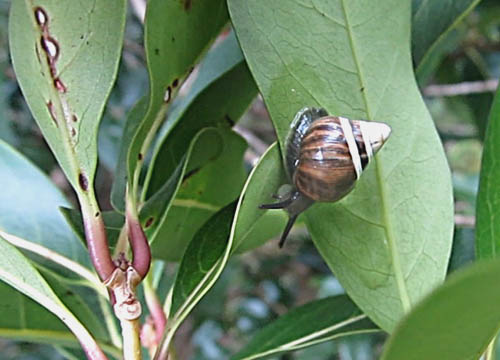 While watching the kahuli crawl over the leaf, I listened carefully for any sounds the snail might make.  According to tradition, kahuli “sing”, “chirp” or “whistle”, but I did not hear any sound as it glided over the the surface.  After watching and listening for nearly 30 minutes I lost patience and we moved on — watching a snail crawl is only a little more interesting than watching grass grow. 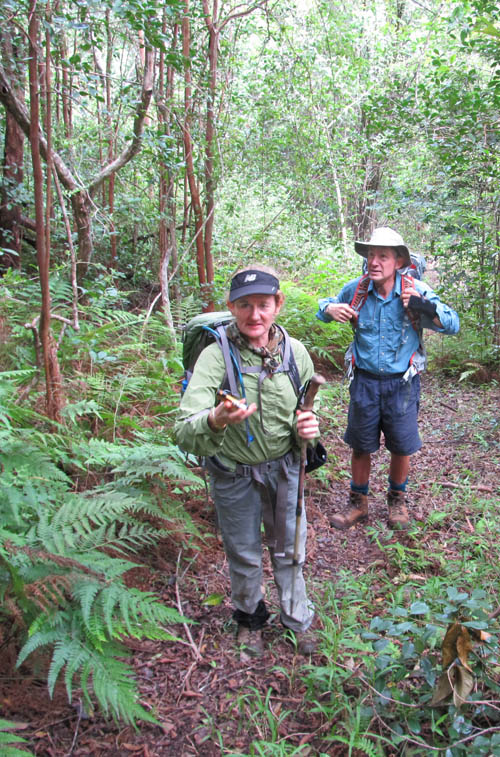 With the kahuli successfully found, the next leg of our adventure was to begin — searching for happy face spiders.  As made our way along the trail, we searched for the spiders whose bodies are a little smaller than a grain of rice and have really long thin legs that make the combined length of the spider almost three-quarters of an inch long. 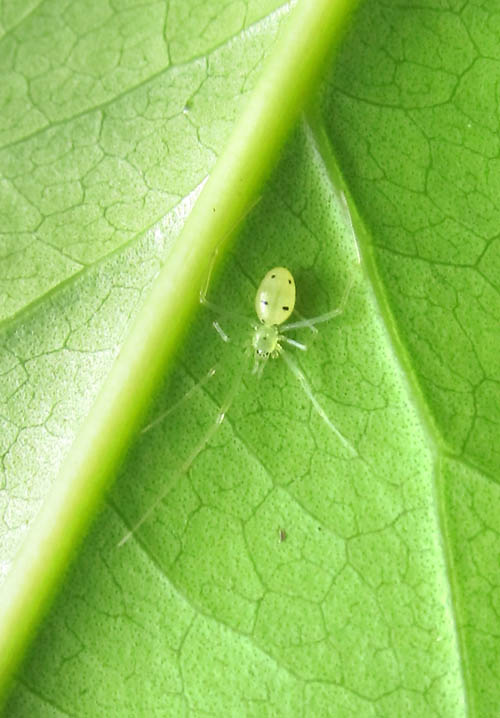 Eagle-eyed Karen Liliker spotted a happy face spider with a missing leg! Known as nananana maka kiʻi in Hawaiian, these spiders (Theridion grallator) are endemic to the Hawaiian Islands and can be found on the larger islands. The first spider we saw had 6 dots on its abdomen. There is wide variation in the pattern on the topside of the spider’s abdomen — it has been my experience that most of them do not have a smiley face pattern. The pattern on the spider’s abdomen is so small that I am only able to tell what the pattern is by magnifying the digital image in the viewer of the camera. 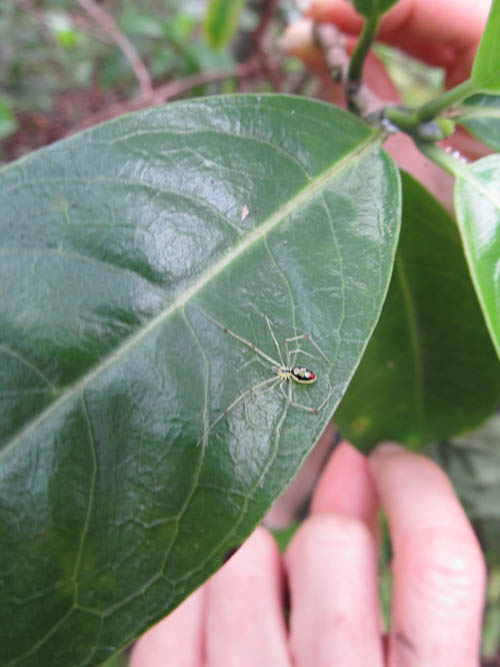 One of the spiders we found, had a much more elaborate black and red pattern on its abdomen, but did not exhibit a “smiley face”. Unlike the others who remained completely stationary, this spider was more bashful and crawled away to the underside of the leave whenever we turned in over. So we ended up chasing the spider several times around the leaf. 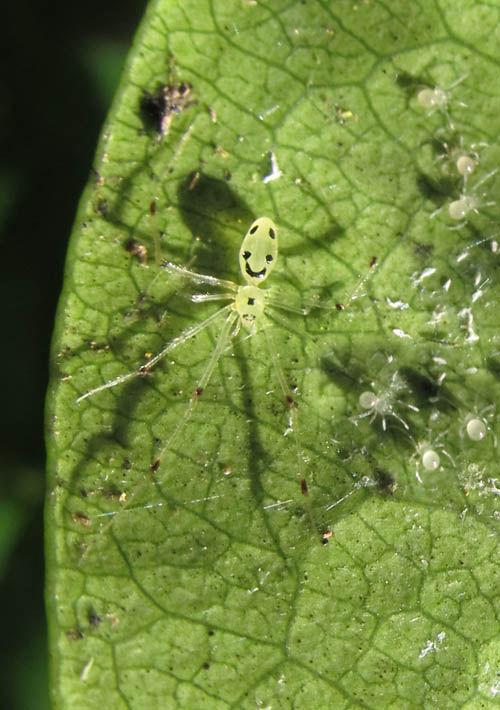 Karen found a mother spider with baby spiderlings! And the mother had a smiley face on its abdomen — the only one we would find for the day! Happy face spiders protect their eggs, catch food for their young, and raise them until they are old enough to survive on their own. 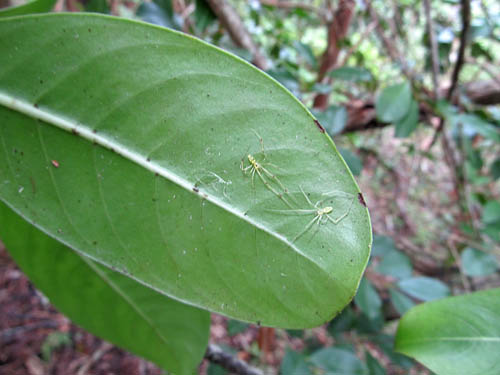 Stuart found two spiders on the backside of a kopiko leaf (Psychotria mariniana) which we believe had amorous intentions. They were very close together with their long legs touching when we found them. We suspect we caught them just before they were about to mate.

All in all we found 8 adult spiders one of which had 10 spiderlings on the backside of the leaves. As we made our way back to camp I reflected on our good fortune seeing these cool little critters in the Mokuleʻia Forest Reserve and capturing my first video of them in the native forests. What an awesome hike!

For more photos of happy face spiders with smiley faces, check out these links:
Camping in the Mokuleia Forest Reserve
Happy Face Spiders on the Mokuleia Trail
The Mists of Mount Kaala