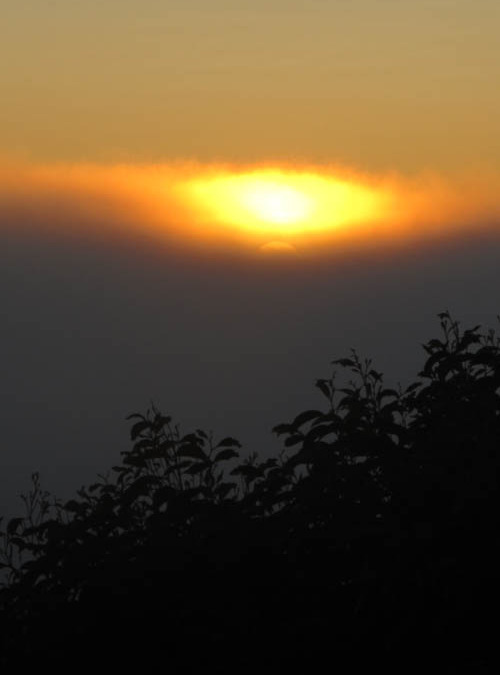 On the second day of our service project we outplanted endangered native plants under the shade of koa and ʻōhiʻa trees in Hakalau National Wildlife Refuge.

Right at the crack of dawn we were treated to an unusual sunrise in the koa trees around our cabin.  A clearing in the clouds opened-up just above the sun in the shape of an eye, and just the upper most edge of the sun could be seen — a most peculiar sight. 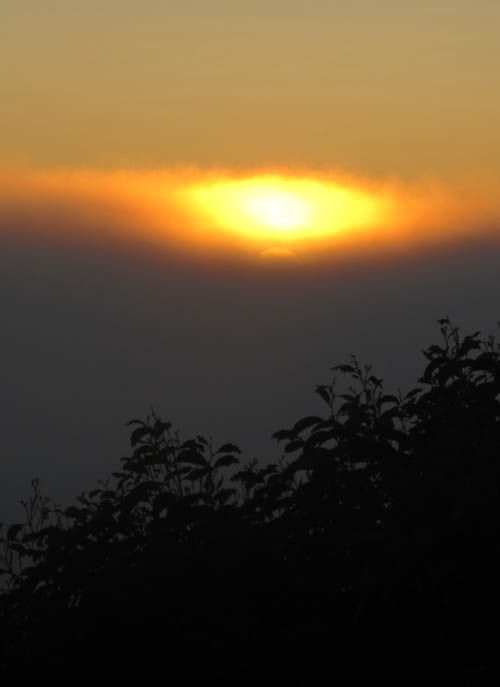 After admiring the sunrise and having breakfast, we were eager to tackle our appointed task for the day — to outplant native plants in the refuge. 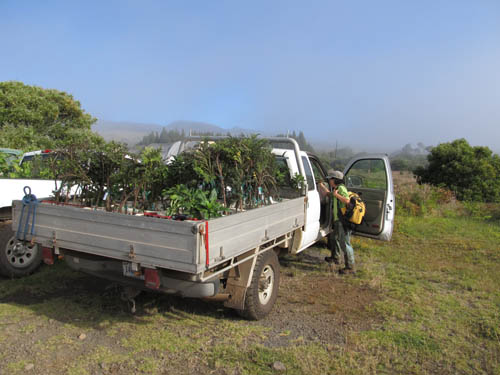 The day before, we loaded 25 laundry baskets with 200 native plants in 2 trucks.  Baron wanted to outplant 4 different types of endangered native plants that were raised from seed and grown for 2-3 years in 4-6 inch pots in the greenhouse, before being taken into the wild. 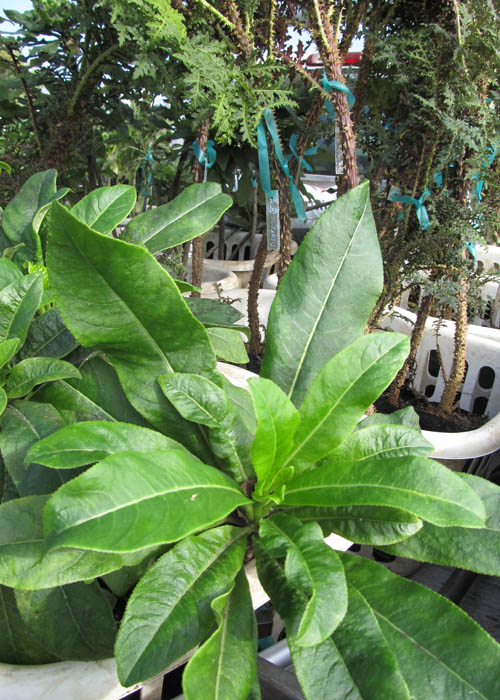 The plant up close is oha wai (Clermontia lindsayana) and the plant in the back is haha (Cyanea shipmanii).  Also included but not in the photo is another species of oha wai (Clermontia pyrularia) — all three of these endangered plants are in the Hawaiian lobelioid family. 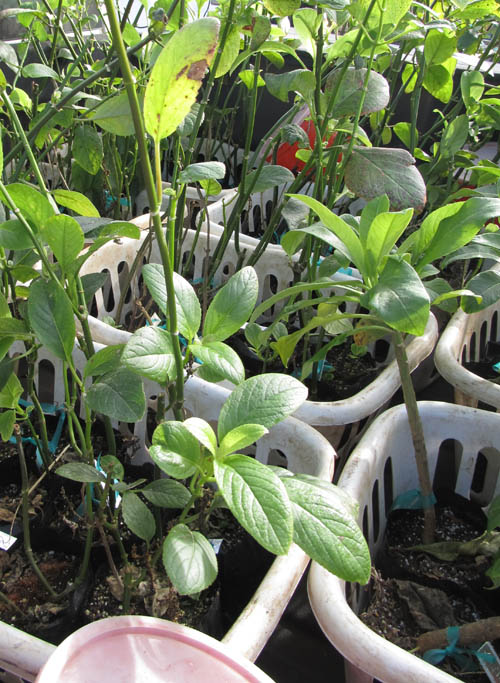 The other endangered native plant we were outplanting was kapana — a species of mint (Phyllostegia brevidens).  The distinctive thing about Hawaiian mint species is that they have lost their ability to produce menthol and are known as “mintless mints”. 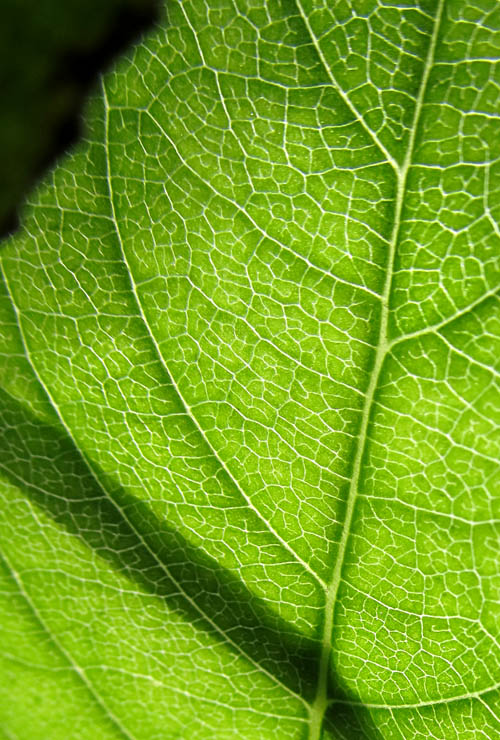 With sunlight shining through the leaf from the backside, I got up close up to see the intricate vein pattern. After loading everything into the trucks, we all jumped in and drove to the Maulua Unit of the refuge. 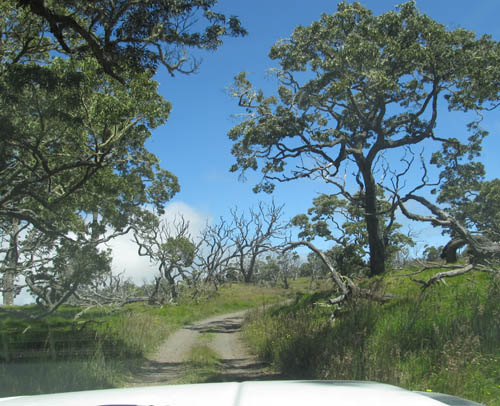 Although the day started with blue skies, clouds rolled in and enveloped the landscape in a fine mist as we drove to the outplanting site. 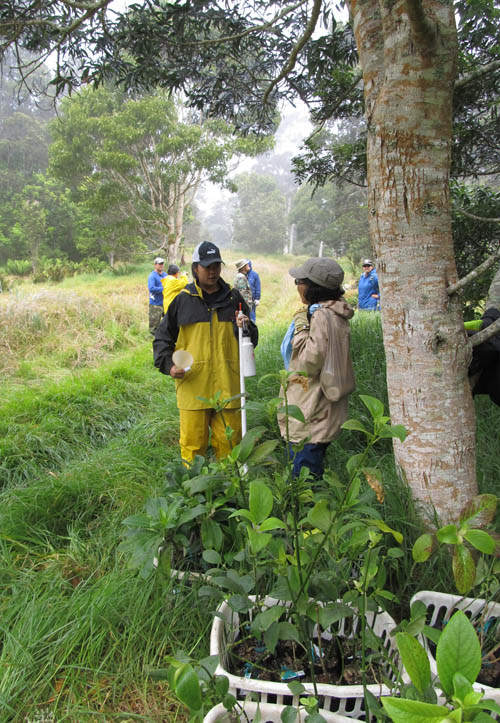 When we reached the outplanting site, moisture from the clouds condensed as water droplets and gave the forest a sip of water. After Baron trained us in the outplanting procedure he led us into the forest looking for nice shady spots with deep soil.  We carried our tools and baskets of plants to places where large trees shade the understory from the direct rays of the sun. 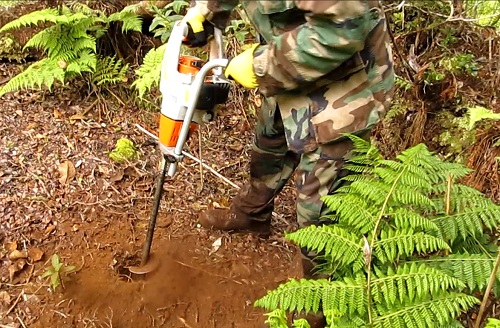 When we found places with deep soil, the gas-powered augers made quick work digging holes. When the spot was covered with grass and/or stones we used a pick to clear the area before excavating the hole. 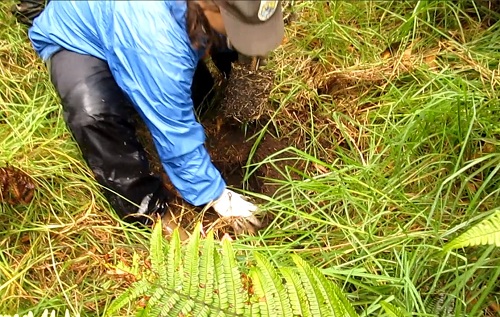 We mixed fertilizer into the soil and put the plant in the hole,  We then filled the hole with soil and covered the roots.  We had such a great time that time flew by and we outplanted 200 plants in just under 4 hours. 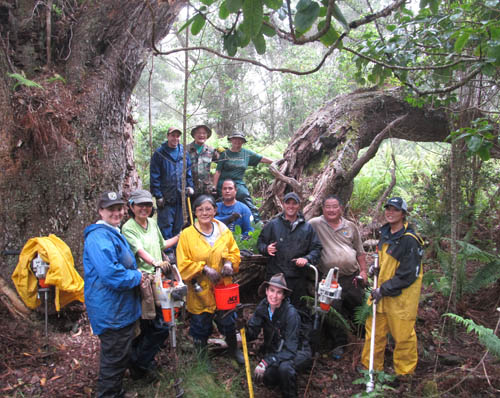 When we reached a large koa tree the group posed for this shot: kneeling in front: Amber, standing in 1st row: Cashell, Pauline, Janice, Mahi, Jackson, Baron, Stephanie, and standing in back row: Steven, Richard, and Linda. 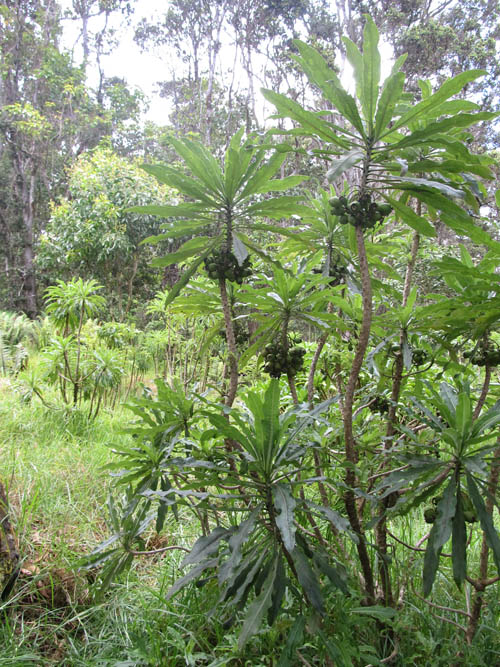 Adjacent to our site was a patch of endangered plants outplanted several years earlier.  It was great to see some of the oha wai (Clermontia lindsayana) with lots of fruits. 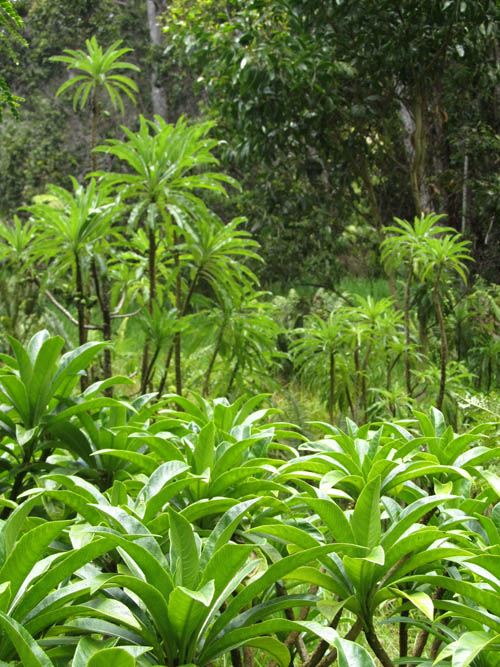 One of the more impressive sights was a patch of oha wai (Clermontia pyrularia) under a grove of mid-sized ʻōhiʻa trees. 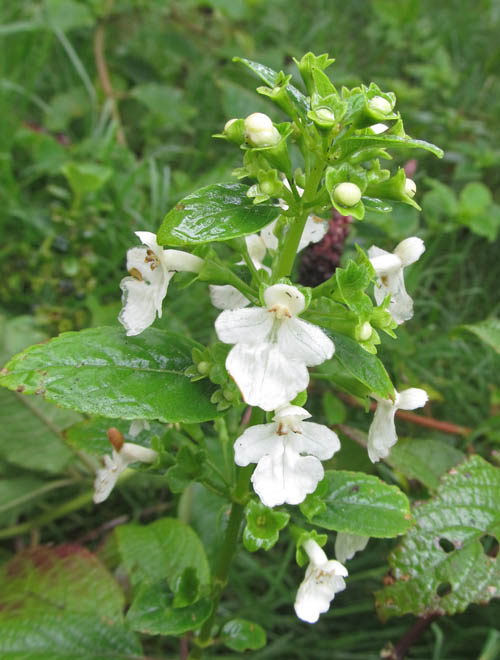 We were thrilled to see one of the native Hawaiian mints (Phyllostegia brevidens) in bloom with white flowers. 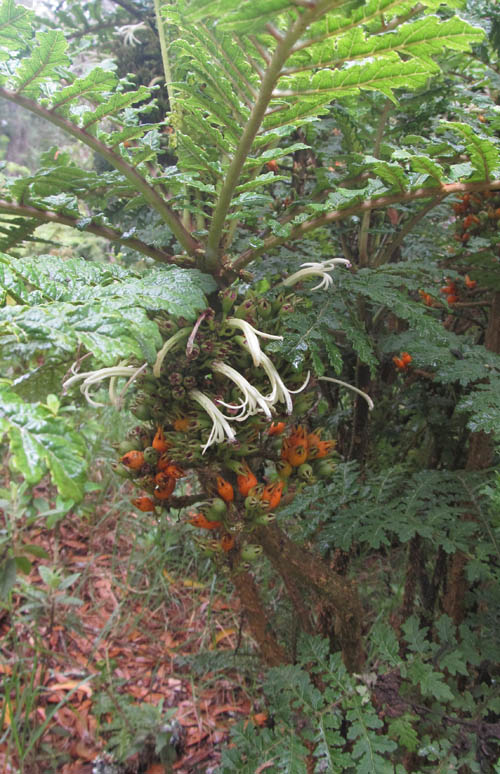 But what really caught my eye was the Cyanea shipmanii many of which were in bloom with white flowers and/or had orange fruit. 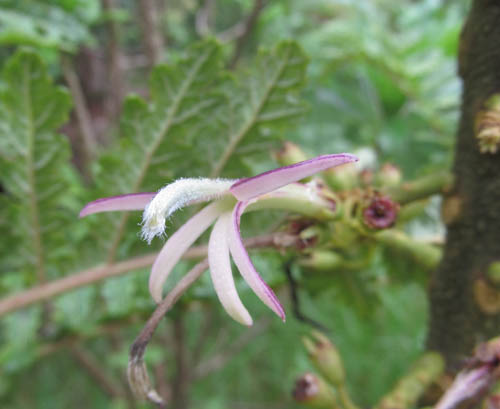 While most of the Cyanea shipmanii flowers were completely white in color, a few were tinged magenta along the edges of the flower. 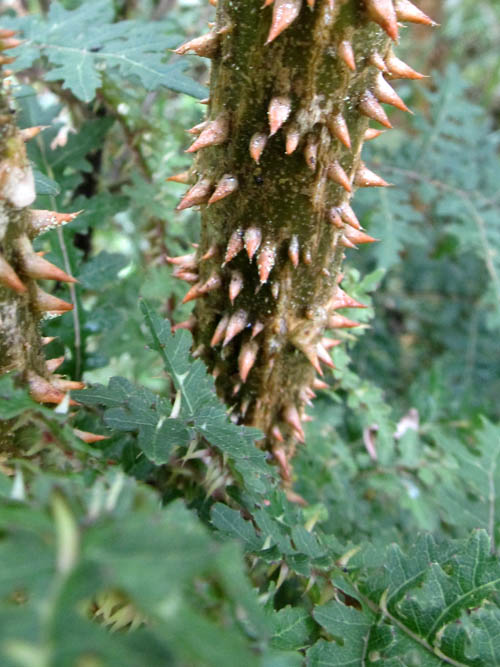 The fascinating thing about Cyanea shipmanii is that unlike many native plants which have lost their ability to produce thorns, this lobelia went in the opposite direction and evolved sharp prickles on its leaves and spiky thorns on its trunk. 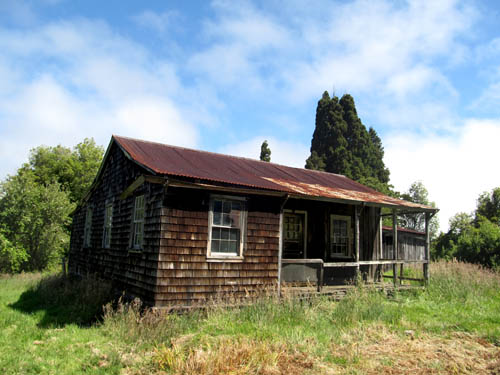 After eating lunch, we drove to the Pua Akala Unit of the refuge where an old cabin built in 1883 still stands.  Built originally as a vacation house by the Hitchcock family, the cabin became a bunkhouse and rooms were added when the Shipmans leased the land to raise cattle. 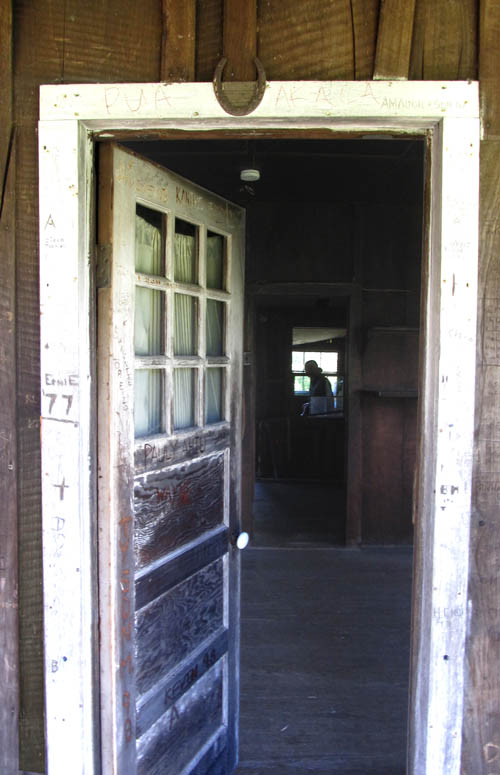 The cabin was in remarkably good shape for its age. Baron told us strange things about the cabin and said many believe it to be haunted. Both Baron and Pauline chose not to go inside — I wonder why — but curiosity got the best of several of us and we could not resist seeing the inside of the cabin with our own eyes. 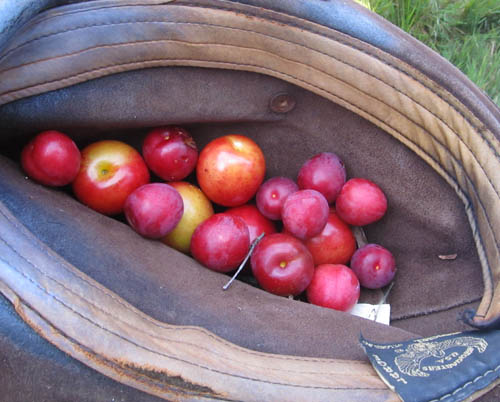 While we looked in each of the half-dozen or so rooms, the main group went straight to the plum trees planted around the cabin. Baron knew the plums were in peak season and wasted little time picking the delicious fruits. 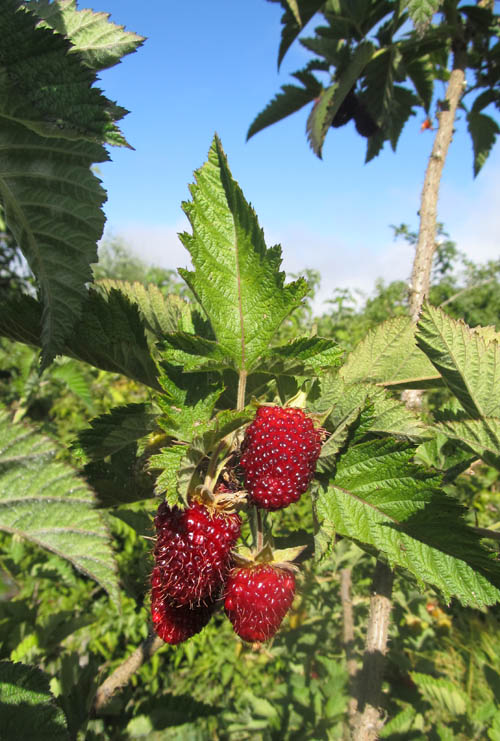 We also picked ʻakala — the native raspberry — (Rubus hawaiensis), which evolved to lose/reduce its thorns. We saw two varieties — one with red berries and the other with yellow berries.  The largest ʻakala berries were about 2 inches long and were delicious. 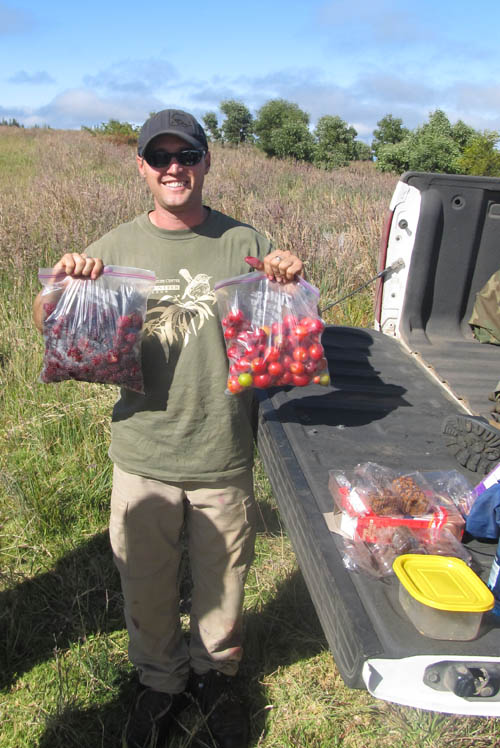 Jackson holds up bags of ʻakala berries and plums.  While making our way back to our cabin, we spotted a juvenile ʻio — the  the native hawk — (Buteo solitarius) off in the distance.  ʻIo are on the federal list of endangered species and are extremely rare. We drove up the hill and around the backside of the tree to get a closer look.

Fossils indicate that ʻio once inhabited nearly all of the Hawaiian Islands but today it is only known on the Big Island.  ʻIo feeds on rats, small birds, stream animals, crickets, praying mantises, millipedes, centipedes, and occasionally worms.  We were thrilled when the ʻio called our several times and fluffed its feathers before flying-off. 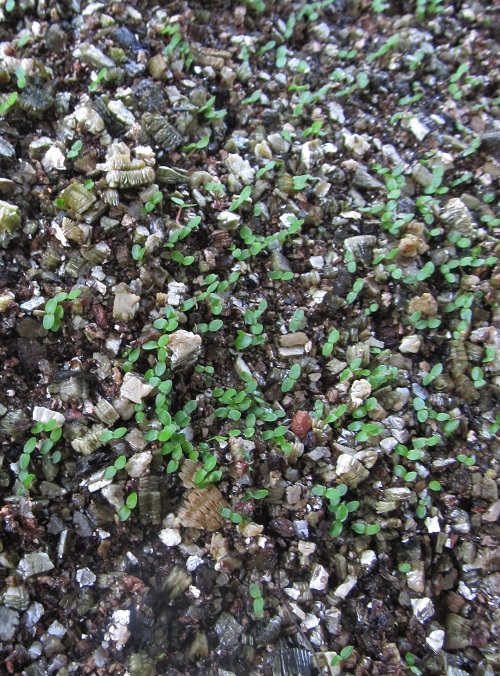 After driving back to our cabin, we went to the greenhouse to help Baron transplant seedlings into pots. The plants we had just outplanted in the refuge needed to be replaced so we had to start a new generation of plants in the greenhouse. 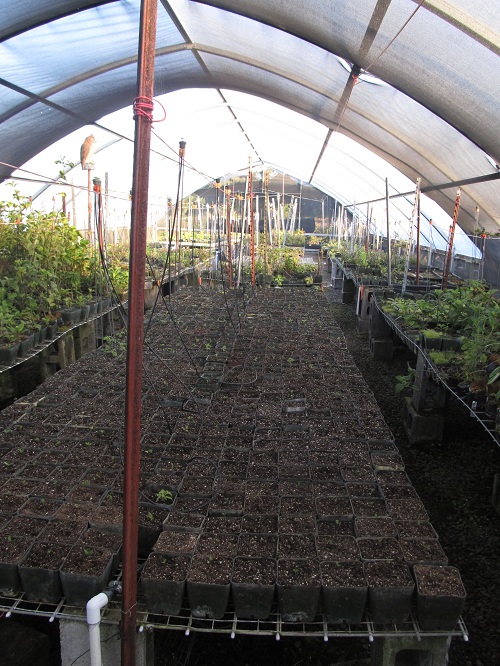 We took ʻōhiʻa and other plants sprouted from seed and transplanted them into 4 inch pots. We then arranged the pots under the irrigation system where they would be watered and nurtured to outplanting size in the greenhouse. 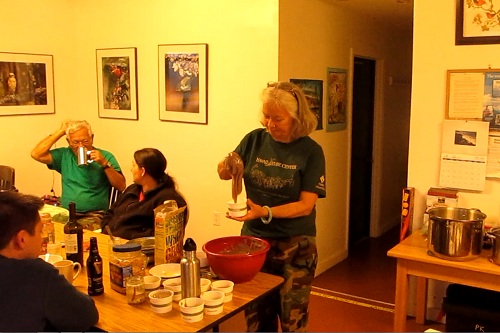 Once our work was done, we went to our cabin and watched Linda make a really thick poi and Pauline prepare kalua pig and cabbage. When the sun set for the day, the temperature dipped into the 40s again so we bundled up to keep warm. Dinner was so delicious that we wasted little time chowing down and spent the rest of the evening playing Hulo — a Hawaiian word scrabble-like game, talking story, and enjoying each others company.

After dinner, Stephanie and Amber pureed the ʻakala berries, strained out the seeds, and reduced it into an ʻakala berry sauce.  As the sauce reduced over the stove we reminisced about the great time we had outplanting endangered plants, seeing native plants that evolved in opposite directions — one losing thorns while the other evolved them, and visiting the old haunted cabin at Pua Akala.  What an awesome day!