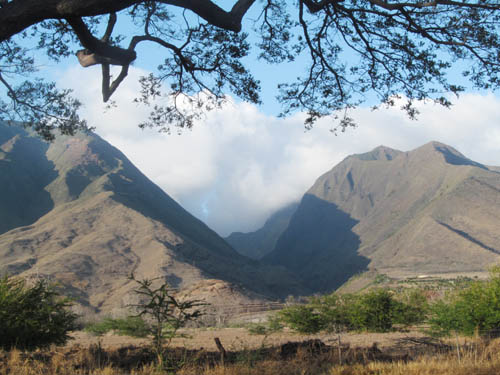 We hiked to the very back of Olowalu Valley in the West Maui mountains to look for native damselflies and tree snails.

At 5,788 feet elevation, the summit of the West Maui mountains — Puʻu Kukui — receives incredibly high rainfall — about 32 feet per year.  Over the passage of time, the mountains have eroded into a series of amphitheater valleys with narrow entrances that open up into bowl-like valleys in the back.

Located 6 miles southeast of Lahaina, Olowalu lies in the rain shadow of Puʻu Kukui and is exceedingly dry along the coast.  But the huge rainfall over Puʻu Kukui and the aquifer that absorbs that precipitation supplies Olowalu Stream with copious amounts of water year-round. 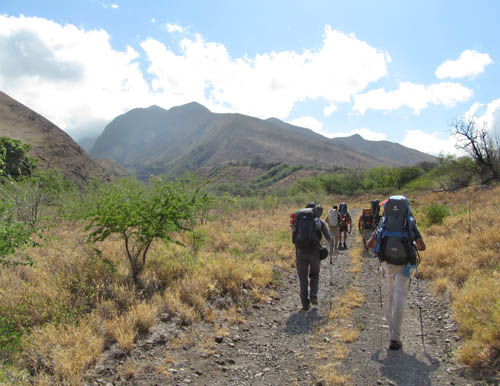 High on a precipitous ridge between the valleys of ʻĪao and Olowalu was a treacherous route — the ʻĪao-Olowalu Pass — that was used prior to Western contact to shave days off a journey on foot from Lahaina to Wailuku.  This is the route Kalanikupule is said to have used in his 1790 to escape from ʻĪao Valley after his defeat to Kamehameha in the battle of Kepaniwai. 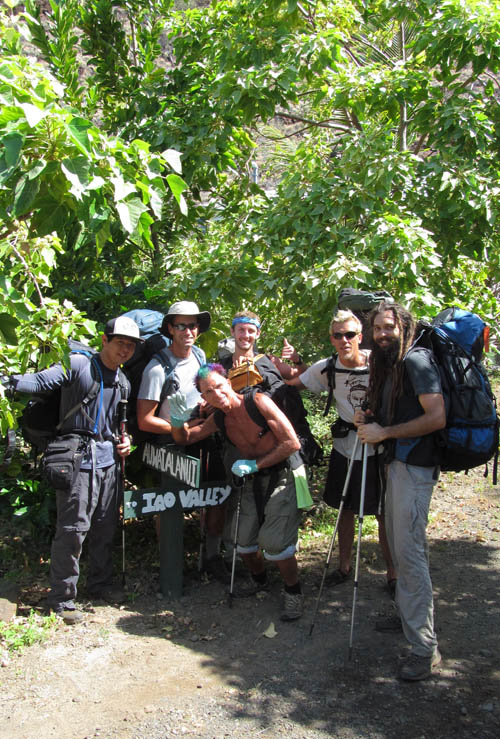 Pete Clines led our group past the petroglyphs and up the dirt road to the narrow entrance of Olowalu Valley.  When we reached this really cool sign that pointed the way to ʻĪao Valley, we had to stop for a group photo — from left to right: Cory Yap, Pete Clines, Laredo Muredo, Chase Norton, Nectar Nipp and August Smith. 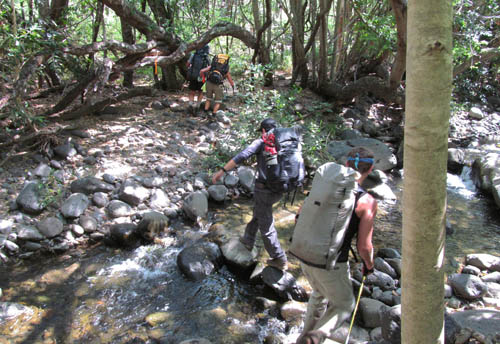 Thanks to the Olowalu Cultural Reserve which maintains the trail, bridge, taro patch, native gardens, and historic sites, we pushed-off on a nicely maintained trail that leads deep into the valley. 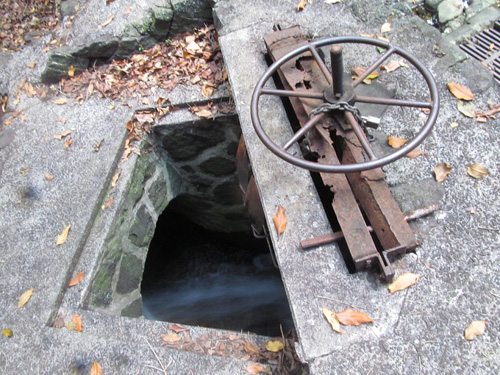 When we reached a dam where the stream is channeled into a ditch, we stopped to inspect the water diversion built by the sugar plantations when sugar cane was cultivated along the Olowalu coast. 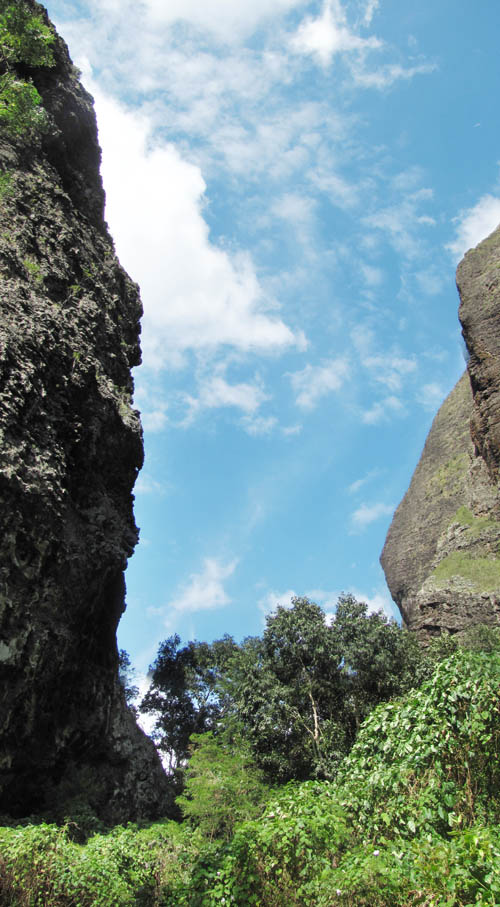 The walls of the valley narrow to a choke point which made it a natural fortress during times of war in pre-contact Maui.  We marveled at the steep cliffs and speculated that torrential rains must have carved this chasm eons ago. 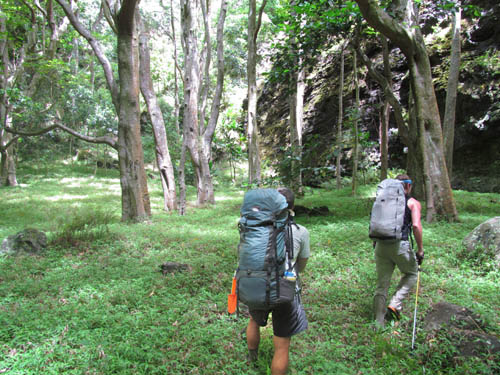 When we reached a large grassy area — perfect for camping — we stopped for a bit to enjoy the park like setting before pushing off again. 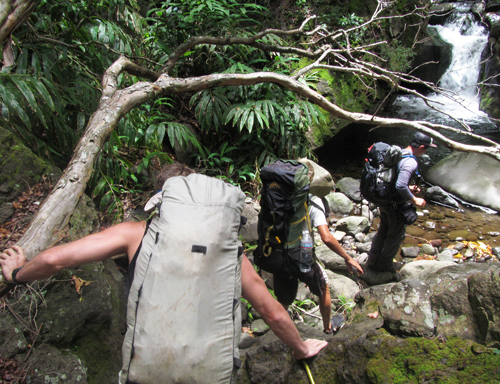 We continued hiking up the valley and crossed the stream multiple times until we came to a nice waterfall and pool. 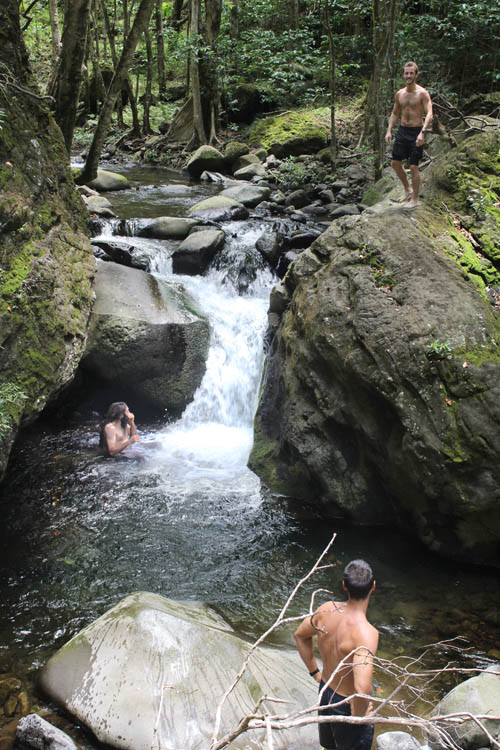 The water called to us and we could not resist splashing around for a bit.  Pete looks on as August enjoys the pool and Chase stands on a boulder over the waterfall. 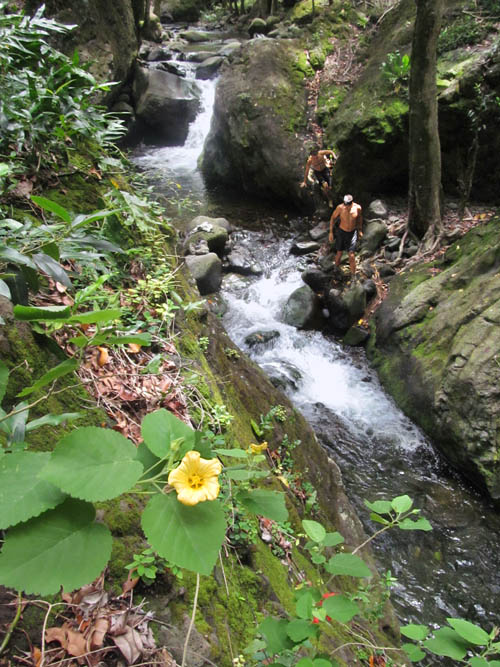 The remarkable thing about this spot is that there are several enormous boulders — which must have fallen from the cliffs above.  I was pleased to see ʻilima kuahiwi (Sida fallax) growing on the largest of the boulders which was about the size of a large fire engine truck. 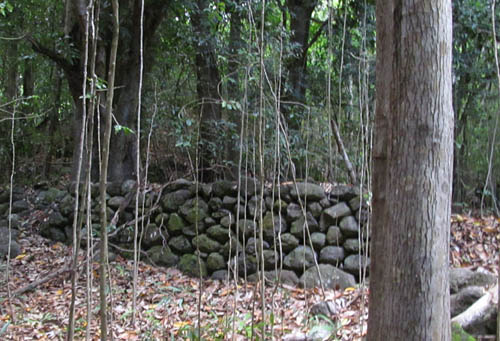 When we continued up the valley we came across a rock wall constructed with slanted walls which led me to speculate that it was built before Western contact. 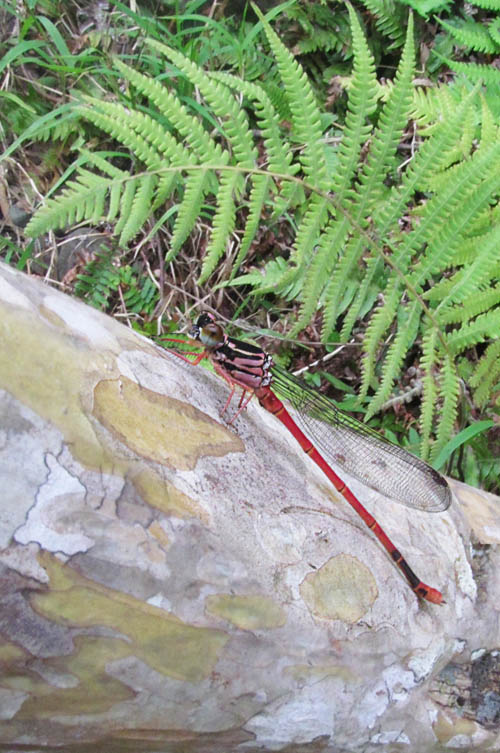 We saw a number of endemic damselflies (Megalagrion blackburni) about 2 inches long that had a pink and black thorax and red and black abdomen.  Some of them were indifferent to my presence and allowed me to get real close. 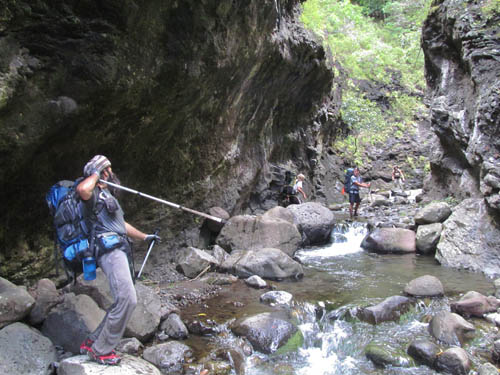 The coolest part of the hike was where the valley walls closed in and forced us to hike in the stream gorge. 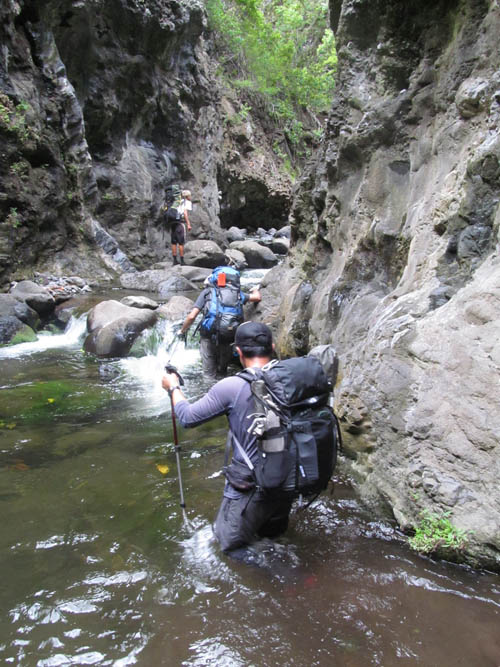 With the passage so narrow and the walls so high this would be an exceedingly bad place to be in a flash flood. 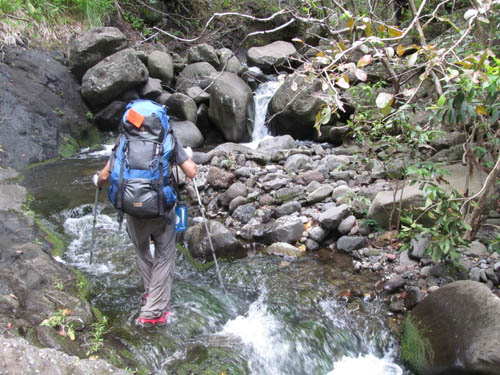 The gorged opened up as we made our way further up the valley and the elevation began to climb more steeply. 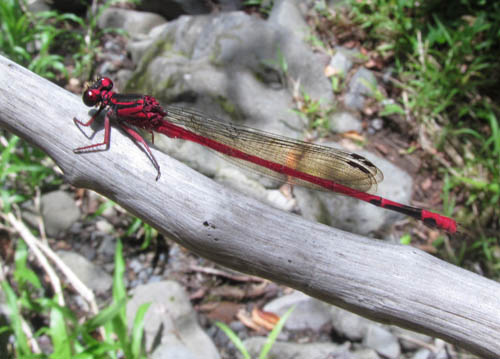 Some of the other Megalagrion damselflies we saw were red and black in color with an intense shade of crimson. 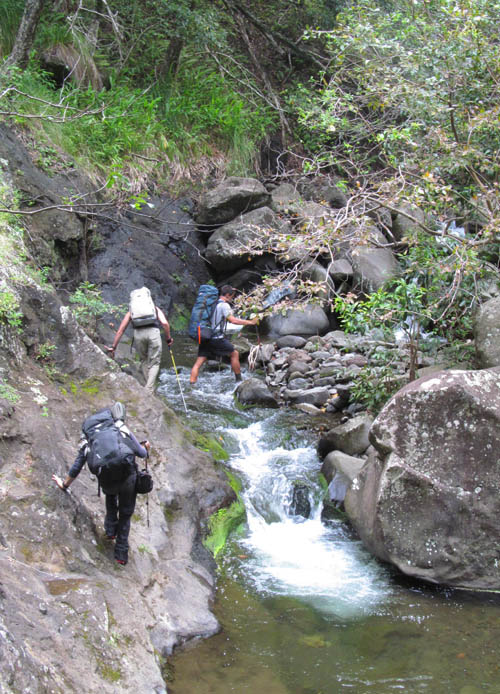 After passing several forks in the stream, we encountered a series of small rapids. 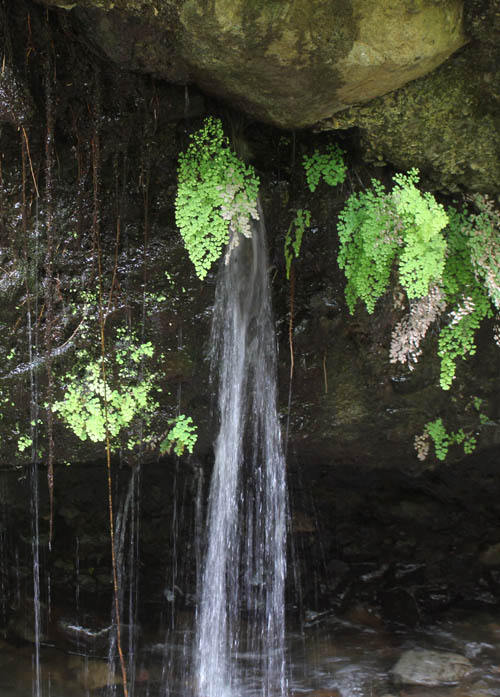 One of the more amazing sights was a spring that emerged from a hole in the rock into the stream. 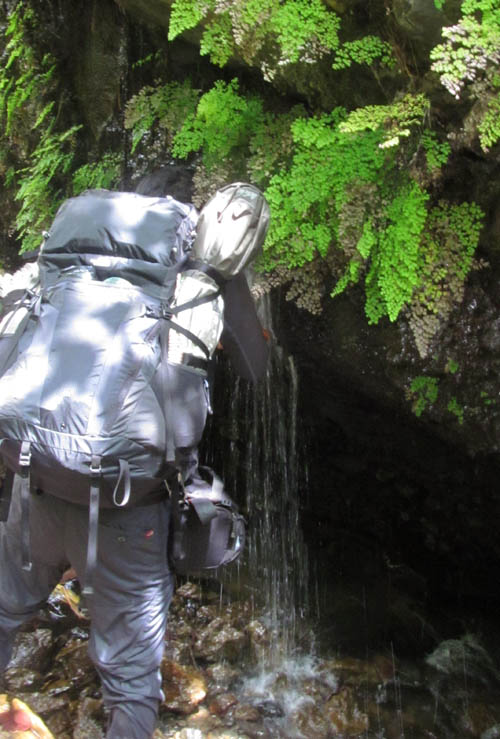 We could not resist sticking our heads under the springs to cool off and drink the pristine ground water. 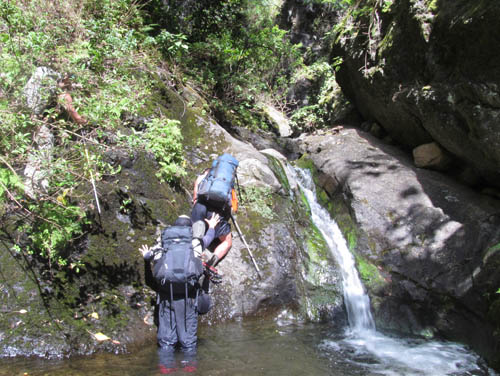 We continued to gain elevation and climbed up along-side a series of small waterfalls. 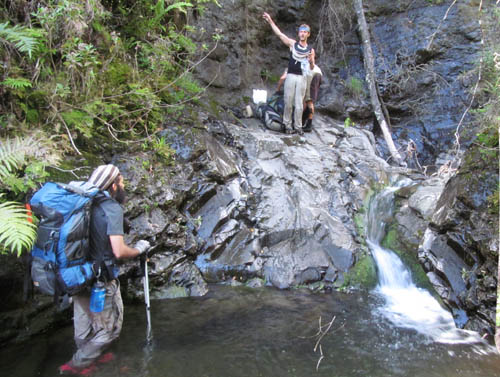 When the waterfalls became too high to safely climb we noticed a small spur we could exploit to bypass the waterfall. 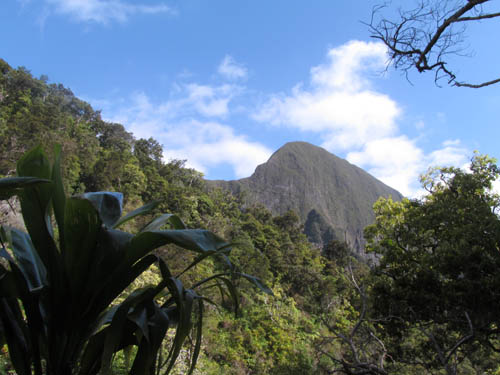 The spur enabled us to ascend up the saddle ridge that separates Olowalu from ʻĪao. 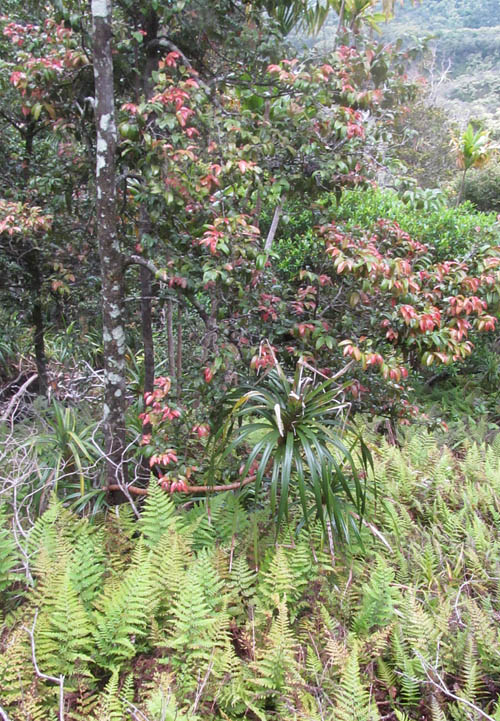 While climbing up the ridge we saw several lama trees (Diospyros sandwicensis) with a new growth of pink leaves growing over patches of palapalai ferns (Microlepia strigosa). 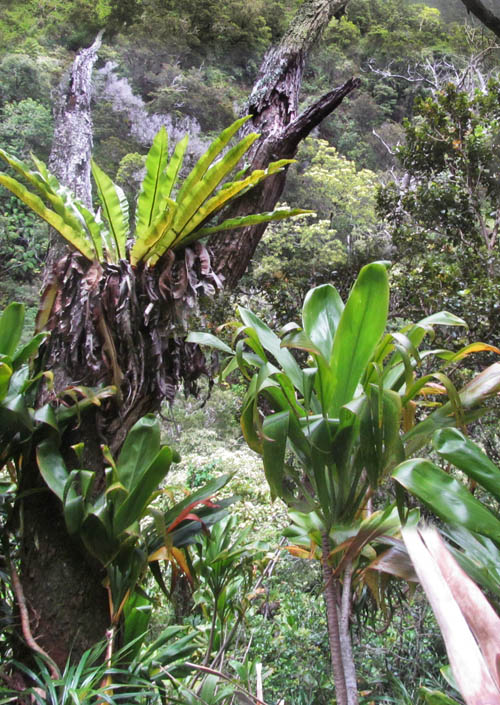 We reached a spot dominated by ʻōhiʻa trees (Metrosideros polymorpha), ekaha ferns (Asplenium nidus) and tī plants (Cordyline fruticosa ).  Since tī is vegetatively propagated and was used for shelter and rain gear in ancient times, I speculated that they might have been originally planted by the pre-contact inhabitants of Maui who used the plants during their journey over the ʻĪao-Olowalu Pass.

When we looked closely at the tī leaves, I was thrilled to see native tree snails or pūpū kuahiwi.  The shape of the shell was reminiscent of Auriculella snails on Oʻahu but their colors and markings were different. 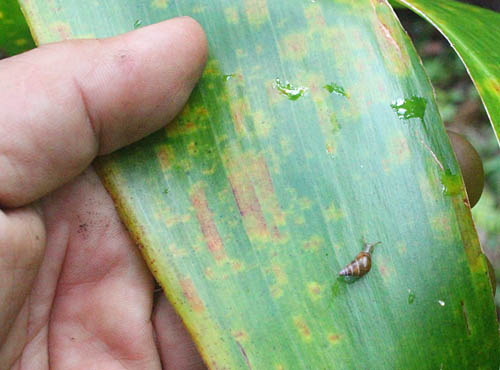 The shells were between a quarter and half inch long with stripes that spiraled up to the apex of the shell. 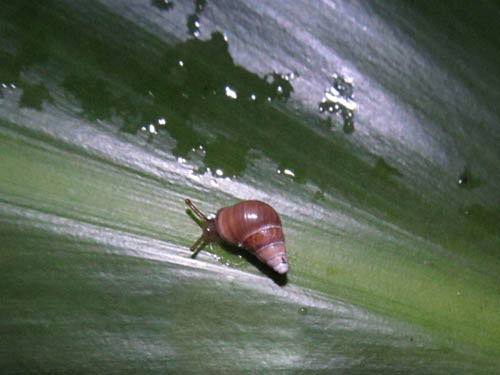 There was considerable variation in the color and markings on the shells.  Some were almost entirely brown in color while others were white with stripes. 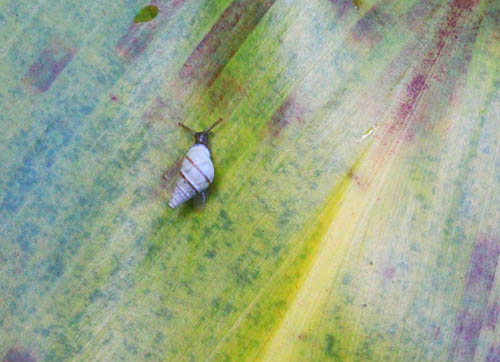 When I asked snail expert Daniel Chung to identify what I believed to be endemic Auriculella snails, he confirmed that they were Auriculella uniplicata.

Time passed quickly as we searched for tree snails and soon it was time to leave.  As I made my way back out the way we had come, I reflected on the great time we had hiking through the narrow stream gorge, recounting the fascinating history of the valley, and finding cute little damselflies and tree snails found no where else in the world.  What a great place to visit!

Olowalu Town, By Maui for Maui