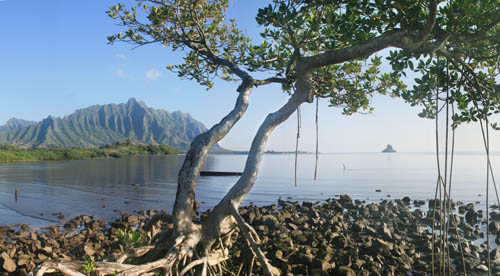 I joined the Hawaiian Trail and Mountain Club (HTMC) for a Saturday hike around Mo`o Kapu O Haloa — the massive ridge connected to Ohulehule that descends from the Ko`olau Mountains and divides the windward districts of Koolaupoko and Koolauloa.

The fluted cliffs of Mo`o Kapu O Haloa provide a dramatic backdrop over the northern end of Kane`ohe Bay and the islet of Mokoli`i (Chinaman’s Hat).  According to Hawaiian tradition, when Hi`iaka (Pele’s sister) travelled from Hawaii Island to Kauai, a mo`o (lizzard-dragon water spirit) challenged her on O`ahu.  During the fierce battle Hi`iaka slayed the mo’o where its body became the lowlands of Kualoa its tail the tiny offshore island of Mokoli`i.

The windward coast was obscured in vog as I took this photo of Mo`o Kapu O Haloa from the shores of Kane`ohe Bay.  Our 8-mile hike for the day would climb over the low point in the ridge and take us on a complete circuit of the mountain through three ahupua`a — Kualoa, Hakipu`u and Ka`a`awa.  The peak at the summit, known as Kanehoalani, is extremely knife-edged, crumbly, and nearly-impossible to climb.  HTMC legend, Dick Davis (1920 – 2004) is the only club member to have conquered Kanehoalani. 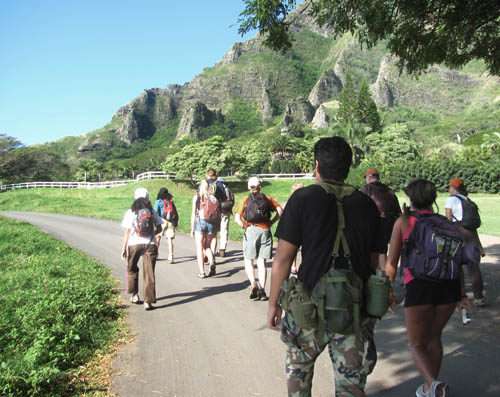 Pushing off from the picnic tables behind the main buildings at Kualoa Ranch, John Hall — our leader for the hike — lead us on the circuit.  As we skirted the base of the ridge, I traced the outline of the ridge Dick Davis is rumored to have scaled and marvelled how he conquered the summit.  There are several near vertical rock faces. 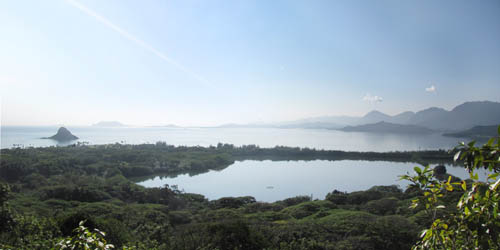 After gaining some elevation, turning the corner, and making our way to a lookout point, we had magnificent views of Mokoli`i Fishpond,which according to tradition was built by the legendary menehune in a single night.  The fishpond is even more unique because it is one of the few fishponds in continuous cultivation since ancient times.  Far off in the distance we could just barely see Mokapu Peninsula — the southern boundary of Kane`ohe Bay — through the vog. 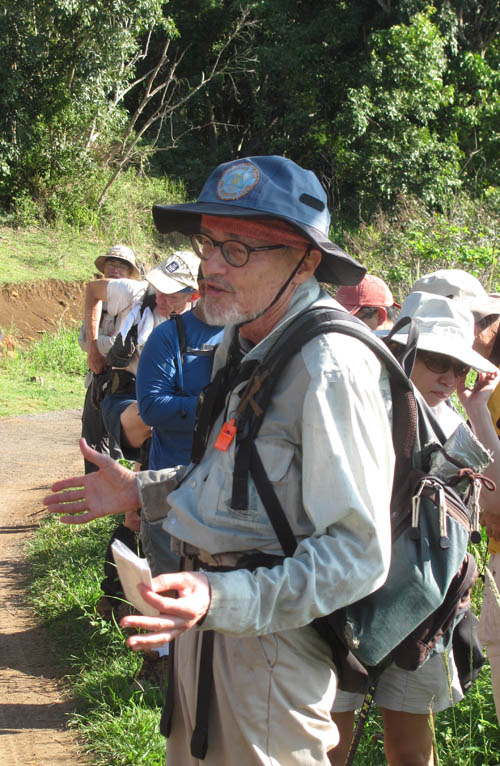 The inimitable John Hall, Emeritus Professor of Microbiology, knew so much about the natural and cultural history of the area, that we made sure to stay close by to learn from him.  We learned that “Mo`o Kapu O Haloa” means “the sacred lands of Haloa” and that Kualoa was a place of refuge where those who violated the strictest kapu could be spared from death.  We also learned that Kahekili — the King of Maui — invaded and conquered O`ahu over a dispute involving Kualoa. 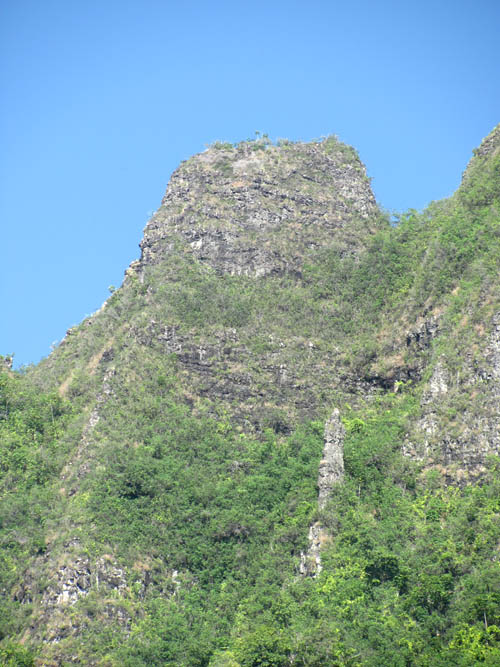 John pointed out a distinctive rock formation about 100 feet high situated against the ridge and told us an interesting story.  As a boy, Nanahoa was kept at Kualoa away from people because of his animal nature.  When he grew up and saw a naked woman for the first time in the moon light, he was solidified into this phallic rock which bears his name — Nanahoa. 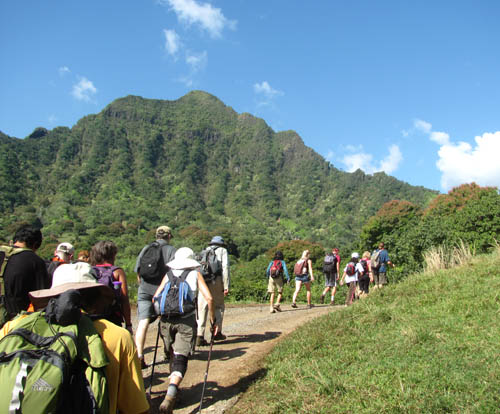 Continuting around the bend, we dropped down into Hakipuu Valley where the peak of Ohulehule towered high above us.  We then ascended a dirt road and took a trail that climbed up to the saddle between Hakipu`u and Ka`a`awa. 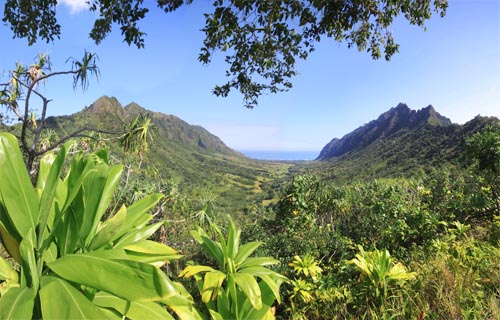 The saddle provided a commanding view of Ka`a`awa Valley, The cool thing about Ka`a`awa is that it is flanked by the most difficult peaks to climb on Oahu — Kanehoalani to the south (right), true Manamana to the north (left), and Ohulehule to the east (behind).  The vegetation on the saddle is very different from the rest of the ranch.  Cattle are not allowed here, so native plants like ohi`a lehua (Metrosideros polymorpha) and hala (Pandanus tectorius) still survive. 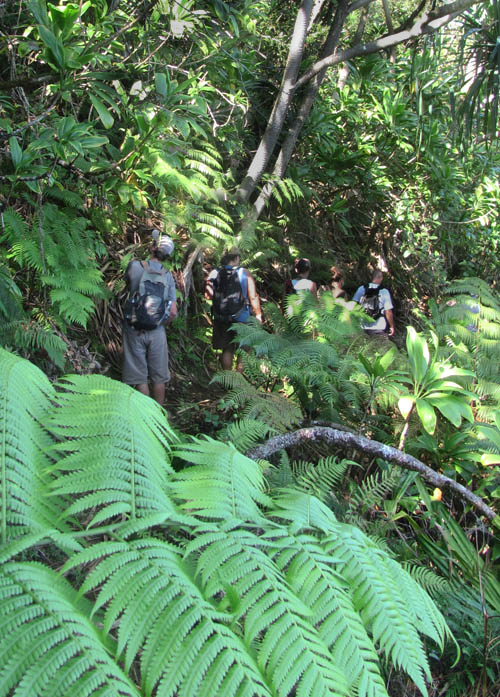 After having lunch and enjoying the magnificent views from the saddle we dropped down a trail into the back of Ka`a`awa Valley where we passed hapu`u ferns (Cibotium glauca) and other native plants on the trail. 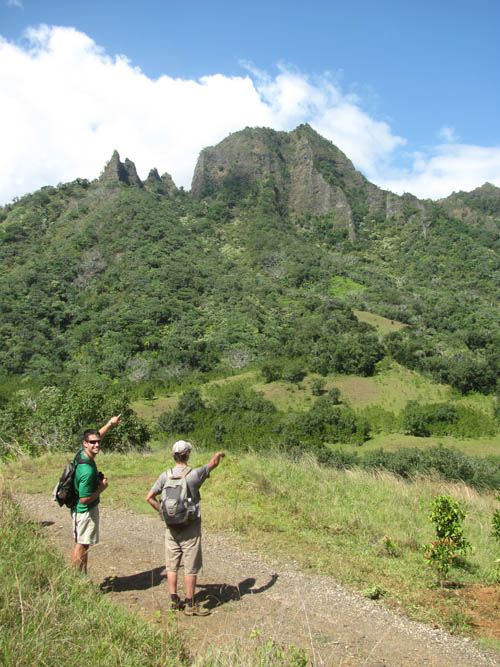 While making our way down dirt roads in Ka`a`awa Valley, Pete Clines (on left) pointed out to Nikolaj Nordkvist (on right) the route he attempted to scale true Manamana, the distinctively shaped peak on Manamana Ridge. Despite several attempts by some of the most capable and fearless climbers in the club, the steep, knife-edged, crumbly peak has yet to be conquered. 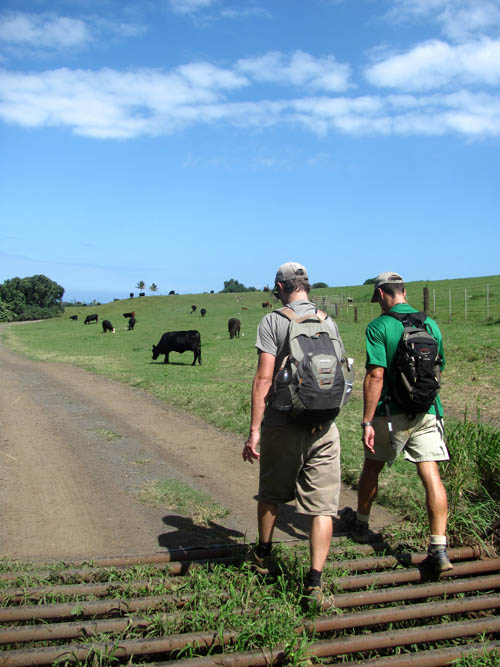 After making our way past a stream and a recreated Hawaiian villiage, we crossed several cattle grates that divide the valley into smaller pastures where herds of cattle grazed on grass. 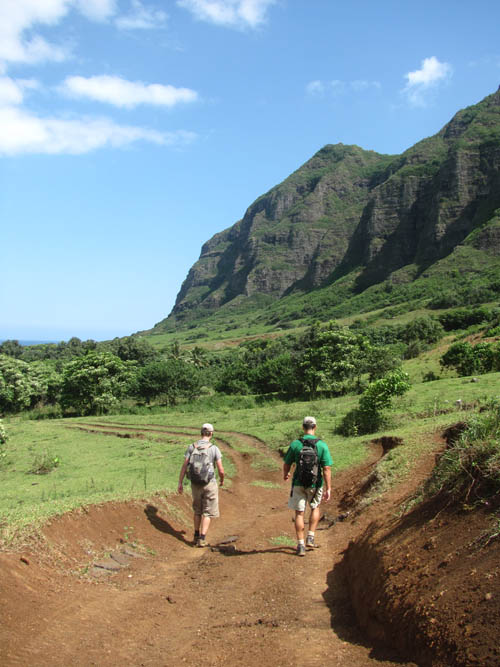 Our goal was to make our way to an old World War II bunker built into mountains at the base of the cliffs overlooking the coastline.  It is rumored that the entrance to the subterranean world of Pohukaina lies hidden near the bunker.  According to Hawaiian tradition, the massive underground cavern centered under Konahuanui exists beneath Oahu with passages that emerge at Kualoa, Manoa, Moanalua, Kalihi, Ewa, and Kahuku. 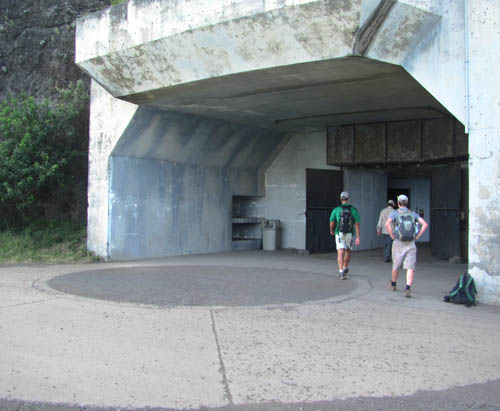 The bunker was part of a series of fortifications on the windward coast and is about 40 feet wide, 20 feet high, and extends well over a hundred feet into the mountain.  The bunker is now a mini-museum that documents the history of Kualoa Ranch since WWII. 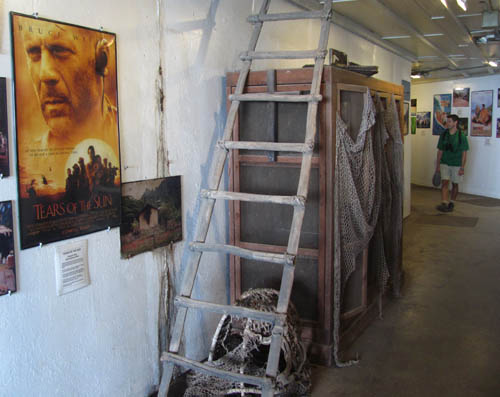 Kualoa Ranch is a favorite location for Hollywood productions.  Posters and memorabilia from a host of movies — Jurasic Park, Pearl Harbor, Windtalkers, etc. — and television shows — Lost, Fantasy Island, Byrds of Paradise, etc. — filmed at Kualoa, hang on the wall. 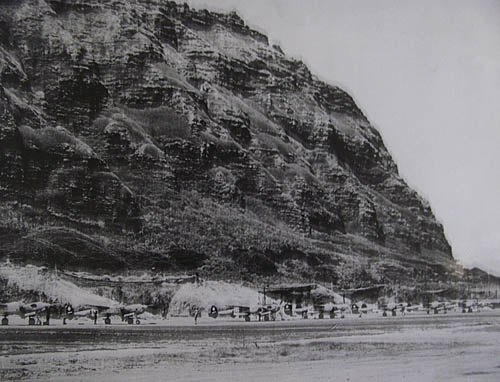 The bunker also had old photos and memorabilia from World War II that document an auxilliary airstrip that was built at Kualoa as part of the defenses protecting Oahu from invasion. 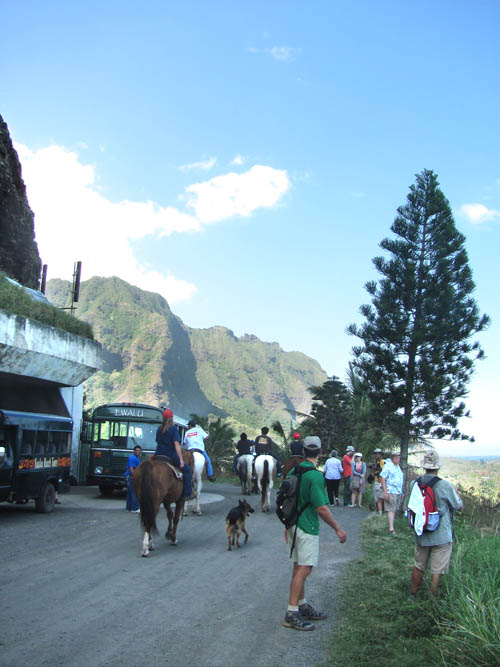 Just as we completed our tour of the underground bunker, a host of other visitors — some on horseback, others on ATVs, and still more on buses, converged on the mini-museum.  So we pushed-off, rounded the ridge, and continued on to complete the circuit. 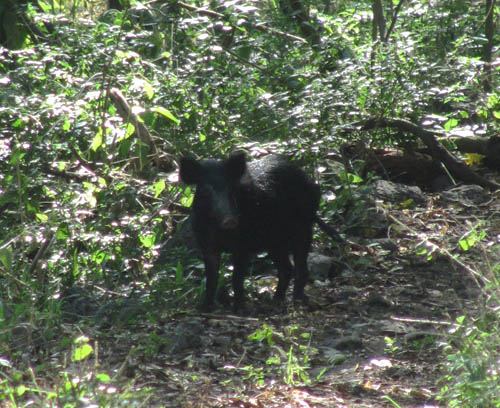 While making our way over a series of parallel interconnected dirt roads, we were surprised to come across a pua`a (pig), which was oblivious to our presence.  Given how indifferent it was, it must be very accustomed to the presence of humans. 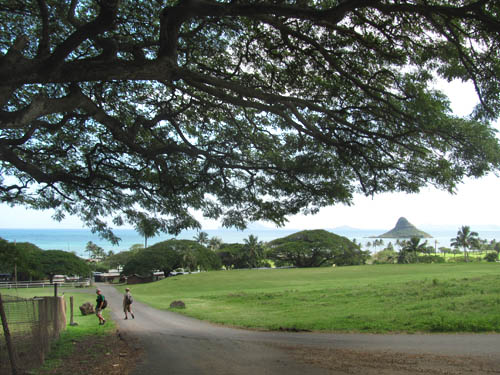 When we reached the large monkeypod trees and picnic tables where we started, I reflected on what great time we had at Kualoa Ranch.  We enjoyed magnificent views of Kane`ohe Bay, learned fascinating stories about the area from John Hall, and examined the steep routes to the most extreme climbs on the island.  What a great place to visit!

WARNING:  The climbs to Kanehoalani and true Manamana are extremely dangerous and should only be attempted by trained mountaineers with the proper climbing equipment.  The peaks are unforgiving and any slip is likely to result in serious injury if not death.