Misumenops Spiders in the Hawaiian Islands 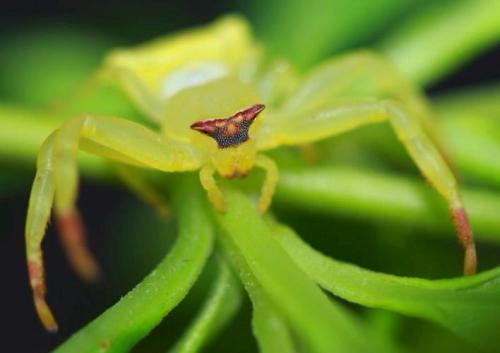 We found a couple of Misumenops spiders endemic to the Hawaiian Islands.

For the past several months, Francis Joy — better known as Jay — my spidering buddy  — and I have been looking for endemic Hawaiian spiders in remote parts of the island.

Jay found a chartreuse colored spider that was perfectly camouflaged in the vegetation.  The spider was a little more than half an inch long with a stocky body and thick limbs that gave it a strong and formidable appearance. 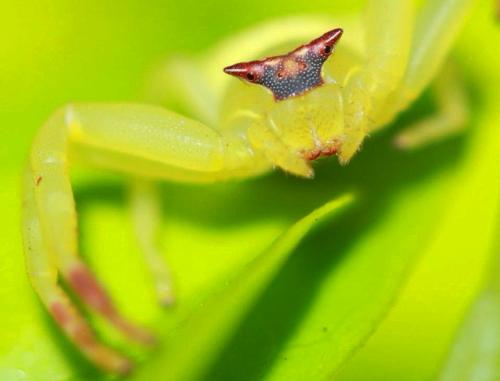 The most distinctive feature of the spider was a red trapezoidal shield on the front of its head upon where its eyes are situated. 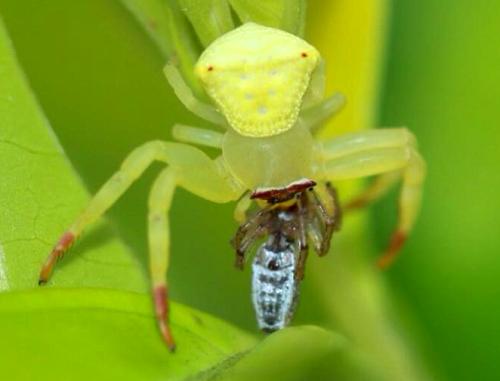 Imagine our excitement when the spider ambushed an unsuspecting spider and took off with its meal! 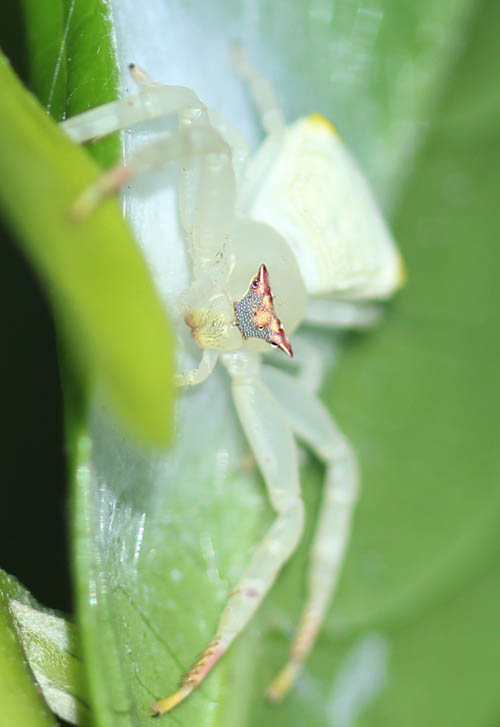 Just last week, Jay found another spider — but this one was white.  The spider was about three-quarters of an inch long from leg to leg — large compared to other endemic spiders. 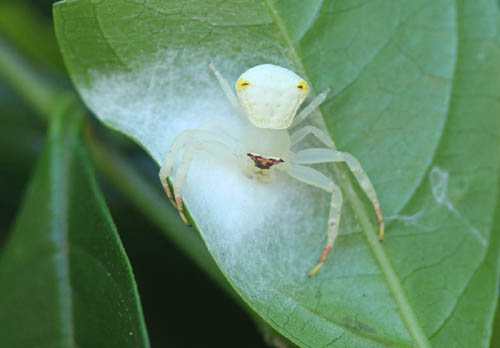 The spider was guarding its nest on the back side of a leaf.  Its brood of eggs were wrapped in silken threads. 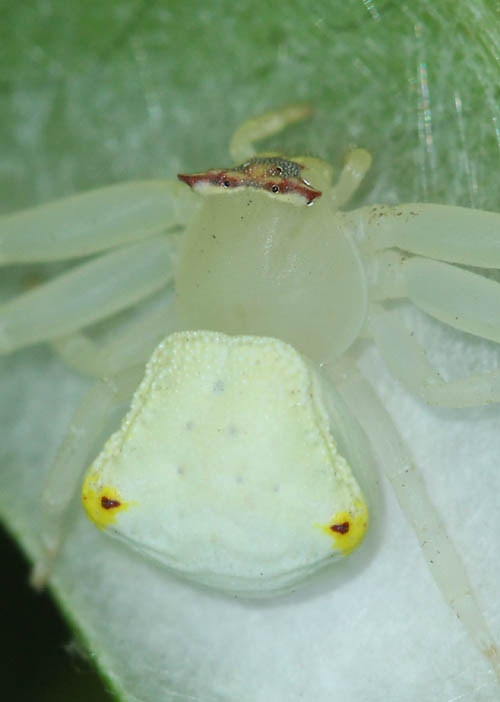 The red, yellow, and gray trapezoidal shield on the font of its head is always fascinating to look at and examine. 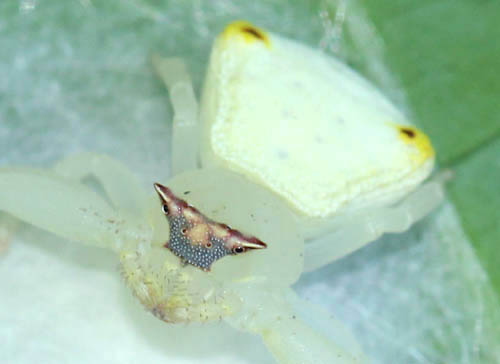 The colorful shield is presumably where its eight eyes are situated but I can only make out three pairs of eyes. 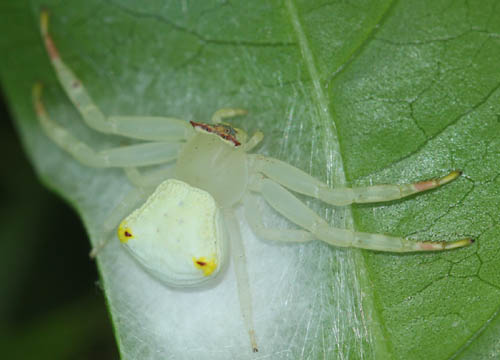 When I posted video of the spider to the Hawaiian Entomological Society, Sam Gon III identified this as a Misumenops spider, an endemic crab spider in the family Thomisidae. 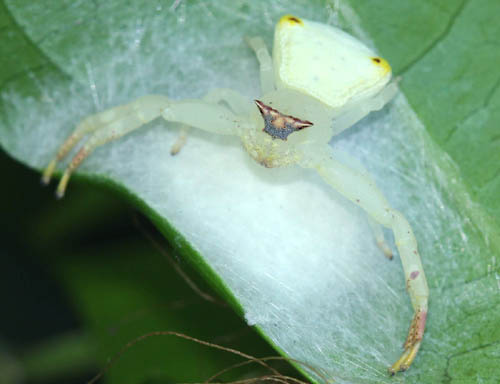 There are 17 known species of Misumenops species endemic to the Hawaiian Islands, most of which are found in mesic to dry forests. 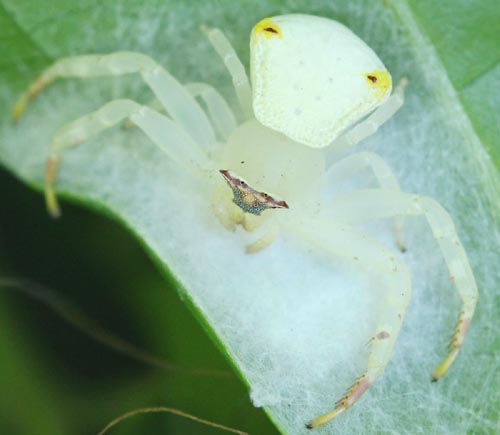 Misumenops are commonly known as flower spiders because they mimic the color of flowers on which they sit and ambush pollinating insects. 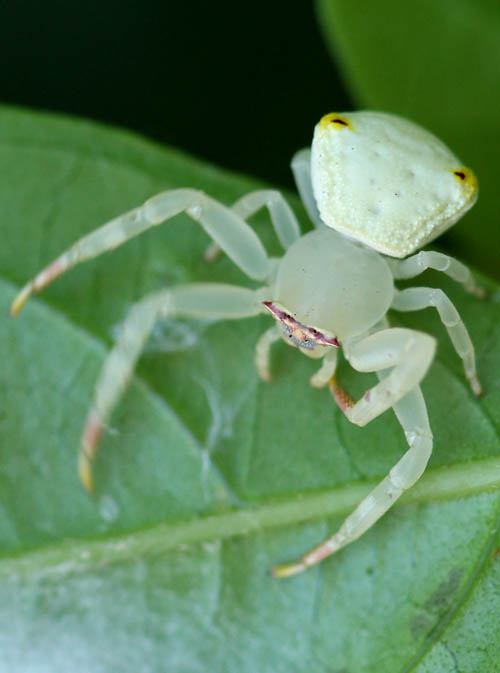 Genetic data suggest that the Hawaiian thomisids are descendants of flower spiders who found their way to the Hawaiians Islands by floating in the air stream on long threads of silk. 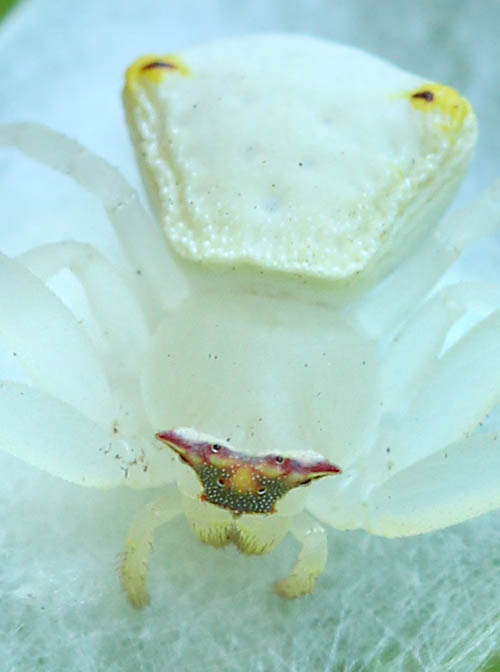 Misumenops spiders have moved on from mimicking flowers to other substrates in Hawaii. 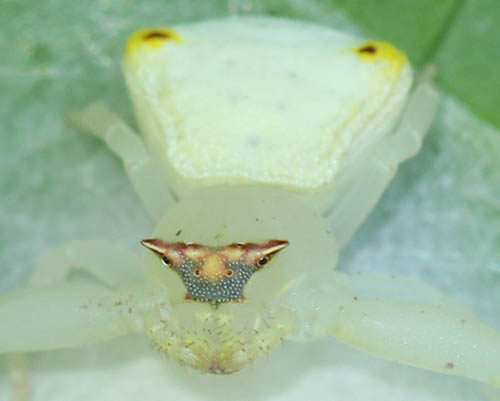 Misumenops Spiders occupy different substrates in the ecosystem.  The green and brown speckled Misumenops editus, endemic to the summit of Mt. Kaala, Oahu, is perfectly camouflaged against moss. M. aridus and M. nigrofrenatus are well hidden on white lichen.

The State of Hawaii believes there at least 132 spiders endemic to the Hawaiian Islands.  So many more to find!