Manana Trail Clearing in the Rain 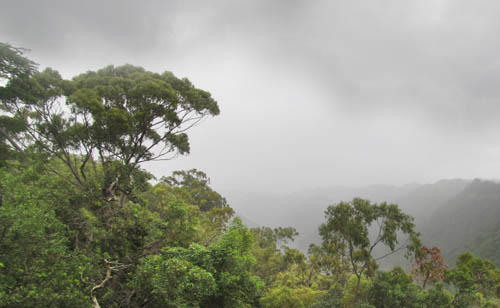 I joined the trail clearing crew of the Hawaiian Trail and Mountain Club (HTMC) to clear the Manana Trail above Pacific Palisades that leads to the Koʻolau Summit Ridge.

It was a dark, cloudy and rainy morning when I reached the end of Komo Mai Drive above Pearl City.  Given how little rain we’ve received so far during this wet season, I was pleased.  The landscape needed to be drenched.

After putting on my footwear and preparing my gear, I pushed-off on the 6-mile Manana Trail which follows the undulating outline of the ridge as it climbs up and down to the Koʻolau Summit Ridge and makes for a tough 12-mile round trip.

When I reached a grove of eucalyptus trees, rain began to fall again — a pattern that would repeat itself multiple times during the day — so I waited briefly for the rain to subside before continuing to where pine trees have been planted on the trail. 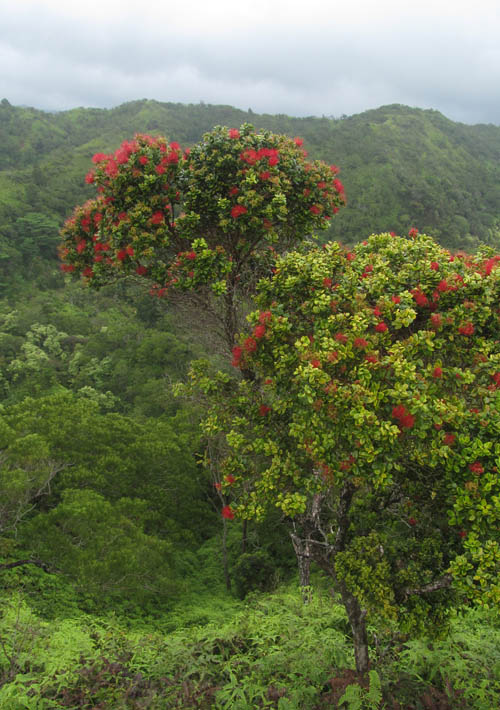 Since it was cold, I liked hiking uphill from one hill to the next to generate body heat.  It did not take long for the first 3 miles to fly by where I saw many ʻōhiʻa lehua trees (Metrosideros polymorpha) in bloom with bright red flowers. 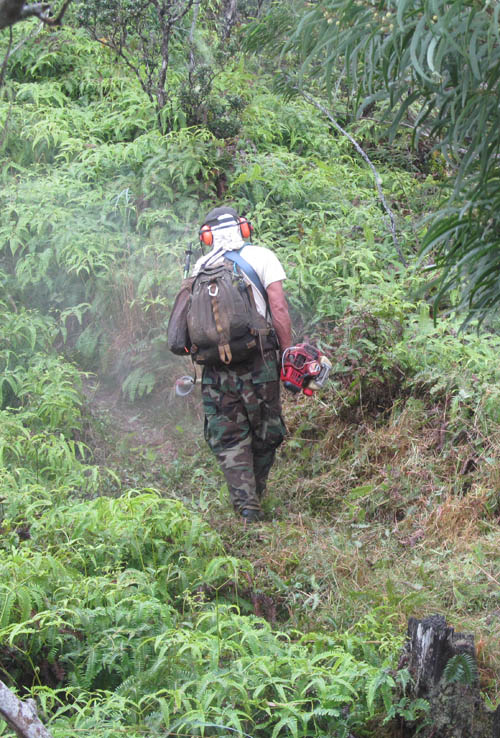 The sound of a weed whacker grew louder as I made my way up the trail.  Thomas Yoza pushed-off well before the rest of the crew and was busy cutting back ʻuluhe ferns that encroached the trail.  Since I rarely have an opportunity to photograph the weed whackers, I stalked Thomas silently from behind for quite some time and was able to get some good photos and video before he detected my presence. 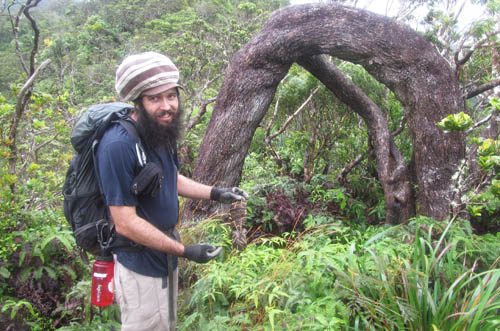 August Smith caught up to me and we continued on to a where koa trees (Acacia koa) dominate the landscape.  August found a lost sole — the remnants of a hiking shoe — near the base of a koa tree that formed a natural arch along side the trail.   We joked that the arch might be a portal leading to the realm of “lost souls”. 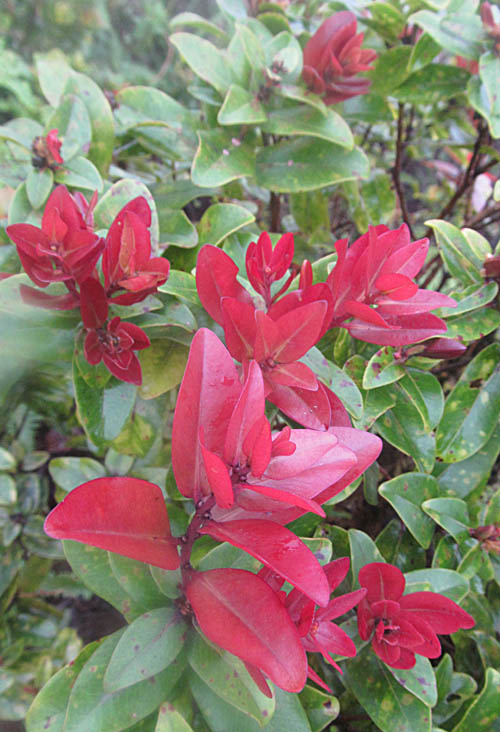 While climbing up the rope section I saw the vibrant red-pink leaves of liko lehua which added much color to an otherwise dreary day. 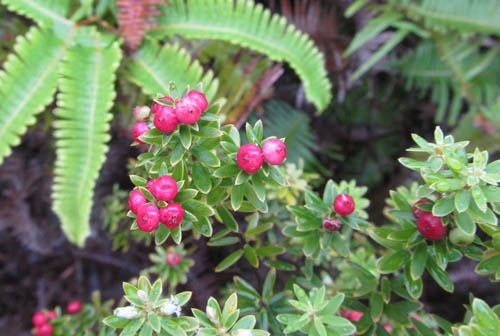 We also saw a number of pukiʻawe shrubs (Styphelia tameiameia) with bright red fruits tucked in with ʻuluhe ferns along the trail. 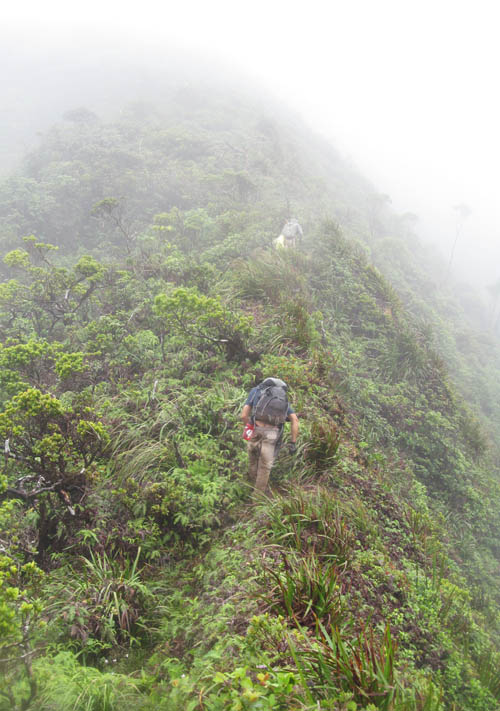 August and I hiked up to where ʻIliahi Ridge converges with Manana Ridge — roughly 2/3rds of the way up to the summit before taking our machetes.  Our plan was to clear the last 1/3rd of the trail to the summit. 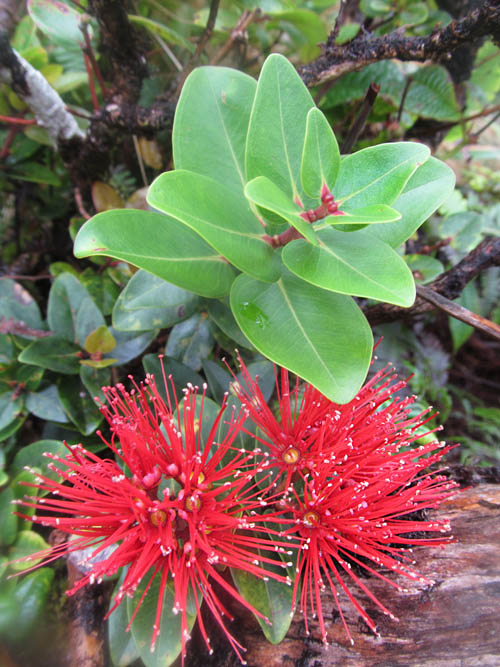 When I stumbled on an ʻōhiʻa tree whose leaves formed a geometric pattern — a rosette — over a cluster of vibrant red flowers I stopped briefly to admire the photogenic sight. 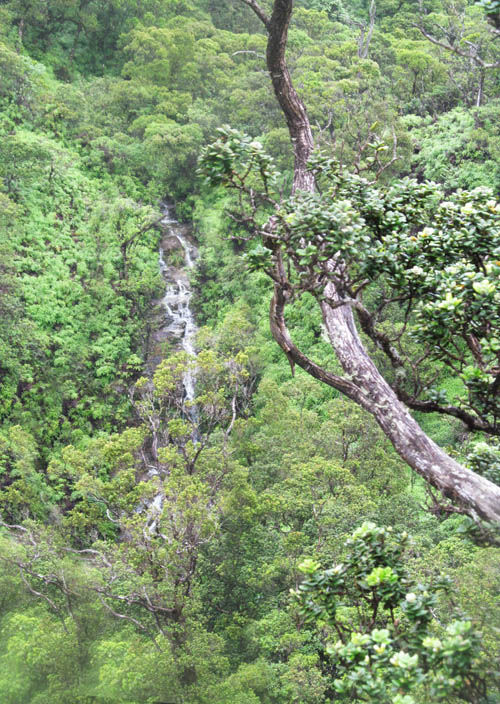 With rain clouds dumping their moisture on us multiple times during the day, we saw a number of ephemeral waterfalls as we made our way up the trail in the clouds. 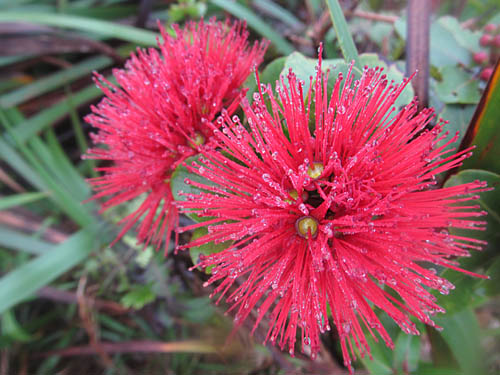 Dew drops from passing clouds condensed on the stamens and pistils of lehua flowers. 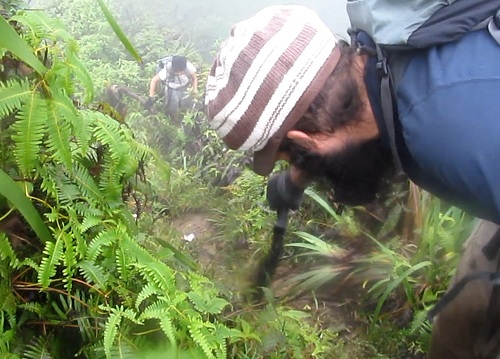 Due to the reduced rainfall this year, the ʻuluhe ferns had not grown back as vigorously on the upper portions of the ridge and the trail was already in decent shape.  But we hacked at the ferns anyway to proactively chop back the coming year’s growth. 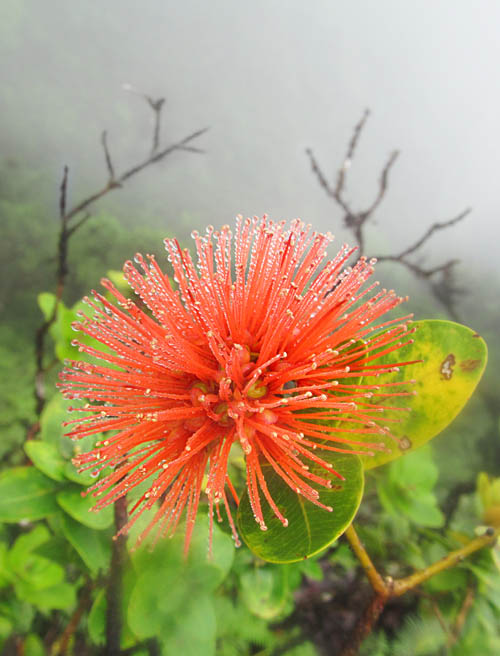 When I stumbled on orange lehua blossoms where water droplets had condensed from the clouds, I was thrilled to photograph the tiny droplets of dew which sparkled in the light. 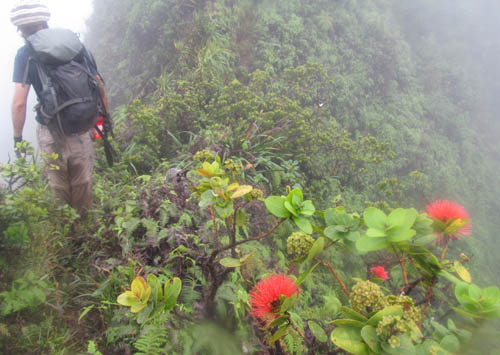 The clouds became thicker as we neared the summit and soon we were hiking in a thick mist. 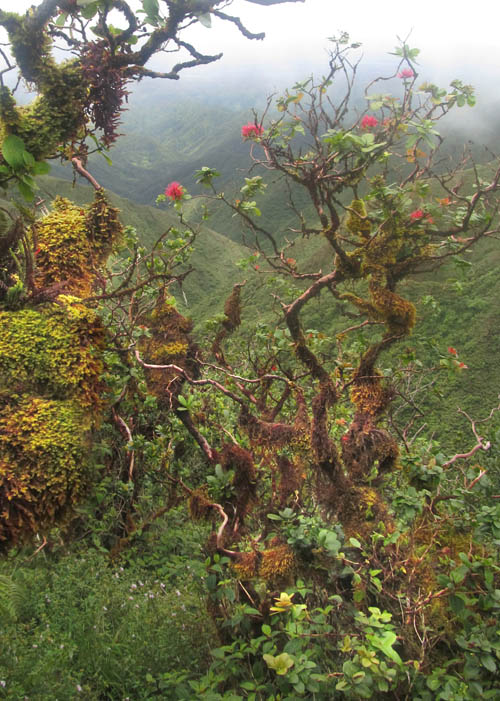 Clouds socked in the summit so we had no view of windward Oʻahu from the 2,600 foot summit.  So my attention was focused on the ʻōhiʻa trees at the summit which are covered with moss.  It was cold at the summit and we did not linger for long after eating lunch and turned around to return the way we had come. 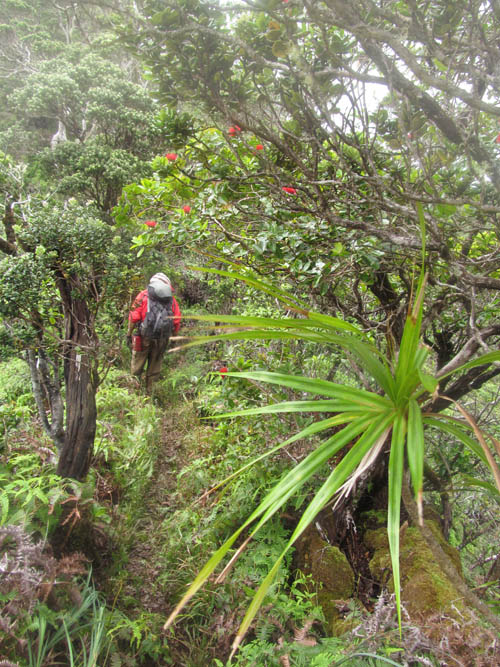 The rain fell several times on the return leg of our hike but it was still pleasant to hike in the native landscape dominated by ʻieʻie vines, ʻōhiʻa trees, and ʻuluhe ferns. 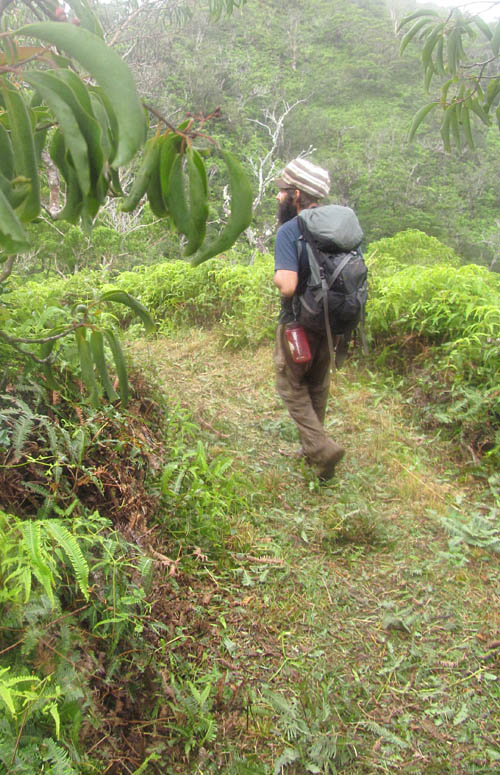 We were pleased when we descended to the middle and lower portions of the trail.  The weed whacking crew did a bang-up job re-establishing a 4 foot wide trail.

While making my way back down the Manana Trail to my car I could not help but reflect on the great time we had hiking in the rain, seeing lehua flowers covered with dew, and keeping the trail wide open.  What a great hike!