Mamalahoa Trail on the Kona Coast 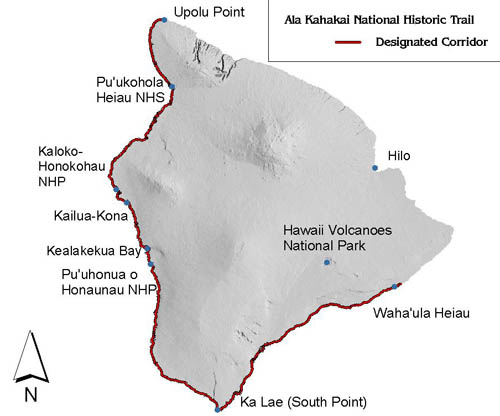 We hiked sections of the Mamalahoa or King’s Trail to see unspoiled beaches and anchialine ponds along on the Kona Coast of the Big Island.

My hiking buddies for this part of the trip were Pete Morton, who lives on the Big Island, and Chase Norton, who flew in from Oʻahu the night before.   Our original plan was to backpack to Kaʻaha and Halape but since the water situation was sketchy and my left knee still hurt, we abandoned the plan in favor of hiking portions of the Mamalahoa Trail at Kiholo Bay and Makalawena.

The Mamalahoa Trail was built prior to Western contact and was extended, repaired, and improved multiple times by the aliʻi ʻaimoku or king of the island — hence its name the King’s Trail.  In 2000, the coastal trail was designated a national historic trail — the Ala Kahakai National Historic Trail — to preserve and protect traditional Native Hawaiian culture.  The 175 mile trail starts at Upolu Point in North Kohala and ends in Puna within Hawaiʻi Volcanoes National Park.  The trail is not continuous — many sections have been covered by lava flows, reclaimed by the sea, or developed into roads. 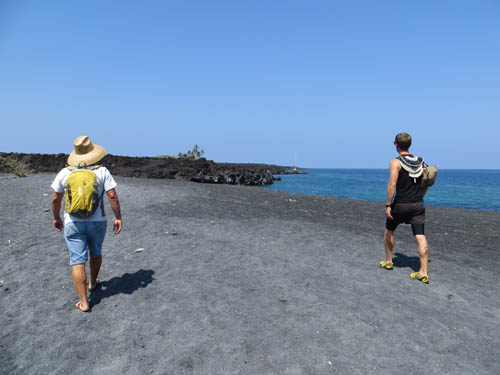 Starting from the 2 mile expanse of gray sand (mixture of white and black sand) at Kiholo Bay we hiked south and made our way from one anchialine pool to the next.  This section of the Mamalohoa Trail is known the Kiholo-Puako Trail. 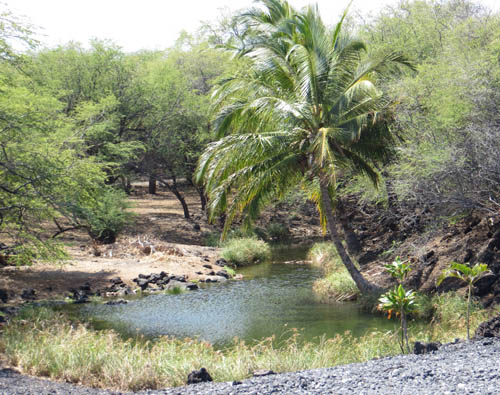 When rain falls on the Kona side of the Big Island, water sinks into the porous lava and travels underground by the force of gravity to the coast.  Since fresh water is less dense than salt water, fresh water floats on top salt water when the ground water reaches the shore and is forced above ground.  The water in these ponds — called anchialine pools — are mostly fresh but has some some salt water.  Water levels often fluctuate with the tide due to their underground connection with the ocean. 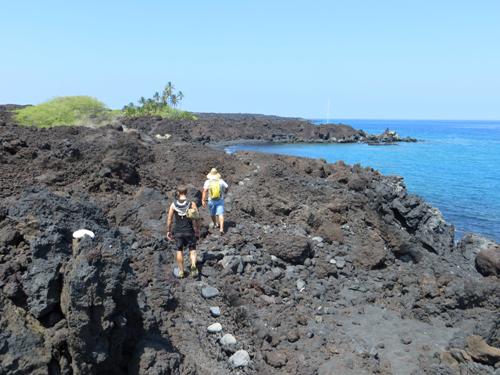 The Mamaloahoa Trail crosses over sharp ʻaʻa lava flows and are where the trail builders did their best work.  In order to allow travelers to walk barefoot over jagged ʻaʻa, coarse gravel-like rocks were carried in from miles away to line the trail bed and paving stones were installed a foot step apart.  White pieces of coral mark the trail which reflect the light and enable travelers to find their way in the waning hours of daylight. 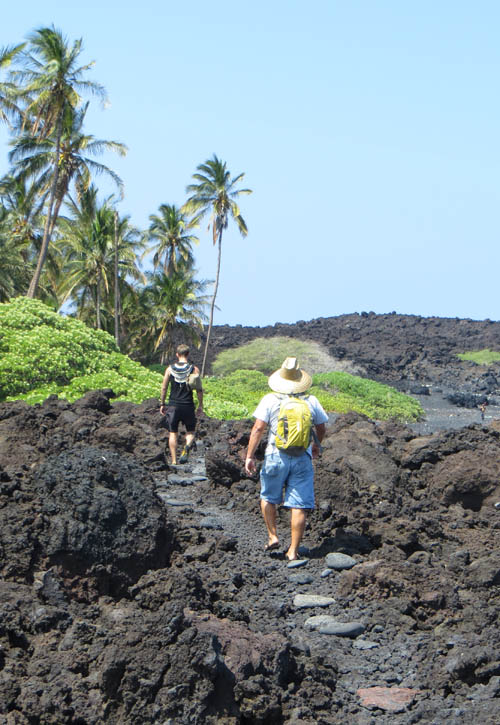 Our plan was to visit Luahinewai — an anchialine pool on the southern end of Kihoho Bay.   When Kamehameha the Great completed his heiau Puʻukohola in 1791, he needed a human sacrifice to dedicate the temple to the war god Kūkaʻilimoku .  Kamehameha’s lured Keōua — his rival and cousin — to the heiau under the pretense of a peace treaty.  When Keōua arrived he was captured, killed, and sacrificed, but it was Kamehameha who got a rude surprise.  Keōua knew he would be sacrificed so cut off his genitals before he was captured to defile his body as a sacrifice. 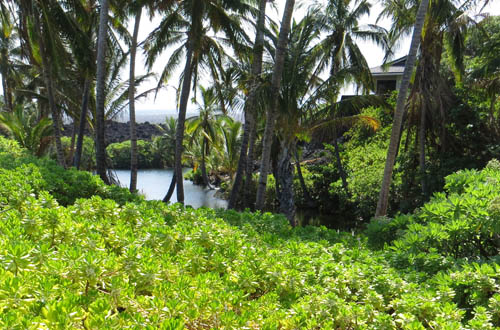 Keōua is said to have mutilated himself at the anchialine pool at Luahinewai prior to going to Puʻukohola.  Today, the pond is privately owned and part of a multi-million dollar home built over the pool. 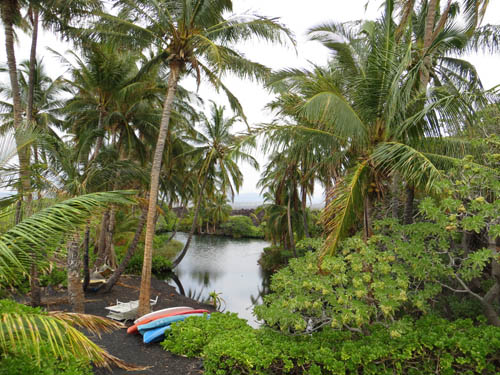 After admiring the pond from a distance — I could not get close enough to determine whether the pond was pristine or invasive fish were introduced — we returned to our car and drove to Kekaha Kai State Park just north of the Kona airport to hike another section of the Mamalahoa Trail. 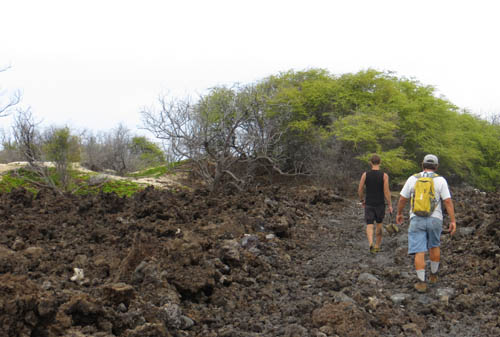 After driving the bumpy road to Kekaha Kai State Park we embarked on the next phase of our hike to Mahaiʻula and Makalawena. 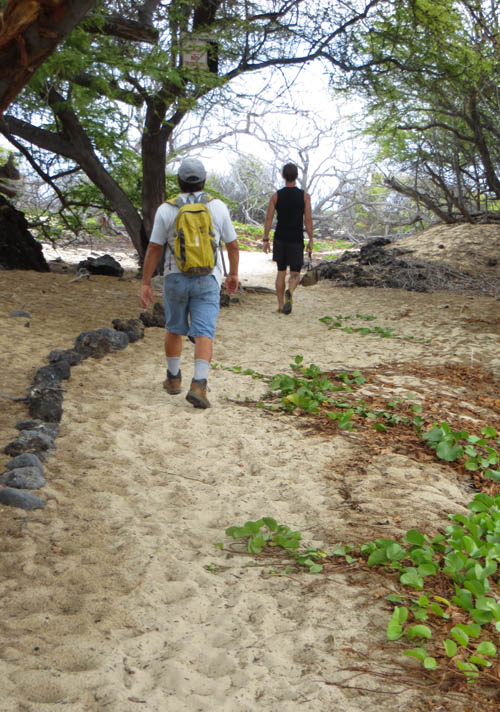 After crossing the ʻaʻa lava flow, we reached Mahaiʻula and then Makalawena, renown for their beautiful white sand beaches and crystal clear waters. 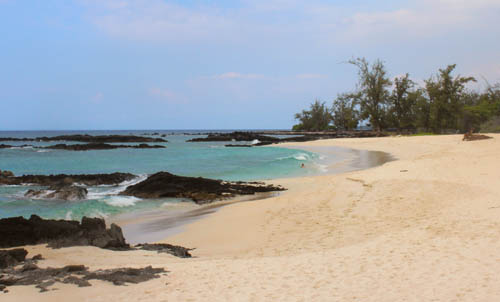 The white sand beaches were nearly deserted and we almost had the place to ourselves.

While making my way from one sandy cove to the next, we saw indigenous pohuʻehuʻe or beach mornging glory (Ipomoea pes-caprae subsp. brasiliensis) crawling over the sand in bloom with purple flowers. 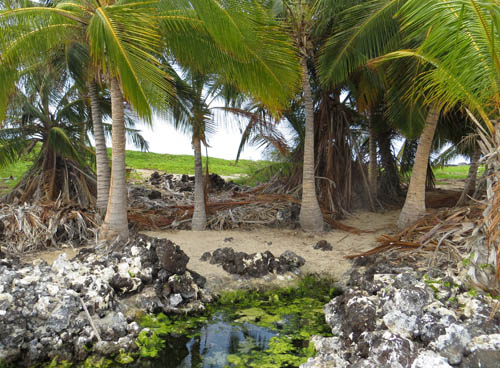 One of the more interesting places to visit are a string of anchialine pools located further inland from the beach.  I ventured from one pool to the next to see what creatures lived in them. 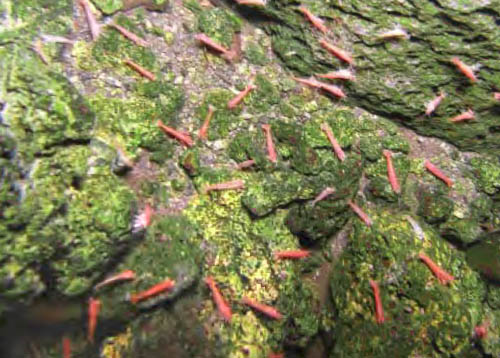 When I peered into one of the more pristine pools I was thrilled to see small red shrimps — ʻopae ʻula (Halocaridina rubra).  These tiny shrimps are about a quarter inch long and are endemic to the Hawaiian Islands. 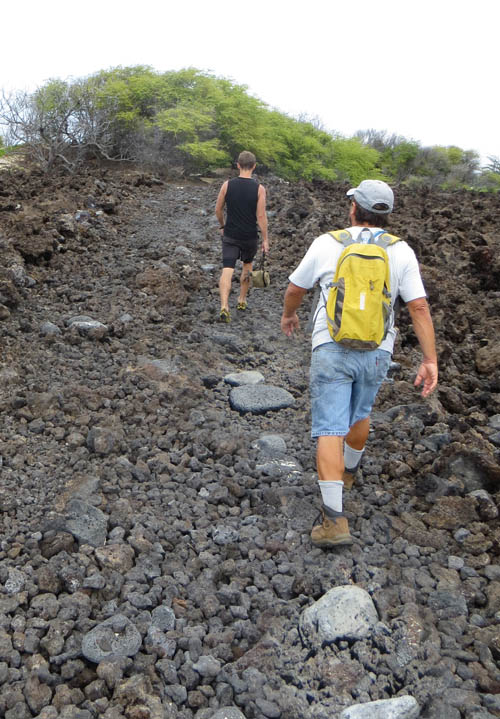 Time past quickly as we enjoyed the unspoiled beaches and anchialine pools at Makalawena and soon it was time to leave.  As we retraced our steps on the King’s Trail to return the way we had come, I reflect on the great effort it took to build and maintain these trails over ʻaʻa lava and the spectacular places where they lead.  What an amazing place!

The King’s Trail by Steve Graves