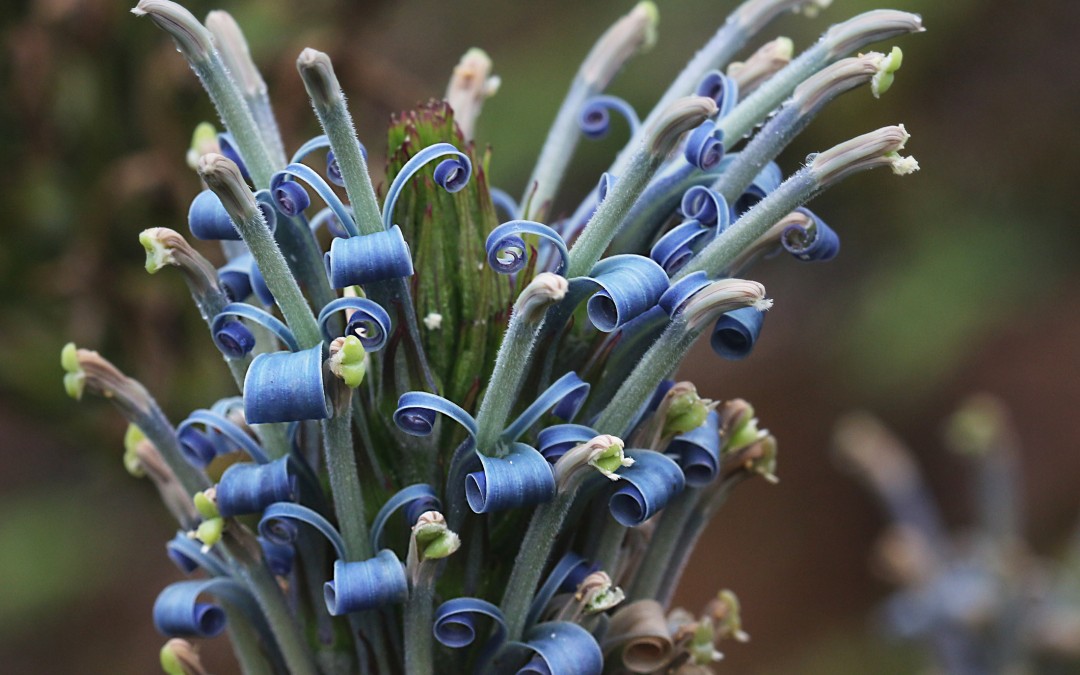 One of the amazing sights found only on Oʻahu are the spectacular flowers of Lobelia oahuensis.

For the past 5 years I have been monitoring a handful of Lobelia oahuensis plants to see when they would bloom.  Imagine my excitement when I saw an impressive 4 foot flower stalk with hundreds of flower buds poised to bloom! 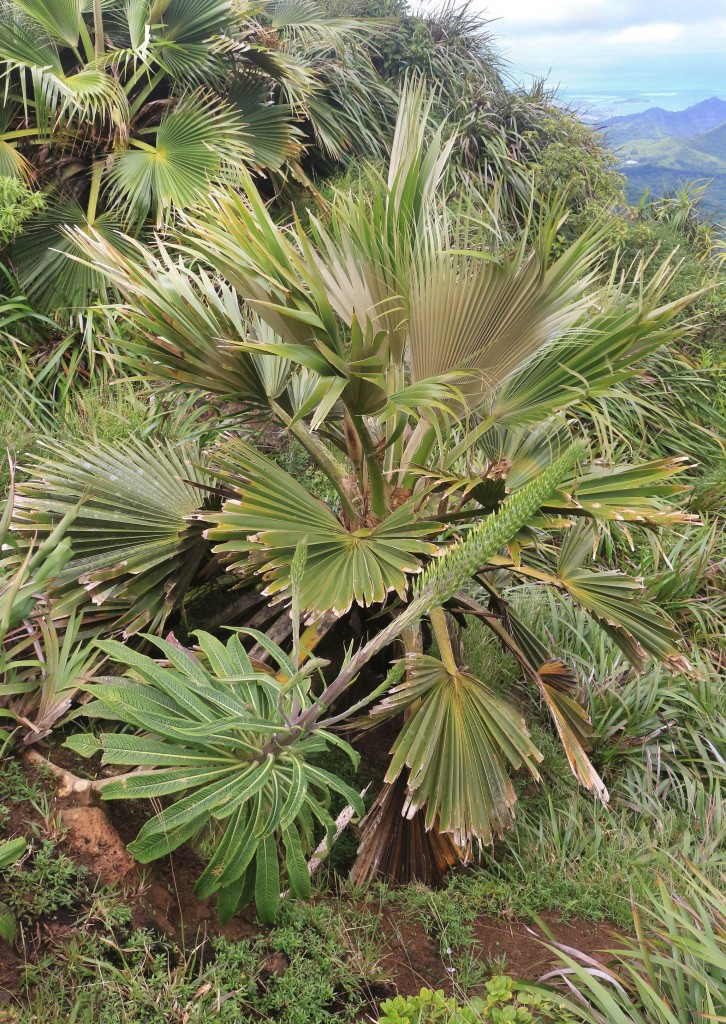 The plant was discovered in 1917 by famous botanist Joseph F. Rock who wrote the monograph on Lobelia in 1919.  The Hawaiian Lobeliad Group includes 126 different species most of which are geographically localized to a single island or to adjacent islands.   As its name implies, Lobelia oahuensis is endemic to Oʻahu.  According to the last US Fish and Wildlife 5 year review there are only an estimated 48 to 68 individuals known in the Koʻolau and Waiʻanae Mountains — a very rare and endangered plant. 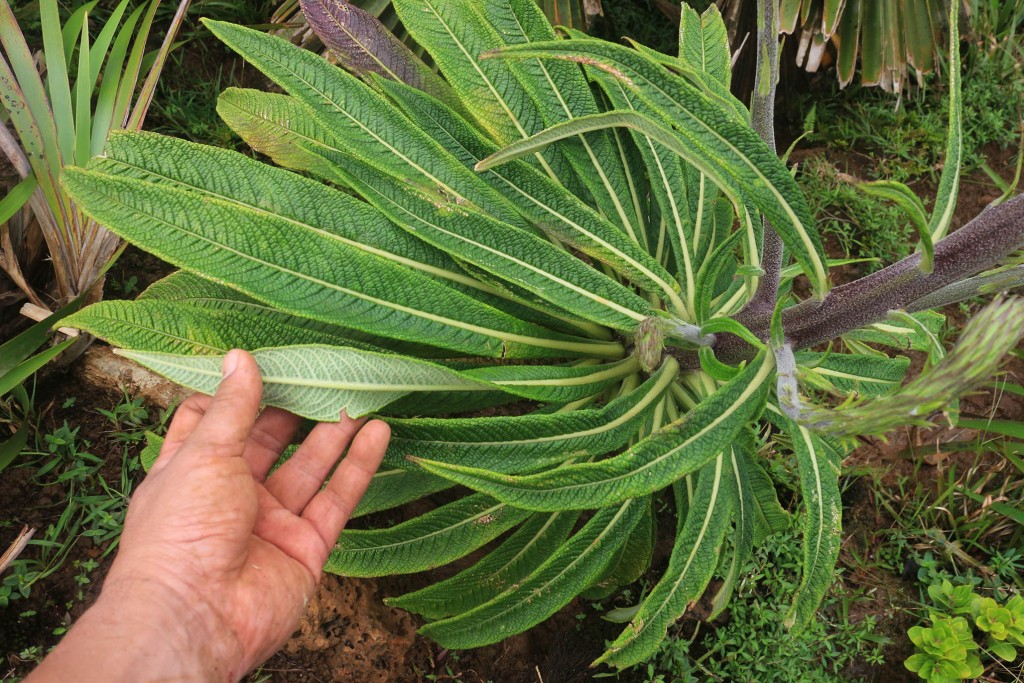 Lobelia oahuensis has long textured leaves that grow in a large dense rosette.  When the long inflorescence — flower stalk — grows out from the center of the rosette, the space between leaves increases and the rosette stretches out.  The leaves are green on the underside with a dense network of veins.  Lobelia hypoleuca — a closely related species with similar flowers  — has leaves that are white on the underside.

When I returned 2 weeks later, I was thrilled to the see dozens of blue flowers!  The stalk appeared to be nearly half-way done with the flowers on the bottom portion of the stalk spent. 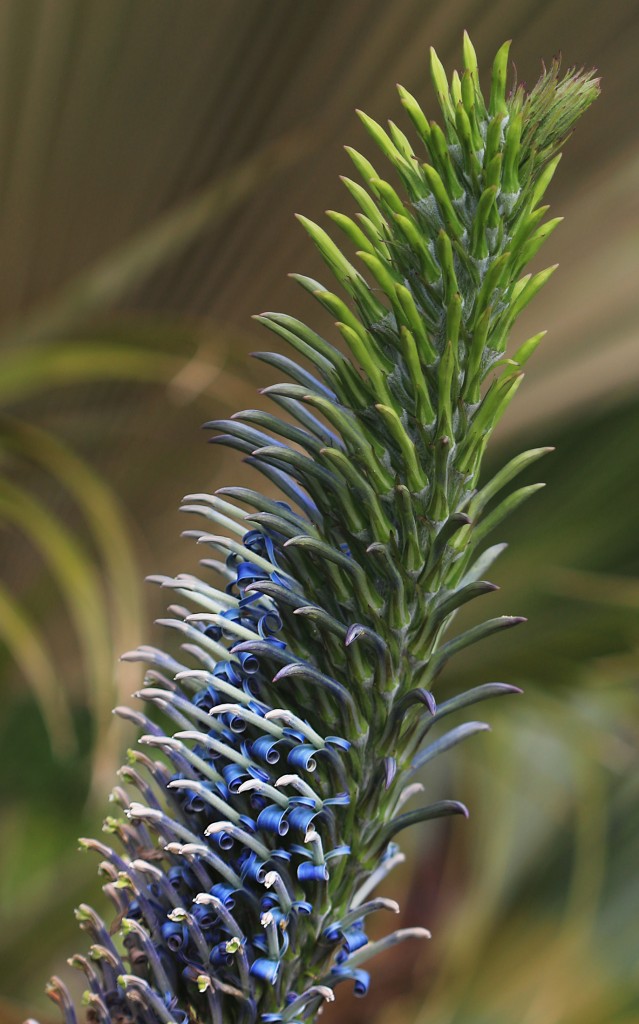 What a sight!  The midsection of the stalk was in full bloom with dozens of cute little blue flowers open!  Unfortunately, strong winds at the summit made macro photography nearly impossible on the flowers.  So I was forced to come back another time when conditions were better. 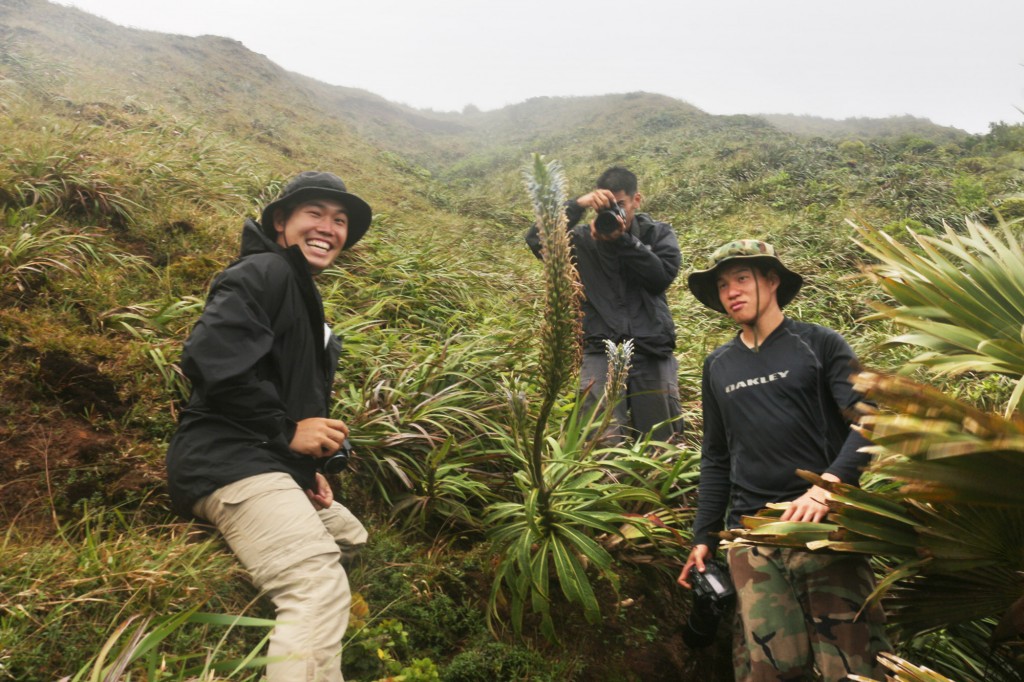 The next week, I returned to the misty summit with the plant paparazzi — Ryan Chang, Francis Joy, and Chris Wong — who went bonkers over the awesome sight!  The main flower stalk had reached its end! 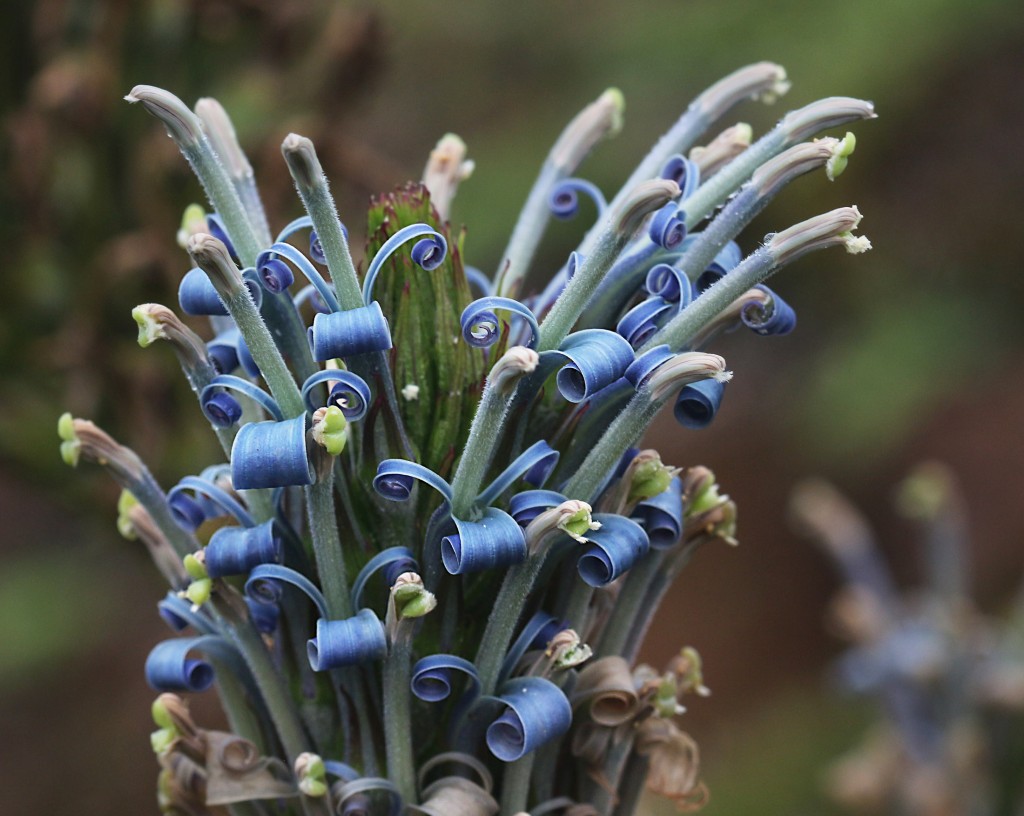 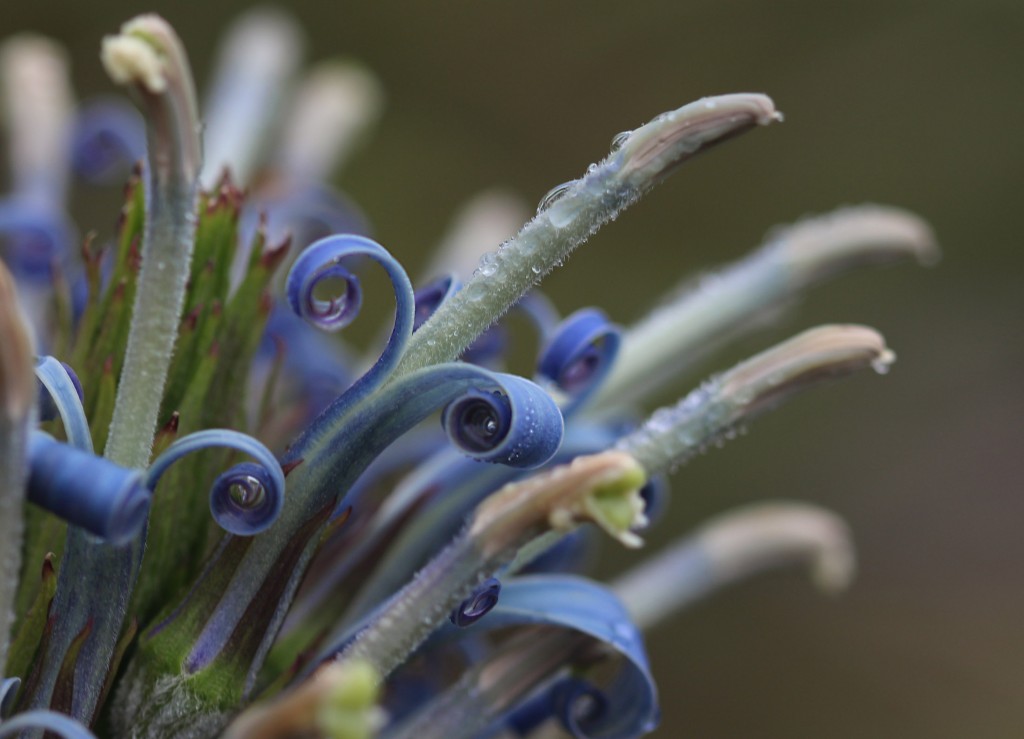 Clouds blew in and condensed on the flowers as droplets of water.  It was cool to see the cute blue flowers up close and admire their irregularly shaped petals that curved backwards. 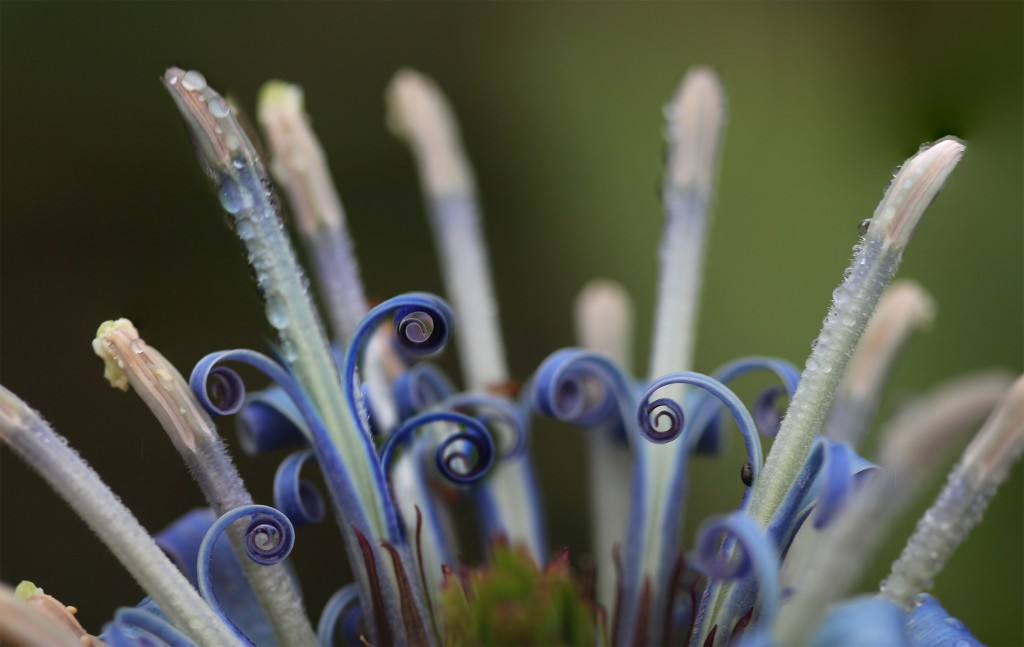 The specific Hawaiian name for Lobelia oahuensis and other species in the Hawaiian Lobeliad Group have been lost.  The Hawaiians who knew the name of the plant died before the name could be passed on the Western botanists.  I hope we don’t lose the plant too.  But with so few plants left the outlook is not rosy.