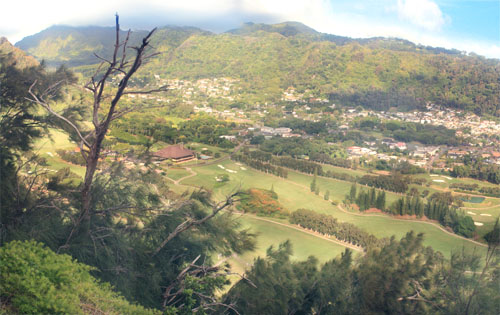 I joined the trail maintenance crew of the Hawaiian Trail and Mountain Club (HTMC) to clear the trail that leads to the summit of Lanihuli on the Koolau Mountains.

Lanihuli means “swirling heavens” in Hawaiian and is the peak on the Koolau Mountains above Kamehameha Schools that straddles the valleys of Nuuanu and Kalihi. At 2,700 feet elevation, Lanihuli also towers over Kaneohe on the Koolaupoko Coast of windward Oahu. Since there are large saddles on either side of Lanihuli, the peak is more conspicuous than Konahuanui, the highest peak on the Koolau Mountains, when viewed from Honolulu and the south shore of Oahu. Lanihuli is also renown for its ‘ahihi flowers, a distinct species of ohia lehua, which is celebrated in a number of songs such as Pua ‘Ahihi.

We started our hike from Na Pueo Park near the top of Alewa Drive using a by-pass trail pioneered by Dick Schmidt that was lost after years of disuse and then rediscovered by Thomas Yoza. Many thanks to Thomas for reopening this lost route to Lanihuli.

The trail drops down from Na Pueo Park and contours along the Nuuanu side of Alewa Ridge providing a bird’s eye view of Oahu Country Club. The trail then climbs to reach the fenceline and then connects with the Kapalama Loop Trail. We were pleased to see that the Kapalama Loop Trail was wide-open with no clearing needed. A big mahalo to Ken Suzuki who toiled for many hours over the course of several weeks to open-up the lower sections of the trail to Lanihuli. 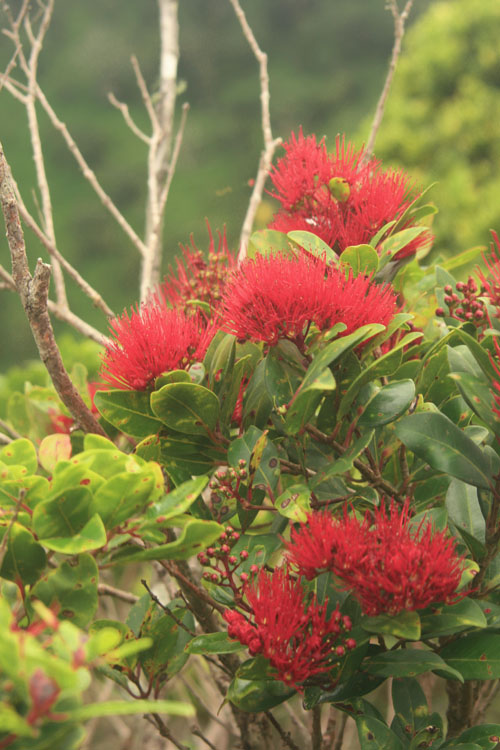 The higher one gets up on the Kapalama Loop Trail, the more native the vegetation becomes. Vibrant red lehua blossoms thrive along the trail and add much color to the landscape. The red lehua flowers above are Metrosideros polymorpha, the most common species of ohia lehua that can be found on all main Hawaiian Islands. 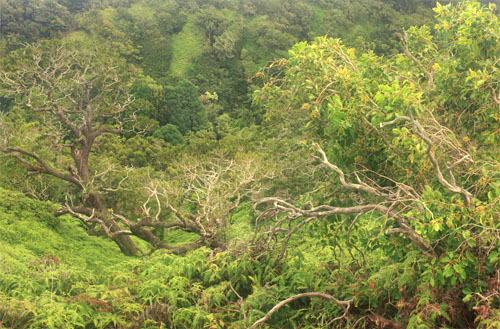 One of the rarer species of ohia lehua — Metrosideros macropus — also grows on the Kapalama Loop Trail. It is on the right side of the above photo but was unfortunately not in bloom. Macropus is endemic only to Oahu and produces yellow blossoms. One of its distinctive features is that is has unusual leafy growths which are the remnants of bud sheaths.

When we reached the top of the Kapalama Loop Trail, we continued on towards the junction with Kamanaiki Trail, which starts in the back of Kalihi Valley. Since the trail was overgrown from this point on, we hacked away through strawberry guava, uluhe and other vegetation that choked the trail with our machetes, sickles, and other tools. In the photo above of the back of Kalihi Valley, Kamanaiki Trail climbs up the ridge and connects with the trail to Lanihuli. 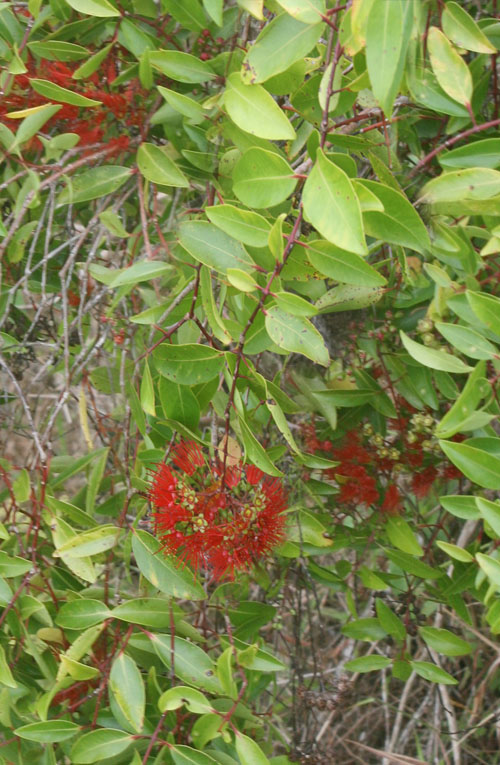 The trail drops down a steep incline to reach a knife-edged section of the ridge covered with ahihi, the species of ohia lehua featured in the song “Pua Ahihi” posted above. Fortunately, a cable helps in the descent and a contour trail was been carved into the ridge which made the otherwise harrowing crossing easy. In the above photo of ahihi (Metrosideros tremuloides) you can see its red petioles (leaf stems), blade-like leaves, and hanging weeping form which is distinctive to ahihi. Ahihi is endemic to the island of Oahu. 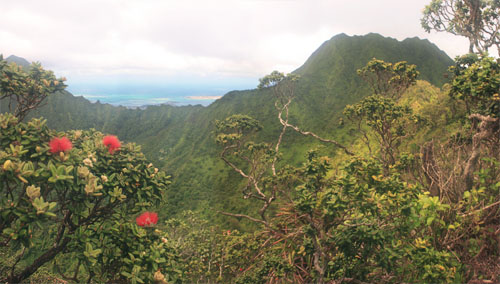 While hiking further back along the ridge, we came across another species of ohia lehua known as lehua papa (Metrosideros Rugosa). Lehua papa is endemic to Oahu and grows near and along the Koolau Summit ridge. One of its distinctive characteristics are its tough, stiff and deeply furrowed leaves which are covered with hairs only on the backside. The summit of Lanihuli towers over the right side of the photo above with lehua papa flowers on the left. 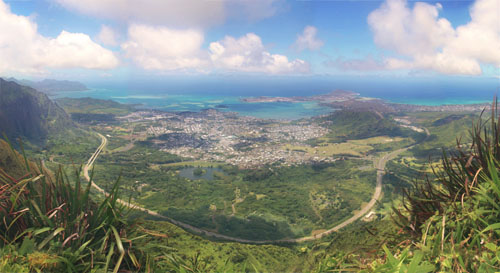 The final push to the top of Lanihuli climbs steeply and provides a spectacular view of Kaneohe on the Koolaupoko Coast of windward Oahu. Magnificent shades blue and azure from the waters off Kaneohe Bay and Mokapu Peninsula contrast against the lush green landscape as H-3 curves along the base of the Koolau Mountains along the contours of Hoomaluhia Botanic Garden. The view is well worth the long hike to the top.

As we made out way back down from Lanihuli, I lingered at the narrow ridge section where ahihi thrives and replayed in my mind the melody of Pua Ahihi for which Lanihuli is renown. I was thankful to have climbed to the summit of Lanihuli with HTMC and reflected on my luck in seeing 4 of the 5 species of ohia lehua on this trail. We are blessed to have such special place within a few miles of urban Honolulu.

A Journey to Lanihuli, by Dayle Turner, Oahu Hiking Enthusiasts

Words to Lei Alia, Words and Music by Puakea Nogelmeier