Koa Bugs in the Hawaiian Islands 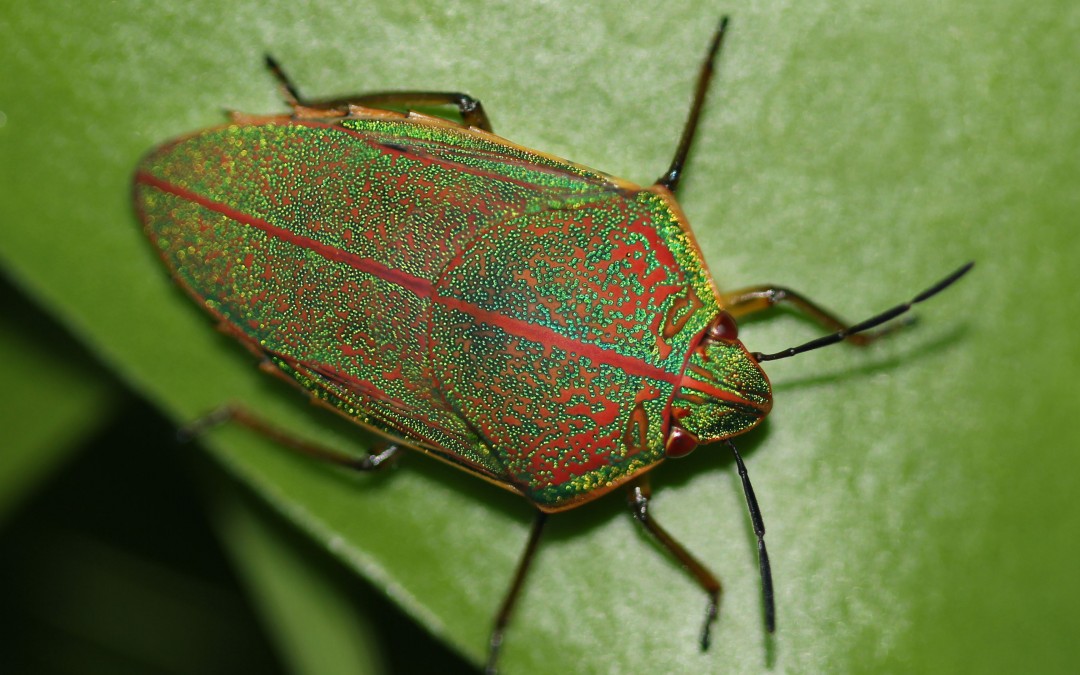 I was thrilled when Aaron Miyamoto invited me to his home to photograph koa bugs. For nearly six months, koa bugs (Coleotichus blackburniae) had become almost an obsession. I learned that koa bugs seem to prefer formosan koa trees (Acacia confusa) — a tree native to Southeast Asia that has become an invasive tree in the Hawaiian Islands — over native koa trees (Acacia koa) and looked on whatever formosan koa trees we came across.  Despite searching on many trails for months on Oʻahu and Hawaiʻi island, our efforts were in vain — we did not find a single koa bug. 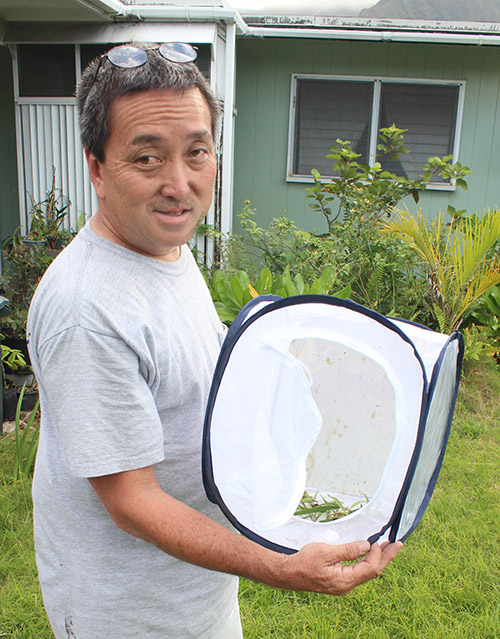 Imagine my excitement when Aaron Miyamoto — nature lover and photographer extraordinaire who raises all kind of insects and critters — told me that he caught koa bug nymphs and raised them to adults!  I was even more thrilled when he invited us to his home to photograph them! 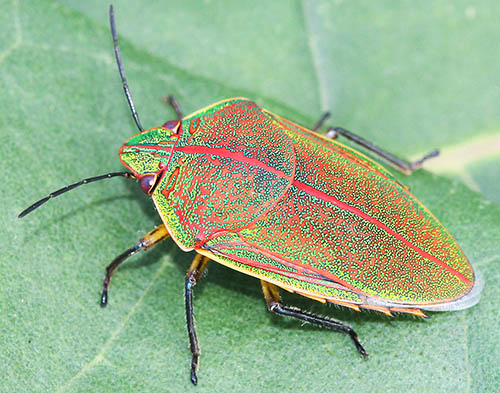 The koa bug is closely related to the green stink bug — named for the malodorous chemical the bugs spray as a defense when threatened.   The chemical defense emitted by koa bugs is much reduced and koa bugs have been dubbed the “stinkless” stink bug.  This is not entirely true as koa bugs still have the chemical but at reduced potency.  It would be more accurate to flip the words around and call them the “less-stink” stink bug. 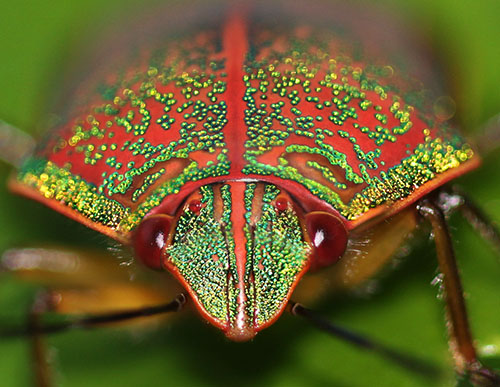 Koa bugs are also called jewel bugs for the iridescence on their exoskeleton or carapace.  If you look closely you can see tiny pits or indentations on the surface of the bug — where the iridescence lies.   Adult koa bugs are almost three quarters of an inch long which make them the largest endemic bug in the Hawaiian Islands.  Colloquially, the term “bug” is used synonymously with “insect”, but in entomology they are not the same.  True bugs cannot chew — they have piercing, sucking mouth parts which are used to pierce plants or animals with long, tube-like mouth, called a proboscis, rostrum or a beak. 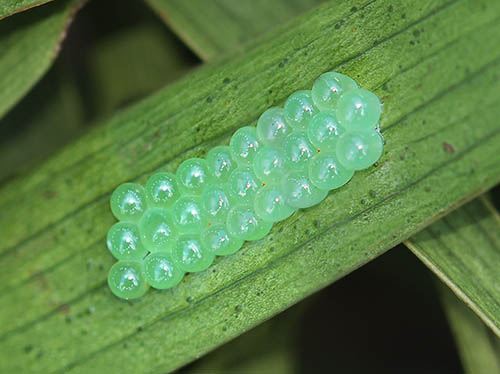 Aaron Miyamoto has been able to raise multiple generations of koa bugs.  The green eggs are only two millimeters across, and are laid in a tight cluster — often in neat little rows. The host plant for nymphs is supposed to be ʻaʻalii (Dodonaea viscosa) or koa (Acacia koa), but koa bugs seem to prefer formosan koa (Acacia confusa).  Adult koa bugs suck the juices from the developing seed pods.  It is speculated that koa bugs prefer formosan koa because they produce seeds pods nearly year-round unlike koa trees which produce them only seasonally. 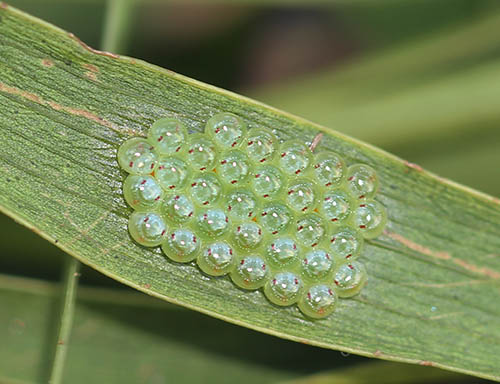 The eggs become translucent as they develop and allow you to see the eyes of the tiny nymphs as they prepare to hatch. 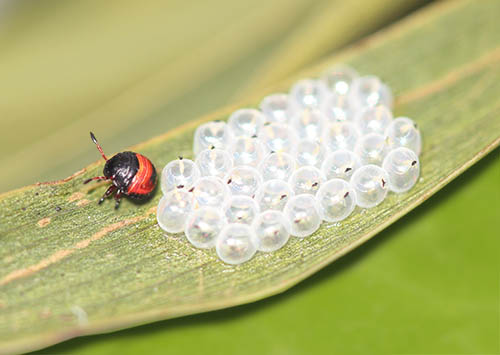 Newly hatched koa bug nymphs are tiny — just a few millimeters in length and are cute little things.  The nymphs often cluster together around their empty egg cases for a while before venturing out into the larger world. 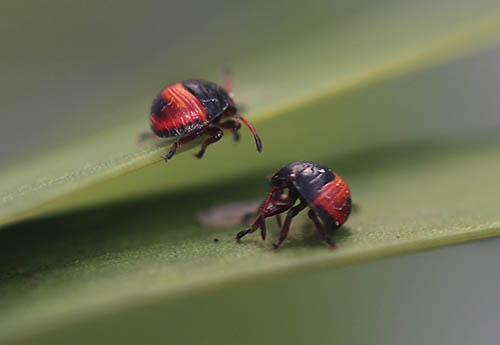 Koa bug nymphs shed their exoskeletons multiple times before they emerge as adults.  When the nymph exceeds the size of its exoskeleton, the carapace must be shed to accommodate the growing nymph.  Each new nymph stage is called an instar. 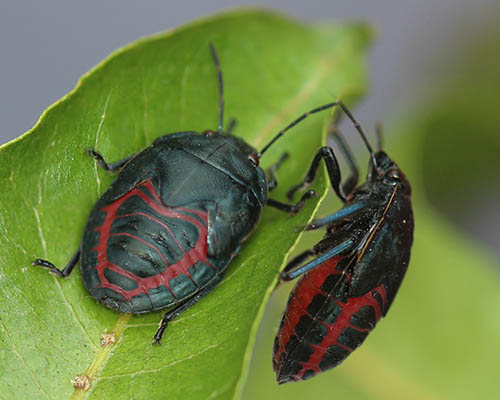 Unlike adult koa bugs which fly around and make a buzzing sound, nymphs cannot fly. By the time the nymph reach the 5th instar, they have an fancy red and black pattern on their abdomen and a blue color on their legs. 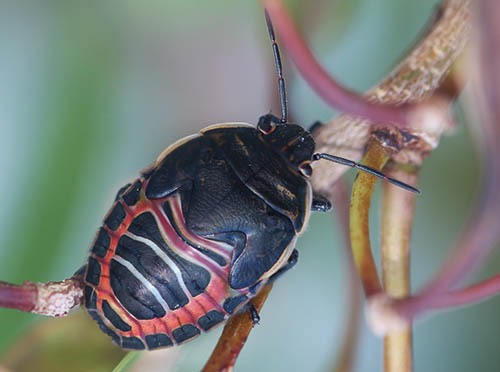 According to the Hawaii Biological Survey, the population of koa bugs has been significantly reduced due to a parasitic fly that was released to control the green stink bug — an agricultural pest.  Unfortunately, the parasitic fly also attacks the koa bug.  The Survey says koa bugs are still around on all the Hawaiian Islands, but in very low numbers. 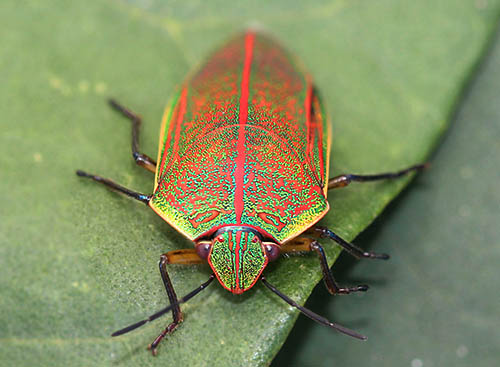 Aaron Miyamoto has been raising koa bugs and releasing them into the wild to increase their numbers.  Here’s hoping that the spread of formosan koa and Aaron’s releases will result in a comeback.  Many thanks to Arron Miyamoto for allowing me to photograph his koa bugs and for spear-heading the effort to bring them back!  Big Mahalo to Aaron!

P.S.  Aaron Miyamoto has a Facebook Page dedicated to koa bugs — Friends of Koa Bugs.  Check it out to see his latest crop of koa bugs! —