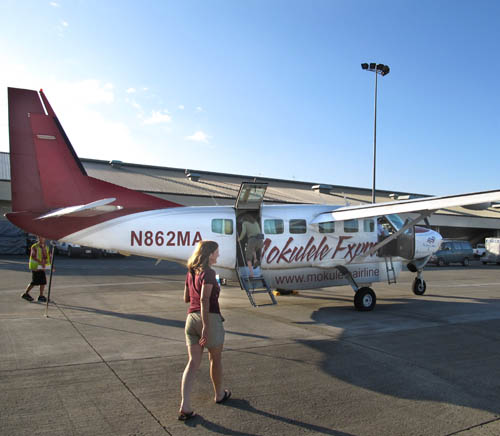 On the first day of our Molokai adventure, we went to Kawaʻaloa Bay in Moʻomomi Preserve to remove invasive weeds from some of the largest sand dunes in the Hawaiian Islands.

I rounded up 18 hikers for 3 days of hiking, weeding, and trail clearing on Molokai. Our primary goal was to clear the legendary Wailau Trail that leads to one of the remotest valleys in Hawaiʻi. A smaller subset of the group — August Smith, Thea Ferentinos, Karen Liliker, Jeanne Furukawa, Kay Lynch, and Ellyn Tong, and I — went 3 days before the main group for a total of 6 days on the Friendly Isle.

We flew to Molokai on a 9 passenger Cessna with Go-Mokulele. After a 30 minute flight we picked up two 4WD SUV vehicles from Island Kine Car Rental. We then drove to Kaunakakai to pick up food at Misaki Store and Friendly Market, and continued on to the Waialua Pavillion on the east side of Molokai where we would camp for the next 6 days. We then drove to The Nature Conservancy (TNC) base yard to meet Wailana Moses for a service project.

Our plan was to pull invasive weeds at Kawaʻaloa Bay in Moʻomomi Preserve which is home to rare and endangered plants found no where else in the world.  In order to prevent the spread of invasive plants between islands, we washed our shoes and hiking gear before coming to Molokai and brushed-off our shoes at the TNC base yard before pushing-off for Moʻomomi. 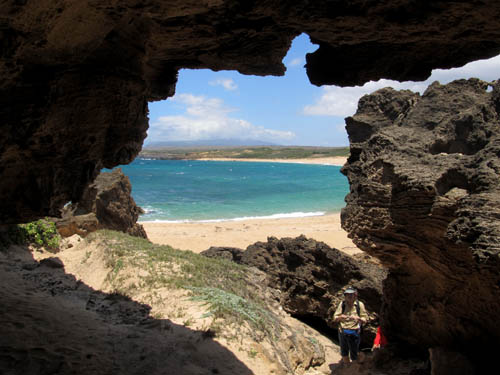 Since it was after noon by the time we drove down the rutted dirt roads to Moʻomomi, we ate lunch at Kawaʻaloa Bay, which has a beautiful beach with sandstone cliffs into which a small shallow cave has been carved. 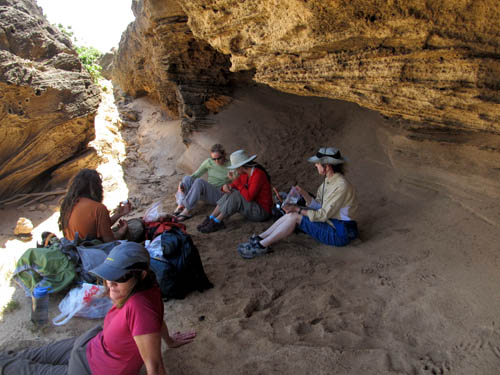 While eating our lunches in the cave overlooking the magnificent bay we marveled at how the sand was lithified — turned into sandstone over the passage of time — and then carved by the elements into an over hanging ledge. 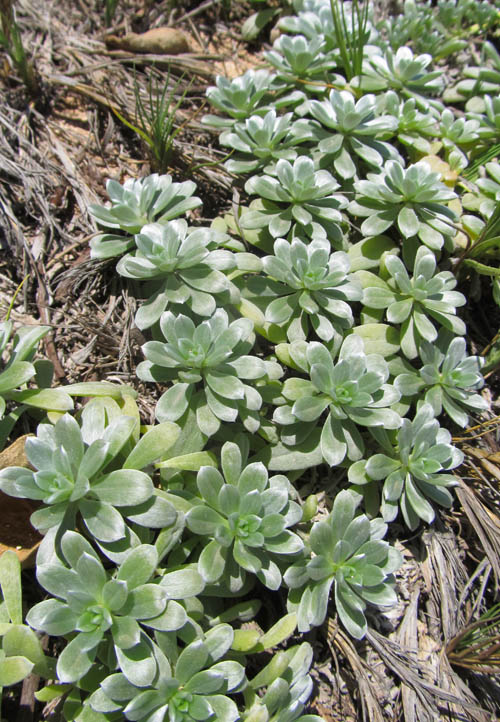 One of my favorite coastal plants — hinahina (Heliotropium anomalum) — crawls over the sand as ground cover at Moʻomomi.  It never ceases to amaze me how the leaves of the plant create a lovely geometric pattern. 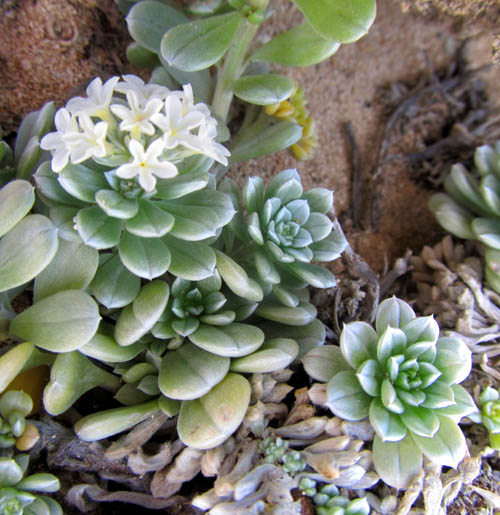 Even more charming were tiny white flowers of hinahina which have a yellow center.  The sweet fragrance of hinahina flowers filled the air as I examined the flowers up close. 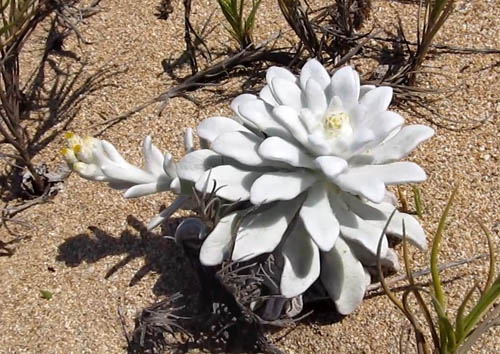 One of the really rare plants at Moʻomomi is ʻenaʻena (Pseudognaphalium sandwicensium var. molokaiense) which is found only on Molokai.  The leaves are covered with a soft white velvet which help the plant conserve moisture in the dry climate.  I was pleased to see a number of them with flowers buds poised to bloom. 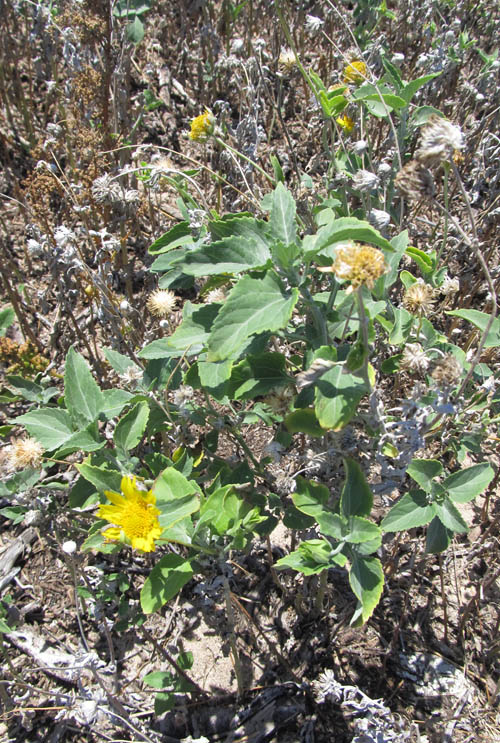 Our task for the day was to pull out golden crown-beard (Verbesina encelioides) by the root.  This invasive weed has spread along dry coastal areas of many of the Hawaiian islands where it crowds and chokes out native plants. 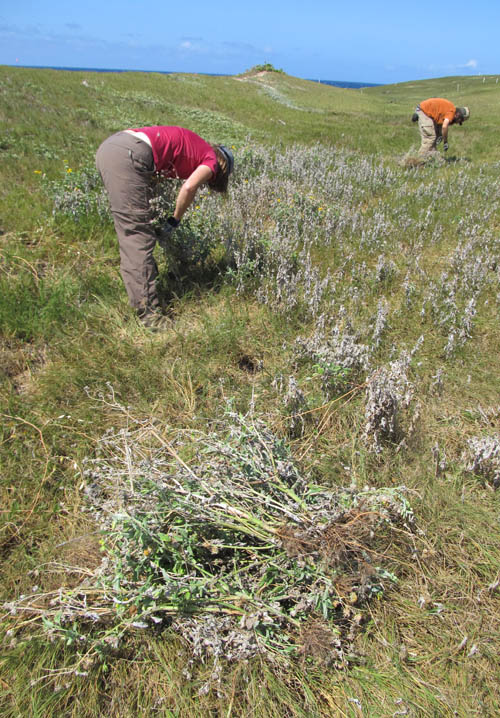 Wailana told us that kiawe once dominated the area but had been removed several years ago.  Much of the sand dune has since been reclaimed by grasses — many of them native like this ʻakiʻaki grass (Sporobolus virginicus).  Unfortunately, golden crown-beard has begun to grow among the grasses. 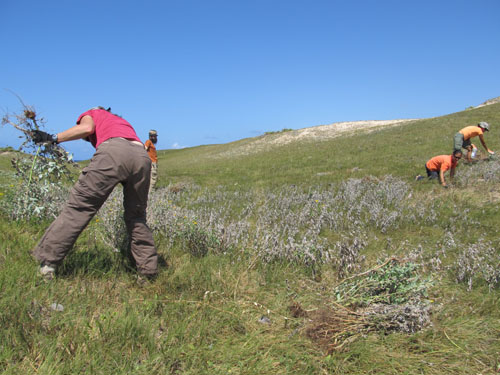 For the next three hours we spent the time crouched over or on our hands and knees pulling the weeds out by the root.  Most of the golden crown-beard were small and not deeply rooted, so they were easy to pull out by the roots.  We did, however, encounter the occasional larger plant which took much more effort to pull out. 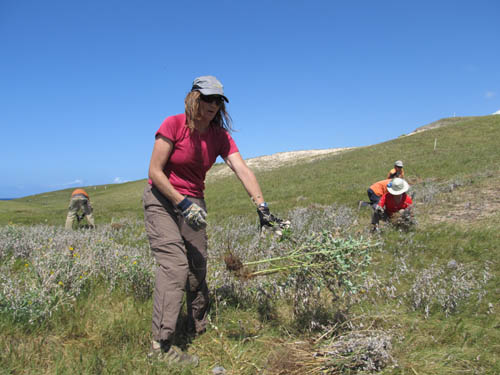 Moʻomomi is windy.  Gusts of wind blow the sand on the shore inland creating some of the largest sand dunes in Hawaiʻi.  As we pulled the weeds up by the root, the wind kicked up the fine sand in the air and by the the end of the day we were covered with a fine grit. 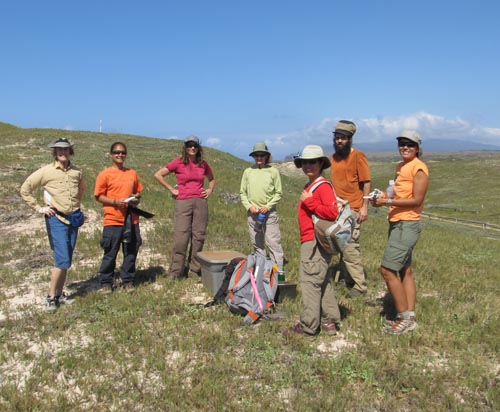 After clearing a decent sized patch of the invasive weed, we admired our handy-work and took a group shot where the weeds had been.  From left to right is Kay, Wailana (with the TNC), Thea, Karen, Jeanne , August, and Ellyn. 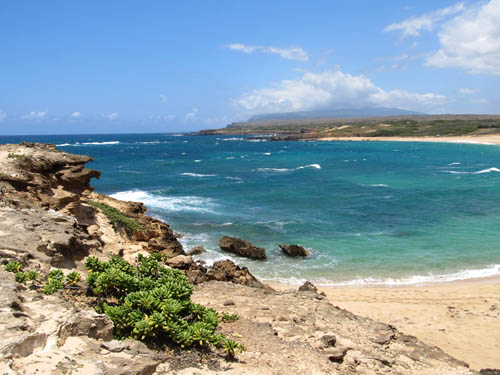 We could not wait to dive into Kawaʻaloa Bay to wash the fine grit off our bodies.  The water felt great as we swam and splashed in the bay.  As we enjoyed the water, we could see the Kamakou Mountains off in the distance where we would be hiking for the next two days. 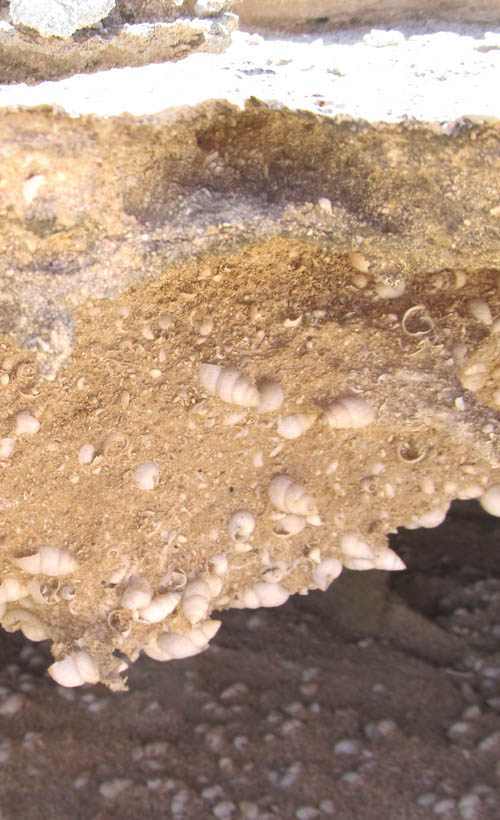 One of the unusual things about Moʻomomi are fossils in the sandstone.  The fossilized shells of land snails can be found throughout the preserve like the ones embedded in this sandstone ledge. 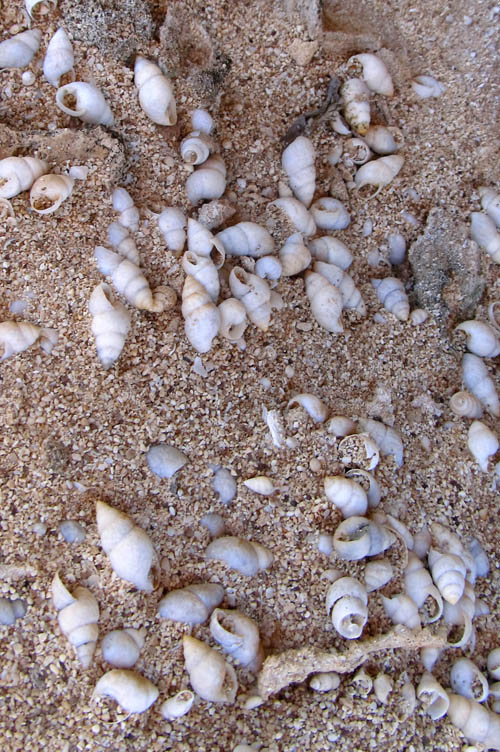 Beneath the ledge where the sandstone had disintegrated back into sand, were the loose shells of literally thousands of land snails. 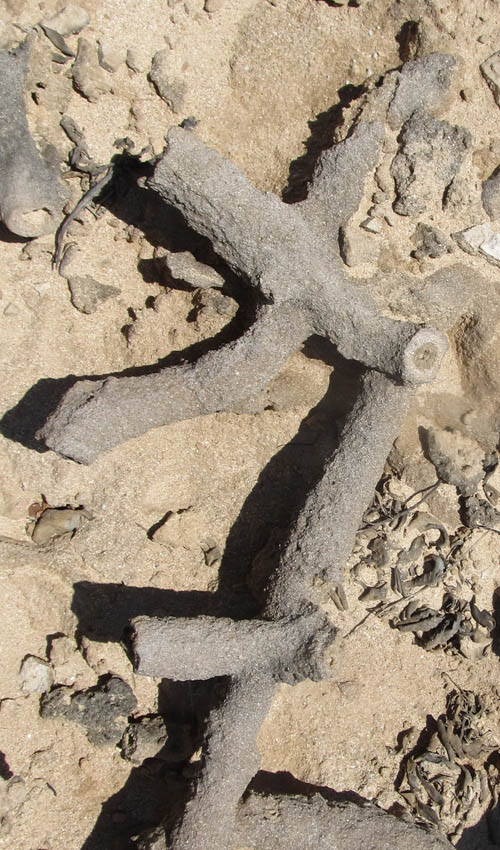 Another unusual sight were fossilized tree root casts made of sandstone.  Sam Gon III, TNC Science Director, explained to me that these tree root casts were formed when the root hairs around the root decayed and solidified the surrounding sand into the shape of the root. 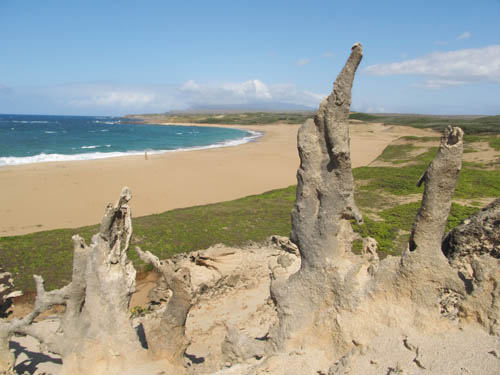 Some of the more impressive root casts stand 2-3 feet high and lend an odd twist to the landscape.  What I’m curious to find out is how the tree roots and land snails came to be covered in sand in the first place.  Perhaps by tsunami?  Or massive landslide? 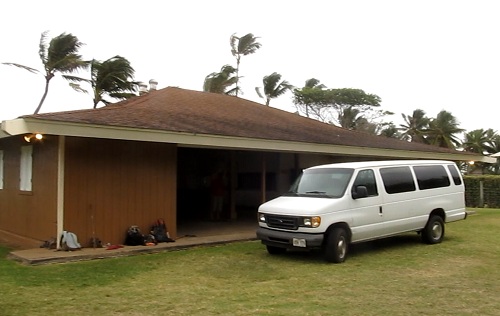 With our day drawing to an end, we left Moʻomomi and drove back to the TNC base yard where we bid farwell to Wailana.  We then drove through Kaunakakai and continued on to the Waialua Pavillion in East Molokai where we set up our tents for the next 5 nights. 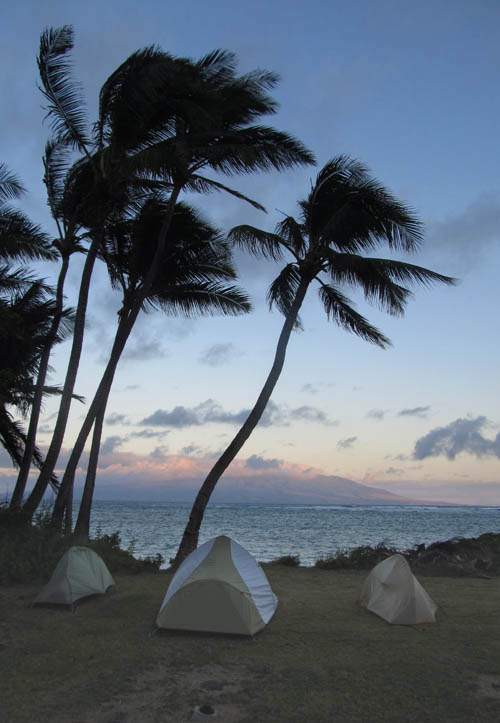 We set up our tents along the shores of the Pailolo Channel between Molokai and Maui, and admired the views of Kaʻanapali on West Maui as the day drew to an end. 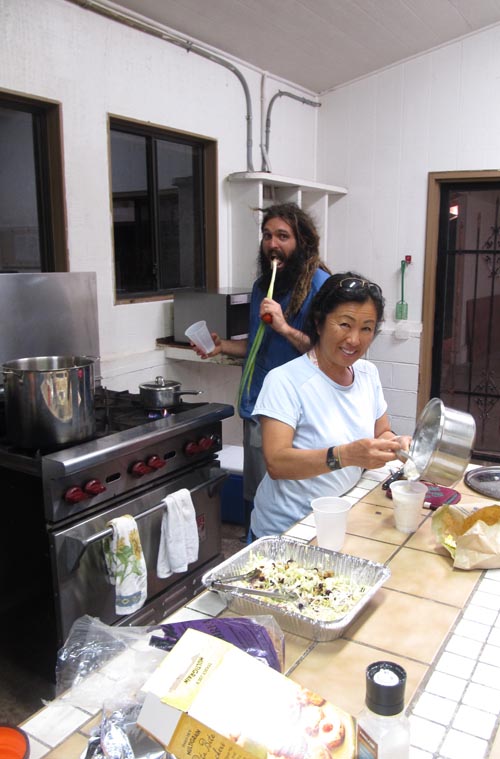 We were lucky that Jeanne made a delicious tortellini soup with Portuguese sausage for us while August prepared a vegan meal.  After eating dinner and enjoying each others company, we prepared for the next day’s adventure and retired to our tents for the night.

Before drifting off to sleep, I could not help but replaying in my mind the great time we had pulling invasive weeds, admiring native plants found no where else in the world, and seeing the fossilized remains of lands snails and trees.  What a great first day on Molokai!