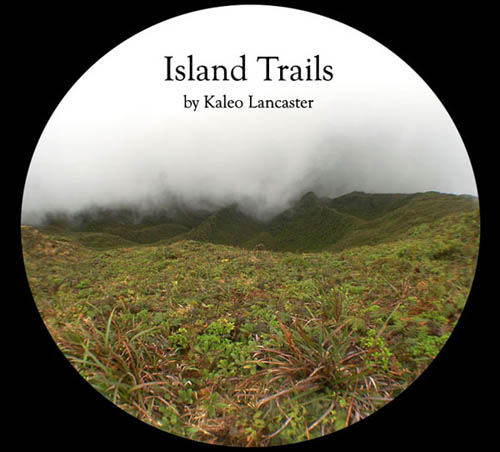 Due to dark rain clouds over the Koolau Mountains we decided to forgo our original hiking plans in favor of a little known loop up Kaupo Cliffs and down the TomTom Trail in Waimanalo.

My premonition came true when Kaleo Lancaster emailed me asking about the condition of the Waiahole Uka trail that by coincidence I had cleared the day before.  Despite never meeting him before I knew exactly who he was.  For almost two years now I have been following Kaleo’s blog — Island Trails.  Kaleo is an extreme hiker and a photographer-videographer who has an uncanny ability to capture the hiking experience.  Anyone who has not seen his videos crossing narrow dikes and climbing steep ridge lines is missing out big time — you MUST check out his blog.  For some inexplicable reason, I knew I would eventually meet him.  Since I was only able to clear the lower uluhe sections of the Waiahole Uka trail, I asked Kaleo if he’d like to join me the next Sunday to clear the rest of the way to the top, which he accepted without hesitation.

But when the day of the hike came, dark clouds hung over Waiahole.  Since wet conditions make the already dangerous ascent even more difficult, I thought it best to reschedule the climb and suggested we do Kaupo Cliffs in much drier Waimanalo instead. I called August Smith and Pete Clines, who were planning a crossover from Olympus to Konahuanui to see if they wanted to join us.  Since the weather was a factor there too, they decided to join us to do the Kaupo Cliffs – TomTom Loop. 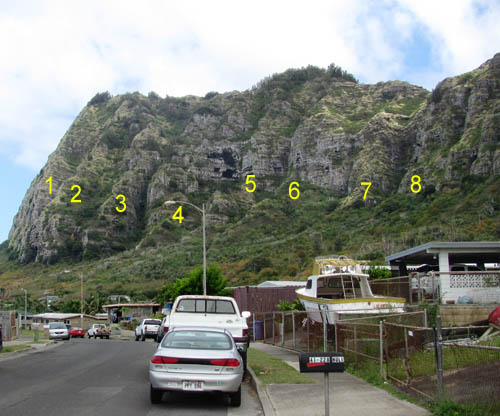 The ridges on Kaupo Cliffs numbered from makai to mauka

Kaupo Cliffs stand some 1,300 feet above Waimanalo Beach where a series of ridges have been carved into the rocky cliffs.  Although the Hawaiian Trail and Mountain Club (HTMC) has long climbed Kaupo Cliffs, the trail is considered too dangerous to be on the regular club hike schedule and is not frequently used.  Because the way up is not immediately obvious — the route contours between adjacent ridges to avoid steep cliff faces — Kaupo Cliffs has been lost multiple times over the 100 year history of the club and refinding the route has become a de facto club tradition.

Long time club member John Hall told me that Kaupo Cliffs is an old HTMC route that could possibly be an old Hawaiian trail like the TomTom Trail discovered in 1922.  TomTom was a well traveled trail between two Hawaiian villages — one near Koko Head and the other in Waimanalo.  TomTom is also very close to Kaupo Cliffs — no more than a mile away.

But unlike TomTom, Kaupo Cliffs was more likely a secret route.  In ancient Hawaii, kukini — the swiftest runners who were the messengers and couriers of the kings — would probably use TomTom as the fastest way to get to the other side of the mountain.  But in times of war and conflict, TomTom was probably watched and kukini needed alternative routes to bypass enemies. Kaupo Cliffs is believed to be one such route.  Since speed and stealth were essential to complete their missions, kukini would keep their routes secret and passed them down only to other trusted kukini in their lineage. 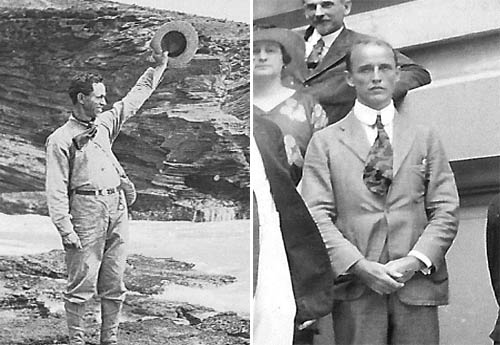 Tom McGuire (on left) in 1925 and Tom Cadle (on right) in 1921. In 1921 Tom Cadle was the first to climb the backside of the 3rd Peak of Olomana. Tom McGuire’s photo courtesy of Noel McCully — a descendant of Tom McGuire. Tom Cadle’s photo is from the HTMC Archives.

John Hall remembers climbing up Kaupo Cliffs with the club in the 1960’s but the route eventually fell into disuse and no one could remember the way up the cliffs.  Silver Piliwale refound the route sometime in the 1970’s and passed the route on to other club members.  Before he passed away Silver asked Stuart Ball to keep hiking Kaupo Cliffs so the route would not be lost. 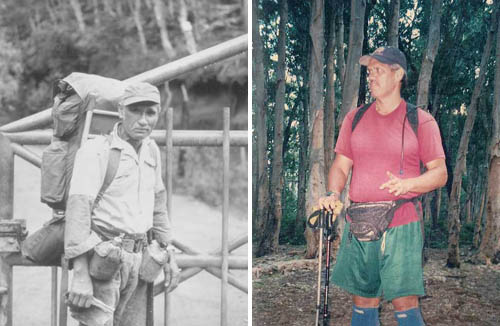 Silver Piliwale (on left) in 1971  and Dayle Turner (on right) in 1999 are credited with refinding the route up Kaupo Cliffs during their respective eras in the club. Photos from HTMC Archives. 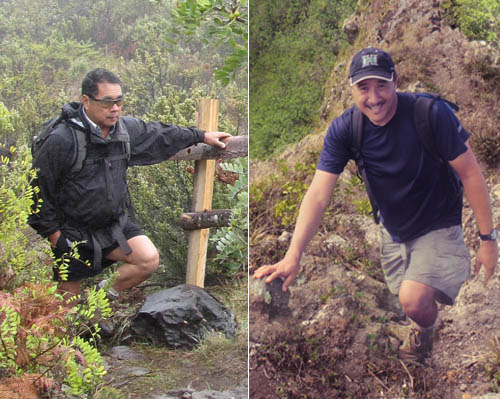 Earlier this year, Justin Ohara and I were determined to refind the route as part of the club’s centennial.  So we read Dayle Turner’s accounts in the OHE archives and gleaned valuable information to refind the route.  After multiple false starts going up ridges 6, 5, 4, 3 and 2 over three separate attempts, we finally refound the old route up Kaupo Cliffs. 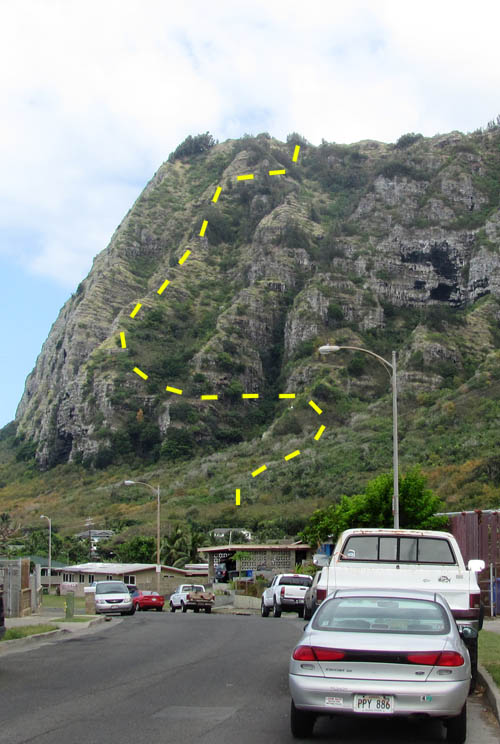 The yellow dashed line parallels the old route up Kaupo Cliffs on ridges 4-3-2-3.

After rendezvousing at the HTMC clubhouse, Kaleo Lancaster, Ryan Chong, Duc Ong, Matt Chessey, and I made our way through the residential neighborhoods at the foot of Koolau Mountains.  Starting from the terminus of the TomTom Trail we made our way for almost a mile through the brush — tall grasses, haole koa, and tangles of milo trees.  When we reached a dry streambed we  turned to the left to climb briefly up ridge 4. 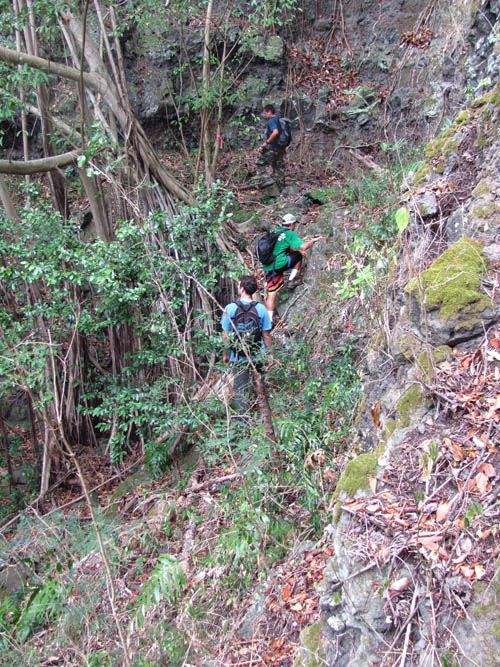 The key to Kaupo Cliffs is to go just a short ways up ridge 4 all the while heading towards the prominent dry waterfall chute between ridges 4 and 3.  Deep within the fold is a ledge that conveniently contours over to ridge 3. 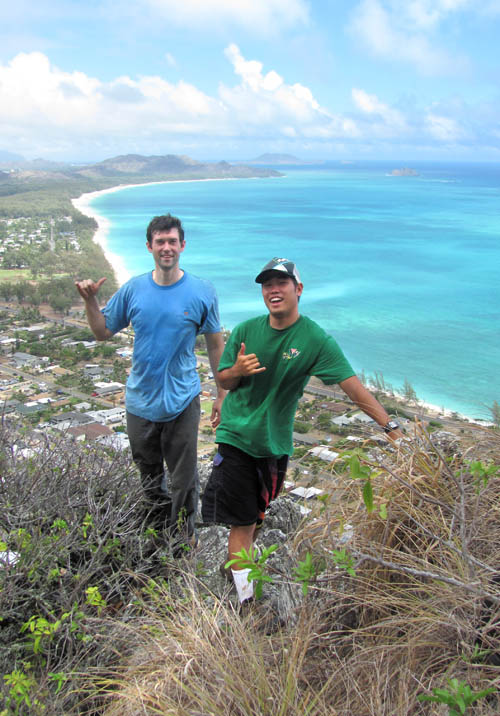 Matt and Ryan flash shakas when we reach ridge 2, where the greater part of the climb is made

But rather than to climb up ridge 3, continue on to ridge 2 which is the easiest of the ridges to climb and can be taken most of the way up.  When August called to tell me they were making their way through the brush I instructed them to follow the ditch and to turn mauka to follow a dry streambed.  We took frequent breaks to slow our forward progress so that Pete and August could catch up with us. 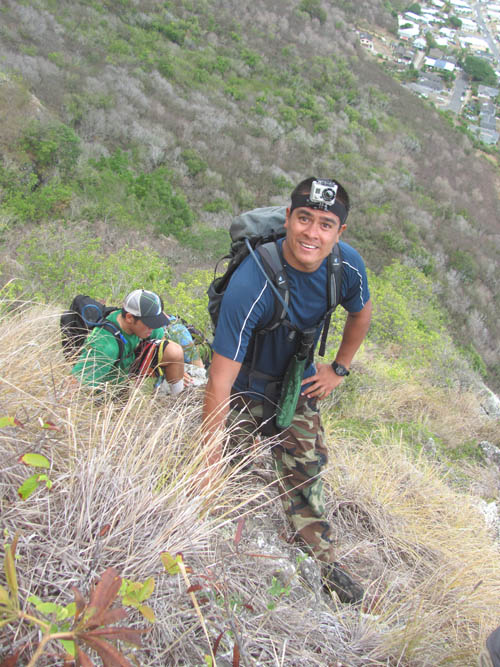 Kaleo with video camera mounted to his forehead.

For much of the way up ridge 2 we climbed straight up the ridgeline. Click here to see Kaleo’s stunning video of the steep climb up Kaupo Cliffs. One of the hazzards on Kaupo Cliffs is falling rocks.  Many of the rocks are loose and are easily dislodged — those following the wake of others must be vigilant to avoid falling rocks. 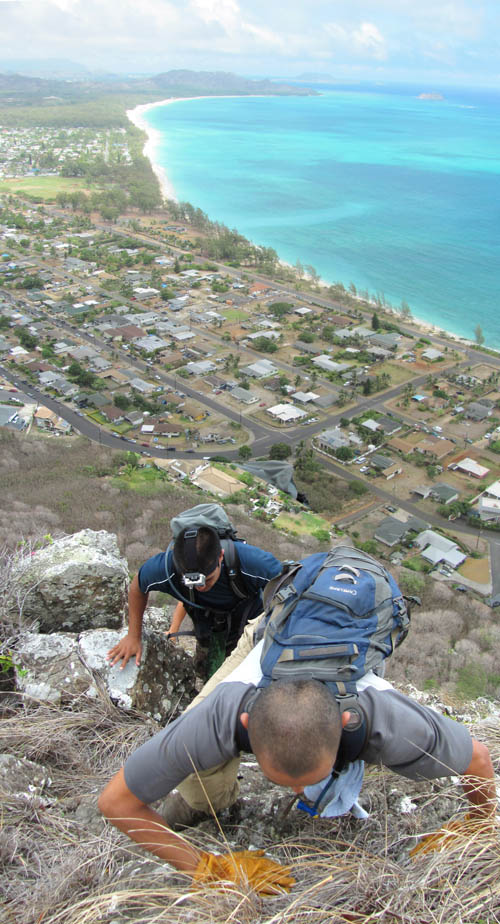 Duc keeps his center of gravity low as we climb up ridge 2.

While most of the climb can be made straight up the steep ridge line, we sometimes contoured briefly to the left or right and then regained the ridge line further up.  On one such contour there was a really old rope held by pitons upon which a fallen tree was snagged.  But the rope is not necessary at that spot and we climbed up and around the obstacle to regain the steep ridge line.  Duc said certain spots reminded him of the backside of the 3rd peak of Olomana which gave him a major adrenaline rush. 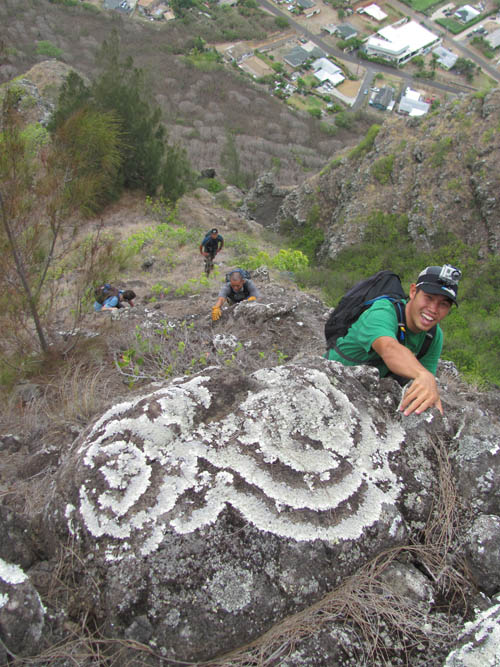 Ryan climbs up the rocky ridge where white lichen grows in concentric circles.

Neither Pete nor August had done the Kaupo Cliffs route before and I was bummed when August called to to tell me they were led astray by a different set of ribbons that suddenly stopped — possibly a set of ribbons Justin and I left behind on one of our false starts before finding the real route.  But Pete and August were undaunted and decided to improvise their way up Kaupo Cliffs. Fortunately, the both of them are accomplished climbers and they had several lengths of rope with them. 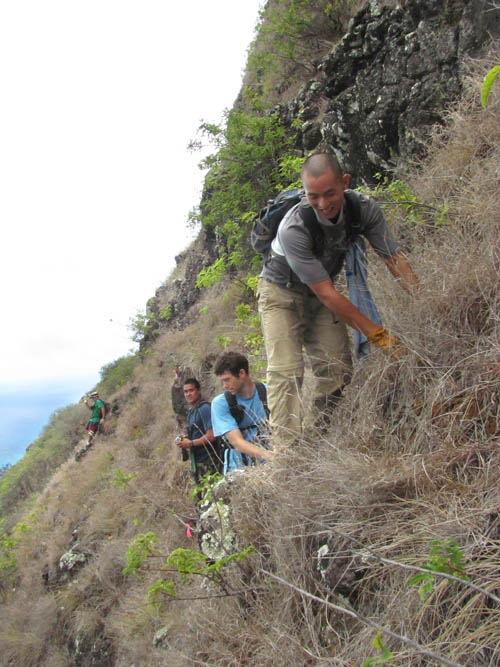 When we reached a point on ridge 2 where the ridge became much steeper, we contoured over towards ridge 3 where an old rope held in place by rusted pitons was installed.  The rope was so old that lichen grew on it so we dared not use the rope.   The margin for error is very small along this contour and any slip is likely to result in a several hundred foot fall.  Fortunately, we passed over without incident and made our way to ridge 3. 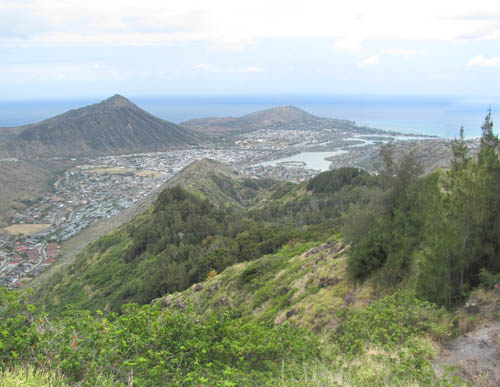 After making a final climb up crumbly rock where one must push off opposing rock faces, we reached the top and looked down on the other side of the island — Hawaii Kai!  While the rest of the group ate lunch, I called August and learned they found what appeared to be a doable route and were making good progress. So I relaxed and had lunch too. 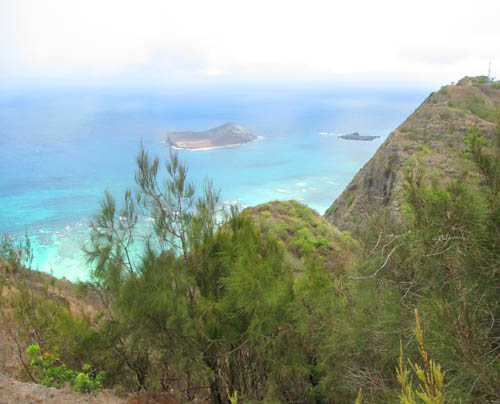 After admiring spectacular views of the mountains over Makapuu and the offshore islands of Manana (Rabbit Island) and Kaohikaipu (Turtle Island), we pushed off on the Koolau Summit Ridge towards the TomTom trail to look for Pete and August who were forging a different way up Kaupo Cliffs. 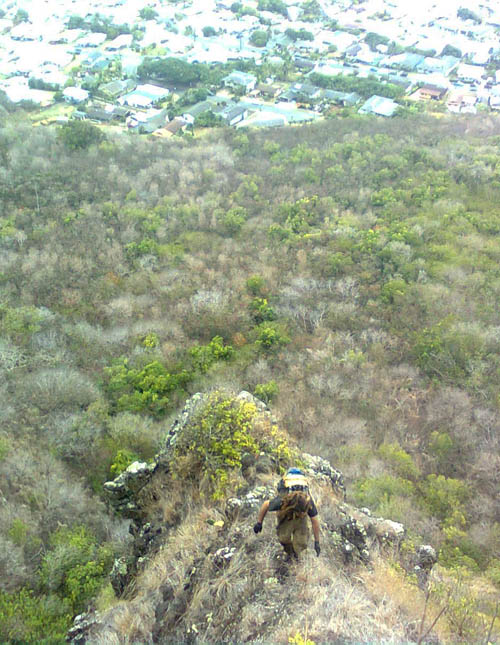 While making our way towards TomTom, we looked down ridges 4, 5, and 6 looking for Pete and August climbing up, but they were no where to be seen and I was starting to get a little concerned. 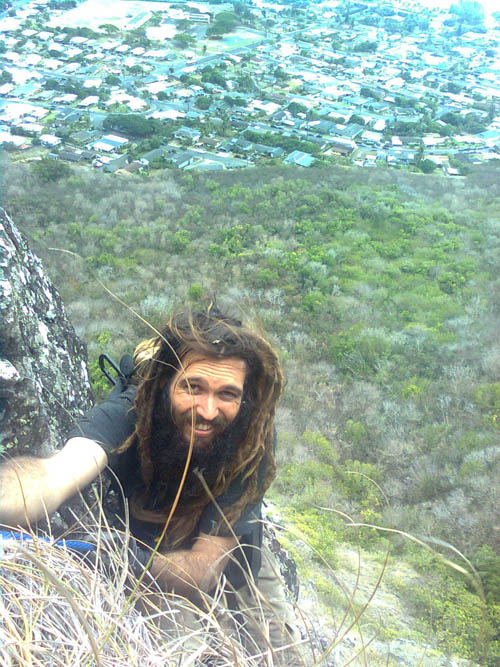 But right where the Koolau Summit Ridge drops down to its lowest point over Waimanalo who should we see?  Pete and August!  Topping-out on ridge 7 — which Pete later dubbed “Kau-Faux Cliffs” — the route is incredibly steep and is much harder and more dangerous than the Kaupo Cliffs route we took up ridges 4-3-2-3. 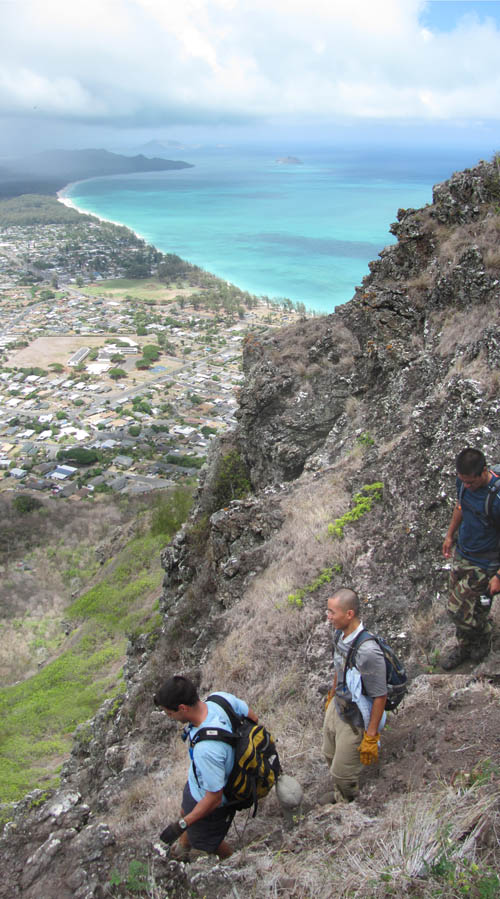 After Kaleo, Pete, and August met each other in person for the first time — they already knew of each other online — we made our way along the Koolau Summit Ridge towards TomTom.   Several rain squalls blew in and rained on us briefly but they did not last long and we continued to the electrical towers where we took a break before descending the TomTom Trail. 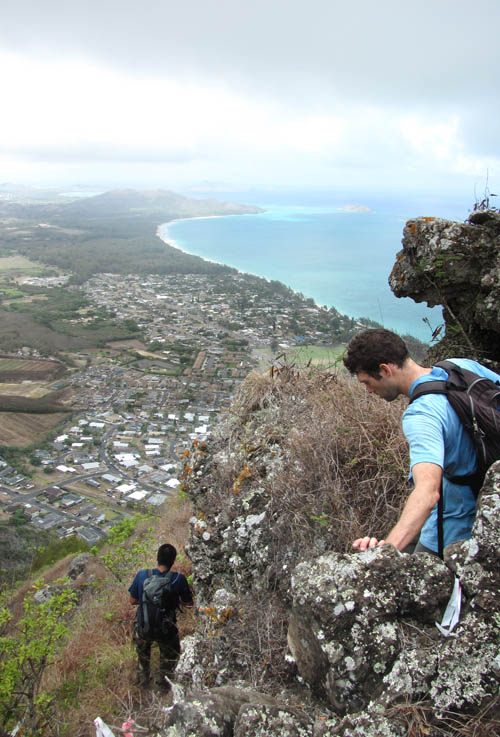 The amazing thing about the  TomTom Trail is that even though it loses considerable elevation over a fairly short distance, there are ledges and footholds along the entire length of the trail making it safe and easy to negotiate.  Of the multiple routes found by HTMC that descend the Koolau Mountains, TomTom is the only one safe enough to be put on the regular hike schedule. 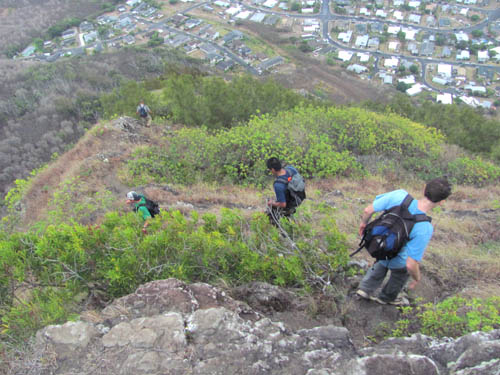 While making our way back down to sea level, I reflected on what a great time I had enjoying magnificent views of the Koolaupoko Coast, hiking with Kaleo for the first time, and passing the Kaupo Cliffs route on to a new generation of hikers. 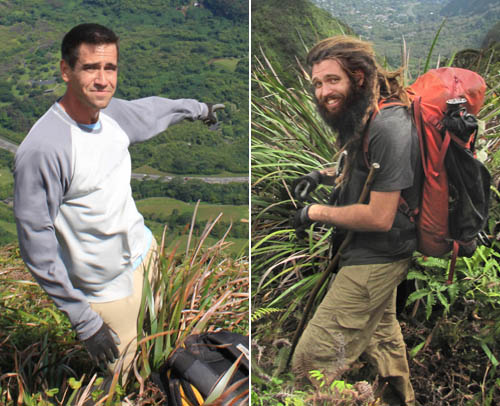 While resting in a grove of ironwood tree at the bottom of TomTom, we learned that Pete free climbed the entire route up ridge 7 to the top.  Had the rocks failed and broken-off as they often do along this stretch of the Koolau Mountains, he would have fallen. But the rocks held and Pete installed a rope on the most dangerous sections to permit August to climb up more safely. 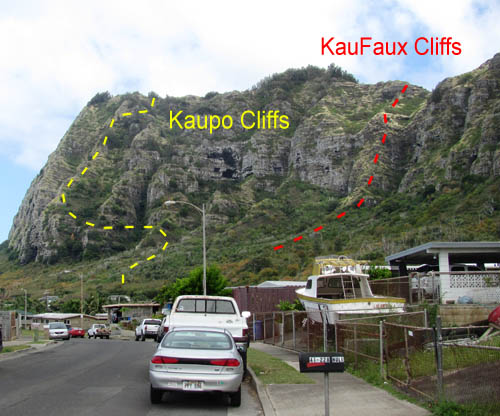 While making our way through the residential neighborhood back to the clubhouse Pete pointed out the route they had taken .  The way up ridge 7 — KauFaux Cliffs — is incredibly steep with a near vertical section about three-quarters of the way up.  What an incredible climb!

WARNING:  The route up Kaupo Cliffs is is not for the acrophobic or faint of heart.  The route is steep and climbs over crumbly rock that is easily dislodged.  While the climb is doable without ropes, there are a handful of spots where the margin for error is small.  A slip at any of these tricky spots is likely to result in serious injury if not death.  The route up KauFaux Cliffs is steeper and even more dangerous than Kaupo Cliffs and should only be attempted by experienced climbers with the proper climbing equipment.  It would be a good idea to have an advance medical directive and last will and testament in place before attempting KauFaux Cliffs.