I joined the trail maintenance crew of the Hawaiian Trail and Mountain Club (HTMC) to clear the trail that leads to the summit of Kamaileunu Ridge on the Waianae Coast of Leeward Oahu.

Although the hike to the summit of Kamaileunu is only a 7-mile round-trip, it starts at sea level and is one of the toughest hikes on the island.  In addition to the big 3,270 foot gain in elevation, the ridge is dry, devoid of shade, and brutally hot under the full-brunt of the sun.  To make matters worse, the terrain is a jumble of uneven rocks that are punishing on the feet especially during the steep descent on the return leg of the trip. 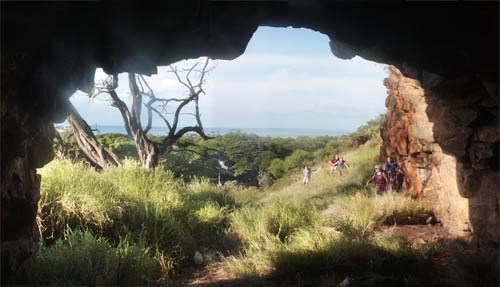 One of the more interesting things about Kamaileunu Ridge is Kuka’au’au Cave near the foot of the ridge. In the photo above hikers approach the entrance of Kukaauau Cave which is 25 feet wide and 10 feet high and extends 40 feet into the mountain.  The cave sits just above the Board of Water Supply well that taps the source of Keko’o Springs — an aquifer at the foot of the ridge.  Although it is no longer active, Keko’o Springs once bubbled to the surface and provided water to the village of Kamaile which was an important site for taro cultivation.

Some of the large trees at the foot of Kamaileunu Ridge, such as the kiawe tree at the entrance of the cave in the photo above, have roots that tap the aquifer and enable them to remain green year-round even in the driest summers.  After exploring the cave, Kenji Suzuki, Larry Basch, June Miyasato, Fred Dodge, and I take an alternate route that rejoins the main trail further up the ridge. 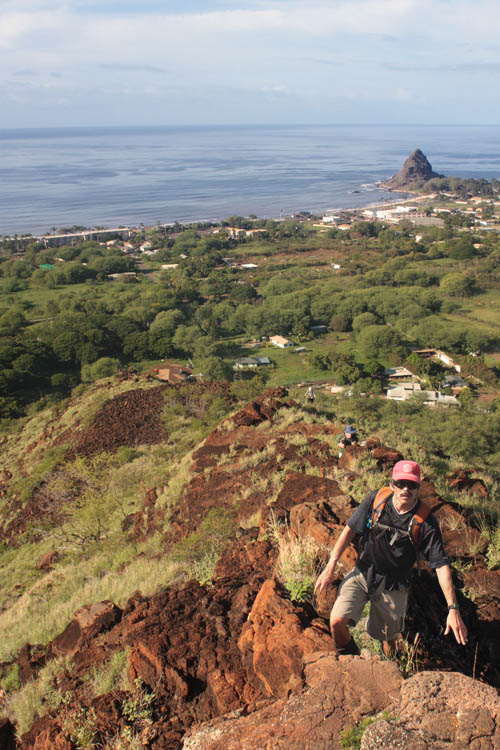 Another interesting feature on Kamaileunu Ridge is the archaeological remains of Kamaile Heiau at about the 400 foot level of the ridge.  Keko’o Springs, Kuka’au’au Cave, and Kamaile Heiau are all related sites that were part of the Hawaiian settlement of Kamaile.  Arnold Fujioka and other hikers pass Kamaile Heiau — the flat rectanglar platform of rocks about 130 feet by 60 feet in the background on the left side of the photo — as they climb up the ridge. 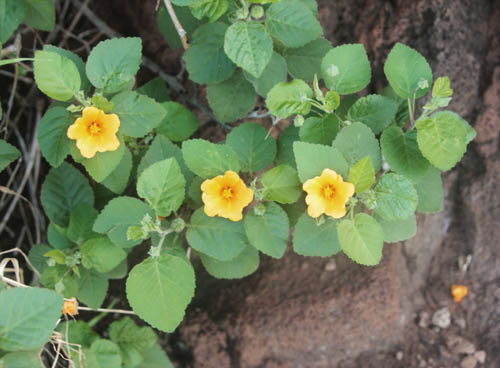 Due to Kona winter storms over the past few weeks, Kamaileunu Ridge and the Waianae Coast received considerable rainfall and the vegetation was lush and green.  In the summer months when rain is scarce, the landscape turns from green to yellow to golden-brown.  The lower elevations of the ridge beneath 2,000 feet elevation are virtually tree-less and are covered in low-lying grasses and shrubs.  Many charming orange-yellow flowers of ilima (Sida fallax), which are indigenous to Hawaii, were in bloom on the ridge. 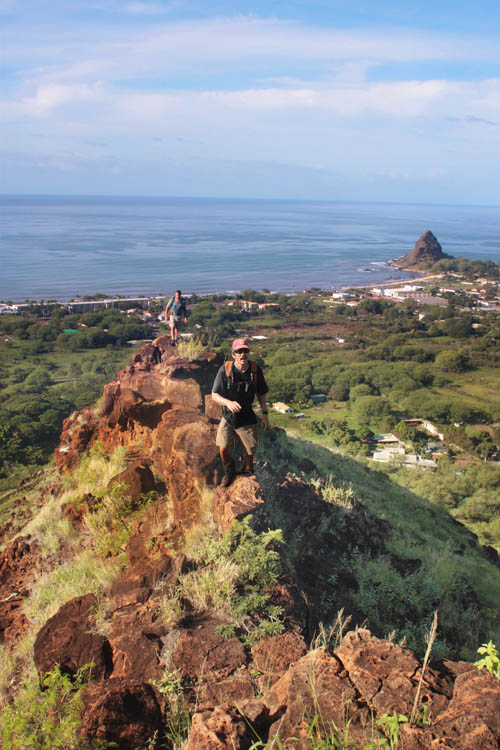 Arnold and Larry follow the ridgeline as they climb up Kamaileunu Ridge.  In places where the rock face is too steep, the trick is to contour on the side of the ridge and then regain the ridgeline further up-slope.  Mauna Lahilahi, the peak on the coastline in the background was once a part of the Kamaileunu ridgeline. 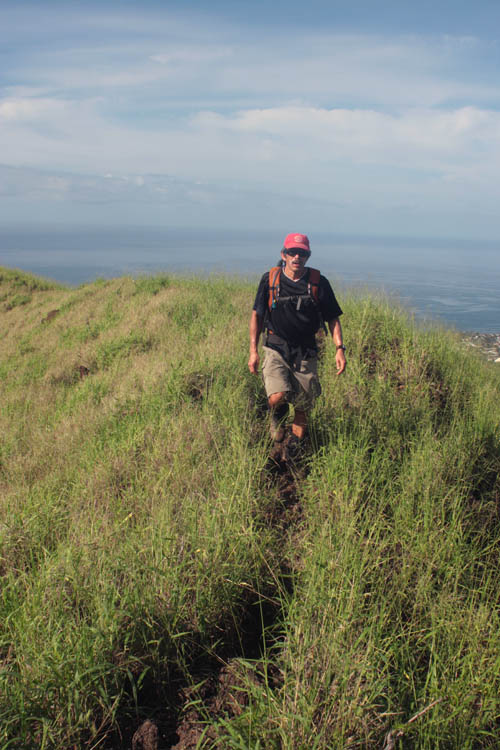 After the initial steep sweaty climb up the ridgeline, the trail eases up and passes over a series of gentle rolling hills for nearly a mile.  At the end of the rolling hills, the ridgeline climbs steeply once again and hikers are confronted with narrow dike rock formations with steep drop-offs on either side. 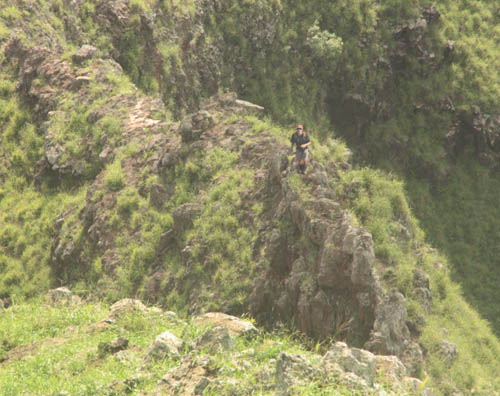 One of the psychologically challenging things about Kamaileunu is that the climb has a series of false summits one right after the other.  Nothing is more disheartening than to think you have reached the top of a peak only to discover another even higher peak hidden behind it. Hikers must be prepared for a relentless climb to the summit. 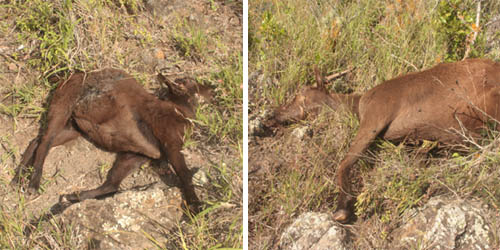 While climbing up the steep ridgeline we came across the carcasses of two goats — a juvenile and a young adult — both of which appear to have recently died. 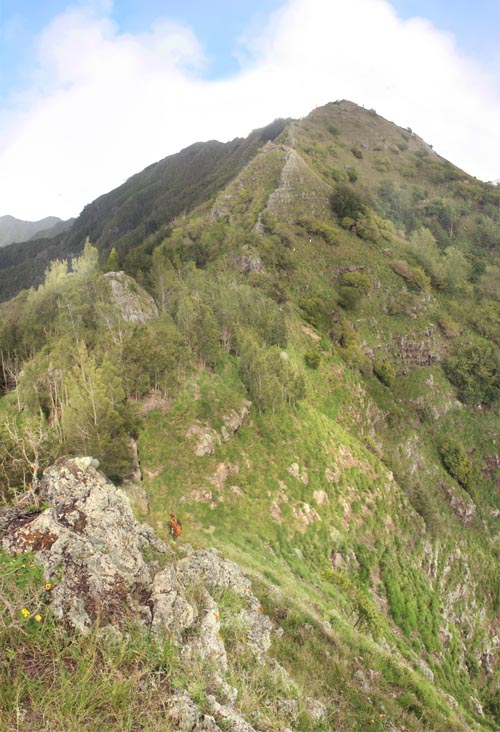 After conquering multiple false summits, we reached the only downhill section during the ascent to the summit.  Hikers must drop down almost a hundred feet and make their way through a grove of ironwood trees before climbing several hundred feet back up to regain the ridgeline.  The peak that appears to be the highest in the photo above is actually another false summit.  Once you reach to the top you will see that there are several more peaks to climb to reach the summit. 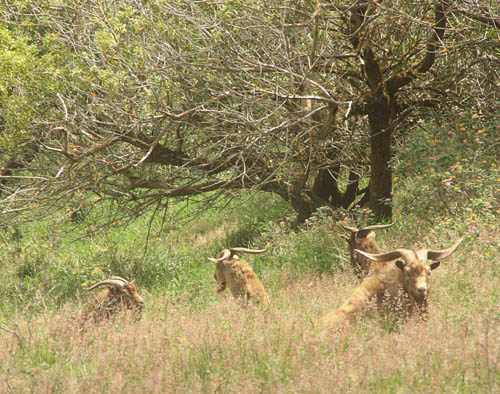 While making our way up the trail, we came across a herd of more than a dozen large goats with horns.  Goats thrive in considerable numbers on the steep mountain slopes of Kamaileunu Ridge. 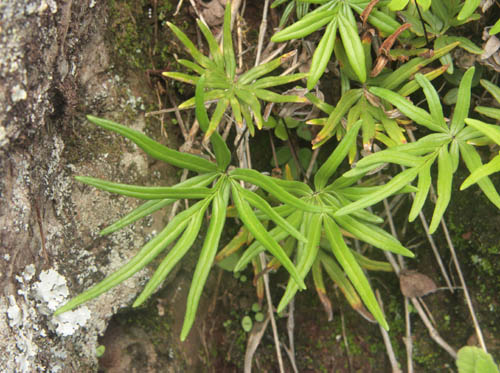 The upper elevations of Kamaileunu Ridge are considerably wetter than at lower elevations.  While the ridge is dominated by introduced plants and animals, native species can still be found.  This unusual iwaiwa fern (Doryopteris decora) grows in cracks and niches in the rocks where moisture collects.  While this endemic fern is not endangered it is not common except in a handful of locations. 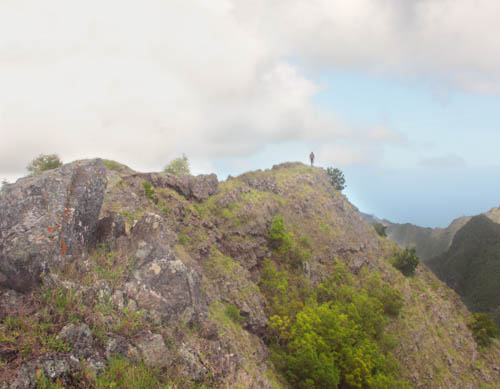 Clouds began to blow in overhead as we made our final ascent to the summit.  After the last big climb, Arnold makes his way over several rocky rolling humps on the ridge top before arriving at the summit of Kamaileunu. 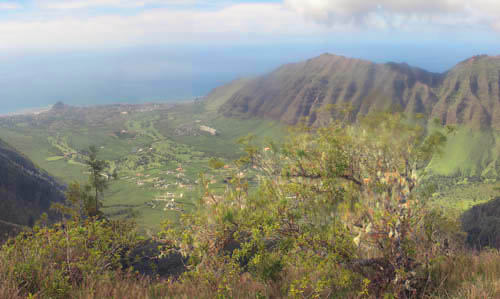 The summit of Kamaileunu Ridge is 3,270 feet above sea level and provides a commanding view of Makaha Valley to the north and Waianae Valley to the south.  After a quick lunch, I turned around to make my way back down the ridge to look for rare native plants. 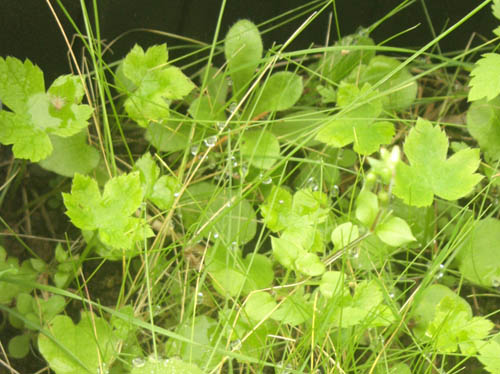 One of the endangered plants near the summit of Kamaileunu is sanicula meriversa, an endemic perenial herb in the parsley family that live on dry ridges in the Waianae Mountains of Oahu.  There are only 4 known populations of this exceedingly rare native Hawaiian plant. 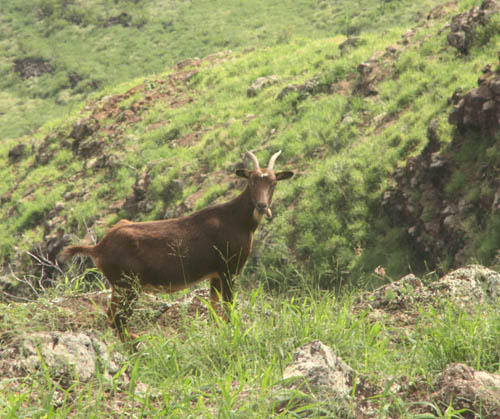 While hiking back down the steep slopes, I jealously watched a sure-footed goat scamper effortlessly down the mountain-side. With my feet pounding the uneven rocky terrain and my toes ramming against the front of my shoes with every downhill step, all I could manage was to trudge haltingly down the ridgeline. 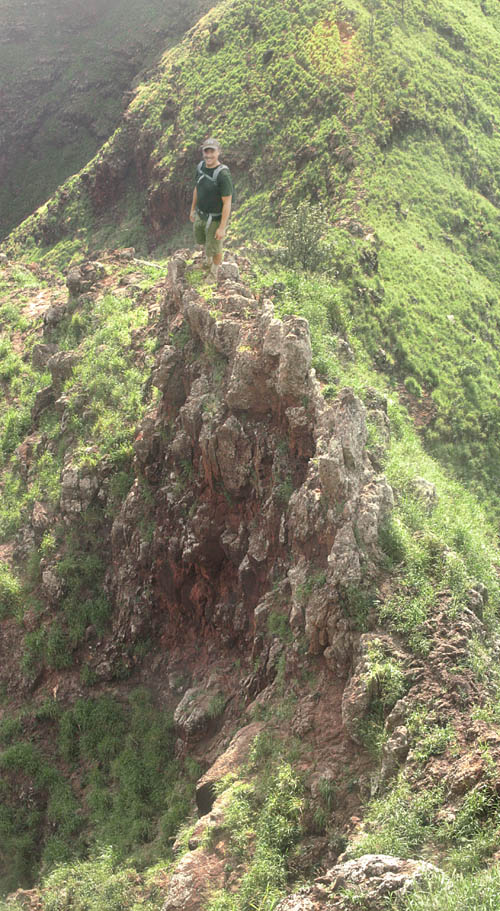 Whenever I reached a potentially dangerous section — like at the dike crossing in the photo above — I took extra care to watch my footing and balance.  Back in 2003, a HTMC hiker tripped on a treacherous section near the 3,000 foot section of the ridge and fell some 200-250 feet breaking multiple bones in his neck and elbow.  Fortunately, he survived the fall and has since completely recovered.

After I made my way across the grassy rolling hills, I descended steeply once again.  I was pleased when I reached  Kamaile Heiau again and descended the last 400 feet of elevation onto flat land.  Kamaileunu Ridge is a great hike that not only offers interesting archaeological sites, panoramic views of the Waianae Coast, and rare native plants, but provides a tough workout that builds hiking fortitude and endurance.