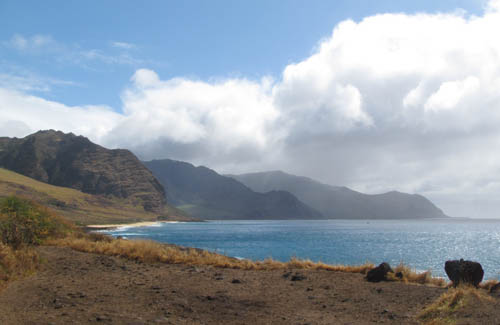 I hiked to Kaʻena Point from Keawaʻula (Yokohama Bay) to visit the western-most tip of Oʻahu at the beginning of hoʻolio — the rainy season in Hawaiʻi.

It was a rainy day and much of the island was covered with clouds as I drove towards Kaʻena Point — one of the driest parts of Oʻahu.  Only when I reached Makua Valley did the clouds open up to reveal nice blue skies.

Given that I had the beginnings of a cold, I was pleased to feel the warm sun as I pushed-off from the end of the paved road to hike on the old route taken by the OR&L train line to the north shore of the island. 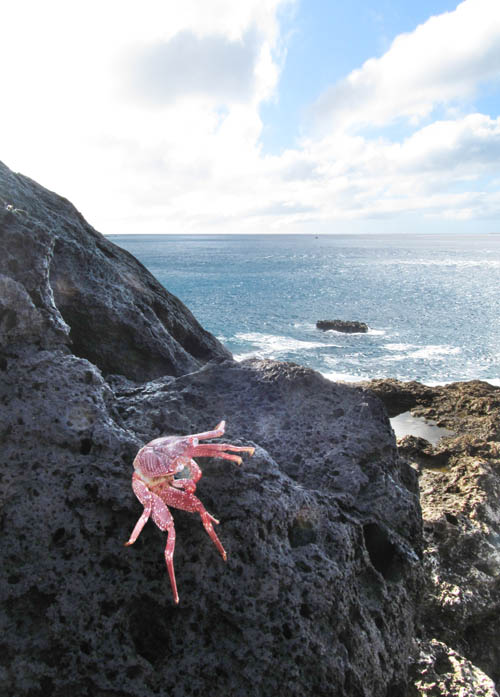 One of the more eye-catching sights on the rocks was the empty carapace of an aʻama crab which outgrew and shed its shell that turned red when exposed to the heat of the sun. 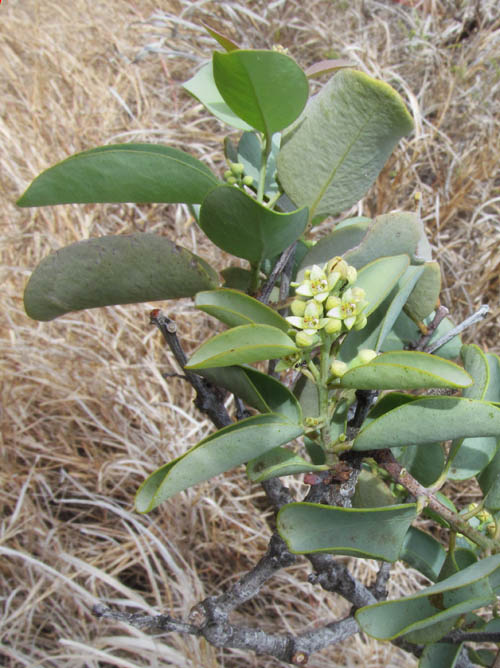 Another interesting sight was ʻiliahiʻole — the coastal sandalwood (Santalum ellipticum) — which was in bloom with small light green-yellow flowers.  With the rainy season just starting I noticed that while the landscape was still brown, a handful of plants were beginning to perk up to the new found moisture. 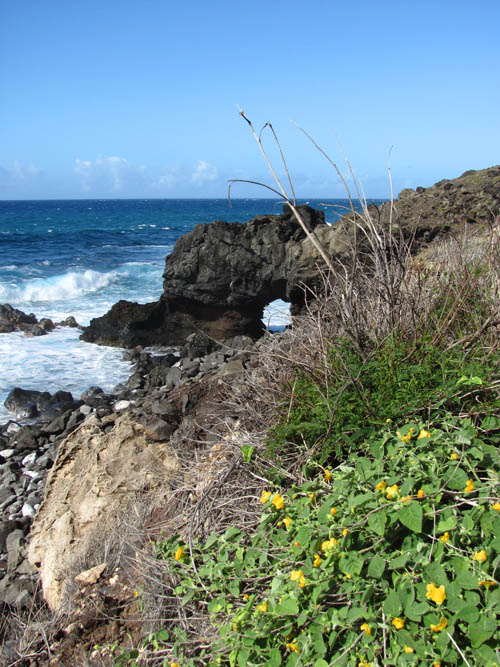 While passing the sea arch along the rocky coast I saw a number of ʻilima papa (Sida fallax) in bloom with yellow-orange flowers. 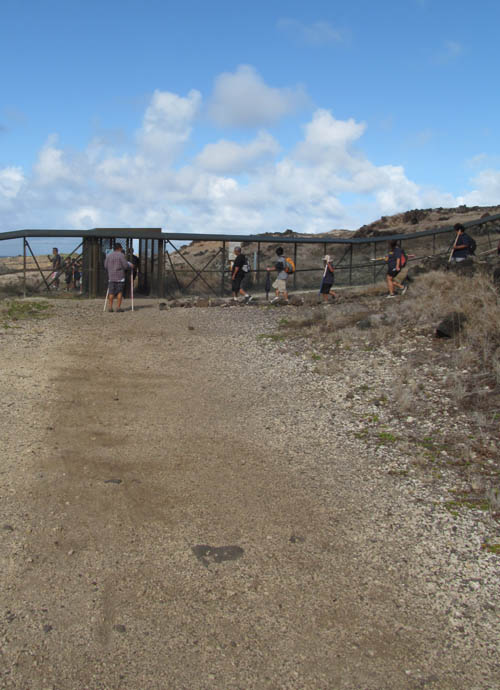 When I reached the the natural area reserve where the predator-proof fence has just been completed, I caught up with a group of Waiʻanae boy scouts some of who were visiting Kaʻena Point for the very first time. 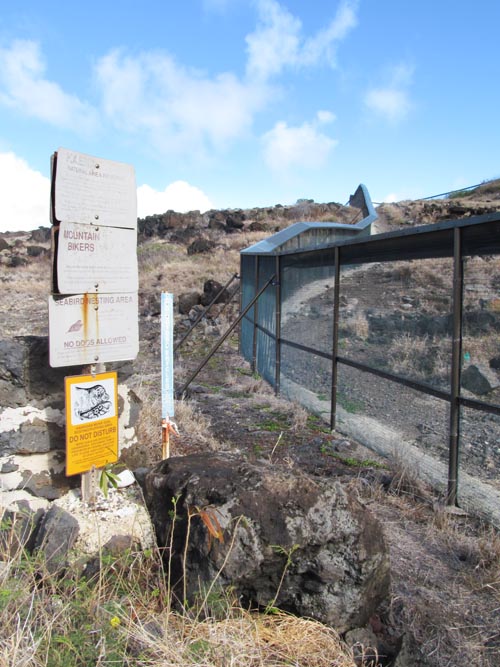 The fence is just under 7 feet high and stretches for about a mile to protect native sea birds and endangered plants on roughly 59 acres at the very tip of Kaʻena Point from dogs, cats, rats, and other predators. 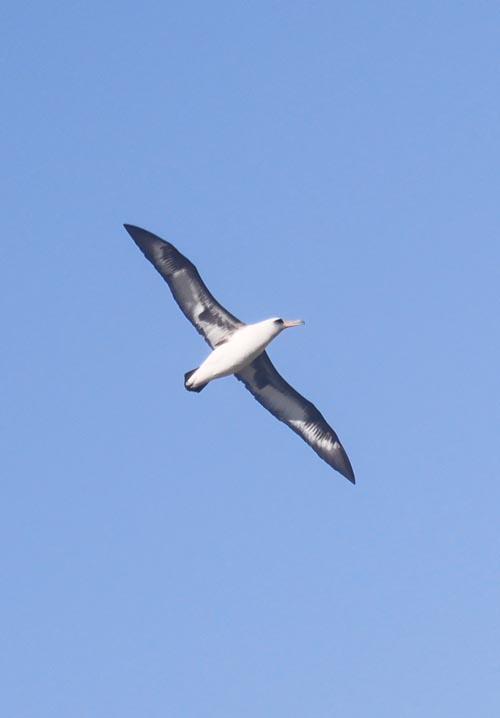 While making my way along the fence a curious moli or laysan albastross (Phoebastria immutabilis) flew overhead to check me out.  Albatrosses come to Kaʻena Point each year to nest and raise their young. 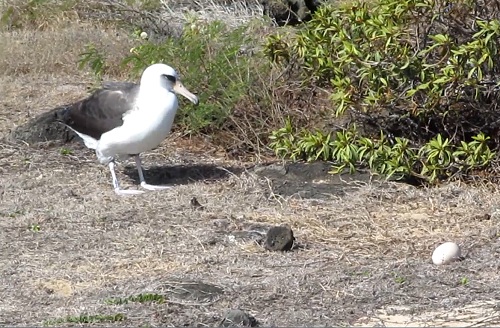 Due to predation, the moli population at Kaʻena Point had been limited to only about several dozen birds.  With the fence built just this year more chicks should be able to make it to adulthood and hopefully increase their numbers. 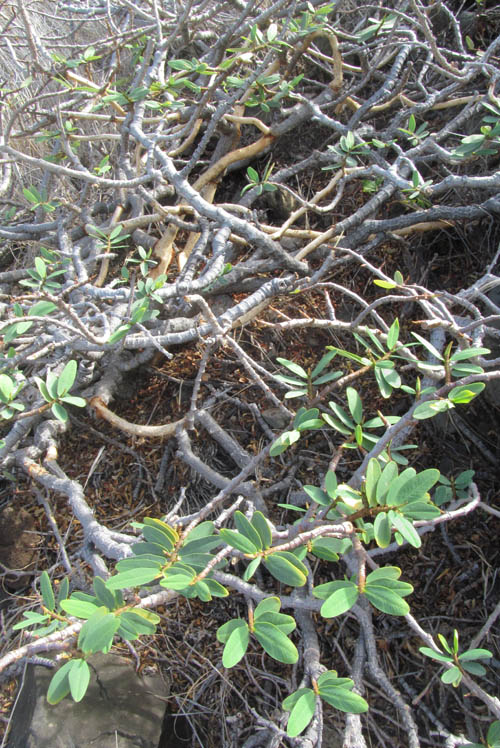 While making my way over the landscape I saw a rare form of ʻakoko (Euphorbia celastroides kaenana) that crawls prostrate over the ground.  This plant is endangered with only about 10 populations known on the island. 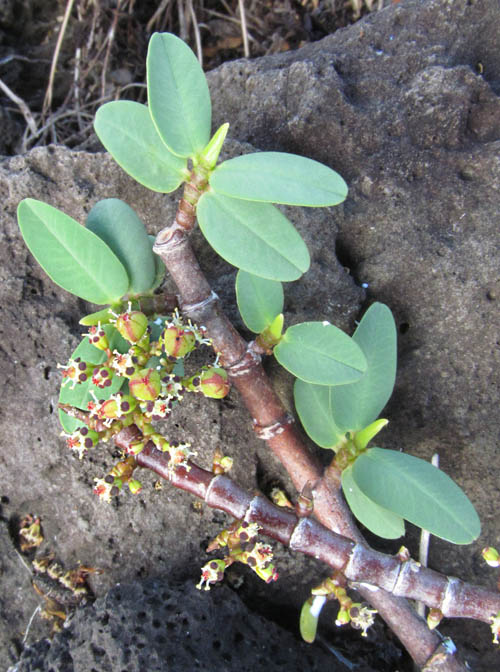 When I examined the plant up close, I was pleased to see tiny flowers and the beginnings of cute little fruit. 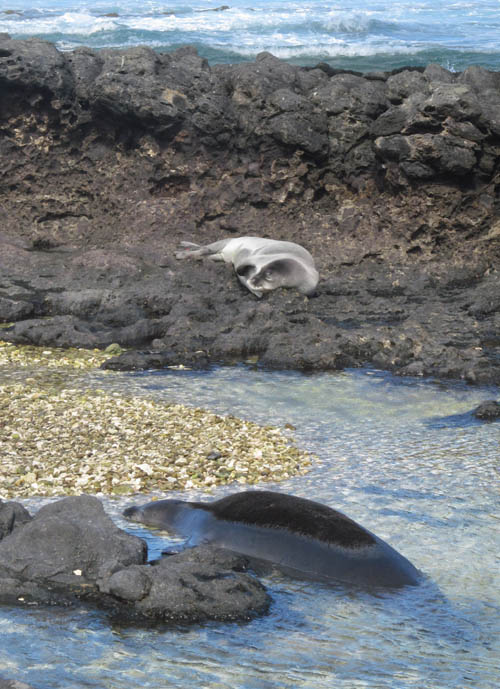 The Hawaiian monk seals are always a delight to see at Kaʻena Point.  I saw three seals (Monachus schauslandii) known in Hawaiian as ‘ilio holo I ka uaua — the dog that runs in rough water — in and around a series of tide pools at the tip of the point. 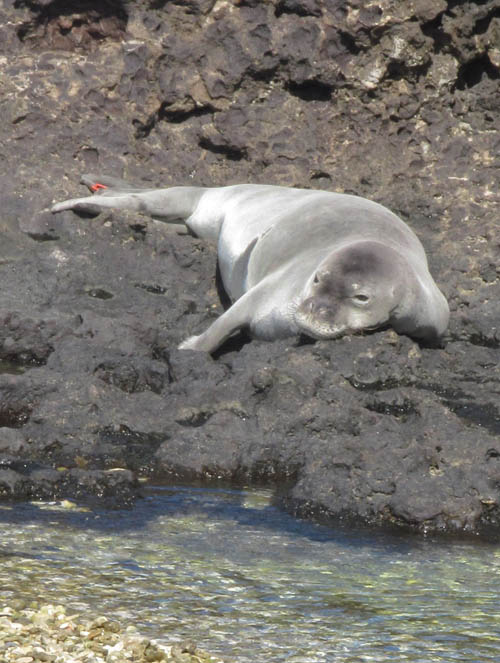 The seals looked so content and relaxed that I envied their daily routine in and along the tide pools — what a life!

Time flew by quickly and soon it was time to leave.  So I made my way out of the natural area reserve and retraced my steps back out the dirt road to Keawaʻula. 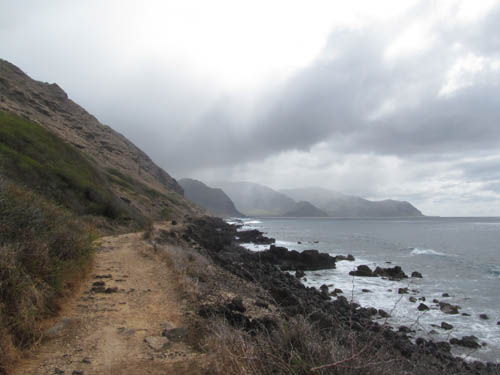 While making my way back on the dirt road, rain clouds blew and a light drizzle descended.  Within the next month or so, the big winter storms should begin drenching Kaʻena Point and turn the landscape from brown to green. Can’t wait to see the transformation!