I went on a backpacking trip in the Northern Wai’anae Mountains to help survey a population of endangered Oahu Tree Snails (Achatinella mustelina) — also known as “kahuli”, “pupu kuahiwi” or “pupukanioe” in Hawaiian — and to record the sounds they make.

According to Hawaiian tradition, kahuli sing.  Their very name — “pupukanioe” — means the “shell that sounds long”.  Several mele (traditional Hawaiian chants) talk about snails that “sing”, “chirp” or “whistle”.  One particular chant — “Kahuli Aku” — is about snails calling out to golden plovers to bring them water.  This mele was put to song by Winona Beamer and has become a popular children’s song.

Science, on the other hand, is dubious that they sing.  According to biologists, snails have no vocal chords, no ears, and insufficient lung capacity to sing.  Moreover, kahuli have been kept in captivity for decades and no one has heard them “sing”, “chirp”, or “whistle”. 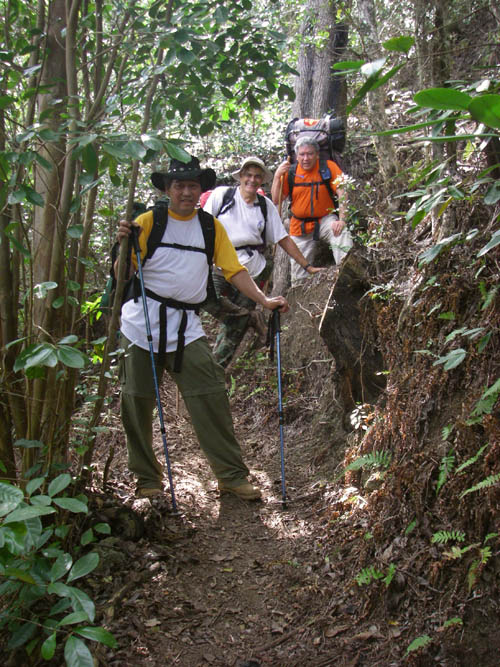 The snail recording team — shown in the photo above (Steve Young, Rex Williamson, and Robert Wai [leader of the team]) — would like to bridge the gap between tradition and science.  The team believes that the Hawaiians were keen observers of nature and theorize that the “singing”, “chirping”, or “whistling” of snails reported by the Hawaiians is a poetic metaphor for the sound made by snails when they glide over the surface of certain kinds of leaves. 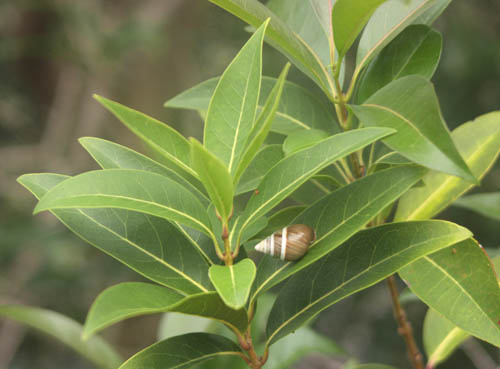 When we reached our destination at about 2,300 feet elevation, our first task was to find and count the kahuli in the immediate area.  We found many brown and white kahuli (Achatinella mustelina) — most of them about three-quarters of an inch long — on olopua (Nestigis sandwicensis), ohia (Metrosideros polymorpha), and strawberry guava (Psidium cattleianum) trees.  We also saw many tiny tornatellinid snails on the same trees — in the photo above, the tiny brown dot on the leaf immediately above the kuhuli is a tornatellinid snail. 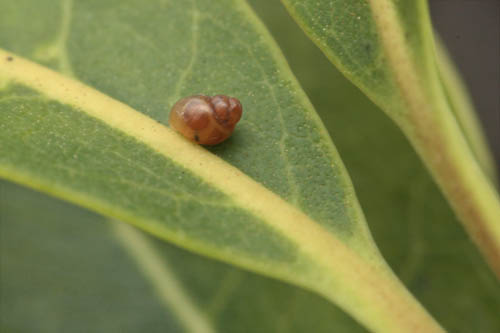 Tornatellinid snails are so tiny that I had to screw-on an additional lens at the very end of my macro lens to magnify the image even further — the snails are less than 2 millimeters long. 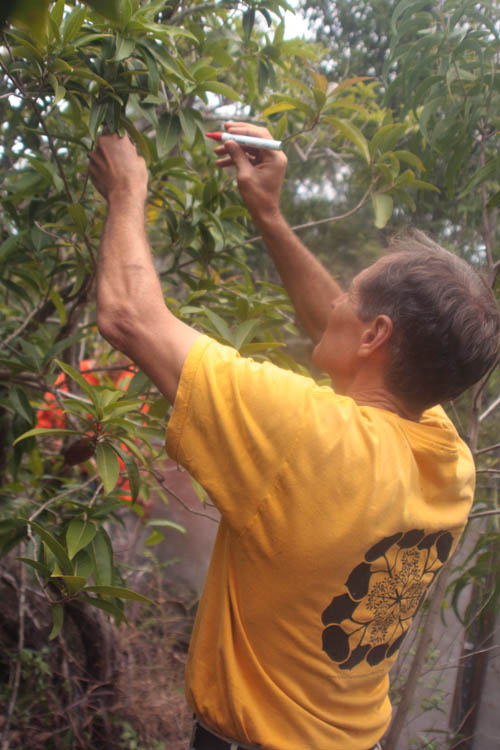 Whenever we found a snail, Vince Costello marked them with a red pen so that we would not inadvertently count them again.  We were thrilled to see well over a hundred snails in the immediate area.

When the sun set and darkness descended, the kahuli recording team sprang into action.  An ever so slight drizzle began to fall on our campsite and the snails began to stir from their daytime slumber. Using a Sony HDV video-recorder, Bob video-taped the movement of the snails. No artificial lighting was used to minimize disturbing the snails and night recording mode was used.

For the hour or so that we video-taped the snails, no sounds were recorded from the snails.  Additionally, no audible noise was heard or recorded as the snails glided over the surface of leaves.

After we ended our recording session and retired to our tents for the night we heard crickets chirping in the background.  Many biologists believe that the sounds made by crickets were mistakenly attributed to kahuli by the Hawaiians. 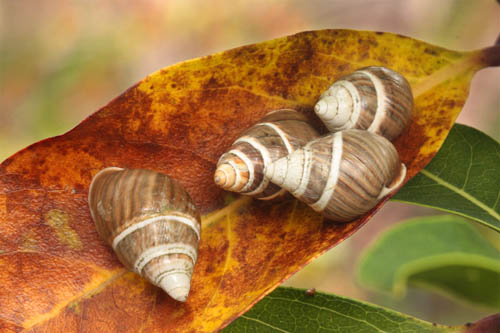 While we were disappointed that we did not hear the kahuli sing, we were comforted by the fact that the critically endangered kahuli in this area continue to thrive.  The snails at other sites are no where near this abundant.  I was also pleased to photograph a cluster of kahuli sleeping on an old olopua leaf mottled in a palette of orange, brown and yellow.

The team will regroup and retun to test alternative theories and make additional investigations.  Stay tuned for further developments.

Many thanks to Vince Costello and Kapua Kawelo of the O’ahu Army Natural Resources Program for taking us to this site and for making these investigations possible.