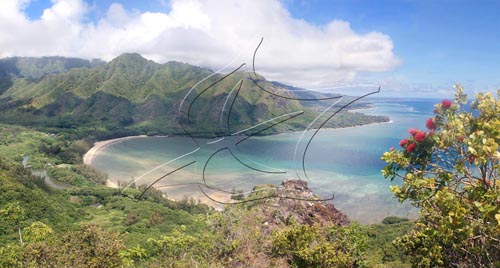 When I climbed to the top of Puu Manamana several weeks ago, I was so intrigued at the sight of Huilua Fishpond from several hundred feet up, that I had to return to the fishpond to explore it up close.

Huilua Fishpond is located on the shores of Kahana Bay at the mouth of Kahana Stream.  In the photo above, the rock walls of the fishpond extend from the shoreline into the bay.

Huilia fishpond is part of “Ahupua’a O Kahana” State Park and is readily accessible from Kamehameha Highway.  The fishpond encircles about 7 acres of the bay and is an interesting place to explore. 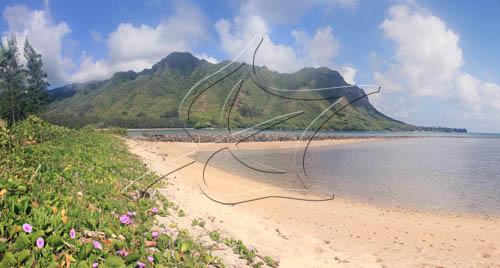 According to Hawaiian tradition, Hulua Fishpond was built by the menehune, the legendary original inhabitants of the Hawaiian Islands who were short in stature, which makes the fishpond very old. 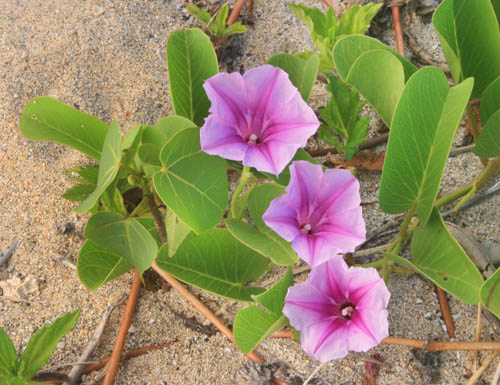 Purple pohu’ehu’e flowers thrive along the sandy shores of the fishpond.  Poheuehue (Ipomoea pes-caprae subsp. Brasiliensis) is the native beach morning glory which is indigenous to the Hawaiian Islands. 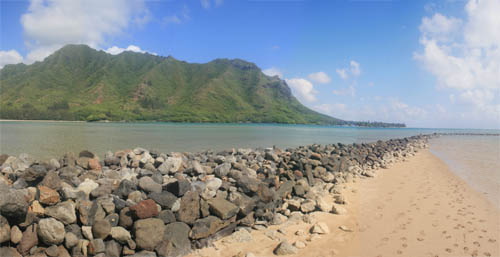 The rock walls are about 500 feet long.  The walls were originally 4 feet wide at the base stood 4 feet above the high tide, but several tsunamis in the past have damaged the walls and they are no longer their original size. 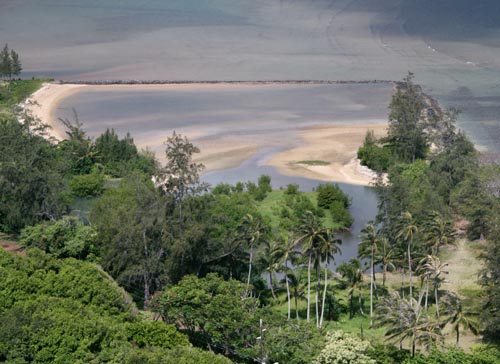 Huilua Fishpond is fed by a number of freshwater springs which makes the water brackish — a mixture of fresh and salt water.  In this photo taken from the Puu Manamana Trail, you can see freshwater from the springs flowing into the fishpond.  ‘Ama’ama (mullet) was the primary fish raised in Huilua Fishpond.

Historic Huilua Fishpond is a fascinating place to see how mullet was raised in old Hawaii and is well worth a stop to visit and explore.