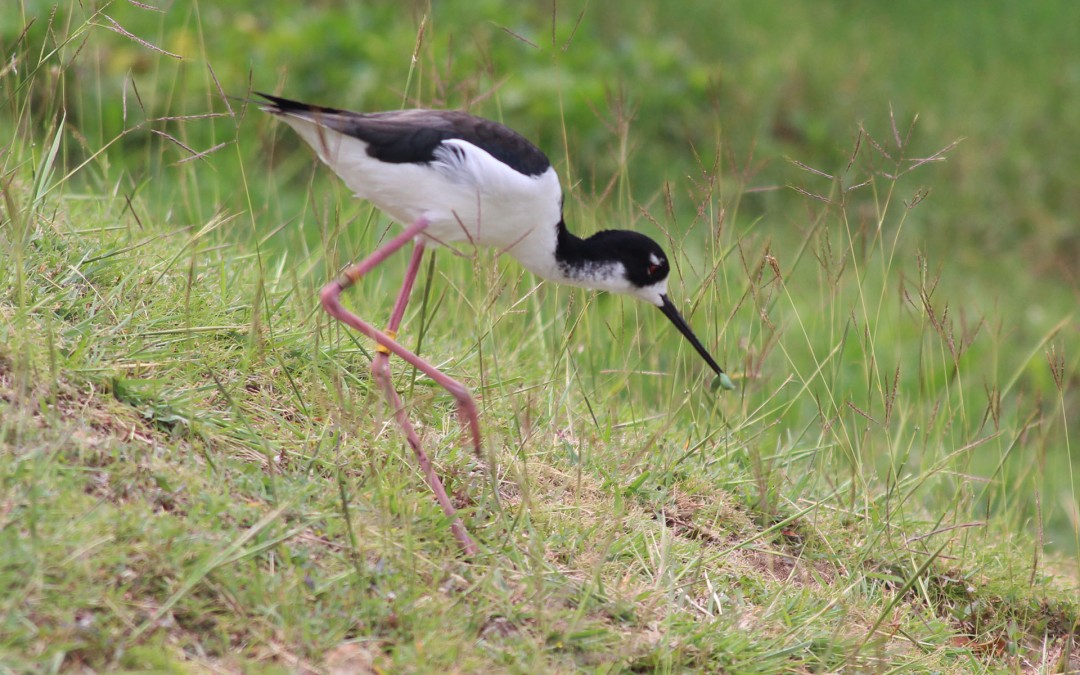 For the past several months I have been looking for Aeʻo or Hawaiian Stilts in the marshes and wetlands of windward Oʻahu.

The Hawaiian Stilt (Himantopus mexicanus knudseni) or Aeʻo in Hawaiian, is one of five subspecies of Black-Necked Stilt.  Eons ago, a flock of stilts found their way to the Hawaiian Islands, became isolated from others of their kind, and evolved into a distinct subspecies over the passage of time.  Aeʻo are on the federal list of endangered species and inhabit the shorelines, marshes, and wetlands of the larger main Hawaiian Islands. 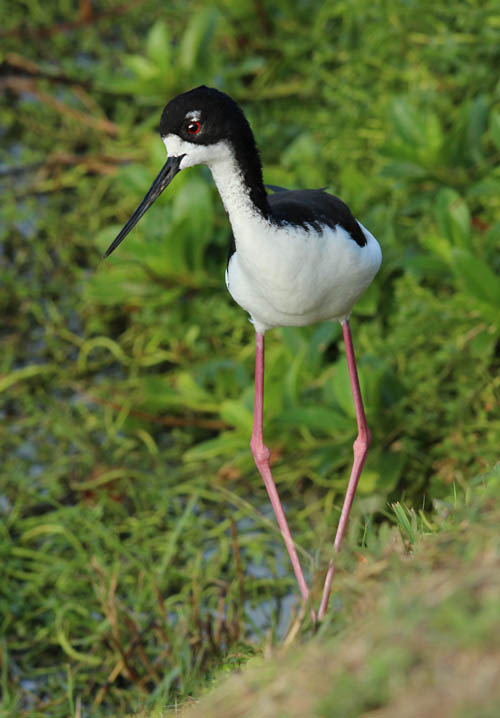 Hawaiian Stilts are graceful waterbirds with long slender legs — pink in color — which they use to wade in water.  The birds grow up to 15 inches long and stand about 20 inches high.  The underside of the bird is white and the topside is black – except for females whose backs are brown in color.

Aeʻo can be found on the main Hawaiian Islands except Lanaʻi and Kahoʻolawe. Their numbers have varied between 1,100 and 1,783 between 1997 and 2007, according to state biannual waterbird survey data, with Maui and Oʻahu accounting for 60-80% of them. 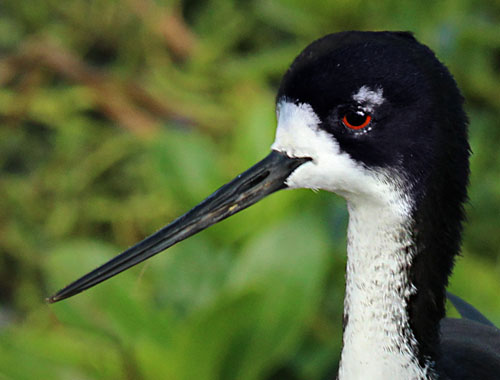 The Hawaiian subspecies differs from its North American cousin by having more black on its face and neck, and a longer bill, tarsus, and tail. 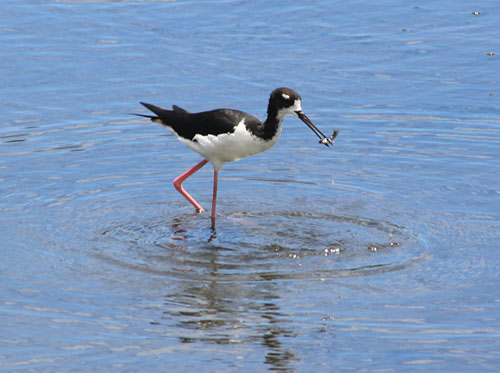 The birds feed in shallow bodies of water hunting a variety of fishes,  crabs, worms, and other aquatic invertebrates. 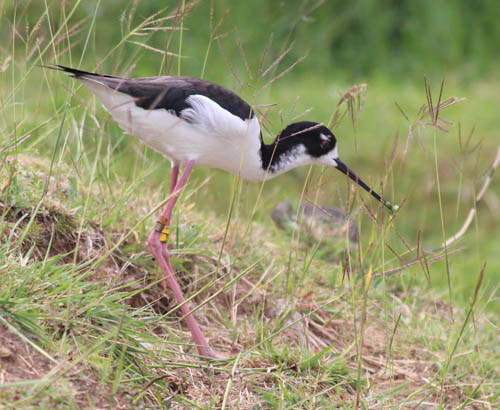 The birds also hunt on land for insects, caterpillars, and other little critters to eat. 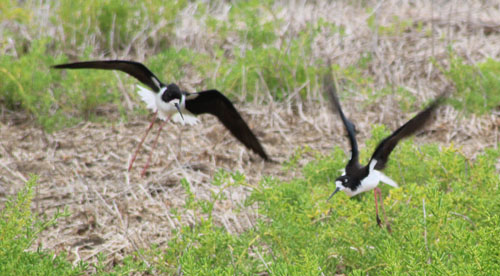 Aeʻo are amazing to watch as they fly over the marsh.  The birds are fast and agile in flight. 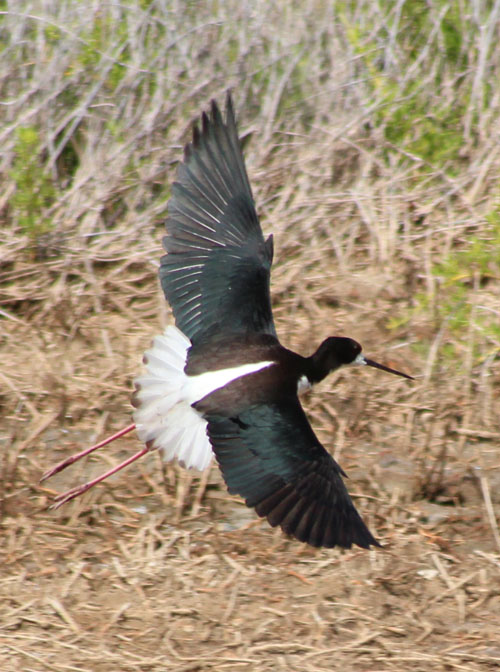 One of the more eye-catching sights is when the birds drop their tails down and flap theirs wings to slow their air speed just before they land. 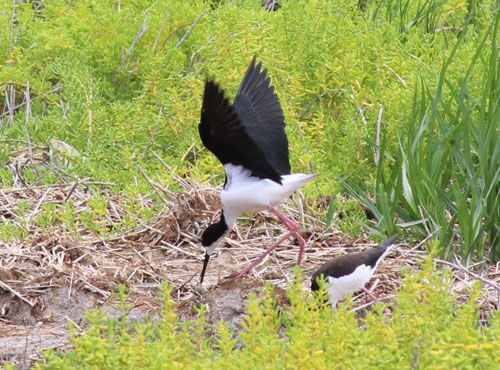 Nesting season is between March and August and peaks in May and June.  You can tell its breeding season when they build nest mounds and jostle each other for mates. 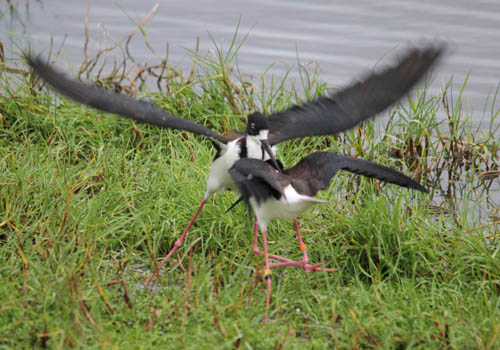 Earlier this year I witnessed two females fighting — females have brown backs — with each other for mates. 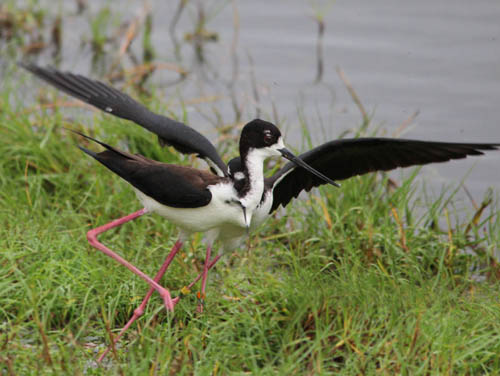 One female actually got its beak around the neck of the other as they fought each other for the chance to mate. 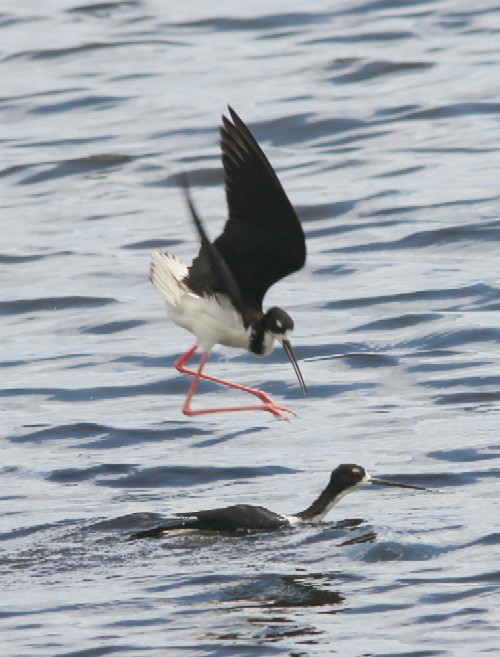 Males fight each other too.  I managed to catch a male sneak attack a rival from above. 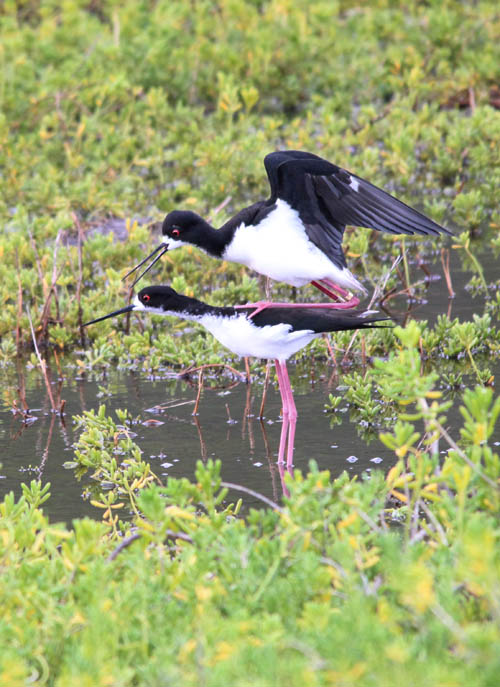 Once males and females pair up, they mate and lay eggs.  Aeʻo generally lay three to four eggs which hatch about 24 days latter.  Both parents incubate the eggs. 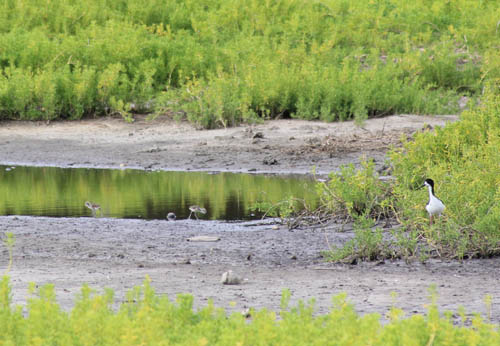 Hawaiian Stilts aggressively defend their nests and hatch-lings — which can be seen along the edge of the pond. 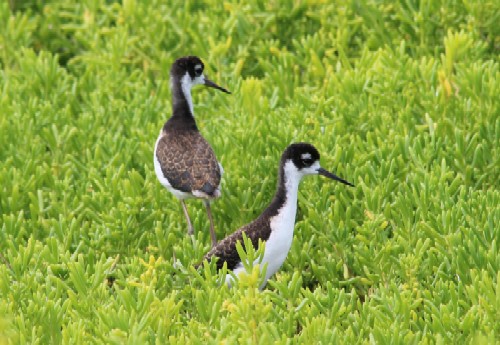 Both parents catch food and the chicks grow rapidly.  One of the coolest sights was watching the chick stretch and try out its cute little wings. 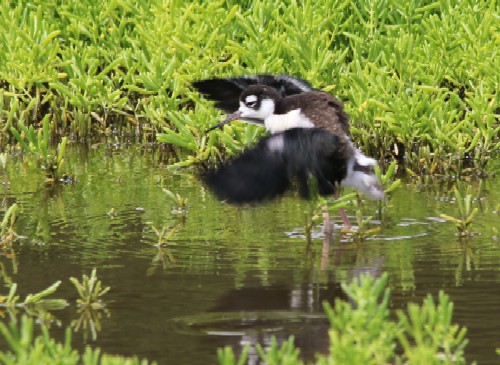 Chicks learn how to hunt from their parents and fledge by the end of summer.  May and June are at the peak of breeding season so keep your eyes open in the marsh!

Aeʻo or Hawaiian Stilt, Division of Forestry and Wildlife, Department of Land and Natural Resources, State of Hawaii