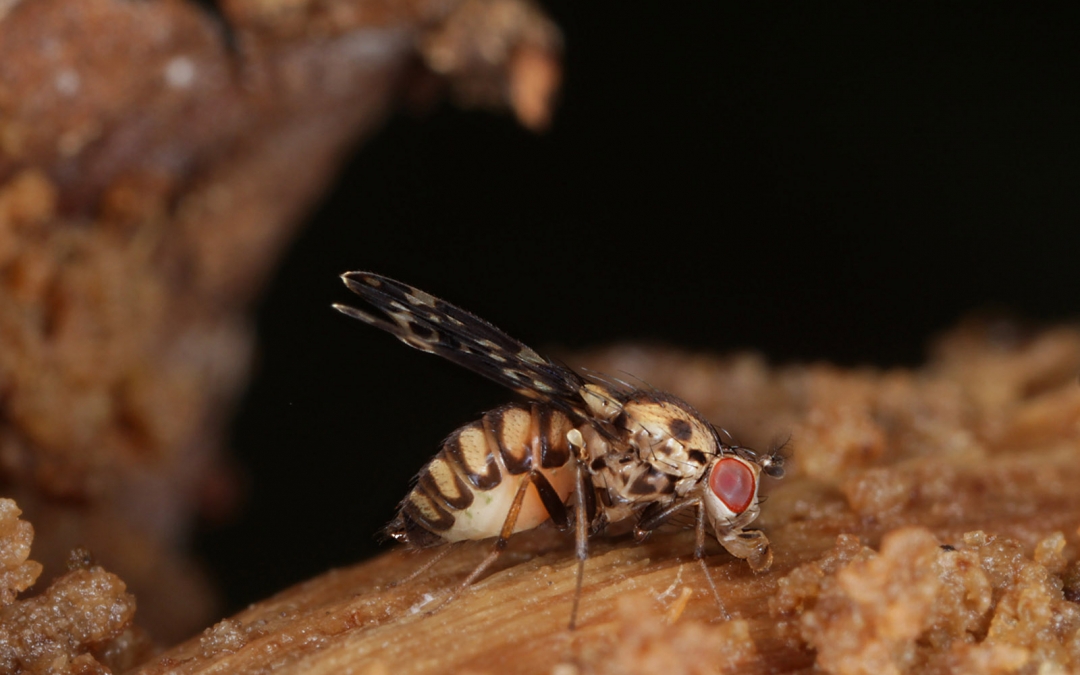 One of the fascinating insects in Hawaiian entomology is the Drosophila Fly.  Over 800 species evolved in the Hawaiian Islands — the largest known radiation of any insect on an oceanic island. 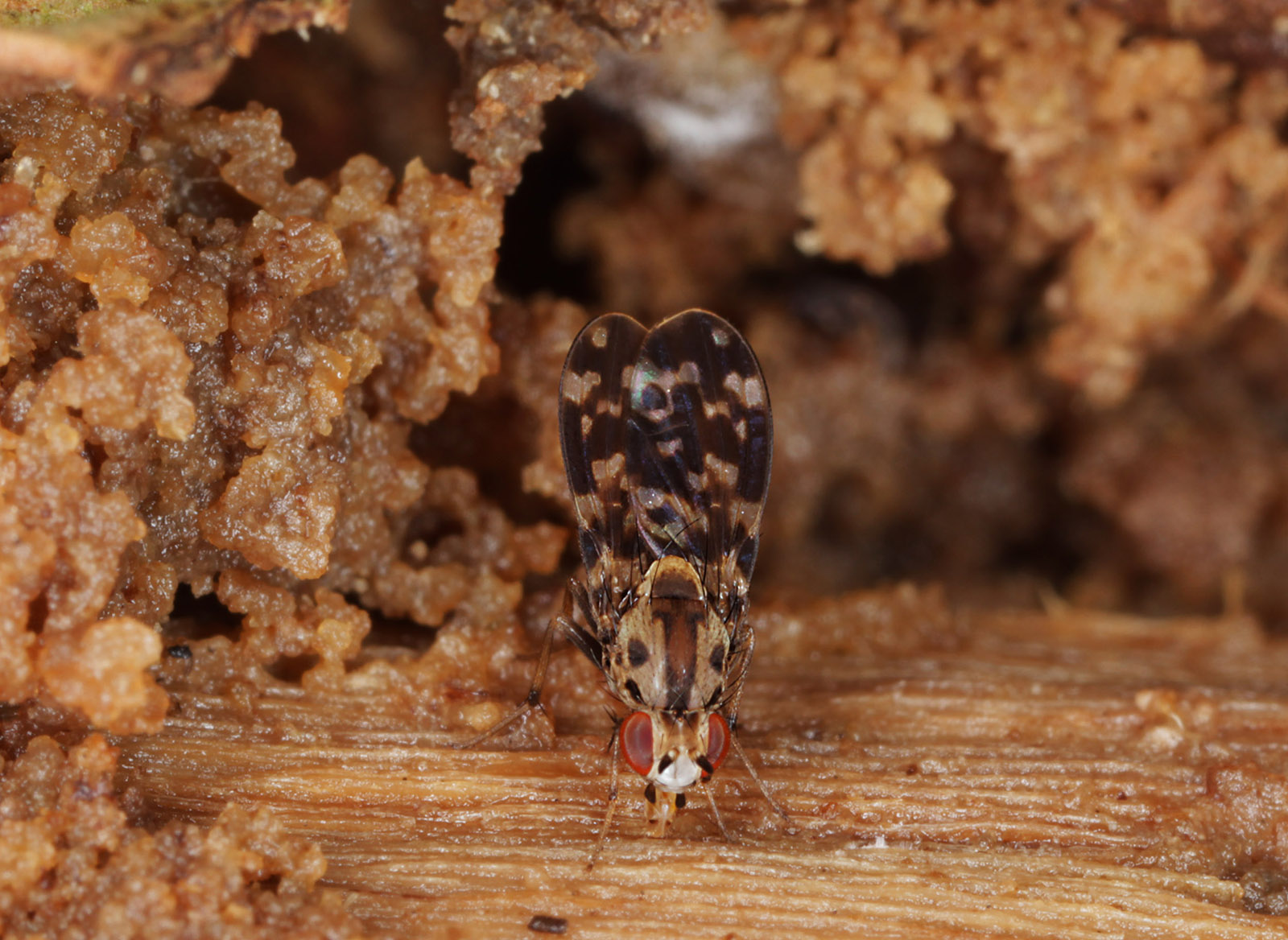 Different species range in length from less than 1.5 millimeters (a sixteenth of an inch) to more than 20 millimeters (three-quarters of an inch) and their heads, forelegs, wings, and mouth parts have very different appearances and functions. The approximately 800 drosophila species endemic to Hawaii belong to two genera—Drosophila and Scaptomyza.  106 of these are in the Hawaiian picture-wing group which have elaborate markings on their wings specific to each species. They are also known for elaborate courtship displays and territorial behaviors. 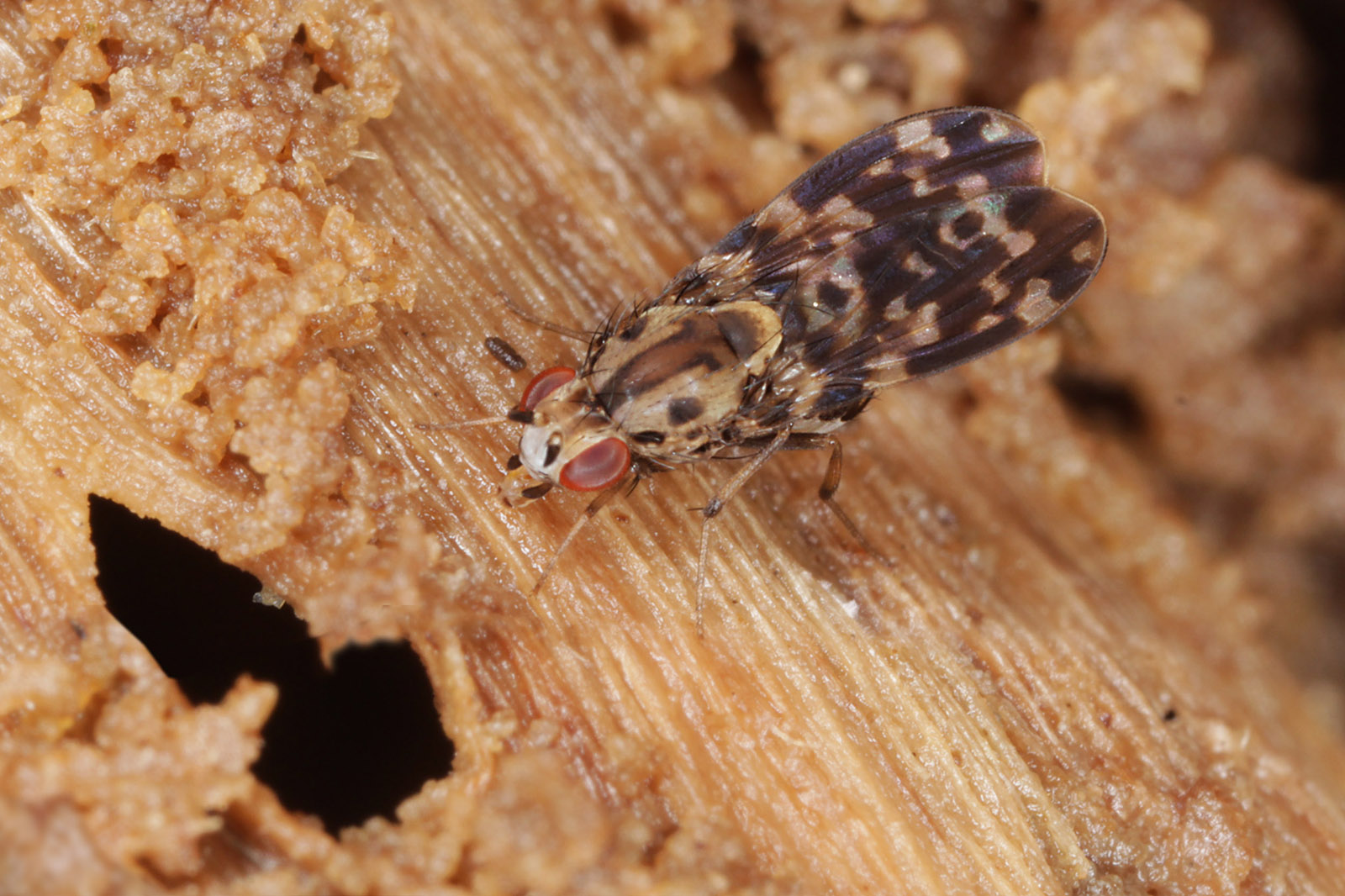 I was lucky to hike with entomologist Steve Montgomery in the Waiʻanae Mountains who discovered a number of previously unknown insects endemic to Hawaiʻi.  When we reached an outplanting of Cyanea superba, Steve saw several downed trees and looked for the flies on the wood.  Steve told me that drosophila flies evolved into an impressive array of forms with different mouth parts that feed on different host plants and/or plant parts.  I was thrilled when he found Drosophila crucigera!  The fly was about 4 millimeters in length — just under a quarter inch. 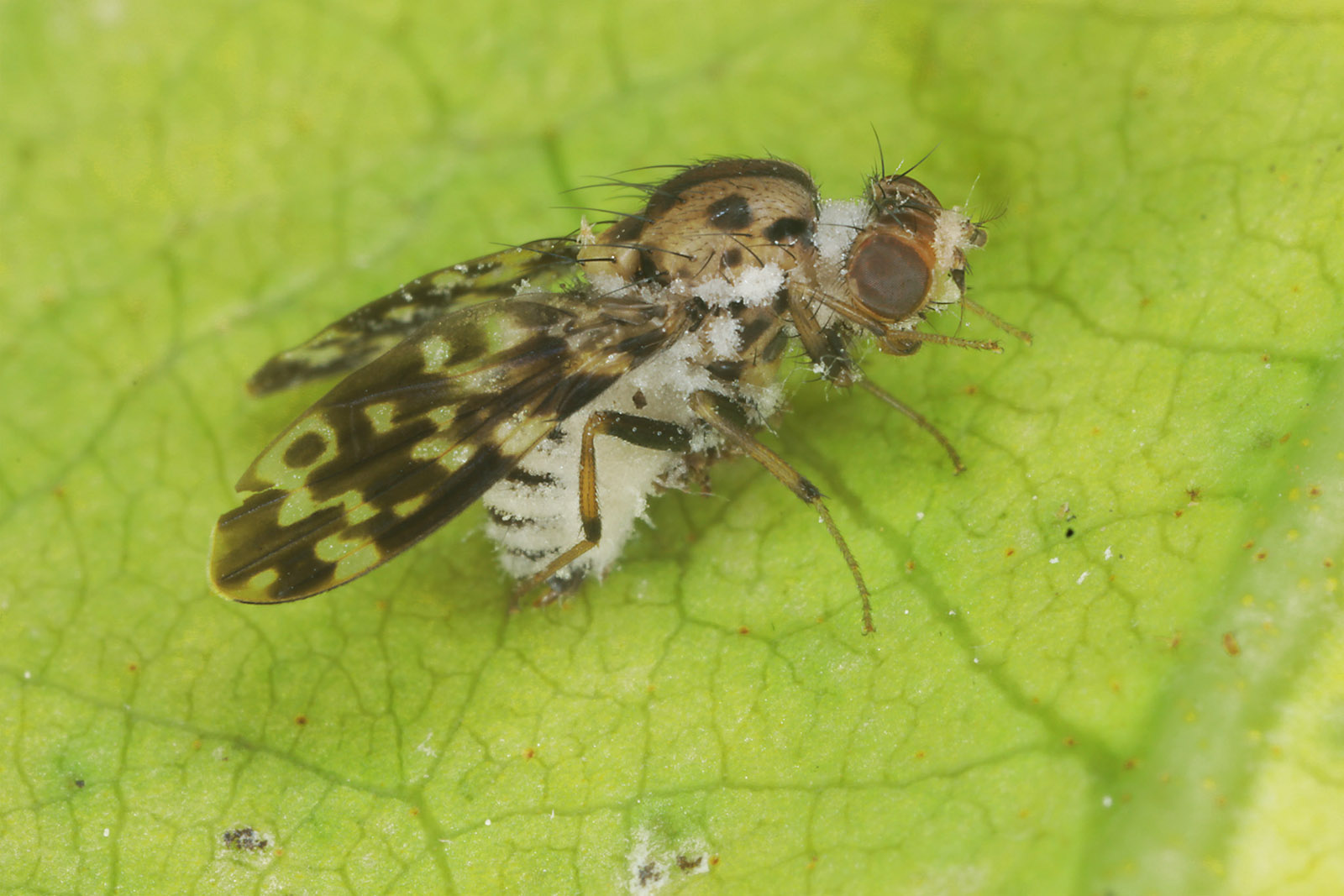 I was spell-bound as Steve showed me the crucifix like pattern on the wings which gives the fly its name — crucigera.  If you look closely on the wings of this dead fly with fungi growing on it you can see a crucifix next to a dot. Steve explained that some species of picture-wing flies feed exclusively on certain flowers or on a single tree but that D. crucigera is a generalist that feeds on the decaying tree bark of a number of different native trees. 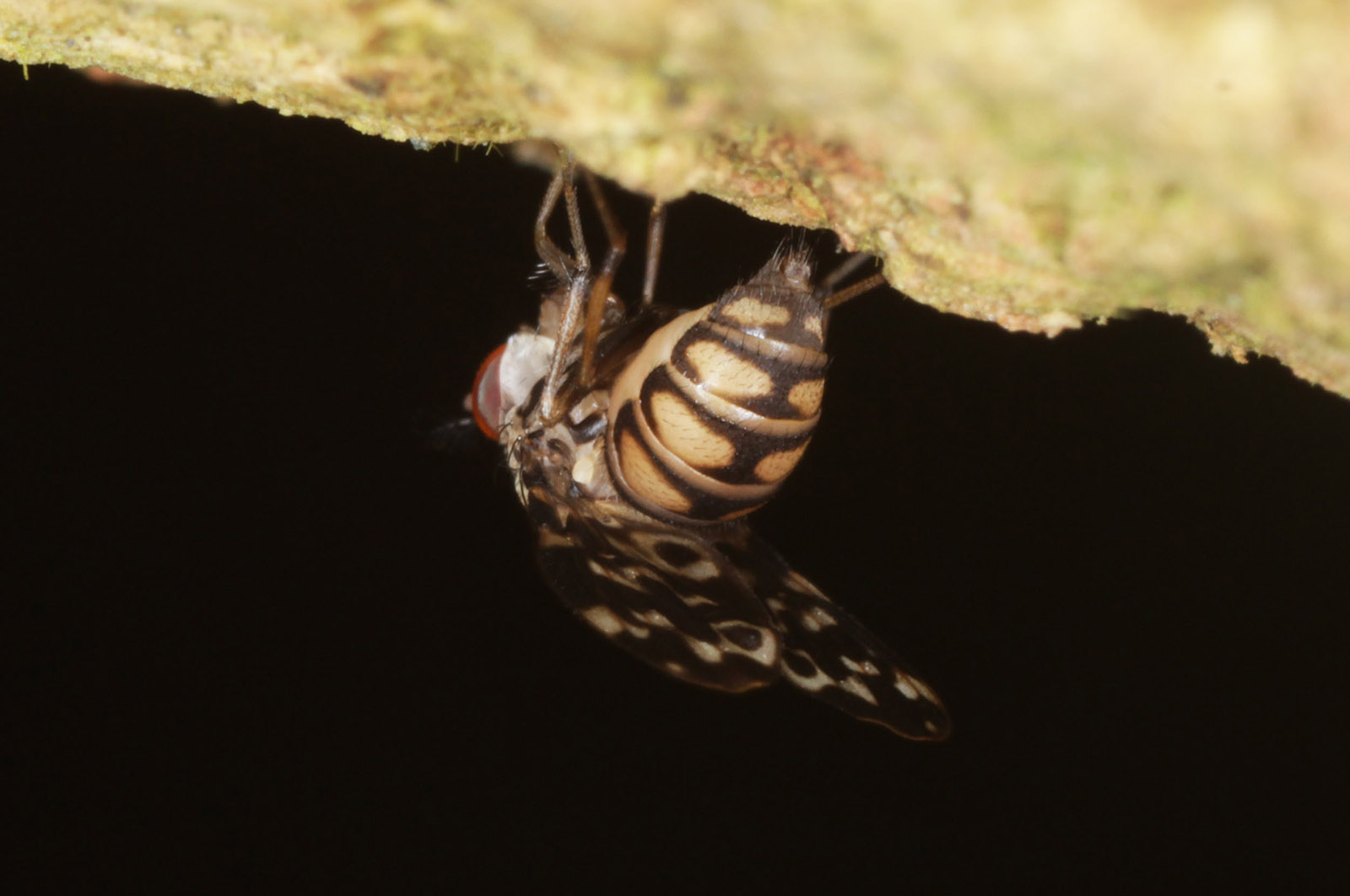 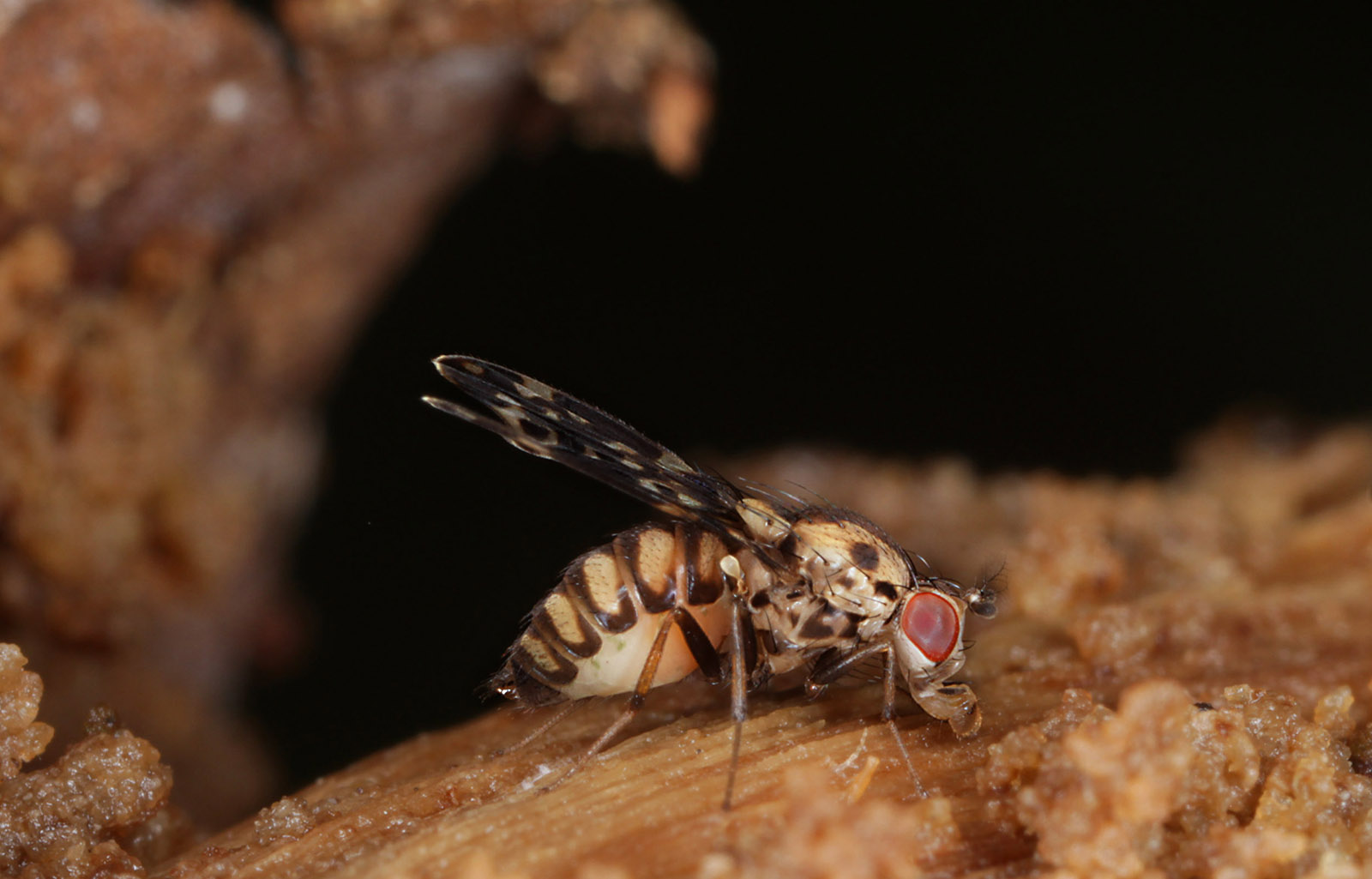 I was thrilled to watch and photograph the fly use its extended mouth parts to suck the juices of the decaying tree bark and to learn the natural history of drosophila flies in the Hawaiian Islands.  What a fascinating insect!

A Database of Wing Diversity in the Hawaiian Drosophila

Evolution in Hawaii: A Supplement to ‘Teaching About Evolution and the Nature of Science’ (2004)