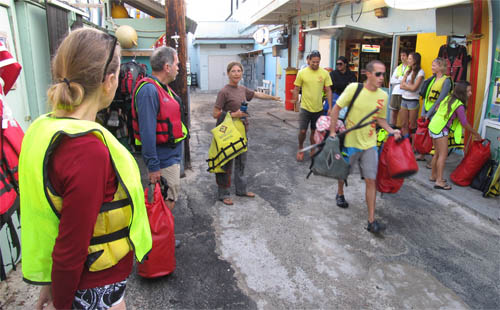 I kayaked to Mokulua Iki — the smaller of the two islets offshore from Lanikai and Kailua — to help restore the native habitat for seabirds.

When I learned from the Hawaii Audubon Society that the Division of Forestry and Wildlife (DOFAW) at the Department of Land and Natural Resources (DLNR) were restoring the Mokulua Islets I had to go!  The Hawaiʻi Audubon Society is involved in because the islets are nesting sites for wedge-tail shearwaters and are crucial to their future in Hawaiʻi.

We met at Kailua Sailboards & Kayaks which provided volunteers with kayaks to paddle to the island.  State Seabird Biologist, Amarisa Marie (in brown), briefed us on the plan to remove invasive haole koa shrubs — before the birds come back for nesting season in March. 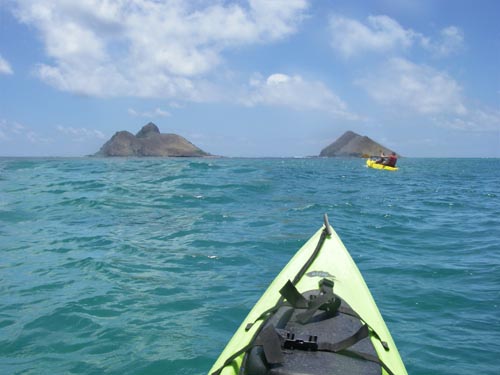 The staff at Kailua Sailboards & Kayaks made sure we were all okay paddling over to the Mokulua Islets which are about three-quarters of a mile offshore.  Our goal for the day was the smaller of the two islets — Mokulua Iki — which is located on the right. 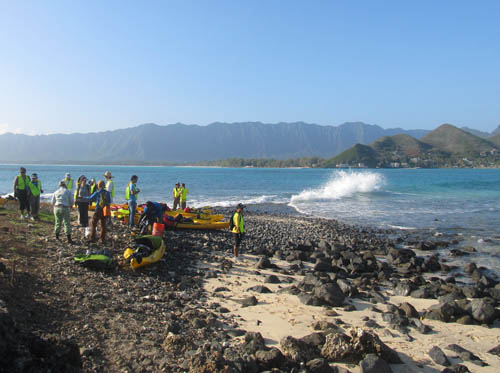 Conditions were great for kayaking — there was no strong current or wind and we made it over the Mokulua Iki without incident.  One of the more unusual sights were the waves which wrapped around the island and collided with each other sending a spray of water upwards. 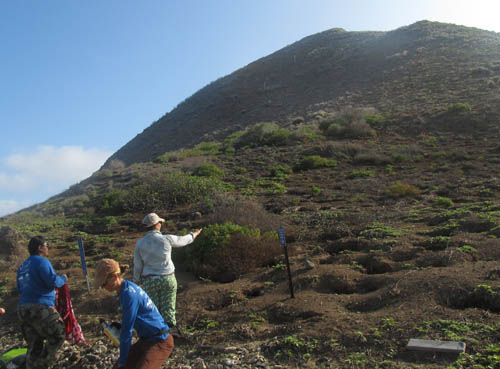 Shearwater burrows were excavated throughout the island and we had to watch our steps to avoid stepping into and collapsing them.  15 service trips were made the previous year and nearly half the invasive plants were removed.  Many more are planned this year to complete the task.

One of the vantage points provided a great view of the companion offshore island of Mokulua Nui with Mokapu Peninsula — where Kaneʻohe Bay Marine Air Corps Base is located — far off on the horizon. 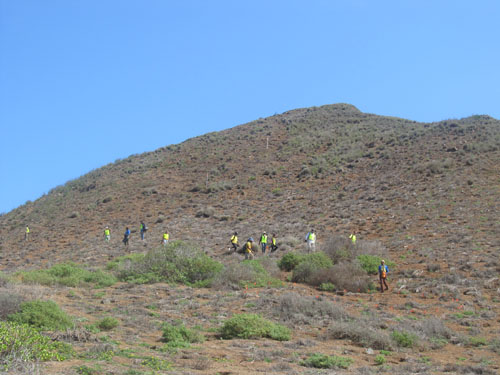 We made our way up and around to the a section of the island over-run by invasive haole koa shrubs no more than a few feet high. 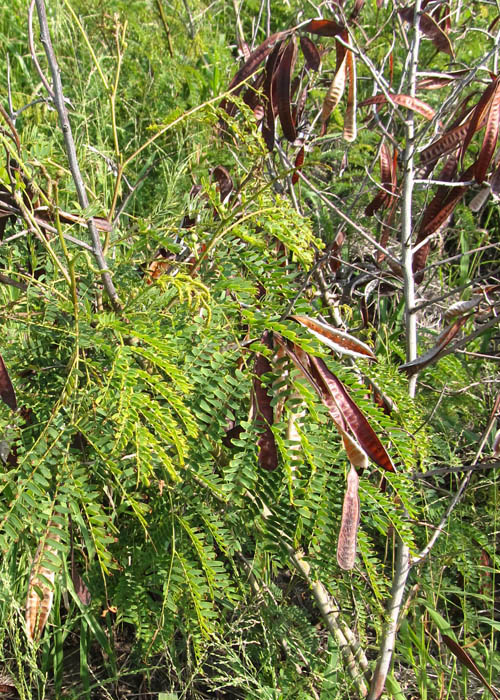 Haole koa (Leucaena leucocephala) is a fast growing invasive plant that produces brown pods with many seeds.  First we picked and removed all the seed pods to prevent them from spreading and germinating. 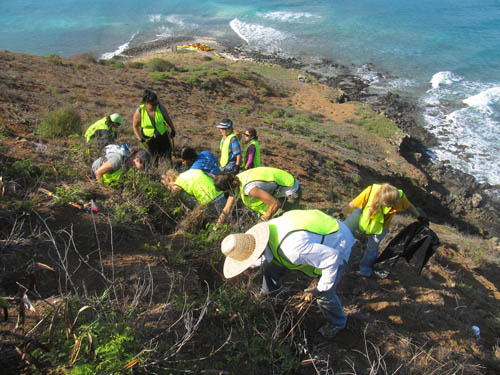 We pulled the shrubs out by the root where possible.  But some were too deeply rooted so we cut their branches with loppers and hand saws. 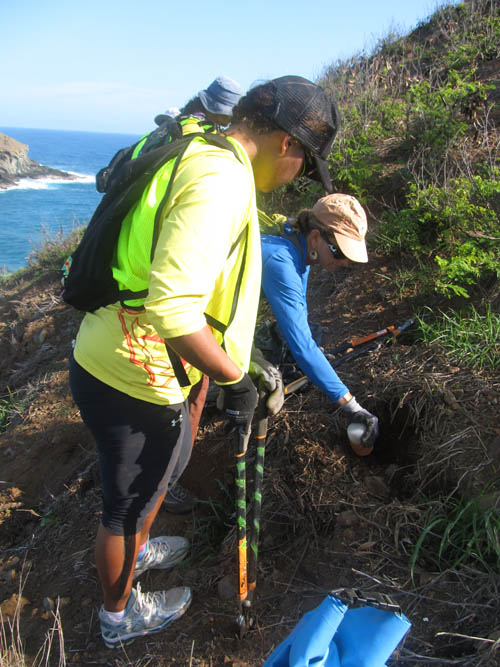 Amarisa applied herbicide to poison and kill the remaining plant in the ground.  We worked for about 3 hours and made our way up to the summit of the islet. 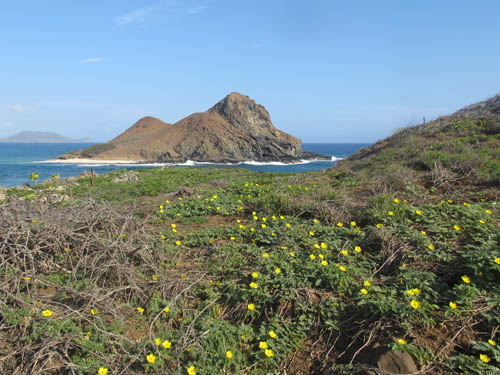 The recent winter rains caused many of the indigenous plants to burst into bloom. 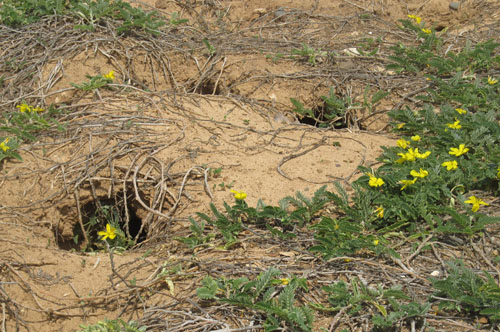 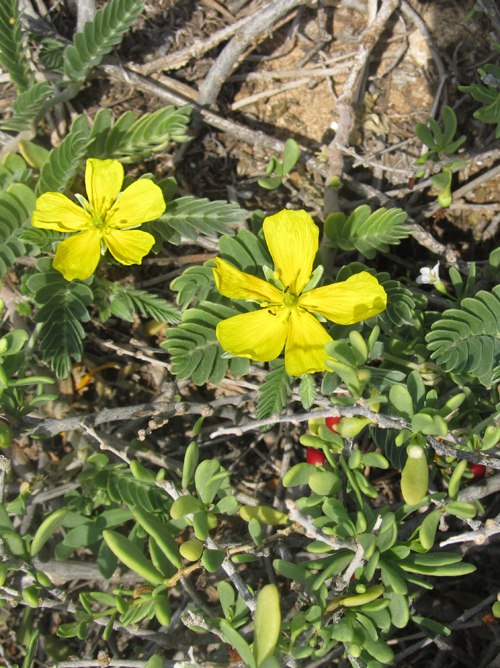 We saw ants on the flowers of nohou, ohelo kai and ilima.  Invasive ants are a problem on the island and interfere with the ability of the seabirds to raise their offspring. 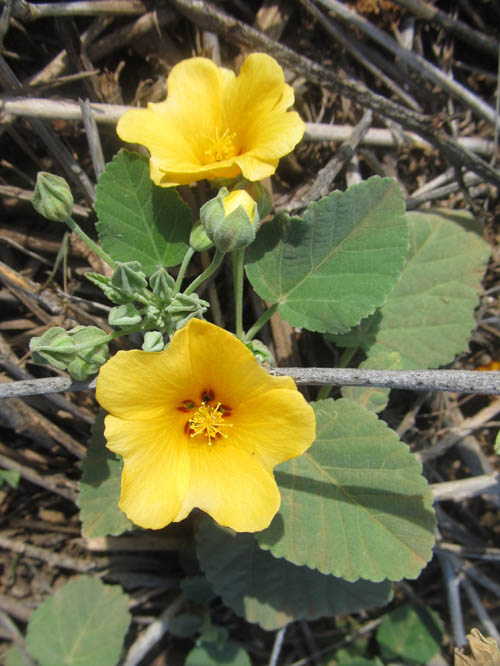 Time passed quickly as I admired the islet and soon it was time to leave.  I cannot wait to return to see the island restored to is natural state dominated by native vegetation and sea birds. If anyone would like to join in this project and visit these islets check out these links.