Cyanea humboldtiana in the Koʻolau Mountains 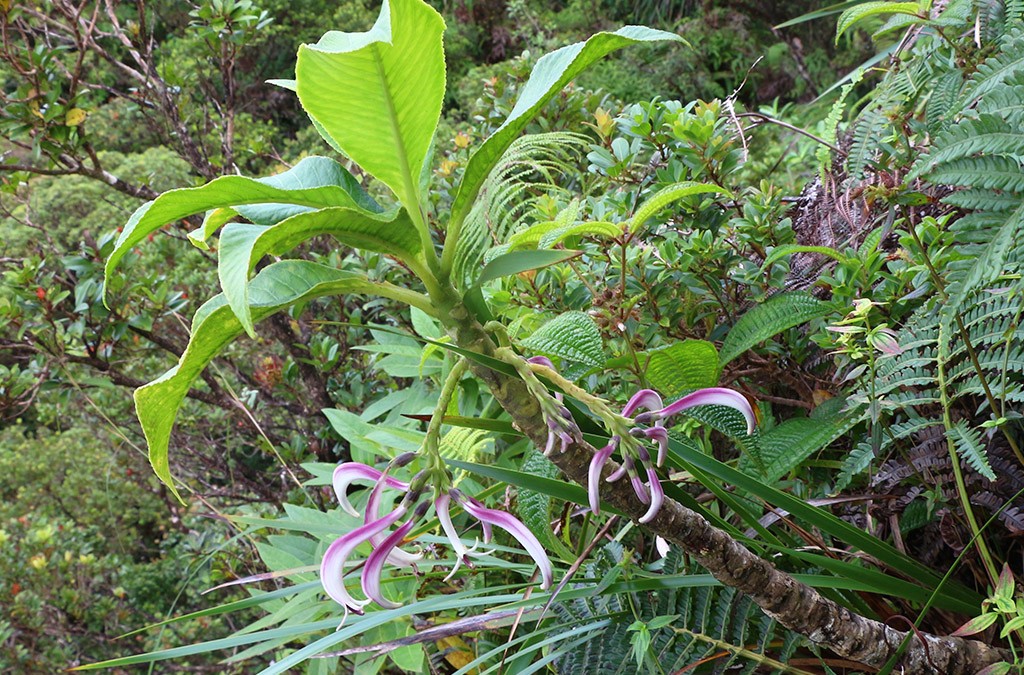 One of the rare flowers found only on the island of Oʻahu is Cyanea humboldtiana.

Cyanea humboldtiana is endemic to the Koʻolau Mountains of Oʻahu and is known as the Koʻolau Rollandia.  Rollandia was once a separate genus under the Hawaiian Lobeliad Group but genetic studies showed that Rollandia and Cyanea form a monophyletic group.  So all the species formerly classified under Rollandia were renamed Cyanea.  Haha is the generic Hawaiian name for Cyanea. 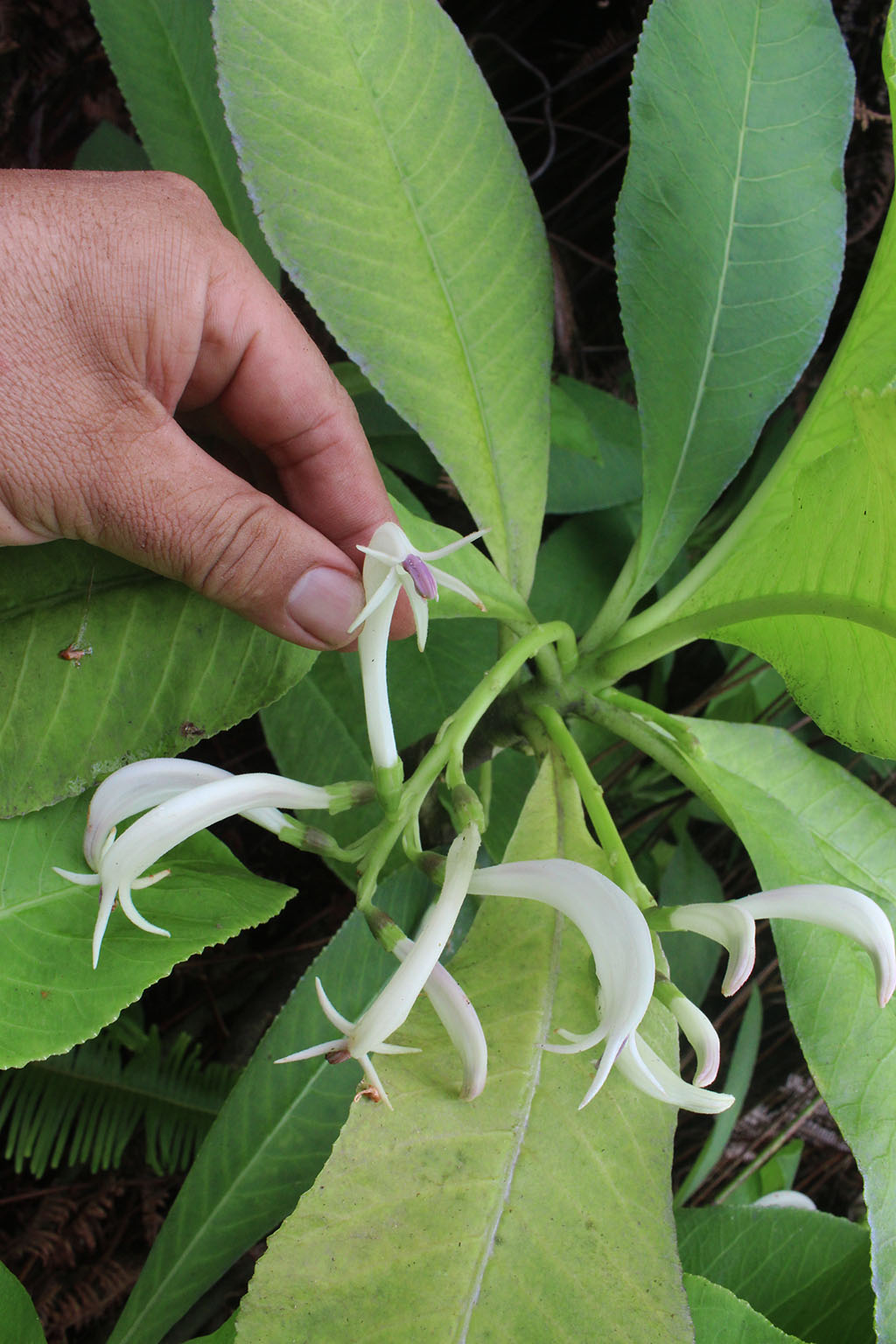 Cyanea humboldtiana grows as a small bush several feet high with broad leaves with serrated edges.  Curved tubular flowers about 3 inches long dangle from under the leaves.  The flowers can be white (most common color), magenta-purple, or white and magenta-purple. 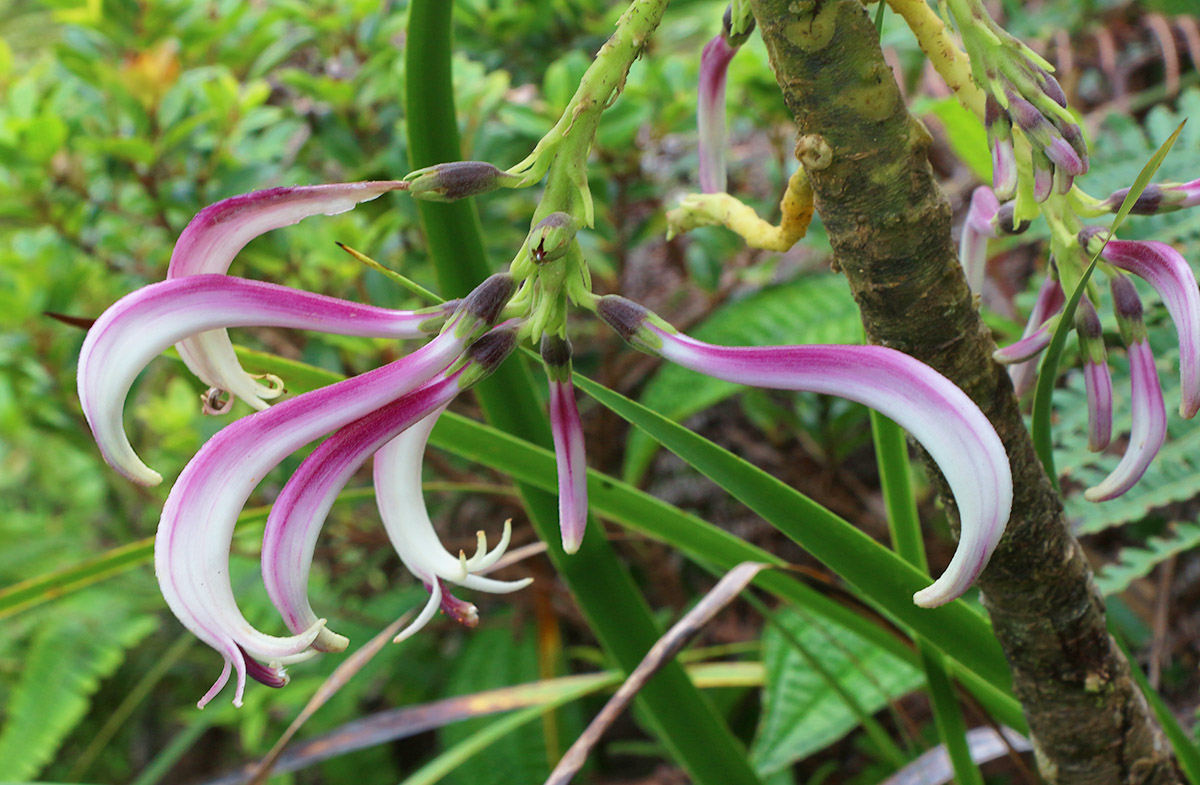 The plant was discovered in 1839 by Gaudichaud during his second voyage to the Hawaiian islands on the ship “La Bonite”.  Historically, Cyanea humboldtiana is known from only 17 populations in the Koolau Mountains.  In 2003, when critical habitat was designated for the plant, only 239 plants were still around in 9 populations.  The plant is rare and is on the federal list of endangered species. 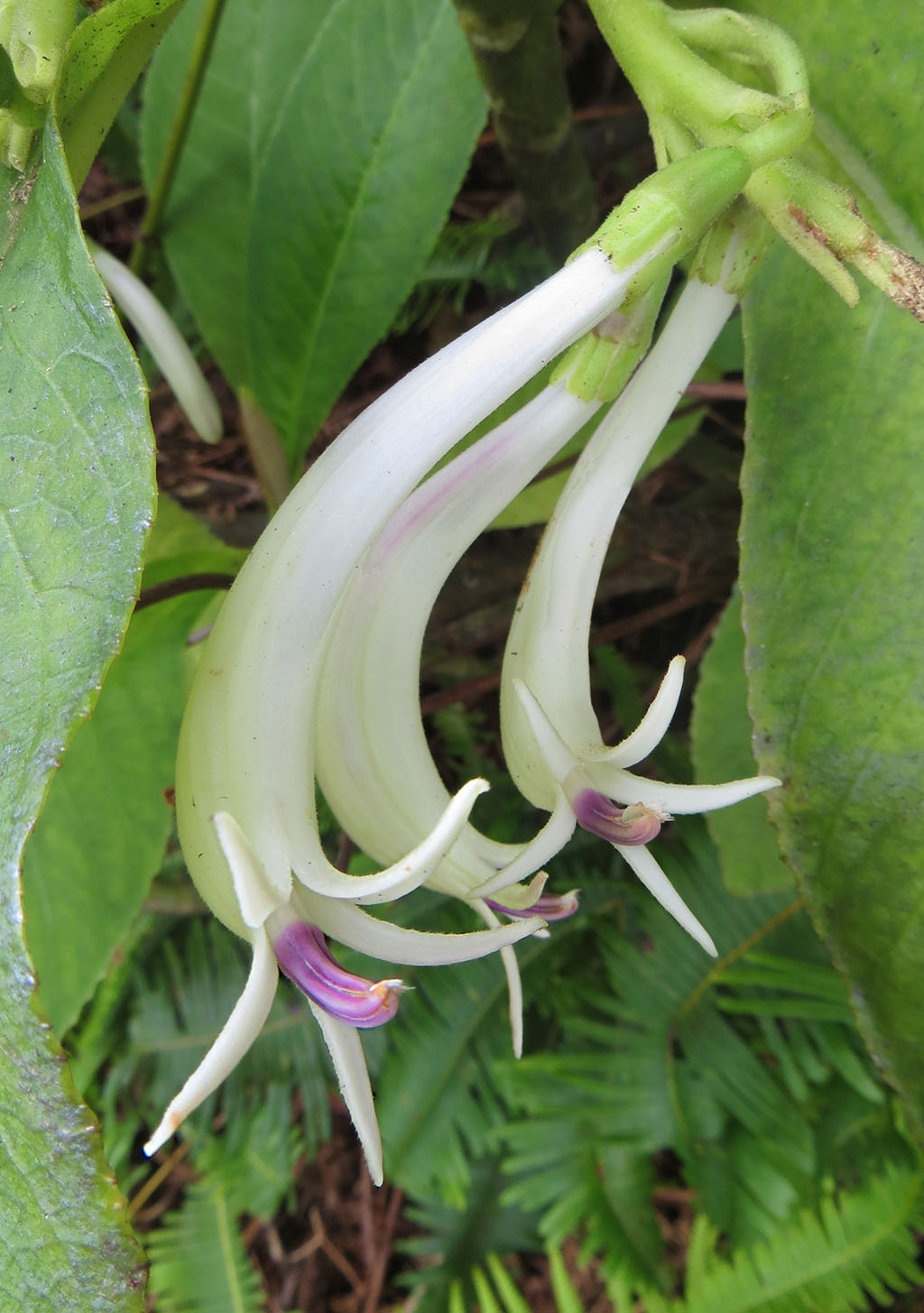 Cyanea humboldtiana is in the Hawaiian Lobeliad Group in the bellflower family, Campanulaceae.  The following 6 genera and 126 species are in the group. 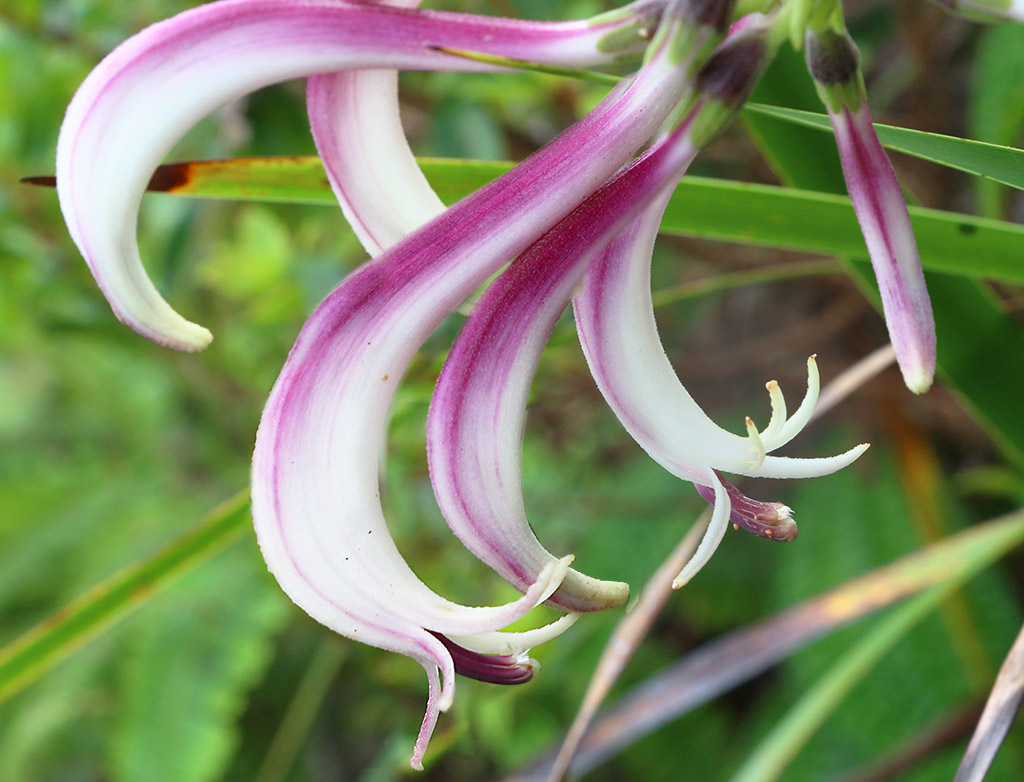 The Hawaiian lobeliad group is viewed by botanists as the pinnacle of adaptive radiation in plants.   Scientists believe that a lobelia-like species arrived about 13 million years ago — when Gardner Pinnacles and French Frigate Shoals, now small rocky islands in the Northwest Hawaiian islands, were high mountainous islands long before the current main islands existed.  Over eons of time, as the Northwest Hawaiian islands eroded away to atolls and each of the main Hawaiian island emerged from the depths of the ocean to become high mountains, the plants were brought over by birds and the plant evolved into many forms.  These forms are closely related to each other and are geographically localized. Cyanea is the largest and most diverse genus in the Hawaiian lobeliad group. 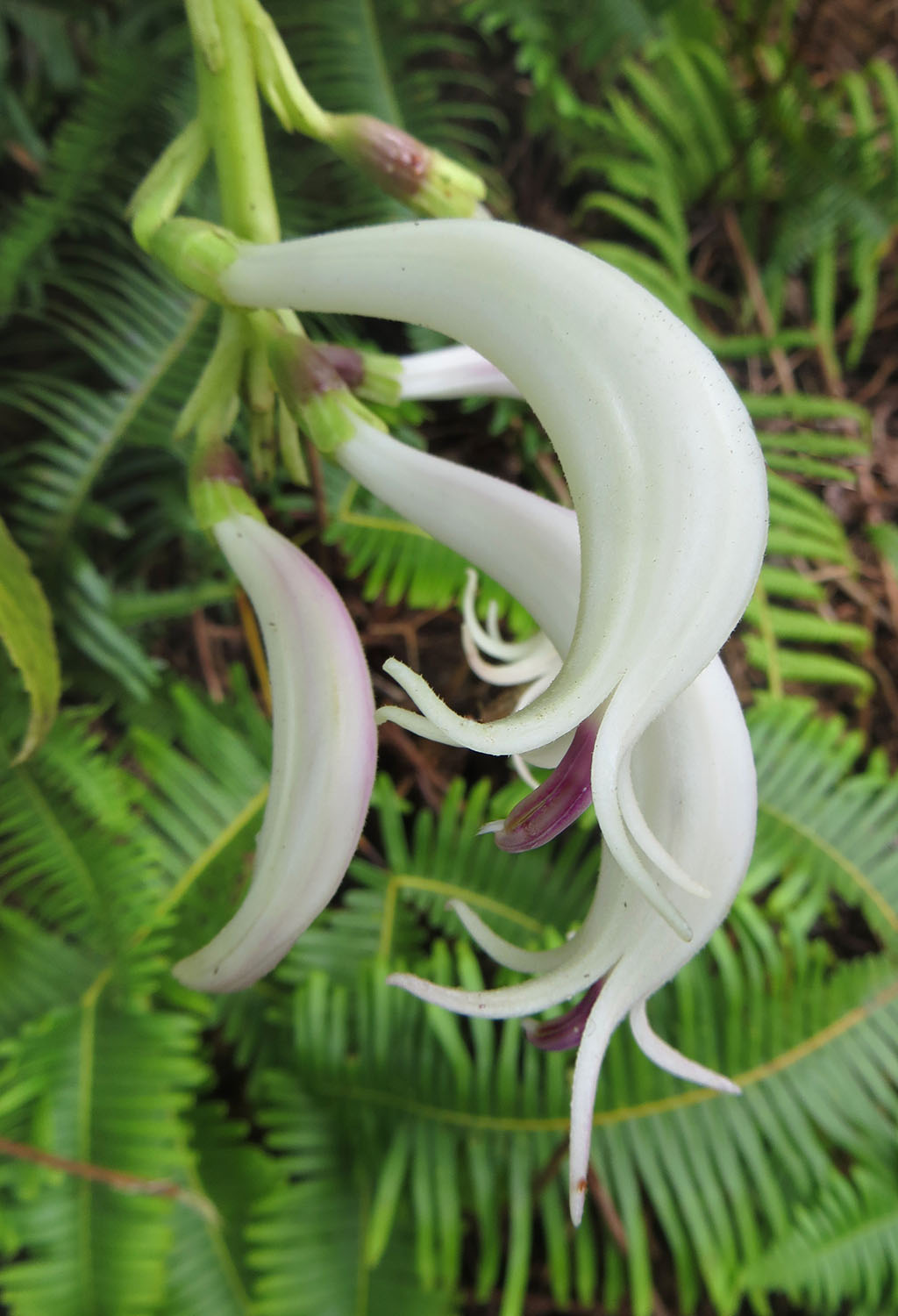 The tubular flowers have a distinctive bulge and curve. It would be fascinating to see the native bird or insect that co-evolved with the plant to pollinate these unusually shaped flowers.  Such beautiful and distinctive flowers!

5-Year Review of Cyanea humboldtiana, US Fish and Wildlife