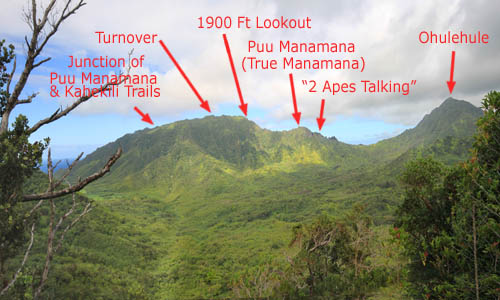 Let the annals of hiking in Hawaii show that on July 3, 2010, Pete Clines and Laredo Muredo became the first to summit True Manamana, the 1,650 foot high peak on Manamana Ridge in the Koolauloa District of windward O’ahu.

The 1,650 foot distinctively-shaped peak held much significance to the early Hawaiians.  “Pu’u” means “peak” and “Manamana” means “extreme supernatural or divine power”, so much so that even though the peak is not the highest point on the ridge, it gives its name to the entire ridge.  Manamana ridge descends from the Ko’olau Summit Ridge and passes through Ohulehule before separating the valleys of Ka’a’awa and Kahana.

The summit of True Manamana has been a quest for some of the best climbers on the island — Chuck Godek, Al Miller, and Charlotte Yamane — for decades but no one has been able to reach the summit until now.  The climb is extremely dangerous, traversing crumbly knife edged cliffs that plunge hundreds of feet on either side. Because of the hazards, HTMC discourages anyone from attempting this climb.  So only the strongest climbers fool-hardy enough to personally undertake the risk on their own time, have made the attempt. 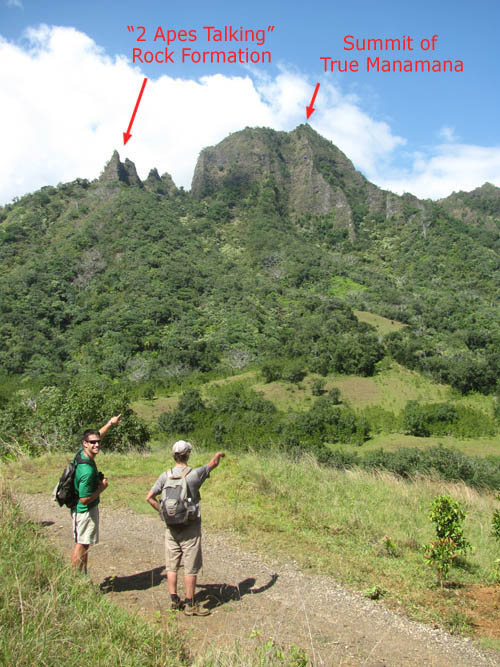 Earlier this year while hiking in Ka’a’awa Valley, Pete Clines told me about his first attempt to climb True Manamana.  Back in 2005, he and a friend started at 9:45 am and plowed through uluhe ferns for hours before getting to the 1,900 foot lookout point just after noon to start the real adventure.  But because one can only proceed slowly along the knife-edged cliffs, they ran out of daylight and and had to bail down a side-ridge into Ka’a’awa Valley.  In order to prepare for this attempt in 2010, Pete assembled a trail clearing crew the week before on June 27 — comprised of Chris Cheng, August Smith, and Tricia Higa.  The crew cleared a path through the uluhe ferns so what previously took 2 hours to plow through could now be reached in 30 minutes. 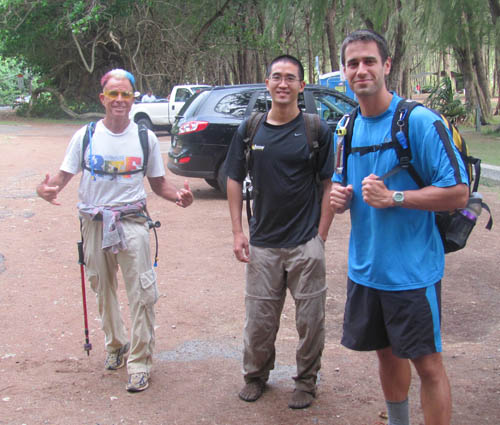 Since the team needed as much time as possible to complete the climb, Laredo Muredo (aka Rainbow man), Chris Cheng, Pete Clines (from left to right) and I met at Swanzy Beach Park at 6:30 am.  We then drove to Kahana Valley State Park where we pushed-off at 6:50 am to ascend the Puu Manamana Trail from the cemetery route on Trout Farm Road. 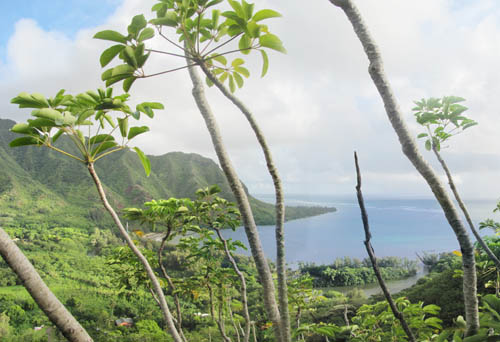 Clouds obscured much of the coast in the early morning, and we could see a succession of rain squalls blowing in from the ocean as we climbed up the trail where trumpet or he`e trees (Scheflera) dominate the ridge.  But despite the clouds, we were optimistic that the weather would clear and continued up the ridge. 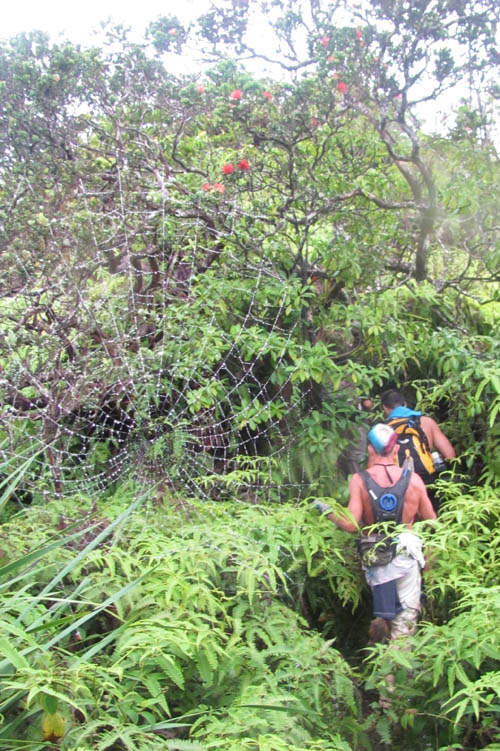 Mist from low hanging clouds condensed on the vegetation and spider webs as we climbed to the summit of Manamana Ridge — Turnover — at 2,027 feet elevation. 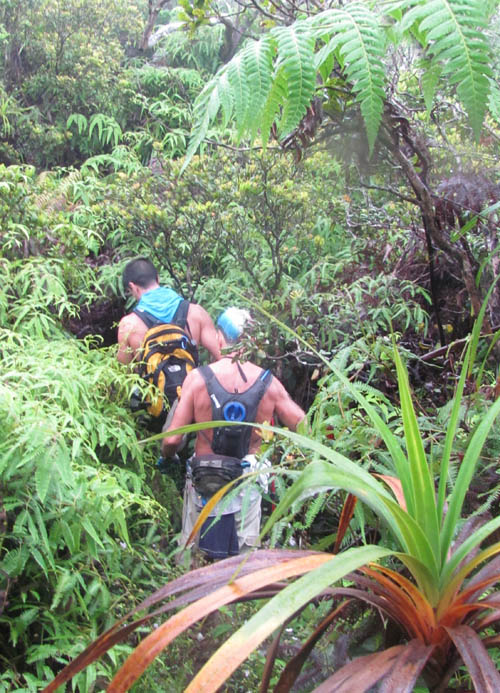 Reaching Turnover just before 9 am, we rested briefly before pushing-off on the freshly cut trail created the week before.  Thanks to the hard work of August and Tricia, we easily made our way to the 1,900 foot lookout point. 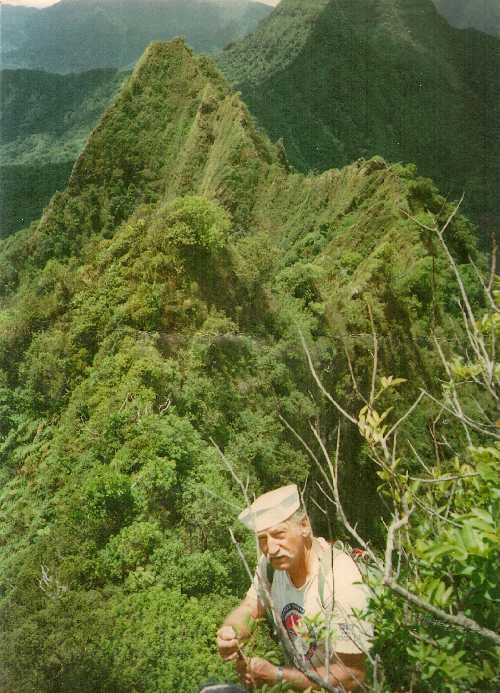 Chuck Godek on way to True Manamana in 1990, HTMC Archives

The 1,900 foot lookout point overlooks a big saddle that drops down nearly 600 feet before climbing back up to True Manamana at about 1,650 feet elevation.  As the crow flies, the distance between the lookout and True Manamana is only half-a-mile, but the crumbly knife-edge ridge is treacherous as it snakes back and forth with steep several hundred foot drop-offs that slows forward progress to a crawl.  The photo above was taken on a clear day back in 1990 when one of the club’s strongest climbers — Chuck Godek — attempted to reach True Manamana.  Except for the Kipapa-Manana secton of the Koolau summit ridge, Godek hiked the entire length of the Koolau Mountains — including the most treacherous parts — the Pali, Lanihuli, and Moanalua — which require ropes, pitons, and guts. 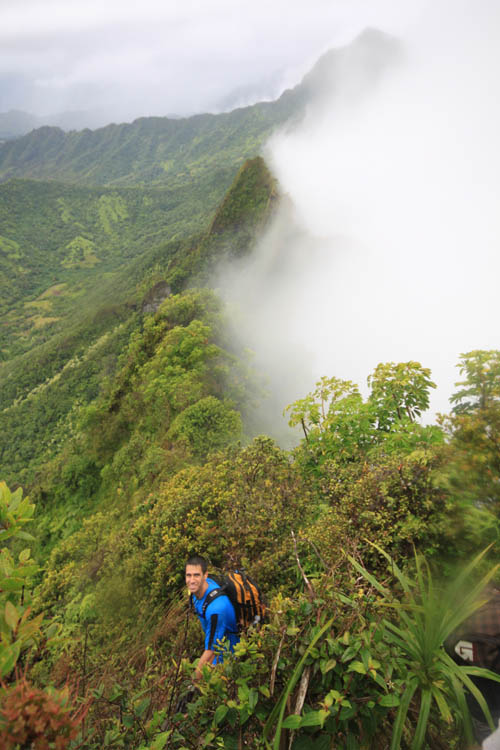 When we reached the 1,900 foot lookout point at 9:30 am, wind blew the clouds away on the windward side of the ridge but were protected on the leeward-side by the ridge.  The plan was for me to remain at the 1,900 foot lookout for the rest of the day — which ended up being for the next 7 hours — where I could watch and photograph the team as they made their way to True Manamana.  Beyond True Manamana, the ridge continues on to Puu Ohulehule — which is shrouded in clouds above — before the ridge connects to the Ko’olau Summit. 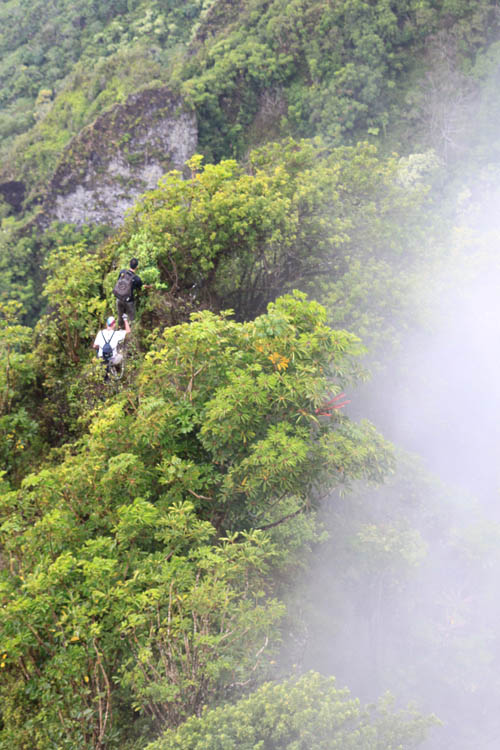 Not long after pushing-off, clouds blew in and swallowed-up the ridge right after I snapped this photo of Chris and Laredo.  It then dumped its moisture on us.  Unfortunately, our optimism that the weather would clear was wrong.  But fortunately, the rain lasted only briefly and the wind was light.  I put on a wind-breaker and configured my poncho into a bivy sack of sorts to protect my camera gear and conserve body heat.   While hunkered down in my poncho-bivy, Pete called on his cell phone to tell me Chris was turning back.  Chris is wary of heights and was intimidated by the steep drop-offs.  Al Miller once described certain sections of the crumbly knife-edged ridge as “suicidal”.  Chris wisely listened to his internal “danger meter” and returned to keep me company at the 1,900 foot lookout for the rest of the day. 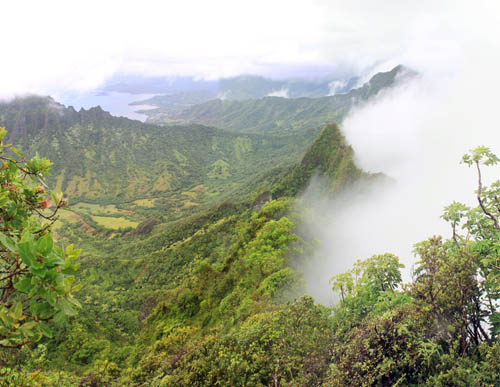 Clouds blocked our view for more than 80% of the time, but the wind would periodically blow the clouds away on the windward side of Manamana Ridge providing dramatic views of True Manamana in the clouds and the surrounding landscape. 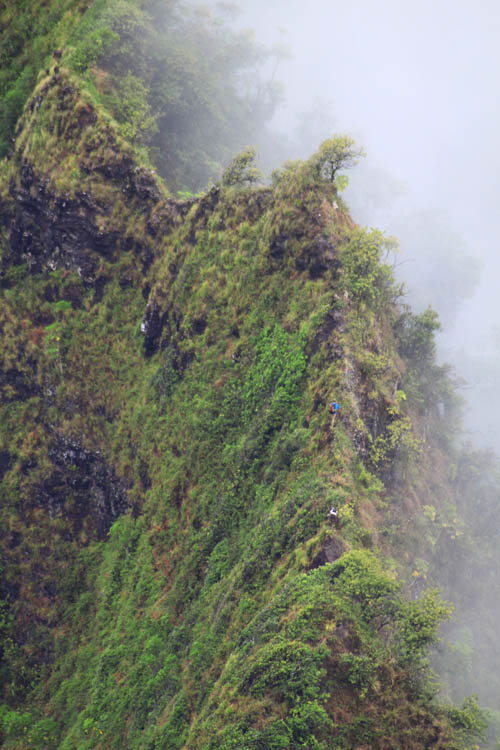 When the clouds lifted, Chris and I scanned the ridge line looking for Pete and Laredo.  I was able to zoom in along several sections of the knife-edged ridge to take this photo of Pete and Laredo.  Unfortunately, thick clouds returned, blocked all views, and rained again — a pattern that repeated throughout the day.  Since Chris recently returned from Senegal in West Africa from an 18 month stint with the Peace Corps there was no shortage of interesting things to talk about to pass the time. 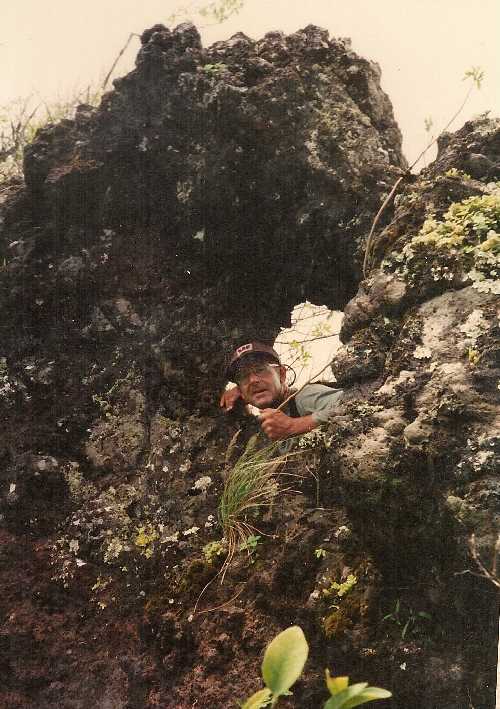 Back in 1993, Al Miller and Charlotte Yamane made 3 attempts to reach the top of True Manamana — once from the Manamana ridgeline and twice from Ka’a’awa Valley.  Miller was one of the best climbers on the island and was known as the daredevil in the club.  He climbed to the crest of Mo’o Kapu O Haloa, crossed over from Kamaileunu to Mount Ka’ala, and climbed up to the Ko’olau Summit Ridge from nearly every windward ridge — many of which most would consider suicidal.  In the photo above, Miller can be seen through a puka (hole) in the ridge during his attempt to climb to True Manamana. 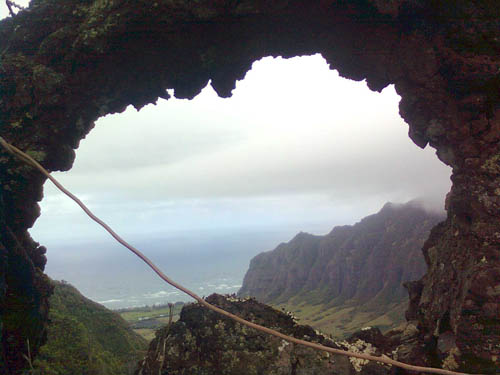 While low-hanging clouds blocked my view, Pete and Laredo made their way past the same puka in the ridge where Miller was photographed in 1993. The cable held in Miller’s hand in the photo is still in place. 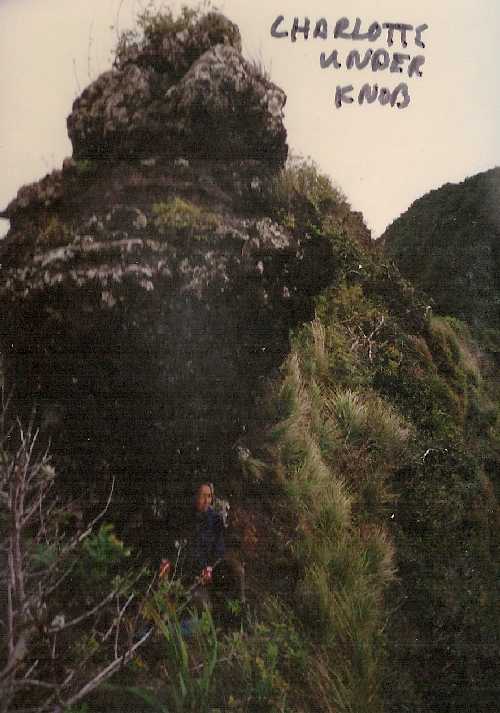 Charlotte Yamane, who stands under 5 ft tall and weighs under 100 pounds was Dayle Turner’s hiking idol.  Dayle once described Charlotte as “pound for pound the the strongest climber on the island”.  Charlotte was Miller’s climbing partner and accompanied him on many of his most difficult climbs.  In the photo above Charlotte rests under a prominent knob on Manamana ridge. 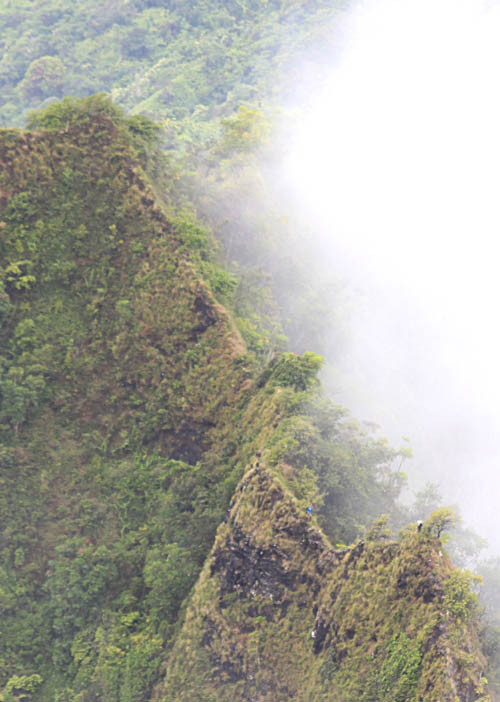 While napping in my poncho-bivy, Chris woke me up when the clouds parted and we could see Pete and Laredo within striking distance of the summit!  But not long after I took the photo above the clouds returned.  Within another 20 minutes, we hear a whoop way off in the distance — Pete must have reached the top!  Pete called us and confirmed he indeed made it to the summit!  Not long after we heard a second whoop — Laredo made it to the summit too!  Since I wanted to photograph them at the summit, we decided they should wait until the clouds cleared.  So they hunkered down at the summit, had lunch, and waited for the clouds to clear. 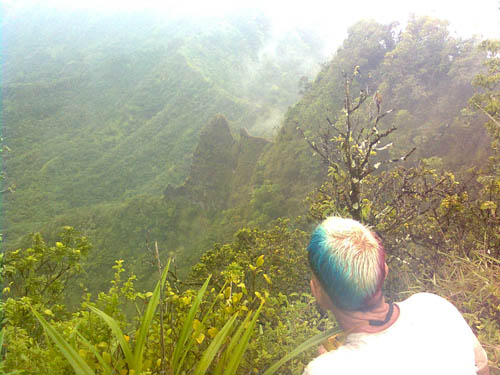 Unfortunately, the clouds never cleared to give me a clear shot of Pete and Laredo after more than an hour of waiting.   But photographic evidence of their achievement can be seen in this photo taken by Pete of Laredo from the summit of True Manamana where the “2 apes talking” rock formation can be seen further back along the ridge. 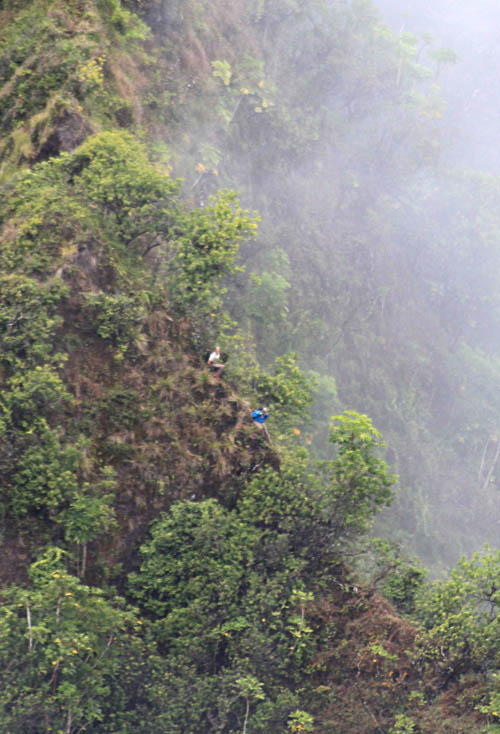 Just as postulated by Murphy’s Law, the clouds lifted soon after Pete and Laredo departed from the summit.  So while I wasn’t able to photograph them on the top of True Manamana I was able to get this shot of them descending the summit.  Soon after the clouds blew in again and completely shrouded the view. 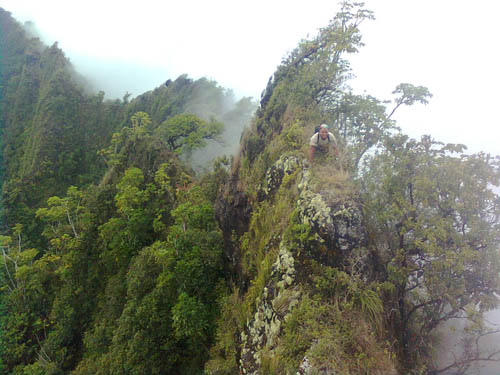 With low hanging clouds blocking my view of the climbers, Pete took this photo of Laredo crawling on all fours on a knife-edged ridge as he made his way back. 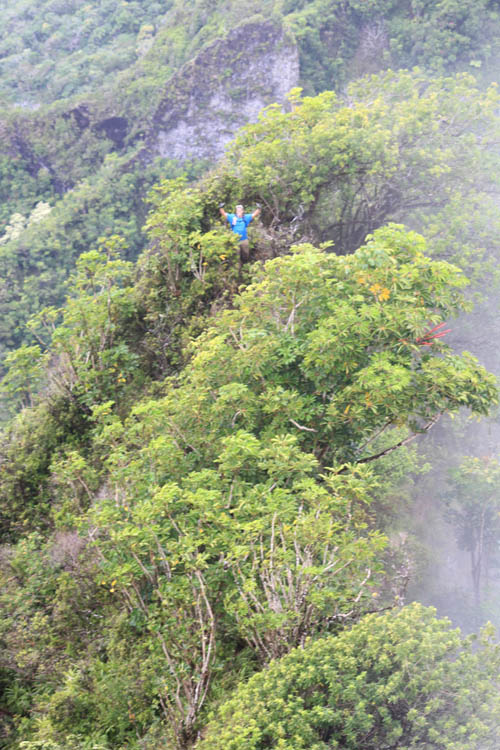 Just as Pete returned to the 1900 foot lookout, the clouds lifted once again.  It was great to see Pete and to hear his whoops as he climbed back up to where we were perched for the last 7 hours. 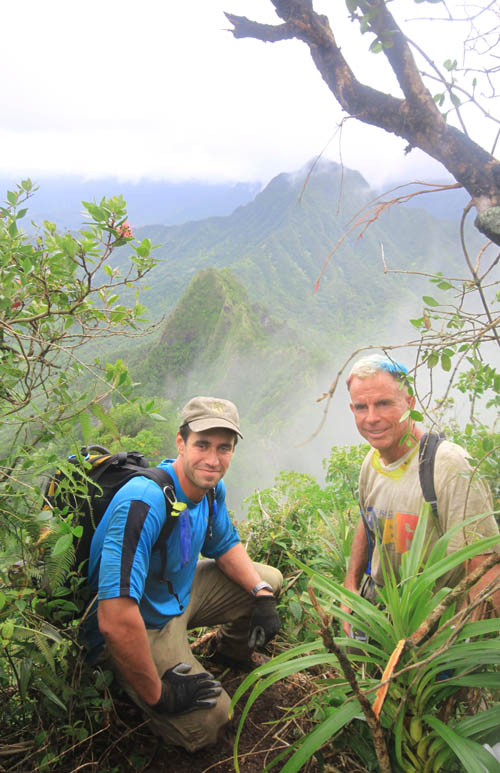 When Laredo reached us as well, the clouds almost entirely lifted off the ridge — the clearest it had been all day — and I was able to take this shot of the first men to conquer True Manamana!   We asked them many questions and listened to how they inched their way — sometimes crawling across the crumbly rock on all fours — to descend and climb steep cliffs with the aid of ropes.  Especially harrowing to hear was when Pete traversed a narrow ledge where he slipped and fell off the side of the cliff.  Fortunately, vines and other vegetation caught and slowed his fall, and Laredo helped him climb back up to the ridgeline. 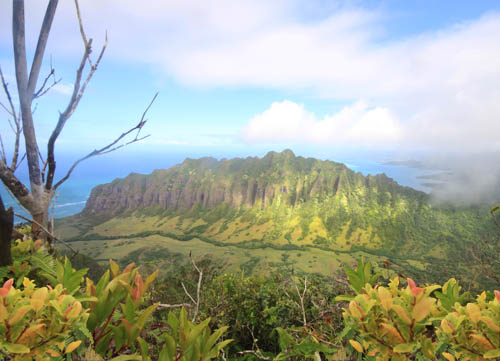 Just as we were pushing-off from the 1900 foot lookout at 4:30 pm, the clouds lifted allowing golden rays of sunlight to strike Moo Kapu O Haloa and Kanehoalani giving us a stunning view of Ka’a’awa Valley.  As we made our way to Turnover and then back down the Pu’u Manamana Trail we learned that the route to True Manamana has no major big obstacles, but instead has many short abrupt climbs and drops over steep crumbly rock along the entire half-mile distance — much of it over knife-edged cliffs — making the way extremely difficult to negotiate for all but the most capable and fearless climbers.  Congratulations to Pete Clines and Laredo Muredo for being the first to summit True Manamana!

WARNING:  The climb to True Manamana is extremely dangerous and should only be attempted by trained experienced climbers with the proper climbing equipment.  The route traverses steep crumbly knife-edged cliffs that are unforgiving and any slip is likely to result in serious injury if not death.  It would be a good idea to have an advance medical directive and last will and testament in place before attempting this climb.