Clearing the Trail to Pu‘u Kaaumakua 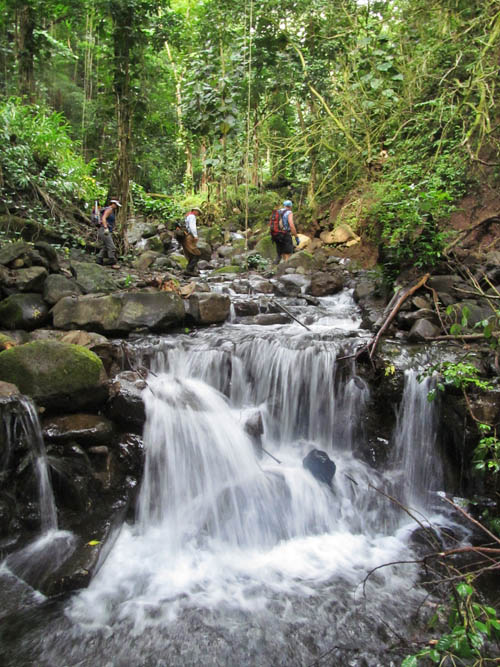 I joined the trail maintenance crew of the Hawaiian Trail and Mountain Club (HTMC) to clear the trail that leads to Pu‘u Kaaumakua on the Ko‘olauloa Coast of windward O‘ahu.

After meeting at Kualoa Beach Park, we consolidated into six 4WD vehicles and drove up Waikane Valley Road past two locked gates to where a tunnel bored into the aquifer supplies Waikane Stream with water.

The forest was lush and green as we crossed Waikane Stream and made our way up the Waiāhole Ditch Trail which services the tunnels and ditches that captures and transports water from the wet windward-side of O‘ahu to the arid leeward side of the island. 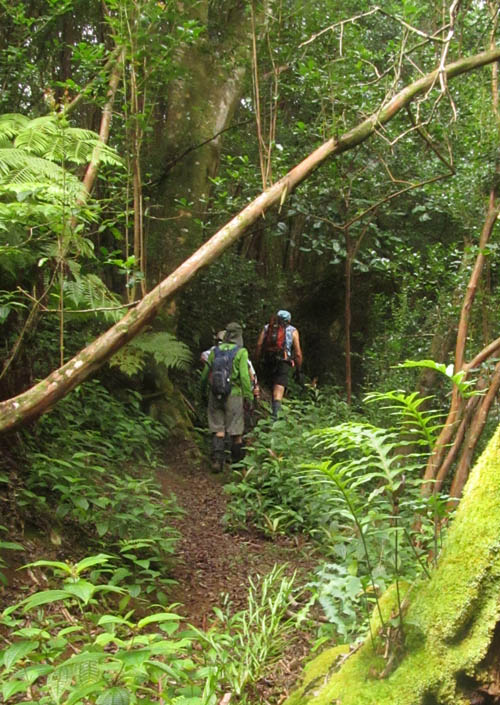 While making my way towards Kahana Valley with the team that would clear the upper portions of the trail we passed a number of large albezia trees with strawberry guava and clidemia beneath — all highly invasive plants. 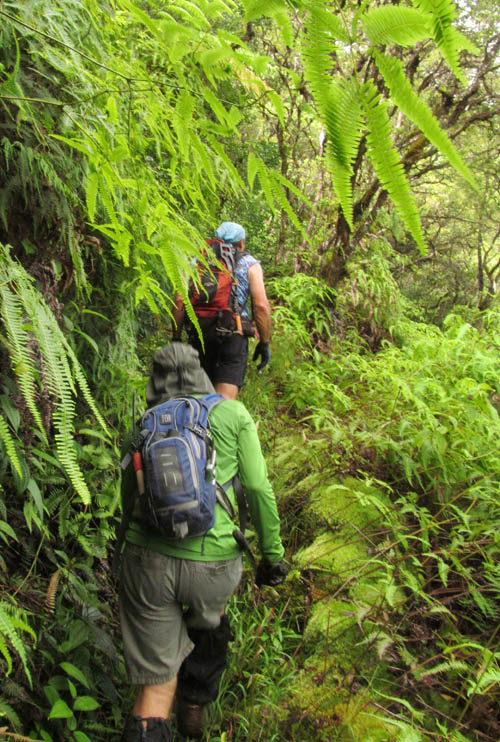 When we made the sharp hair-pin turn into Kahana Valley, we started hiking on the Waikane Trail built by the US Army that connects with the Schofield-Waikane Trail.  As we made our way up the gradual incline, uluhe ferns (Dicranopteris linearis) infringed the trail and dangled overhead. 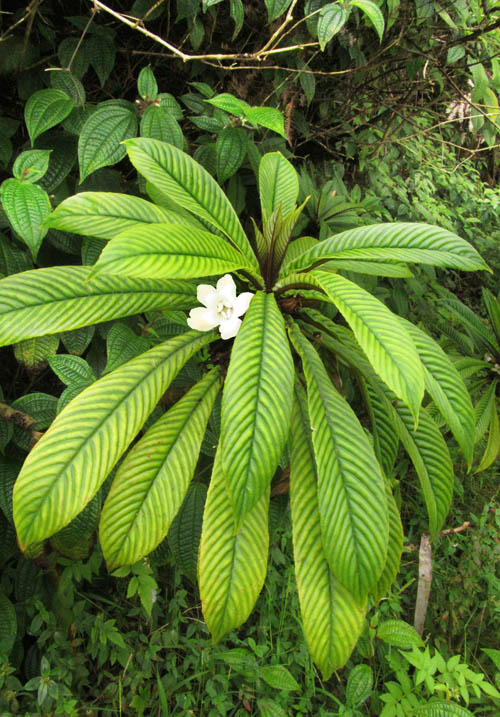 One of the rarer sights along the trail was an endemic ha‘iwale (Cyrtandra sp) which had a number of small white flowers. 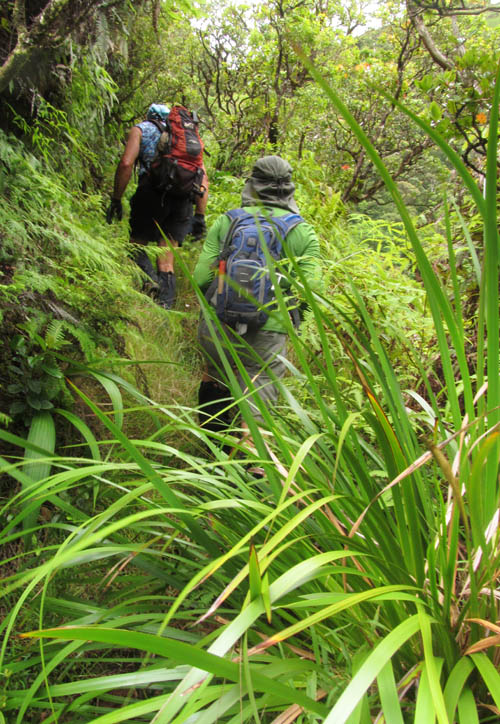 The trail climbed more steeply as we contoured in and out of a number of ridges where the vegetation became more native.  We passed beneath stands of ʻōhiʻa trees with uluhe and uki grass in the understory. 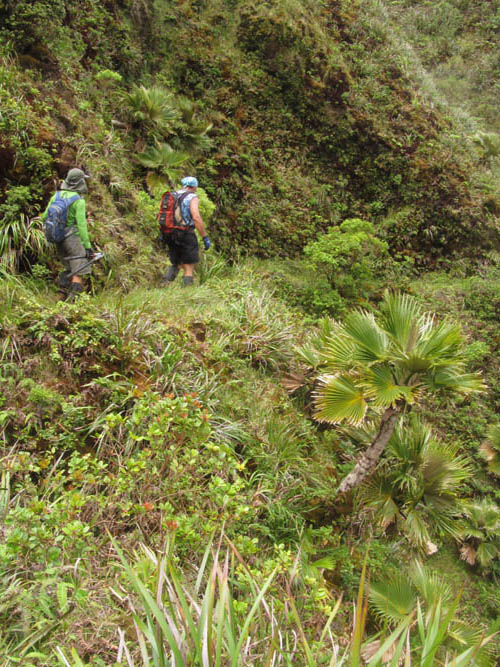 After gaining addition elevation we rounded a ridge and found ourselves contouring over a small bowl-like valley in the back of magnificent Kahana Valley.

The skies were overcast and clouds blew-in shrouding the mountain tops several times, but there were openings in the clouds which allowed the sunlight to penetrate and illuminate the view over Kahana Valley. 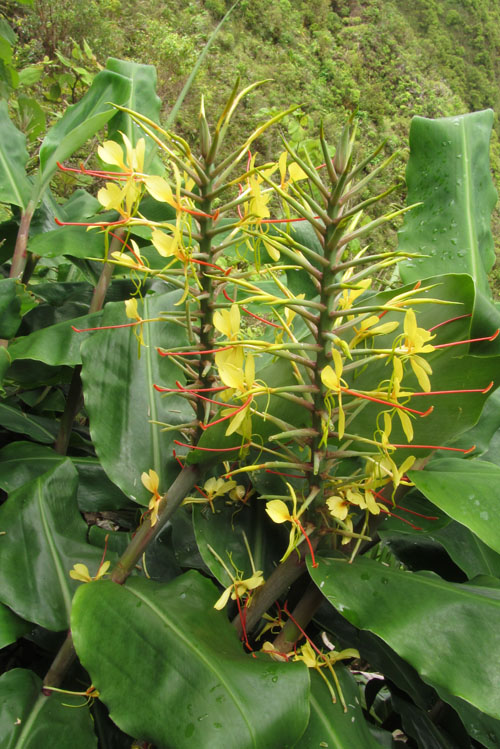 One of the more disturbing sights were patches of kahili ginger which are spreading up the mountain-side.  I dropped back from the lead group to hack away at these highly invasive plants and cut them to the root but they will undoubtedly grow back.  It would be ideal if someone with a permit to use herbicides could put an end to this scourge before they take over. 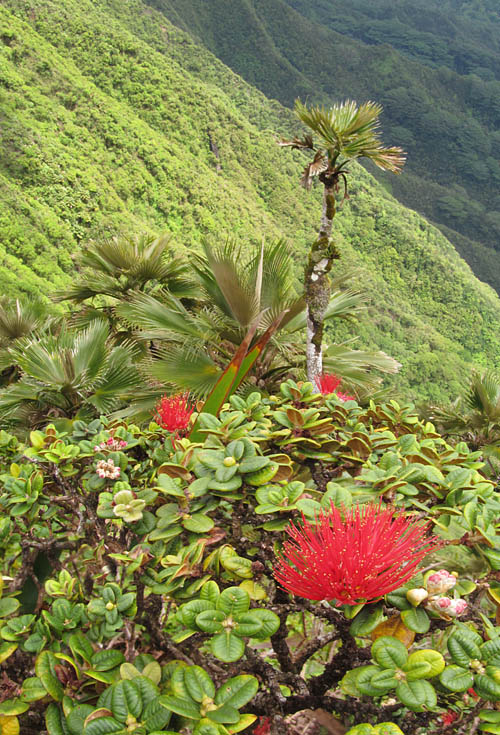 When I saw lehua papa (Metrosideros rugosa) with red lehua blossoms beneath loulu hiwa palms (Pritchardia martii), I could not resist to linger, admire, and photograph the magnificent sight.  These native plants are endemic only to the Koʻolau Mountains of Oʻahu and are adapted to the strong winds at the summit. 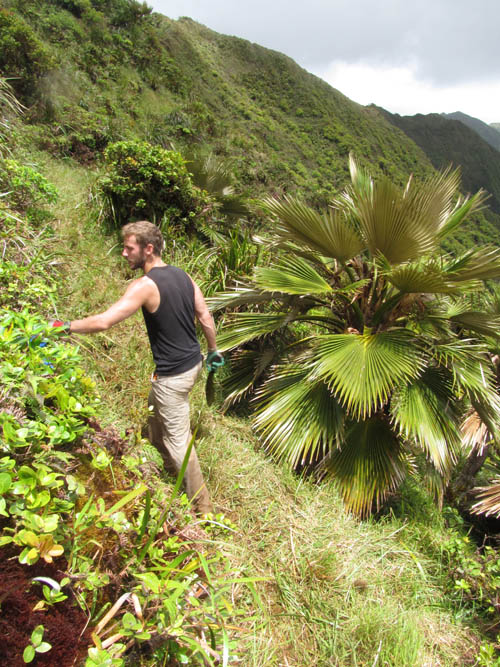 When I pushed-off once again, I ran into Chase Norton who climbed up Pauao Ridge the day before and camped the night before at the summit of the Schofield-Waikane Trail.  Chase was busy intent on clearing the section of Waikane Trail that intersects with the Koʻolau Summit Trail (KST). 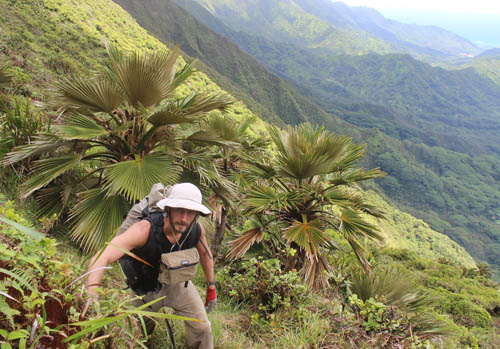 Seizing the opportunity, I coerced Chase to put on his backpack so I could photograph him in his element.  From March 24 to April 1 of 2012, Chase became the first to complete the entire 37-mile length of the Koʻolau Mountains from Pupukea to Makapuʻu completely self-contained over 9 consecutive days.  This included a traverse of the treacherous, knife-edged, precipitous saddles at Moanalua, Kalihi, and Nuuanu — a feat of physical and mental strength and endurance. 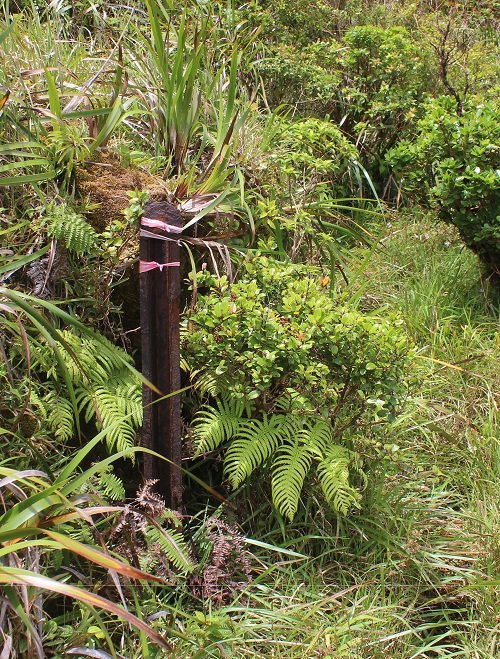 Not far beyond where Chase was clearing was the junction where the Waikane Trail meets the KST marked by a rusty metal stake.  I made the sharp left turn onto the KST and contoured in the opposite direction to make my way towards the summit of Kaaumakua. 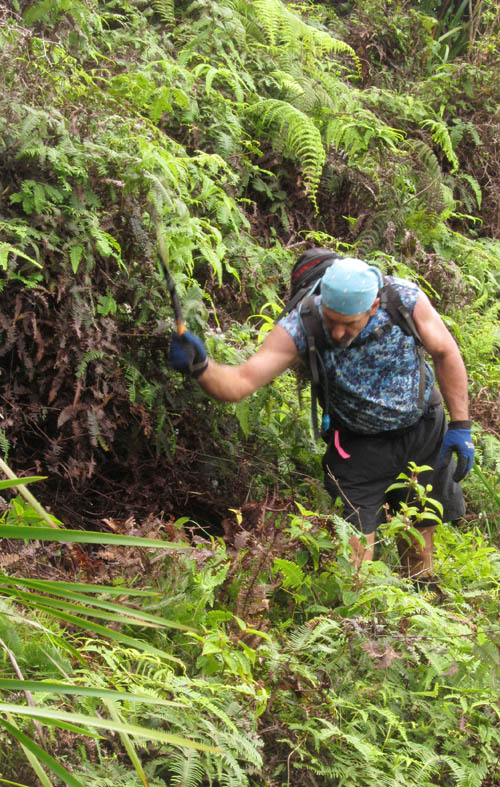 When I crossed over to the leeward side of the KST, I caught back up with the lead team.  Ralph Valentino and Steve Davis were busy hacking away at uluhe that blocked the trail.  For the next hour we cut back the fast growing ferns and cleared the KST to the shallow gully that leads to Pu‘u Kaaumakua.

After climbing the shallow gully to the summit, we were treated to panoramic views of Kāneʻohe Bay and the greenswept valleys of Waiāhole, Waikane, Hakipu‘u, Kualoa, Ka‘a‘awa and Kahana.  Our views were obstructed by low-lying clouds that tickled the summits of Kānehoalani, Ohulehule, Manamana, and Pu‘u Pi‘ei.  A near constant wind made the summit cold so we hunkered down behind an ʻōhiʻa shrub to eat our lunches. 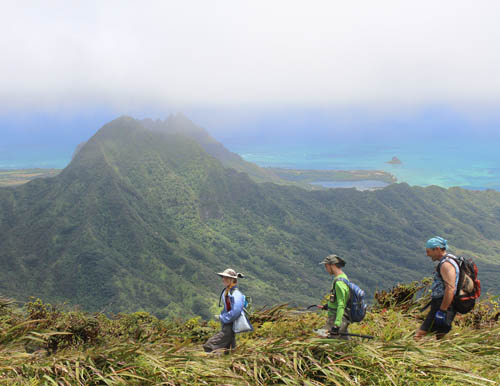 The wind whipped over the cold summit so we did not stay long at Puʻu Kaaumakua and descended the gully back down to the KST. 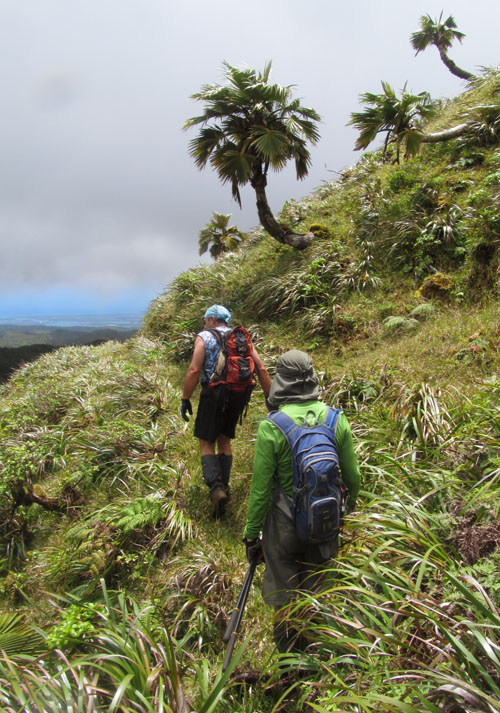 We contoured on the KST past a number of loulu palms to return the way we had come. 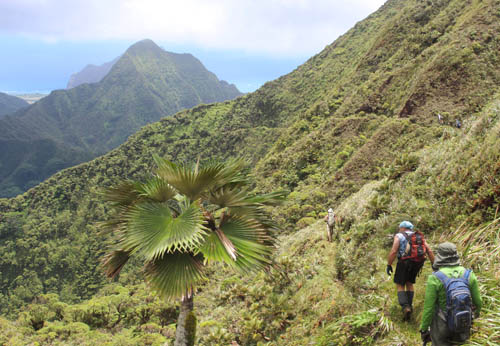 When we retraced our steps to the windward side of the Waikane Trail, we rejoined the rest of the crew and admired their labor to keep the contour trail open. 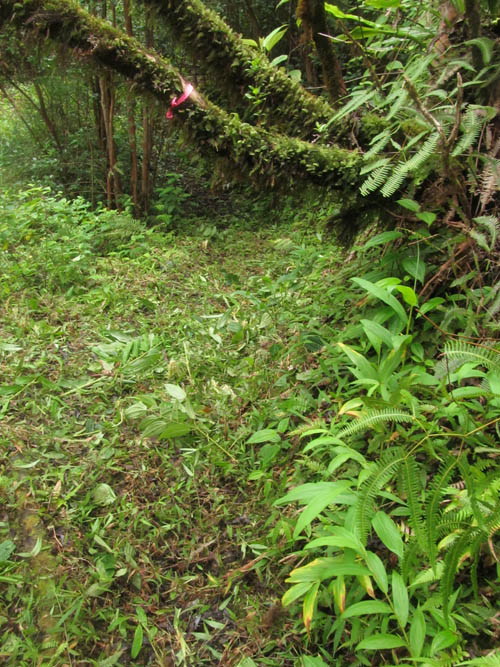 During the return leg of our hike, we came across the awesome work of Ken Suzuki who weed whacked the lower sections of the Waikane Trail wide open. 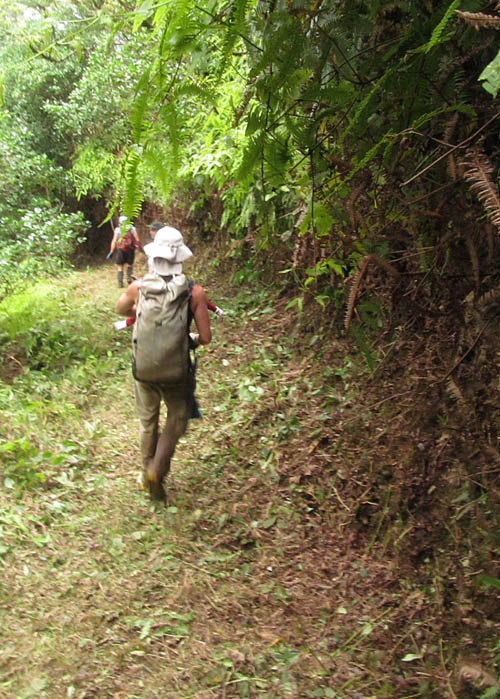 With the trail cleared to the wall, several lower portions of the trail have been restored to their original state — although many other sections require more work. While returning to our vehicles and crossing Waikane Stream, I could not help but reflect on the great time we had seeing panoramic views of windward O‘ahu, admiring native plants found no where else in the world, and clearing the trail to one of the most spectacular places in the Ko‘olau Mountains.  What a great hike!