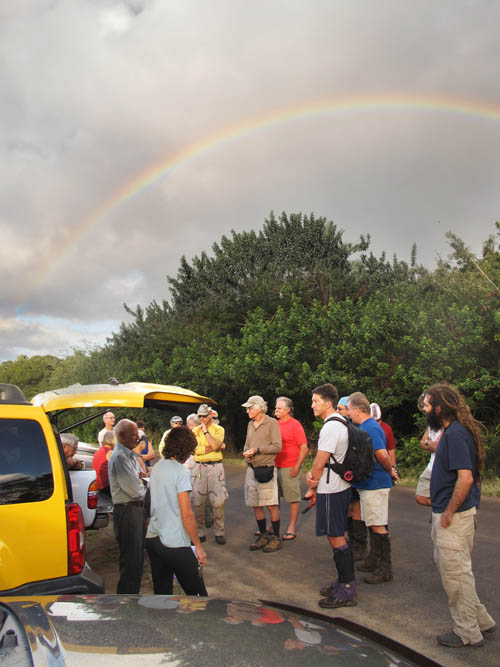 I joined the Hawaiian Trail and Mountain Club (HTMC) to clear the trail that leads to the freshwater pools at Kawaiʻiki on the north shore of Oʻahu.

Kawaiʻiki is one of several valley trails on the leeward side of the Koʻolau Mountains above Haleʻiwa constructed to service a ditch that transports irrigation water from the mountains to the lowlands.

The skies were overcast and a rainbow appeared overhead as the HTMC trail maintenance crew rendezvoused at Haleiwa Beach Park.  The group consolidated into a smaller number of vehicles and then drove up the dirt roads above Haleʻiwa. 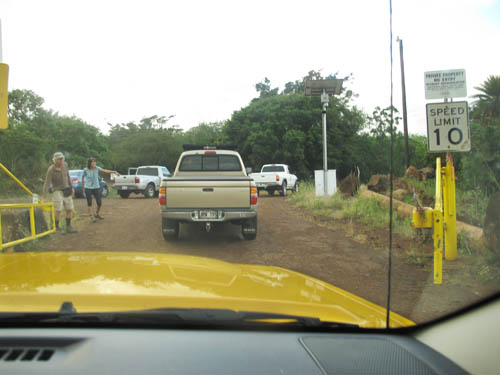 The land is own by Kamehameha Schools and permission is granted to HTMC to hike Kawaiʻiki with the understanding that the club maintain the trail in good hiking condition by cutting back fast-growing vegetation and fallen trees.  The easiest way for hikers to do Kawaiʻiki is to go with HTMC or the Sierra Club who hike the trail once a year. 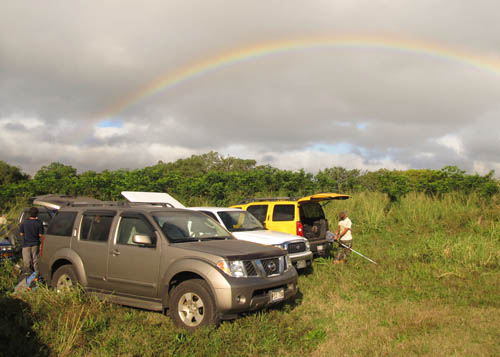 After driving for nearly 6 miles on the paved road constructed by the U.S. Army for the Stryker Brigade we parked near the old Palama Uka camp site.  We were blessed to see another rainbow overhead as we pushed-off from our vehicles to begin our hike on the dirt road. 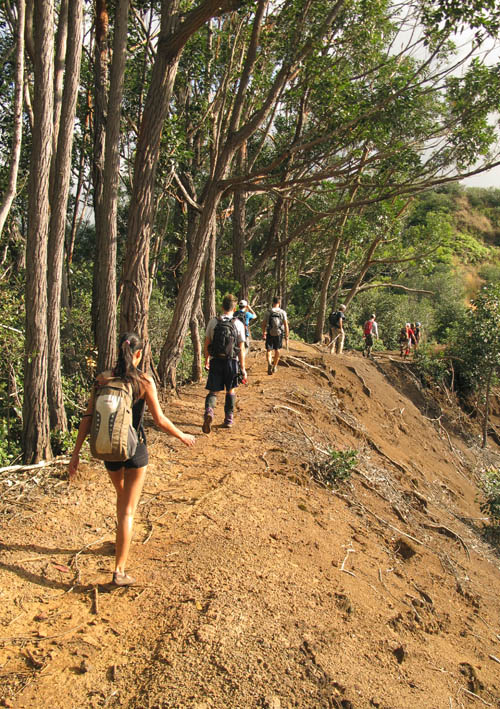 The dirt road led to the start of the contour trail where many eucalyptus trees were planted as part of reforestation efforts in the early 1900’s.  The hike is about a 5 mile roundtrip and leads to a dam beyond which a series of freshwater pools flow from one to another. 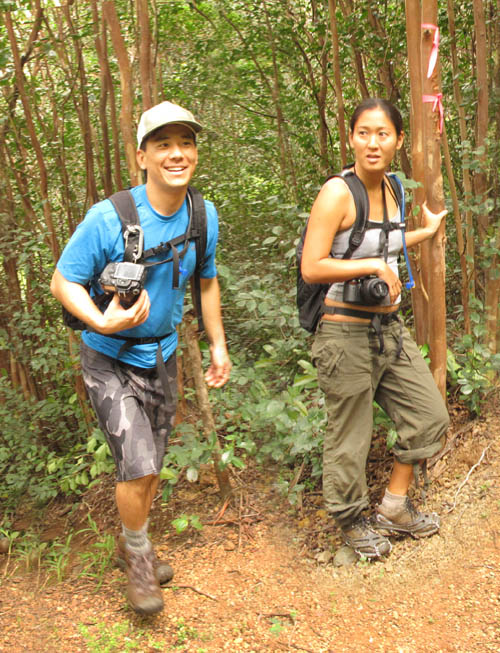 We were joined by David Chatsuthiphan whose photos and webiste at Unreal Hawaii I have admired for quite some time.  We were also joined by Lei Yamasaki whose photo compositions are also awesome. 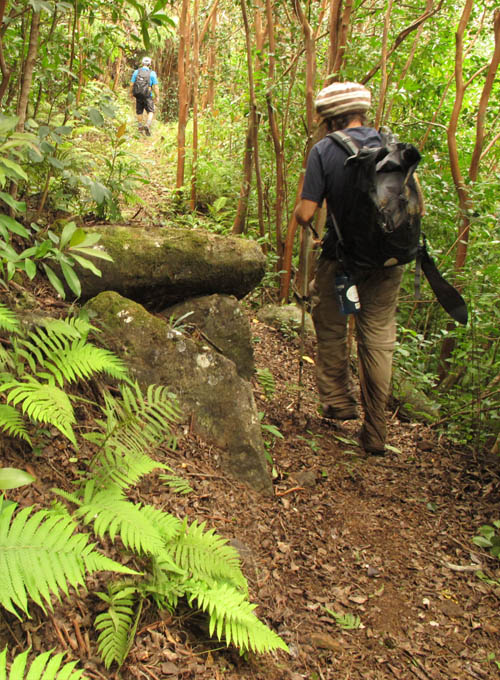 Invasive stawberry guava, fiddlewood, and clidemia are pervasive and we hacked at them with our machetes as we made our way into the valley. 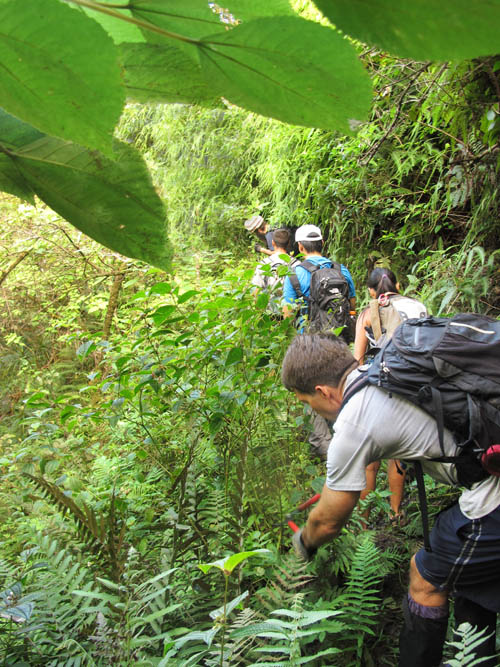 But we also saw many endemic māmaki tree (Pipturus albidus) whose large leaves hung from above as we reached down to cut back invasive plants along the trail. 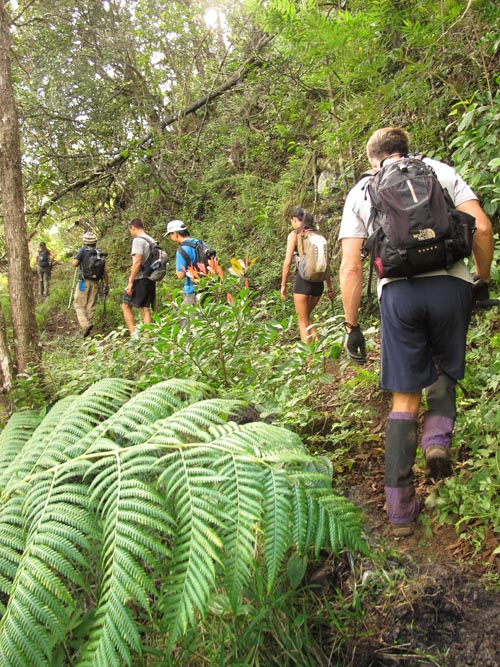 We also saw a number of hapuʻu tree ferns (Cibotium chamissoi) whose large fronds dangled over the trail. 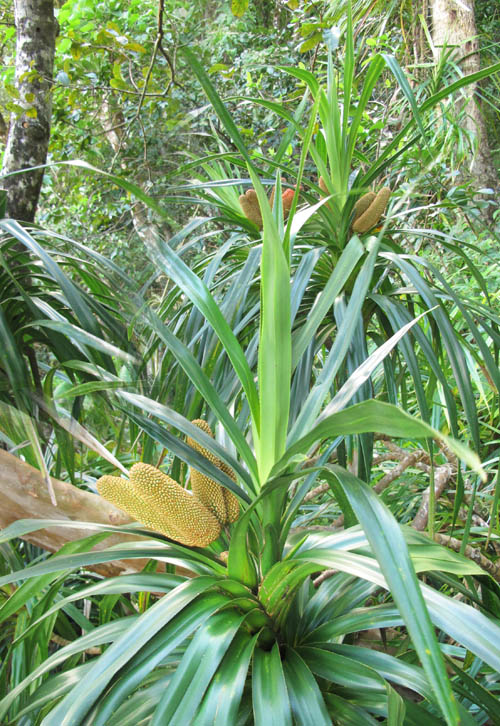 One of the more interesting sights were ʻieʻie vines (Freycinetia arborea) with fruits. 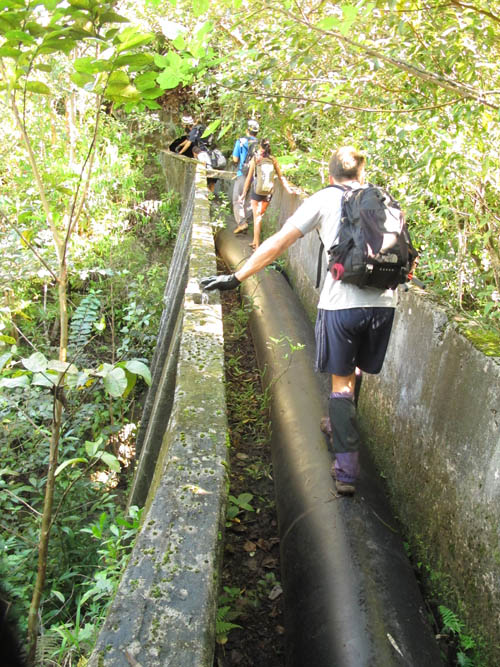 When we came to a cement ditch we hiked on top a large pipe for a short distance before reaching a cement bridge that tranported water over the stream. 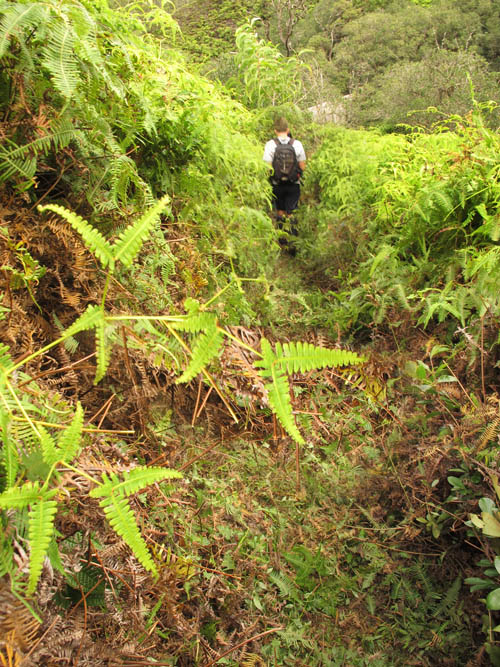 From the cement bridge, some of the group venured into a tunnel that emerged on the far side of the ridge.  But I chose not to crouch down in the tunnel and opted to hike up and over the ridge through ʻuluhe to the other side. 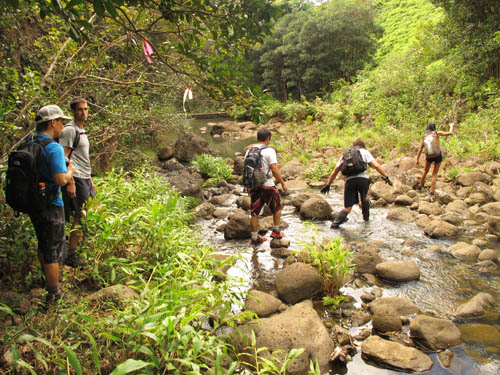 When we reached the dam on the far side of the ridge — which diverts stream water into the ditch — we reached the furthest extent of the contour trail and the hike transformed into a stream hike. 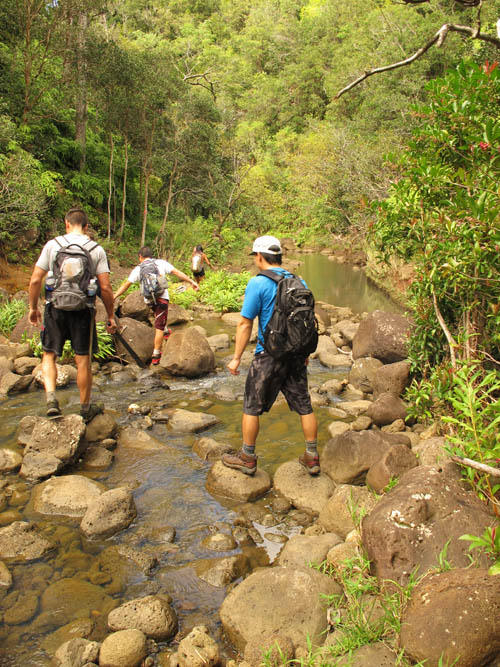 We crossed the stream multiple times passing several pools, all the while cutting back ginger, uluhe, and other fast growing vegetation that blocked the way. 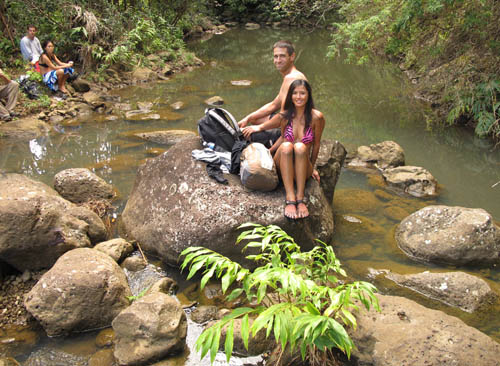 When we reached the first big pool, where the club normally stops for lunch, we continued further upstream to the next pool which is even nicer. 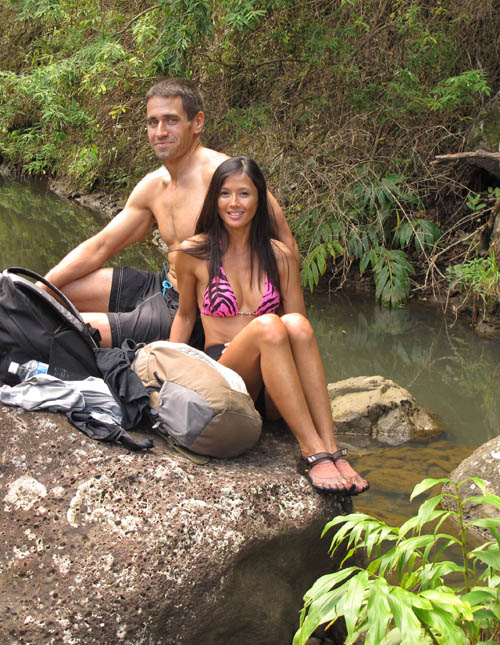 Pete Clines and Chenay Borja were all smiles as they enjoyed the pool from a rock in the stream. 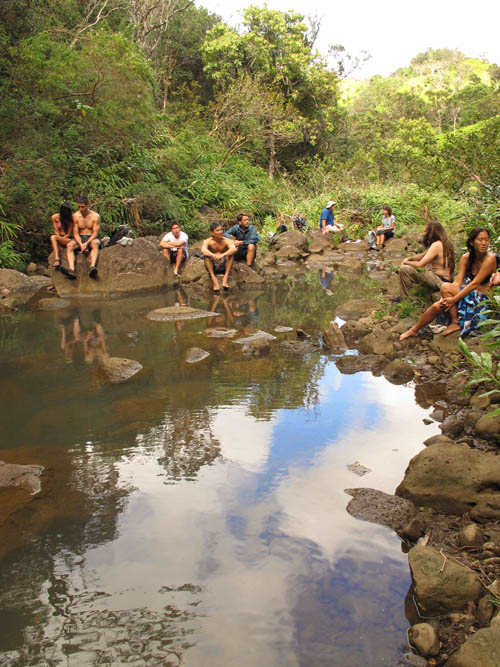 The water was inviting and several of us went for a dip in the pool.  The rest ate their lunches, enjoyed each others company, and relaxed along the edge of the pool. 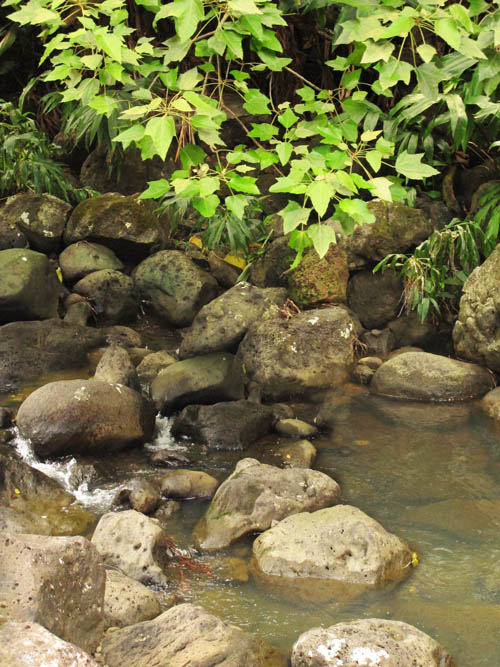 Curiousity got the best of me and I ventured a little further upstream where I saw a number of kukui trees (Aleurites molucans) whose leaves and branches dangled over the water. 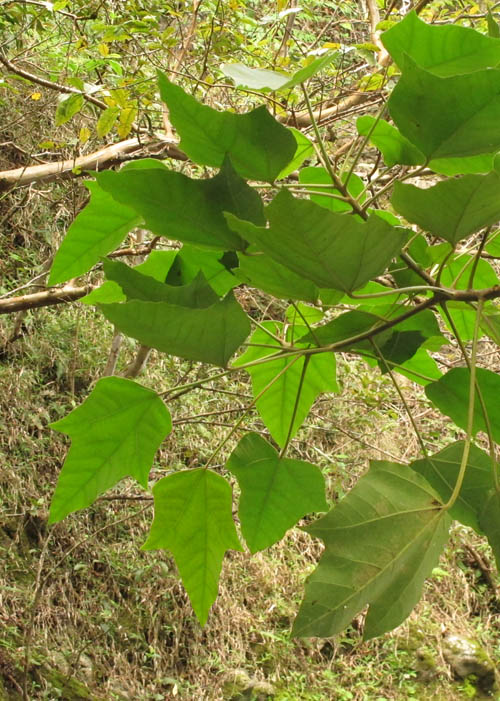 Backlit kukui leaves always catch my eye and I could not resist photographing them. 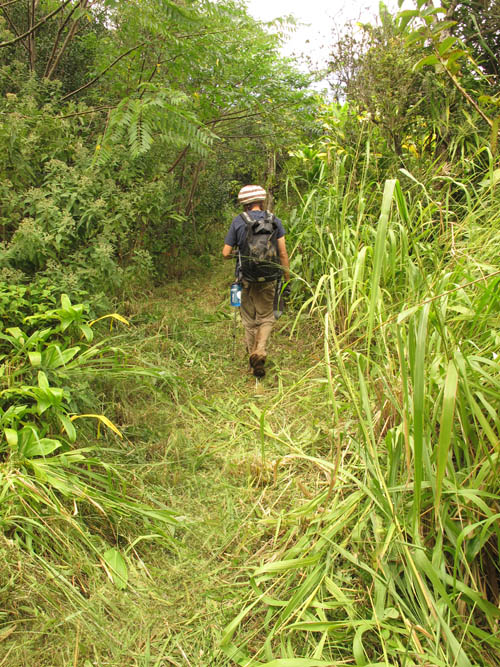 Time past quickly and soon it was time to leave.  So we picked ourselves up and hiked back out.  As we retraced our steps the way we came in, we admired the work of the mechanized crew who carried in heavy hedge trimmers and weed whackers.  Many thanks to Ralph Valentino, Grant Oka, Ken Suzuki, and Thomas Yoza, the trail is now wide open!

While making our way back our cars I reflected on the great time I had clearing the trail and enjoying the fresh water pools at Kawaiʻiki.  What a great place to cool-off!