Clearing the Kamananui and Kulanaahane Trails 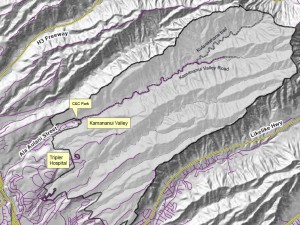 I joined the trail clearing crew of the Hawaiian Trail and Mountain Club (HTMC) to clear the Kamananui and Kulanaahane Trails in Moanalua Valley that lead to the Koʻolau Summit Ridge.

There is some confusion in the name of these trails.  The State of Hawaii’s Na Ala Hele Program calls the 3.5 mile dirt road leading to the end of the Moanalua Valley the “Kamananui Valley Road”, and the 2 mile trail that veers off the dirt road, crosses the stream multiple times, and climbs to the Koʻolau Summit Ridge the “Kulanaahane Trail”.

HTMC on the other hand — which has been doing both hikes for decades prior to their adoption by Na Ala Hele — calls the combination of these hikes “Kamananui”.  Since the same name refers to different hikes clarification is always needed.  I think HTMC should adopt the State’s naming convention to end the confusion.  At any rate, I joined HTMC to clear the way to the Koʻolau Summit Ridge on the Moanalua Saddle that overlooks Haiku Valley on the windward side of the island. 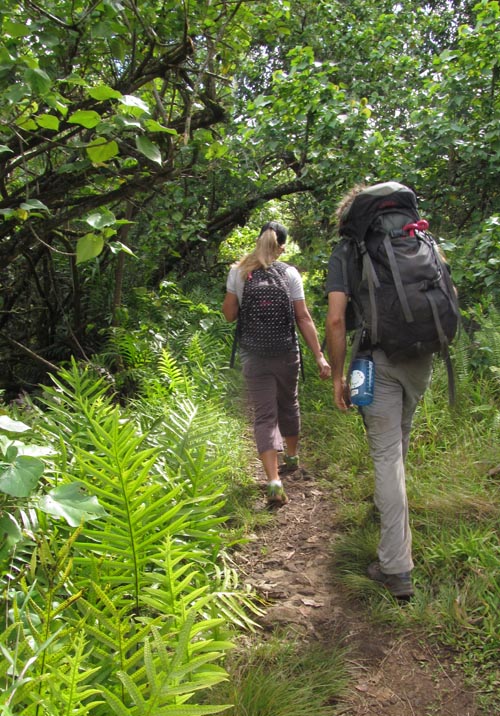 August, Danielle, and I pushed-off from Moanalua Valley Neighborhood Park at the end of Ala Aolani Street to make our way up the valley.  August and Danielle were planning to hike up the Middle Ridge rather than to do Kulanaahane trail clearing so I would only do the road portion of the hike with them. 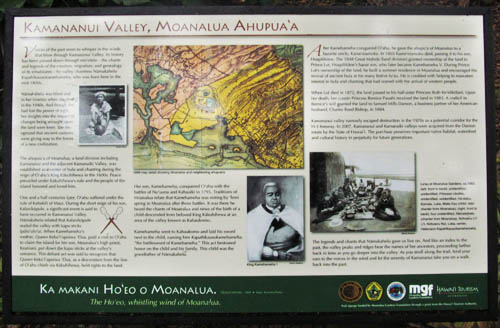 One of the first things we noticed were a whole new set of signs along the side of the road that were fascinating to read.  The signs were informative and nicely written — they told us that Kamananui is the name the Hawaiians gave to this valley in the ahupuaʻa of Moanalua.  Other well written signs were devoted to plants, birds, petroglyphs, legends, and other aspects of the valley.

We were pleased to see water in the stream due to the heavy rain received in March.  It has been an unusually dry winter and the stream was reduced to series of stagnant pools.  As we crossed the 7 bridges we were thrilled to hike over water. 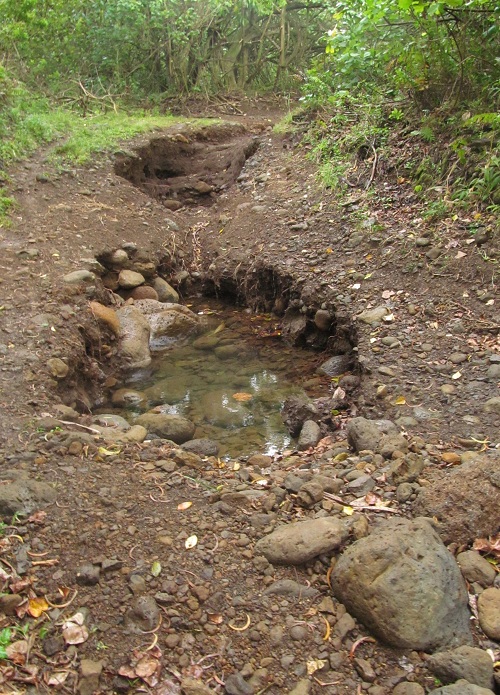 We were surprised to come across 2 freshly gouged holes in the road caused by the rain storms in March.  There must have been a raging torrent on the road to make these holes. 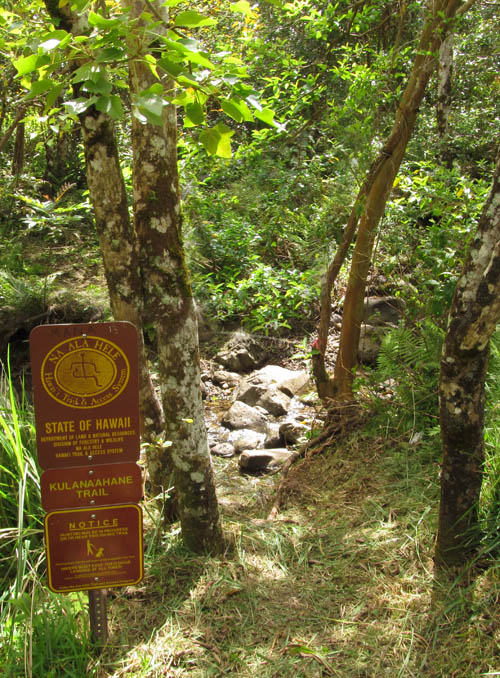 When we reached the start of the Kulanaahane Trail, I bid farewell to August and Danielle, and made my way up the trail to join the trail clearers. 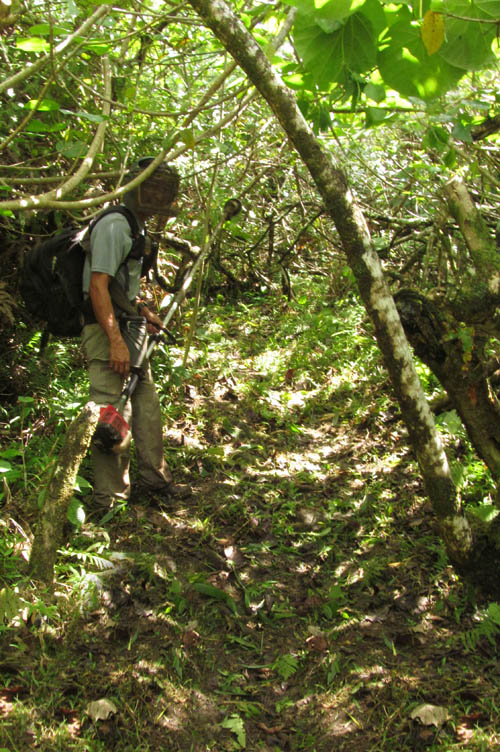 The first person I ran into was Kenji Suzuki who was busy weed whacking the beginning of the Kulanaahane Trail where hau trees grow. 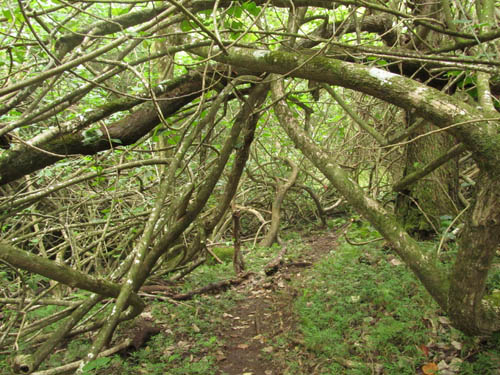 Hau trees (Hibiscus tiliaceous) are indigenous and create an impenetrable thicket if their branches are not cut back regularly.  A good deal of the crew’s effort was spent cutting back the branches to keep the trail open. 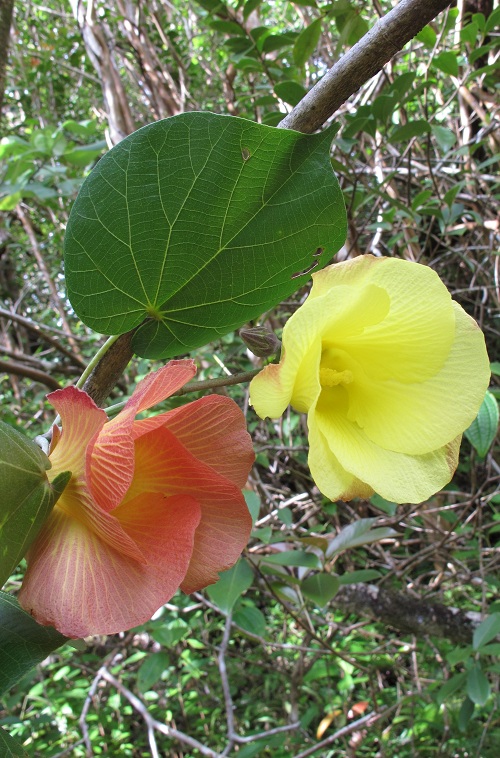 The cool thing about hau flowers — which look like hibiscus except that the petals do not open up all the way — is that they start-off yellow in color and turn red over the course of several days. 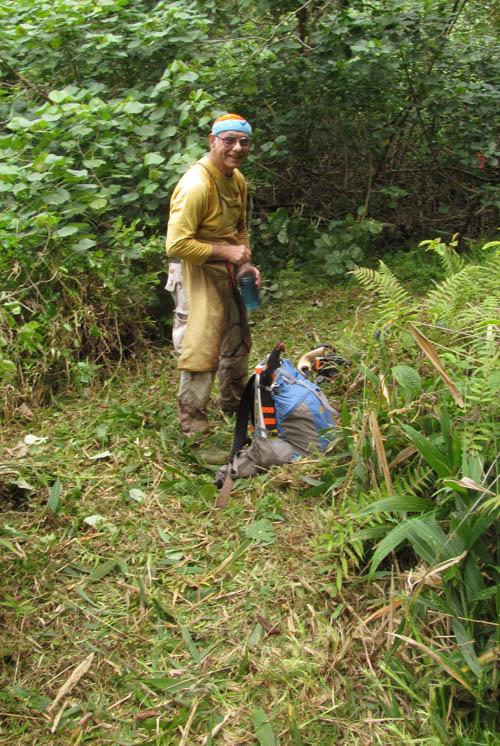 The next person I caught up to was Gordon Muschek who was taking a water break from weed whacking the palm grass and other plants that infringed the trail. 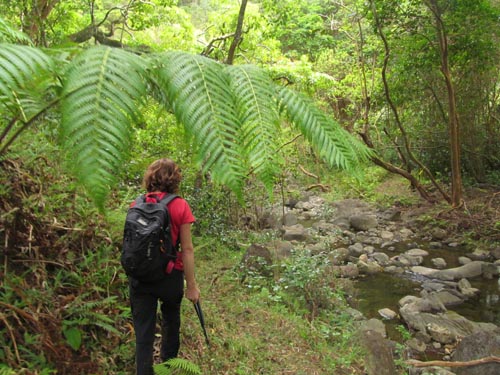 When I reached the next stream crossing, I came across Thea Ferentinos under a hapuʻu fern (Cibotium chamissoi) who was busying lopping the many strawberry guava and hau branches that blocked the way. 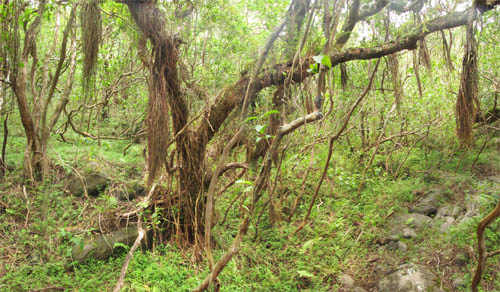 When we reached an ʻōhiʻa tree (Metrosideros polymorpha) with aerial roots, I had to stop to photograph and admire the odd sight. 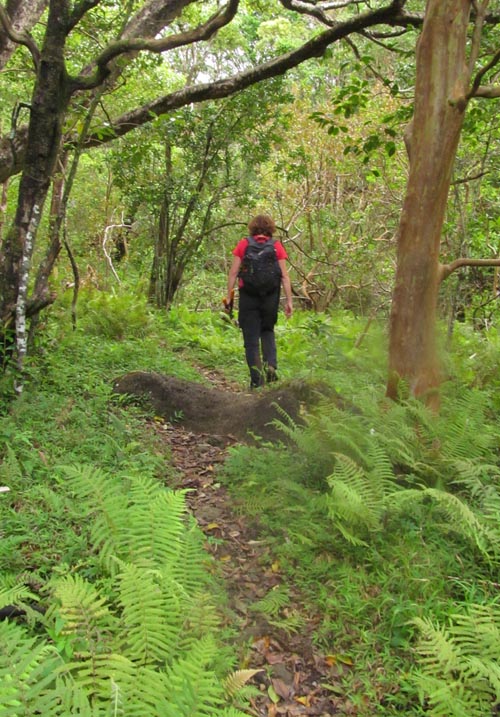 Some sections of the trail did not require any work at all — but that was more the exception than the rule. 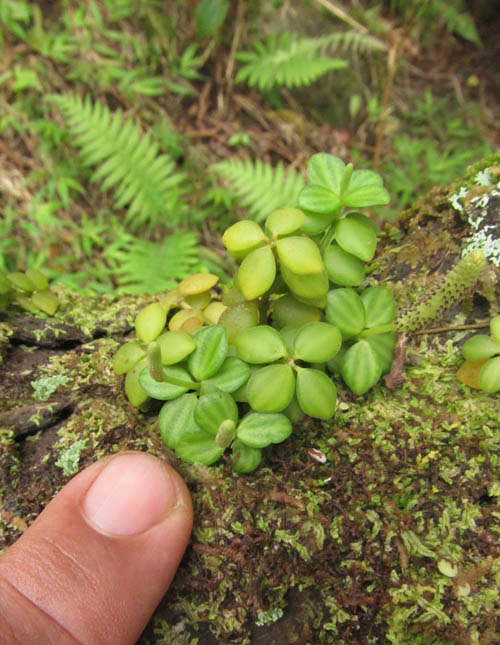 One of the cool endemic plants I stumbled on was a miniature form of ʻalaʻalawainui (Peperomia tetraphylla) growing on a lama tree that was smaller than the fingernail on my index finger. 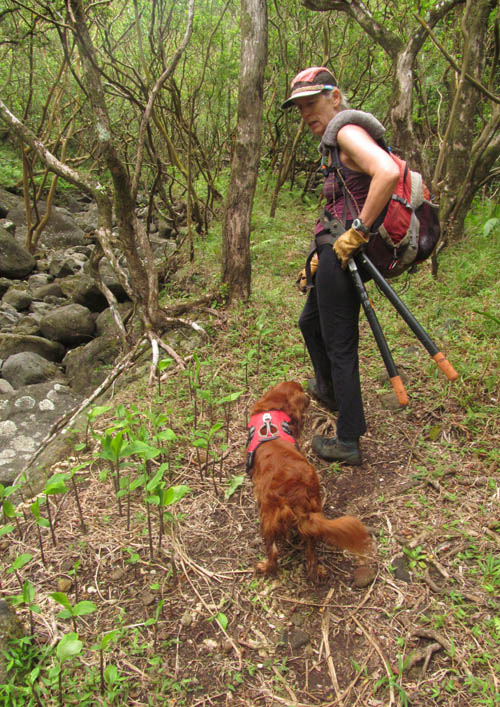 While making my way up the trail, I stumbled on Kris Corliss and her dog Rusty who were lopping-off guava and other branches that blocked the trail. 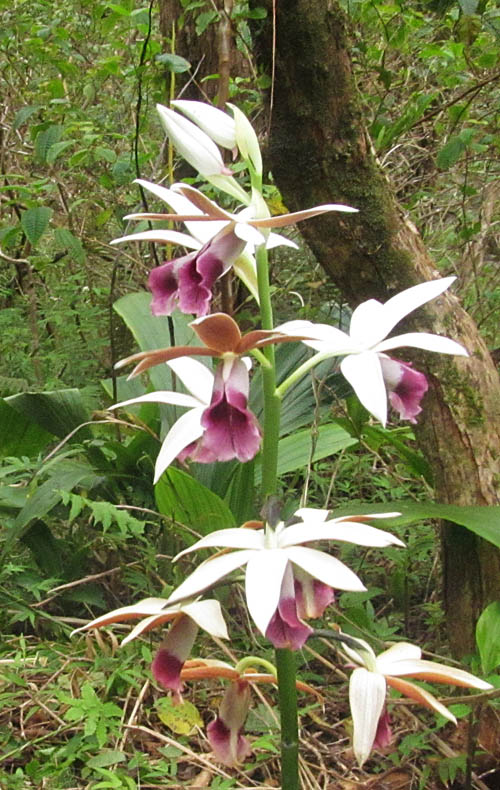 One of the more eye-catching sights on the trail were introduced Chinese ground orchids which put up spikes of flowers several feet off the ground. 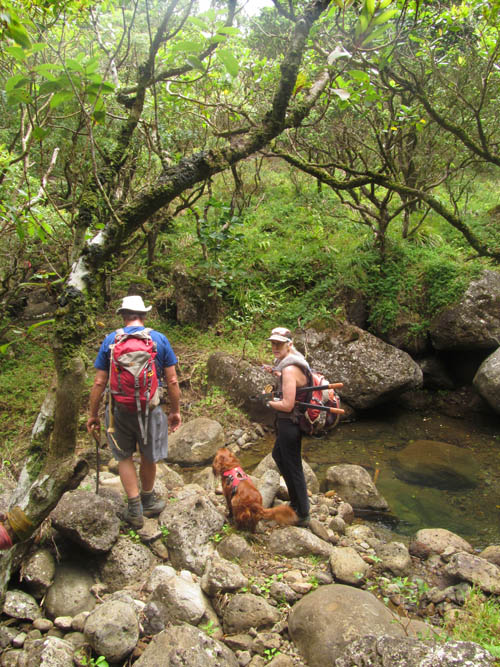 Water flowed from one pool to the next — which was quite different from the last time I was here in January. 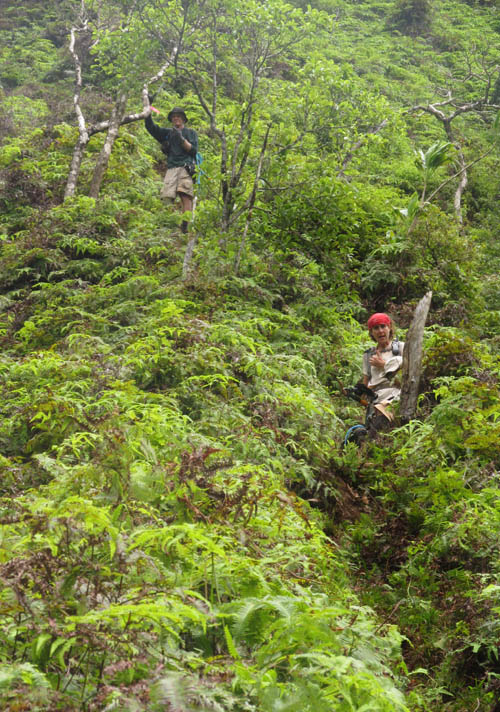 When we reached the final steep climb up to the summit, I spent considerable effort cutting back the uluhe ferns that encroached the trail. 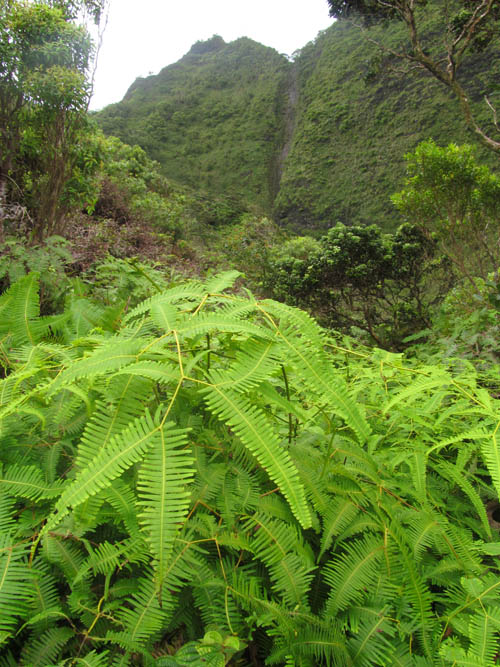 We could see a prominent dry waterfall chute as we hacked at the uluhe on our way up to the summit. 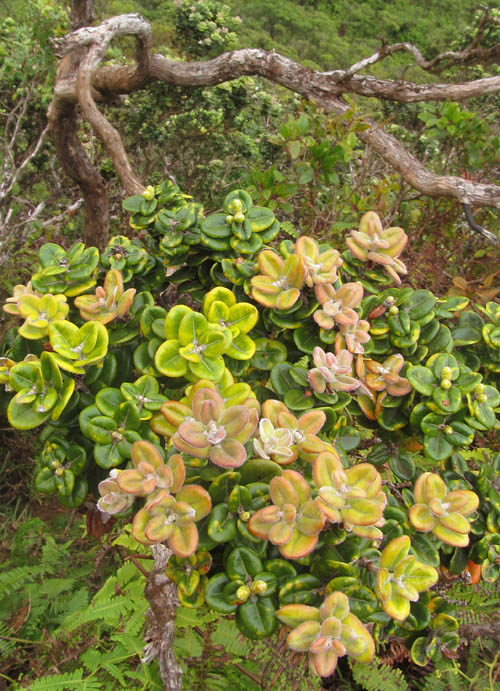 One of the sights that caught my eye were an array of colorful liko lehua — the young leaves of ʻōhiʻa. 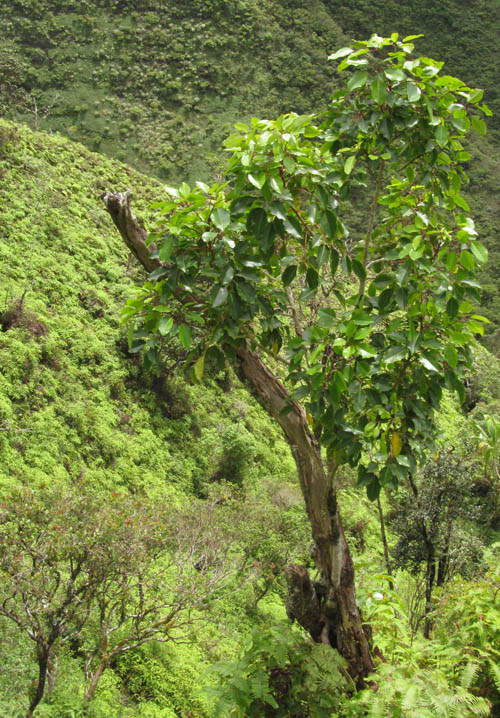 We continued cutting back the ferns as we passed a charming ʻolapa tree (Cheirodendron  trigynum) near the top. 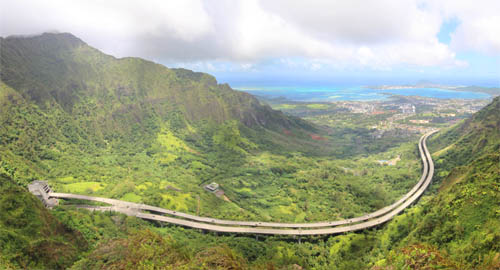 When we reached the Koʻolau Summit Ridge we were treated to spectacular views on the other side of the island!  We admired the graceful curve of H-3 in Haiku Valley below, the blue waters of Kāneʻohe on the coast, and Mokapu Peninsula off in the distance.

We soaked in the views from the Moanalua Saddle, ate our lunches, and enjoyed each others company for quite some time before turning around to return the way we had come.

While descending the summit to return where we started I reflected on the great time we had seeing water flow restored to the stream, spectacular views from the summit, and cool native plants along the way.  What a great hike!