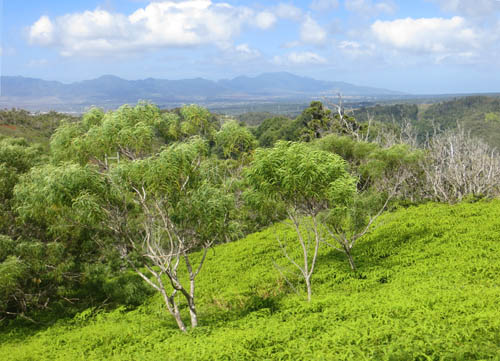 I joined the trail maintenance crew of the Hawaiian Trail and Mountain Club (HTMC) to clear the Halapepenui Trail which overlooks Pearl City in the Koʻolau Mountains of Oʻahu.

The Halapepenui Trail is a 6.6 mile loop above Pearl City which can be accessed from four different trail heads — Waimano Home Road (Waimano Ridge), Kaʻahumanu Street (Waiau Ridge), Hapaki Street (Newtown Estates), and Kaʻahele Street (Royal Summit).  There are also a number of hunter trails that veer-off from the loop which makes navigating the loop confusing unless you know the way.

The loop crosses several adjacent low ridges and shallow valleys — the elevation gain from the lowest to the highest point is less than 800 feet.  Much of the rolling ridge tops are covered with native uluhe ferns and koa trees and provide charming views of Pearl Harbor and Central Oʻahu. 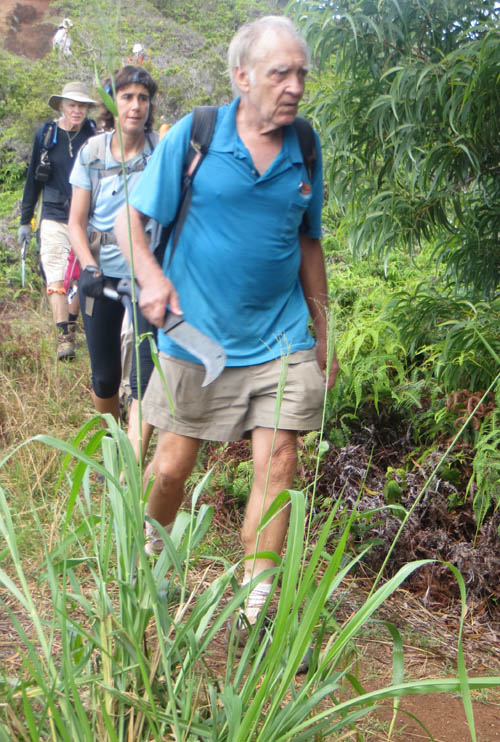 The trail clearing crew split up into smaller groups and attacked the loop from multiple trail heads and directions.  I joined the group that started from the end of Hapaki Street and hiked in the counterclockwise direction. We were lucky to have hiking veteran Fred Boll — who knows the trails above Pearl City like the back of his hand — lead us through the jumble of interconnected trails. 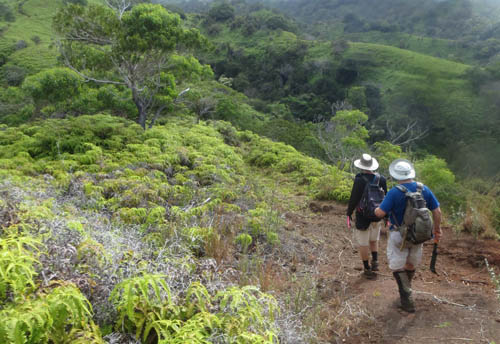 After making our way up the ridge, we dropped down into a shallow valley where we chopped and removed fallen albezia tree branches that had fallen onto and blocked the trail.  We also hacked at invasive strawberry guava and fountain grass that infringed the margins of the trail. 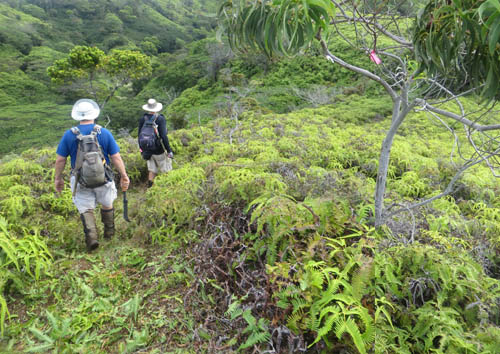 After ascending an uluhe covered hill we can across the remains of chopped uluhe ferns from the weed whacking group in front of us who started from Kaʻahumanu Street. 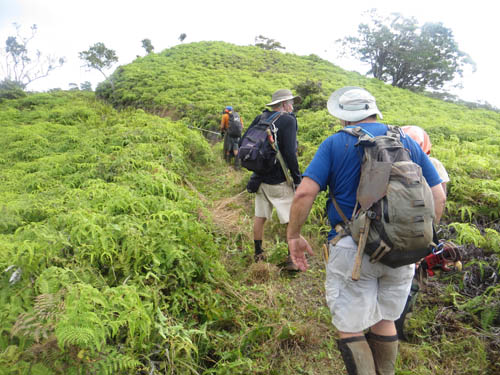 Right before we reached the top of the next hill we came across the weed whacking group. 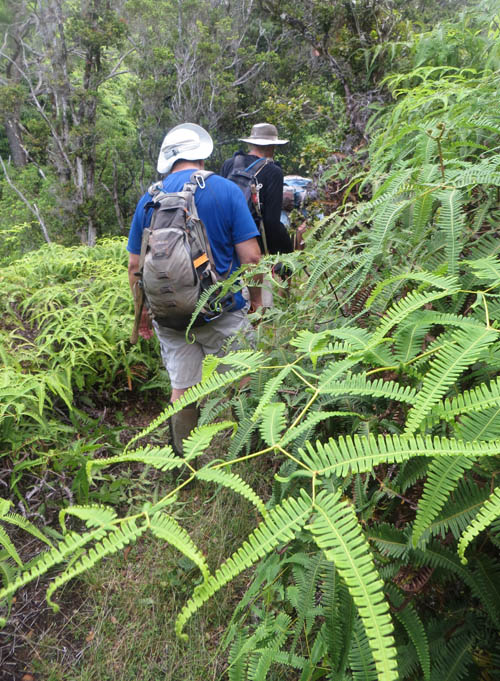 Uluhe ferns (Dicranopteris linearis) have long bifurcating fronds that grow like crawling vines.  The fronds interweave with each other and can create a formidable barrier that is a difficult to pass. 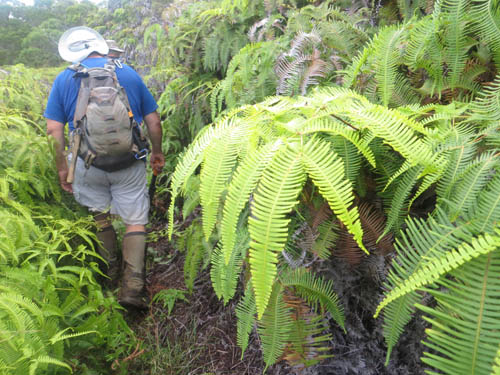 Since we knew the weed whacking group would make quick work opening up this portion of the trail, we pushed onwards towards the connector with the Waimano Trail where the uluhe blockage was worst. 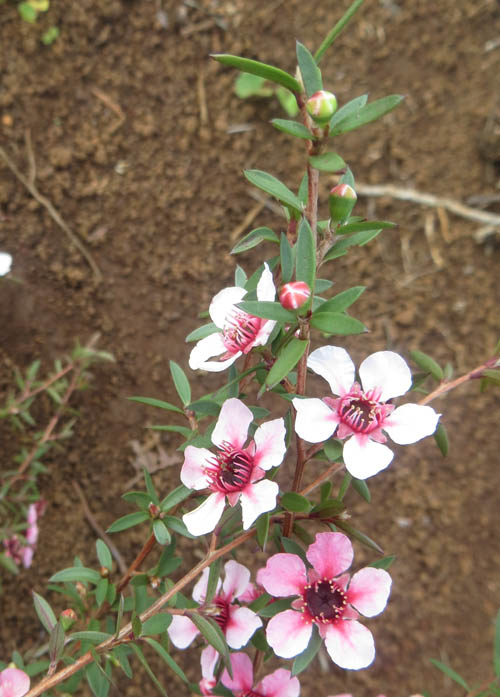 Along the way, we came across a number of manuka or Australian Tea (Leptospermum scoparium) — an invasive plant with small pink or white flowers.  We pulled the plants out by the root where possible but but some of them were too large and deeply rooted so we just cut them down. 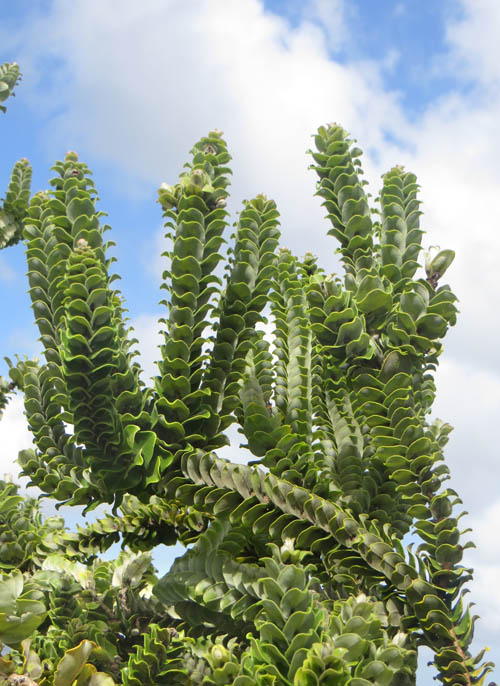 One of the more interesting plants we saw was a form of ʻōhiʻa lehua formerly classified as “Metrosideros imbricata” before the plant group was reorganized into “Metrosideros polymorpha” by botanists.  The plant’s stems are completely covered with tightly packed leaves stacked one on top the other. 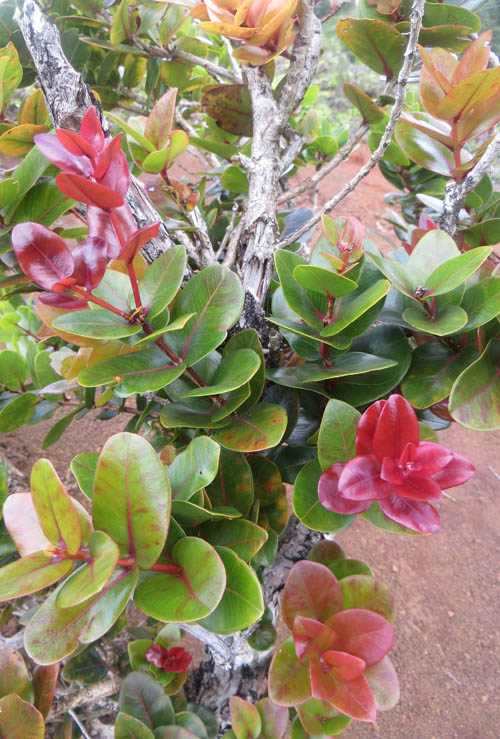 Imbricata looks so different from this ʻōhiʻa lehua (Metrosideros polymorpha) with red liko (young leaves) that who would think there are the same species?  “Polymorpha” means “many forms” and aptly describes the different forms the species can take. 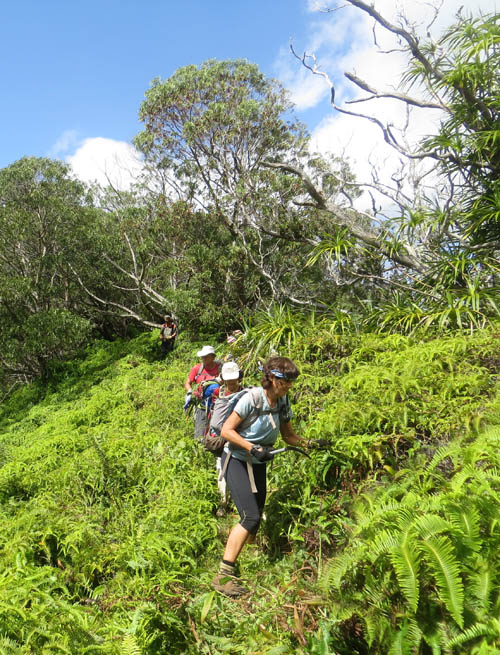 After making our way a couple of miles further — beyond the reach of the weed whackers — we  took out our sickles, machetes, loppers and other implements to cut back thick uluhe that blocked the trail. 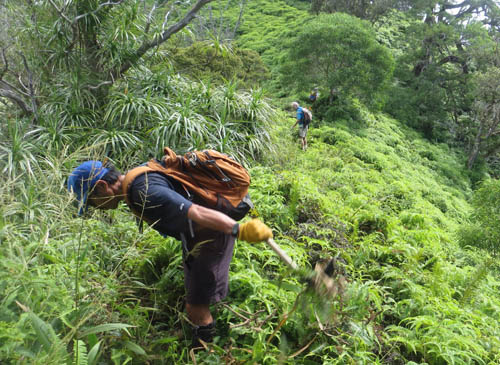 We passed a number of trees where ʻieʻie (Freycinetia arborea) had twisted themselves up the trunks and branches of trees alongside the trail. 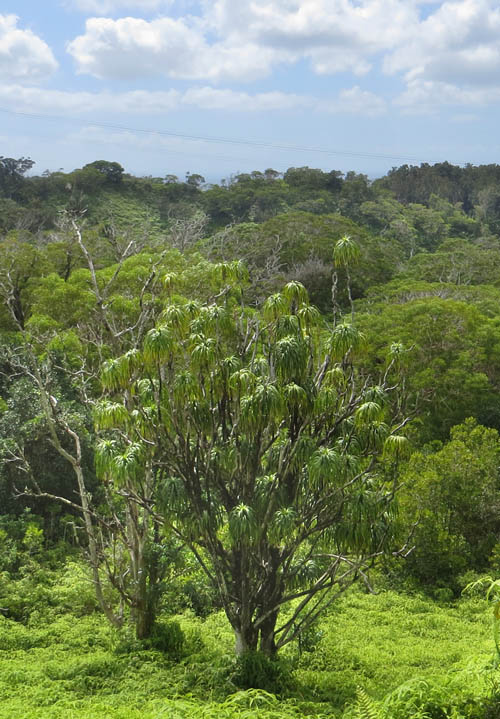 After we passed the connector with the Waimano Trail, we reached a big halapepe tree — for which the Halapepenui trail is named.  “Nui” means “big” or “great”.  Halapepe resemble ʻieʻie but are actually very different.  This particular specimen could potentially be Pleomele halapepe which is endemic to the island of Oahu but my untrained eye is not sophisticated enough to discern one halapepe species from another. 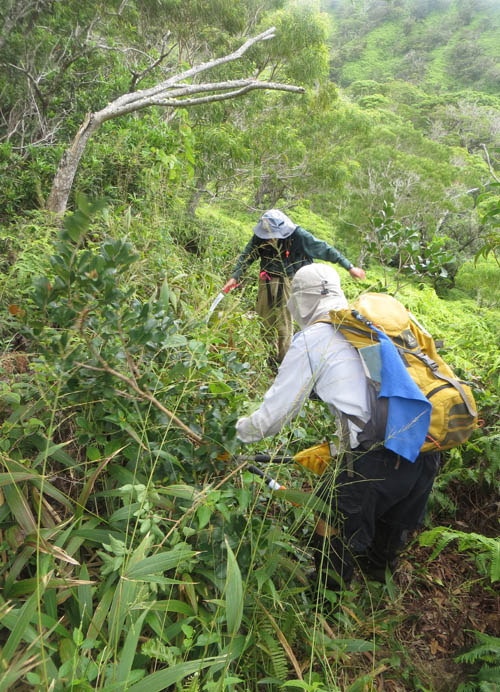 After chopping our way through some of the thickest uluhe we encountered all day, we were pleased when we ran into John Hall — who also knows the trails above Pearl City like the back of his hand. He led a group of trail clearers in the clockwise direction on the loop and we were pleased when we met up with them — our work was almost done! 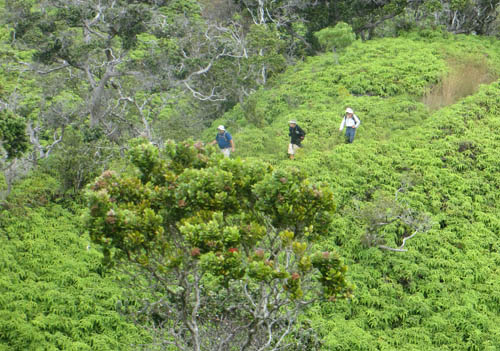 When we reached the junction with the Waiau Trail, we put away our tools and spent the remainder of the day hiking from one charming uluhe and ʻōhiʻa covered hill to the next. 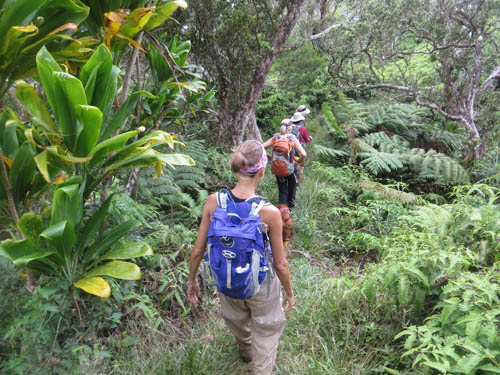 Several sections of the loop are frequented by motorcross bikers and the constant use by motorized vehicles keeps the trail open. 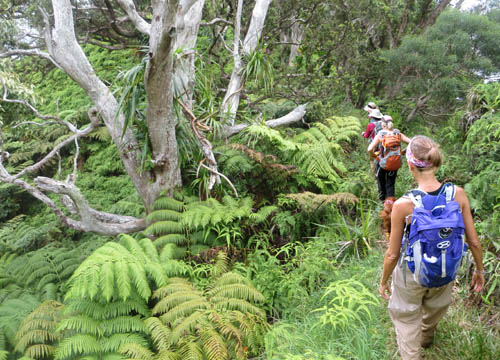 We enjoyed hiking through ʻōhiʻa and koa trees with ʻieʻie vines and hapuʻu and uluhe ferns in the understory. 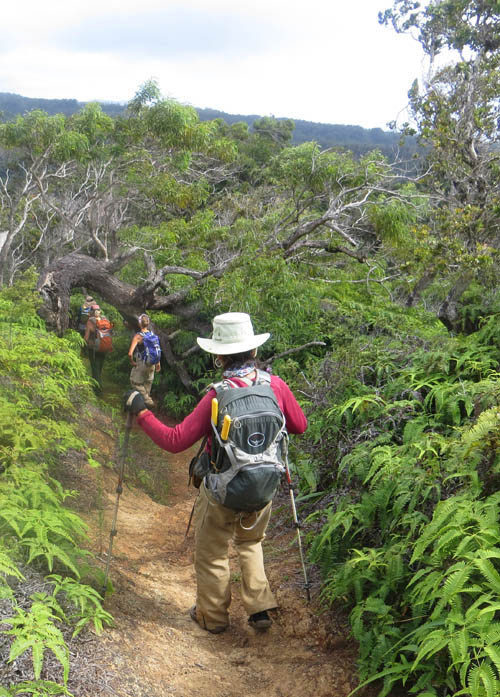 One of the more unusual sights was a koa tree whose trunk was bent over forming a natural arch we hiked under. 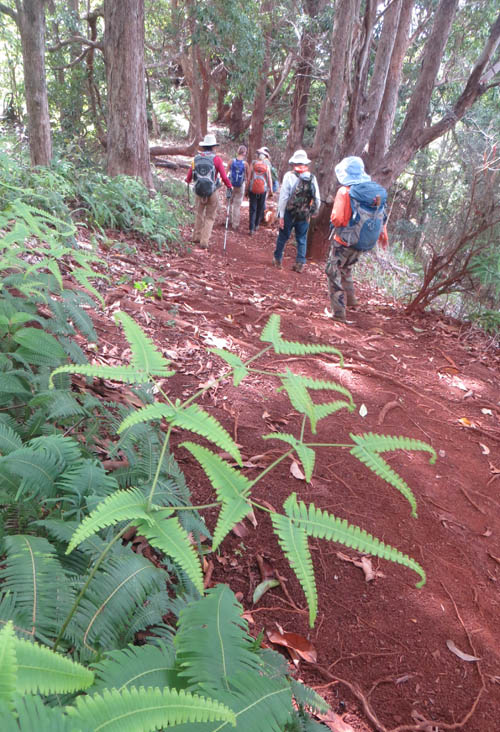 When we descended to a grove of eucalyptus and other introduced trees, we knew the end was near.  As we completed the loop and made our way back to Hapaki Street, I reflected on the great time we had hiking up and down rolling hills covered with native uluhe ferns, koa trees, and ʻōhiʻa trees.  What a great hike!