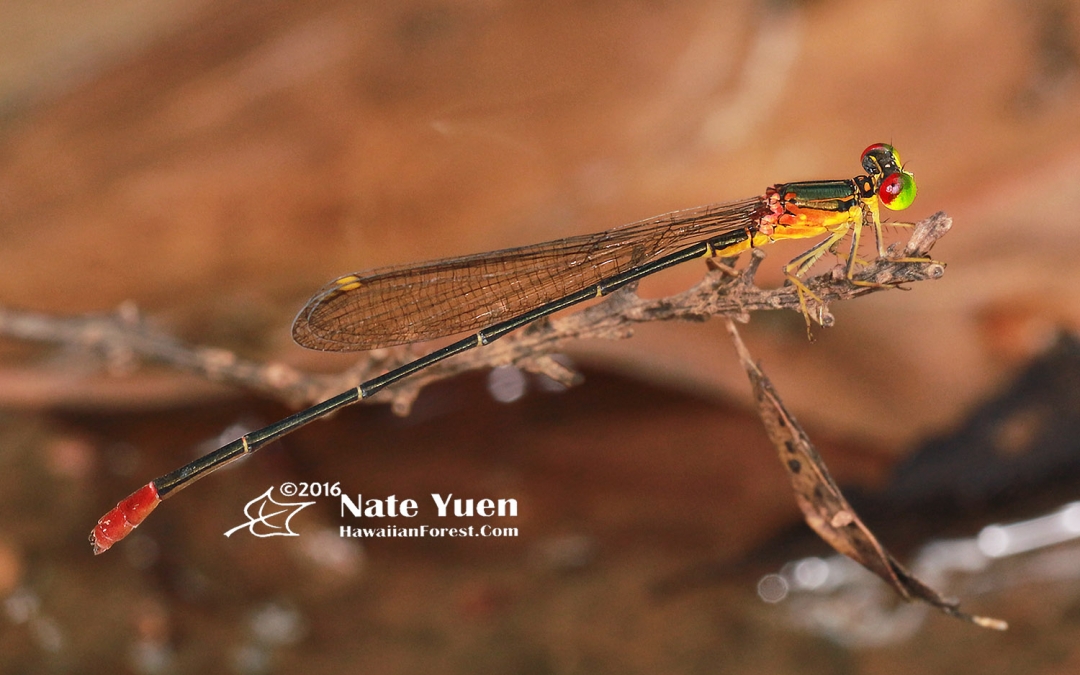 A previously unknown population of Blackline Hawaiian Damselflies is the subject of concern with the proposed expansion of Hawaiian Memorial Park (HMP). 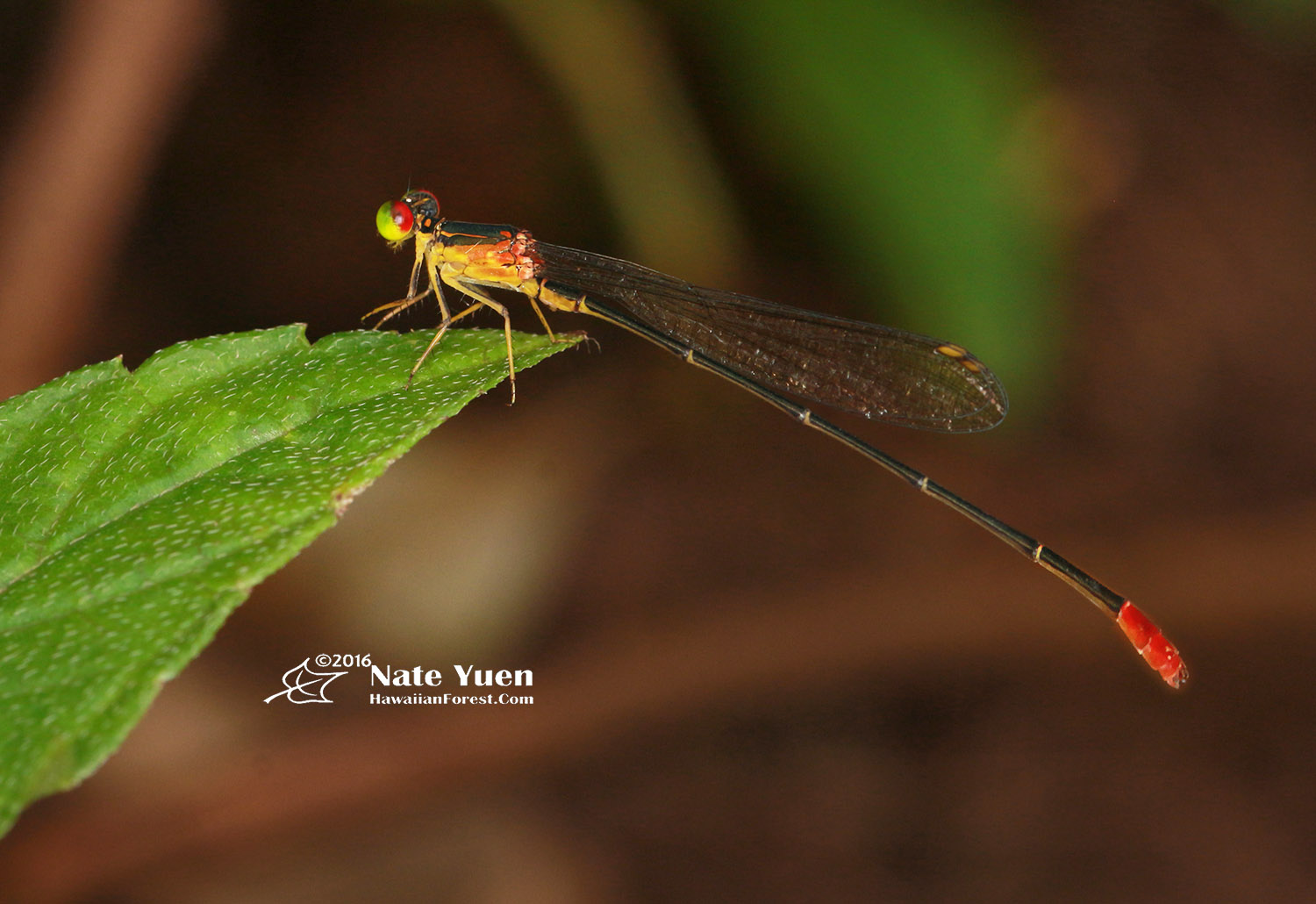 This male damselfly is just under 2 inches in length and has a long thin segmented abdomen with a red tip. The large eyes of this damselfly are red, green, and yellow.

In June 2016, Liam Gray took me and several windward residents – Patrick Shea, Grant Yoshimori, Caitlyn Yoshimori, Rich McCreedy, and Julie McCreedy – to see the endangered damselflies he discovered in Kāneʻohe. Liam lives in a neighborhood bordering HMP where he found a previously unknown population of Blackline Hawaiian Damselflies — Megalagrion nigrohamatum nigrolineatum.  I was immediately captivated by these colorful damselflies and was spell-bound photographing them. 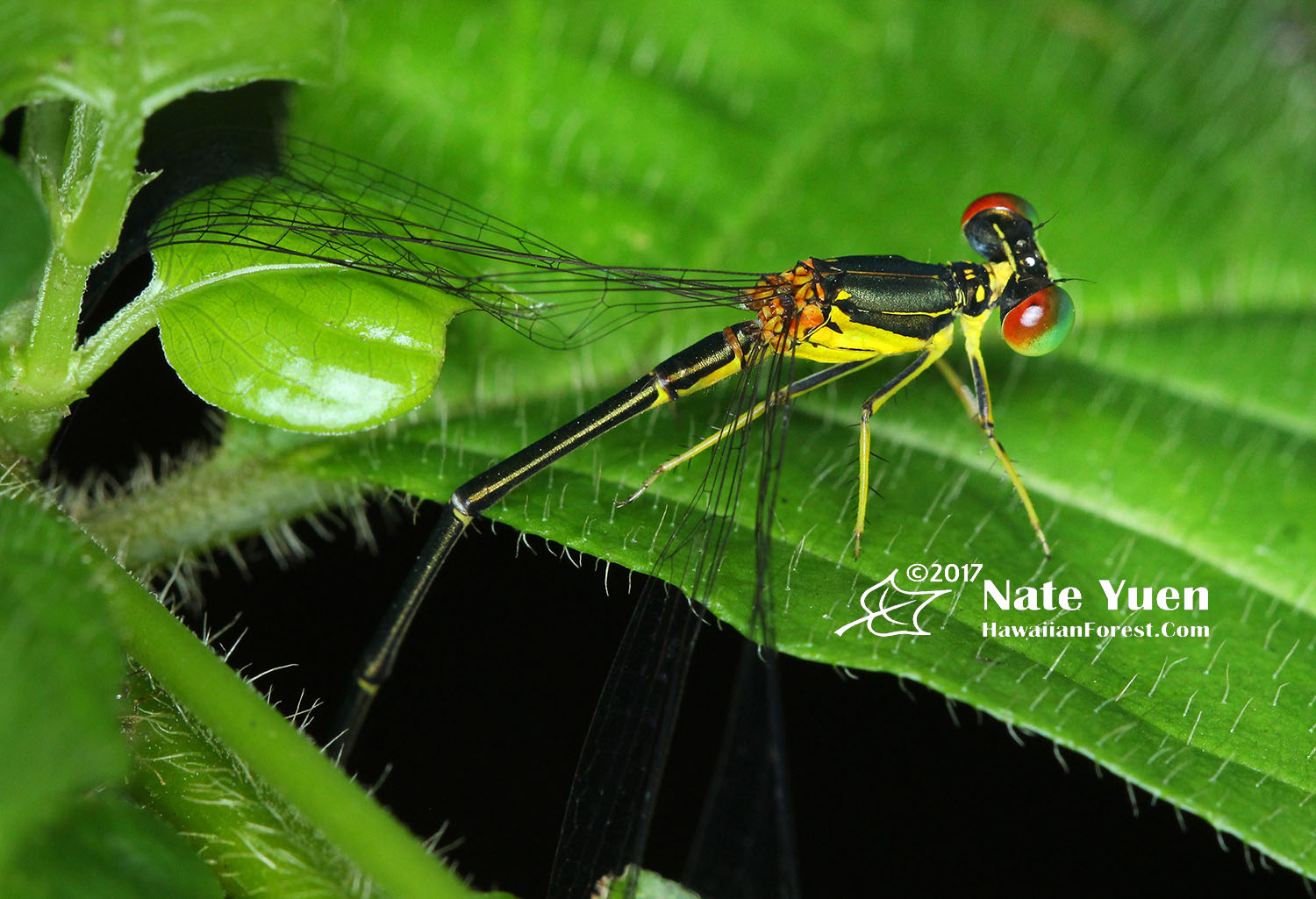 There is considerable variation in their color. There are several color morphs.  This male damselfly has a thorax that is yellow-black.

I was surprised to see these damselfies in Kāneʻohe. I had previously only seen this species of pinapinao in native forests and streams above 2,000 feet elevation in the Koʻolau Mountain. I did not expect to see them at this low elevation in Kāneʻohe under alien trees – scheflera, albezia, strawberry guava, and other non-native vegetation.  Damselflies are pinapinao in Hawaiian.  There is an intriguing entry in the Pukui/Elbert Hawaiian dictionary for this damselfly — pinapinao ānuenue — the rainbow-eye damselfly. 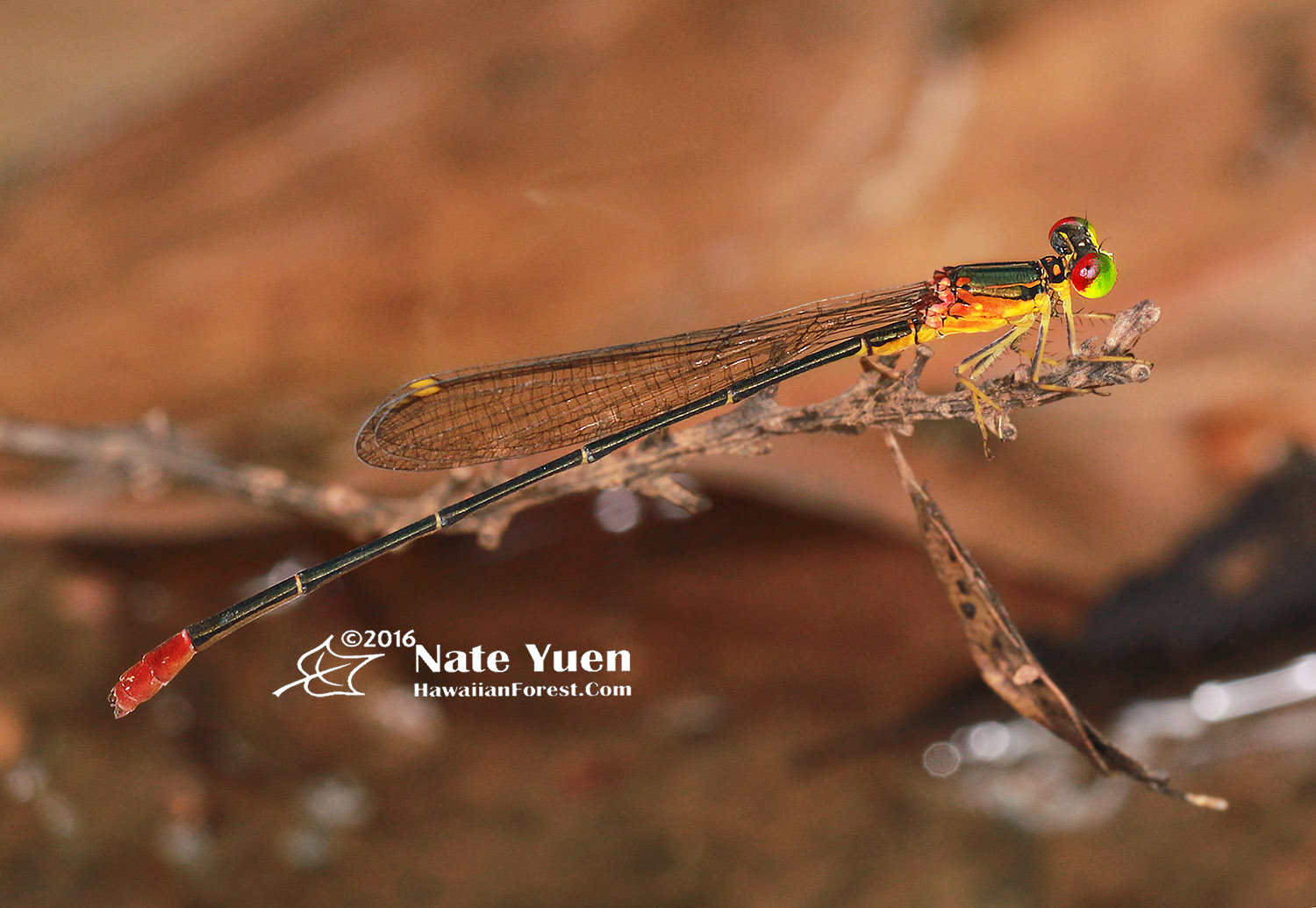 This male is the most common morph — it has round eyes that are red, green, and yellow, and a thorax that is orange-yellow-black.  The grabber on the red tip at the end of the abdomen indicates that this is a male..

I contacted Hawaiian damselfly expert Dan Polhemus at US Fish & Wildlife and brought him to the site. He did the research to get this and several other damselfly species listed as endangered species. Dan Polhemus confirmed that this was a previously unknown population of Blackline Hawaiian Damselflies — Megalagrion nigrohamatum nigrolineatum.  Dan was also surprised to see these damselflies at this low elevation. He said that this species is endemic to Oʻahu and once inhabited the streams and wetlands throughout the island at all elevations. But they are rare today with less than 1,000 are estimated to remain. Loss of habitat has been the biggest reason for their decline. Today they are only found at high elevations in the Koʻolau Mountains except for this population in Kāneʻohe. For some inexplicable reason this population managed to survive at low elevation at this site. 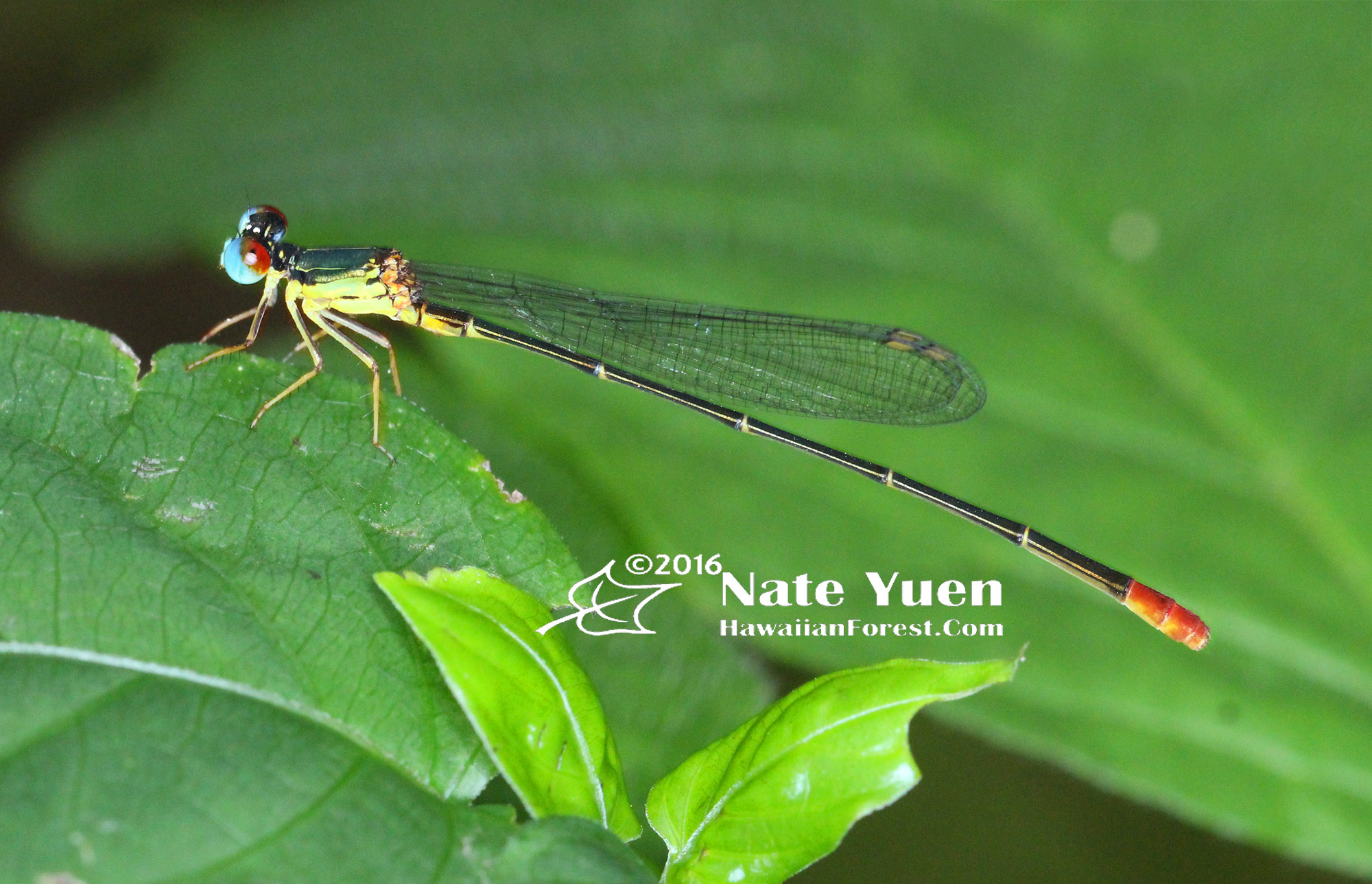 This female has large round eyes that are red on top and blue on the bottom. Females do not have a grabber at the tip of their abdomen.

The damselflies live on conservation land owned by HMP which is governed by the City and County of Honolulu’s Koʻolau Poko Sustainable Communities Plan. The plan guides all new public and private development with the Koʻolau Poko District in a manner consistent with the Oahu General Plan. The purpose of the plan is to prevent the spread of undesirable development on the windward side of Oʻahu from Makapuu to the northern end of Kāneʻohe Bay. 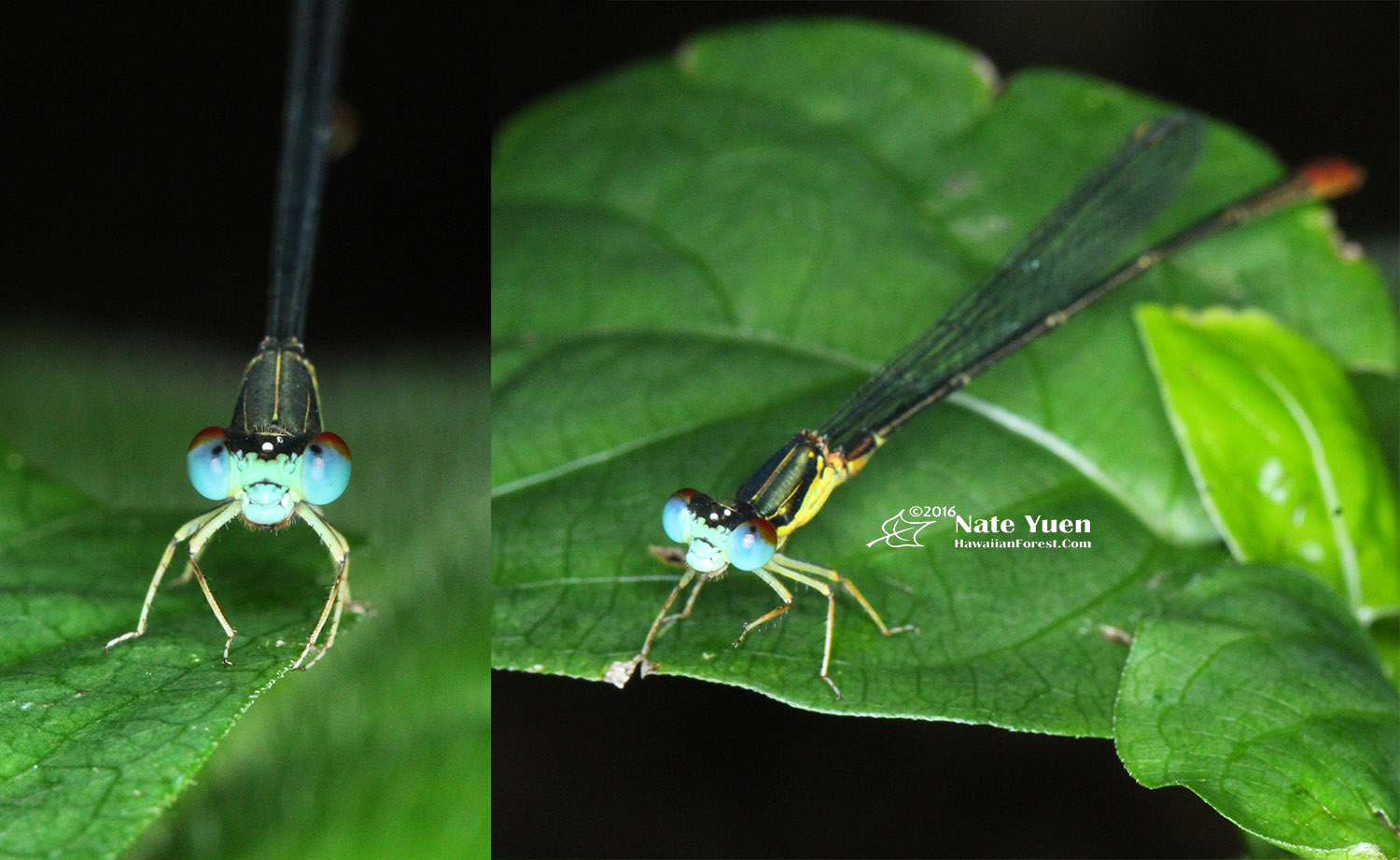 Damselflies are fierce predators that feed on other insects. This female has strong powerful jaws to chomp and eat prey.

HMP became aware of the damselfly population at the Kāneʻohe Neighborhood Board meeting on July 20 2017.  They did not have a chance to survey the proposed expansion area to learn the extent of the damselfly population on their property when HMP appeared before the Honolulu City Council on August 1, 2017.  As a result, I testified on behalf of the Sierra Club that it was premature to approve HMP’s expansion plan. Only upon the completion of an entomological survey under an environmental impact statement would HMP be able to design the expansion to avoid harming this previously unknown population of damselflies.  These colorful damselflies are part of Hawaii’s unique insect fauna and need to the protected. 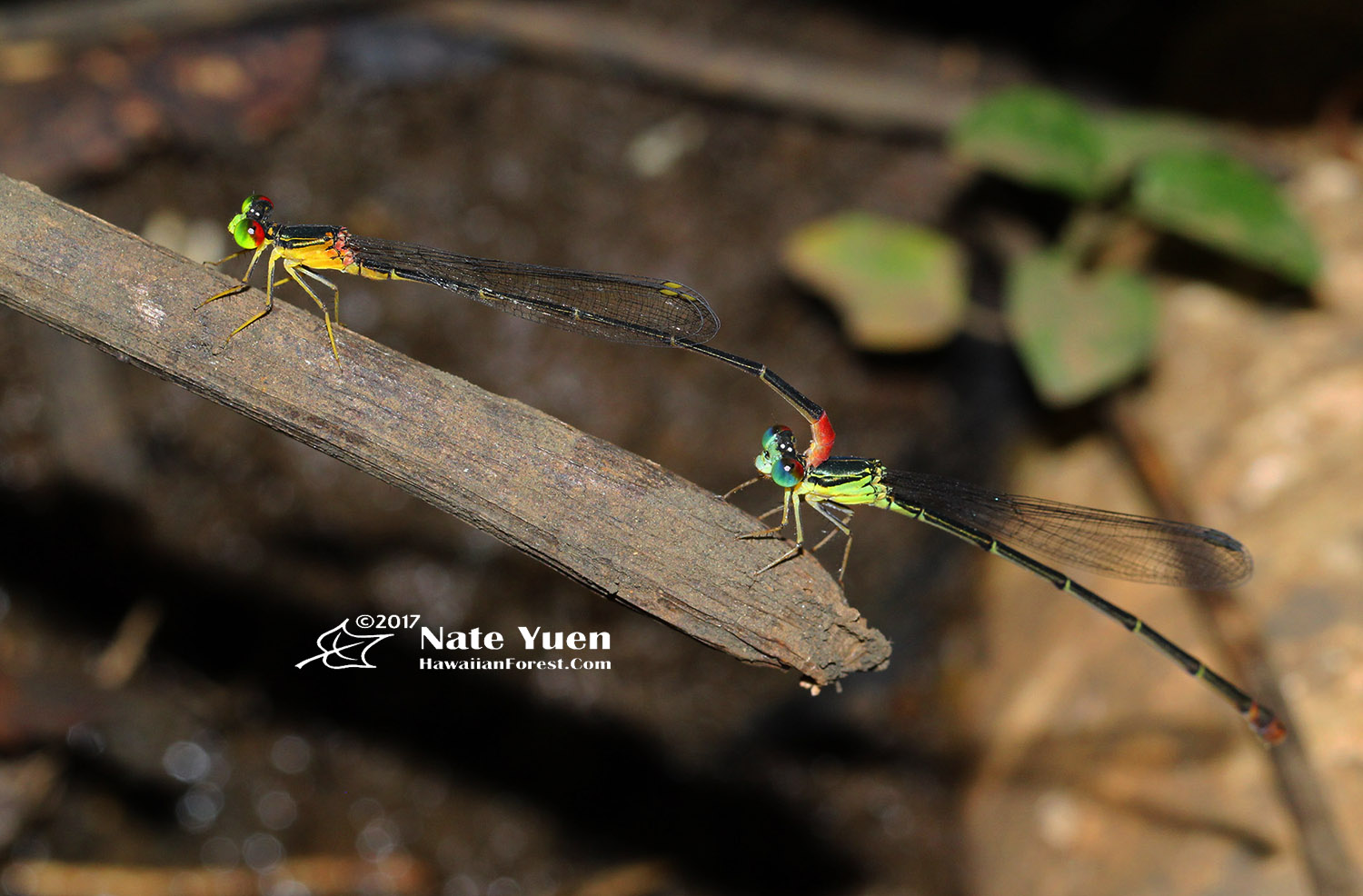 The courtship behavior of pinapinao ānuenue — the rainbow-eye damselfly — is fascinating to watch.  Males use the grabber at the end of their abdomen to grasp on to females just behind the head when mating.

HMP showed themselves to be a good member of the community.  HMP donated a portion of their land to the State of Hawaii for a veteran’s cemetery.  HMP announced that they as part of the expansion they will grant a conservation easement to the Ko’olau Poko Hawaiian Civic Club for the land where Kawa’ewa’e Heiau resides to create a cultural preserve.  HMP also offered assurances that they would protect this endangered damselfly population. 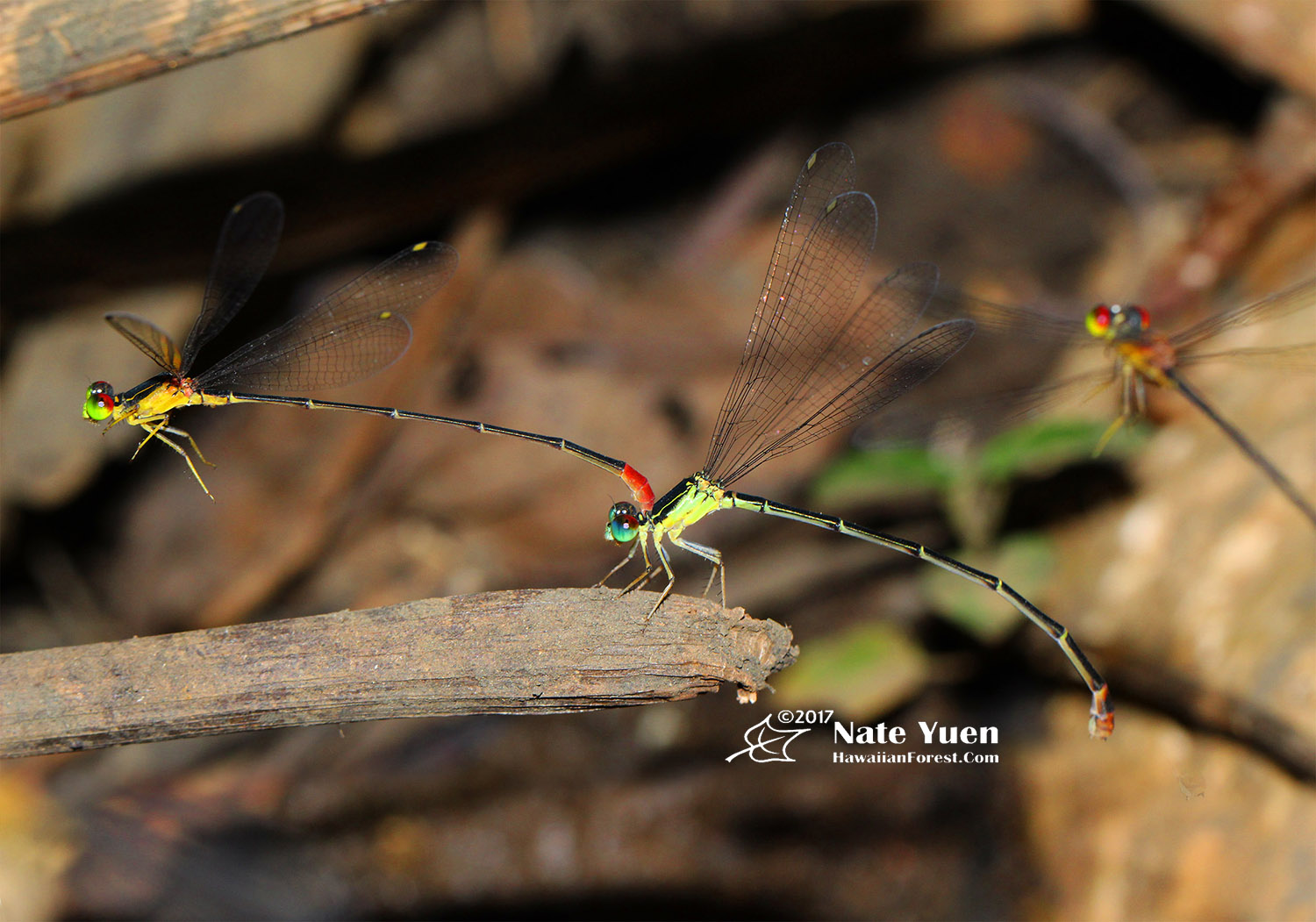 A rival male darts in to interrupt a pair of mating pinapinao ānuenue. 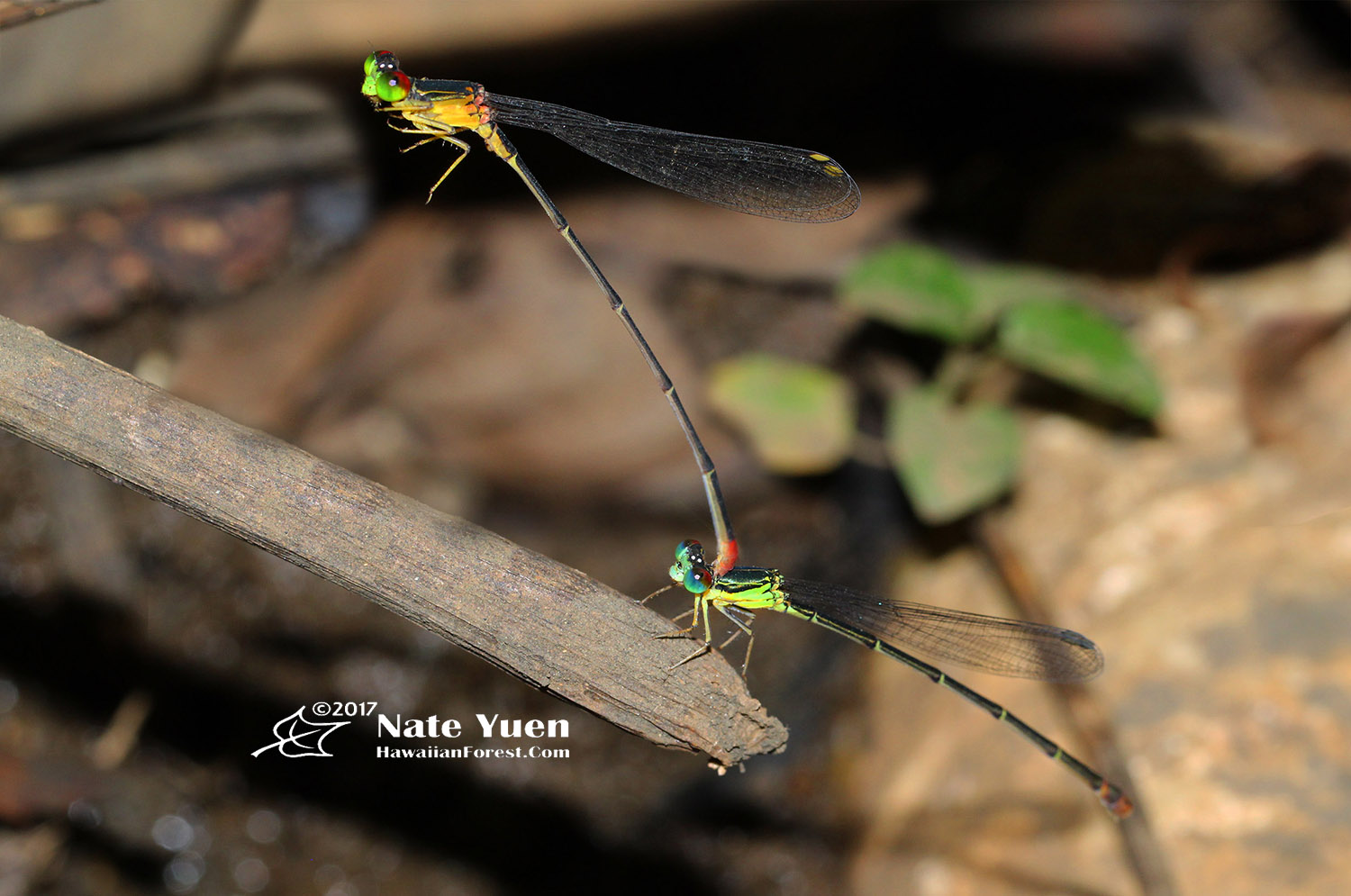 Males will sometimes stand erect in mid-air while mating held in place by his grabber.

The next step will be for HMP to complete an entomological survey as part of an environmental impact statement. Once HMP determines where the damselflies live they can plan the expansion to avoid the damselfly population and to mitigate any negative impacts when the cemetery is expanded. The plan will go before the State Land Use Commission which is tasked with approving or disapproving the rezoning plan to permit cemetery expansion. 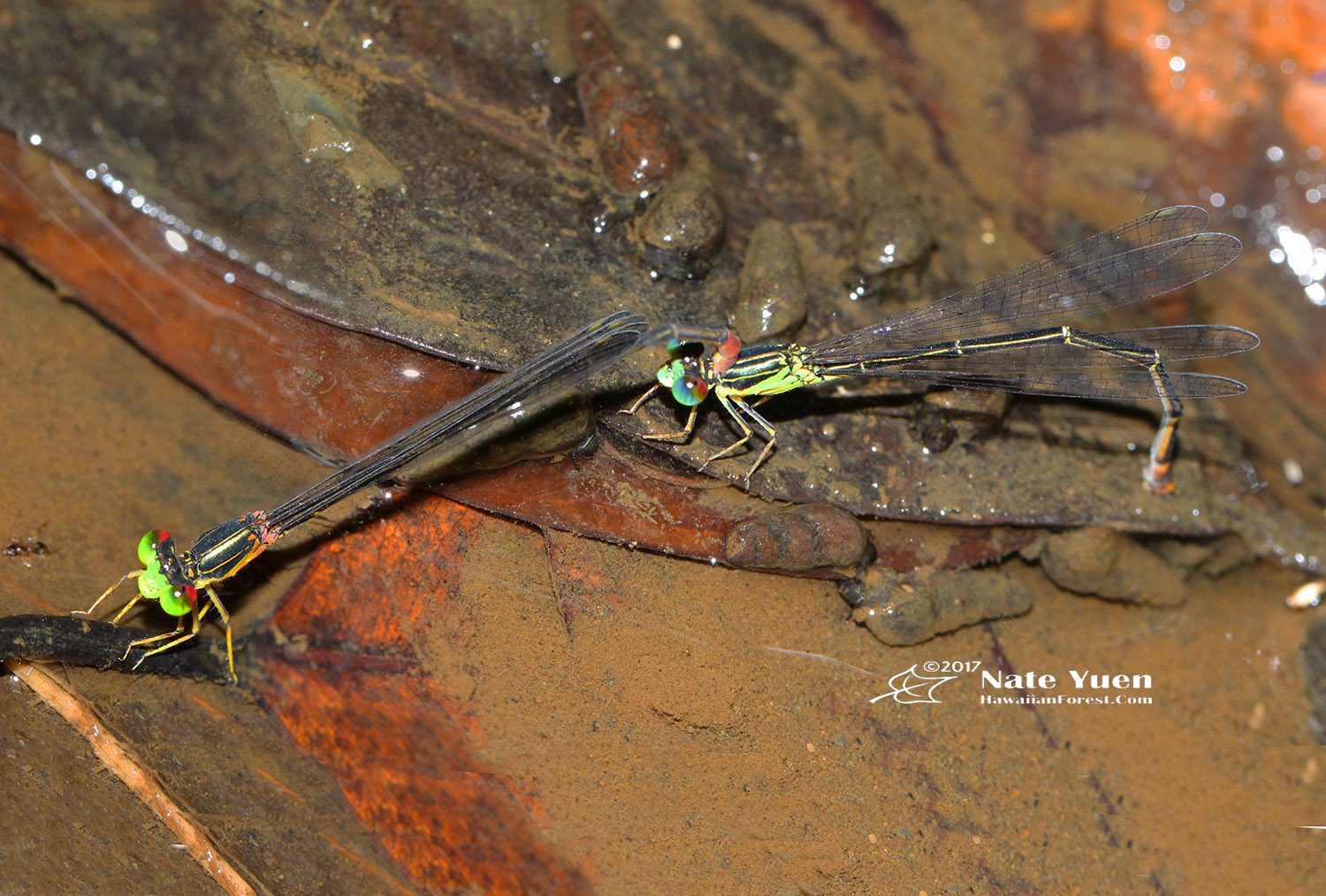 After the female is fertilized the pair fly to water where she curls her abdomen and lays eggs underwater.

I hope that a buffer will created around this damselfly site and that measures will be instituted to prevent run-off, pesticides, and harmful substances from inundating/destroying/degrading the habitat during construction as well as when the cemetery is operational. These pinapinao ānuenue are beautiful creatures found only on Oʻahu and are integral to the natural and cultural heritage of Hawaiʻi. I will follow-up with the Sierra Club to ensure that this low elevation population of endangered rainbow-eye damselflies survives.