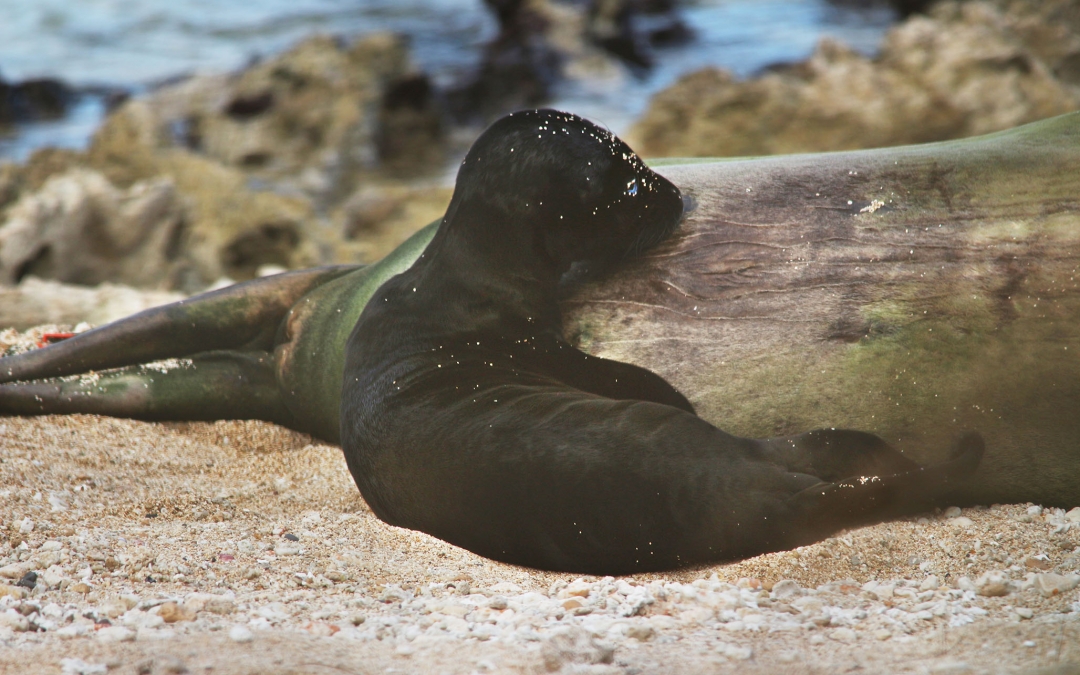 Honeygirl gave birth to a Hawaiian Monk Seal baby on February 25, 2015 — the first known pup born in the main Hawaiian Islands for the 2015 birthing season.  The pup was female — a cute baby girl.  I visited the seals 4 times over the almost 7 week period to see the pup grow until it was weaned 45 days later.

Hawaiian Monk Seals — Monachus schauinslandi — are critically endangered sea mammals endemic to the Hawaiian Islands.   The Hawaiian Monk Seal Research Program records each birth and tracks all known seals through their lives.   This was Honeygirl’s 9th pup, most of which were born on the North Shore of Oahu at Turtle Bay.

I learned about the birth from Angela Huntemer — who keeps a watchful eye on the wildlife on the North Shore — and visited Honeygirl and her pup on the 4th day after its birth on Sunday, March 1.  Pups are about 3 feet long and weigh about 30 pounds when they are born.  Mothers are nearly 7 feet long and weigh an estimated 450 pounds. 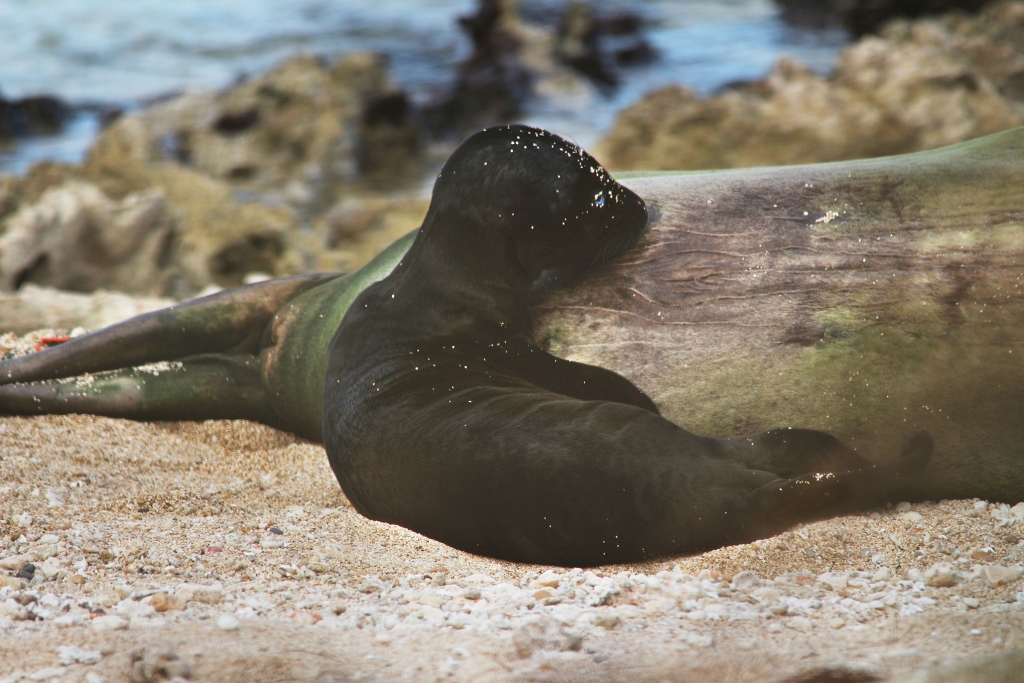 Baby Hawaiian Monk Seals have big eyes and are covered in a soft black fur.  I spent hours watching the pup nap, flop around on the sand, and nurse. 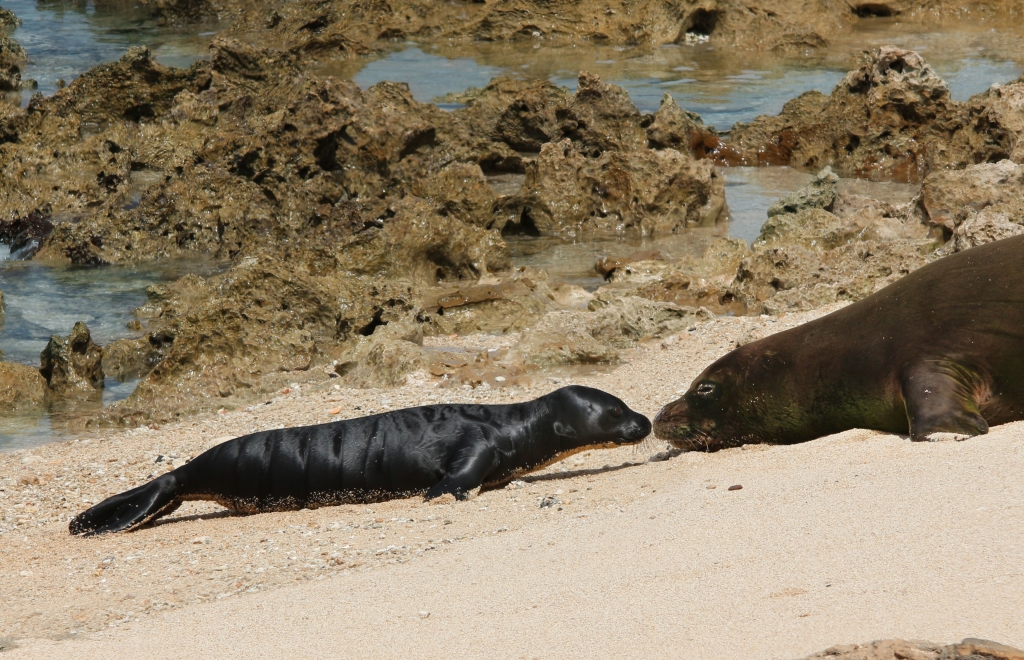 I returned the next weekend on the 10th day after the pup’s birth on Saturday March 7 to see that the pup was noticeably longer and had gained weight.  Seal milk is high in fat and is almost the consistency of yogurt.  It is packed with nutrients and enables pups to gain weight rapidly.  I spoke to one of the seal watch volunteers and learned that the pup was given the name Ola Loa.

There are only about 1,100 Hawaiian monk seals left in the world and their numbers are dropping 3-4% a year.  Most live in the Northwest Hawaiian Islands with only 200 in the main Hawaiian Islands.  Their greatest risk is entanglement in nets, fishing lines, and other derelict fishing gear.  In 2006, one of Honeygirl’s pups — Penelope — got entangled in a gill net and drowned.  So did Hoku — another one of Honeygirl’s pups — who died in 2008.  In 2012, Honeygirl got a hook lodged in her mouth which caused an infection.  Surgery has performed and Honeygirl recovered from the potentially life threatening infection . 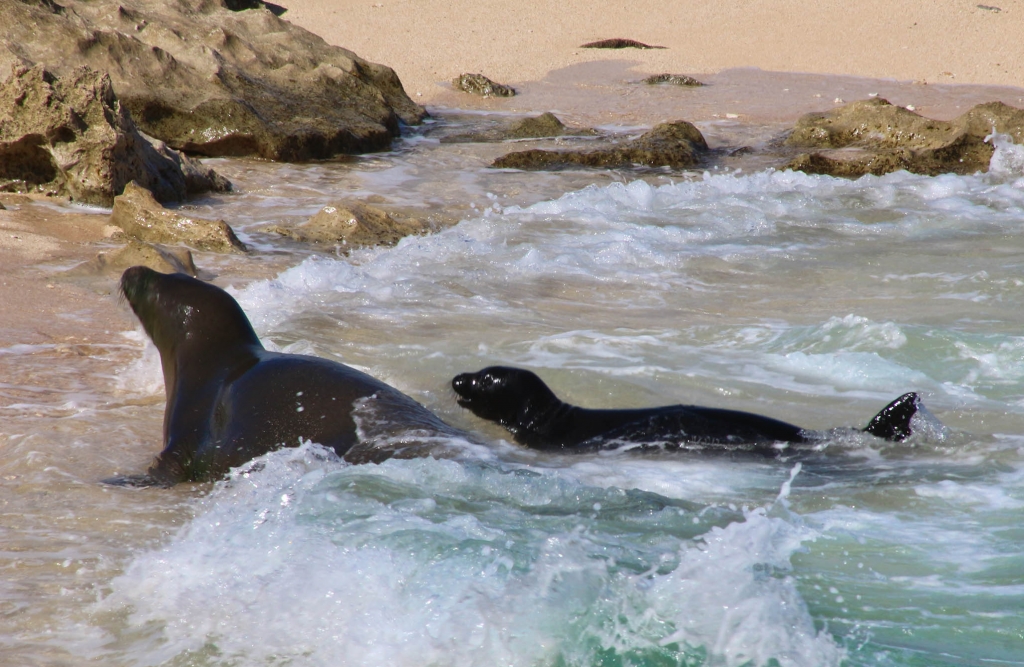 When I returned 2 weeks later on the 24th day after its birth on Saturday March 21, I saw Honeygirl and Ola Loa return from swimming in the ocean.  The Hawaiian name for the monk seal is ʻilio-holo-i-ka-uaua, or “dog that runs in rough water”, an apt description.  Ola Loa had grown even larger and was getting quite chubby.   Mothers take their pups swimming several times a day venturing further out to sea each time and teach the pup how to hunt for food.

Another major threat is declining fishery stocks.  Only 1 in 5 pups born in the Northwest Hawaiian Islands survive to adulthood due to lack of food.  Malnourished pups under a year old have been taken to the monk seal hospital in Kona to be fattened, cared for, and then released.  Fortunately, food is more plentiful in the main Hawaiian Islands so as long as Ola Loa stays in the main islands the outlook is better. 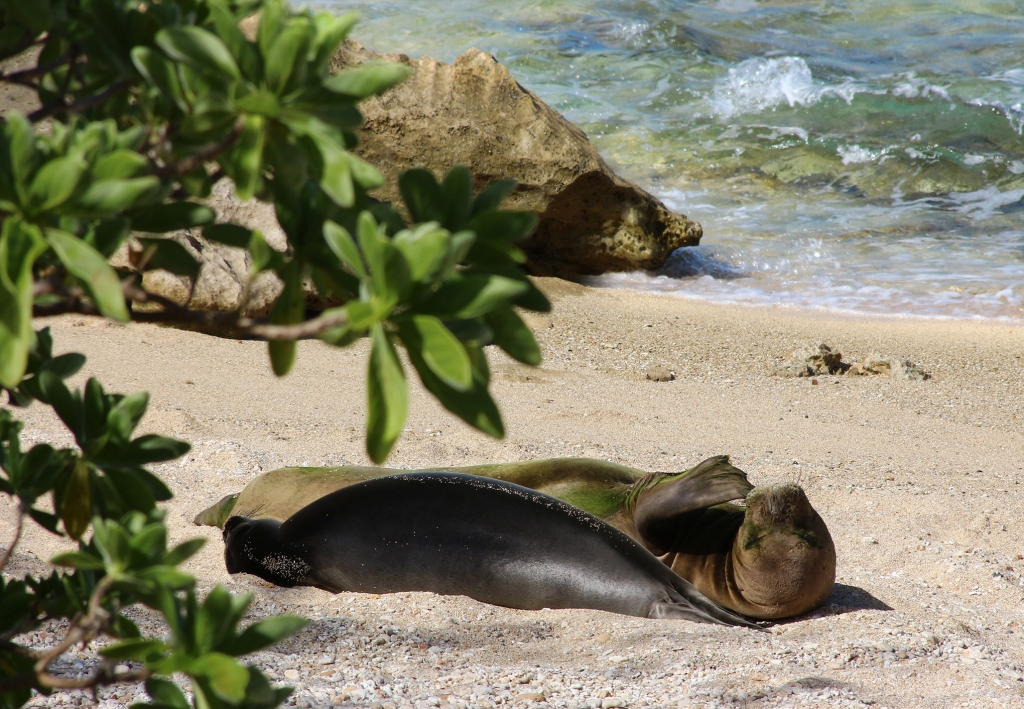 When I returned 3 weeks later on the morning of the 45th day after her birth on Sunday April 12 I was surprised to see how large Ola Loa had grown  and how thin Honeygirl had become.  Mothers do not eat while nursing and Honeygirl’s weight loss was apparent — her spine and other bones had become visible when she lifted herself up.  Mothers usually stay with their pups for about 42 days before leaving them for good weaning them off milk.  Ola Loa had been fattened from her mother’s milk and had grown round and chubby.

When I checked back with the seals in the afternoon Honeygirl was gone!  Honeygirl had become gaunt and it was time for her to leave to start feeding again.  The next year is crucial for Ola Loa — she must learn to forage and fend for herself.  Most year-old pups grow only slightly longer and actually lose some weight from the day they are weaned.  They need their fat stores to make the transition.  I hope Ola Loa grows to be as nubile and fertile as her mother.  We need more baby monk seals!