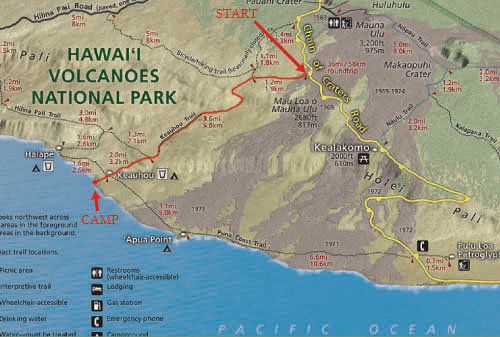 I joined 10 friends for a 3-day backpacking adventure to Keauhou and Halape in the wilderness area of Hawaii Volcanoes National Park (HVNP) along the Kau and Puna coasts of the Big Island.

The day before we arrived in Hilo, my hiking buddy Pete Morton (aka Puna Pete) , who lives on the Big Island, got the camping permits for our trek.  Unfortunately, all the permits for Halape were taken, so we had to fallback to camping both nights at Keauhou.

Our plan was to backpack down the 6.8 mile Keauhou Trail (marked in red on the map above) and camp for 2 nights at the site of the old Keauhou Landing.  On the second day we would make a 3.2 mile roundtrip to Halape and on the third day we would backpack 9.7 miles on the Puna Coast Trail to return to the Chain of Craters Road at Puu Loa. 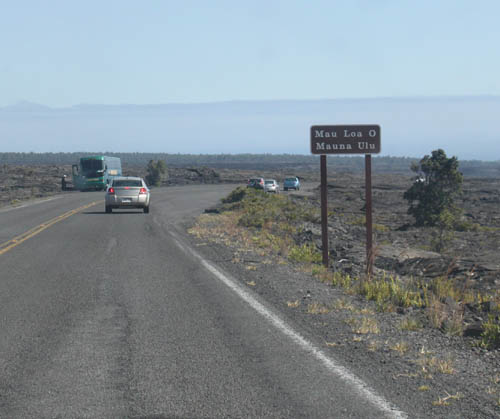 The constrast was stark as we drove down the Chain of Craters Road from green rainforest at Thurston Lava Tube to barren lava fields from the 1974 erruption of Mauna Ulu.  After dropping-off everyone at Mau Loa O Mauna Ulu where the Keauhua Trail begins, we drove down to the coast and staged our van at Puu Loa where we would pull-out the 3rd day. 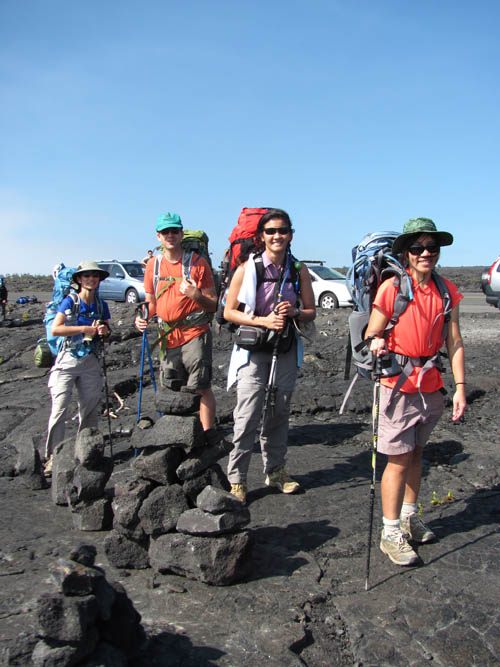 Eager backpackers Cheryl Batangan, Grace Gabriel, Kevin English, and Jennie Chadbourne assemble before the ahu (rock piles) that mark the Keauhou Trail.  Our backpacking trek for the first day would descend 2,680 feet over 6.8 miles of lava fields and grasslands on the Kilauea escarpment to the coast. 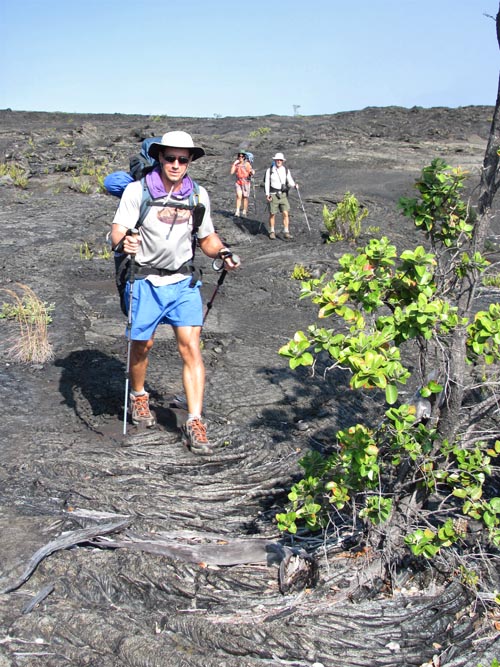 Pete Clines, George Privon and Cheryl Batangan make their way over a pahoehoe lava flow dotted with small ohia trees (Metrosideros polymorpha).  With little vegetation to provide shade, the lava fields bake in the sun and radiate heat.  Backpackers are faced with the real possibility of dehydration, heat exhaustion and sunstroke under the full brunt of the sun.  So we put on lots of sunscreen, wore wide brim hats, and brought 4-liters of water each for this leg of the trek. 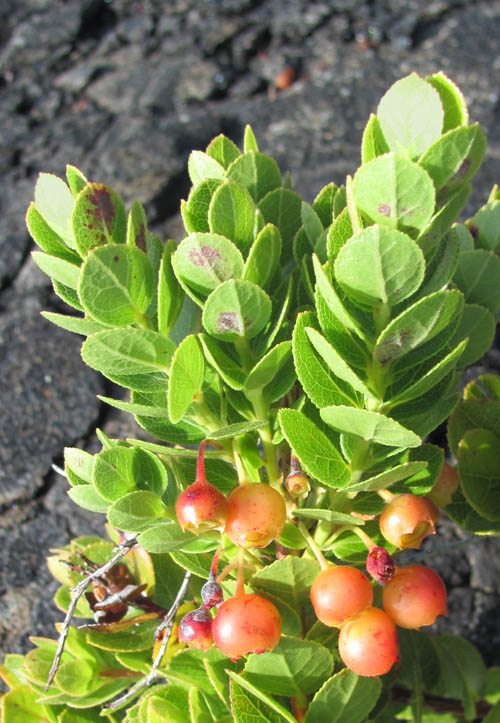 While making our way over the lava fields, we saw juicy ohelo berries (Vaccinium reticulatum). Ohelo are endemic and are one of the first plants to colonize a barren lava flow along with ohia and ferns.  The yellow-orange ohelo berries at Kilauea are different from the red berries on Oahu and taste even better.  It is little wonder that these berries are a favorite food of nene geese. 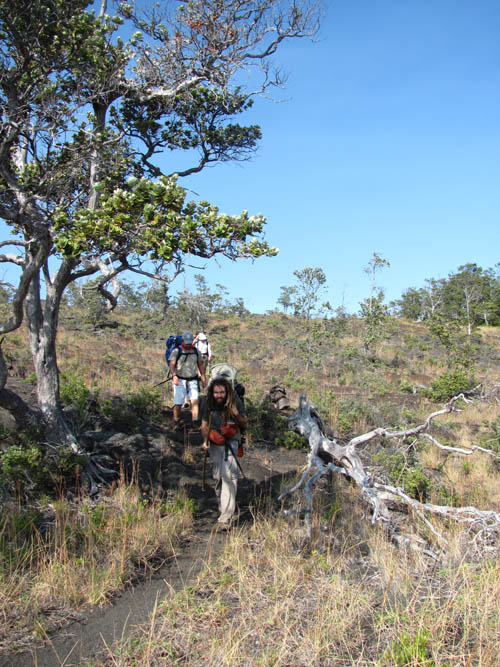 August Smith, Puna Pete and George Privon make their way along the edge of an older lava field where the ohia trees are bigger and where grasses have gained a foothold. 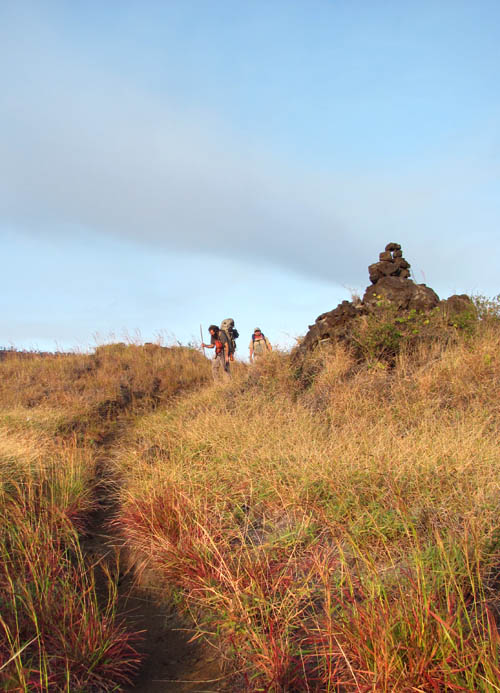 Big Island businessman, William Shipman (brother-in-law of Lorrin A. Thurston), leased the ahupuaa of Keauhou from Bishop Estate in 1921 and transformed the landscape into grasslands for cattle.  When the time came to take the cattle to market, the cattle were rounded-up and herded to the Keauhou Landing where they were loaded onto ships. 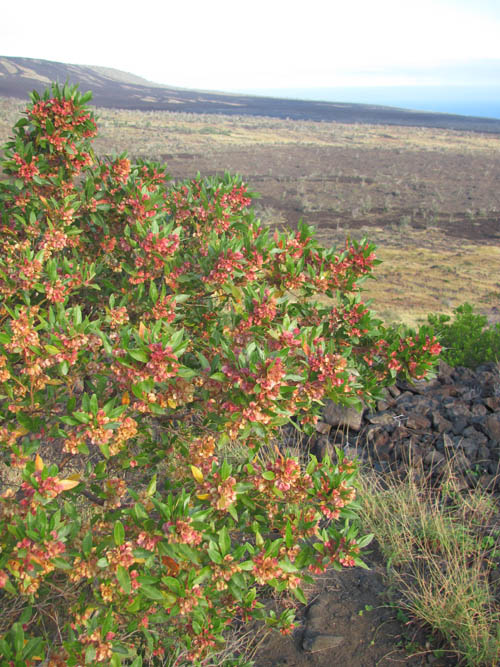 Aalii (Dodonaea viscosa), which is indigenous to Hawaii, thrives along the cattle modified grasslands at Keauhou.  This impressive 8-foot aalii was just covered with red seed capsules.  The red seed capsules of aalii were fashioned into leis and made into a dye for kapa cloth. 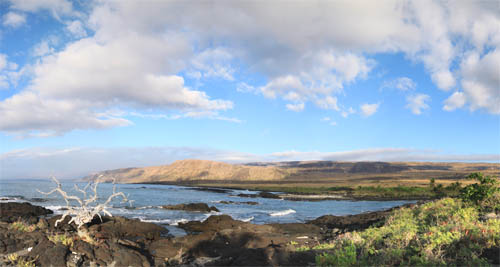 When we finally reached the coast we were pleased to reach the site of the old Keauhou Landing.  Nothing remains of the small settlement which included a pier, warehouse, and other structures.  After falling into decline for decades the landing was completely destroyed by the Kalapana earthquake and tsunami of 1975. 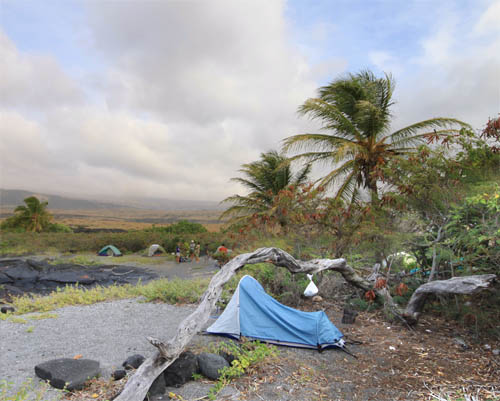 With the sun beginning to set, we selected a sandy beach for our campsite overlooking a rocky cove with brackish ponds where cold fresh water seeps to the surface and mixes with the ocean.  Our campsite bustled with activity as we set up our tents, made dinner, and prepared for the evening. 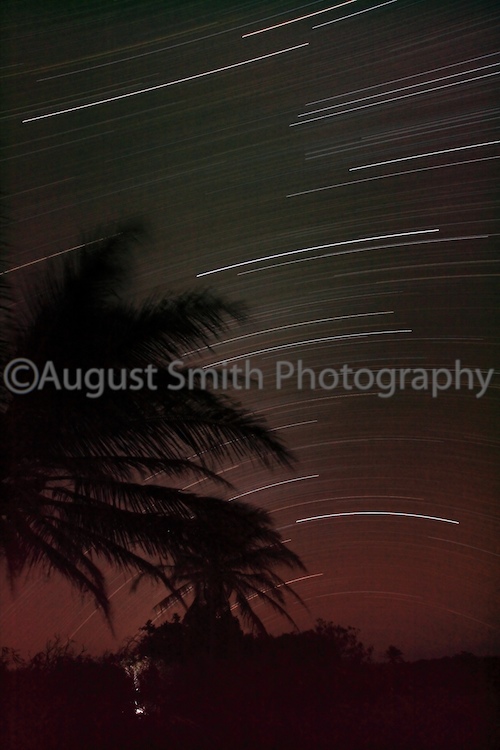 Darkness descended after dinner and we took turns telling entertaining stories about each other — the more embarassing the better.  The darkness was complete and we could see countless stars in the heavens.  August, the consummate photographer, set up his camera on a tripod and took a 2-hour exposure to capture the movement of the stars as the earth rotates. What an awesome image of star trails! 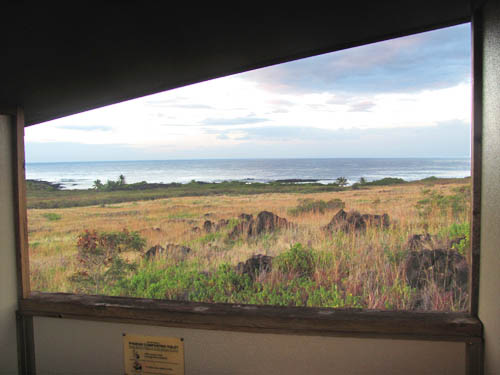 Early the next morning I made my way up about a third of a mile up to the Keauhou Shelter where the water catchment system and outhouse is located.  The outhouse is elevated and provides a good platform to view the coastline and surrounding area. 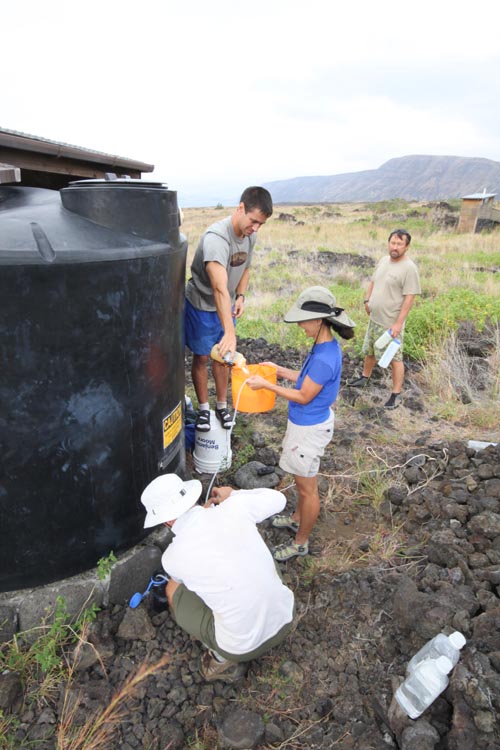 Since the spigot of the water tank was broken — inoperable since November 2009 — we had to open the tank cover on top to get water.  Pete lowered a container into the tank with string and filled a bucket held by Jennie from which George filtered the water. 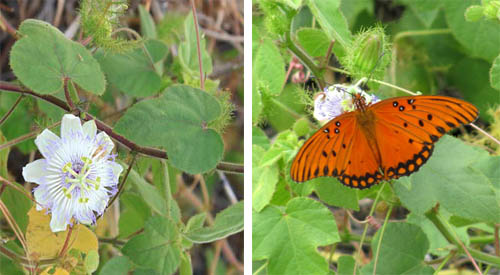 The shelter was surrounded by introduced lilikoi (passion fruit) vines close to the ground.  Gulf Frittilary Butterflies (Agraulis vanillae), whose caterpillars feed exclusively on passion fruit vines, fluttered over the landscape from flower to flower. 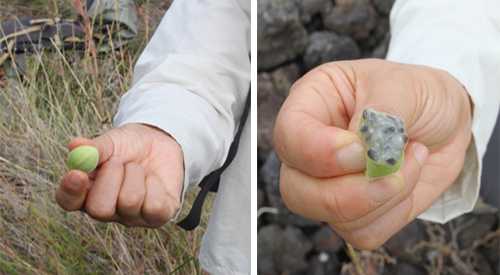 The lilikoi fruits were an unexpected treat.  Miyo figured out the best way to eat them.  Tear a small hole in the skin of the fruit and squeeze the seeds out.  The seeds are surrounded by a membrane containing a most delicious pulp. 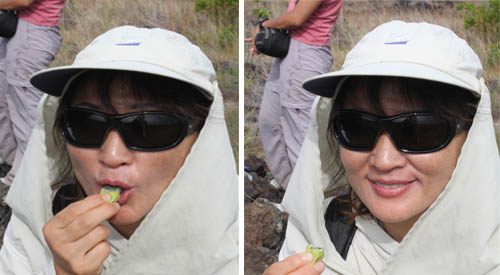 Just slurp up the pulp and chew — seeds and all!  What a burst of flavor — sweetness, tartness, and acidity all at the same time!  The fruits were so good that several of us spent quite some time foraging for lilikoi before pushing off to visit Halape for the day.

Stay tuned for the next installment where we hike further along the Kau Coast to Halape.  This is the second of four posts about our backpacking trek.  The first post is here.