ʻAkoko Planthopper in the Koʻolau Mountains 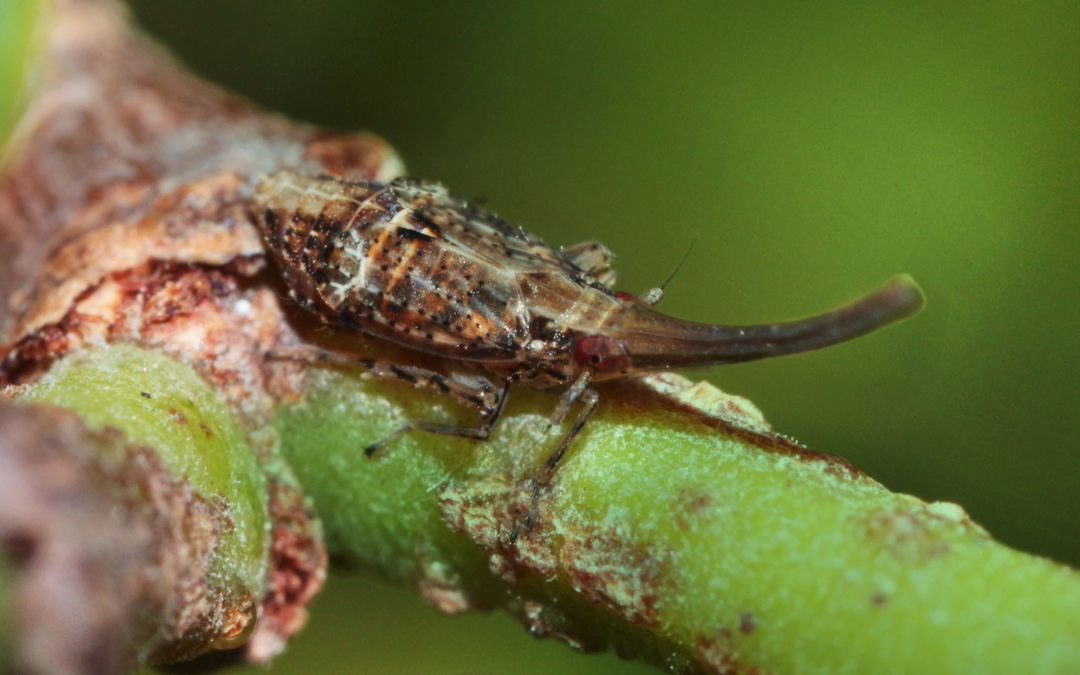 One of the oddest native Hawaiian insects is the ʻakoko planthopper which has a distinctive nose almost as long as the bug itself. 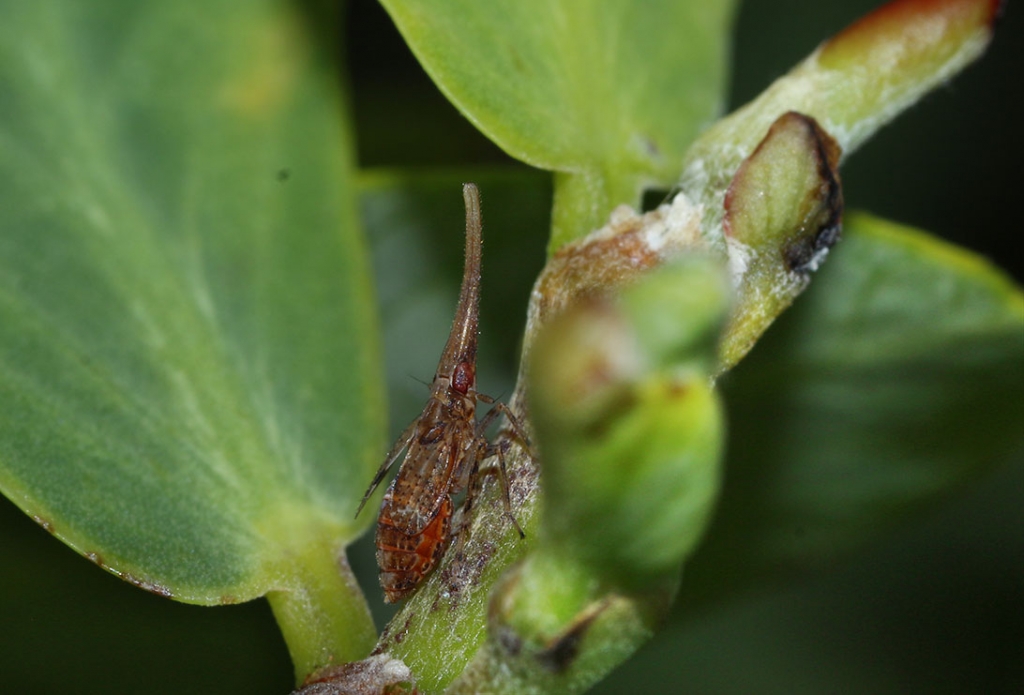 The tiny winged creature — Dictyophorodelphax swezeyi —  is about 5 mm long — slightly larger than an ant.  The insect is endemic to the Hawaiian Islands and is believed to have evolved from a delphacid leafhopper that found its way to the archipelago eons ago.  The tiny bug evolved a long cephalic horn on its head unique among delphacid leafhoppers in the world. 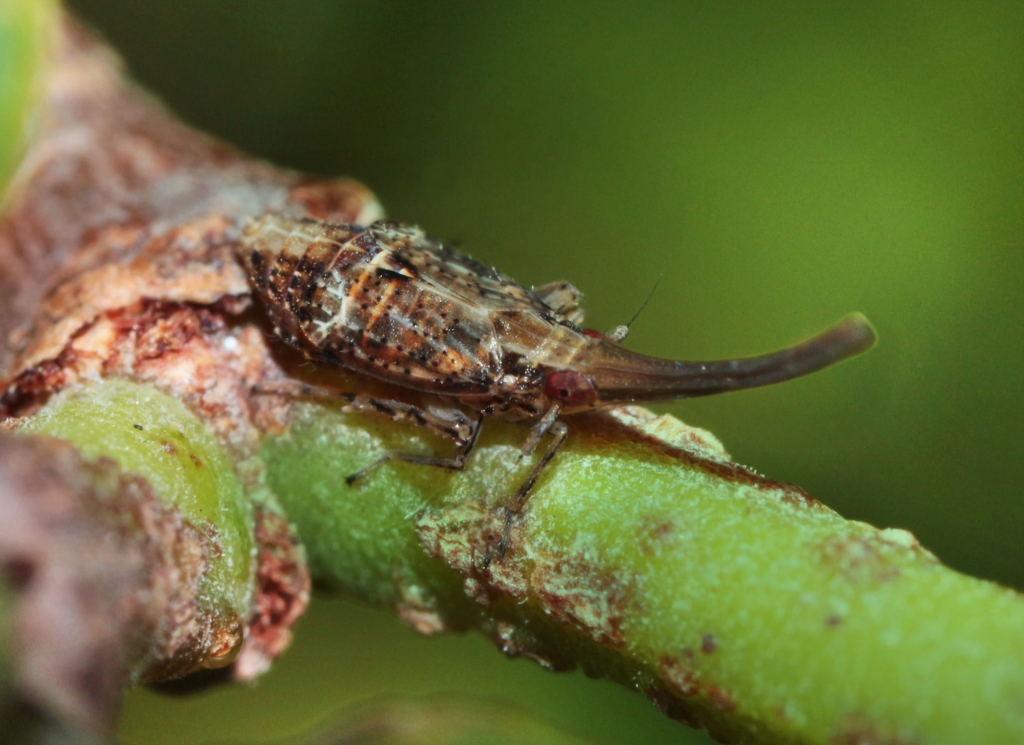 The genus Dictyophorodelphax was first described by Otto Herman Swezey in 1907 — for whom the bug is named.  Swezey founded the Hawaiian Entomology Society in 1905 and discovered a host of endemic insects.  In subsequent years more species and sub-species have been described — each of which is endemic to a single island. 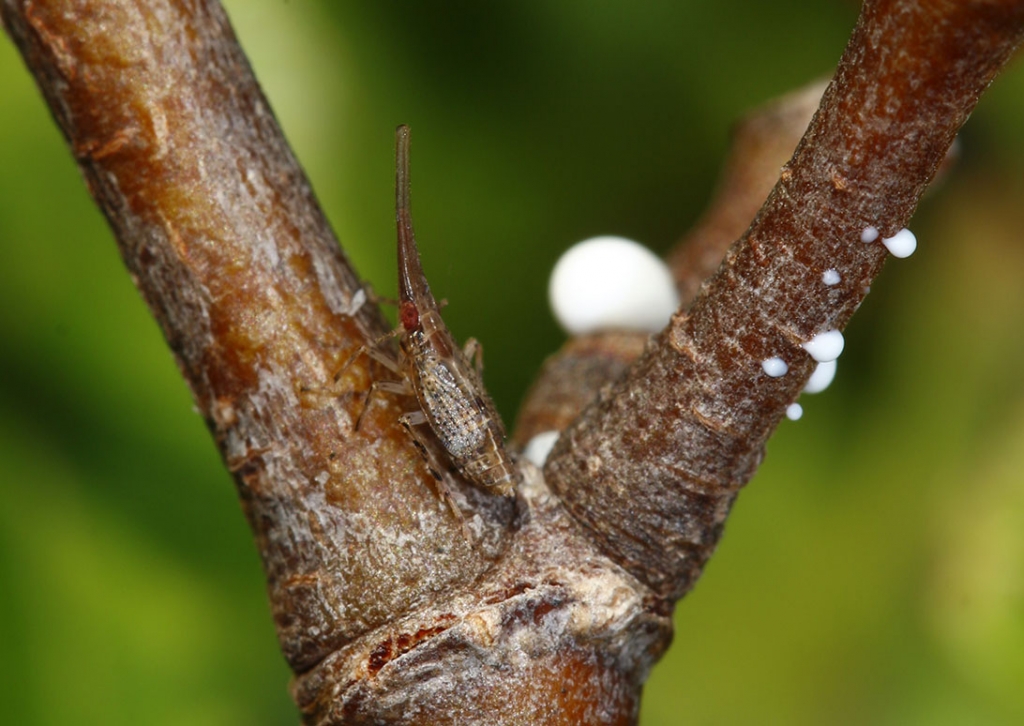 The ʻakoko planthopper feeds on the sap of ʻakoko — Chamaecyce sp. — which produces a milky white sap that is caustic and poisonous.  The  food canal of the planthopper extends into its “nose” and is thought to be used either to detoxify the sap or to possibly store it to discourage predators.  A Hawaiian name has been coined for this creature — ʻūmiʻi ʻakoko — ʻūmiʻi means “to pierce” and ʻakoko is the host plant of the insect. 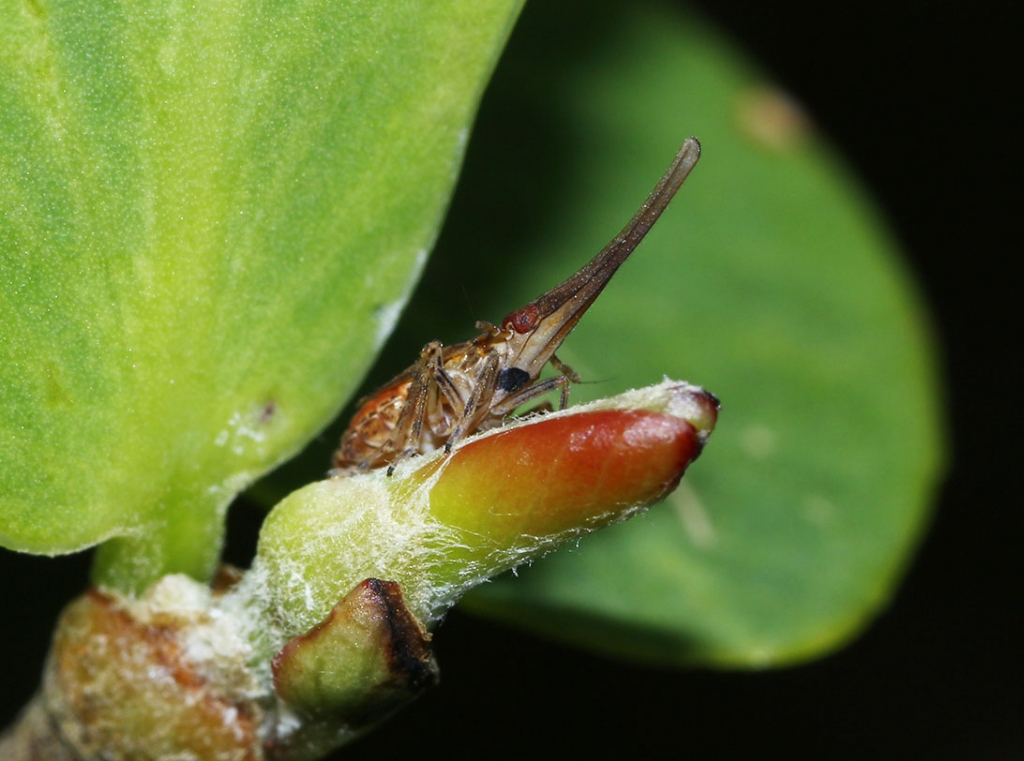 Curiously, it is not the long nose that does the piercing and sucking.  It is the rostrum or beak found on the underside of the creature — the black area under the eyes — that punctures the plant and sucks the sap.  One of the unusual things about ʻūmiʻi ʻakoko are the feelers it has under its eyes.  It has a distinctive set of appendages that protrude from either side under its eyes with a feeler on the end.  How odd is that! 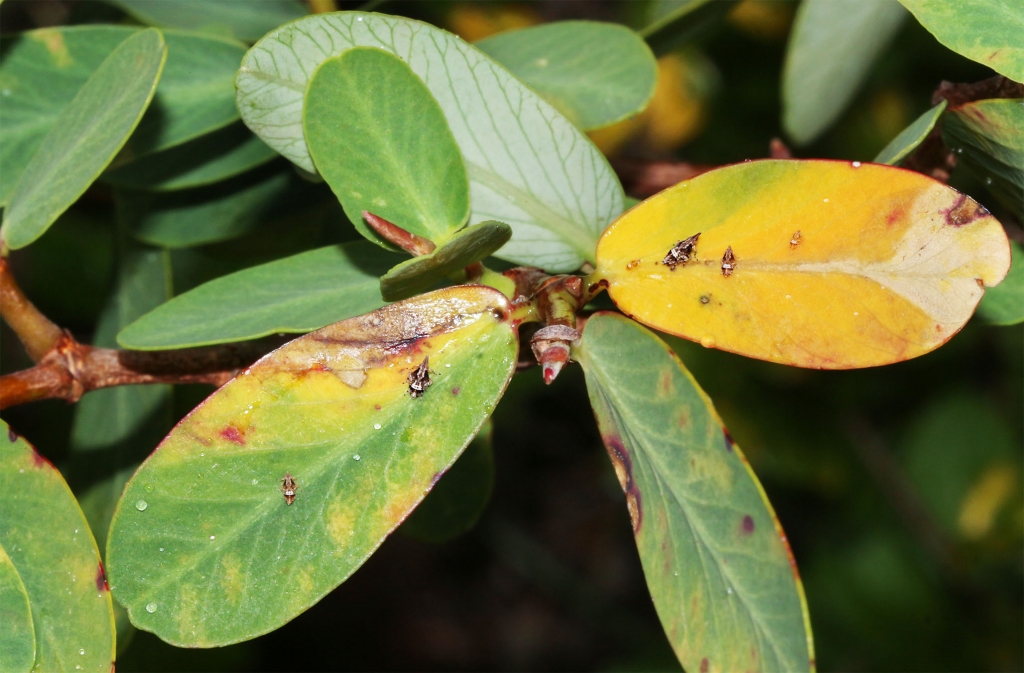 The ʻakoko planthopper is tiny — about 5 mm in length including the horn.  And its juveniles are even tinier.  There are 6 juvenile plant hoppers in the photo above.  Each of the ʻakoko leaves are just under an inch long. 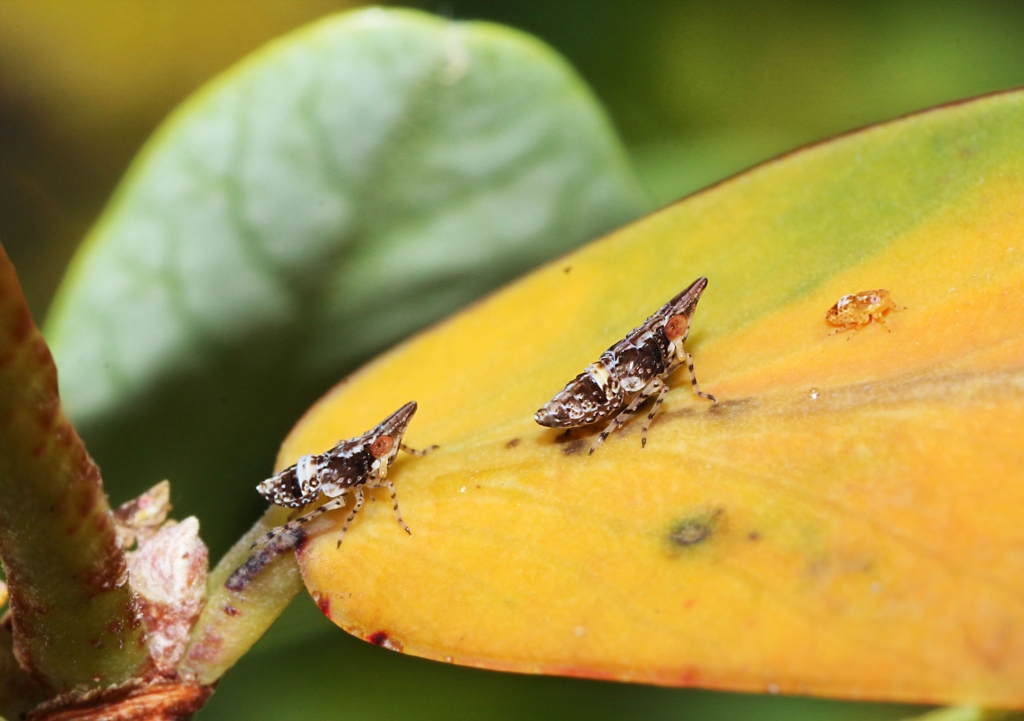 Babies hatch without any cephalic horn.  The horn on the head increases in size as the insect molts. 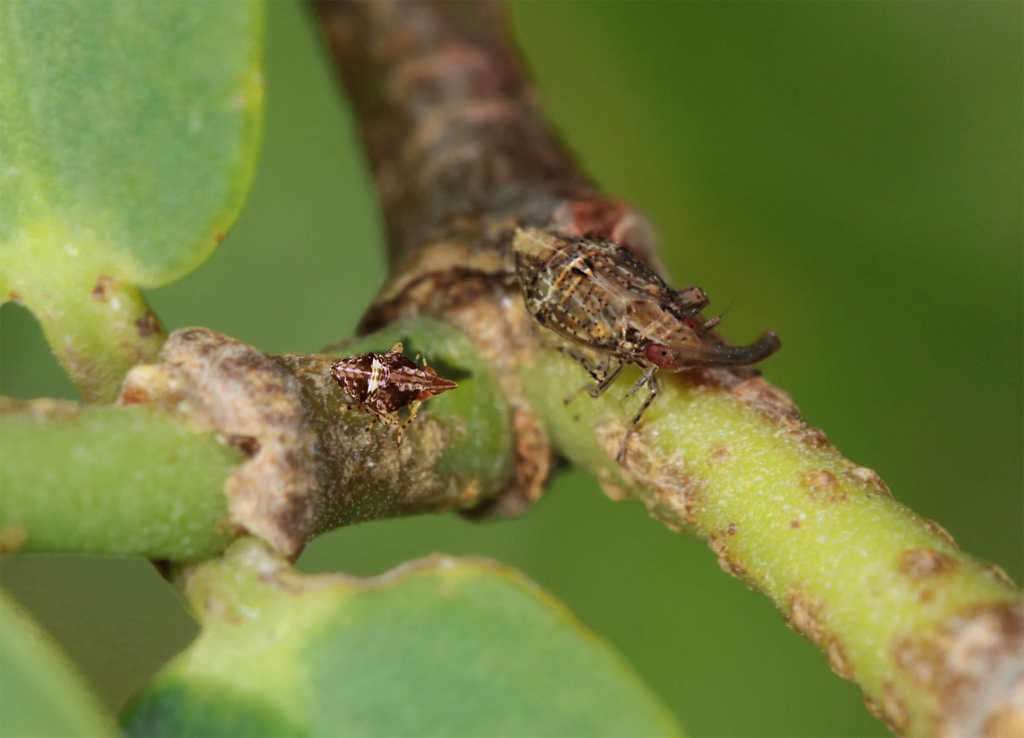 Among the 6 known species/sub-species of ʻakoko planthopper, the shape, angle of curve, and relative size of the cephalic horn seems to be one of the defining characteristics.  What a fascinating little creature!

Personal Communication with Betsy Gagne, Division of Forestry and Wildlife, Department of Land and Natural Resources, State of Hawaii