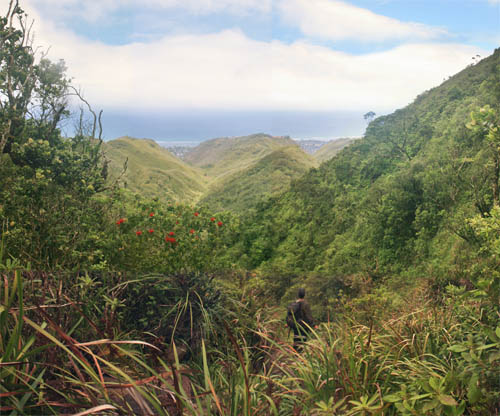 I hiked with Joel Lau, Botanist and Rare Species Specialist, to look for Achatinella fuscobasis — a critically endangered species of Oahu Tree Snail — on the leeward-facing upper slopes of the southern Koolau.

About 5 years ago while looking for rare plants, Joel Lau discovered a population of rare tree snails — Achatinella fuscobasis — not previously known to have survived in this part of the Koolau Mountains. Known as kahuli, pupu kani oe, or pupu kuahiwi in Hawaiian, these tree snails were once common. Unfortunately, of the forty or so species that once existed — all which are endemic only to the island of Oahu — a mere 10 species remain today and all of them are critically endangered. Predation by rats and carnivorous snails have decimated their numbers and their populations continue to diminish year after year.

While hiking to our destination, I found it difficult to contain my excitement at the thought of seeing fuscobasis tree snails for the first time. I had heard so much about them from Kenji Suzuki who frequently accompanies Joel on adventures to remote areas of Oahu to look for rare species.

For several hours after reaching the site, we looked for tree snails behind each and every tree leaf on the mountain slopes where they were previously found. Much to my disappointment we were unable to find a single adult tree snail.  I was disheartened to discover that several trees that once contained a dozen tree snails were now snail-less. 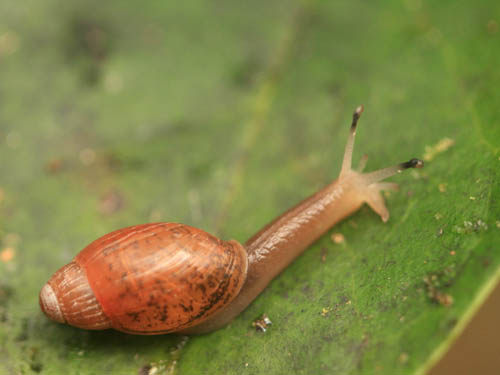 Our worst fears were confirmed when I found a carnivorous wolf snail, Euglandina rosea (shown in the photo above) about an inch long, hunting for tree snails on a mehame tree. This predator is able to follow the slime trail of tree snails to deadly conclusion. With these efficient hunters lurking in the trees it is little wonder that this population of fuscobasis tree snails is in serious decline.

After resuming our search and inspecting each and every leaf and branch on a mid-sized kamakahala tree I was thrilled when Joel finally found two cute little fuscobasis tree snails, one of which was crawling about in midday!  Since they usually sleep on the underside of leaves during the day it was with great excitement that I took the photos below! 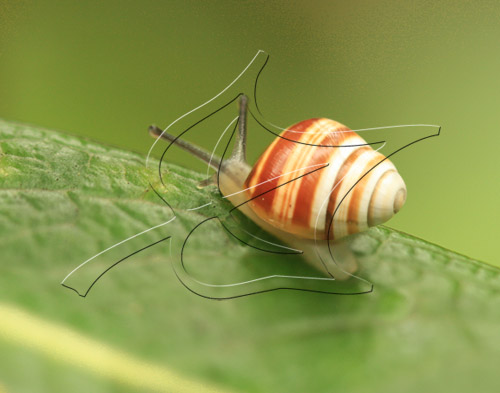 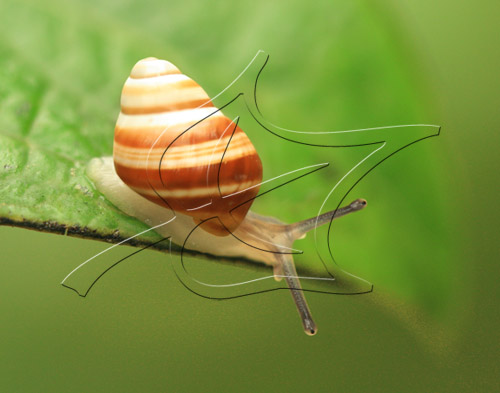 The shells of these juvenile fuscobasis snails were a striking creamy white in color with reddish sienna stripes that spiraled up the spire of the shell. 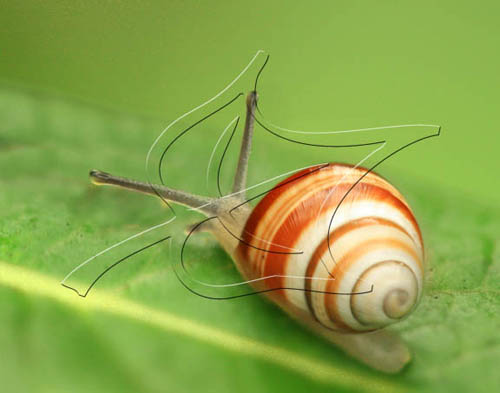 Achatinella tree snails do not eat the leaves of the host trees they inhabit. Instead they graze on algae and fungi that grow on tree leaves. Unlike other snails they bare a single live offspring instead of laying eggs.

While I was pleased to have seen and photographed these Achatinella fuscobasis snails for the first time, it was with heavy heart that I left the southern Koolau with the knowledge that this population of fuscobasis tree snails is in serious decline. These precious little snails are only found in a handful of places on Oahu and are teetering on the brink of extinction.

To see more photos of Achatinella snails see my previous blog articles about the kahuli at (1) Poamoho (2) Pahole and Kahanahaiki and (3) Honouliuli Preserve.